I’m hoping to slowly but steadily catch up to the present here. Still really behind. This blog will cover my time from Pearisburg to Rockfish Gap.

It actually seemed like spring when we left Pearisburg.  It was great. There were flowers and green stuff everywhere. It all dwindled back down to brown again as we climbed up into the mountains, but still. 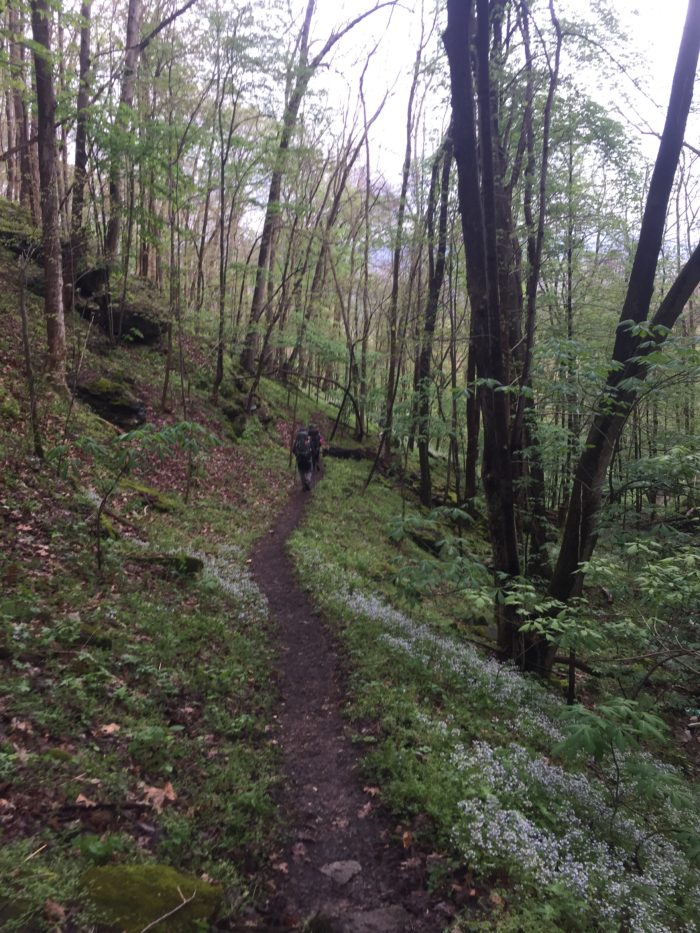 There really isn’t anything that exciting in the 600s on the AT. The coolest thing I saw between Pearisburg and McAfee Knob/Dragon’s Tooth was the Keffer Oak, which is the largest tree on the AT in the South. Not even the largest overall. It’s still really fricking big, though. 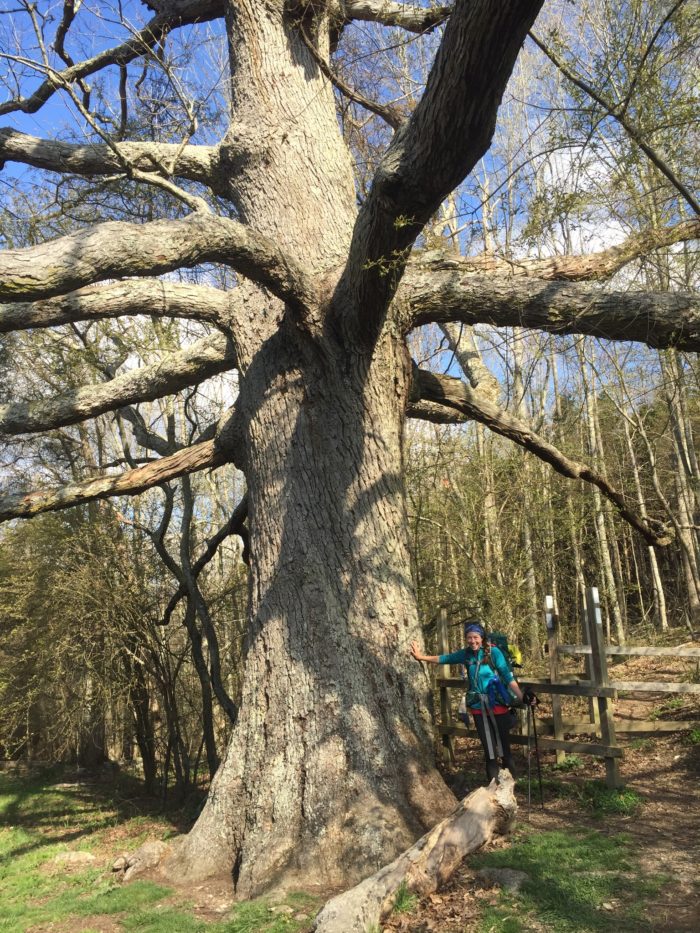 This may have been the most exciting moment of my whole day.

Mostly we were excited to get to mile 700 and McAfee Knob. It’s one of those places that you see over and over when you start looking into doing a thru-hike. Everyone has this awesome picture of themselves dangling off the side of this attractive rock outcropping. So it was a big milestone to finally reach this iconic AT moment.

And then it caught on fire.

So we wake up on what we believe to be McAfee Knob day, and we’re all excited because the last few days have been exhausting. We had started pushing more 20-mile days, and the weather had decided to get better. I guess? And be sunny, but also 90 degrees, which takes a lot out of you. It’s hard to stay hydrated. But we set off that morning full of enthusiasm for this big day. 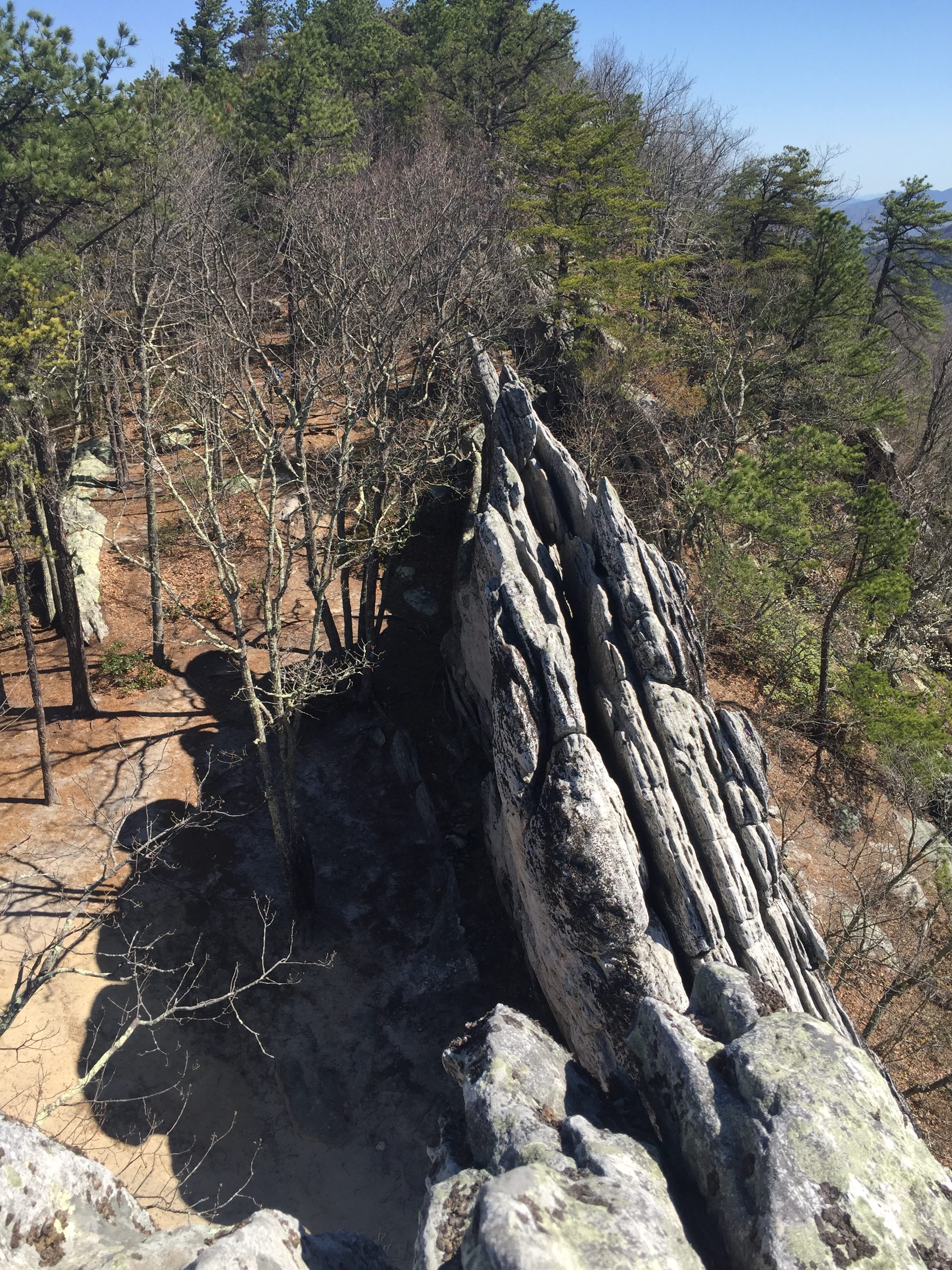 View from the top of the Tooth.

I got to Dragon’s Tooth pretty early in the day and naturally decided to climb on top of it to eat my snack. Then I had to get down, which was less fun than getting up. I made it; the only casualty was the cap to my Smartwater bottle, which I threw off the top because I didn’t want to be holding on to it and trying to climb down this thing. Then I started down the trail heading north from Dragon’s Tooth, which is so rocky and steep that it really shouldn’t be considered hiking. It was somewhere around here that I heard that the trail to McAfee Knob was closed. 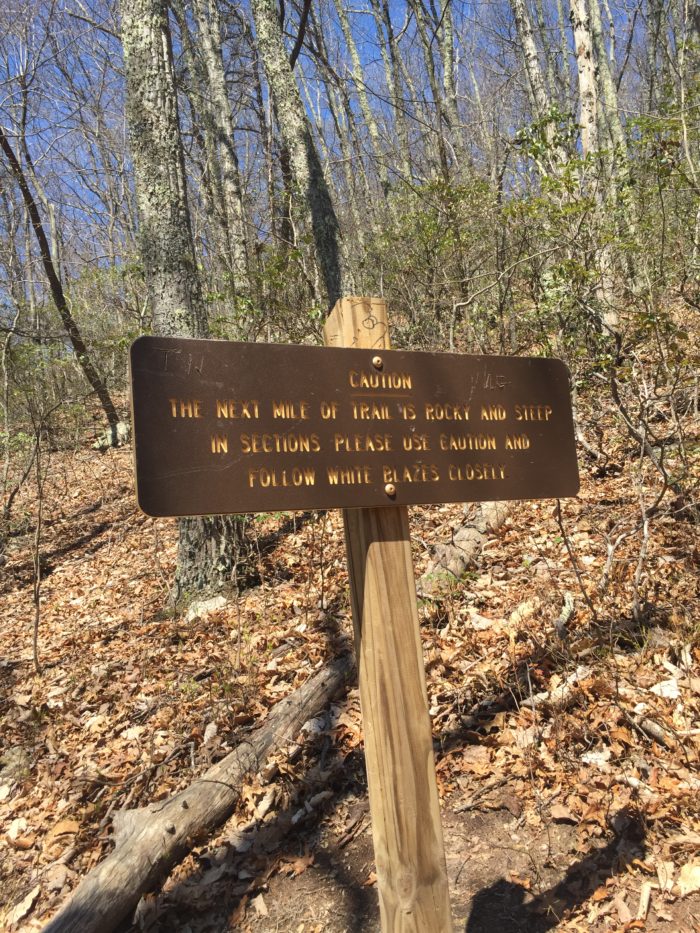 Later in the day I met up with Buck and Robin, who confirmed that they had also heard that the trail was closed because of a brush fire, and we had no idea what we were supposed to do. First off, I was devastated. Of all the goddamn days in the entire season for the trail to be on fire, it had to be this day? And this mountain? If it was any other section of trail I would have said fuck it and kept going. But I really wanted to see this specific mountain! I wanted my picture at the most photographed place on the AT!

We ended up catching a ride to Daleville, skipping nearly 20 miles of trail, and assessing our options.

Our options: wait or keep going.  We got to Daleville late in the day, and by 8 p.m. basically all we had accomplished was buying new shoes and eating barbecue, so we zeroed the next day. We also hoped that we could wait out the fire. In the meantime, we watched a lot of TV. 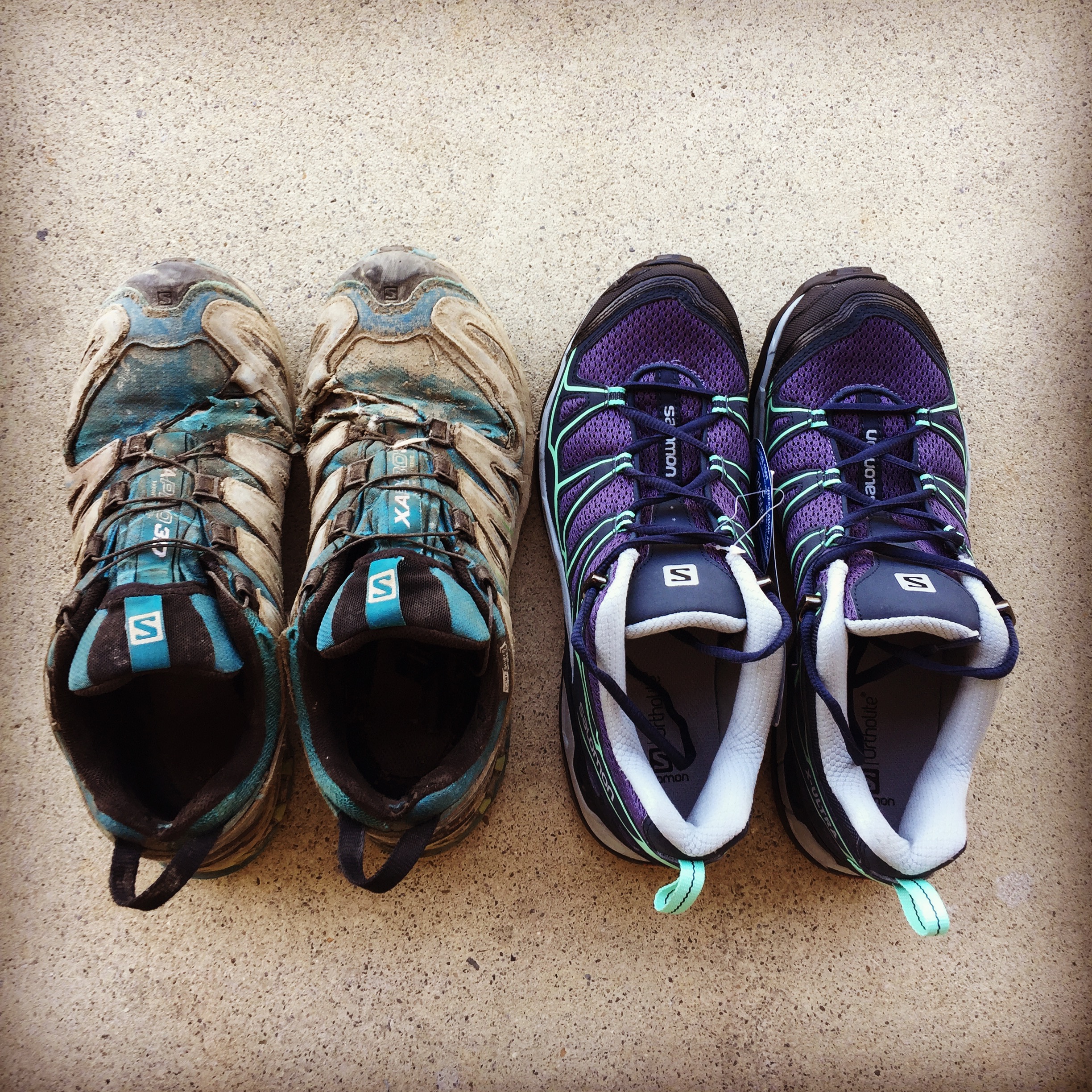 My old shoes were getting rough. These don’t even have holes!

After obsessively checking several local news outlets, the AT subreddit, the ATC website, and the AT Facebook, we finally found one source that said the trail was reopening the morning after our zero. Hooray! New plan: we hike south from Daleville, catching the 20 miles we missed, including McAfee Knob and Tinker Cliffs. Then we get a shuttle back to Daleville and continue on. 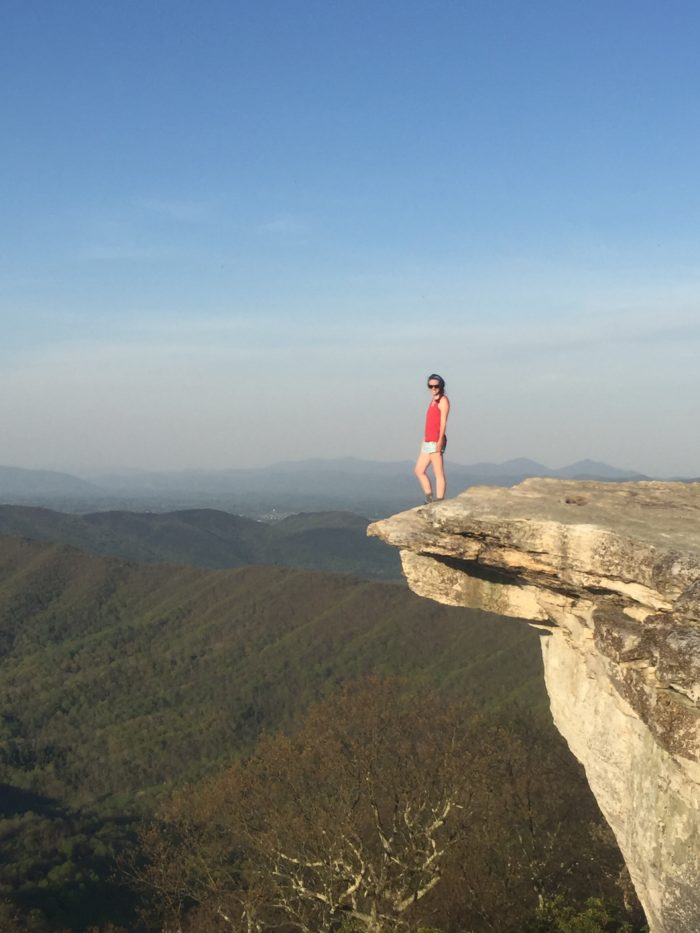 So I did eventually get to see McAfee Knob.

It was just way more stressful and complicated than it should have been. We got there around 7 p.m. at the end of a long, hot day and had the mountain pretty much to ourselves.  Great! Now we can move on. We had a few good days of Virginia hiking where it continued to be hot and sunny. I started to think maybe Virginia wasn’t completely terrible. I mean, it’s not that bad. I was really looking forward to Virginia but the first two weeks or so really weren’t great.

We had our first real hitchhiking experience trying to get in and out of Glasgow.

It took us over an hour to get a ride. We eventually told Buck to go hide in the bushes to see if it helped to just have two girls trying to catch a ride. The second car after that stopped for us. We spent an eventful car ride down to Glasgow with this nice young couple that was super stoned, and decided it was worth the $5 to call a shuttle to get back to the trail. Glasgow is also where we were introduced to this fabulous TV show that’s like “House Hunters” but with RVs. 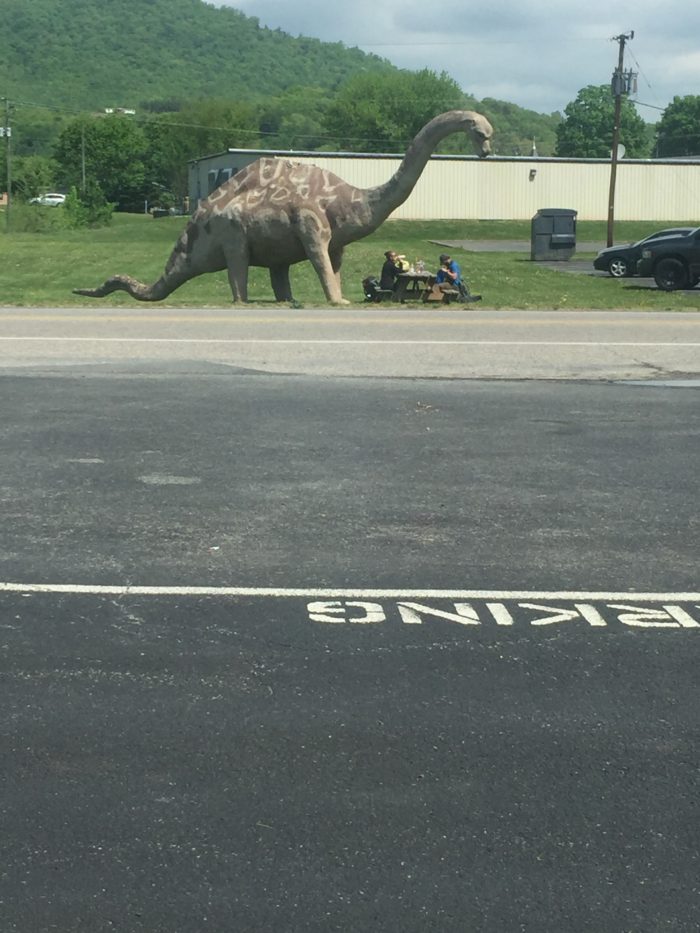 Buck and Robin sorting through their resupply with this great dinosaur.

Next stop: the beer!

I was super excited to make it to this brewery. Devils Backbone Brewing is a few miles off trail, and is a sprawling complex with a restaurant, gardens, and a place to camp. My boyfriend and former roommate came to visit, and it was tons of fun to hang out in the beautiful weather and drink. Basically just like home! I woke up pretty hungover the next morning at the brewery, and we got our $5 hiker breakfast and free T-shirts. In order to keep up with everyone and make things more convenient, I slackpacked (hiking without your pack) the 19 miles from the brewery to Rockfish Gap, despite the hangover. Slackpacking is great – it’s the first time I had done it, and I finished the 19 miles in less than seven hours, which is quite a bit faster than I expected. I was super motivated because once I was done, I got to shower for the first time since Daleville (ten days earlier). That was the most glorious shower. I think I was in there for at least half an hour and still didn’t feel entirely clean.

Kicking it in Charlottesville

I spent the next couple of days with my friend and boyfriend in Charlottesville, about a 45-minute drive from the trail. I had never been to Charlottesville before. It’s a super cute little city. It’s the home of the University of Virginia, and is full of great restaurants and bookstores. I ate some vegetables for the first time in a while, and got to indulge my craving for an overpriced, fancy cocktail. I spent a lot of my zero walking around the campus.  So much walking. And I got to spend time with two of my favorite people. 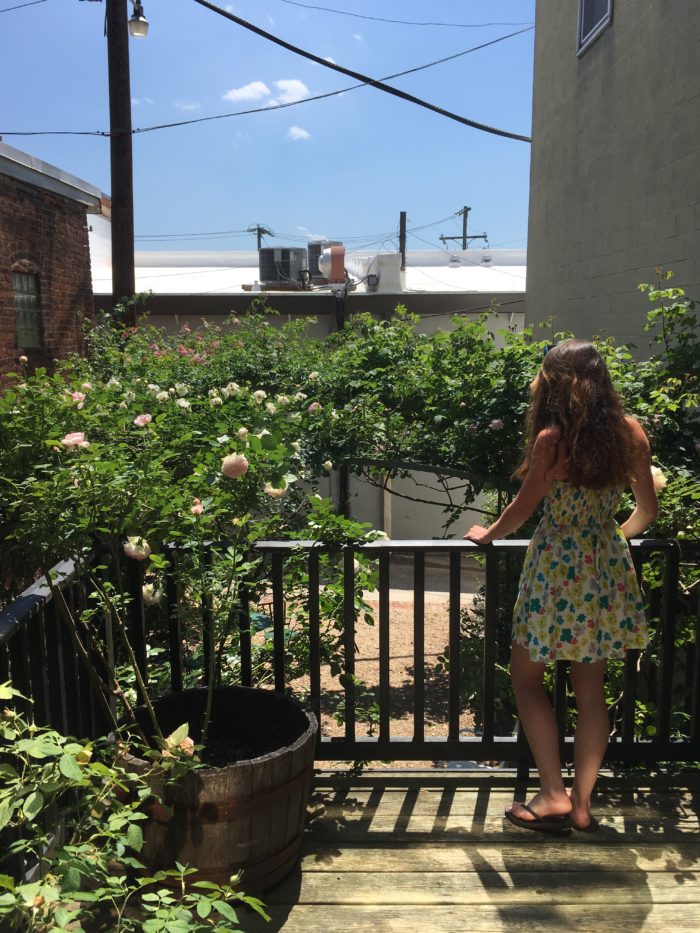 You wouldn’t believe how exciting it is to have more than one outfit to choose from.

And then it was time to say goodbye and return to the trail. Up next, Shenandoah. 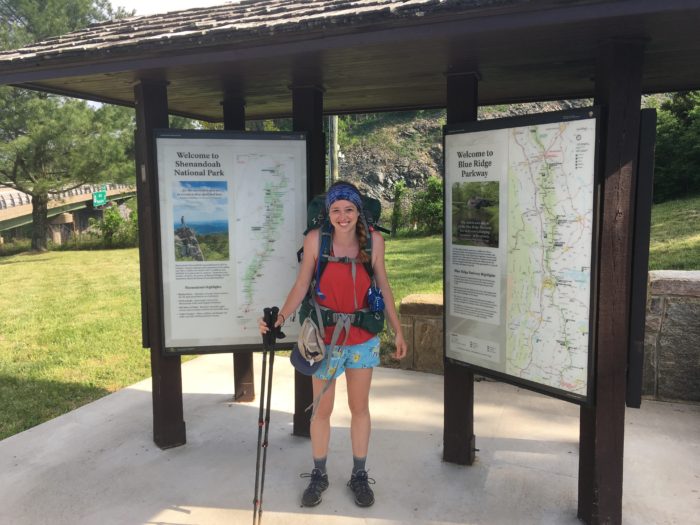