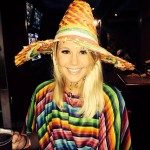 5/19/14
Total trip miles: 394.7
Finally made it back to the trail after trail days! We woke at Solitude’s friend Matt’s house. He’s starting the trail in Maine as a Southbound hiker in I think July. Boone was awesome. Matt was so cool and nice for letting all ten of us stay at his place for so long. Trail days was great too, but I was so ready to be back on the trail. Good to be home. We went to play at Compression Falls near Boone before heading back to the trail. There was a really steep incline to get back to the car and I thought I was going to throw up. I was sweating and winded, and cramping up, and I don’t think I had more than a glass of water in the 5 days off trail. When I was 9 I did my first triathlon. I did the swimming, my mom biked, and my sister ran. After I finished my swim I ran out of the water, fell down on my hands and knees, and threw up. That’s how I felt on this hill. Time away from the trail was not kind to me. After the falls Solitude and Matt dropped Swiper, Bear Claw, and Me off where we left before trail days and dropped the rest of the group about 10 miles ahead of us where they left off. It was really nice hiking with just the girls. They weren’t hard to keep up with like the boys are, we could pee wherever, change clothes out in the open, and have girl talk. 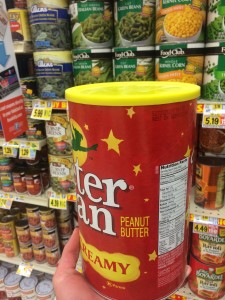 85 servings of peanut butter. Food City in Damascus got the hook up. 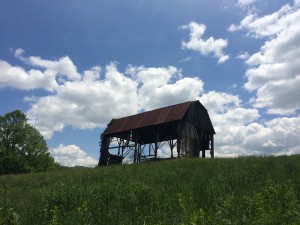 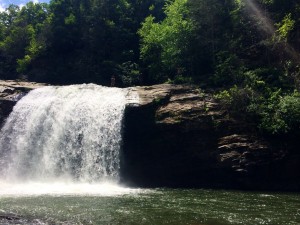 Compression Falls. If you look closely you can see Solitude at the top. 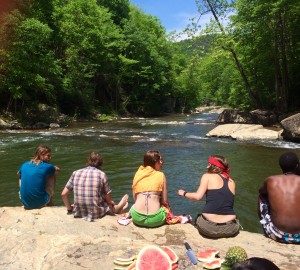 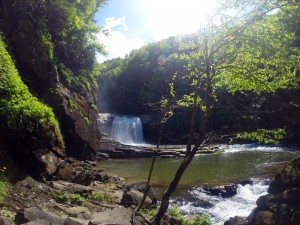 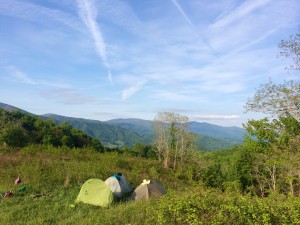 Swiper, Bear Claw, and I camping close together because…we can. 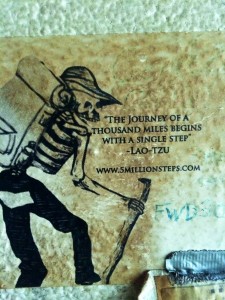 5/21/14
Moreland Gap Shelter to Camp Spot
Days miles: 16.3
Total trip miles: 427
Today was a plot twist day. It started out just like any other. I left Bear Claw and Swiper behind and started hiking around 11:00am. I planned to stop in Hampton, TN to pick up a package from home with my original shoe inserts inside. The foot pain from the new insert on my right foot is out of control. I hitch hiked in with no problem. I’m good at hitch hiking. A nice man named Steven with a dog named William picked me up. We talked about the bars (bears pronounced bars) on the way to the Post Office. I stopped by the Dollar General (DG) to pick up a few things. While I was sorting my package outside, a man came up and talked to me about the usual things; hiking and weather. After he left, another man walked up and said “Don’t listen to anything that guy says. He’s full of $#!+.” He said he hoped I was carrying a gun and to be careful around here. Inside the DG, a woman told me basically the same thing. Be safe in this area. I got an uneasy feeling that the town was sketchy because nobody seemed to trust anybody else and started getting kind of nervous about getting back to the trail. From there I walked to Subway. Someone honked at me and I waved. It looked like Brother Nature was in the passengers seat, but it couldn’t be him. He was a whole day ahead of me. The car made a U-Turn and pulled into the Subway parking lot. Not only was it Brother Nature, but also Hendrix, Bear Claw, and Swiper. They said “Get in, we’re going to the beach.” We really went to Watuga Lake, but there was a sandy beach area there. I went for a swim across the lake to get my fitness on since I skipped 10 or so miles of hiking. It was glorious. After I swam, I took a ‘shower’ in the sink. This was no easy task as it was a shallow push faucet sink, so I could only get a few seconds of water at a time. There were some white trash people playing in the water there that were just kinda rude and obnoxious and yelling to each other really loud next to us on the beach. Everyone in my group was drinking (except me-I was feeling like I had enough alcohol for a while after Damascus), grilling hot dogs, having a great time, and the police showed up. Walks with Whiskey had been playing with a sling shot shooting it into the water and the trashy people called the cops. I’m not entirely sure what happened while the cops were there. This went down while I was in the shower. They basically said no alcohol and left. Then the trashy people left a little while later and the police came back. They wanted to make sure the trashy people didn’t give us any trouble. It turns out we were in the meth capital of the United States. Probably the world if that’s the case. The police man told us they busted 47 labs this year and 3 of those were just that morning. They made national news earlier this month for busting a superlab where they found meth but also 300 gallons of urine that tested positive for meth. Apparently you can filter it back through drano, the urine chrysalises, and you can break it up and use it. He said when someone is tweaking real bad in jail, they have to separate them from the other meth heads because the other meth heads will eat the scabs off of the person. Meth is creepy! The cop followed up with “You shoulda been here 3 years ago when we were going through our bath salts epidemic. It was even better than the meth epidemic. A man picked me up with one arm and threw me across the hood of my car. I broke his arm and he still kept coming after me.” Awesome. I hitch hiked alone in the Meth Capital of the world. Mom and Dad, I’m thankful for the life you’ve given me and I’ll be safer. We hiked in about a mile from the lake. There have been some serious bear issues in the area. One of the shelter logs was filled with reports of bears. Apparently the bears have figured out how to get the bear bags down from the bear cables, trees, and bear poles, they are persistent, and they aren’t scared of people. Our friends Doc and Hangry had 3 bears come into camp and attack their food supply a few days ago. I hung a bear bag for the night but I think if a bear wanted to get to it, they could. A huge branch came crashing down and missed me by inches while I was hanging my bear bag. Good times. Oh, and the officer that we talked to earlier also called bears bars which made me chuckle on the inside. 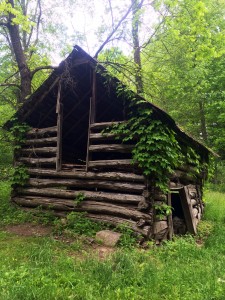 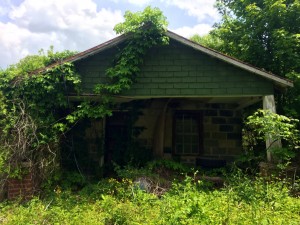 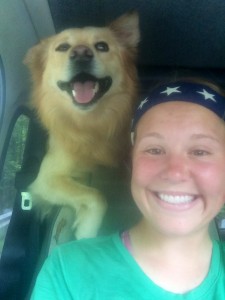 William just checking to make sure everything was okay up ahead. 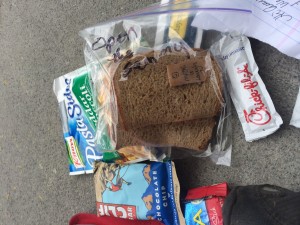 When I did study abroad in Spain I stayed with a host madre who made all of my meals for me. She was an older woman who had just had surgery on her arm. Somehow her dirty bandage that covered her surgery made it’s way into my lunch bag. I pretty much didn’t eat anything of hers after that. My mom sent me a package and look what she packed inside. 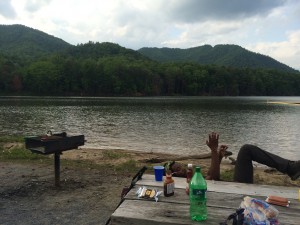 I don’t know what Hendrix is doing, but that’s the lake I swam across. 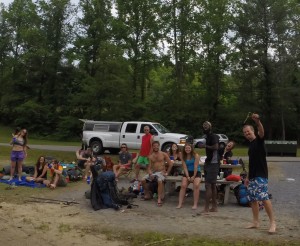 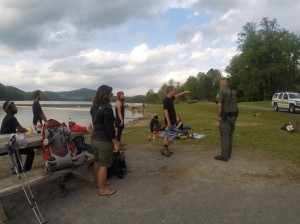 5/22/14
Days miles: 14.3
Total trip miles: 441.3
Sasquatch and Sweeps came by our camp site by the lake in the morning. They were hiking 2 miles back into town to resupply again because bears ate their food. We had planned to stay at the shelter they stayed at but decided not to because there were no camping options. Thank goodness. Joplin got off the trail. She said she’s coming back in a few weeks. We’ll miss her and we hope to see her soon! Jops, you better not lose your trail legs. I night hiked for the first time and I didn’t like it. I was by myself and it was only for three miles. I passed a shelter where a girl got murdered sometime in the past and was like I think I’ll pass on staying here so I hiked to the next one as the sun went down. I was a little scared of bears, more scared of mountain lions after Swiper texted me and said she saw one the other night, and mostly scared of humans. I kept thinking I was going to come across something out of a horror movie. I arrived at camp around 10:00pm completely soaked in sweat and out of breath from frantically walking through the woods like a maniac trying to make it to the shelter. Hendrix, Whiskey, and Rodeo were trying to hang a bear bag (I say trying because Whiskey was in a tree untangling stuff). Hendrix looked at me and said “Are you serious?” I stared at him, sipped water out of my platypus tube, and breathed heavily. I will not be night hiking again any time soon. 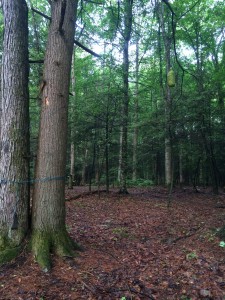 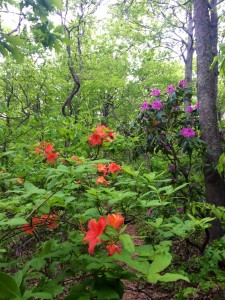 The flowers are blooming! 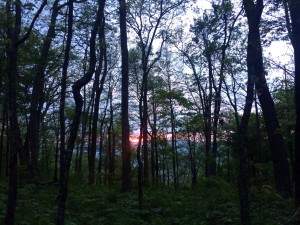 5/23/14
Days miles: 24
Total trip miles: 465.3
I lied. I did 25 miles and night hiked. But not alone this time! We all decided to push about 2 miles away from Damascus so we could get in early the next morning. Solitude, who we hadn’t seen since he dropped us off after trail days, rolled in at 11:50pm, talked really loud as people who we didn’t even know camped nearby and then set off fireworks. He’s quite possibly the only person on the entire trail who could pull that off without making anyone mad. 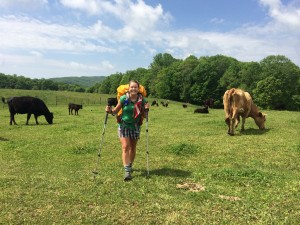 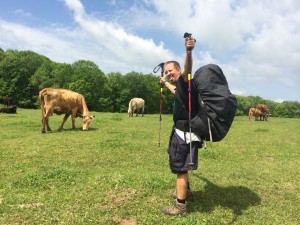 Whiskey with the cows 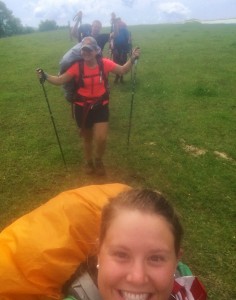 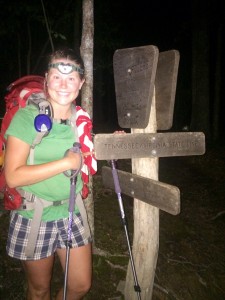 5/24/14
Days miles: 11.5
Total trip miles: 476.8
Mom and dad came to visit! I waited for them at Crazy Larry’s while Crazy Larry did my laundry. Crazy Larry dips and he has a trashcan that he spits into. It’s full of spit and dip. I plugged my phone into the charger, and as I was plugging it in, it slipped out of my hands, bounced off the arm of the chair, and tumbled straight into Crazy Larry’s dip spit. It was an experience that I would not like to repeat. It was really good to see my parents. I hadn’t seen them since they dropped me off at Springer. We met up, did lunch in Damascus, and then Dad hiked 4 miles with me to the first shelter and camped. 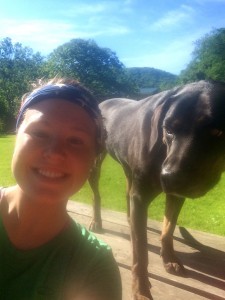 This dog came over snarling and growling at me. Then it decided to hop on the picnic table and take selfies. 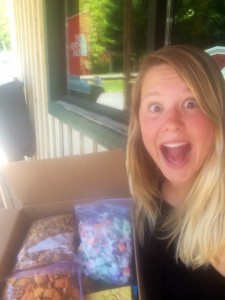 A package from Grandma Lorraine. Thank you Grandma! I started eating it right after this picture, couldn’t wait. 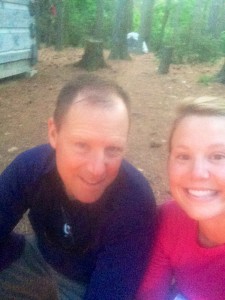 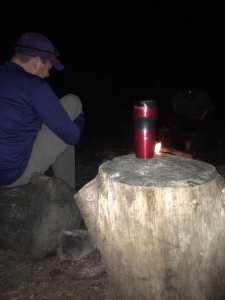