The Appalachian Trail, at the very minimum, can be described as a series of ups and downs. The same can be said for the toll it takes on your emotions. Sometimes you’re up, sometimes you’re down, and sometimes you just want to throw in the towel! 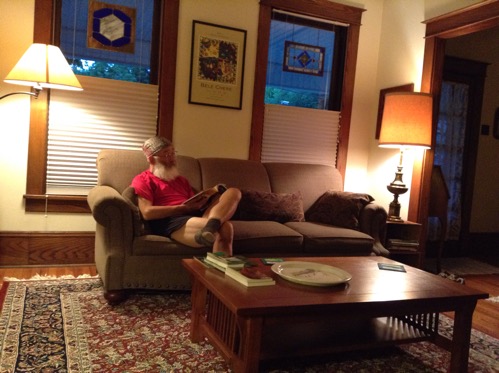 Enjoying our creature comforts at the lovely Hikers Inn in Damascus, VA

The very first day out of Damascus, I reached one of those low points. We had just spent a pleasant two days relaxing in air conditioned comfort and eating our fill of yummy food. It was hard to start hiking again, as it often is, after a day or two of creature comforts. 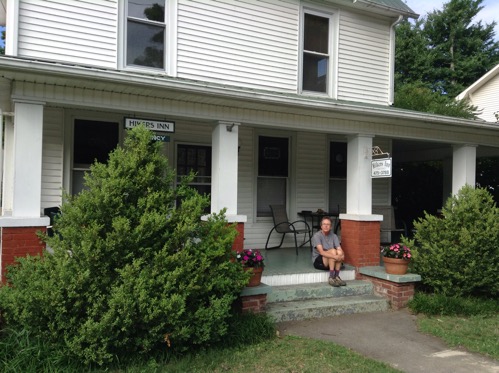 To make our departure from civilization even more challenging, it was hot and humid and we were hiking uphill most of the day. In no time at all, we were both sweating like the proverbial pig. Plus, my feet were killing me AND the gnats were trying to set up housekeeping in my eyes! It was miserable to say the least. 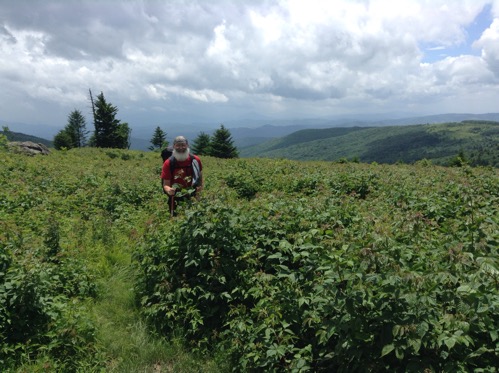 hot, humid days through the hills and fields

Our second day out wasn’t much better. Again, it was hot and humid and mostly uphill. I have never sweat so much in my life! Mel, in turn, was so wet that he looked as if he had just stepped out of a hot shower with all of his clothes on! Not fun! 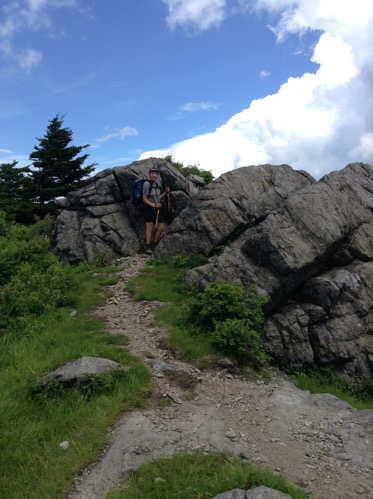 For the first time since we began this adventure, I really started to question why I was even out here. I certainly didn’t need to “find myself”, and I certainly didn’t have anything to prove–except maybe to myself that I could complete a thru hike as a 68 year old. But the heat and humidity were sucking the life out of me! 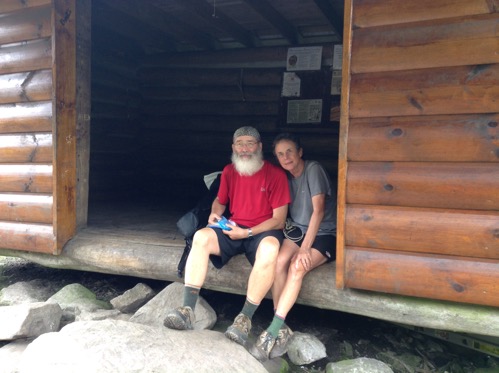 Taking a few minutes to relax at Thomas Knob Shelter

On our second night out, after setting up our tent, we hung up our stinky wet clothes to dry. Ha! It rained most of the night and our clothes were even wetter than when we had undressed the night before! Putting on wet stinky clothes in the morning makes it very difficult to face the day with joy! 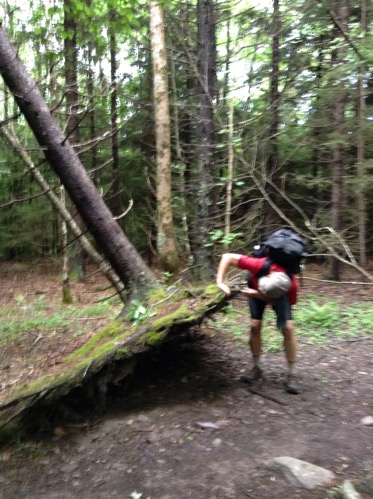 Looking for a shady place to rest?

The one redeeming feature of those first two days back on the trail, was the firefly display we got to enjoy as we laid awake in our tent looking out into the darkest of nights. It was magical! The fireflies seemed so much bigger and so much brighter than they do at home–but maybe that’s because a night in the mountains is so much blacker than a night in the city. 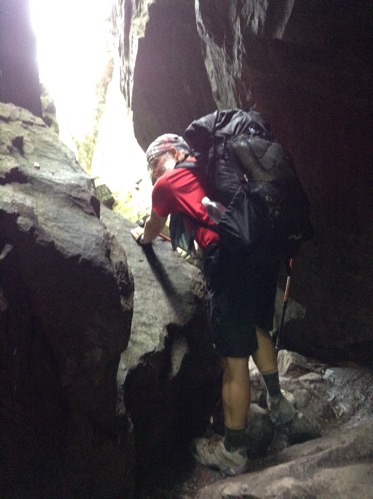 Will he fit through the Lemon Squeezer?

By our third day out, I was starting to recover from my ‘funk’. The weather was cooler and the walking not as strenuous. Plus, this was the day I’d finally get to meet the wild ponies in the Grayson Highlands!
We came across the ponies much sooner than expected. As soon as I got my camera out, one of the ponies came hustling towards me and started licking my arm! I knew from Mel’s stories that the ponies liked licking salt off of sweaty hikers, so I wasn’t totally surprised. But what unsettled me was the nibbling! I wasn’t sure if the nibbling would turn to biting so I tried to ease myself away–but the ponies followed! 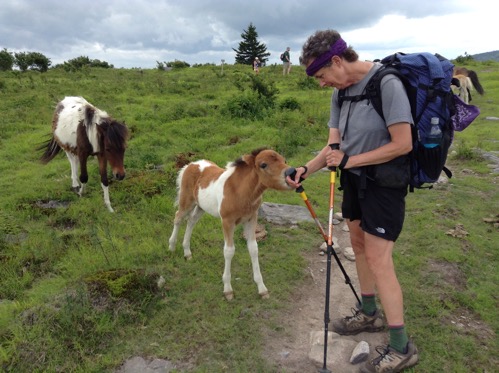 Eventually, I was able to extricate myself and go take a few pictures of Mel being licked (sounds sort of kinky, doesn’t it?) The same gray pony who had come after me was now licking Mel. Pretty soon, another pony joined in the licking and Mel was entwined in a little love triangle of sorts. Suddenly, the gray pony decided to kick the tan one for moving in on his territory and then the tan one kicked back. Mel, the tasty love interest, narrowly avoided a kick of his own and quickly abandoned his lickers. 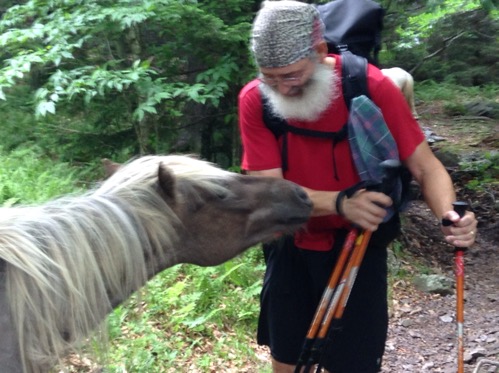 A very salty Backfire has quite an ardent licker on his hands!

The visit with the ponies was one of the ‘ups’ on this roller coaster ride! Unfortunately, it soon was followed by another ‘down’. After leaving the ponies, we were caught in a cold, torrential rain that was accompanied by high, blustery winds. There was barely enough time to get our rain jackets on before the clouds totally let loose and the trail became a river of mud flowing over the tops of our shoes. I was walkig as fast as I could just to stay warm, but the wind and the rain were conspiring agaist me for almost a hour. Fortunately, when we got to our tent site, the rain had abated and we had just enough time to set up our little home away from home and cook a quick meal before it started all over again! 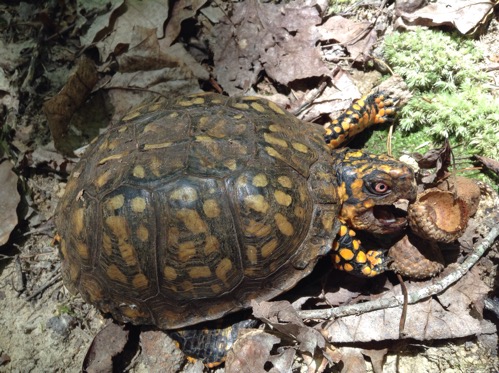 Even the turtles were moving faster than we were in this heat!

In the morning, we once more had to put on wet clothing as well as wet shoes and socks! Ewww! Thank goodness the day was pleasantly mild and the clothes eventually dried out as we wore them. But they did not smell pretty! 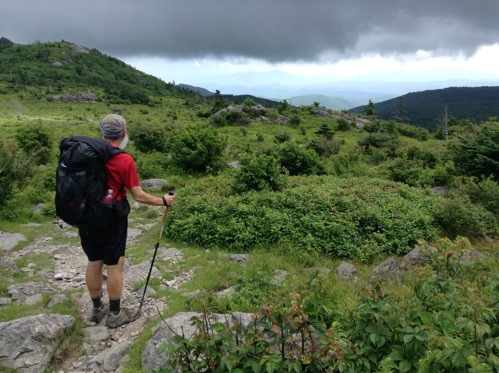 We arrived at our destination shelter early in the day and decided there was time to hike for another hour or two. As we headed out, though, around 5:30, there was the faint sound of thunder in the distance–but the skies were still blue overhead! Sometimes storms blow over and sometimes they don’t. We hedged our bets that they would blow over and then continued with “Plan A”–to keep hiking. Plan A turned out to be a bad idea. Shortly into our ill-fated walk, it started to rain. We walked for hours in the rain and there were no campsites to be found! By 8:30, it was dark enough to need headlamps –and still no campsites! Finally, by 9:30, after walking an additional 7 miles, for a grand total of 17, we finally found a place to camp!
The only good news about that long, wet night was, we only had twelve more miles to walk the next day to get into town-a day earlier than planned! It was the fastest 12 miles we have ever walked as we tried to catch the last shuttle into Marion–and we made it with 15 minutes to spare! 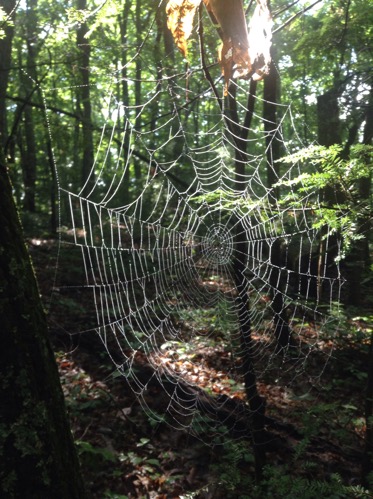 a beautiful spider web along the way

Three days of walking in wet clothes and wet socks has made our bodies quite moldy and our feet very angry. Time for a rest! 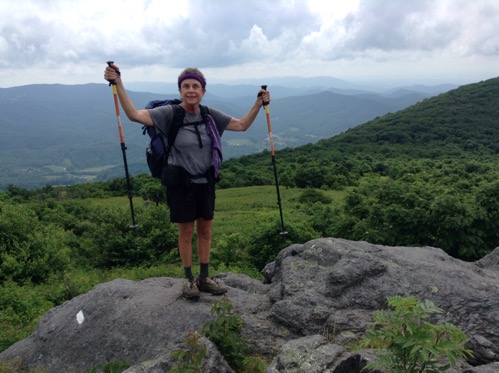 taking the ups with the downs!

So, those are just a few of the ups ad downs of long distance hiking. Some days are so incredibly hard you just want to quit, other days you stand on the top of a mountain and see beautiful vistas all around or walk through a lush, green field of grass and get licked by a herd wild ponies! 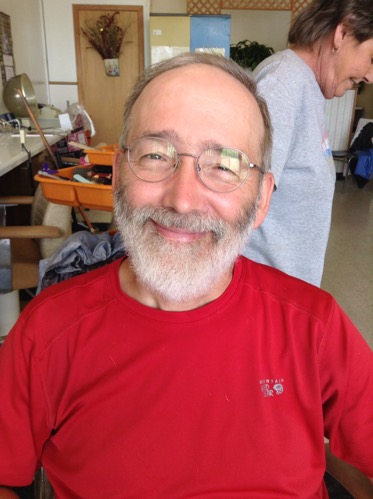 The new Backfire after a beard cut in Marion, VA!

From the Spider Diaries