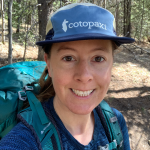 In my second last day in the Whites, I got caught in a thunderstorm on top of a mountain. Thunderstorms had been predicted, and failed to eventuate, two days earlier that same week, so I figured I needed to just get out there. With less than 2 kms until a road crossing, the thunder arrived and the heavens opened. It was a pretty stressful trip down, especially carrying lightning sticks (aka trekking poles). I hadn’t intended on going back into town that day, but in the conditions it seemed like the right plan. I rang a local hostel and to my luck, they had one bed left (thanks Old Colony Ski Club).

Saying goodbye to the Whites

With dry clothes and a sleep in a bed, it was time for my last peak of the Whites, Mt Moussilauke. This was a tricky climb up next to a waterfall, and then a more gradual climb to the summit. There were no views to be had due to thick fog, but it was very satisfying to be done. I had hiked up with two day hikers from Massachusetts and stopped to take a break with them. They offered me a peanut butter and jelly sandwich which, as an Aussie, I had never tried before. They were very keen to see a first experience of a “pb&j” sandwich. It was essentially like eating a slightly fruity peanut butter sandwich. Not too bad!

The climb down Mt Moussilauke was much more relaxed than the climb up, and with that, the Whites were over. The change in the amount of elevation and trail itself was dramatic. Rather than steep climbs up and down boulders, it was suddenly more relaxed climbs up dirt paths! My knees in particular were very pleased by this change.

The smaller mountains of southern New Hampshire have continued into Vermont. There are still some decent climbs and descents, but nothing like what I had experienced in the previous 5-6 weeks. Vermont has also introduced walking through fields into the day, which has been lovely. There is also a greater feeling of being near to civilisation, with farm houses, barns and roads in view from the trail. I even got to enjoy a homemade blueberry and peach pie from a farm stand for lunch one day. This is a bit of an adjustment, particularly after the remoteness of Maine and New Hampshire, but brings a fun new element to my days.

With the flatter terrain, I have also managed to up my kilometres, going from about 12-15km days to 20-25km days. The section of the trail in Vermont is similar to that of New Hampshire (240km vs 260km) but with the increased rate of travel, I should pass through this state at a much faster pace.

Vermont is known as the Green Mountain state, and it is definitely living up to its name so far. There is however a hint of autumn in the days and nights. Fall (Autumn) on the east coast is meant to be beautiful so I am looking forward to the change in the leaves.

Aussie gal taking the SOBO route on the Appalachian Trail from July 2022! Lawyer/runner/cyclist/triathlete/animal friend/lover of the outdoors dedicating myself to this full-time hiking business :)