Damascus and the Grayson Highlands

AT hikers tend to believe that because the trail runs through town, combined with the annual gathering of Trail Days, Damascus has a particular orientation. This, however, is not the whole story. 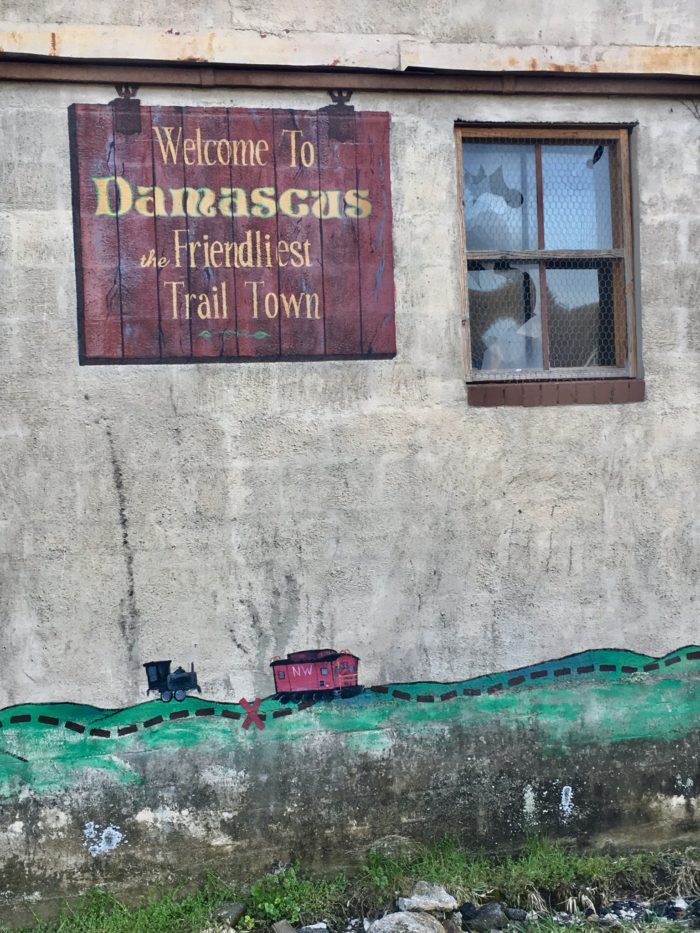 There are numerous trails intersecting the city from the Virginia Creeper Trail to the TransAmerica bike route and a host of others featured throughout the Mount Rogers National Recreation Area. All things considered, I believe it’s the B&Bs and the patronage of the weekend cyclists that give Damascus its character. Through observation, there are more places serving cyclists than there are hikers.

Damascus is favorably situated to capitalize on the abundance of natural features within the area. Ecotourism is big business and the town has found a way to brand itself as accommodating for outdoor enthusiasts.

I found Damascus to be a friendly community, initially. The well-kept Victorian houses, the green and manicured lawns, the clean sidewalks, and waves from the drivers of passing cars. This is the friendliness of small-town Southern living at work.

But then I had to consider if the warm welcomes coming from the residents on their easy chairs on the porch weren’t saying two things at once. The wave and acknowledgement served as a greeting to Virginia as well as a knowing observance to behave, to mind my manners, and most importantly, to keep off the lawn.

It took nearly all day for me to wander out of the backyard at the hostel where I was staying. Then a few hours in the library, a couple of picnics in the town park, and the torturous walk through town, dragging my feet and wondering if I shouldn’t fork over a couple more bucks for another night at the hostel and a crate full of fried chicken from the supermarket.

After six hours I finally found myself at the intersection of the Virginia Creeper and the AT. I was full of coffee from Mojos, the café at the northern end of town. The caffeinated-induced mania drove me up and away from the Creeper and into the night. 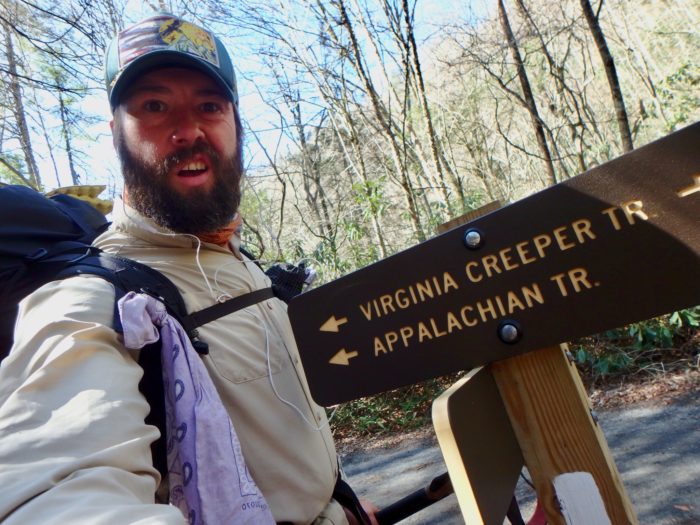 Well that was fun. Rejoining the Creeper 14 miles out of town.

The trail out of Damascus roughly parallels the Creeper Trail for a solid 14 miles. The AT, naturally, goes the most complicated, rugged, and vertically oriented path imaginable. Had I been aware that 14 miles after departing the Creeper I would rejoin it down the road, I would have seriously considered maintaining my footpath on this gentle tread. (I’m no purist, but I do have integrity, and I loathe yellow blazers.)

It was a steady day climbing up through the clearing on Whitetop and ascending Mt. Rogers. To my surprise the two-tiered Thomas Knob Shelter near the Mt. Rogers spur trail was occupied by only two others. So began my string of uncharacteristic shelter stays.

As night fell, the ponies wandered into the shelter area, licking rocks, trying to eat the straps off a set of trekking poles, and poking their heads into the open-faced shelter. I could basically pet the ponies from where I lay, and eventually they calmed down, standing still as sentries in the freezing mud under moonlight. 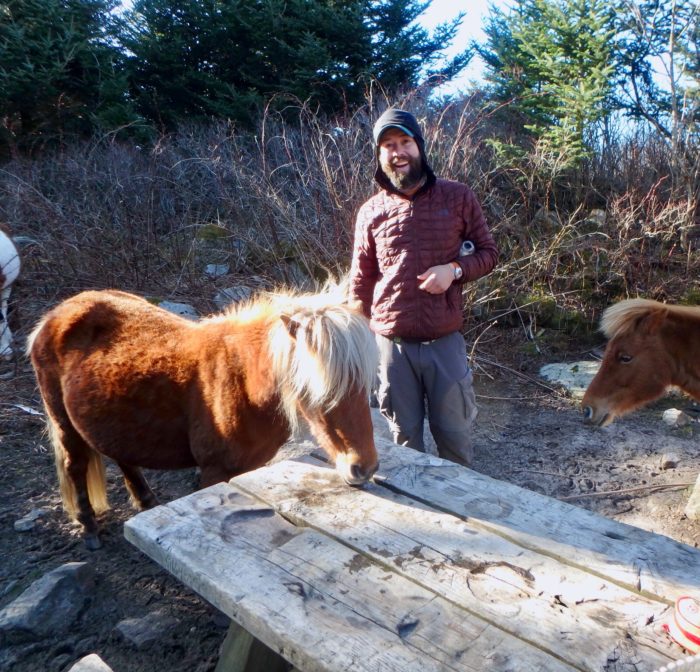 The following morning the herd terrorized anyone coming near the picnic table. They wanted coffee and Pop-Tarts, peanut butter and chocolate breakfast powder, anything that may unwittingly slip out of a hikers’ control. Strangely, over the past six weeks the most aggressive animal I have encountered has been this band of equines.

These ponies of the Grayson are described as semi-feral, meaning they are accustomed enough to humans to know of their own cuteness, and many people visit the state park in adoration of the creatures. The ponies were introduced as a means of keeping down vegetation in the area after the grazing land fell out of disuse from commercial cattle ranchers. To keep the balds from revegetating the ponies chomp at the brush and visitors just trample all over everything else.

As I passed through the area on what must have been the first predictably decent Saturday in recent memory, the crowds of people certainly reflected what is now a meteorological anomaly. What now must make me sound like a misanthropic curmudgeon is not intended as such. But imagine going hours, sometimes days, with seeing almost no one, and those who you do see only transpires for a moment, and then it’s back to solitary walking. Then it’s Saturday and the sun is out and people are everywhere gawking at the semi-feral ponies, gawking at the semi-feral hikers, all while trying to navigate a crumby, rocky, and muddy trail tread. 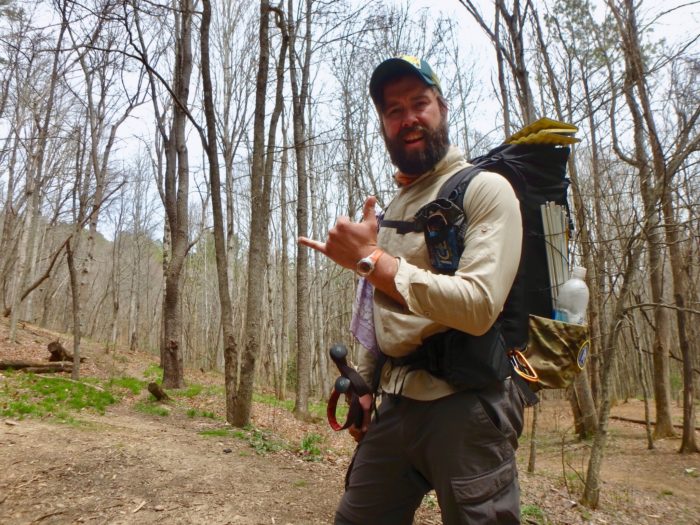 After passing the north end of the state park boundary it was business as usual, with the wide clearings, the blue sky, and all those great moments of hiking all rolled up into one amazing sensory experience.

I stayed at the Partnership Shelter while I watched others eat pizza delivered to the nearby visitor center. I opted out as I’d be in Marion, Va., for a couple of days, taking a day off while waiting for a friend to arrive on the Greyhound. I wasn’t originally planning on having anyone join me for my hike, but circumstances allowed her to come out to the AT while taking a temporary hiatus from the PCT. I encouraged her to come to Virginia for a month, rather than slide down a snow chute in the High Sierra.

I ate a huge lunch and had the waitress nearly drown me with sweet tea. Then it’s off to the library to write and lounge, watching the rain fall against the asphalt in the parking lot.