Virginia is for Hikers: Weeks 7-8 on the Trail

In my last post, I’d just made it into Virginia and was taking a day off in Damascus. Since then, I’ve hiked through the Grayson Highlands and Dismal Falls, and am currently in Pearisburg, VA. 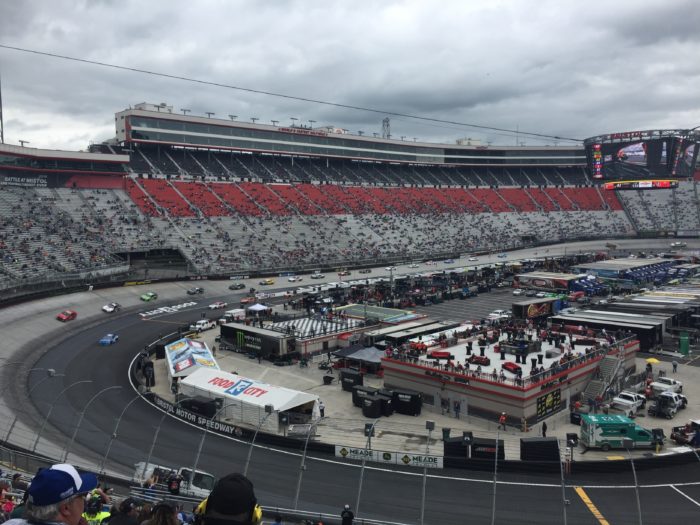 Not all zero days are created equal: I got to attend the Bristol 500 on my zero day in Damascus thanks to my good friend Eric! Very different pace than walking on the trail

I was lucky enough to be joined by my sister, Annie, for 3 days outside of Damascus. I’d planned to meet her at the bearpen gap trailhead after she drove down after work. Since you can never be too sure of what cell service will be like before you get to an area, we had everything preplanned. She made it to the gap in the pitch black where she saw a scary looking bearded man on the side of an empty country road. Luckily for her and for me, that scary, homeless bearded man was me! 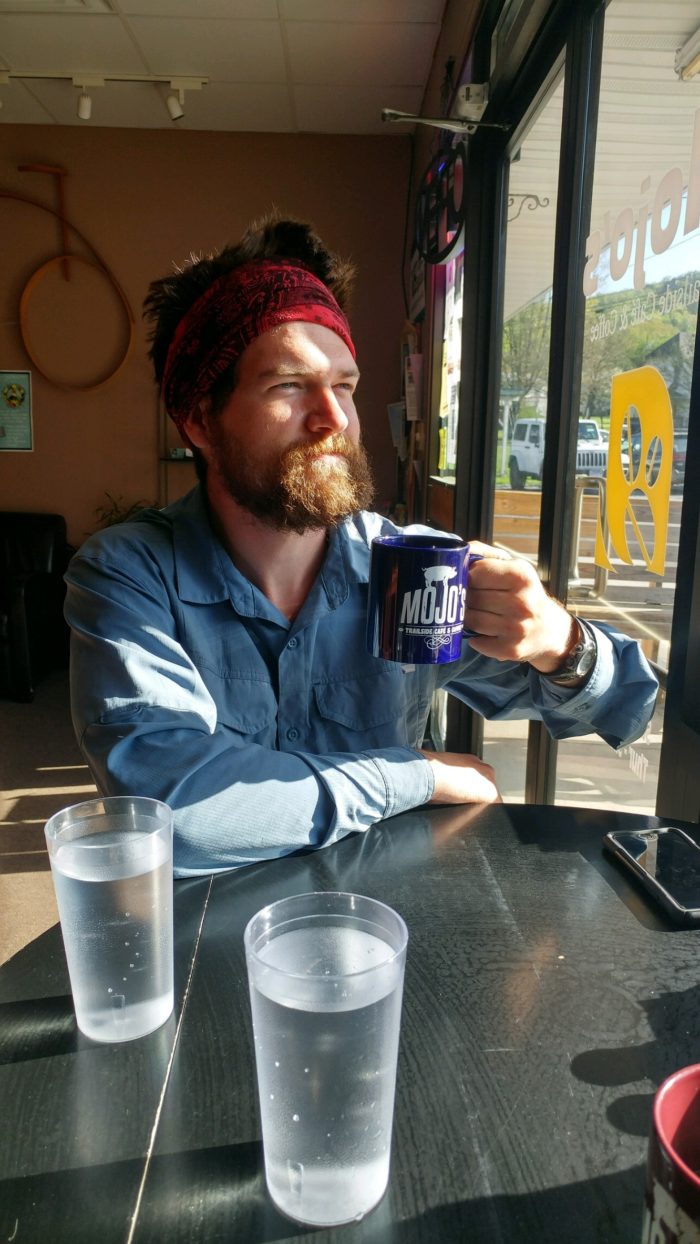 Would you pick this scary bearded man up off the street? That’s what I thought.

In the morning we shuttled her car to her hike’s endpoint, 30 miles away, thanks to the help from the guys at the Mt. Rogers Outfitters in Damascus (who are completely off their rockers, but in a hilarious, lovable way). My sister is a budding backpacker, so I didn’t want her to have to keep up to my daily mileage, seeing as how I’ve been doing this all day every day for the past month and a half. Our first day consisted of a long climb up Whitetop Mountain, not an easy climb, even for me! But my sister didn’t complain, even if she did delay a few attempts at conversation. At the end of our long climb, we were rewarded with one of the best vistas in Virginia yet atop Buzzard Rock! We both agreed it was well worth the climb. 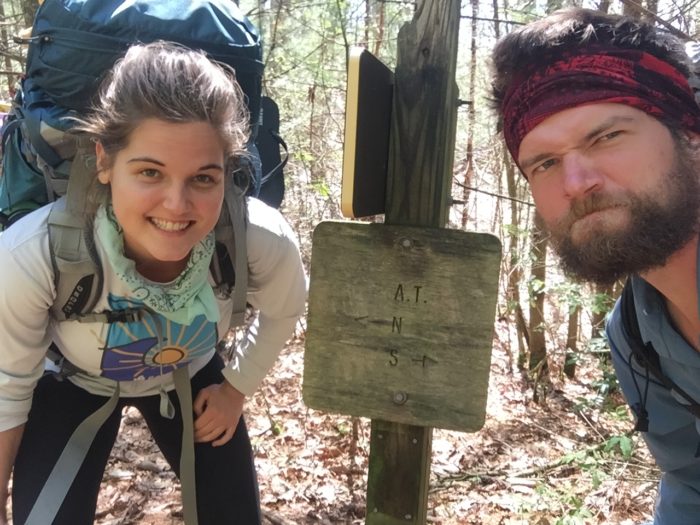 Welcome to the AT! 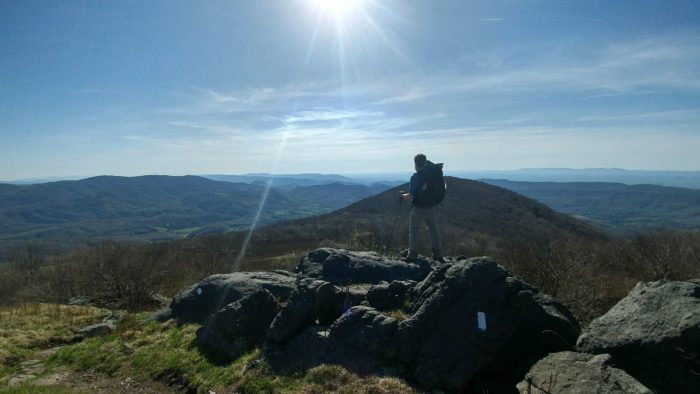 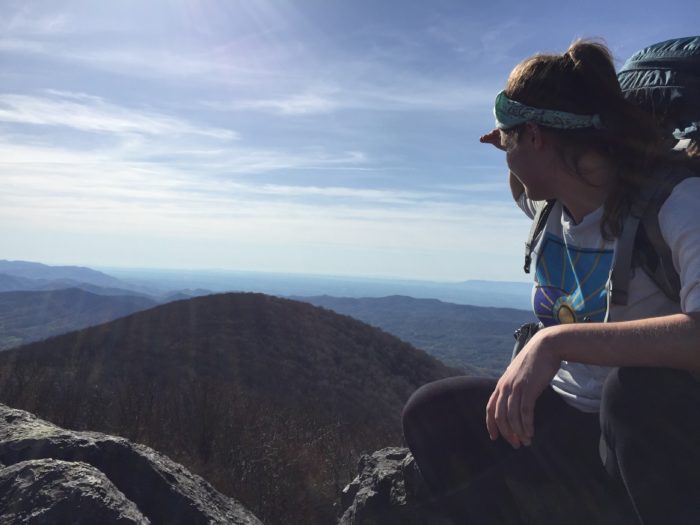 I just climbed that?!

After another mile to the summit, we set up camp on top of Whitetop for a beautiful sunset and sunrise, and a lot of manageable but strong wind. 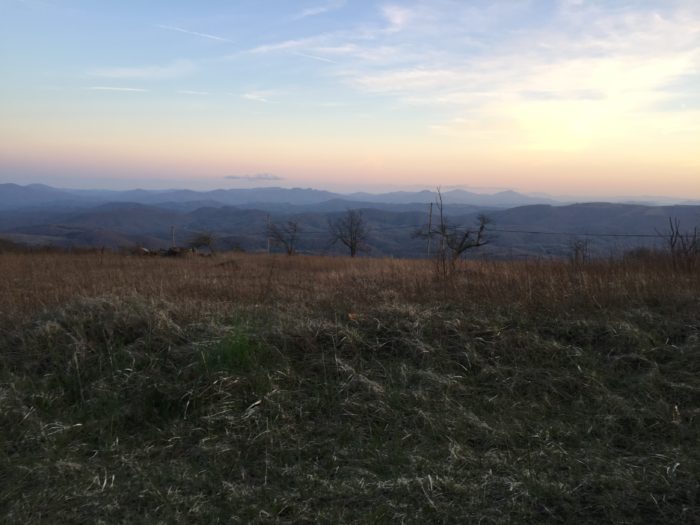 Our second day together on the trail was pure magic. After finishing the AT’s ascent to Mount Rogers, the highest point in Virginia, we reached the happiest shelter on earth, where we caught our first glimpse of wild ponies! The wild ponies help manage the vegetation in and around the Grayson Highlands. Their job is to literally eat grass all day and look majestic. While they do love to eat grass, they also love to lick and sometimes nibble on hikers since we’re so salty (read: sweaty). Every hiker gets some pony love! 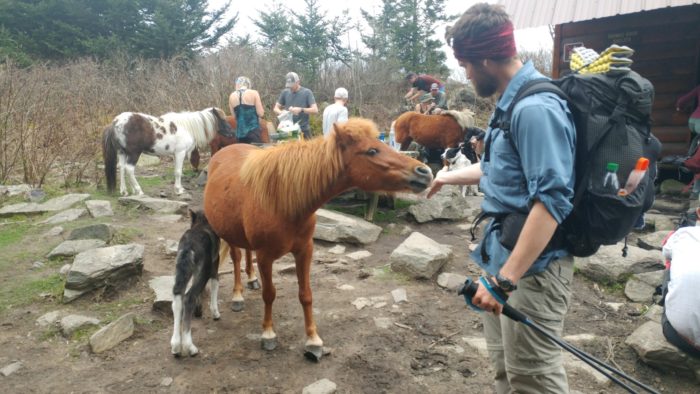 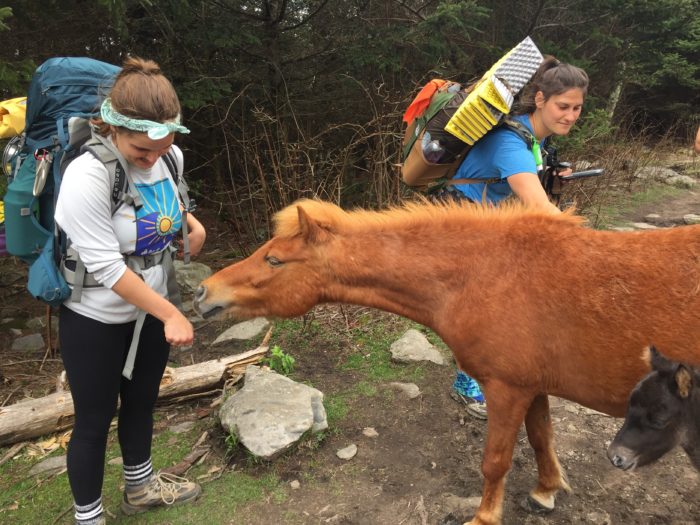 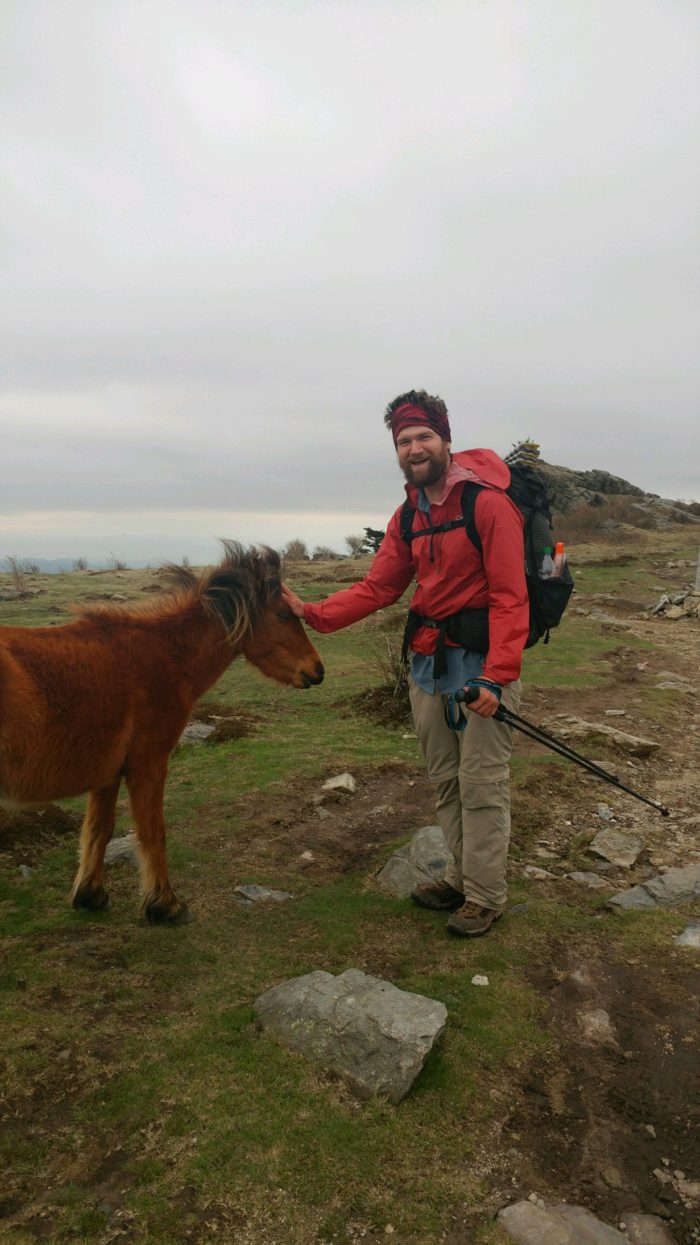 This is utter pony happiness!

The Grayson highlands area is beautiful in its own right, with massive rock structures and boulders, including the Fatman Squeeze, and far reaching views of the alpine looking area. Many times while looking out from high points, we could see ponies grazing on distant ridges. We came across almost 20 more ponies ranging free as we hiked through the park. I don’t know how you can be unhappy when you’re surrounded by ponies! We even saw two baby ponies!! 10/10 on the pony happiness scale (which is how I rate everything now). When we got to the shelter we wanted to stay at, there were even two ponies there that stayed nearby that night. 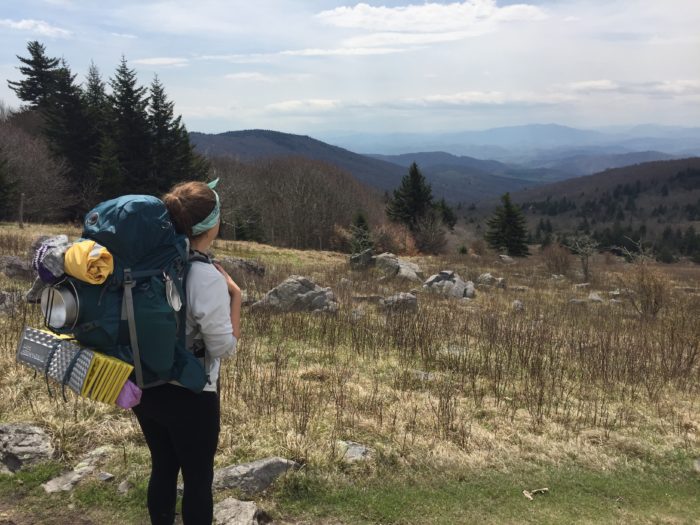 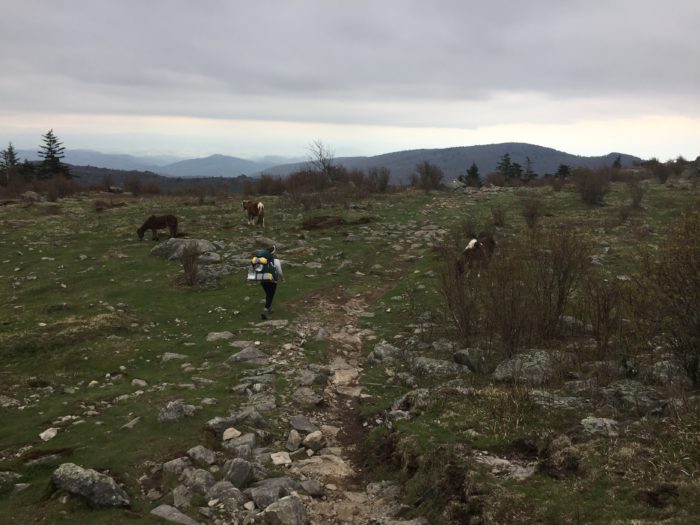 Oh you know, just walking through a field of PONIES!! No big deal 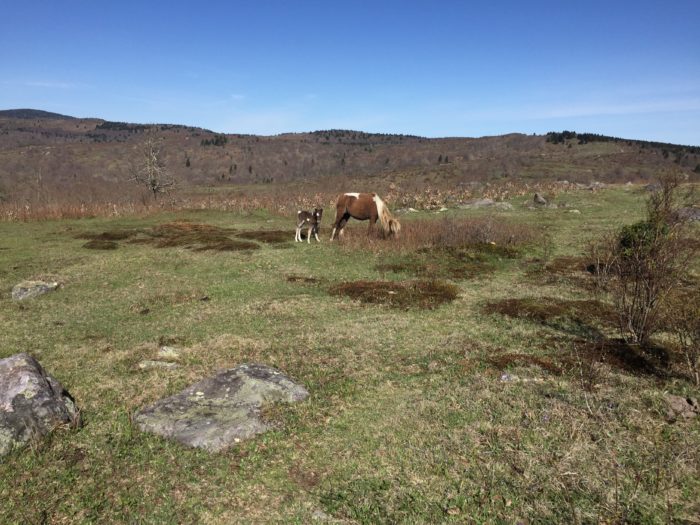 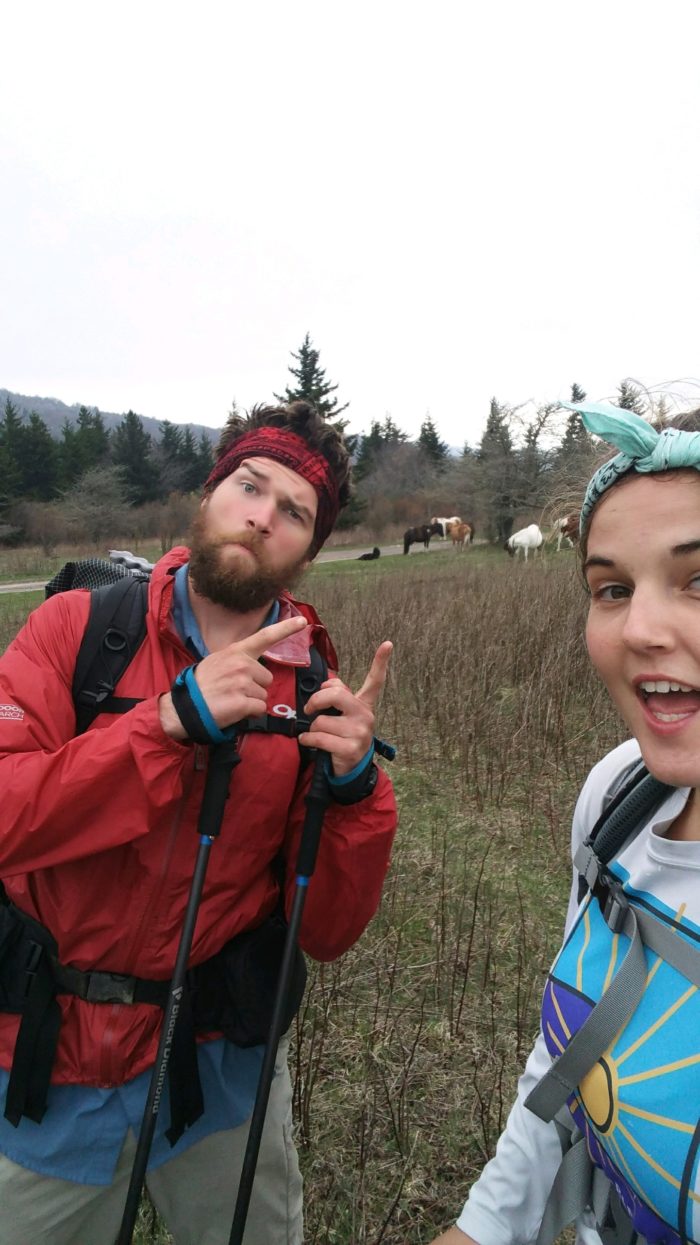 Sharing the AT experience with Annie was an absolute blast, even if it was only for three days. Like most of us when backpacking, she developed two big blisters on the balls of her feet. We had a great brother-sister bonding moment as I showed her how and walked her through the proper way to drain and treat blisters. Backpacking is not for the fancy!

Our third day was an easy hike to her car, where she even gave a lift to some of our hiker friends, Torro, Crotchet-Aisle, and Nash. Annie’s definitely a trooper, never complaining once! A great trip for the both of us that we’ll long remember. 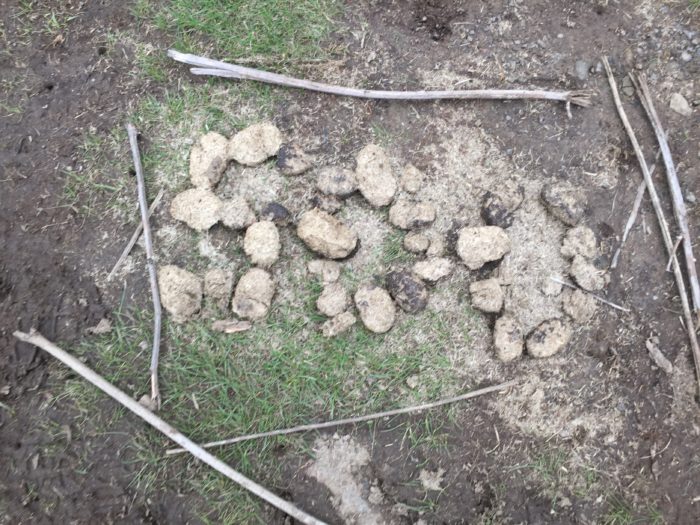 After saying goodbye to my sister, I made it into Marion, VA the next day for a quick resupply, shower, and stay for the night (on a friend’s hotel room floor, no less). My second hitchhike ever into town only took 8 minutes AND I lived to tell the tale! Leaving Marion, I hiked the 12 miles to Atkins, VA, running into great trail magic at the Settlers Museum where a Methodist church group had set up sandwiches and snacks for hikers passing through. The entire hike to Atkins I was hoping to have a cold margarita at the Mexican restaurant just off the trail there, only to find out they didn’t serve them or beer for that matter. 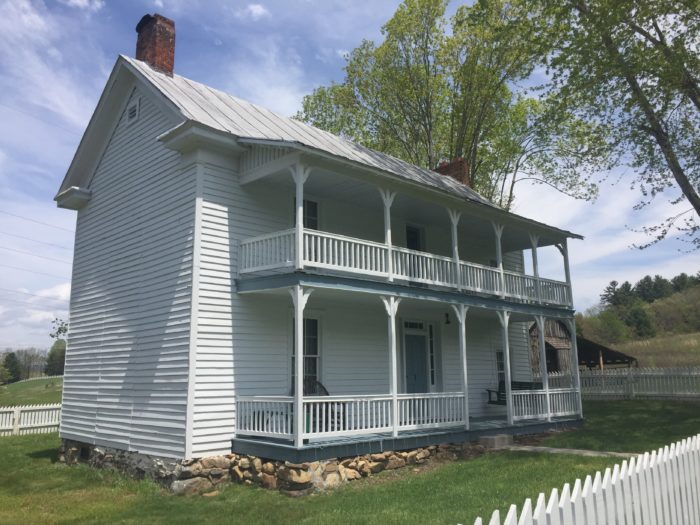 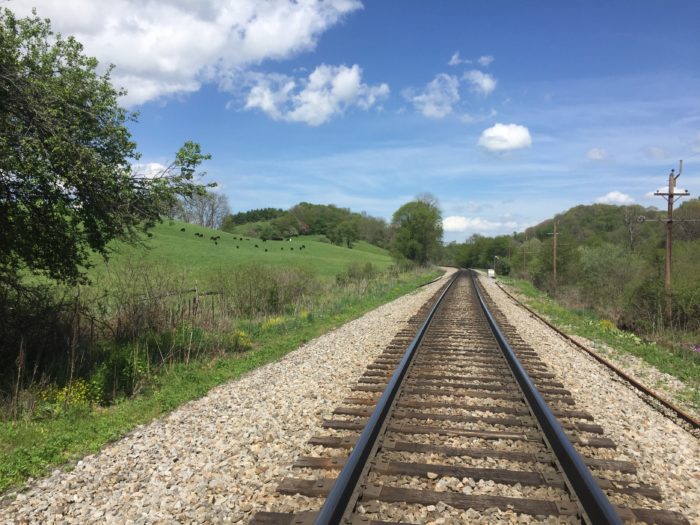 Cows grazing in the hike into Atkins, VA

Virginia has a reputation for being a “flat state.” But in all of my research and planning, everyone has said that Virginia is NOT flat. While it is a massive state in terms of trail miles, the section after Grayson highlands has actually been quite flat, with minor climbs each day and long sections of actually flat trail, a far cry from the constant ups and downs I’ve become accustomed too. Over the course of the 5 days of hiking from Marion to Pearisburg, I was able to set a personal best of 98 miles in 5 days, thanks in part to the many flat sections of the trail. 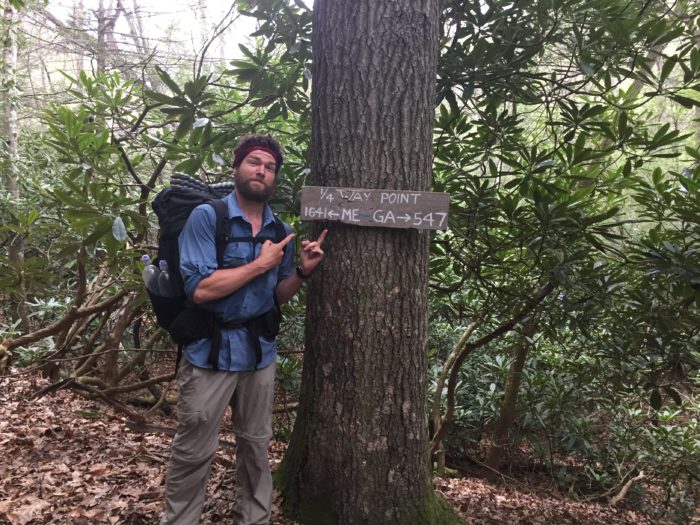 One of my favorite but haphazard spots on this section was at the Cosby Knob Shelter. After one of the longer climbs in this section, I made it to the top of Cosby Knob, a grassy open ridge with great views of the surrounding mountains and into Burke’s Garden, a crater-like valley caused by a limestone sinkhole. The shelter itself is a four walled enclosed building. The view from the top is fantastic, one of the best I’ve seen from a shelter.

Once I saw the view for myself, I decided to pitch my tent right where the view opens up, high winds be damned. I even asked the hikers (the smart ones staying inside the shelter) what the forecast is, to which they replied sunny, but high winds. I thought to myself, ah, that’s nothing, this sunrise will be perfect! Poor choice, Blue Steel… I didn’t sleep at all as I braced my tent from collapsing against the 50 mph gusts of wind. I have guylines, which serve as additional anchor points for your tent, but I didn’t have any extra stakes. I ended up using my trowel to keep one side of the tent from collapsing, and rigging my trekking poles to brace the other side. I still lay awake all night holding my tent up with my arms splayed when the biggest gusts came over the hill. I ended up maybe sleeping two hours, missing the sunrise, and slightly bending one of my tent poles. Moral of the story, don’t get sucked in by all the views! 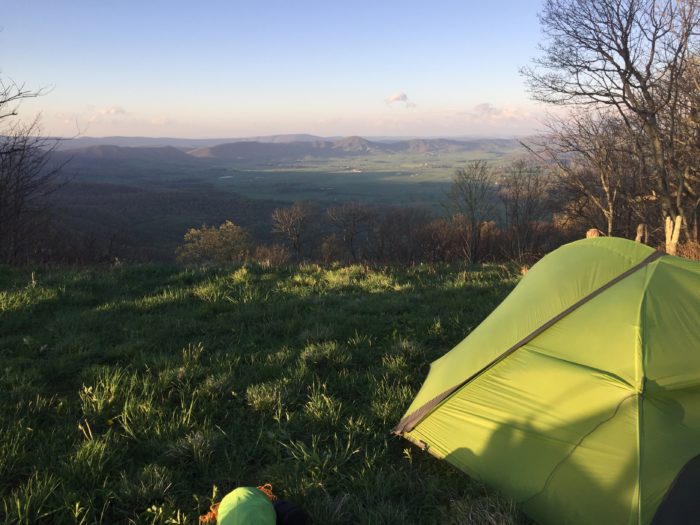 To be fair, it was a spectacular view

Also during this section, I camped at the Dismal Falls, just short of Pearisburg. I hiked a long 21 mile day to the short side trail, and much to my delight, a 2015 thru hiker, uncommon, had beer and snacks down by the falls. The Falls have a great swimming hole, and although I didn’t jump completely in, resting my sore feet in the cold water while sipping on a beer felt absolutely wonderful. To top things off, the group of thru hikers staying at the falls all shared smores around a fire. I’ve really liked this section of the trail and have been able to test myself physically with mileage. 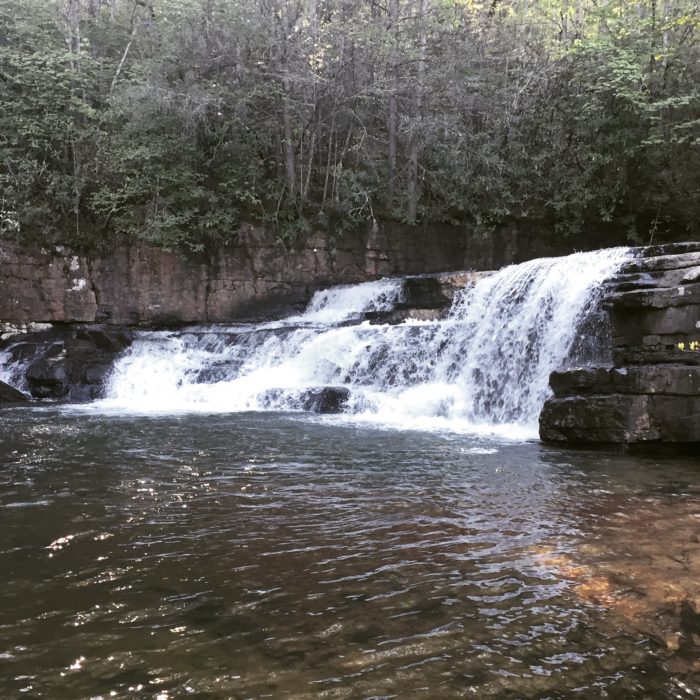 A few trail tips I’ve learned the the hard/easy way:

Don’t kick your pot of boiling water over on the ground. You’ll need it for whatever you’re trying to cook

Do listen to your body but don’t freak out about every ache and pain you have. “Is this going to become serious?” -me, whenever some part of me hurts

Do fly like The Flash when setting your tent up in the rain. It’s ok to grumble while cooking in the rain however.

Always, always pee before zipping into your sleeping bag. Otherwise you’ll spend the rest of the night too lazy to get up but too uncomfortable to sleep.

Never eat only one S’more (thanks, Turtle!). Always save a little bit of marshmallow in your beard for savory seconds.

Never say no to trail magic (do you want candy from my van? Uhh, yes please!!), but always say thank you! Thanks to the Methodist church for the sandwiches at the settlers museum, team j-bird, and uncommon for making this section in Virginia magical! 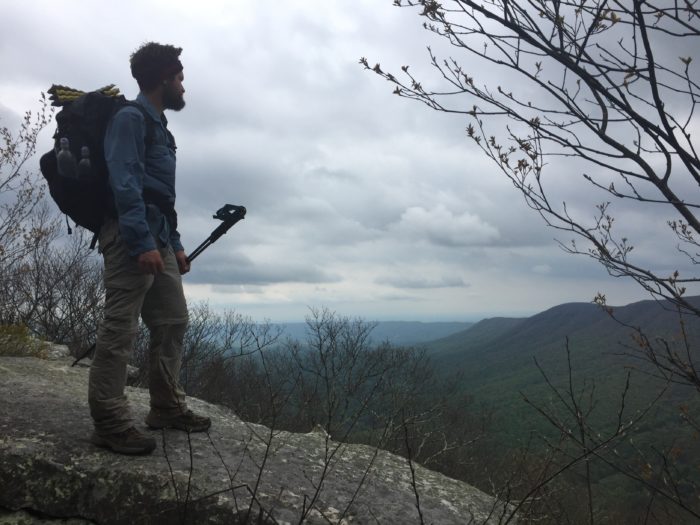 Next up is the Tinker Cliffs, Dragon’s Tooth, and Mcafee Knob, the most photographed spot in the entire Appalachian Trail. Stay tuned!