Virginia Is Beautiful but Tough

Hello adoring fans and avid readers. We write to you today from sunny Waynesboro, Va. 863 miles in and just recuperating before we tackle Shenandoah National Park.

What a couple of weeks it has been; challenging climbs, challenging conditions, intervention from Mother Nature, and we’ve even managed to out-hike our kit. It would seem that the engineering design life of our gear is somewhere around 600 miles as the following has broken in the last couple of weeks: both our shoes, Buck’s chest strap on his pack, Buck’s walking poles, our food bag clasp, Buck’s shorts (for a good 100 miles he could have been charged with indecent exposure, more on this to follow shortly) and our water filter bladder. But don’t worry, it’s remarkable what you can fix with some duct tape and a small carabiner – I knew my engineering degree would come in handy one day. Although seeing it written down, you could argue that the issues may lie with the owner rather than the kit.

Virginia is stunningly beautiful. It seems like spring has finally caught us and it has been glorious to see the leaves on the trees and flowers blooming again. What I’ve really been struck by are the smells out here – the fresh flowers, the dew on the grass; it’s incredible. It almost smells like a bottled fragrance. However, the trail has most certainly made sure that we have worked for these views and aromas. We missed the big-hitting views in Georgia, North Carolina, and Tennessee due to bad weather so we were incredibly excited to be getting close to McAfee Knob in Virginia with a clear forecast. The weather has definitely taken a turn for the better, so we were making sure to bust out the big miles to make sure that we were at the vista point while the sun was shining. Sadly, the trail had a different idea. Having climbed the Dragon’s Tooth (literally climbed; the rocks were so steep that ladder rungs had to be drilled into the rock face to let us traverse it) earlier that morning, we could see smoke in the distance. Turns out that that smoke was the beginning of a bush fire right at the base of McAfee Knob, so when we reached the gap just before our ascent, we were met by the Forest Service. The trail was closed and they’d give us a shuttle 17 miles up the trail to Daleville. Devastated. Absolutely devastated. Another breathtaking view taken from us!

Not if we had anything to do with it. We decided to take a day in Daleville to try to wait out the fire, and you’ll be glad to hear we did. Boy, was it worth it. 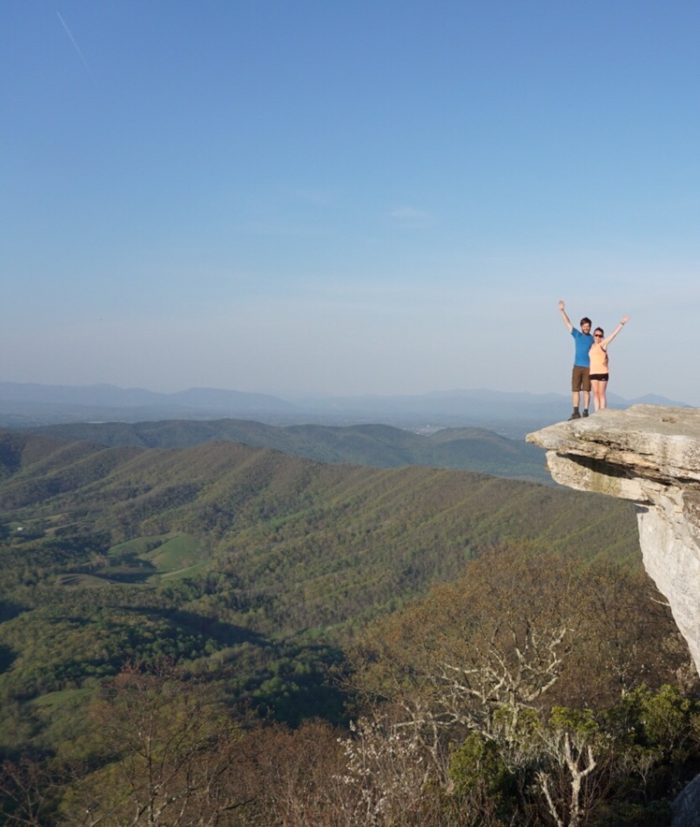 We made it to the summit just before sunset and the light was beautiful. We’d hiked 19 miles that day in 30 degree Celsius (90F for the Yanks) but every step and drop of sweat was worth it for that view. 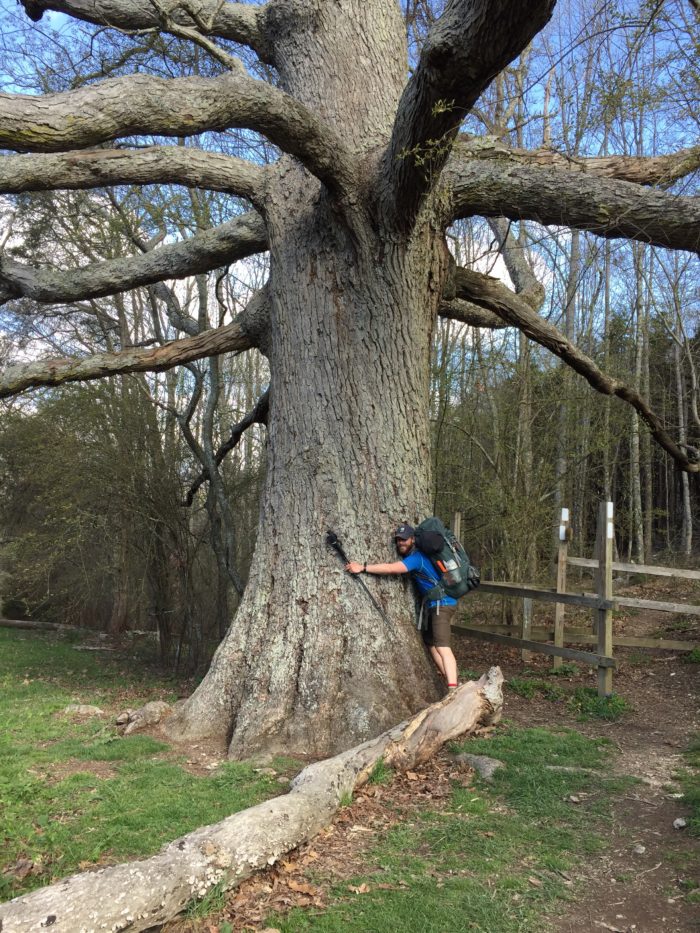 Beautiful Virginia. You can see the beginning of the brush fire in the distance in the bottom photo  and in the top photo Buck is showing his appreciation for the second biggest oak on the trail. Quite the claim to fame! 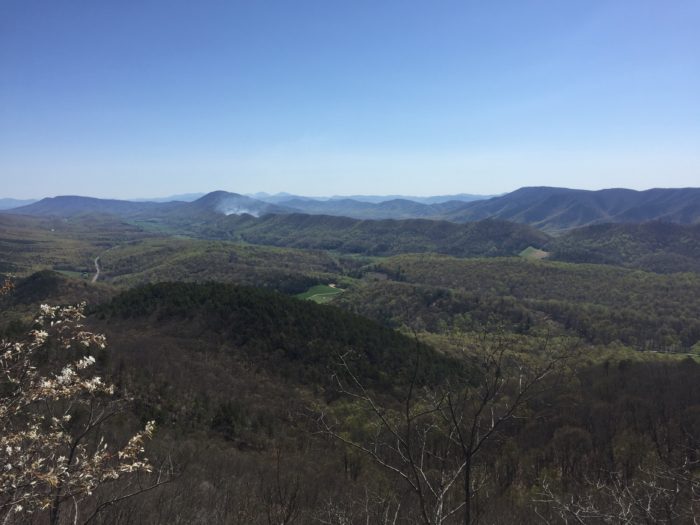 Speaking of sweat (lovely, I know), that brings me on to the heat. My oh my, what a change a few weeks makes. Having been used to camping in the snow, rain, and cold we are now camping in very different conditions. It’s funny. I remember how I used to say I couldn’t wait for the sun and the heat, but now it’s here and out in full force – how wrong I was. Usually being like a lizard on a rock with the sunshine on holiday, this has been my first real experience of having to do exercise in the high heat and it is hideous. For the first time in my life I have been so warm that my eyelids, yes my eyelids, have even started sweating! What is this!? Why do they even have the ability to sweat. Also, as Sod’s law would have it, this would be a stretch of time when we have had to go ten days without a shower. We absolutely stank. No number of wet wipes and washing socks in the river can cover that stench. I think it may haunt me forever. But in good news, we’ve showered now. Yay!

The thing with the heat in Virginia has also been that it’s caused hydration problems. The water sources are fewer and farther between out here, so in order to keep properly hydrated, we’ve had to carry large volumes of water up big climbs. Some days there were nine to ten miles between water sources but we would also climb 3,000 feet over four miles. Thankfully, we were up to the challenge. This also did lead to a rather amusing moment where our tramily member Hedwig’s bag rolled down the hill into the stream. But we’ve really had to strictly ration our water intake to make sure that we safely get through the day.

Now, through this blog you’ve probably been wondering about Buck’s shorts. Well, don’t worry, the moment is here. With the new warmer weather, the trousers were sent to New Hampshire where we’ll be reunited with them before the Whites and the shorts have become his only form of trouser. It would also turn out that the shorts were not up to the test of the AT. After a couple of 20-plus mile days he started to notice that his shorts were wearing at the crotch. As the true seamster he is, he repeatedly sewed up the hole until one day we had to scramble up a steep rock. Riiiiiiiiiip. Through the next couple of days they rip more and more. Every big step up a rock or over a fallen tree, they rip again. It gets to the point he’s essentially wearing chaps. Thankfully for the rest of the AT community he was wearing boxers. What I find most surprising is that nobody really questioned it, which begs me to worry about what reputation hikers must have.

We are surviving well and looking forward to Shenandoah Park, although getting increasingly wary of how close the 1,000-mile mark is and how far we’ve come. Excited to see what the next 1,330 miles still have to bring us. Hoping to see some bears in Shenandoah but hopefully no more rattlesnakes. We encountered our first one yesterday, but don’t worry, I handled it like a boss 😎 Buck even managed to get a picture – he has no fear. 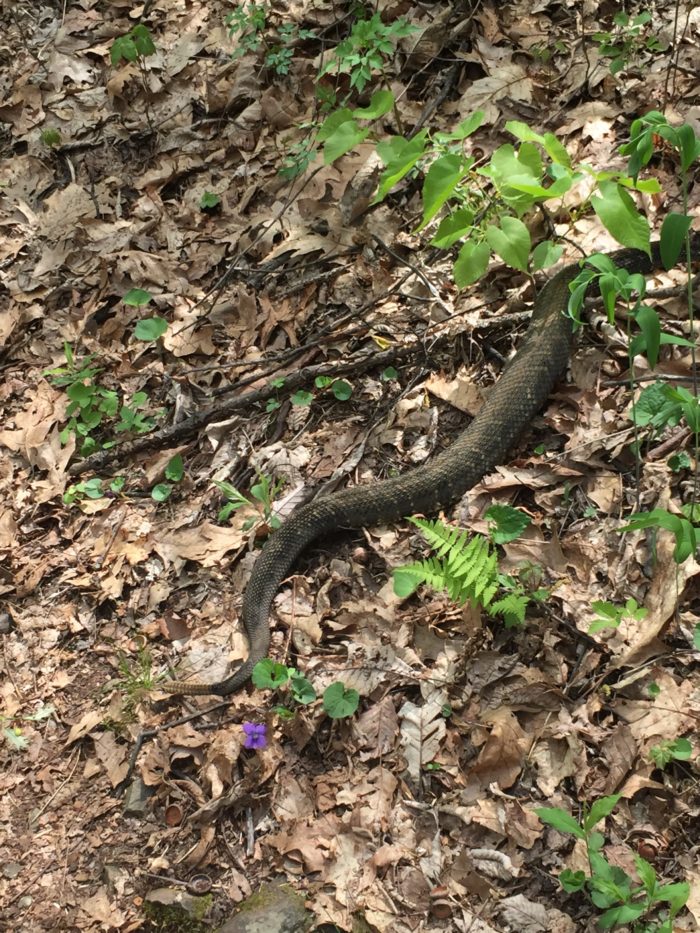 Hopefully, the next time we blog, we will be happily completing the half-gallon ice cream challenge at Harpers Ferry at the halfway mark. Until then! X

Buck does have fear! Sneaking around the back of a rattlesnake while it watches you over the shoulder it doesn’t have is definitely the scariest moment of the trip so far.

The phrase, “Babe, there’s a rattlesnake on the trail,” was one I was looking forward to not using, but the day came when I had to yesterday. Hiking along slightly in front of Robin and Brand New the snake and I saw each other at the same time and both stopped dead. I took a couple of steps back. The snake was going from left to right across the trail and I’d interrupted him just as he was heading into the undergrowth on the right.

Robin has genuinely no fear. She stepped passed me and started banging her hiking poles together in an effort to move the snake on. It was having none of it. So what does she do? She skirts around it as if nothing is the matter, while the snake gives a little rattle of the tail just to let us know it’s there. The monologue in my head at this point is something along the lines of, “What the… you can’t just… but that’s a… oh God, I have to go next.”

I give it a slightly wider berth and receive no rattle, which pleases me greatly.