If there were any mice running around the shelter, they were drowned out by Ireland’s snoring. I woke with the light, enjoyed chocolate PB oats, and packed quickly. Cricket and I got an early start. A short climb brought us to the top of the hill and then it was easy walking. I had a runny nose and irritated throat, but felt energized. I made an extra effort to stay hydrated and take electrolytes. A short way along we encountered our favorite trail dog, Goofy, who came bounding over to visit.

Eventually the trail descended to War Spur shelter. It was a fantastic shelter, with a bench, lots of flat camping, and a rushing stream nearby. Cricket and I stopped for a snack and a break; Gummy stopped as well. After came our first big hill climb, which I did along with Gummy. It was hot and sweaty.  I pictured illness molecules oozing out of my body to be replaced with healthy nature energy. At the top Kelly Knob was a neat cluster of rock with a decent vista. 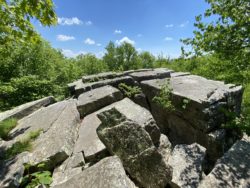 As I hiked I thought about an ex-boyfriend, Alexis, who passed away on this day four years ago. He would be happy I am walking amongst trees. In fact, I encountered Keffer Oak, the largest oak on the south AT and pictured him trying to wrap his arms around its 19 foot girth. It made me smile.

The second hill climb took us up Sinking Creek Mountain. We went only 1.5 miles along the ridge, but it seemed to take forever for the shelter sign to appear. I was ready to be done for the day. Then it was 0.4 miles down to the shelter. Always sad when you have to walk that far to one, but we wanted water. For dinner I ate cheesy broccoli quinoa, recalling Alexis’s joyous description of cheesy bread, “it’s as if cheese and bread had a baby”. I had one of my last two Forrest cookies. Then it was nearly dark and time for a tick check followed by sleep.

Luckily last night’s congestion disappeared and I was back to a runny nose. Easier to hike when I can breathe through my nose at least part of the time. I didn’t enjoy the climb from the shelter to the ridge, but afterwards I had fun. To keep my spirits high I put on Jimmy Buffet. The ridge featured patches of forest interspersed with sunny rock slabs that offered glimpses into green valleys. At the next water source Cricket was waiting to point out the rock arrow pointing to the spring. I’d have missed it otherwise.

Over Memorial Day weekend we kept hoping for trail magic. Now that I’d forgotten to hope, I came upon magic at lunchtime. A guy gave me boiled potatoes topped with generous butter, salt, and pepper. Another guy gave me a thru-hiker survey and a candy bar. The survey asked questions about my preparedness for the trail and my perception of other’s preparedness. A beautiful butterfly landed beside me as I answered questions. I provided my email for a followup survey as the researcher hopes to study post-trail emotions. 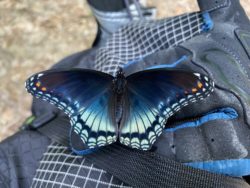 The afternoon took me on a well-graded climb up Brushy Mountain. Prior to trail magic I started the audiobook To Sleep in a Sea of Stars by Christopher Paolini and was very much enjoying it. The climb turned into a gentle grassy trail on the ridge then descended to Trout Creek. I was out of water at that point so I joined a cluster of other hikers and refilled my bottles. The cool water was refreshing, but I didn’t linger with only 1.2 miles to go.

Serendipity texted that there was camping and water not far past the shelter junction (she went through yesterday). I was excited and texted Cricket that I planned to camp there and avoid the extra half mile to the shelter and its water. She was not at the junction nor the campsite, which was a beautiful grassy spot amongst tall trees. I’ll reconnect with her tomorrow. I got to bed early to catch up on sleep. At midnight I woke and was treated to an impressive lightning bug display.

Virginia has what is called the triple crown of hiking. The first, Dragon’s Tooth, was about four miles from my campsite. I got an early start to beat the heat and passed the 700 milestone on the way. At one point a pileated woodpecker with a brilliant red crest landed on a tree beside the trail. As I admired the rocky fin that looked like a giant tooth, Cricket and Hummingbird caught up to me.  Hummingbird is a member of our tramily who recently returned from a weekend off trail. 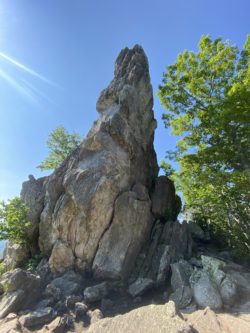 It was a steep, sometimes treacherous due to rocks, descent from the tooth to a paved road. There we walked a half mile to Catawba Grocery. Amazingly the store had kombucha, which all three of us got and drank to toast Cricket’s birthday. We also ate a variety of junk foods for lunch. Back at the trailhead we ran into High Route. He was excited to see us. He had a bad toe blister so I gave him moleskin.

At lunch and in the afternoon I got to know Hummingbird. He studied environmental engineering with a masters emphasis in air quality. He also spent a summer working in Yellowstone and was familiar with Livingston.

We sweated while crossing a cow pasture in full sunlight. An hour later we got poured on, though it didn’t last long. Around 6:30 pm we made it to McAfee Knob, the second of the triple crown. We did the classic pictures on the outward thrusting knob of rock. Then Cricket and I ate Rice Krispy treats as we admired the view. It really was amazing! There were green patches of land amidst forrest with blue mountains in the distance. It was a short descent to Campbell shelter. 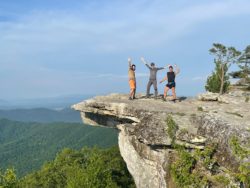 Last night we tried to sleep in the shelter, but suffered a No-see-um onslaught. Around midnight, I heard Cricket get up and erect her tent. I soon followed suit. The one bonus was seeing the nearby field full of glowing fireflies. Once in my tent I managed to get three or so hours of sleep before getting up at sunrise.

After a couple hours hiking, we reached the third triple crown feature, Tinker Cliffs. Like the knob the view was expansive, but a half mile in length so even better. I could see McAfee Knob across the valley and it looked minuscule. The trail meandered between the rocky cliff tops and forest with a flat, grassy floor. A brilliant pink mountain laurel bush perched on the cliff edge caught my eye.

We got water at a creek and then it was a nine mile push to town. I had low energy due to lack of sleep and lingering cold symptoms. My captivating audiobook and the promise of Mexican food kept me pushing on. Also, near the end we came across an Eastern Hog-Nosed snake that was fascinating. It spread its neck when I approached it and the region tinged orange. The trail took us right into Daleville where we got a room at the Super 8. Pancho Mexican restaurant was directly downhill and I ate nachos after snacking on lots of chips and salsa.

Daleville has a post office so I gathered the warm weather clothes I no longer need and mailed them home. Then I stopped at the Kroger store for four days of food. Serendipity got into town and joined me at the store. We drank fresh juice then headed back to the hotel room. Hummingbird and Cricket were watching the Office as they repackaged food. The four of us did a combined load of laundry. With showers and wifi usage, the evening disappeared quickly.