I didn’t even know this was a thing until I’d gotten into Daleville and began researching the area. I was impressed with the towering rocks and steep cliffs, and only later learned this area is the crown jewel of Central Virginia.

My first night in Pearisburg was spent picking apart a rotisserie chicken from the supermarket and listening to others fret about the implications of a fire closure and around McAfee Knob.

The section was a few days ahead and with the warm temperatures and no precipitation, I thought the likelihood of a reopening slim.

But I’m used to the ferocious fires of the West. Summer tinderbox forests explode into raging infernos that only a winter snowfall can smother.

Some were upset that this stretch around McAfee was closed, and in my ignorance I figured I’d miss out on one of the most photographed places on the AT. Aside from the small outcropping of rock, I had no idea what this 20-mile stretch included.

Chomper and I are on a fixed schedule, needing to catch a shuttle to get her to Yorktown for part three of her trip. We have been ahead of our plans so we’ve been able to take a few extra days here and there. Already a zero in Pearisburg, and with a closure, likely a double zero in Daleville.

I left Pearisburg in the morning and was surprised with the news that the brush fire around McAfee Knob was out and that the trail was again open.

Chomper and I left the Audie Murphy monument after hearing from a former East German solider describe what it was like in Berlin when the wall came down. Chomper hummed “Anchors Aweigh” across the gentle crest. 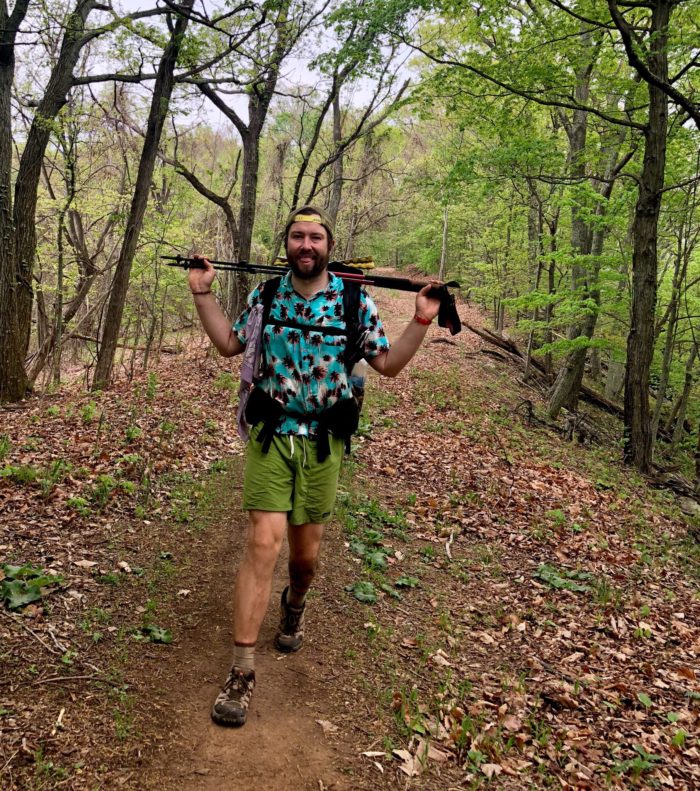 Enjoying that smooth trail across the crest.

We thought the Dragon’s Tooth was an obnoxious impediment on our way to the Catawba Grocery. Then Chomper tried to perform a bouldering move on the rock face and found herself with two points of contact, one foot and her backpack. Her shouts were drowned out by my laughter and the sound of a riding lawnmower in the valley below. 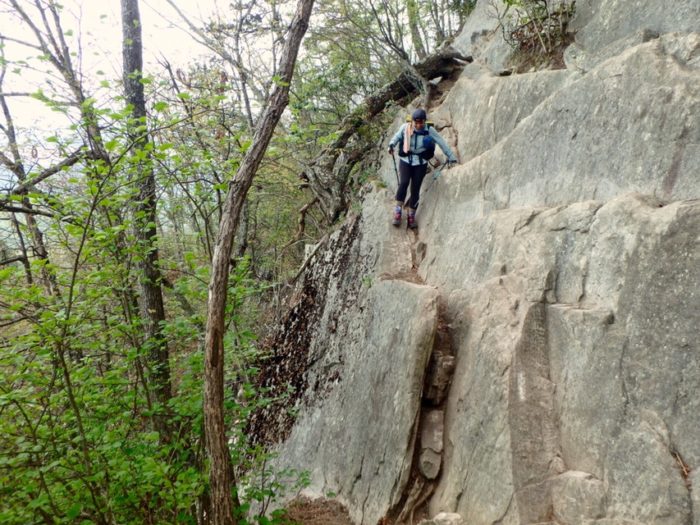 Chomper descending Dragon’s Tooth, moments before screaming for her life clinging to the rock face.

Leaving the self-proclaimed grocery store, a large gas station, under threats of rain, we pressed to Johns Spring Shelter across the highway.

Even on a Saturday night, at a shelter a mile from the road, on the way up to McAfee Knob, the place was empty after nightfall.

The morning up to McAfee Knob was damp and cool. To the east the duff and underbrush were freshly burned and there was a smell of cinder and ash. A thick fog hung close to the summit and views were limited at best. As the clouds blew past, brief glimpses could be had of the valley beyond.

During the walk along the ridge toward Tinker Cliffs the fog began to burn off and the air was sweltering and thick. I didn’t know what the cliffs would have to offer, aside from what the guide called a view toward McAfee. Given the view prior, I was not hopeful.

Once the clouds began to lift, the light pushing against the gray, the brilliance of the green mountains, the golden spotlight like circles filling the valley, something about the light all happened in the right way and made this one of the best moments on the Appalachian Trail.

I was so transfixed in that moment that I failed to take heed when the storm clouds opened up and began showering the valley below. For five minutes I watched the rain shower rush toward the cliffs and then acted surprised when the cold rain pelted the rocks. 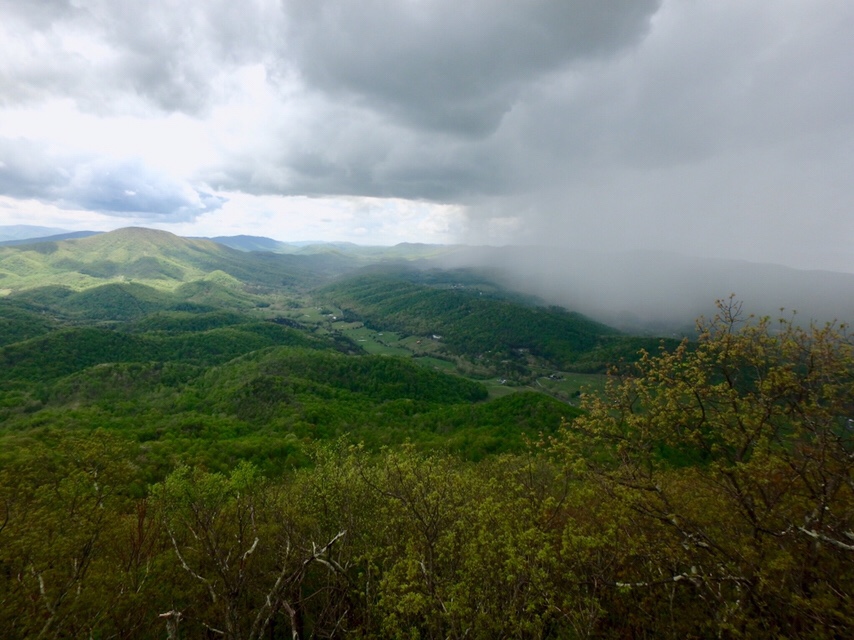 Watching the rain pass across the valley. Tinker Cliffs.

It was a quick, hard rain and when it was over there was a golden radiance passing through the steaming forest floor.

The trail into Daleville spits hikers out onto a suburban feeder highway unceremoniously. I stood at the edge of U.S. 220 questioning my sanity. I had to wonder how it’s possible to experience such moving beauty in the beginning of the day and then to find myself in the midst of sprawling America at the end. Sometimes I find the dichotomies subtle and nuanced but here they stood in stark relief.

I embraced Daleville, the barbecue joint, the Kroger, the pedicure at the nail salon, the whole half mile I was willing to walk from the comfort of my motel. 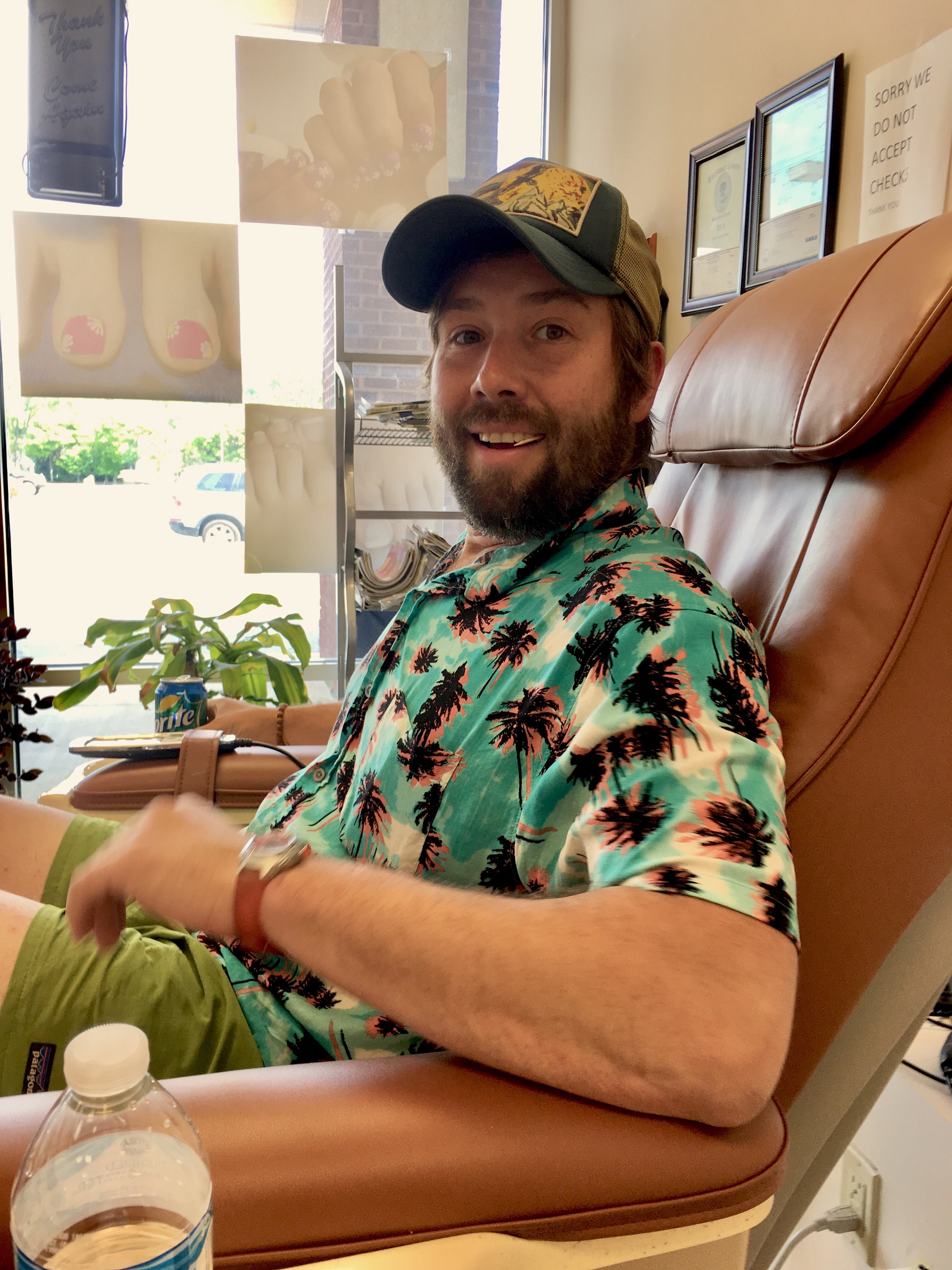 It was a sleepy zero in which I didn’t rest well. That seemed to be true for the others trying to break from Daleville’s grip working their way toward Fulhardt Shelter.