I woke up a little cold and heard people rummaging around me. I poked my head out of my sleeping bag and came face-to-face with a winter wonderland. Everything was covered in a shallow blanket of fluffy snow. We were planning on hiking a short 9 or 10 miles to the marina at Fontana Dam to get a shuttle into town and stay at a hotel. Since we didn’t have a lot of miles to cover, we took our time and got a little bit of a late start at 9:30. Grievance and I started out hiking together and Dirtbag hung back at the shelter to pack up. 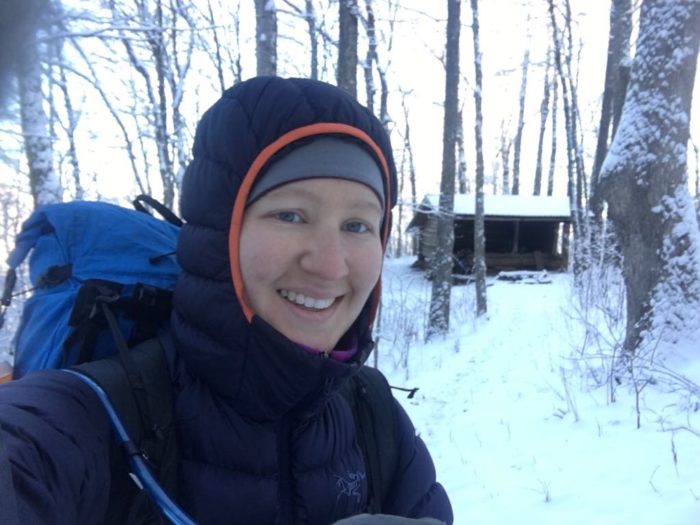 The girl that came in late last night (we gave her the trail name Monster because she beasted 20 really hard uphill miles yesterday) had left before us, so thankfully we had footprints to follow in the snow. The few inches of snow actually gave us traction so we weren’t slipping around too much, but Grievance kept hitting the low hanging trees with his pack which would send a shower of snow powder down his back. I was able to duck under them with my short pack and avoid the snow shower. The temperature wasn’t too chilly compared with yesterday and the forest was beautiful to look at, so the morning hike was enjoyable. 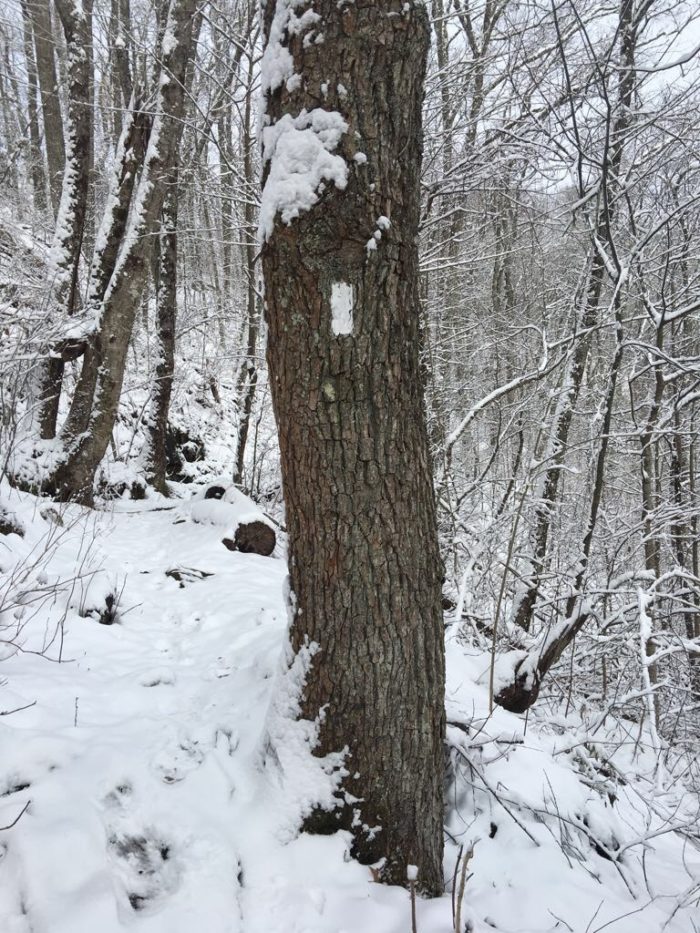 We passed an older hiker named Whale, taking the trail slowly, who had 2 short sticks instead of hiking poles and grocery bags around her feet inside her shoes. We said hello, passed her, and I felt a little worried about her making the 7 or so remaining miles to town. We hiked on a little ways and I hung back to use the bathroom that is the great outdoors. When I started hiking again, a middle aged man caught up to me and we started chatting. His trailname is Wolf and he’s section hiking from the NOC. He doesn’t work in the medical field but he took an EMT class a while ago so we swapped EMT stories. We caught up to Grievance and kept hiking as a group. 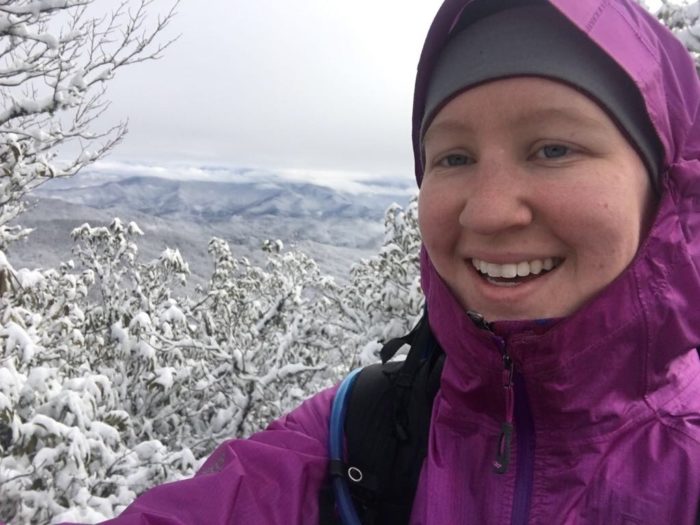 The three of us stopped for lunch at Cable Gap shelter and Wolf told us how he’d stayed in this shelter last August. He set up his hammock in the shelter since he was by himself, cooked Spam over the fire, and hung his food bag away from camp. In the middle of the night, he woke to loud sniffing and found a black bear in the shelter who must have been lured in by the smell of cooked Spam.

We hiked our way down the long descent to the marina and the snow started melting, making everything slushy. Our feet were already wet from the snow, and the melted snow made large puddles that were hard to avoid. We were squishing down the mountain and could see the dam in the distance, but still had 2-3 miles to go down long, tiresome switchbacks. It always seems like the longest miles of the day are the last 2-3.

After finally arriving at the marina, the weather was beautiful, warm, and sunny. It was hard to believe we woke up with the ground covered with snow this morning. None of us had cell service, so we used the phone on the wall by the bathrooms to call for a shuttle to the lodge. We proceeded to take off our sopping wet socks and rub our aching feet while we waited. What seemed like mere seconds later, a beat up pickup truck pulled up and asked us if we needed a ride. We politely said we were waiting on a shuttle to the hotel, and the man clarified that he was our shuttle because the normal shuttle was out of service. We loaded up our gear and our tired bodies in the back and hung on tightly as the driver careened down back mountain roads the few miles to our destination.

We checked in, got to the room, and marveled in the miracles of modern plumbing and heating. We cleaned up and met for dinner where we ate the burgers and drank the cold beer we’d been dreaming about for the past week. Dirtbag joined us halfway through dinner. We were so glad to be out of the wet and cold that we embodied eat, drink, and be merry. We stayed up way past hiker-midnight enjoying the group’s company in the warmth and dryness of the hotel. Going to bed snuggling the soft pillows was heaven. 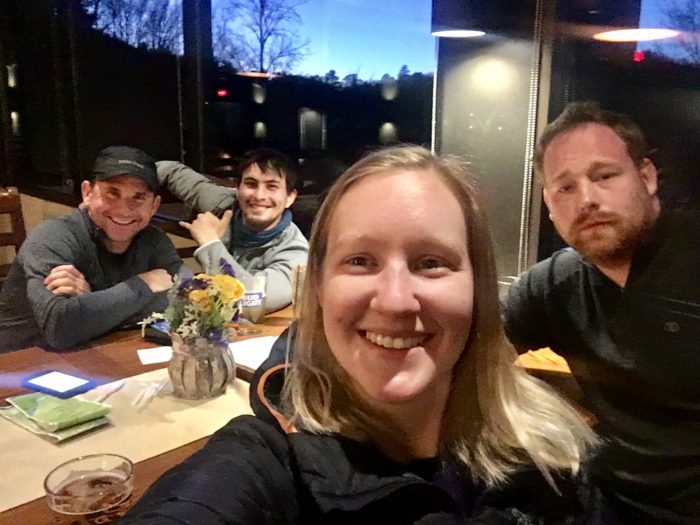 We woke up early despite going to bed late, and I proceeded to get all of my gear in order. We were checking the weather reports last night which was listing temperatures in the teens at night, and Dirtbag and I were the only 2 in the group planning on leaving this morning. Grievance was planning on getting off trail to see a dentist for a toothache, and he graciously offered me his 5 degree sleeping bag to use.

Our group briefly gathered together and Wolf announced that the weather reports had changed significantly overnight. Instead of positive teens, the lows were now in the negative teens to negative 20’s, with winds upwards of 40 mph. Grievance’s 5 degree bag wouldn’t touch negative 20, even with wearing all my layers. In the span of an hour, my plans changed what felt like a million times. I finally settled on waiting out the storm at the Lodge, splitting a room with Grievance and a few others to make it more affordable, and praying that the storm let up sooner than it was calling for.

As bummed out as I was about being stranded for the next 2-3 days, it was a relief to be able to resupply, do laundry, and rest without a tight timeline. After another shower which felt like a luxury, we headed down to the general store later in the day. Fontana Dam is hardly a town, and the two main stores are the general store and a gas station. Luckily the general store is geared towards hikers so resupplying was easy but very pricey.

We spent the rest of the day resting, relaxing, and said goodbye to Wolf who decided he was going home until the storm passed. At the end of the day, we saw a trickling in of familiar faces as hikers came in from the snow and cold. Caboose and Engine showed up as well as Earlybird, Captain, Sitting Bull, and JAM. We all had dinner together and talked about the weather and solidifying our plans for the storm. Before going to bed, I ordered a few cold weather items online to make me more comfortable on the trail. 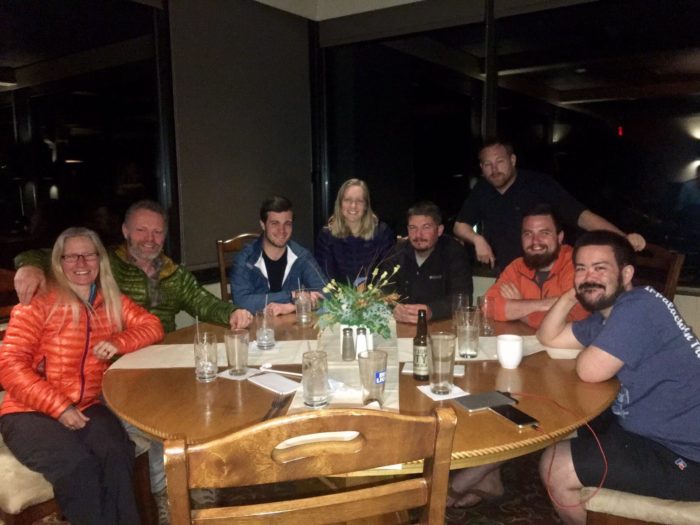 Today was another day of relaxing, but I’m starting to feel restless. Every day spent in the hotel is another zero day I could have saved for injury or spending time with Louis. I’m frustrated at the storm and although I couldn’t have predicted it, I’m frustrated at myself for not starting a week earlier and being able to cross the Smokies when it was 60 degrees and beautiful like it was last week. 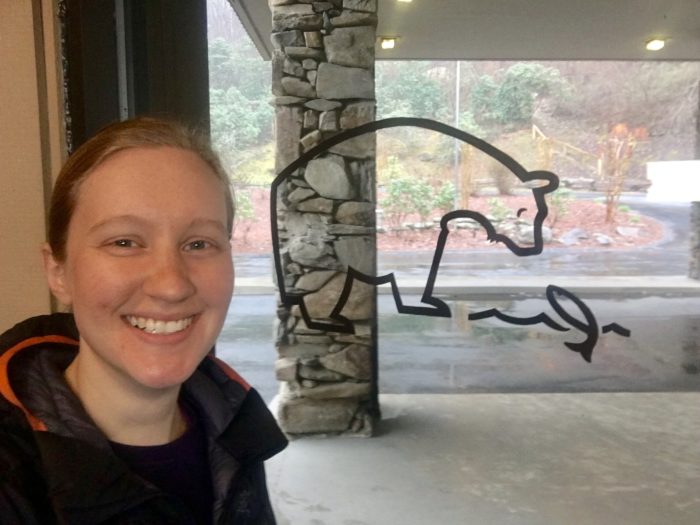 We took another short trip to the general store to buy a few remaining things and relaxed the rest of the day. After being limited on how much phone battery I can use in the woods, it was nice to be able to contact my family and write these journal entries without worrying about my phone dying.

In the afternoon, T-rex arrived drenched from head to socks. His socks still had clump of snow on them and he warmed them by the fire while he ran to the restaurant to get food 10 minutes before they closed. Our original Franklin group minus Acorn was together again! Acorn, like Dirtbag, was at the shelter dubbed the Hilton with a real shower and bathrooms. We got word that the hikers stranded from the storm along with college spring breakers was making the shelter way overpacked. 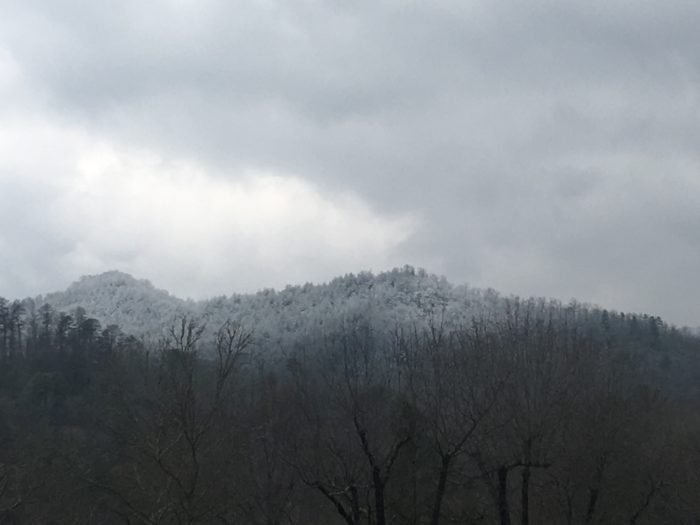 Grievance and I had a few beers before dinner and talked about the possibility of joining the Air Force to pay for medical school. We ate dinner with a new group of people (Monkey, Beast, and Pace), and afterwards hung out in the common area by the fire. I pulled out my felt backgammon board which I haven’t had a chance to use yet, and Sitting Bull and I played a few games. I got to FaceTime Louis before bed and watch the dogs play, which made me really miss home. Tomorrow my packages arrive!

This morning I woke up early and went to the common area to use the desktop computer. I needed to activate my school email and had some other busy work to take care of that’s much easier to do on a computer than my tiny phone screen.

I hung out in the common area most of the morning, drinking the lobby’s hot chocolate and coffee. Piñata and Rash had laundry to do and I needed pepperoni and cheese, so we headed out with JAM and Earlybird. The gas station down the street from the general store was big, clean and modern. We chatted with the ladies working there, hung out for a bit, then walked back the steep hill back to the hotel. 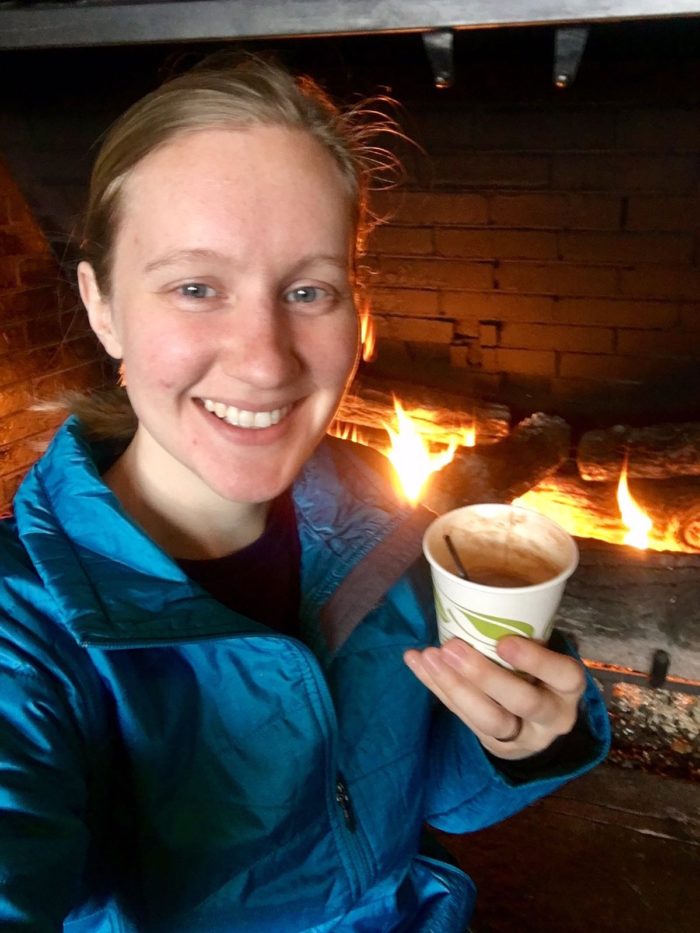 Once back at the hotel, I waited excitedly for my packages to arrive. Once they did, I collected my precious cold weather gear and tried it all out in the room. After feeling like Christmas morning opening my packages, I headed back to the common area and none other than Wolf showed up! He was back to do the Smokies. Wolf, Caboose, Engine, and Sitting Bull watched T-Rex open his resupply package from home. Instead of foil salmon packets, his mom had sent CANS of salmon! We all giggled at the idea of taking cans on the trail, and brainstormed ideas for him to take the salmon without the cans. We settled on opening the cans and putting the salmon in ziplock bags. 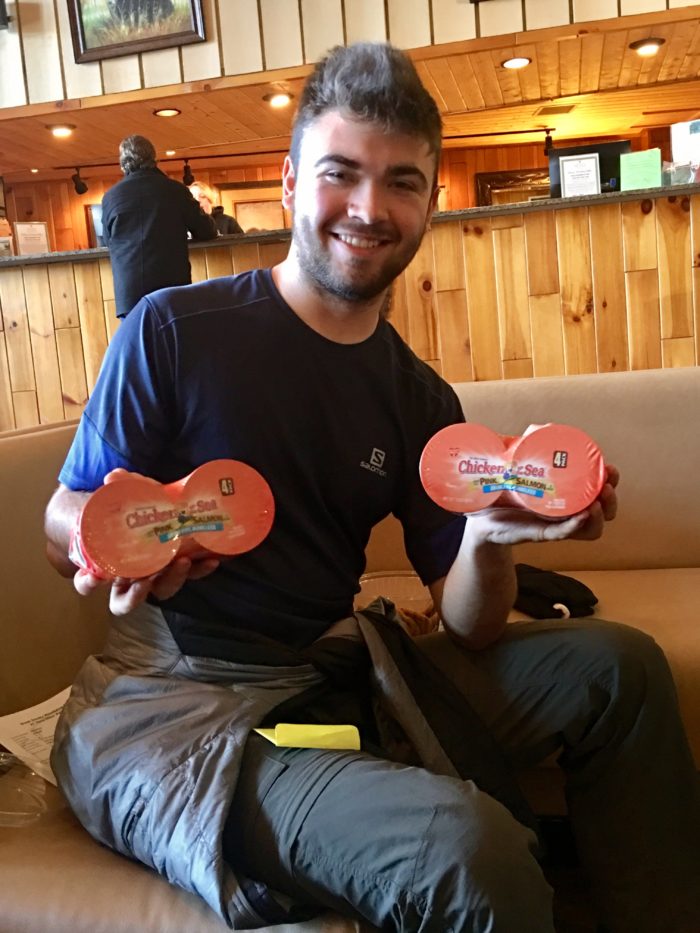 T-Rex with his cans of salmon

We had dinner which was a buffet since the hotel was short staffed from the snow. The buffet was an amazing last-real-food-for-a-while meal: salad, lasagna, spiced corn and rice, fried chicken, and chocolate chip cookies. We went back for seconds and thirds, trying to pack on the calories in preparation for hiking tomorrow.

Back in the room, I spent the rest of the evening packing and organizing. Since I added extra gear from my packages, what used to fit with extra room to spare, now was overflowing. I strapped my tent to the outside to remedy this.

Grievance, JAM, and I enjoyed one last evening together in the warmth and comfort of the hotel before facing the post-blizzard conditions of the trail tomorrow.