Every time we leave a town and head to the next one, I wonder if I’ll run out of interesting things to write about– if the trail will become too humdrum and boring for new stories to develop. I wondered if our hike to Bland would, indeed, be bland. But it was not!

Our hike started out inauspiciously enough with a scary story about a bear encounter rather than a scary encounter with a bear. Before leaving the ranger station near Partnership Shelter, one of the rangers told us that she once had been hiking in the Smokies and returned to the parking lot where she found the door of her car ripped off and a bear eating an apple inside! The doors and windows had all been shut but the bear still got in! Bears have very poor eyesight and equally poor hearing, but their sense of smell is highly developed. The bear that broke into her car was able to smell the apple in spite of the closed doors! And yet, I see hikers sleep with their food bags rather than hang them where bears can’t get them! 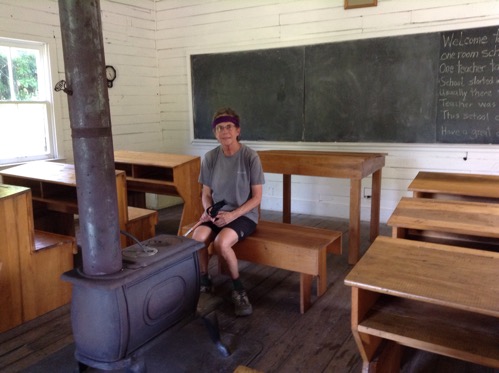 An 1894 schoolhouse on the walk to Bland

Our first day out from Marion wasn’t difficult, but after a few hours, my feet were killing me and I was eager to get to the next shelter and take a break. But, as we approached the shelter, we could hear loud voices. I couldn’t tell what was being said or if the person was angry, but I was wary. I thought maybe two people were talking loudly and the noise was just echoing through the woods. But when we arrived, there was just one man sitting alone at the picnic table in front of the shelter. Backfire and I both said “Hi”, but this man barely made eye contact or gave us a response. Something was not quite right, so we left quickly rather than cook dinner and take a rest as planned. Later, Backfire told me that the man had been yelling, “I WAS A DRUG LORD. PRAISE JESUS!” or something very similar and very odd. We were sufficiently alarmed by his behavior that we not only left the area, we walked all the way into Atkins and took a room at the barely-in-business motel right off the trail so we didn’t have to sleep in the woods that night. 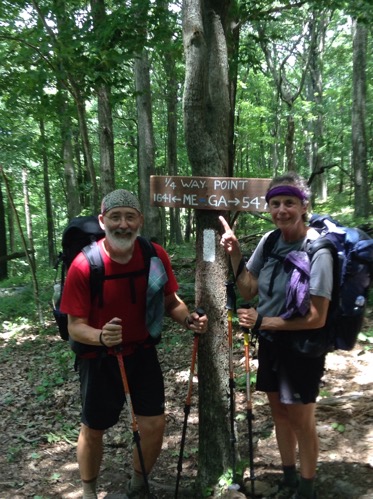 On our third night out, it rained. We were taken by surprise because rain wasn’t even in the forecast! So our clothes, that we had hung out on the line to dry, were totally and completely wet. Fortunately, it wasn’t cold or windy when we started walking because we would have been really chilly in those stinkin’ wet clothes! 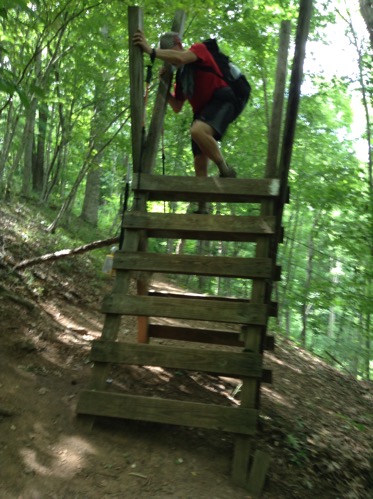 About two miles away from our destination shelter, we reached our last water source. It was pitiful–a teeny tiny trickle from a small pipe out in the baking hot sun. Collecting water was a slow laborious job that was severely complicated by the presence of bees. They were all over Mel and all over our packs. I moved away from Backfire, because he seemed to be a bee magnet, but unfortunately, the bees also found me. One got under my shirt and stung me–my second bee sting in as many weeks, and twice as many as I’ve had in my entire life! 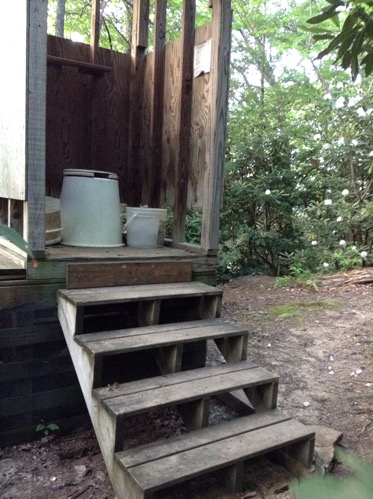 After getting water, we had another hour or more to the shelter. Even though it was a short mileage day, we had planned on stopping for the night once we got to the shelter. The rumor on the trail was that a storm was coming in –and we really wanted to stay dry so we didn’t have to put on wet clothes again! 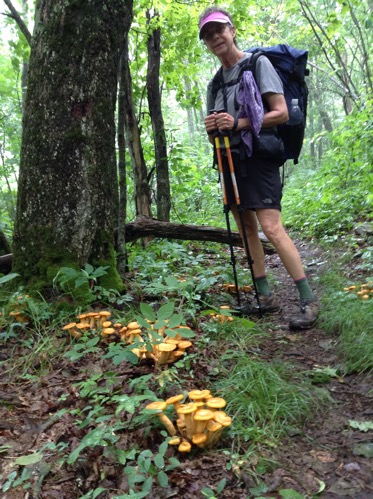 Backfire is not the only fungi in the forest!

When we arrived at the shelter, though, it was totally filled with young kids and their two leaders. My heart sank as I thought about having to sleep in the rain once again! One of the counselors must have read my mind because she immediately said they were just resting in the shelter and were drying out from the night before. They were going to set up their tents out in the woods! The shelter itself was at the top of an open bald, but it was a stone and mortar building with an actual door and real windows, so it would be plenty sturdy for a storm! Yay! 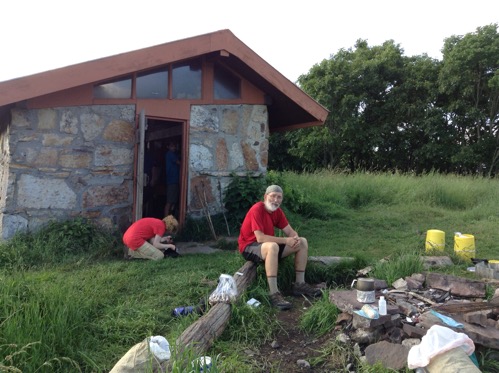 Inside, there were several wooden bunks AND a picnic table! I was a happy camper! But, not for long. Around midnight, the storms moved in. We didn’t get wet and we didn’t get hurt, but the rain and the wind and the lightning were so ferocious that they scared the hell out of me. It didn’t help that the roof of the shelter was made of tin because it magnified the sound of the rain at least ten-fold. I laid awake for hours worrying about those poor young kids in their tents, hoping they weren’t scared and hoping they weren’t getting wet. Needless to say, I did not sleep well at all. Once morning came, I was able to find out that the young campers had all survived the storm and had stayed dry. I guess they were somewhat protected by the trees because it truly was a hellacious storm. 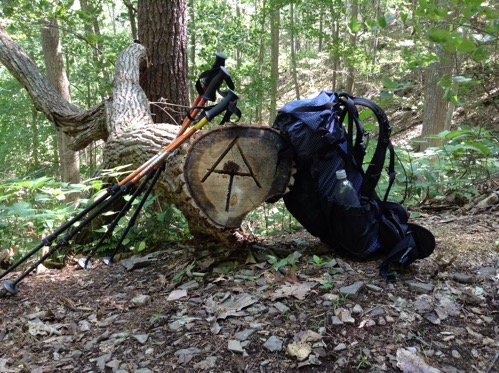 Taking a break close to Bland

The last night on the trail to Bland was the very worst one ever! Our tent is quite small. Most nights I wake up at some point to find myself squished against the tent screen. This morning, I was bolted awake by something brushing against my arm. All I could see was something white waddling away.

“MEL! I THINK THERE’S A SKUNK OUT THERE!” I whispered with panic in my voice.

Very calmly, Mel whispered back, “OK. Stay calm. You don’t want to piss it off!”

Not more than five minutes later, the skunk was back and staring me in the face through the screen!

“MEL!! IT’S BACK!” I whispered–trying not to wake up the other campers.

At this point, I was all but in Mel’s sleeping bag with him.

A few minutes later, I again whispered loudly, “MEL! ARE YOU WIGGLING YOUR FEET??”

Oh my god! My air mattress was flopping up and down and the skunk was under the tent!!

I was totally freaked at this point. My heart was racing and my hands were shaking. This skunk was either totally acclimated to people or rabid! It would not back off.

Not long after we had irritated the skunk enough to make it leave the bottom of the tent, it showed up on Mel’s side of the tent again and tried clawing and biting at the screen to get in! At this point, Mel punched him in the face–and still he came back! He punched him again! OMG! I felt like I was starring in a late night horror movie!

Finally, we decided that the best thing to do would be to get out of the tent and try to get the hell out of Dodge! Mel crept out first hoping to keep Cujo at bay while I got my hiking clothes on and packed up my stuff. He suggested that I get out of the tent on his side because the skunk was nearby under a log on my side. This meant that I would have to move my shoes from the outside of my side of the tent and pass them out to Mel on his side.
When I got out of the tent, Mel noticed that I had forgotten to zip the bottom of my side of the tent!! Cujo was about to get in! No more Mr. Nice Guy! Mel picked up a stick and started whacking that deranged beast on the head! After a good deal of whacking, the skunk backed off, but not quickly and not without creating a stink. He didn’t actually spray Mel, but he did spray something and the air was starting to stink.

We packed everything up as fast as we could. (Backfire found his shirt 50 yards away–the skunk had dragged it away before we had even gotten out of the tent!) It was now just barely light out and our tent neighbor came over to ask if everything was alright. As he did, the skunk was headed over to his tent! The nightmare wasn’t over!

By 6:30 a.m. we were running down the trail leaving our camping companions to deal with the stench and a rabid, deranged skunk!

We naively hoped that we would be leaving the whole smelly mess behind, but apparently, I was still carrying it all on my back–the smell, that is, not the skunk. My pack and my raincoat were outside the tent and near the skunk as Backfire was thwacking him on the head–they must have taken a hit! My backpack and jacket smelled so skunky that we despaired of ever getting a ride into Bland once we reached a road– or even getting a room in a motel! But then, an unexpected trail angel appeared! 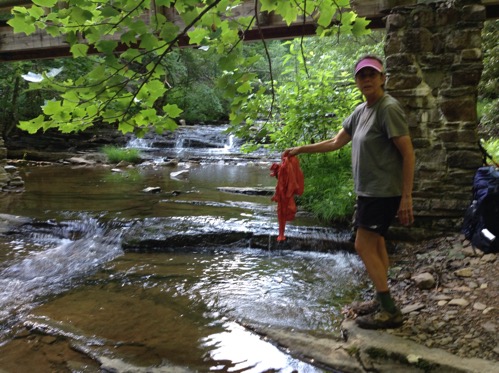 Trying in vain to rinse out the stink!

As we were walking down the trail, Backfire and I came upon a man sitting on a stump dressed in full Renaissance  garb–including a plaid kilt and  soft leather footwear. He had a woven basket on his back and a chainsaw at his feet–a strange vision indeed! He had come to do a little trail maintenance and enjoyed wearing his Renaissance gear. 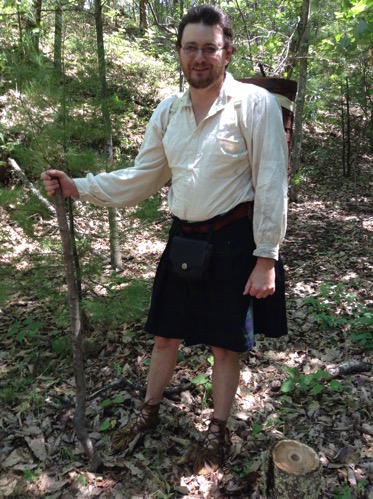 Backfire struck up a conversation with him, as he often does with fellow hikers, and quickly found many topics of interest to discuss. Because Backfire has so many things that interest him and he reads so many books, he is quite adept and talking to almost anybody about anything. One thing led to another in their conversation and our chainsaw-packing Renaissance man offered us a ride into Bland! When I asked this Trail Angel if he could smell any skunk on us, he very politely said, “Yes, m’am, I can.” And still he gave us a ride. Truly an angel!

Our walk to Bland, as it turns out, was our most turbulent section so far!

From the Spider Diaries