You know, I’ve read easily dozens hiking blogs that mention how wrong the statement “Virginia is flat” is completely and totally wrong. But I’ve never once actually heard someone say or read a blog that actually made that statement. Is this a myth that failed to live as long as its mythbuster? Or maybe the debunking of this supposed “myth” is really just a meme joke, like it started with mocking a statement that no one in their right mind would ever actually say if they’d hiked more than a few hours through the state?

Well, if that’s the case, let me join this memetic chorus by telling you, Virginia is certainly not flat. 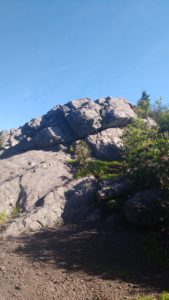 I actually ran into several bits of trouble trying to leave Damascus last week. First, I got an incredibly late start because I’d stuck around town trying to use the town wide WiFi to upload my last update for this site, but the WordPress app I use was simply not being cooperative. Finally, I got started so late I only managed to hike a few miles that first day, but at least I was “out” of Damascus. At least so that it wouldn’t be tempted to head back to Mojo’s for breakfast in the morning. 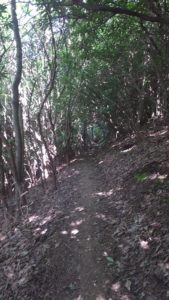 I can’t see you anymore, breakfast burritos, the Green Tunnel needs me

My second day out of Damascus was an even larger disaster. First I overslept and got a late start to the day. Then I found out the water source I’d been counting on had dried up. It got very hot that day and I was incredibly thirsty and felt very tired. I hiked on to another water source, but when I’d gone a while, I realized that I couldn’t hear my cook pot. It usually hangs on the side of my pack and bumps against the clips of the pack, sounding like a bell. I began to walk through my memory of the morning to remember if I put it somewhere else, then realized I’d left it sitting at my campsite. Since the majority of the food I carry is useless without this pot, I went back to get it. I climbed about a mile before I decided to set my pack down, thinking without it I could go faster and quickly run back to my tent site and get the cook pot. 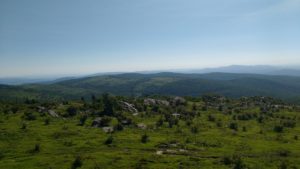 Instead of a picture of me looking sweaty and stressed out, here’s a beautiful view. You’re welcome

What I didn’t consider was that it was getting now to the hottest part of the day and by leaving my pack behind I was also leaving what little water I had left. I got back to the tentsite and was glad to find the cook pot still there. I grabbed it and started hiking back. Now going uphill, my lack of water began to hit me. I was very dizzy and felt my face burning up. I had to sit down a few times to get a chance to cool down, but I must have lost track of time because according to my clock, it took me several hours to get back. I met a trail steward on the way, who I realized was carrying my pack! He told me he’d had to chase a bear away from it and had waited for quite a while for me to come back and had assumed I’d abandoned it. I felt incredibly embarrassed to have put him out of his way because of my foolish decision to leave my pack unattended. I could have lost everything that day if he hadn’t come along. Let that be a lesson for you.

Sometimes a spring is the most beautiful sight you can imagine

As the days progressed in the early part of the week, I became concerned because I was worried I would run out of food before I could reach a resupply. I had purchased food in Damascus planning on averaging at least ten miles a day, and between my bumbling and a slower pace overall, I was looking at an average of 7 or 8 miles a day at best. I’d come into Damascus in high spirits, but now I felt like my steam was gone. I was feeling pretty down until I got to the top of Whitetop Mountain. As I stood there, a bird landed right next to me, close enough to touch, and sang to me for several minutes. It was like all the weight and worry was lifted completely off of my shoulders. 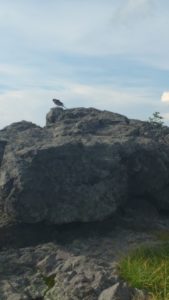 This actually set up the next few days for me. While those first few days out of Damascus were some of the hardest I’ve had, the miles between Mount Rodgers and Marion, Virginia were probably the most glorious. Amazing views, friendly people, and hiking that was challenging but not punishing. 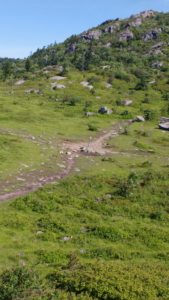 Alright, let’s not bury the lead any further, we gotta talk ponies. 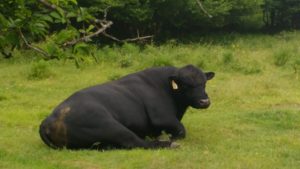 Pictured: Not a pony, but still beautiful #bodypositive

My first view of the ponies was when I was coming down from Thomas Knob, I crossed over some rock formations and began to feel like I was walking through some kind of faerie wonderland. Open grass fields spotted with fantastic boulders, rhododendrons in bloom, petals falling to the ground carpeting the Trail like some kind of romantic welcome. Then I turned a corner and spotted the first herd. 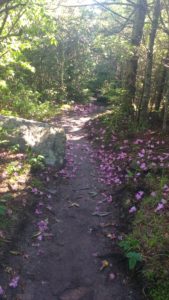 I imagine Gene Wilder singing as you walk down this path

They were running and playing, manes flowing in the wind. Tiny foals were quite literally prancing back and forth between the legs of the adults. I fought the urge to clap my hands and squeal like a fourteen year old Japanese school girl. 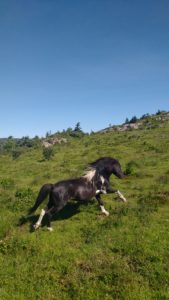 I understand now why there are so many signs reminding you that these are wild animals and should not be fed or petted, because as soon as I saw them it was all I could do to keep myself from chasing after them to pet and play. 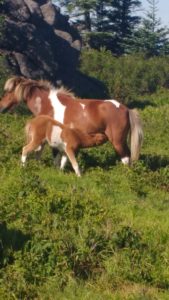 So, like a responsible adult hiker, I moved on and started walking North. Then I came over another hill and this guy sees me. He’s standing right in the middle of the Trail. He sets his sights, and he comes right for me. 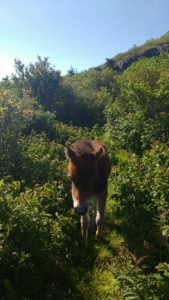 This foal couldn’t have been more than four feet high, walked right up, and started licking my arm. I giggled. I smiled. Chills went up and down my spine. I was bad and went ahead and petted him anyways, because at that point I simply could not restrain the urge any further. He nibbled on my arm at one point, but it was totally worth it. 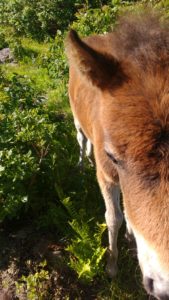 Look, I’m a 34 year old man. I have a beard. I’ve changed the oil on my own car. I’ve gone hunting and fishing. I fit several stereotypes of manly. Yet I still couldn’t get over just how gosh darn cute these things were. It’s like walking through that rhododendron tunnel had taken me somewhere completely other, and I wanted to soak up all of the absolute pure joy to be had there.

I honestly can’t understand why the Smokies are the most visited Park in the country when a place like the Grayson Highlands exists. This really did feel like some magical world to wander through. After the ponies, there were bubbling brooks to cross, then a herd of longhorn cattle to walk through. They looked intimidating, but completely ignored you, and I had a surreal experience passing through a group of them as my hind brain kept screaming to run because one of these things could turn me into pudding with minimal effort while my only defense was a pair of relatively thin and fragile trekking poles. 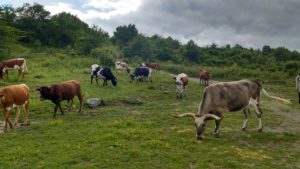 Of course, after the emotional highs of the Graysons, it’s only natural that I’d have a bit of a downer day. I had a moment then when I was honestly feeling pretty defeated. I had been doing the math and realizing just how likely it is that I’ll never make it to Maine before the season is over. I could try a flip flop, that is going up to Maine early and then hiking south to the point of my departure, but at this point that would mean stretching my hike out to as much as 8 months. I’m already feeling homesick and the loneliness threatens to drive me crazy some days when I haven’t seen a familiar face in months. I was feeling beat down and honestly hating myself. Then I stopped at a spot on the Trail. I looked around, and I had this overcoming sense of awe. Which is strange, because this spot honestly wasn’t anything particularly special in comparison to the previous days. But I looked ahead and I saw that White Blaze, and I saw the trees around me and heard the birds above me. I thought back to a distinct memory years ago. I was working in an office as a low level manager for a tech support call center and I was talking to a peer. We were complaining about the latest round of office drama, feeling like we were unappreciated and overworked. I remember commenting to her that I wanted to quit my job go hike the Appalachian Trail. I remember thinking afterwards how ludicrous that would be. After all, at the time I was still in a depressive spiral from an ex leaving me, and I’d compensated with over work, alcohol, and overeating. I was swiftly approaching four hundred pounds and I was mentally, emotionally, and physically miserable one hundred percent of the time. Now here I am, years later, standing on That Trail. That’s a White Blaze in front of me. I can’t say what will happen. I may not know yet what I’m going to get done, but I’m here to tell you that if you get to hike any portion of this trail, you’re winning, and I really hope to see you out here soon. 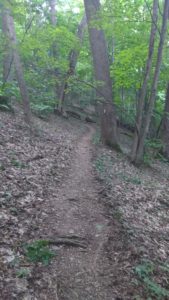