It’s now been four months since I started the Appalachian Trail. Some particularly fast hikers would be done by now. Many more who started when I did are in northern Pennsylvania by now. But I’m not quite halfway through Virginia.

And I wouldn’t trade it for the world. 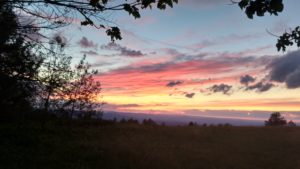 I find it strange that I’m catching myself in conversations now with section hikers where I’m taking the role of “experienced knowledgeable hiker.” Talking about gear I’ve liked or not, comparing sections of the Trail, giving advice on the best trail head for reaching a particular point, at no point did I make a conscious effort to behave that way, I’ve simply found myself more and more in conversations where they have questions and I just so happen to know the answers. Inside I still think of myself as the fatso IT guy (indeed, even after the significant weight loss of the Trail, I’m still very chubby, a mark of just how overweight I was when I came out here) It’s amazing how quickly a few months living on the Trail can change you, often faster than the psyche can keep up with. My internal picture of myself doesn’t match quite who I am anymore. I actually have had a few instances of looking in the mirror and not recognizing who it was looking back. It’s an incredibly strange, and even frightening, feeling to stare at that polished piece of glass in the public restroom while your mind runs in circles “That’s me” “no, that can’t be me” Turn around “Well, there’s no one else in here, so that’s me, but it sure doesn’t look like me” 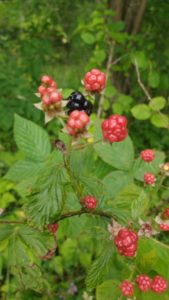 I’m still finding myself completely fascinated by random bits of wildlife along the Trail. I stopped to gaze at a black snake as I went by. It apparently paid me no mind as I got within half a foot of it to simply sit and watch it taste the air looking for prey. I’ve also seen a lizard scurrying along a mountain top, and plenty more spiders and other creatures that remind me just how fascinating the high woods can be. 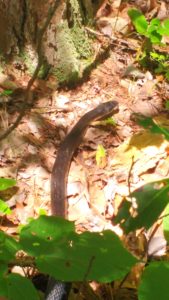 Pardon me sir, but do you have a moment to talk about our lord Thulsa Doom?

I did have one major creature encounter this week that excited me, I saw my first bear! Coming along Kelly Knob, there were two of them sitting next to the Trail, but they took off running as soon as I turned the corner. It was odd, because it took my brain a second to catch up with what was happening. They were each about 3-4 feet high at the shoulder, and were not only running along but had their mouths hanging open, so for a second my mind filed them as really big dogs, and I actually had an incredibly brief desire to pet one. As they lumbered away and my brain shifted into gear, I was overcome by just how thankful I was to be there and to see them. They were beautiful creatures and the fact that I was standing merely ten feet away from an animal I normally would have no hope of running into outside of a zoo in my normal life just brought home in a completely new way how awesome an experience it is to be out here. 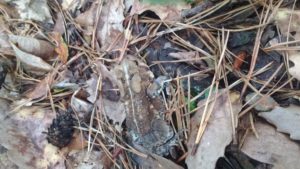 The bears ran away too quickly for me to get a picture, so here’s a toad, just pretend it’s a bear

It hasn’t all been peace and rest though. I’ve definitely had some hard days this week. Only once or twice have I been able to go an entire day with dry socks as periodic Thunderstorms have pretty much been the norm. I’ve had enough days of struggling to find water though that I cat bring myself to be too grumpy about the rain. At least I have to spend less time worrying about dehydration. I did have a scary afternoon when a thunderstorm came in as I was spending a few miles walking along a ridge. The day started off as blue and beautiful as a certain ELO song, but quickly turned dark. As the rain came down, I found myself hiking through a patch of smooth and slanted rocks, seemingly designed to risk my falling down to the valley below. The rain only exacerbated the issue, making me slow down to test each individual step before shifting my weight, hoping to avoid a dramatic tumble. I don’t think I’ve ever been so excited and relieved to find the end of flat ground. 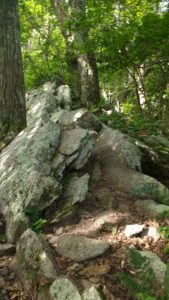 Hey look! It’s like a slip ‘n slide, except there’s death or injury at the bottom (so pretty much EXACTLY like a slip’ n slide in my neighborhood growing up)

I also experienced some personal losses this week. My shoes, which had been purchased in Franklin, have finally bitten the dust 600 miles later, splitting down the side, not to mention several other holes and an increasingly thin tread. I’ve switched them out for a pair of trail runners which I’m particularly excited to break in. 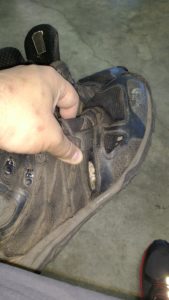 Pour one out for the old friends. Then set em on fire, cause that smell is never coming out

I’ve also replaced my pants. The seat of the pants have ripped several times, leading to multiple hack stitch jobs done by me using random sewing kits in various hostels. Finally, the legs tore in two as I was climbing up a particularly rainy day. I’ve decided to switch to a hiking kilt from Mountain Hardware after talking to several other hikers who spoke highly of the comfort of the item. I was pleasantly surprised to find that my waist size is now 16 inches down from where it was when I started. When I go home, for the first time in my life I’ll be able to find pants in Walmart without having to dig through the extended sizes boxes. 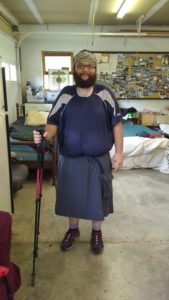 I’m not sure who this guy is, but he’s wearing my clothes

Overall, I continue to be enjoying my time in the Trail and continuing to experience personal transformation. I may not be the fastest person on the Trail, but I’m still on the Trail, and I wouldn’t trade a minute of it. 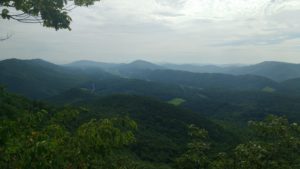 “Wherever you go, there you are”- Is it too late to change my trail name to Buckaroo Bonzai?