Week 17: The Forests of Mirkwood

Oh the joys of hiking in late July! 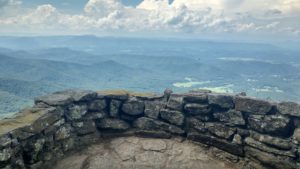 I completely lost track of June, and now I’m stumbling into August!

I think I’ve discovered a new level of stink this past week. I’ve soaked my shirt through with sweat every day from the 90+ degree heat, but never get dry because the humidity has been insane. Occasionally the days are broken up my afternoons of rain, but it only seems to cool things off for an hour or so at most, and rather than cleansing me of my smell, I’m simply gifted now with a nice sheen of mud to match. I finally got a shower after a little more than a week. Out of the frustration and desire to be clean, I went overboard and shaved off my beard. This has not helped the issue I’d previously mentioned of not recognizing myself in the mirror. Thankfully I am descended from an ancient line of bearded men and my facial hair will return to its proper state in a few weeks at most. 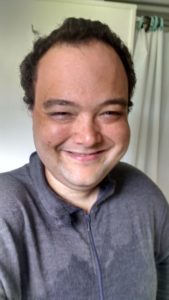 I have no idea who this guy is, but he’s clearly up to no good

In addition to the odorous issue, I’ve also been victim to the plague of No-See-Ums, a miniscule biting fly species that apparently finds me delicious. I regularly coat myself in DEET spray to avoid the things, but the moment the spray wears off, they’re on me like the piranhic creatures that they are. This has included a few occasions when I chose to sleep in a shelter and woke up in the middle of the night serving as the main course of a family get together of no-see-ums, midgies, sand flies, and punkies, my pre-bedtime application apparently having worn off. This was aggravated by the fact that I ran out of DEET the few days before I got to town and had to spend several hours simply being consumed by the little buggers. In a moment of madness, I took the blade of my pen knife and scraped it along my legs and arms to finally feel like I was scratching well enough. Unfortunately, this left my legs in particular looking like I’d been afflicted by some biblical era skin disease, the result of worshiping some false god or stealing my neighbor’s vineyard. 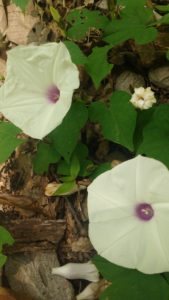 I am not including a picture of my scratched up and bleeding legs, instead here’s some flowers from beside the Trail. You’re welcome.

I also continue to feel increasingly homesick. I definitely miss my friends and a more normal life like being bathed every day and being able to cook dinner and enjoy a quiet evening in a soft chair with a good book. 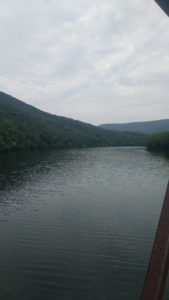 I don’t understand why this river doesn’t have WiFi

So of course it seemed appropriate to start listening to the unabridged audiobook for the Hobbit by JRR Tolkien. By far one of my favorite books of all time, I’ve long felt a special kinship with Bilbo, but especially so now. I know his feelings as he sits in the rain trying to find a campsite or hiking over a mountain ridge in a dreadful thunderstorm. (though fortunately I’ve not seen any stone giants tossing boulders during such storms) I’ve often regretted leaving my pipe and tobacco behind at home I quit smoking a few months before starting my hike, trying to “get in Trail shape.” I think often of the pleasure of a home cooked meal and a glass of bourbon. 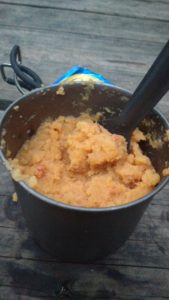 But Bilbo grew through his journey and I have too. I’ve spoken before about the dramatic weight loss I’ve experienced, but I’ve also greatly enjoyed the chances I’ve had to read extensively, I get through about three or four books a week, thanks to a combination of audio books while hiking and reading my kindle app at the end of the day. I’ve read up on such topics as history, economics, theology and Biblical Studies, and popular science. I feel like I’ve spent more time learning than I have since I finished college years ago. It’s been an amazing experience to stretch both my body and my brain on a daily basis. 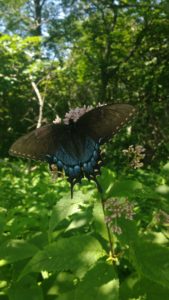 I’d like to include a picture of Reading Rainbow’s LeVar Burton, but he’s not out here, so here’s a picture of a butterfly instead

I’ve also thrived from forcing myself to write every day. I don’t always write much, but I get a few paragraphs down just about every night. (I must admit that I occasionally fall asleep before any writing can be done) I used to fantasize about being a writer when I was a kid, but I honestly never had the discipline to pursue it. While I must admit it’s a completely different practice to do so in a context where I not only have practically nothing but time on my hands as well as something genuinely interesting to write about almost every day, I feel like it’s a great first step in that direction. 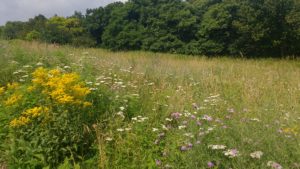 Dear diary, today I decided I really need to look up some synonyms for “walk”

I still get moments of small fascination though. Twice in the last few days, I’ve come across a turtle trying to cross the Trail. This is particularly exciting for me because when I was a kid, I had this fascination with wanting to see a live turtle in its wild environment. This was largely due to the fact that I grew up in the 80’s and was fixated on a certain quartet of cartoon turtles with Renaissance artist naming conventions. Unfortunately, despite growing up in the country, for some reason I never got the chance. I remember several occasions when I’d be told a turtle lived in a certain spot or had just been seen by a particular pond, but when I investigated, no turtle could be found. So when I come across them here, I make sure to stop and simply gaze for a bit, taking them in. Depending on where they are, I’ll then move them off the Trail to ensure they aren’t kicked or stepped on by some errant speed hiker. 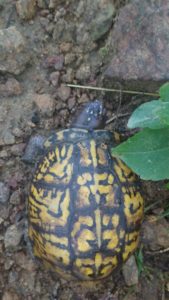 He was way too quiet and anti social to be Michaelangelo, so I think this was Raphael

I’ve also been fascinated a number of particularly large spiders chilling out in shelters, blessedly culling the local mosquitoes and biting flies population. Again, this is an experience that would surprise younger me, though in a less positive manner. I was always terrified of spiders after I got bitten by one and went to the hospital with a swollen hand as a kid. Now I force myself to look at them from a safe and respectful posture, smothering my terror with curiosity. I’ve often wished I’d taken some kind of biology refresher course before coming out here, particularly in identifying creepy crawling things, because I can sit in a privvy and spot three or four distinct species of spider, but have little or no knowledge of what I’m looking at. Nevertheless, they’re remarkable creatures and I hope they continue to work to reduce the dreadful level of the flying biting nuisances. 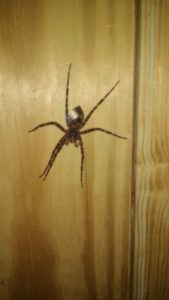 I’ve learned to not be afraid side track when necessary. Climbing Apple Orchard Mountain, I took a 1.2 mile side trail despite massive temptation to skip it. It was the end of the day and a 3,000 foot climb had left me exhausted, but I ventured down the blue blazes and found a campsite next to some cascades. I woke up early the next morning to venture further down, where I found the viewing deck for Apple Orchard Falls. I spent my morning sitting and listening to the rushing water and smelling the wet air. I watched the rocks being beaten by the falls and imagined them slowly being worn away before my eyes. I added an extra 700 ft climb back up to where I’d left the Trail, but it was so worth it. 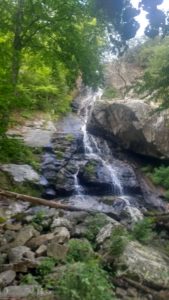 I also had an encounter with a blue belly eastern fence lizard. She ran up the side of a tree as I was coming down the path, but stopped halfway up the trunk at just about eye level. This gave me a great chance to sit and stare, looking at her scales, moving to follow her eyes, and most of all her beautiful blue belly. I resisted the urge to pick the lizard up and simply enjoyed watching it as it watched me. 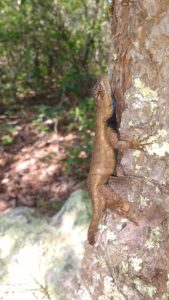 Her skin is in better condition than mine

So with all considered, despite some rough conditions, I’m still loving life here on the Trail. I soak up the great minutes and let them balance out the pains and frustrations. It won’t be long before I’ll have to return to civilization, with a glorious shower every day, but doubtless hours at some desk and wrestling excel sheets for a living again. 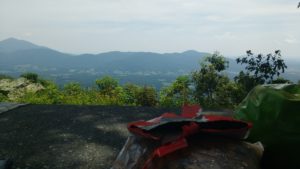 Who needs a desk?

“The road goes ever on and on”