Week 2: Keep on Keeping On

I started my week with Blood Mountain.

Stories say that young Cherokee men as a right of passage would travel to the area where they’d complete a ceremony then climb Blood Mountain where they’d receive a vision of who they were meant to become. In a way, I think I’m on a similar journey. At the age of 34, I’ve reached a point of uncertainty with my career, doldrums in relationships, and general malaise, so coming here to the mountains has been an excellent chance to break out of my box and ask some personal questions.

Most of those questions this week have consisted of, “James, what in the world were you thinking?” 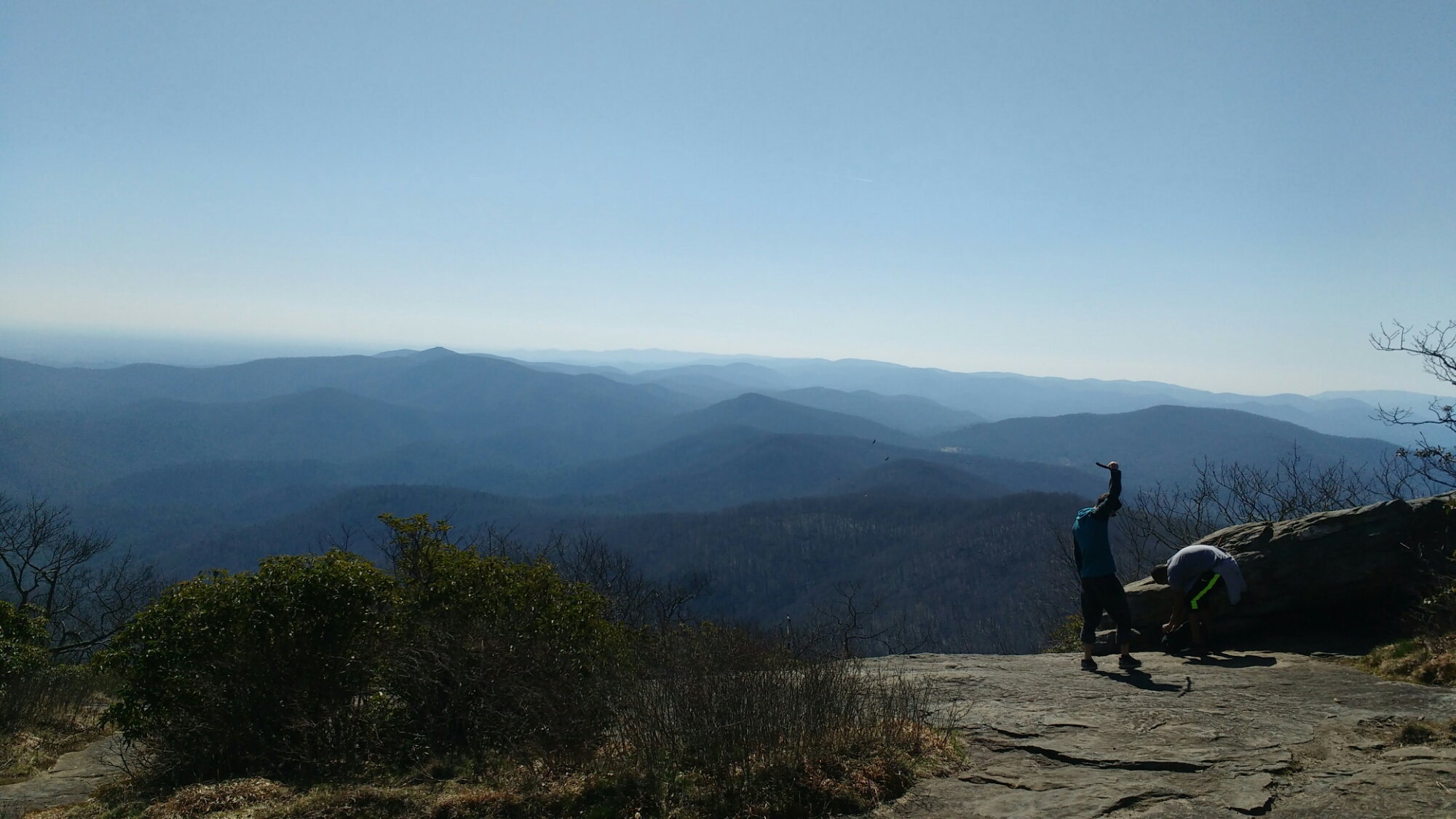 View from the top of Blood Mountain

When I finished the day, Mountain Crossings was waiting for me. A good night sleep in a bunk, a shower, and in the morning a breakfast of cheese and summer sausage. I stopped for a shakedown before starting out. This was the second shakedown I’ve received. The first was at Woody Gap from Sir Packs A Lot, but I thought it would be valuable to get a second perspective. I couldn’t help but laugh when the gent in front of me explained to the staff member that he needed deodorant because without it he wouldn’t get laid. 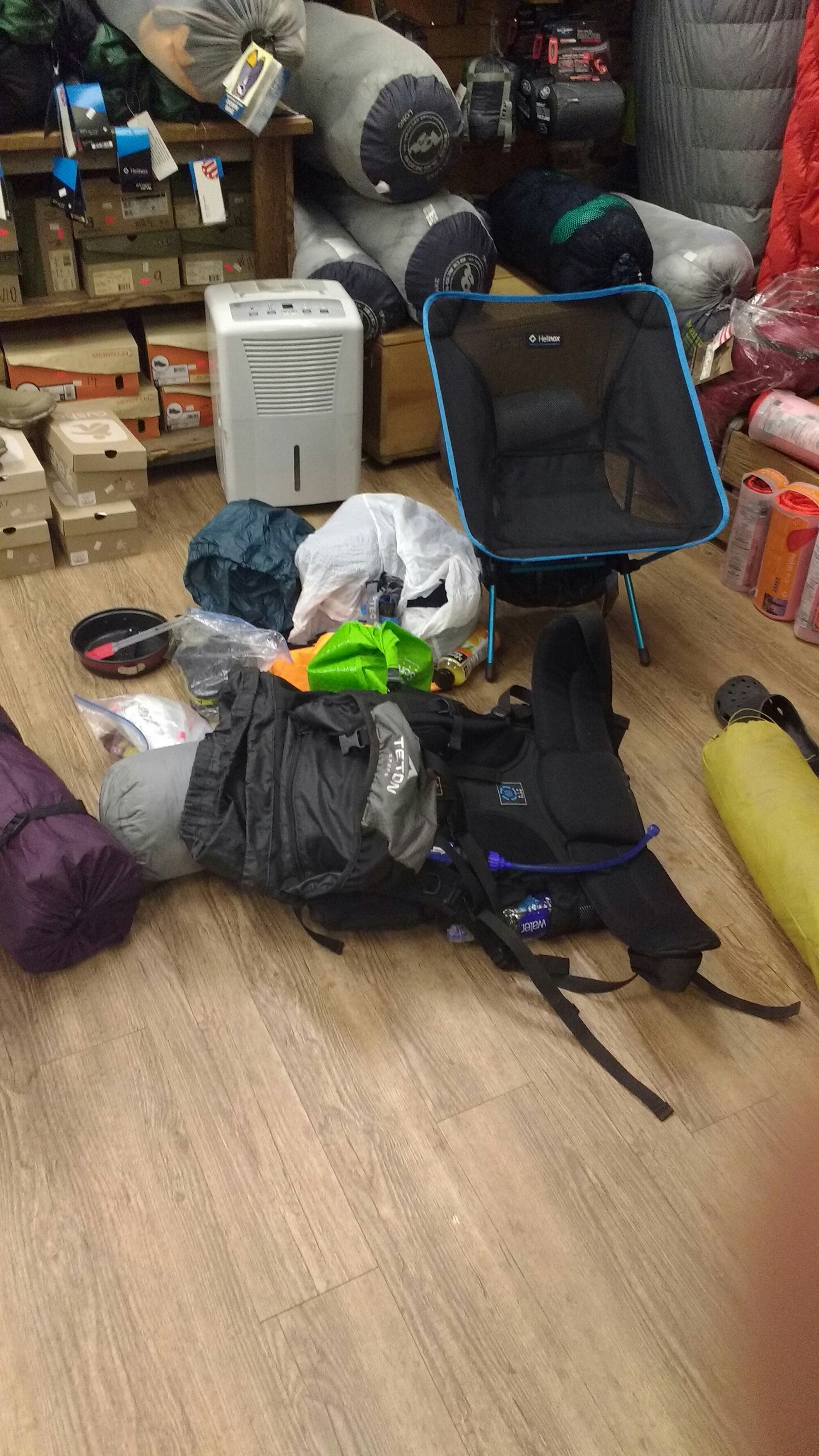 My pack explosion in preparation for my shakedown

I started my journey as a 5’6″ tall, 330 pound, severely overweight worker in the IT field. I’ve missed my Netflix and delivery pizza more than I expected. However, I’ve traded them in for some beautiful views, some personal challenges, and excellent quiet time.

My prayers have been a consistent focus this week. I’d chosen a Bible reading plan before leaving, called the “Professor Horner’s Bible Reading Program” which consists of ten chapters a day from a variety of part of the Bible. I’ve been thankful for this thus far as a way of focusing myself both in the morning and the evening. My prayers, on the other hand, have been far less planned. I had intended to follow the “Divine Hours” by Phyllis Tickle as a prayer regiment. That hasn’t happened. Instead my prayers have been more along the lines of:

“Shit, it’s an uphill again. Oh dear God, how am I going to climb this? What was I thinking? God help me climb this mountain. Father help me keep going. I am so tired. So sore. Oh thank you. I’m finally up here. Oh no, now it’s a downhill again. Here we go.” 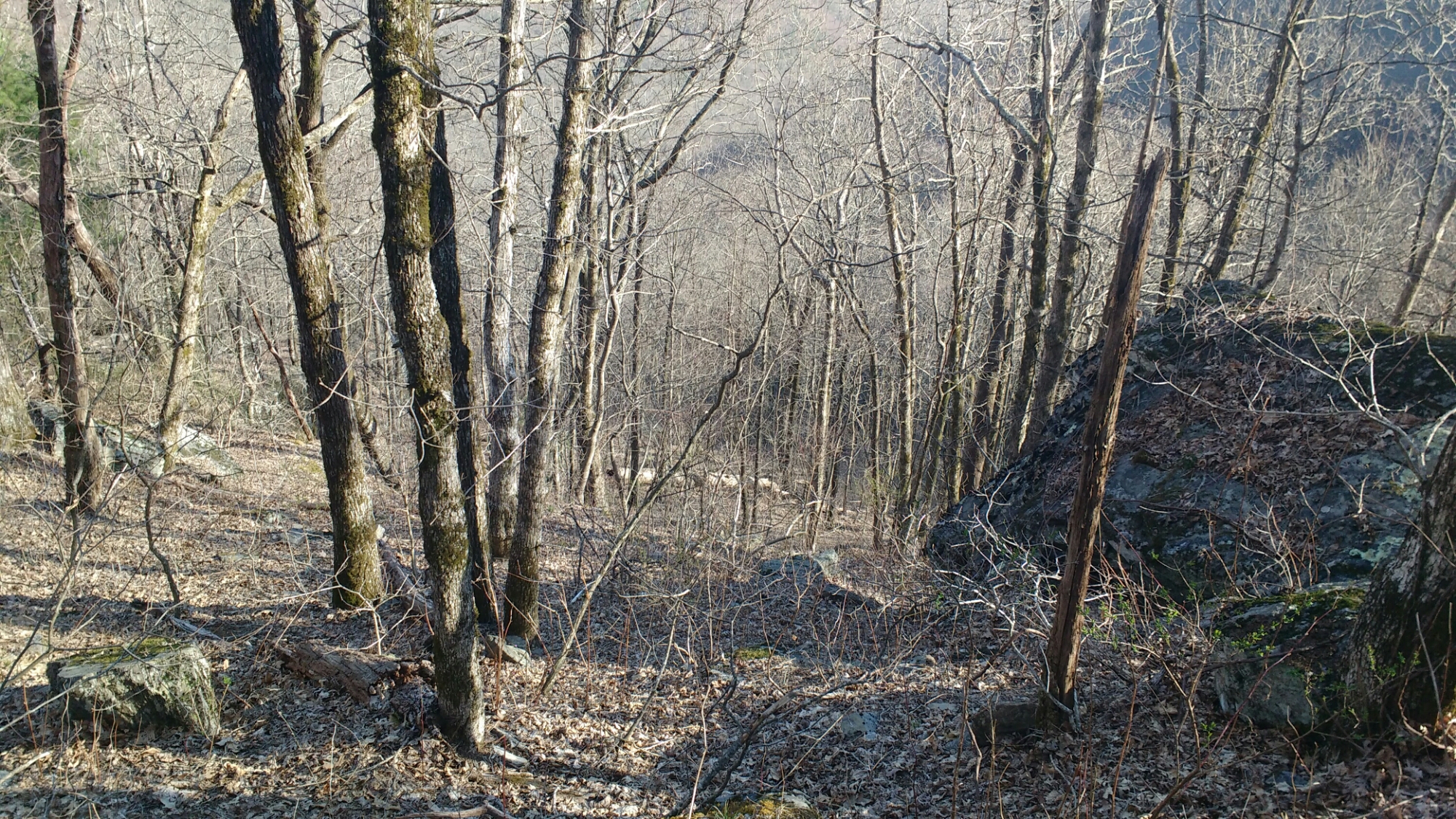 "How did I get up here again?"

I spent a night at Whitley Gap Shelter, which was a fascinating journey all it’s own. The shelter is rarely used since it’s well over a mile from the Trail itself, and requires crossing Wildcat Mountaintop besides. This means that the walk to the shelter as well as the evening there was a night of solitude. Again, plenty of conversations with both myself and God, as well as random daydreaming. (I thought up my own dream cast for a Justice League movie during a hike the other day that I felt would properly set it apart from the standard Hollywood fare while still telling a story that didn’t feel like it needed to apologize for the source material. I expect a call from Warner Brothers any time now.) 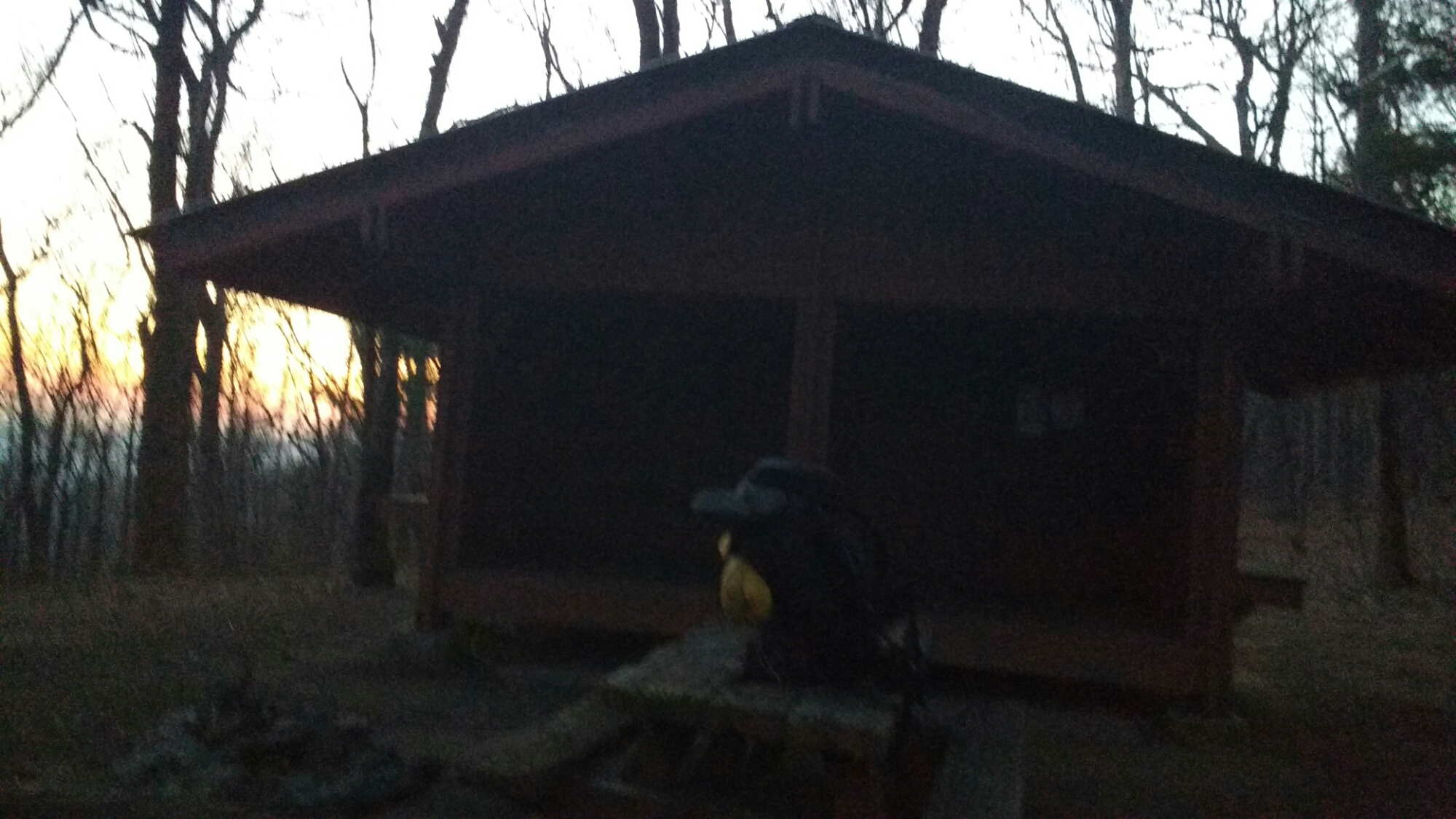 An empty shelter at sundown is actually pretty eerie

I spent another night at Blue Mountain shelter this week just as the rain came in. It was a fascinating evening that illustrated some of the things that I’m loving about shelter life. Some local guys were up hiking for the weekend along with several of us thru hikers, including a gentleman known as “The Spaniard” who was in his sixties and had already hiked the Pyrenees, the El Camino, and the PCT. Conversation lasted well into the night (knowing that nine o’clock is late for hikers). The clouds had been slowly rolling in for a while, but after dark they hit. There’s an odd feeling when facing rain as you’re in the midst of the clouds themselves. Everything I had was covered with a fine mist and I felt water condensing on my skin when I woke up in the middle of the night to walk out for a bathroom break. 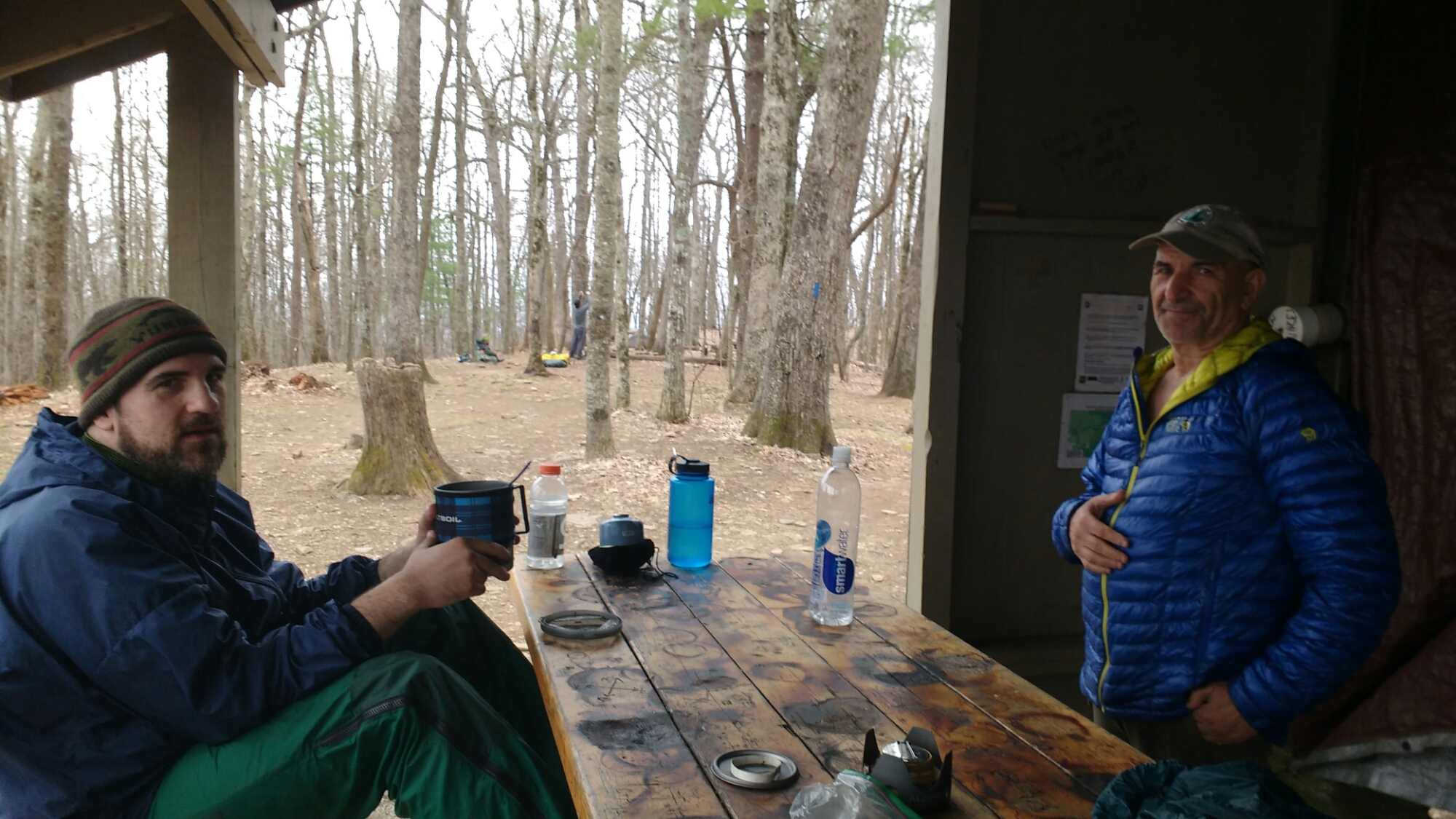 Conversation at Blue Mountain shelter. The Spaniard is to the far right

I ended my week at Top of Georgia Hostel, just down the road from Dick’s Creek Gap. I have to say, the staff here has been incredibly friendly. I firmly believe that a Congressional medal should be issued to the wonderful woman who does laundry for the hikers passing through, and the morning pastries are delivered from the gods. 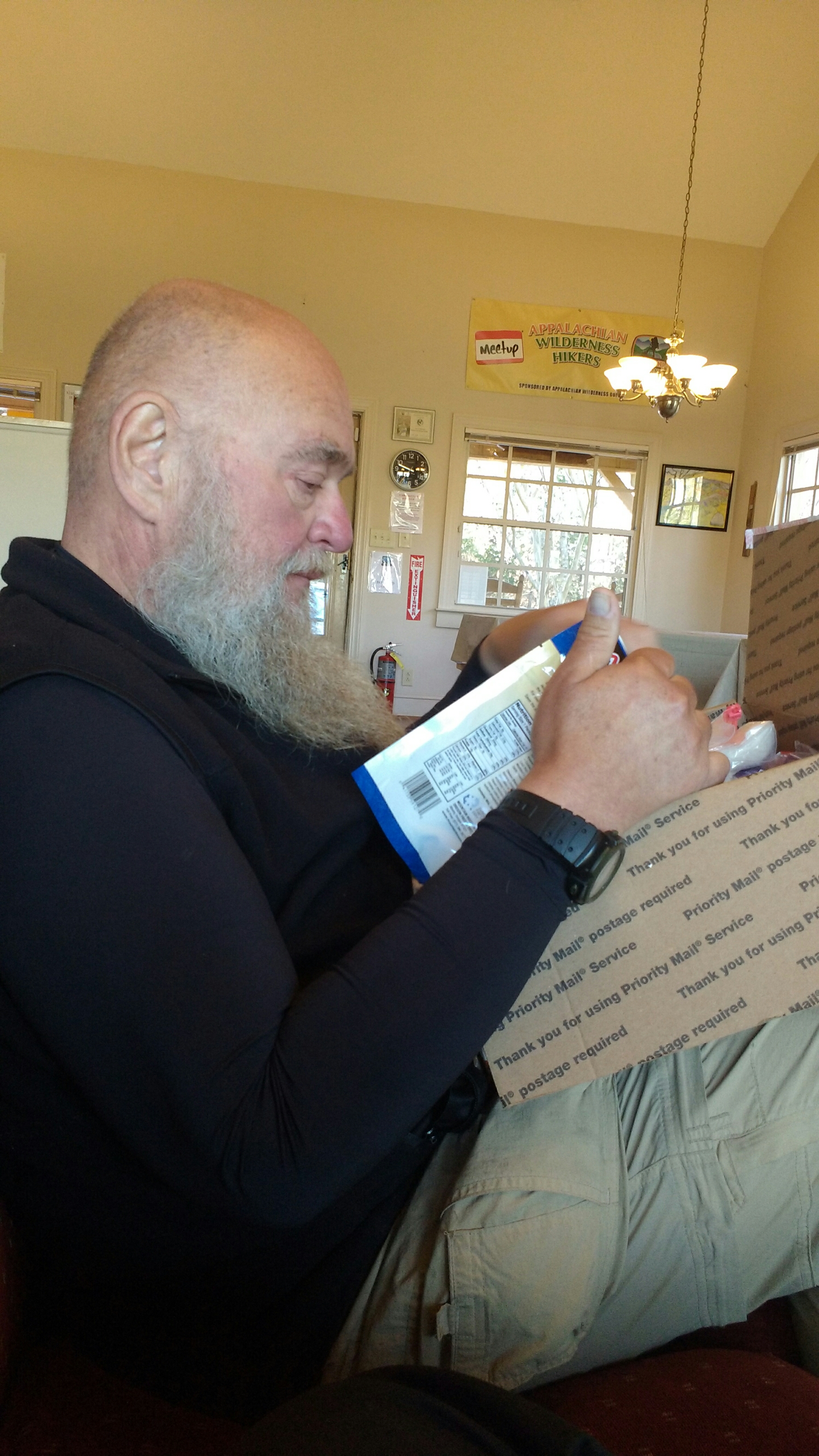 NoMan enjoying his mail drop his wife sent him

While in town, I weighed myself at the drug store and discovered I’d lost 23 pounds in the last two weeks. I’ve crossed over 6 mountains so far by my count. I’ve slept beneath the stars. I’ve drank water from fresh mountain streams. I’ve walked with trees and breathed fresh air. To paraphrase Captain Reynolds, I have done what for me is the impossible, and that has made me mighty. Whether I finish the Trail or not, no one can take that from me.