After a pleasant couple of days in Hot Springs, I returned back to the trail for the 70 miles to Erwin, TN. The weather has been beautiful which has made for pleasant hiking. I also hit the 300 mile mark. Unfortunately the dryness has led to several forest fires along the trail including outside Hot Springs. Trail rumor is that they’ve evacuated the trail and you can’t really get in or out of Hot Springs. They’re camping people behind the Dollar General. Guess I left in the nick of time. 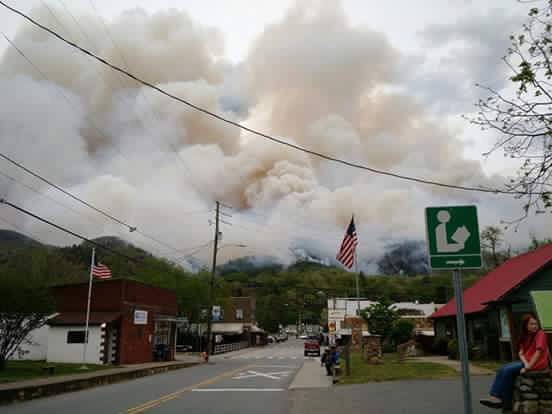 Now for great views from the trail. 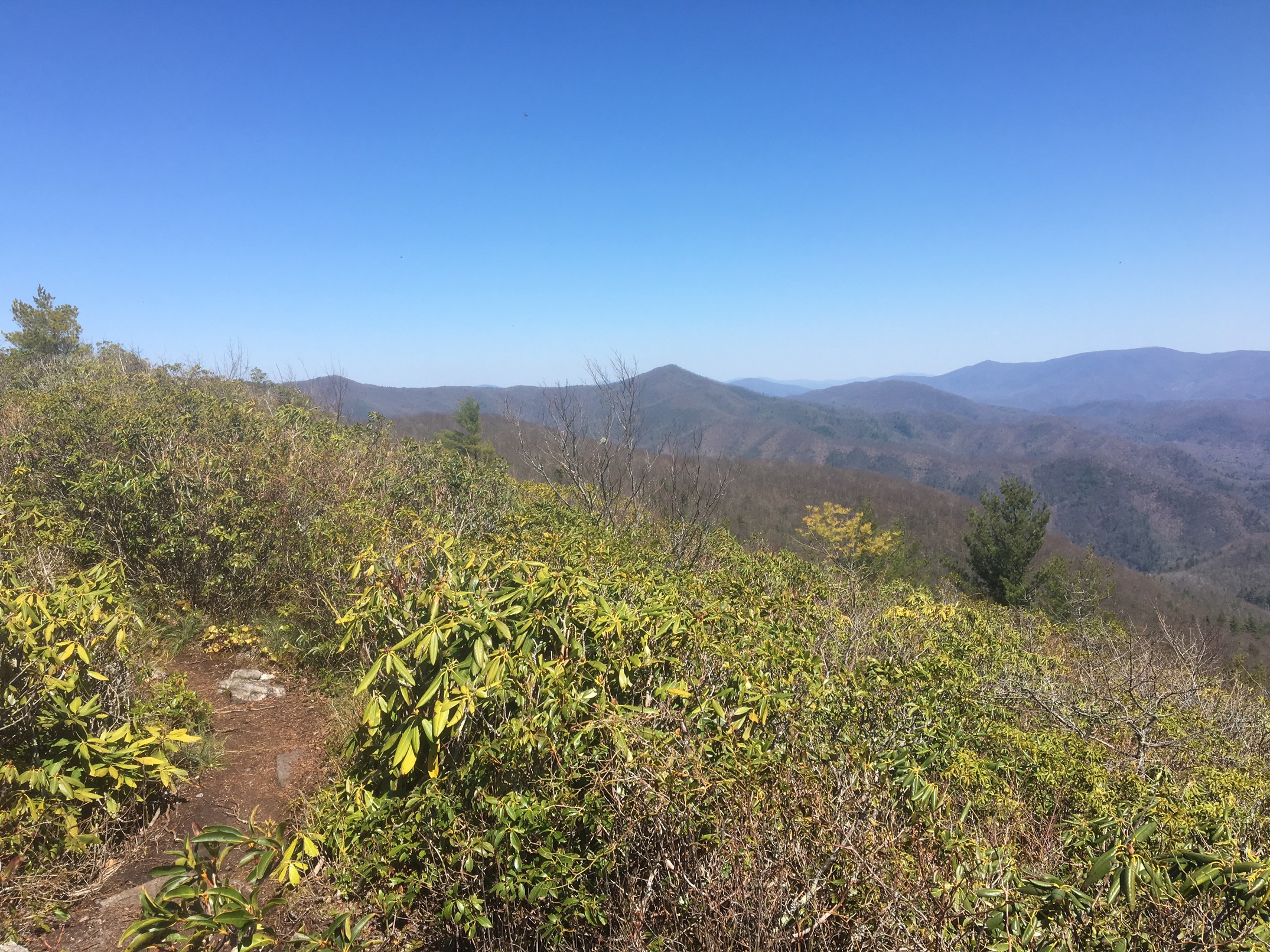 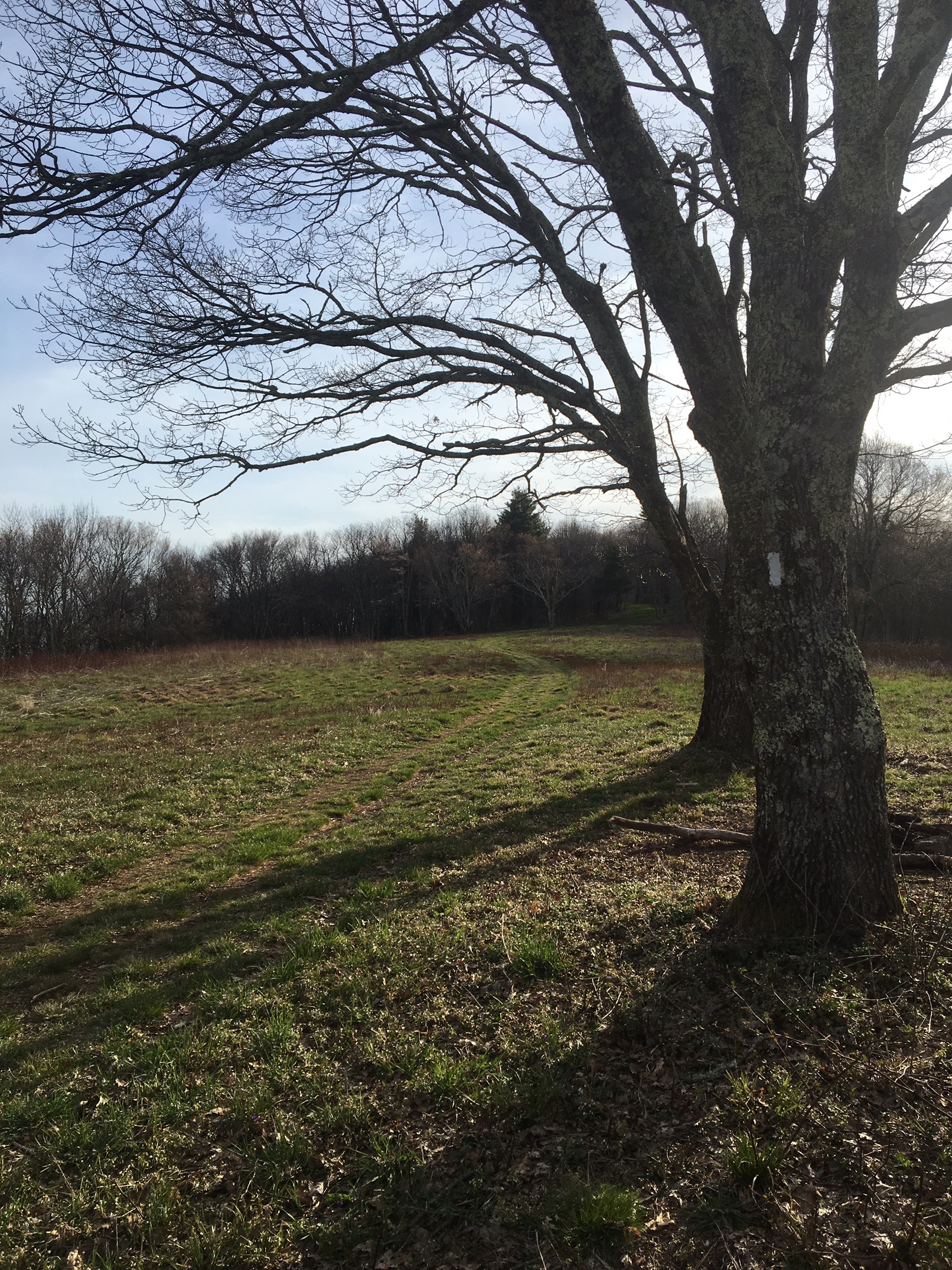 Balds are my fave 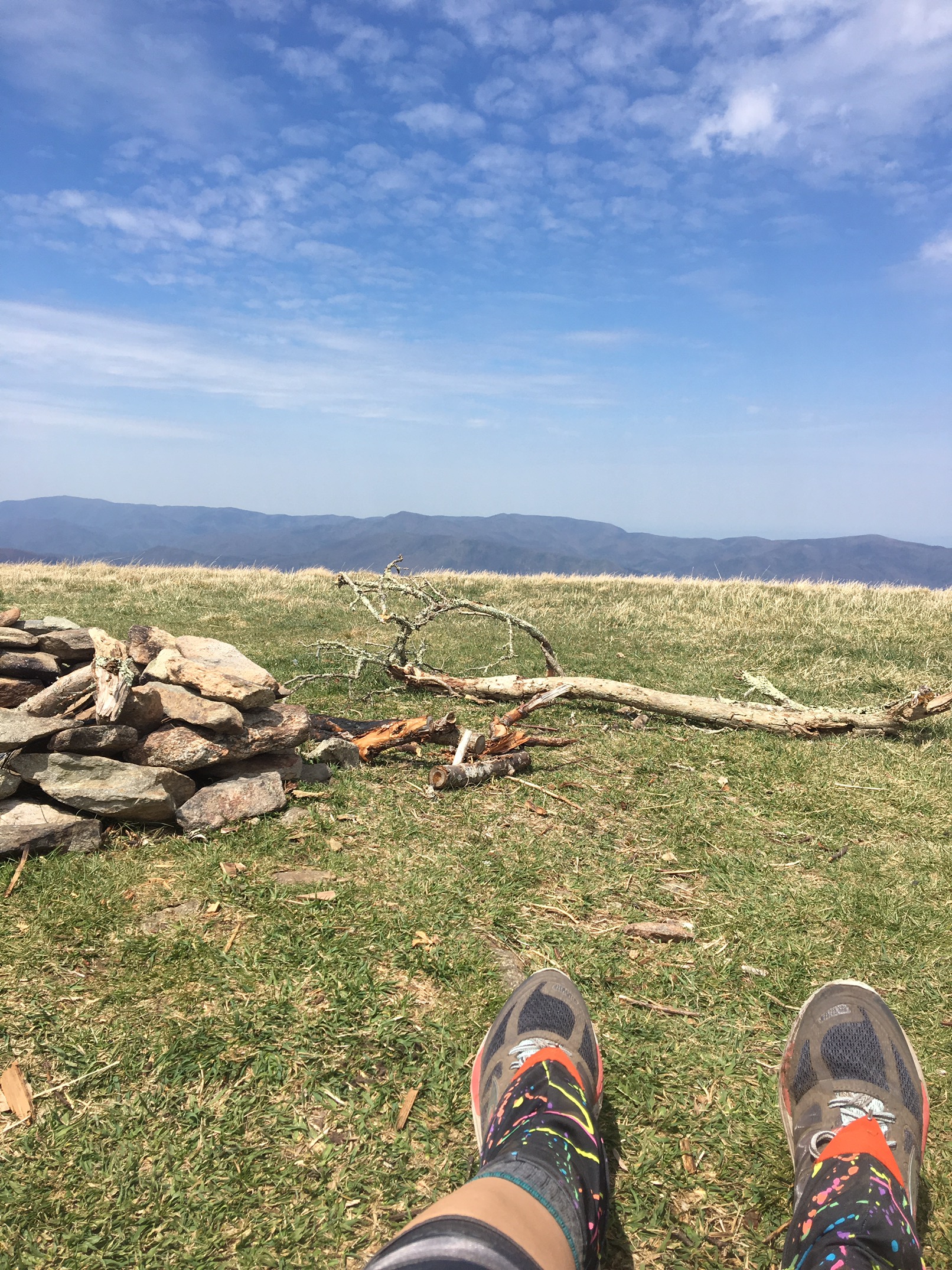 Wednesday saw my biggest mileage day of 20.6 miles in order to be in town in time for the AYCE pizza buffet in town. Let me tell you, it was glorious and both disgusting. 6 plates. 3 Dr. Pepper’s. 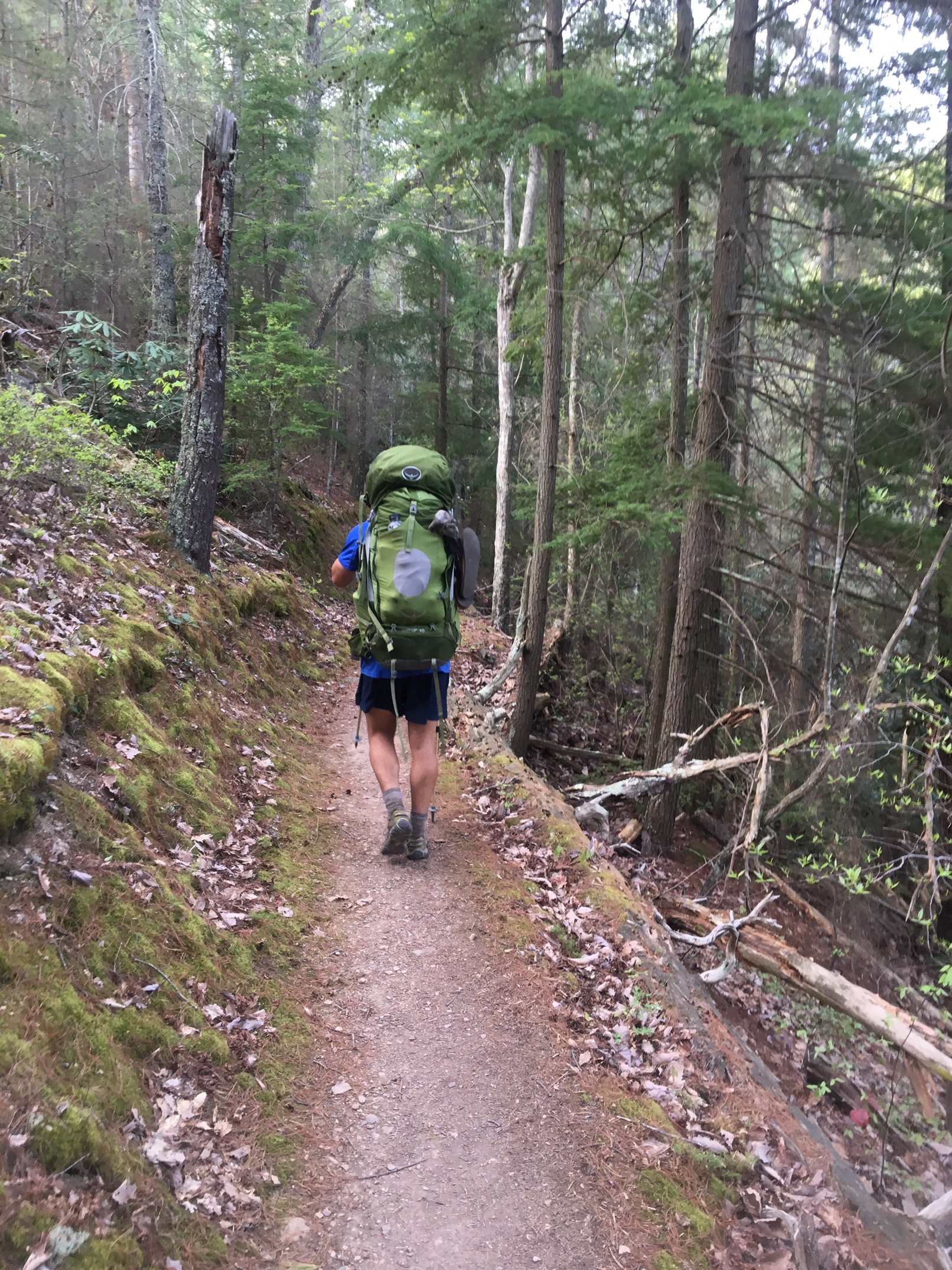 Rushing down the mountain in search of pizza #priorities

You’ve Got Questions, I’ve Got Answers

I asked my fans (aka Facebook friends) of questions they were wondering about the trail or my experiences (begcause one month in I’m totes an expert). I couldn’t answer all the questions, I got a lot, but here are some I thought were most relevant. Also keep in mind, this is one girl’s experiences. I am a little biased.

The poop question. Where do you poop? Do you have to dig a hole? What’s the bathroom experience like?

This seems to be “the” question. For an answer, most shelters have privys. So essentially you have a toilet approximately every 8 or so miles… Sometimes less, sometimes more. Not all do, for instance some shelters in the Smokies have poop trails, which is essentially what it sounds like. It’s a side of a hill that has tp all over the ground from where other hikers have done their business. The fear is either stepping in someone’s “doo” because they couldn’t be bothered with digging a cathole, or digging up a cathole by accident. 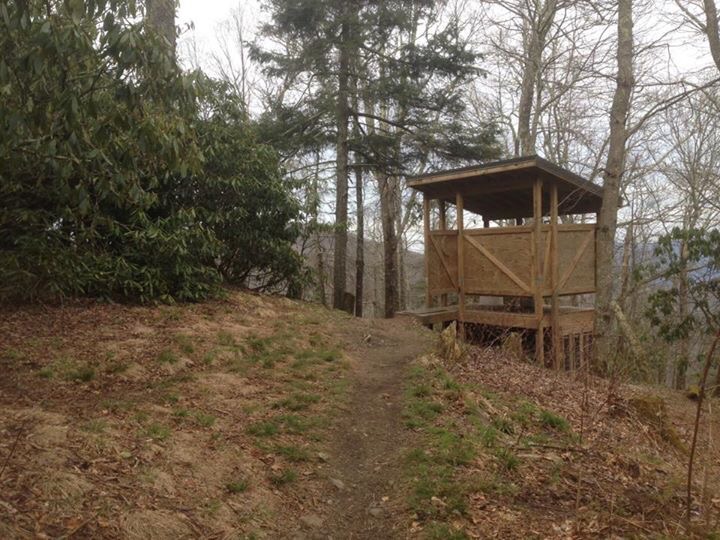 This is a luxury privy. Clean, spacious, AND with a door. 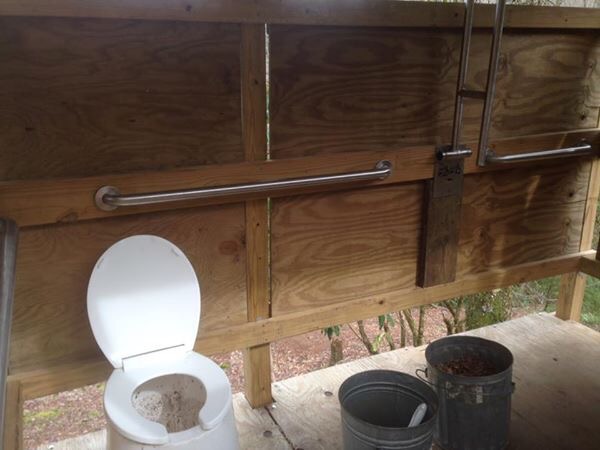 State parks (supposedly) are required to have handicap accesible bathrooms

If you don’t  privy it up, you go in the woods. They ask you go at least 80 steps from the trail, water source, and camping and dig a 6-8 inch hole. You find a nice log or rock and do your business. I carry a nice poop trowel. Some people claim to just use their trekking poles. I blame them for the tp on the trail. It’s hard enough digging a 6 inch hole with a trowel. I can only imagine the futility of trying to do that with a trekking pole. Seems irresponsible to me considering you can get poop trowels that are under 2 oz.

In the month I’ve been out here, I think I’ve pooped in the woods 3 times? Frankly finding a good poop spot is a hassle, so it’s easier to brown blaze it up. Also in the Smokies I was terrified to use the poop trails so I’d just hold it. As for peeing, I just squat behind a tree and do my business and wipe with a bandana I designated as a pee rag. It’s gross but gets the job done.

Where do you sleep? Is it scary sleeping in the woods/your tent alone? Have you ever actually been afraid?

I typically sleep in a tent. My Big Agnes FlyCreek UL1 is a small tent, weighing in under 2lbs. It’s great for me since I’m smaller, but I know big guys that sleep in one. 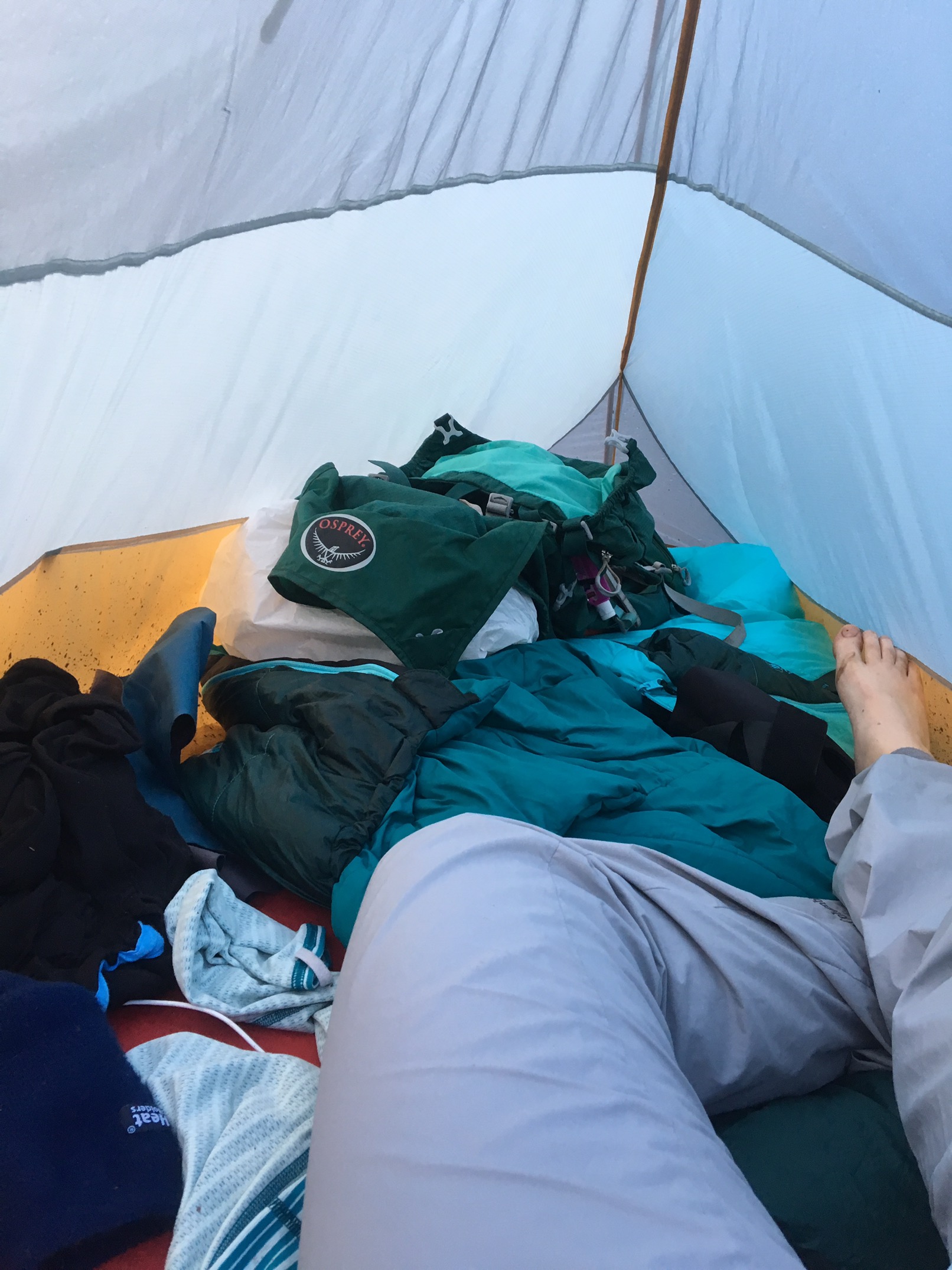 Me and all my stuff (ignore the dirty feet, hazards of the trail)

However like I said before, there are shelters approximately every 8 or so miles that are essentially 3-sided buildings. 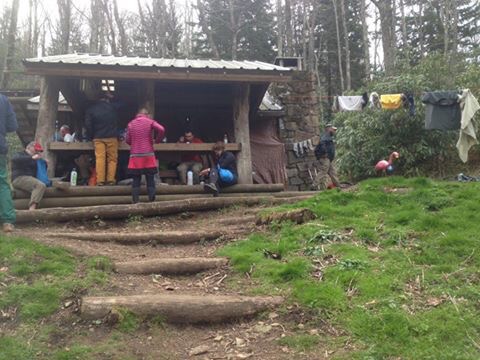 Shelter in the Smokies 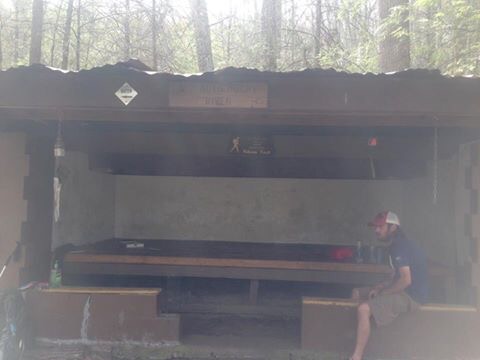 No Business Shelter right before Erwin

The shelters are great if you don’t want to put up your tent or it’s raining. However they’re mice-infested. So you win some, and you lose some. I have this irrational fear of a mouse running across my face so I tend to avoid staying in shelter. Typically there are so many people staying in, or camping near shelters, that it’s not like you’re alone at night. Really you’re never alone in the woods. While it may seem like it, sit 30 mins on the trail and at least someone will walk by.

However, have I been really scared? Not really. One night I kept hearing rustling in my pack. This was after a rain and my stamps were soaked and sweet smelling. I was convinced a mouse was in my pack eating my money because that’s where my stamps were. I spent all night worried about how I would explain that to the bank in Hot Springs. “Here’s my mouse-chewed $50.” However, I actually never checked outside. When I woke up the next morning my money was actually in my tent. I don’t know what the sound was. Maybe it was a mouse. Ignorance is bliss.

How do you eat?

I pick up food in town and then have a JetBoil which is essentially a stove that boils water really fast. Food that requires only hot water or no cooking is essentially my diet.
If you were stranded on an island and only had one trail meal to bring with you, what would it be?

Annie’s Shells and Cheese is my jam. I’m convinced it’s more filling than regular mac & cheese. That and a side of dried peaches and maybe a cold Coke or G2 or maybe both. I realize I’m being a little unrealistic with the cold part but when will I be on a stranded island?

Is it possible to hike the AT with a dog?

Yes, but it seems to be a lot of work and require a lot of planning. It’s hard enough hiking and taking care of yourself, let alone another being. Initially there were a lot of dogs on the trail. Now that I’m 300 miles in, that number has decreased significantly. I think part of this has to do with hikers poorly planning and their dog’s not being able to handle the trail. Talk to your vet beforehand. It seems really unfair to the dogs who’s owners didn’t do the research. Also some dogs (especially poorly behaved dogs) aren’t meant for the trail.

How much did you bag weigh initially? How much does it weigh now?

I’m a fan of the ignorance is bliss philosophy. I know base weight my pack weighed around 18lbs but haven’t actually weighed it. I haven’t cut anything except a fleece and I’ve added a pair of socks and a tank. If I were to do my gear over again, I’d get a lighter weight sleeping pad and a different bag. I may switch out at some point. I may not.

Are you sick of wearing the same outfit day after day?

YES! Initially packing I bought clothes based on utility and cost, not actually whether I liked wearing them. I’ve done some serious online shopping and am switching some clothes out in Damascus. Yes, my convertible hiking pants are utilitarian. No, they aren’t flattering. A month later I almost hate them. 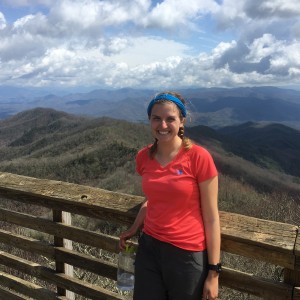 What’s the male to female ratio?

3:1? There are more women than I was expecting. Also in general hikers are older than expected (excluding retirees). I’m on the young end of hikers.

If you had one thing to tell other young girls, what would it be?

If there’s something you want to do, go do it. Don’t let others get in the way. When preparing for my hike, one of the things I hated the most is people saying, “I would never let my do that.” The world can be a dangerous place wherever you are. Walmart at night is more dangerous than the trail. However, this can apply to anything. Do what you want to do. Don’t let others tell you what you can, especially because you’re a girl. Things have a way of working out.

Also if you’re a person who finds yourself making limiting statements about the young women around you. Stop! It’s hard enough figuring out who you are and what you want to do without, people telling you what you can’t.

What has been the hardest part of the trail so far?

Nothing has been overwhelmingly hard, like sit down and cry hard. When something is hard, it’s usually counteracted by something pleasant. I tend to have a short memory. One day I wanted to lay in the trail and die. My back hurt, my feet hurt, my legs hurt. Shortly after I was rewarded with an icy cold Coke and Cheetos. Up’s and downs of trail life. However, two things that I have found particularly rough:

What do you miss the most?

Real dinner, like spaghetti or whatever. You eat trail food and you eat restaraunt food. Nothing in between. That and clean hands.

How much did you save for this trip? How much have you spent?

Truthfully, I didn’t do a whole lot of specific saving for this trip. I’m a saver and have enough funds to typically get through. Also I’m super fortunate in that my parents have been very supportive of the hike. They’re financial help is great.

As for the amount I’ve spent, I’m not sure. I try to be somewhat thrifty but the hiker hunger calls. I spent about $1300 in gear prior to the trail.

Are you working on your thesis?

Ha! What thesis? Oh yeah… That one. Technically I’m still waiting for revisions from my advisor, but I probably wouldn’t be doing anything with it even if I had it back.