Week 6: On the Road to Damascus, Views and Trail Magic for Days

If the week leading to Erwin, TN was uneventful, the week following has been anything but. The trail has been flush with trail magic, great company, and beautiful scenery, plus I said farewell to the two states I’ve been bouncing back and forth between since the Smokies. When I said farewell to ole Virginny last January, I wasn’t expecting to return so quite so soon. However, it’s a good thing I have approximately 550 miles to get reacquainted. 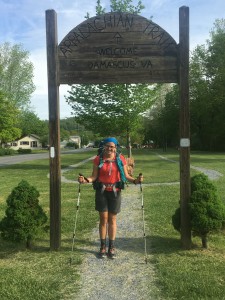 Today finds me in Damascus, VA after a short 10 mile hike into town yesterday. Lounging is definitely in the cards… Well it’s what I’m doing right now after enjoying a cinnamon roll  and some coffee from Mojo’s… After I had 3 bowls of Lucky Charms and blueberry waffles at Woodchuck’s Hostel. 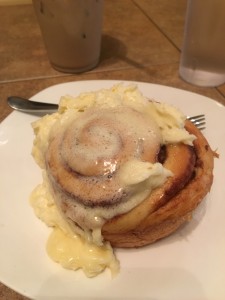 I ate this for you Pops since you’re so far away in MO. I’m such a nice daughter.

Shoutout to Caden who drew this beautiful picture of me hiking! 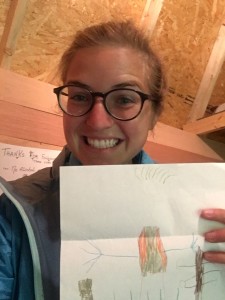 Also the mother who mailed me a whole new wardrobe (aka one outfit) and a box of goodies.

As I may have mentioned, I have had a great hike from Erwin to Damascus. There have been ups and downs (as usual). However the weather has been great, there’s been continuous generosity of others through trail magic, I’ve had great company, and the views from the trail have been stunning.

Roan Mountain (things have a way of working out) 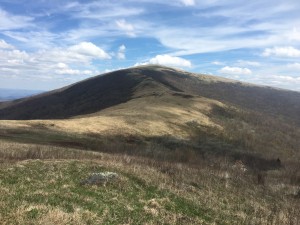 Final bald of Roan Mountain. There’s a person hiking in this photo… Puts the size into perspective.

Day 2 out of Erwin (I think) found me hiking right into a trail magic spread of pulled pork, cupcakes, chips, Coke (mah fave) hosted by Kansas, a 2015 thru hiker. Charged up on Cokes I attempted to hike Roan Mountain to the Roan Knob Shelter, the highest on the AT. Halfway up I caught up with an older hiker, Blue (and by older I mean my father’s age) and we continued onward, so far onward that the shelter never materialized. Convinced that we had missed the turn and that the continued white blazes were from an older version of the trail (you often see where the trail “used” to go, it’s often unpleasant straight up hills that make you thankful for switchbacks) we continued onward. Fortunately, a day hiker set us straight. “Yes, you’re still on the AT.” “No, you’re not that stupid. The sign is easy to miss.” Later I found out, Moonshine, another hiker had walked a mile past the shelter and had turned around to it.

However things have a way of turning out. Making it a 19.6 day instead of a 17, we exited Roan Mountain and camped on the first bald, Round Bald. 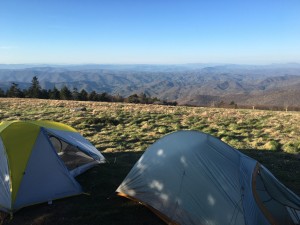 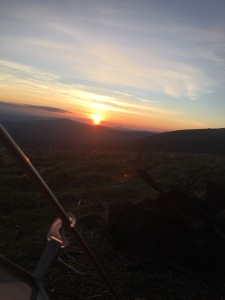 Sunrise from Round Bald

Insert cool photos from the Balds. If you’re looking for a really neat day/section hike, I highly suggest Roan Mountain. 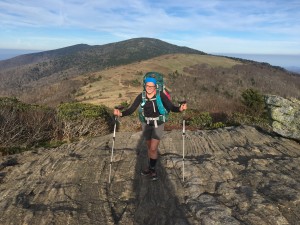 The tree-d mountain is Roan. The bald behind me (no trees) is Round Bald where I camped. 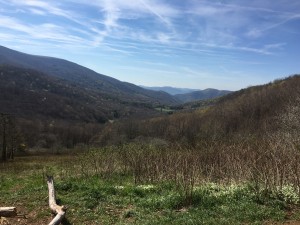 View from Overmountain Shelter (I did not sleep here) 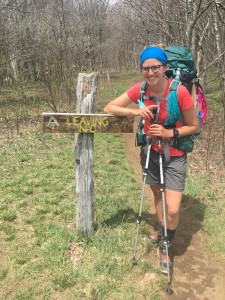 Oh and I said goodbye to North Carolina (but that’s no biggie right??)

That night I took a pause at the Mountain Harbour B&B to shower, but mostly what I had heard would be the best breakfast I would have on the AT. I was not disappointed. 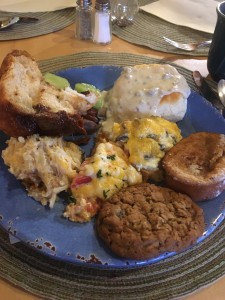 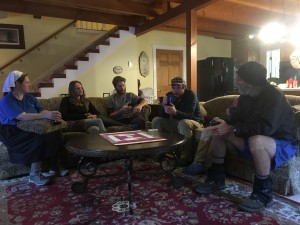 Because I lack self-control and potentially foresight, I gorged myself on the best breakfast. It tasted so good going down. Several hours later, I deeply regretted that decision. A great thing (absolutely ironic) about Tennessee is that they don’t believe in privys. For the greater part of the day I felt bloated and gassy, requiring several pit stops into the woods with my trowel. Sick to my stomach I didn’t want to eat anything, so I was fatigued. A relatively flat day, every hill was excruciating. To top it off, my feet hurt. I had chalked the day off to being a “bad day” thinking the next day would just be better.

Walking 18 miles on a day that you’ve declared to be terrible, is the worst. Trudging down the trail, I assessed why the day was so bad. Well, I was tired; I hadn’t eaten anything. My feet hurt; I hadn’t rested. So I decided that the next stream I came to, I’d take 20 min eat a snack, soak my feet and reset my mood. Sure I couldn’t control feeling bloated, but everything else could be changed. 20 min later with dry socks and snacks I was a changed woman. Sometimes you just need those mental resets, what can you do to make an unpleasant situation better.

Walking down the trail you often see great camping spots near streams or on Balds or with great views. However, in the pursuit of miles you pass them right on by. You can’t stop at 8 miles, even if the spot is perfect, because you need to fill your mile quota.

I was convinced I needed a McFlurry and in my excitement convinced several other hikers they needed to join me. According to my AWOL guide Hampton, TN was just a short 1 mile hike in and Mickey D’s was close. Not true. However, the hike to Hampton followed Laurel Fork. 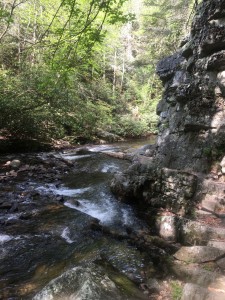 After the hike into Hampton, the plan was to continue 3 more miles to the top of this mountain for the night. However, we (ETA, another hiker and me) decided to take advantage of the scenery. We soaked our feet, drank some beer, ate Subway. Later we were joined by other hikers. It was a perfect day. Sure I could have hiked 3 more miles, but I would have missed the moment. 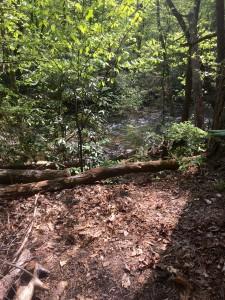 Later that night it stormed and I found myself camped in a puddle that resembled a lake. On a positive I learned my tent is pretty dry. In the morning the weather had passed.

I’ve been on a trail magic role. I say, “Man, I could use a Coke” and within a mile a cooler with one Coke appears. Or “If I sit here sad enough at this gap, maybe there will be trail magic” and sure enough it happens. (I realize I’m jinxing myself by writing this). 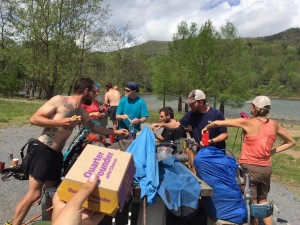 Bumming at Watauga Lake, a lady arrived and magicked us $50 worth of McDonalds. Hikers LOVE Mickey D’s! 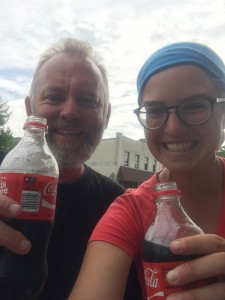 Greg “Hammer” love Coke almost as much as I do 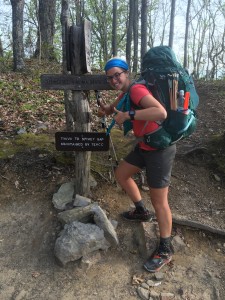 Sure hope Virginia is a cool state because I’m here for a while – Peace!