Started out of camp around 7 a.m. and made it to the top of a nearby rocky summit for a spectacular sunrise. A couple of miles down the trail was a sunny patch of grass, perfect for my morning coffee and breakfast.

Amazing views overlooking Nolichucky River as we were coming down the mountain into Erwin, Tenn.

Uncle Johnny’s is dirty, funky, and nothing seems to work but somehow it’s cool to be here. Ordered a pizza from Rocky’s, which they delivered and I promptly ate. 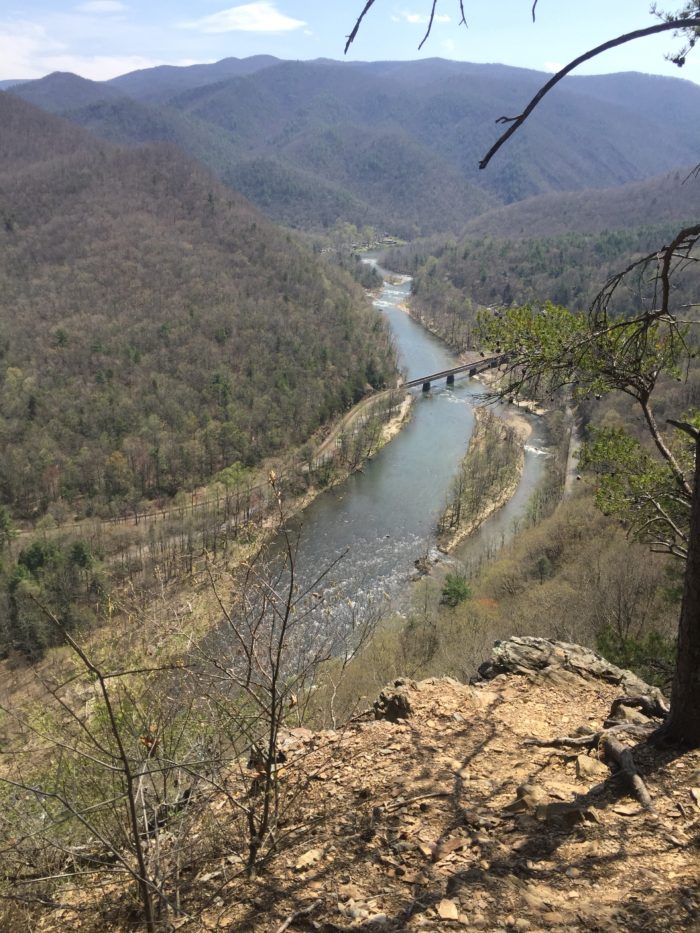 It is Sunday and it’s been raining most of the day here, but warm temperatures. Tomorrow’s forecast is for freezing temperatures and snow. I’ll be headed over Unaka Mountain (5,000-plus feet) to Cherry Gap Shelter or beyond.

I just have to make it through one really cold night, then the weather improves throughout the week. The goal is to hike 84 miles in about five days to Hampton, Tenn., where I have a reservation at Boots Off Hostel next Saturday and Sunday. Also, a new pair of shoes should be there waiting for me.

The weather has hikers pouring into Erwin right now. I’ve seen several folks here who I haven’t seen since the Smoky Mountains or Hot Springs. Some of them are still behind me 30 miles or so but coming in from Sams Gap or elsewhere. Rampage, Minnesota, Sherwin, and others.

My feet are feeling much better after a day off. I probably need to plan at least one rest day per week from now on. 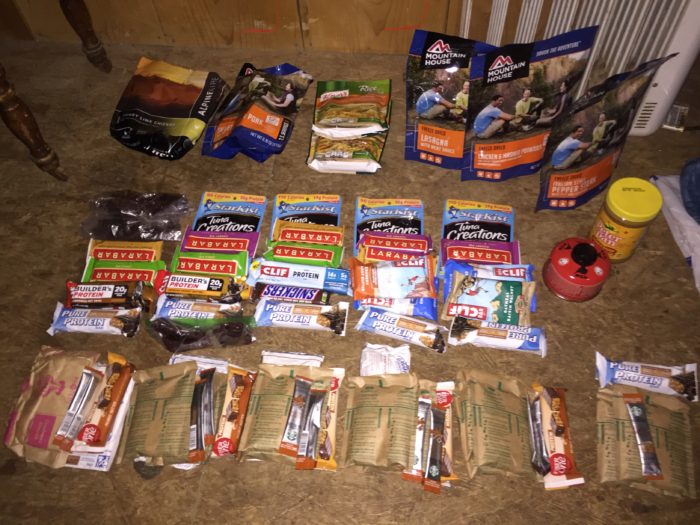 The heavy rain Sunday had created flood conditions along the river in Erwin, Tenn. The trail was also flooded for the first several miles out of town. The forecast was for possible snow but no accumulation and freezing temperatures. As I climbed higher the snow began falling, sometimes mixed with sleet.

Several hours into the hike the snow was accumulating and the temperature was dropping. Crossing the summit of Unaka Mountain the winds were picking up and the trail was covered in snow and difficult to find at times.

Passing through a unique spruce forest near the summit, fresh snow revealed recent tracks of deer, various little critters, and a bear track. I moved along quickly.

Tired and cold, I arrived at Cherry Gap Shelter to find it was full. With frozen fingers I set up my tent as fast as possible. The winds were howling with gusts over 40 mph and the temperature was dangerously cold. No time for dinner, just put on every piece of clothing I had and jumped under the quilt. Eventually I stopped shivering but the wind was blowing snow and sleet into my tent.

Sleeping was not good as I tried to keep things from freezing and getting wet. Tough night on the trail. 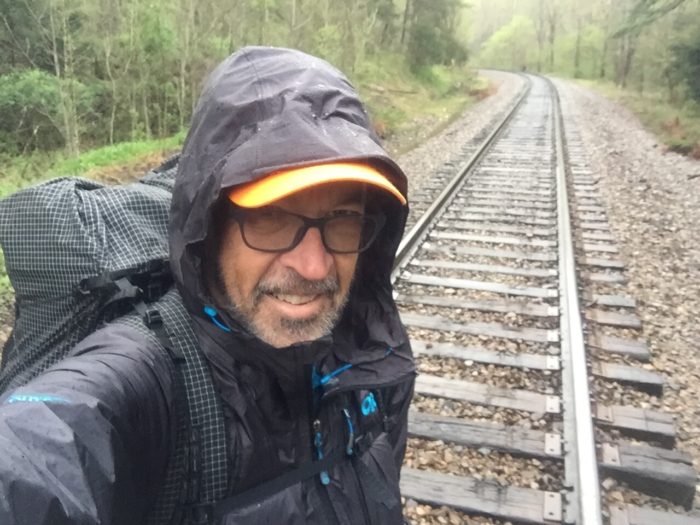 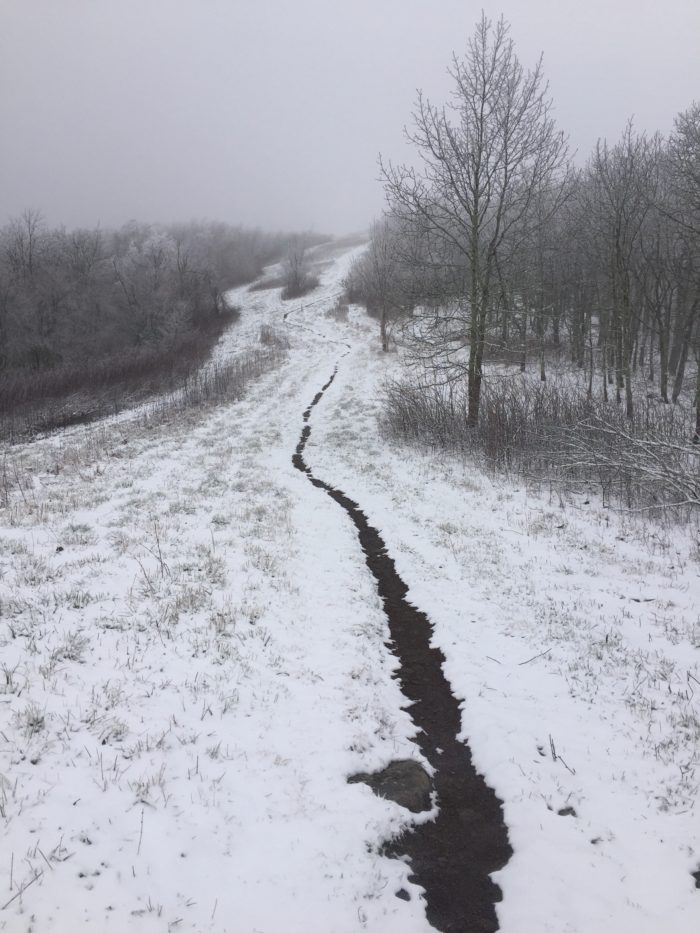 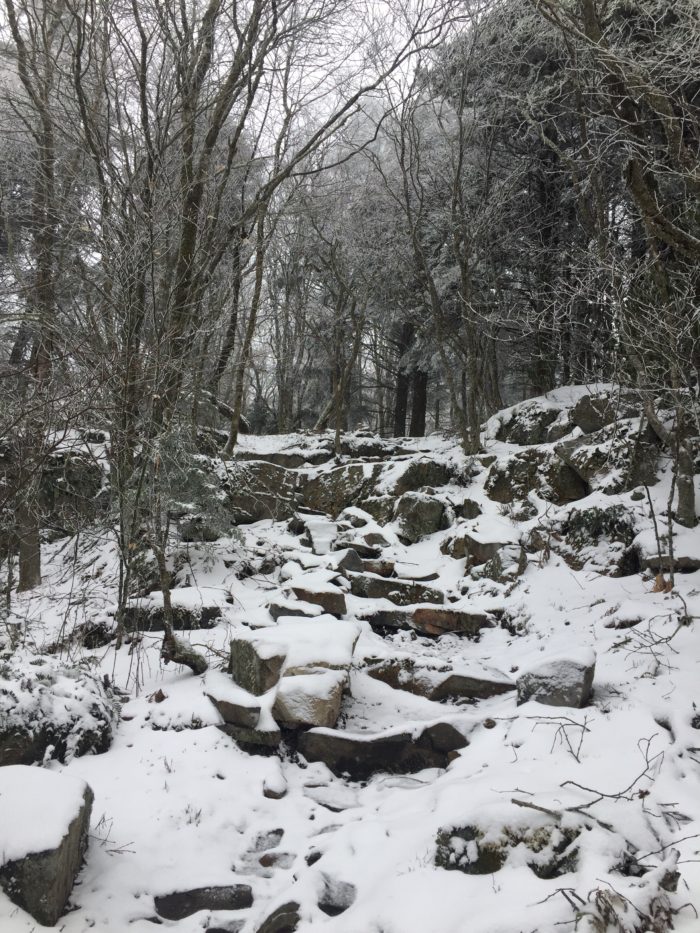 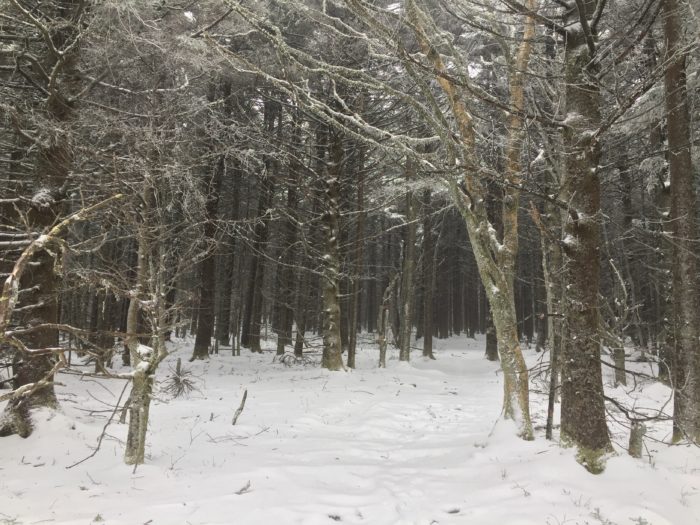 Tuesday, April 17. Woke to ice in my tent, below-freezing temperatures, and several inches of snow with drifts up to a foot or more. Cleared out as much snow and ice from my tent as possible then packed up everything and tried to get moving. My shoes were frozen solid; even the laces were hard as a rock. After about ten minutes of struggling I finally got them on and laced up.

I knew that I had to get moving to keep from freezing. With my frozen trail runners on I hit the trail. Fortunately another hiker had left before me so I didn’t have to search for the trail in the virgin snow, I tried to put my feet in his footprints, especially in the 12-inch high snowdrifts.

After a couple of hours I came upon a spot where the sun was shining so I tossed my wet puffy jacket and quilt on some branches while I made coffee and breakfast. They dried out somewhat and I felt renewed after eating.

Hiking in the snow and ice is much slower than normal conditions. There were many slips and near falls, and one real doozy on some icy rocks, making a total of three falls so far on this journey.

I got to Hughes Gap and decided to call it a day. Set up camp back away from the road, made some dinner, and crawled into the sack. Hopefully get some sleep tonight. 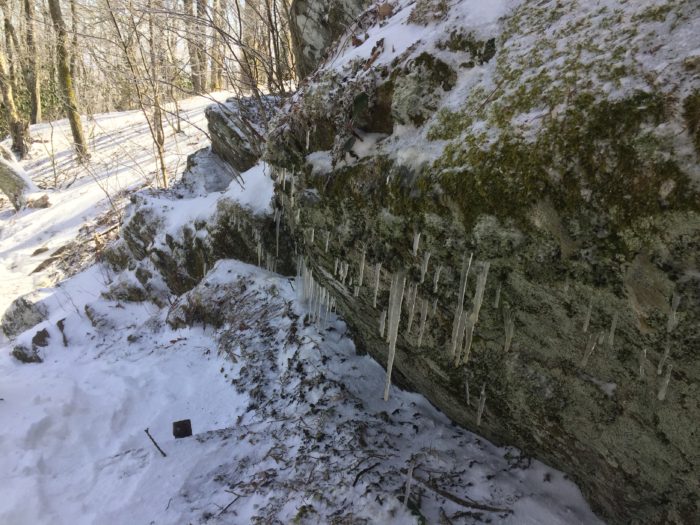 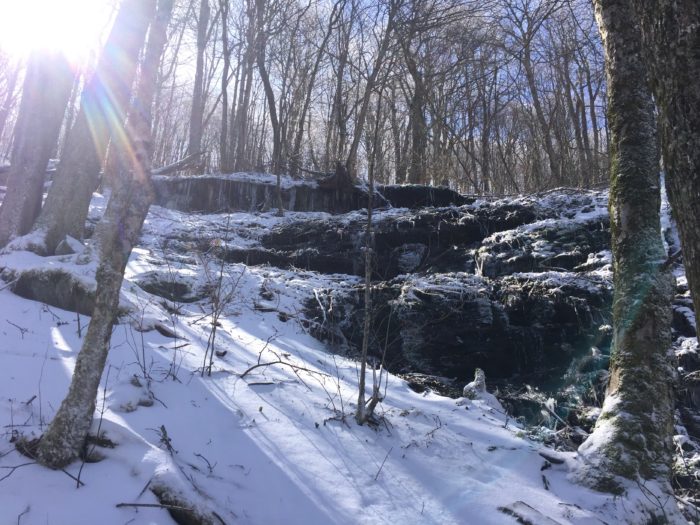 Great night’s sleep at Hughes Gap last night. I was camping solo just out of sight of a quiet rural road. The winds were blowing through the gap but my tent pitching skills are improving so no problem staying toasty and comfy.

The hiking started with a long climb and it wasn’t too long before I found myself back up among the icy cold and snow. Feeling strong, I powered over Roan High Knob and past the highest shelter on the AT. Coming down the other side was a bit tricky with all the melting snow, slush, and mud.

Crossing over Round Bald, Jane Bald, and Grassy Ridge Bald was amazing with the clear blue skies and scenic views. The snow was gone and the temperature was rising. It felt like I had walked from winter into spring, and I liked it.

Had to go visit the Overmountain Shelter, an old converted barn, and sign “Champ was here” in the logbook. Loved the feeling that I was walking the same place as the Overmountain Men had walked in 1870.

Pushed over Little Hump Mountain and set up camp in Bradley Gap. Sunshine galore, tent wide open in the warm breeze, I have the place to myself as far as the eye can see in all directions. This will be perfect if the weather holds out. 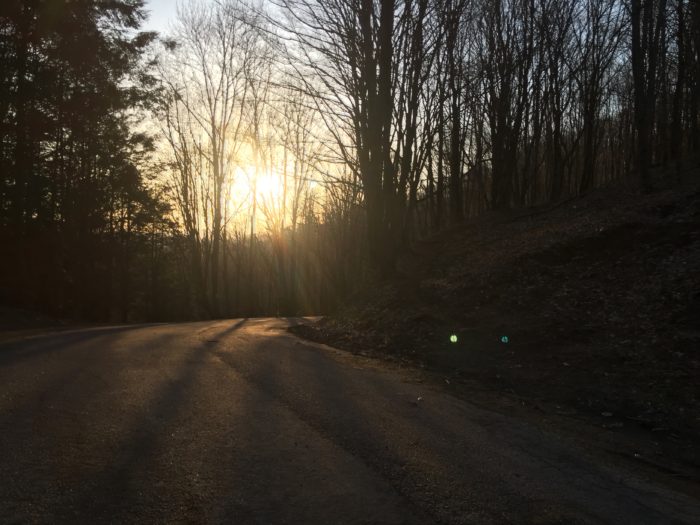 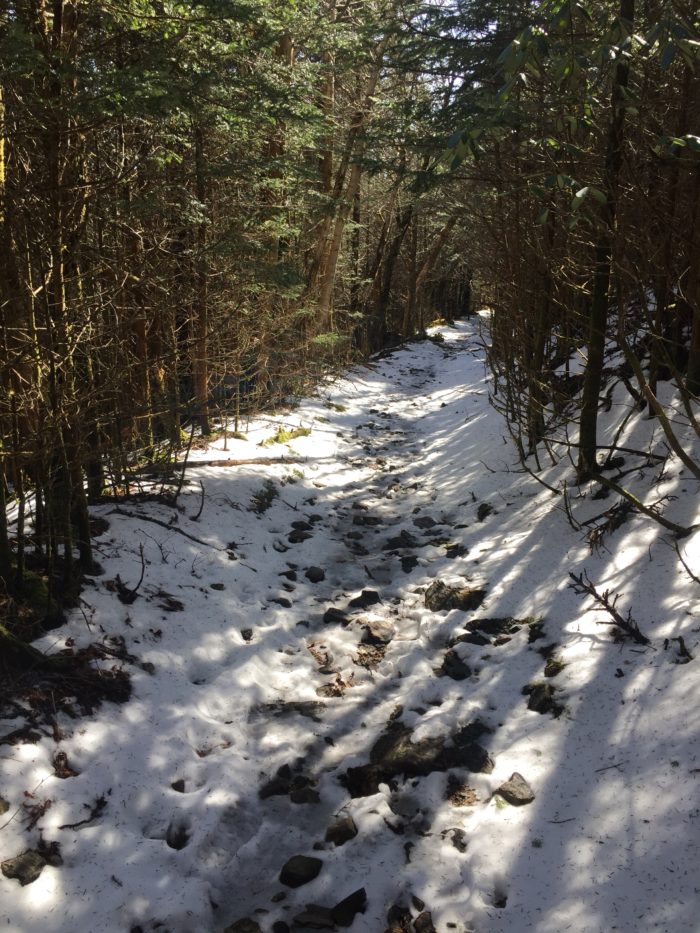 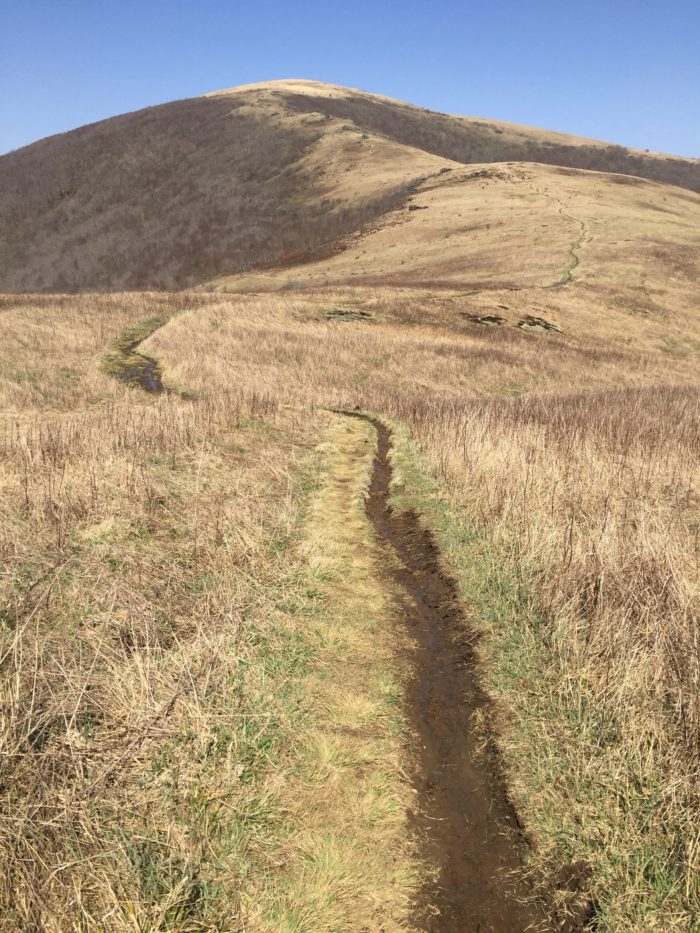 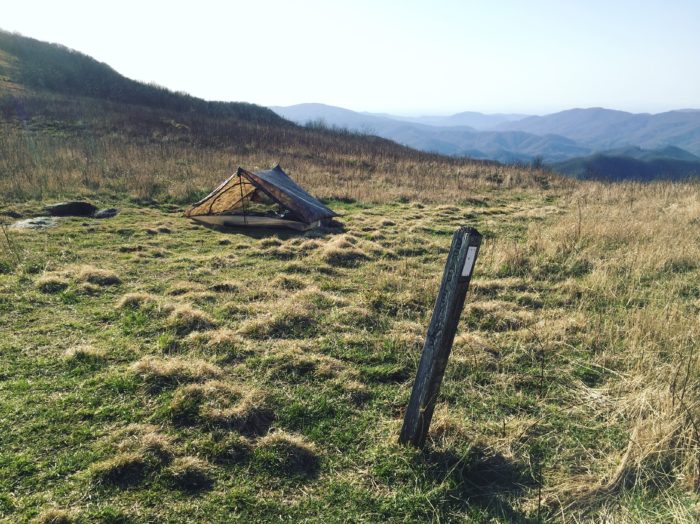 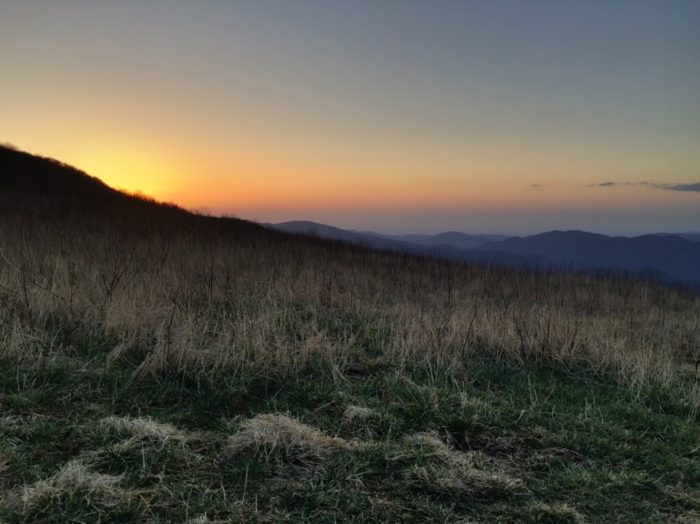 I knew it was a big gamble setting up camp in the wide open space of Bradley Gap and I had been winning, that is until about 3 a.m. Those balds at high altitude have their own unique and unpredictable weather systems. Suddenly, the winds kicked up and tent stakes popped out of the ground. Shortly after that was some rain and increasing winds, way too much wind. I quickly packed up everything in the dark and decided to put on the headlamp and start walking. It was approaching 4 a.m. and pitch black as I started up and over Hump Mountain in the dense fog, cold rain, and howling wind. Visibility was about eight to ten inches and all I could see was the trench-like path under my feet so I took eight- to ten-inch steps. The wind nearly knocked me down several times but steadied myself with the trekking poles. I finally made it to the top of this bald mountain, nearly blinded by the conditions, when the trail disappeared. I circled around for several minutes trying to get a bearing, trying to relax and not panic. Eventually I spotted the geological survey marker in the ground and realized this must be the summit. The trail always gets obscured at the summit from people walking around taking in the views. After several desperate moments I found the trench-like trail again and continued methodically taking small steps, trying to stay on the path while not getting knocked down by the wind and rain. It was the longest hour and a half of my life but I finally made it to the tree line and out of the wind. Now, with slightly more visibility, the trail turned to slippery wet rocks and a steep downhill. Again, slow and steady was the key to negotiating this terrain. I passed a sign indicating that I was leaving North Carolina for good.

Thankfully, the sun began to brighten the sky around 6:30 a.m. and I made it to a road by around 8 a.m. Hitchhiked to a nearby hostel in Roan, Tenn., called the Station at 19E. The owner, David, was the only one up at this time, but he welcomed me inside and gave me hot coffee and listened in amazement to my story. Later he took me to breakfast at the local bakery where the owners are musicians. I had a wonderful breakfast and ended up in their home studio jamming and having a ball.

Back at the “Brewstel,” Audrey’s term for part hostel and part pub, I studied the trail guidebook and checked the forecast freeze warnings. More foreboding weather was being predicted. So I packed up and David drove me back to the trail. I continued from where I left off and hiked another 8.5 miles, past the 400-mile marker, to the Mountaineer Shelter. It’s a large shelter but I knew that there were many hikers behind me heading to the same place, so I pitched my tent in a secluded campsite .2 miles south of the shelter. As I lie here writing this, hikers are coming down here looking for a place to camp because the shelter and surrounding campsite is already packed.

I’ve got all my cold-weather gear on, hunkered down and hopefully ready for the freezing temperatures.

I have a private room reserved for Saturday and Sunday nights at the Boots Off Hostel in Hampton, Tenn. So if I can make it through tonight and tomorrow night and hike 25 more miles, I’ll get to sleep in a bed again. 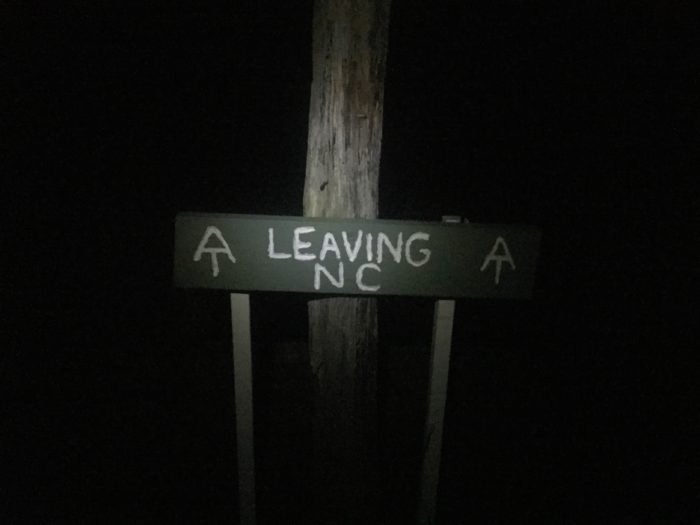 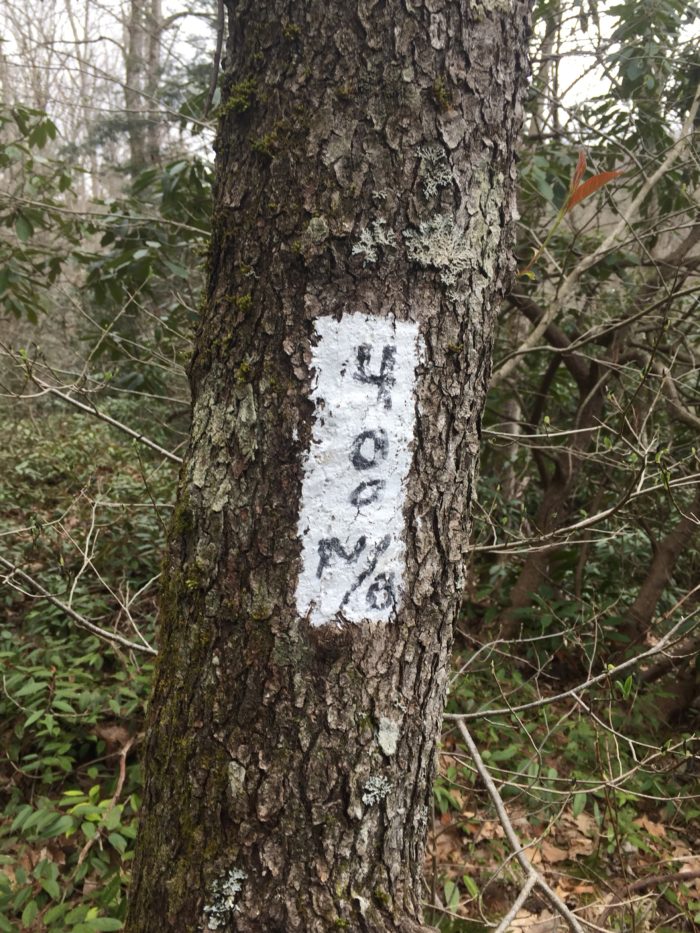 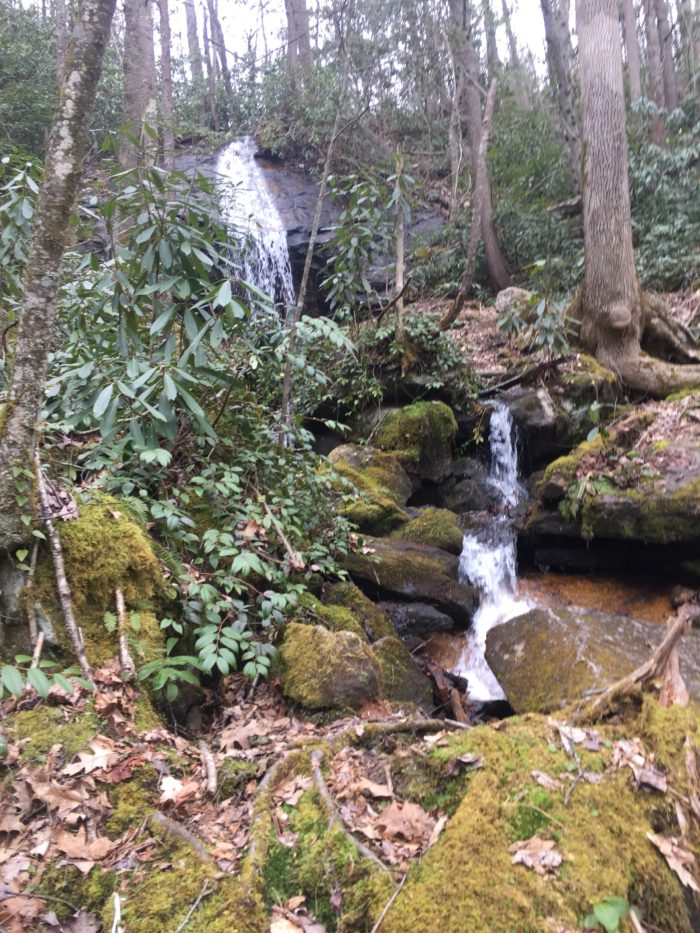 I was bundled up all cozy and warm, and got lots of good sleep last night. I woke to the sound of the nearby waterfalls and the air was cold but not freezing. Feeling energized and excited for the day’s hike, I packed everything and quickly hit the trail.

Eventually the jacket and gloves came off, I rolled up my sleeves, and began looking for a place to stop and make coffee and breakfast. Seemingly out of nowhere there is a park bench on the trail, in the sunshine, overlooking a scenic view. Perfection! Best breakfast ever.

As I was leaving my perfect breakfast spot an older hiker arrived. It was Farmall, a 60-something guy from New England. We hiked together for hours and he was so interesting. He collects vintage tractors and farm equipment, farms, gardens, drives trucks, knows a lot of history, makes maple syrup, and leads hiking groups in his region. Hope I run into him again.

Leapfrogged all day with some younger groups on the trail. Turns out we passed mile marker 420 on day 4/20. There was some celebrating going on round here.

Lots of picturesque scenery today and the Laurel Falls area was just amazing. I had to resist the urge to take a photo every two steps. Still, I took quite a few photos and videos. Check out dancoy on Instagram and Champ Hikes on YouTube for lots more of my images.

I didn’t dig the scene up at the Laurel Forks Shelter; too rocky and cool if you’re a cliff dweller. So I found a campsite by a quiet river a short ways north of the shelter.

Tomorrow I’ll nero into Boots Off Hostel, pick up my new shoes and take a zero there on Sunday. 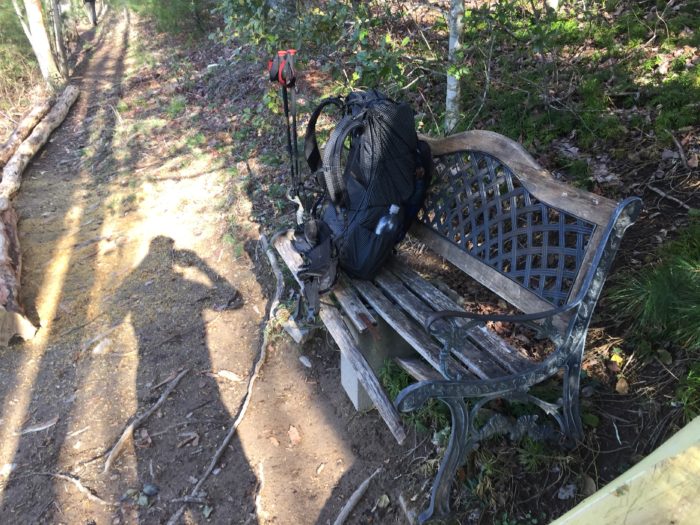 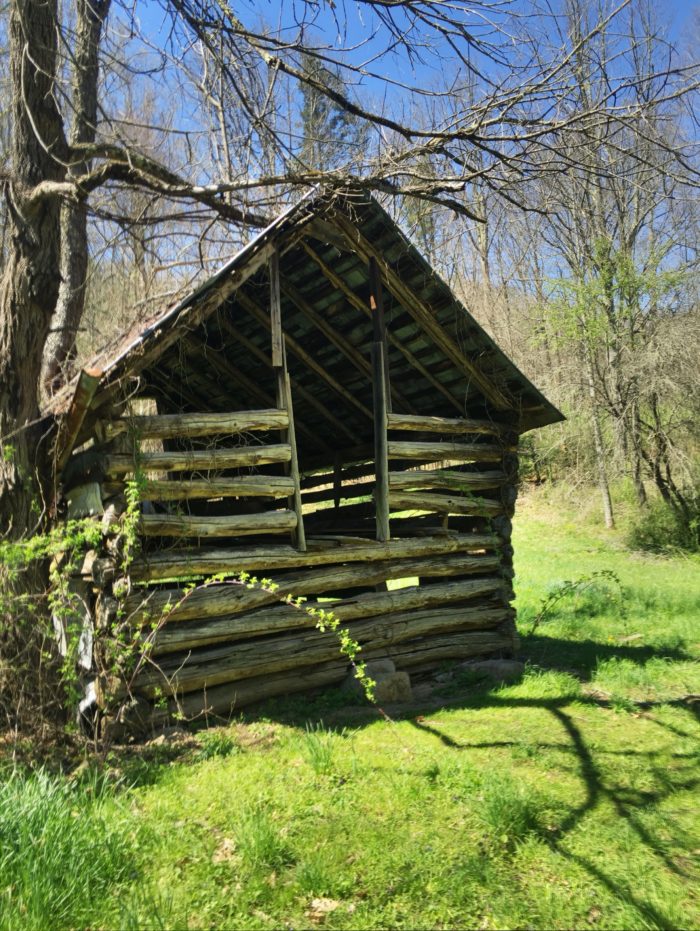 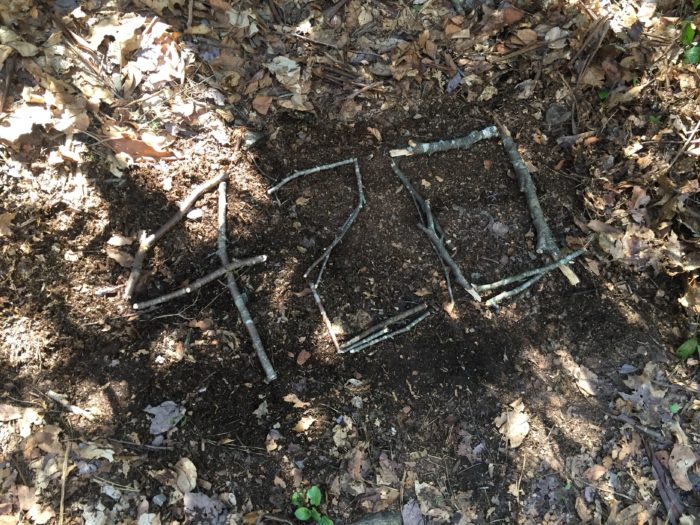 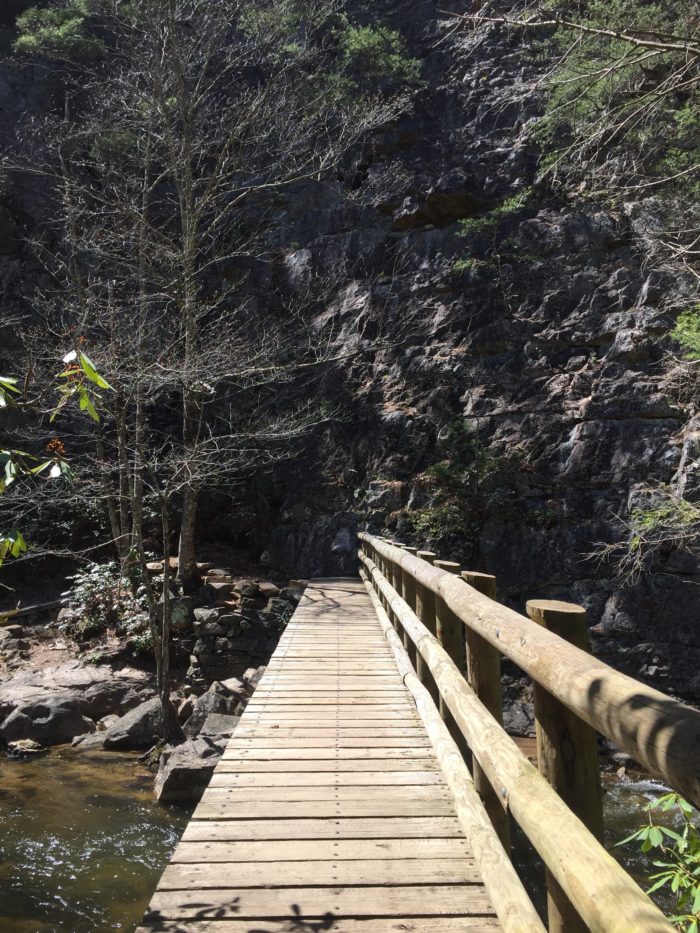 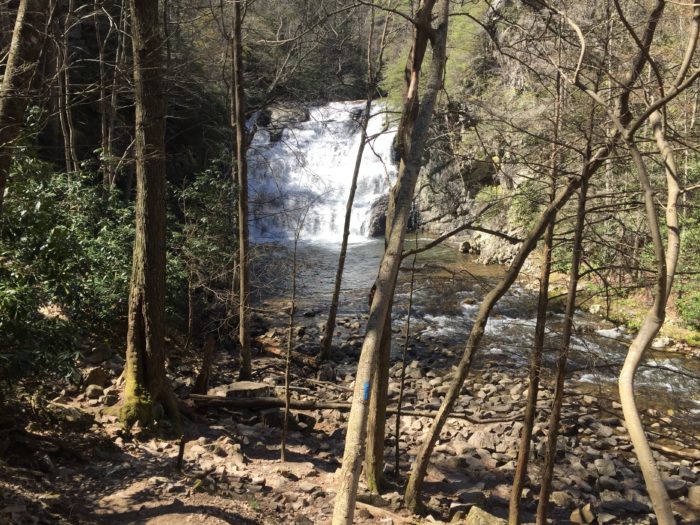