Week Three: Leaving my madness (and Georgia) behind

North Carolina welcomed me through the AT with a series of kicks in the teeth.

Climbing approximately a thousand feet through both the border and Bly Gap, I found myself wishing by far for the gentler climbs of previous days, but by focusing step by step, I continued on. 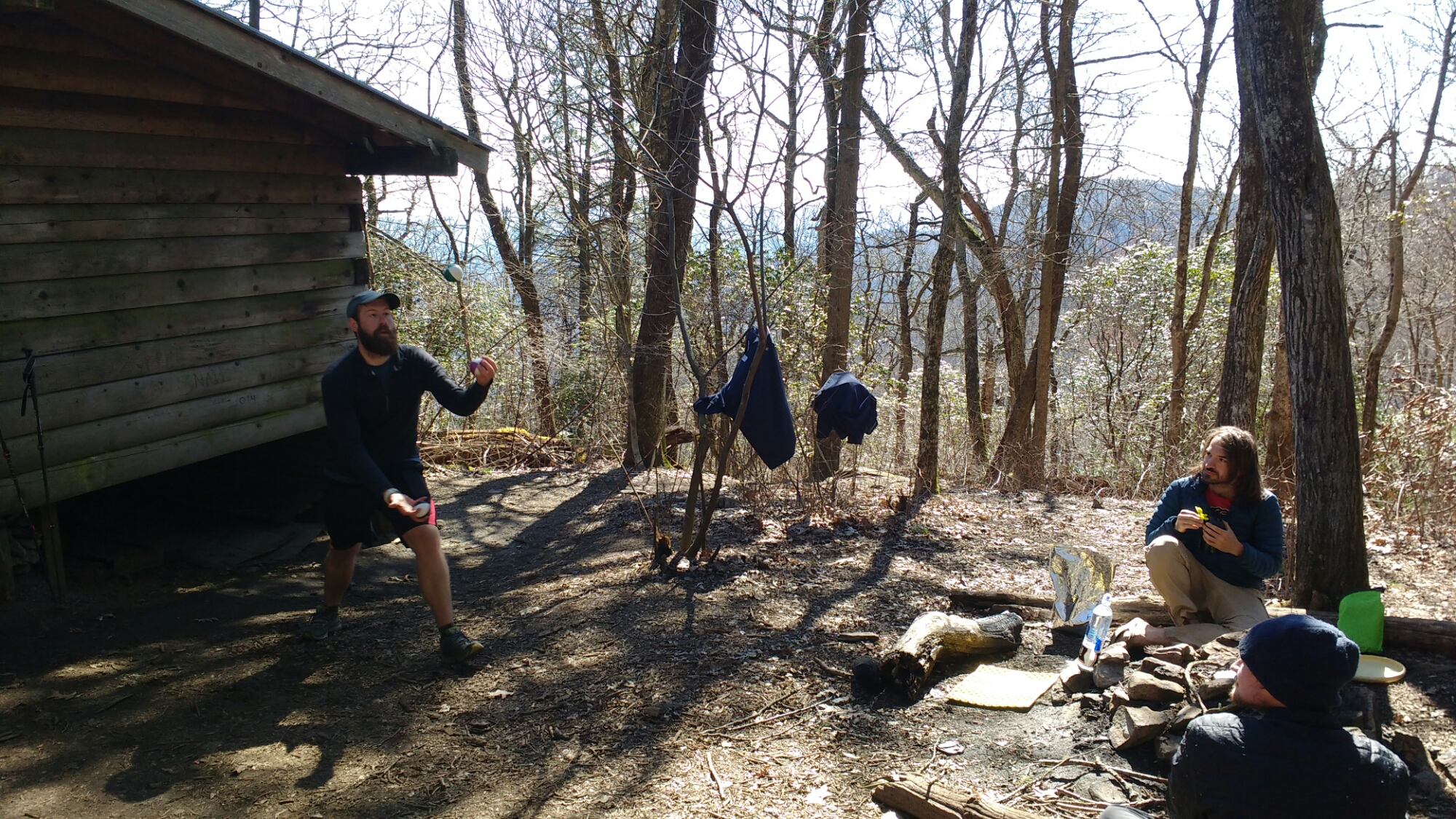 1130 receiving juggling lessons from Scavenger around the firepit

I’ve perfected a move I call “The Friar Tuck Lean” (more on the name in a moment) wherein I lean forward with my trekking poles at an angle, allowing weight to be relieved from both my legs and my back, and I catch my breath. I do this every five to ten paces, more if I’m on an uphill or running out of energy. It’s been a good way of letting myself rest as often as I need to without ever actually stopping 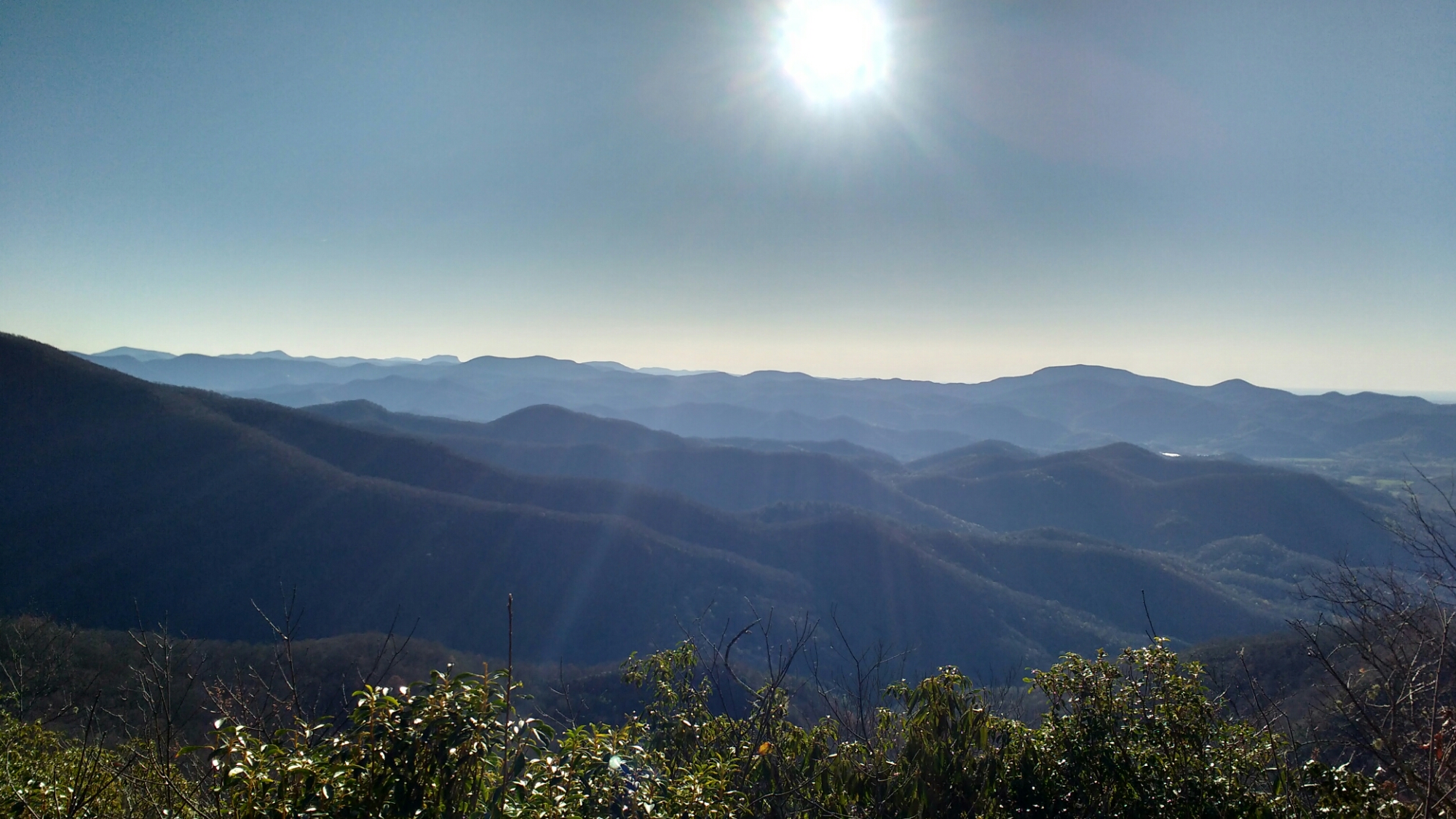 I spent some time hiking through rhododendron bushes, not even realizing how high I was, when suddenly the Trail opened up and my gob was smacked by this view

A few days after getting into North Carolina, I ran into a thunderstorm. I was in my tent for the night, and I can absolutely say it was one of the lowest points in my journey thus far. My tent is an MSR Fast Stash, and while practice has led to me having a more stable setup, it’s still no where near an ideal tent for these kinds of conditions. The tent is held up by my trekking poles and with the extreme winds that were regularly changing directions, the poles simply couldn’t stay up. And even when the tent was staying erect, there are large mesh windows on each side, and another along the top front which are designed to allow airflow. Now in gentler conditions, maybe even some light rain, these are fine. The rain is kept out by flaps that are at an angle to the windows. However, with the stronger winds blowing through, these became gateways for rain. By the end of the night, I and everything I owned was soaking wet and covered in mud. o 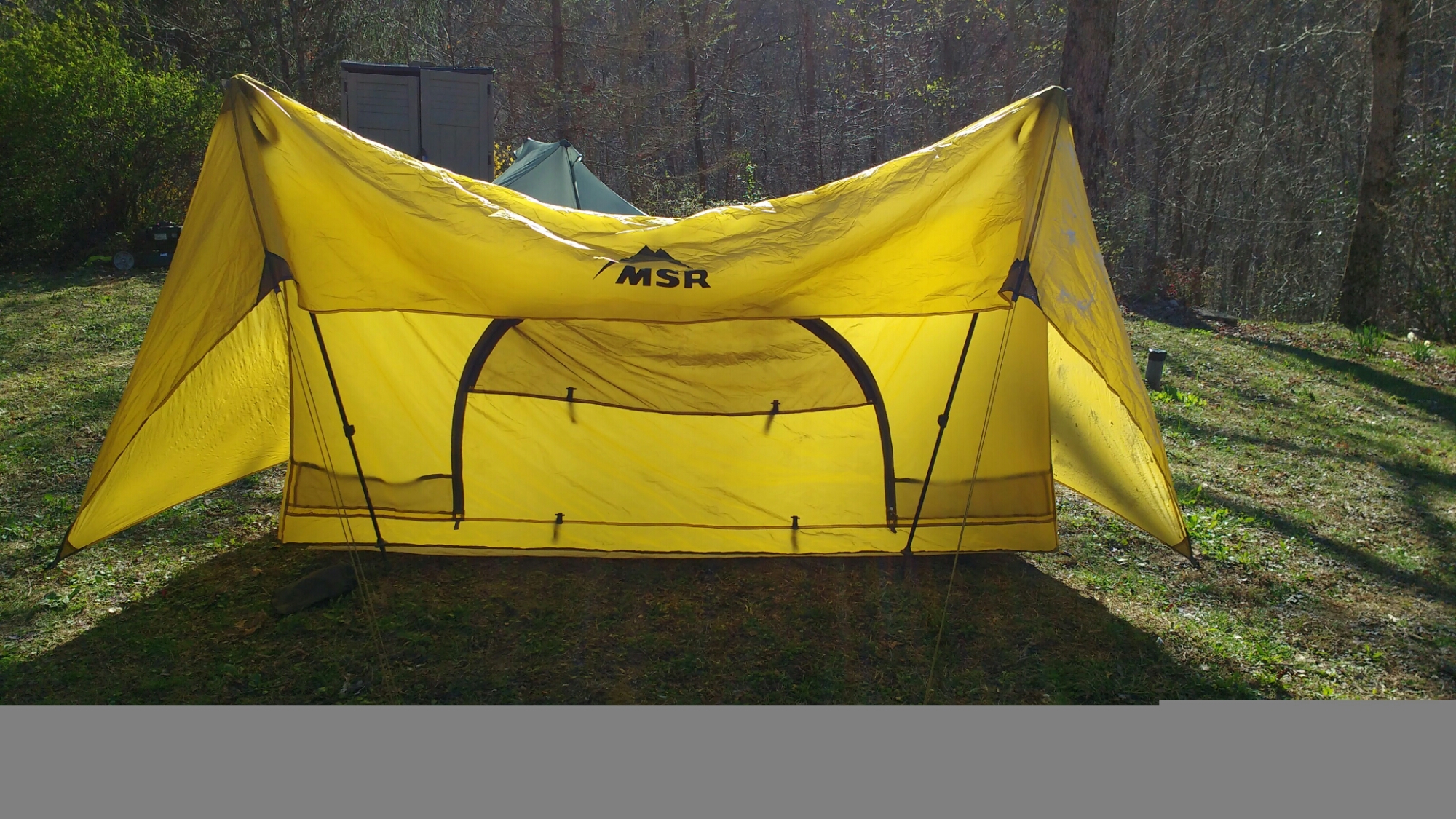 The Casa del James, on a sunnier day

To make matters worse, once a calm in the storm came, I attempted to cook dinner only to discover that my cooking fuel was missing, so add to my woes unreliable food supply for a few days

Suffice it to say, I was at a rough edge. I think if I had been closer to town, I would’ve been tempted to throw in the towel. Instead, I took a zero to dry everything off, move into the shelter, and recenter myself. I spent a day catching up on reading and had a few private and somewhat angry conversations with God. By evening a few matters came that turned me around. 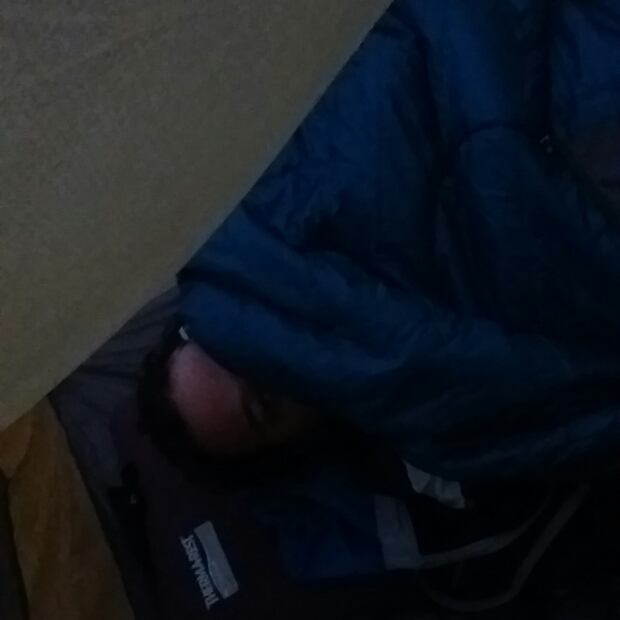 Me, hiding in my wet sleeping bag and hating the outdoors

First, a friend I’d met at the Top of Georgia Hostel arrived at the shelter. Vonnie was someone who I appreciated getting the chance to chat with and who’s sense of humor lines up with mine enough that I was able to relax and laugh a little bit. Second, trail magic appeared in the persons of Fivel and Little Foot, previous thru hikers who were stopped at Deep Gap passing out free burgers, chips, and beverages. Considering I’d resigned myself to no more hot food for the week, this brought some welcome cheer. 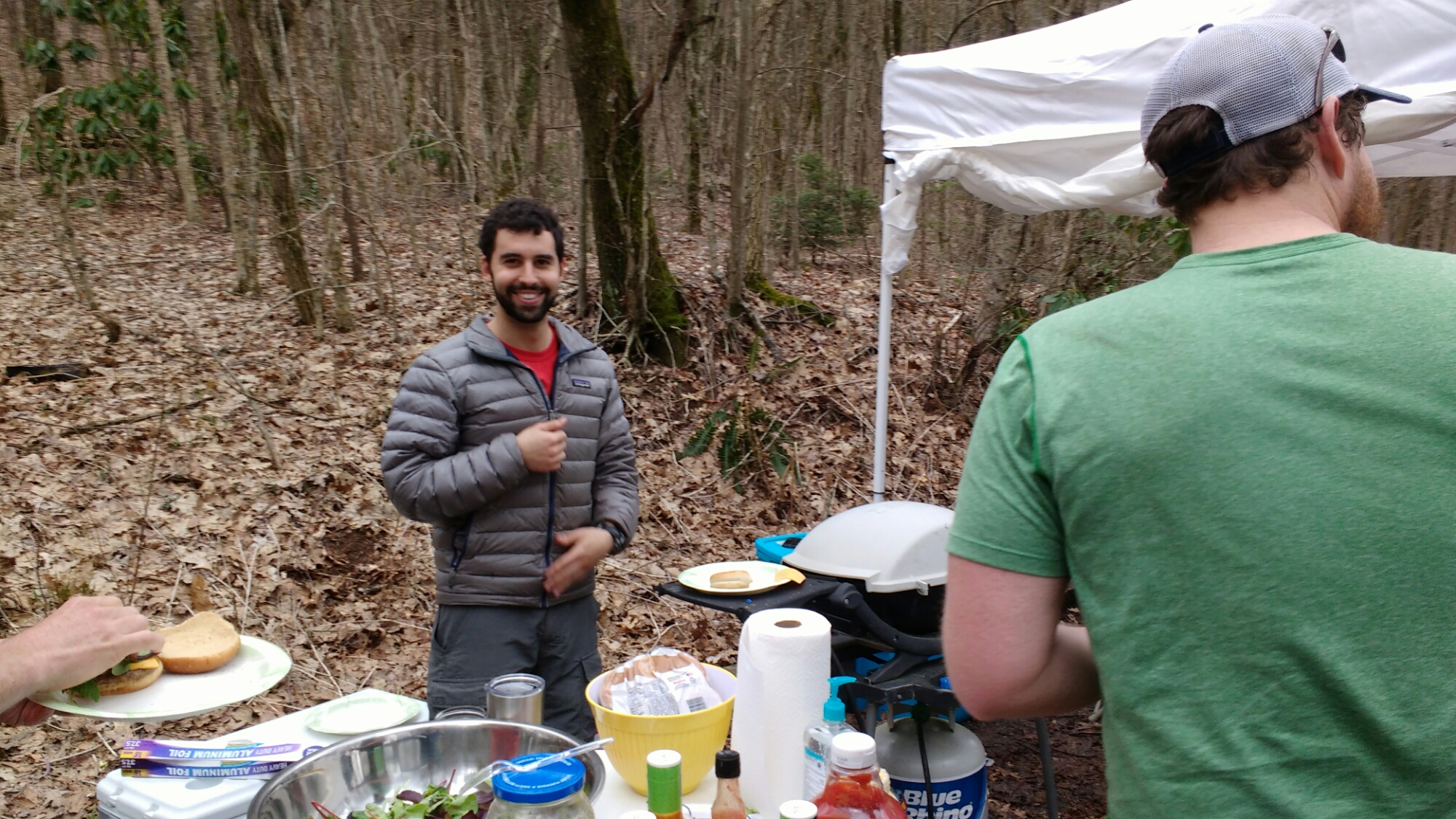 Thus refreshed, I set back out. The Trail by no means got easier, in fact, Albert Mountain I would easily label as one of the hardest passes I’ve thus far encountered. Almost sheer rock scrambles and unclear directions, all while balancing myself and my pack on narrow ledges. But you know what? At the end, I got to the hundred miles mark. 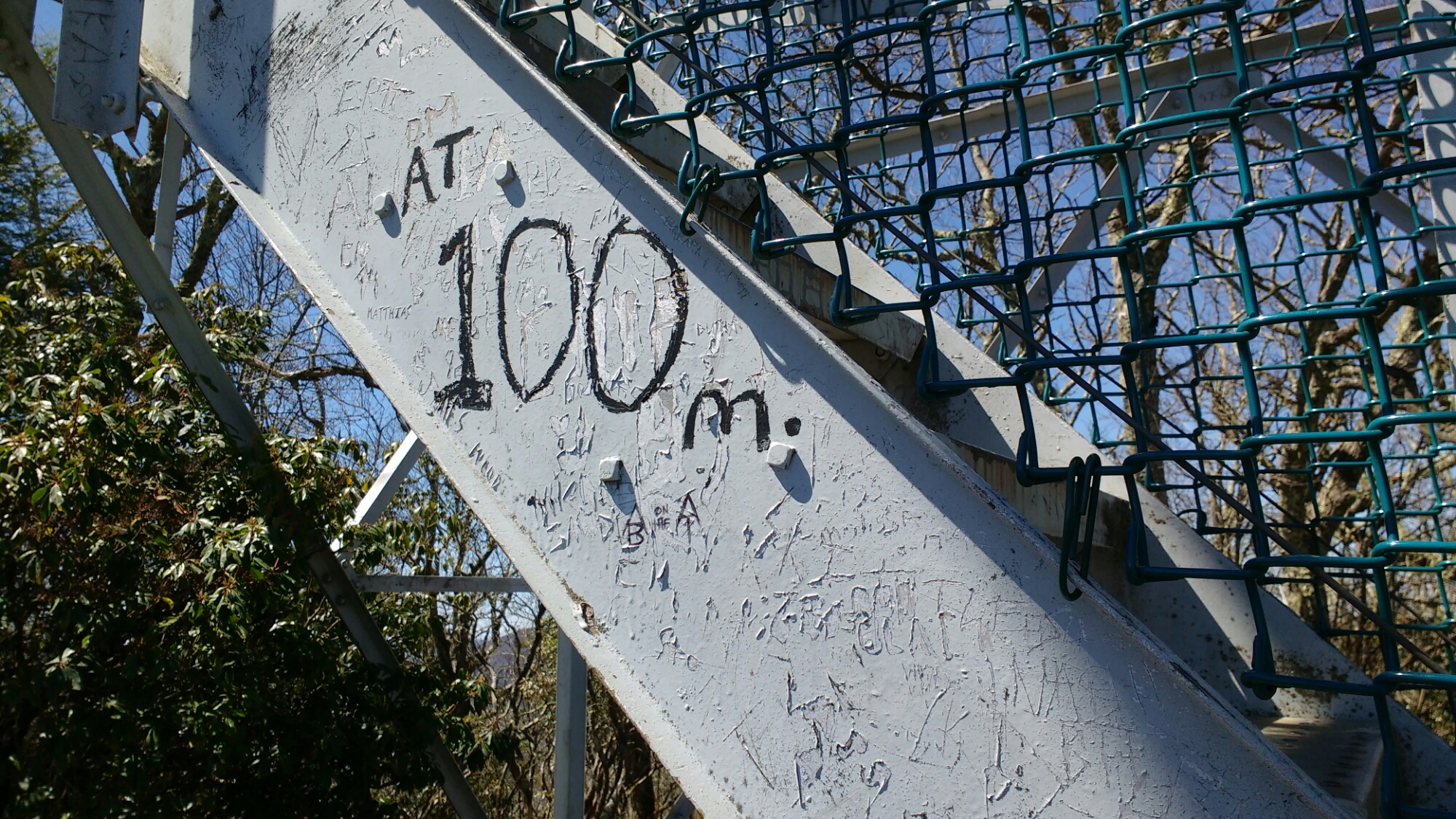 I honestly don’t know if I’ll make it to Katahdin. There’s so many factors beyond my control that play into that, but I can say that my “why list” is getting answered along the way. I’m finding a new trust in God to keep going. I’m surprising myself by the steps I keep taking. I’m losing weight. I’m getting my energy back. And I’m working through the things that have been weighing on my mind and heart for years 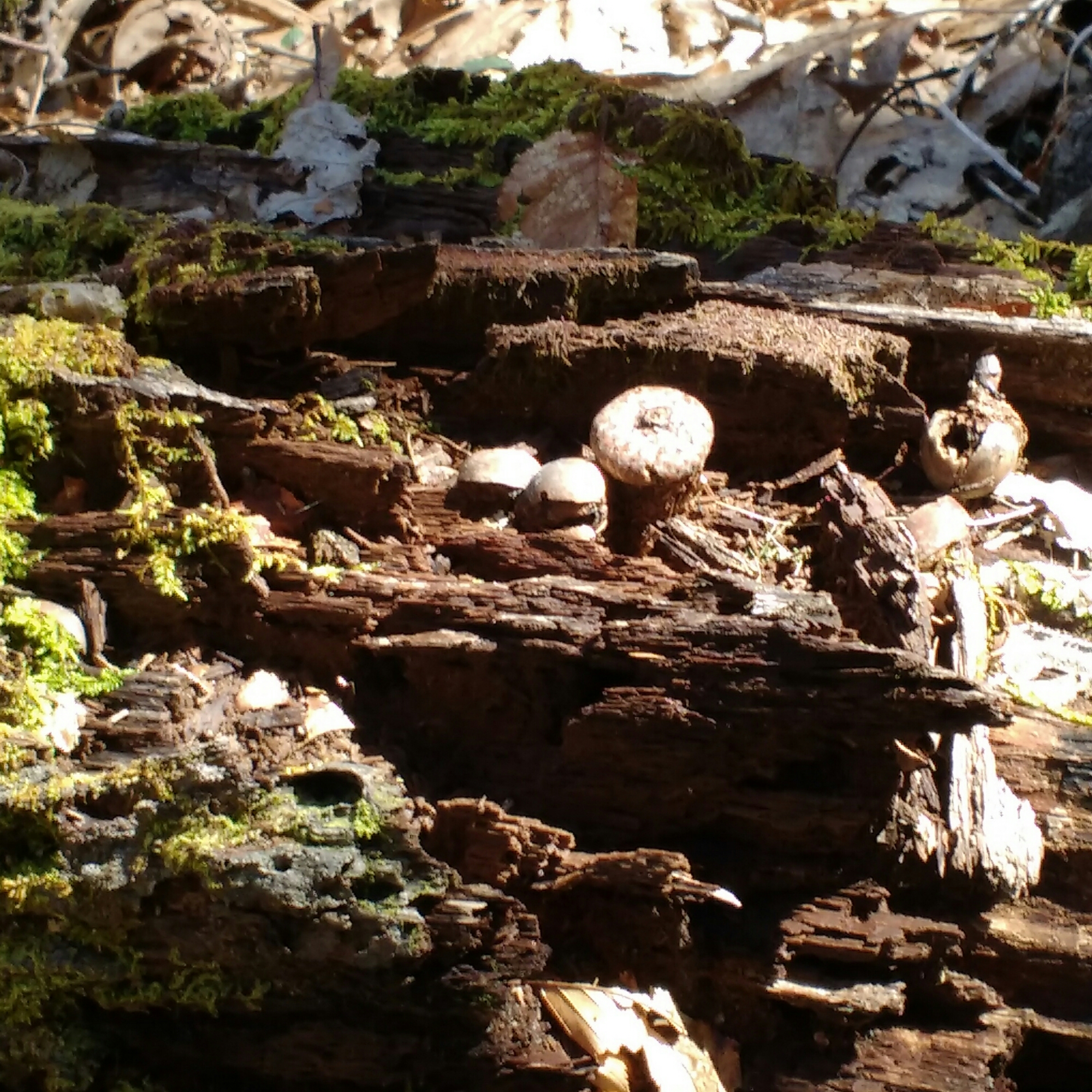 Why did I take this picture? Because I thought it looked cool

I picked up my trail name recently. When I’d started, I had previously decided that I would go by “MadMonk” which had been a nickname in college and I used it when setting up my Facebook, Twitter, and Instagram accounts for the hike. The nickname worked for me on multiple levels, but it also communicated what I thought I was going to be getting out of my hike. I have some pretty deep anger issues. Some as simple as dissatisfaction with my romantic relationships or career, others as pointless as frustration with the world in general as I see injustices like police brutality defended, or the rise of candidate Donald Trump. 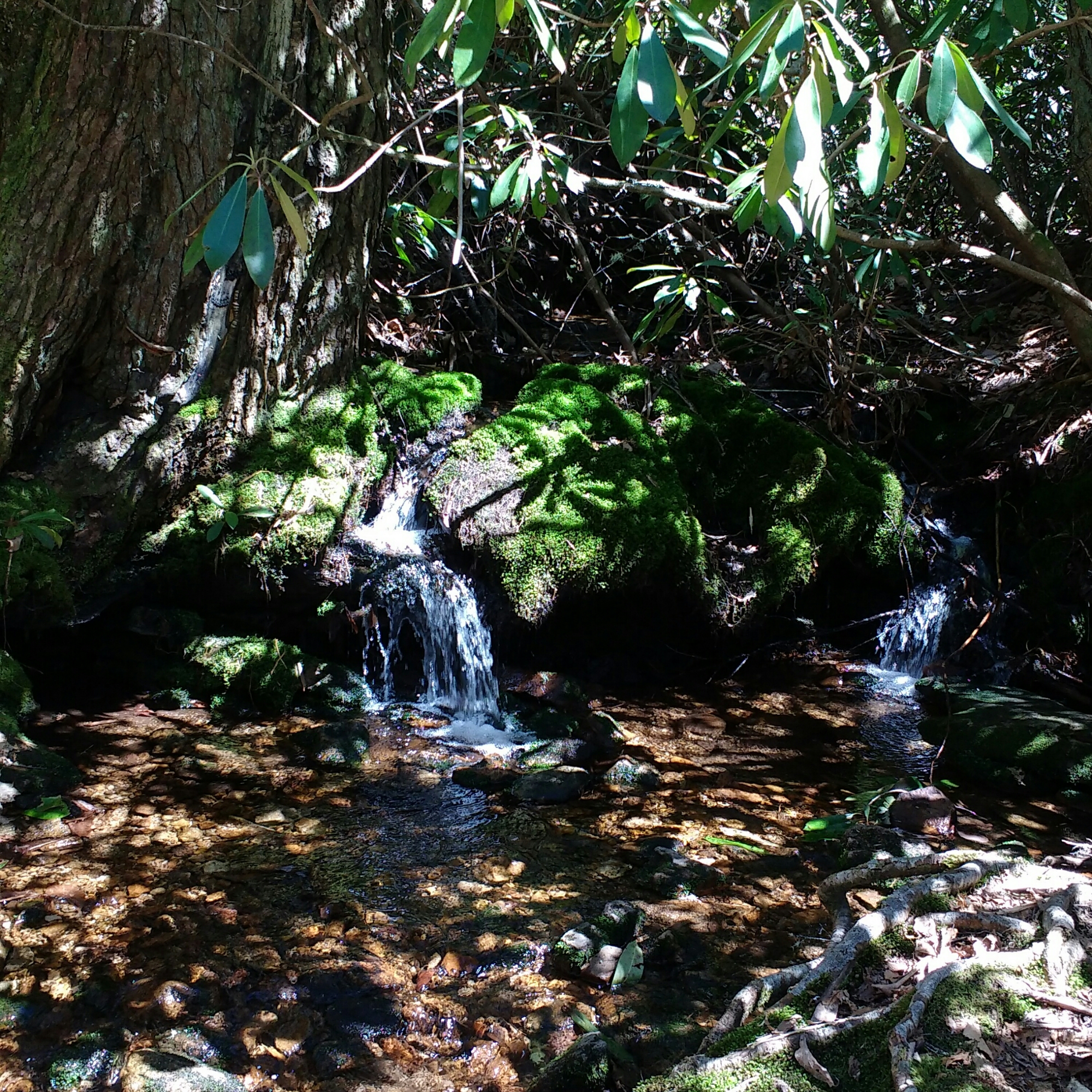 To make up for having mentioned Donald Trump on a hiking blog, here's a picture of a mountain stream

Besides the anger, I increasingly have desired to set myself apart from humanity in general. I loathe most conversation and would rather bash my head against a wall than talk on the phone. I desired to set myself apart, pulling away from others, and removing possible sources of further pain and frustration. I was “the Mad Monk.” But a week or so into the trip, I found out several other hikers had taken to calling me “Friar Tuck.” I never got an explanation as to why, but I’m guessing my bald spot played a part. 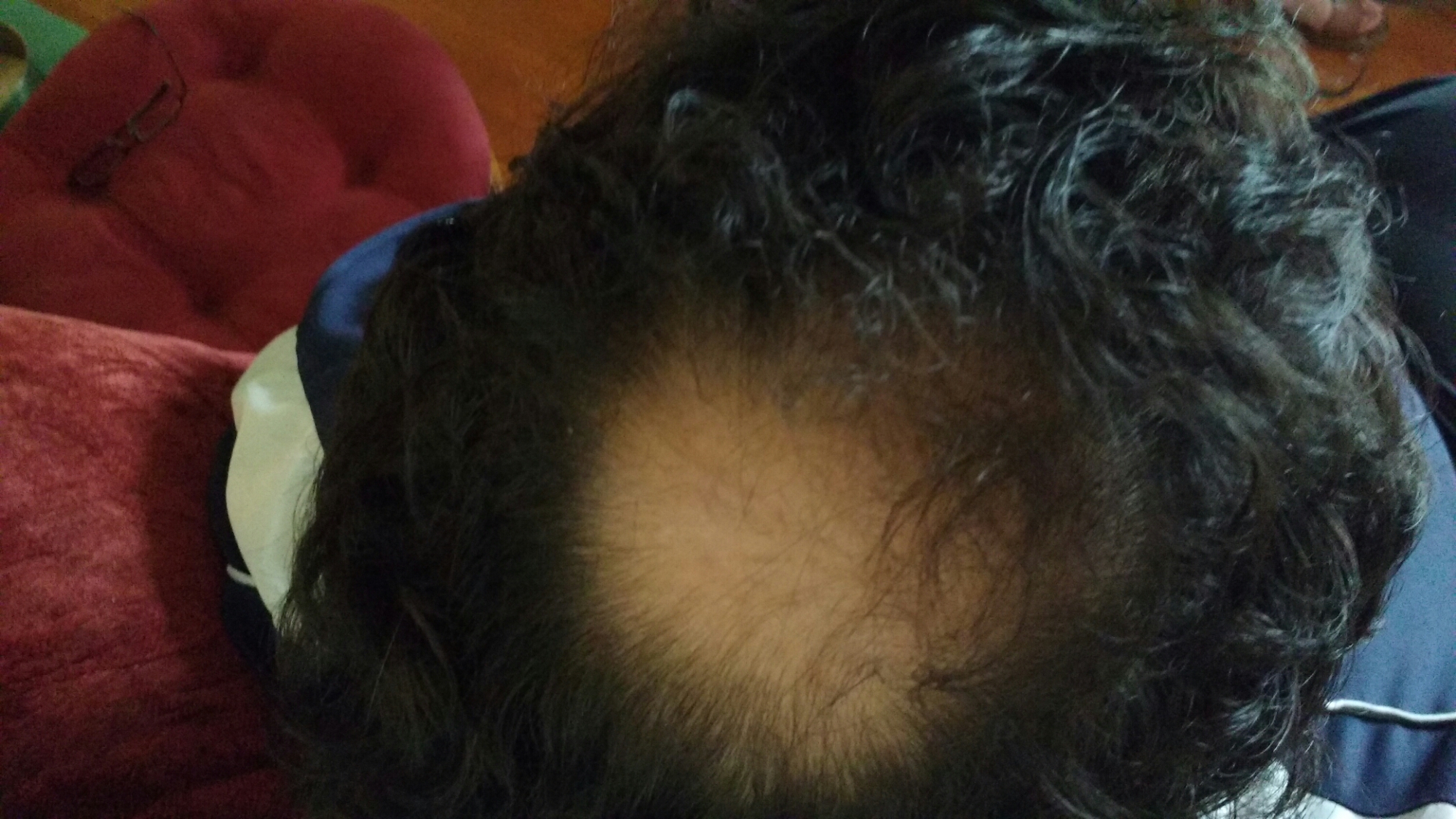 Top down view. Let's all be thankful for hats

It’s interesting to note that entomologically speaking the word “Friar” is likely related to the Norman word “frere” for “brethren. Friars are differentiated from monks in that instead of withdrawing from society, they live in service to it. They do not cloister themselves away, but rather insert themselves into their neighborhoods to show love and service to others. Living alongside their common humans rather than retreating from them. As I’ve been out here, gaining my distance, I’ve found my drive for connection again. Sitting around fires with fellow hikers, or walking through town meeting the locals and engaging in conversation. I’ve been letting go of my anger and rekindling my desire to actually LIKE people again. I don’t know where my hike will end, but I’m enjoying where it is taking me 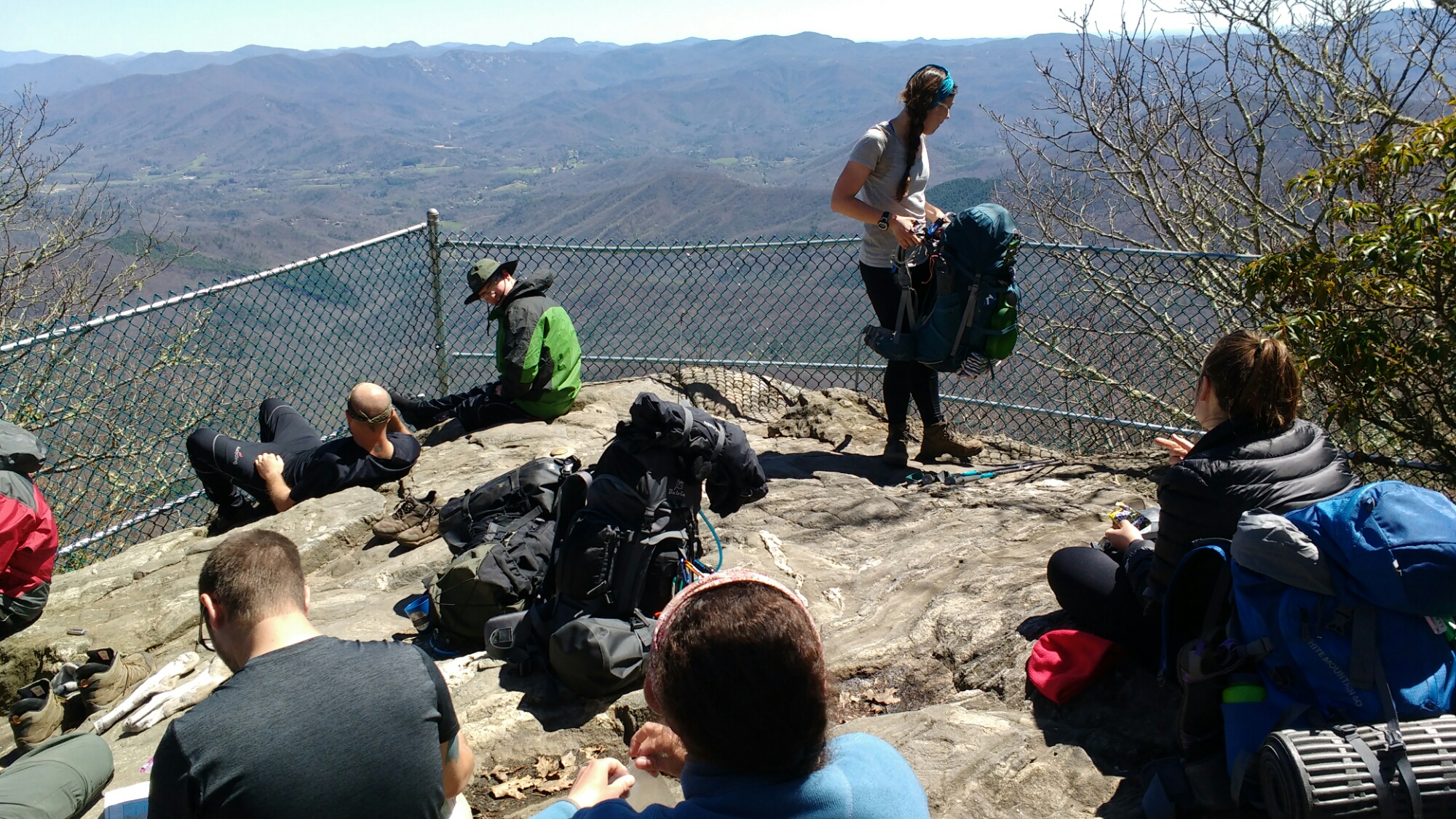 Hikers relaxing at the top of Albert Mountain