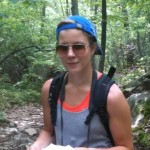 Wow, again, time flies! It’s been about three weeks since my last post, and a LOT has happened: friends met, adventures taken, food eaten. I’m currently at the Relax Inn off interstate 81 near Atkins, VA, in my own room, because I’ve decided that today is Treat Yoself Tuesday.

Anywho, here’s what I’ve been up to in the last three weeks:

After Hot Springs, I heard about a church group doing trail magic in Erwin, and decided to make it there in time to partake. I did three 20 mile days in a row, mostly because I had no one around to wag their finger at me (Twister was at Hot Springs with his girlfriend, and Hobble and those guys got a later start than I did.) In doing so I hiked with Fig, who is in his 60s and has hiked the AT three times and is on his fourth run through. Fig is from Maine, and is pretty hilarious with a very dry sense of humor, so we got along just dandy. Nothing too crazy happened in those three days, except I realized that hiker hunger was kicking in and my resupply in Hot Springs was not nearly enough food, and I had to make Ramen Bombs every night (ramen + instant potatoes + oil… Gross but filling).

I rolled into Erwin Saturday morning, and although I’m not a huge fan of Uncle Johnny, decided that tenting at the hostel would be the best option (it wasn’t, because I later realized I could have possibly stayed with Miss Janet. Ah well).

There, I sat down next to a guy, who introduced himself as Longhorn. I guessed that he must be from Texas and we chatted for awhile. He had started in Harper’s Ferry in February and headed south, and was almost done with the trail for now (he was planning on getting off in Hot Springs and going to Asheville. His job started end of May and he needed time to find an apartment).

After an exciting resupply hitch which included getting a ride from the sheriff, we caught a ride to the hiker feast. There, Miss Janet pulled up, and said she was taking people to a bluegrass festival. I hopped in her van, as did Roo and Longhorn, and off we went. 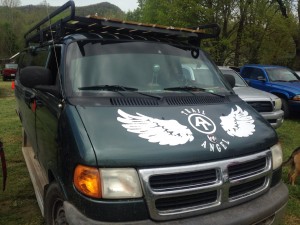 Miss Janet to the rescue!

The festival was wonderful– groups of musicians were playing in various books of the mayor’s property, while peacocks, yes, real live peacocks crowed and roamed around. After wandering around aimlessly for awhile I set myself down on a peaceful bench and got out my sketchbook to draw. After awhile a little boy of about 11 or 12 came over and asked to see my drawing. We chatted for awhile and he told me he plays the banjo and also likes to draw. He was a really sweet kid. He later came up to me and gave a rock he had carved and polished himself, which I’ve since turned into a pretty awesome pendant.

Some other hikers came over, including Longhorn, and after a little while we talked about Uncle Johnny’s talent show that night. Somehow, Longhorn decided I was going to dance at the talent show that night with him, and after a lot of persuading on his part I gave in and decided to give it a try. He taught me to Texas Two-step and a bunch of showy moves, including one where he flips me, and one where he dips me and my feet are in the air. We fell down a lot, mostly because I had no idea what I was doing, and had a fun time.

At about 4pm Miss Janet came back and gave us a ride back to Uncle Johnny’s. I had grocery store bought dinner (fresh tomatoes, radishes, pudding…mmm), and then it was time for the talent show. Red Panda read a hilarious poem about Hiker Hunger, another hiker played Mr. Tambourine man on the harmonica, and Longhorn and I danced, he well, me passably. In the end Red Panda won with her awesome poem, and we got free socks as a runner-up prize. 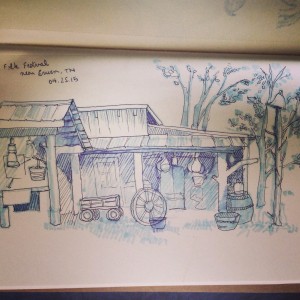 My sketch at the Bluegrass festival. 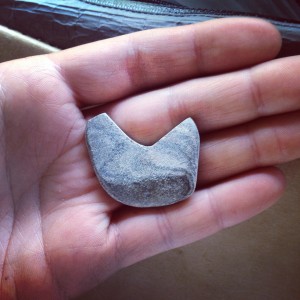 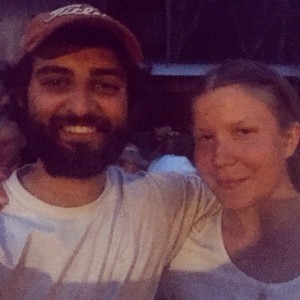 The night was clear so Longhorn cowboy camped next to my tent, until about 2am, when it started pouring. He was lucky that my tent can hold two people, so I let him in and went back to sleep. We both woke up at 5am the next day and had a blast chatting and telling each other tales from the trail. Some of my favorite quotes from Longhorn were:

“That beard looks like it’s been through some shit.”

Later that morning I bid goodbye to Longhorn and decided to keep hiking since Hobble et al were over a day behind me, though I didn’t realize until later that I missed Twister by only a few hours. About two miles from town I met Fiddlehead and Sota Sam, who were wrangling with a stray dog, a puppy really, maybe 4 months old, which has followed them from town. They decided together to get her to the next town, and Fiddlehead said she would take the pup, who we trail named “Trouble” if she had no owner. That night was pretty miserable, cold and rainy, and I passed out after a 13 mile day.

The next day, after saying bye to Sam and Fiddlehead, I kept going, eventually running into familiar faces: Fig and Red Panda, who I hiked with up till Damascus.

The only excitement in between was the rabid deer I encountered near the NC/TN state border. I saw a deer go by and said out loud to myself “oh a deer.” But when the deer saw me it ran right at me, and it’s mouth was foaming. I screamed and yelled and hit my trekking poles together until it ran off, but it looked like it wasn’t in great shape. For the next few miles I kept glancing back and thinking I heard it following me. 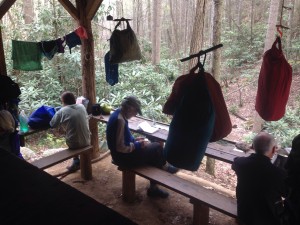 After a well-deserved zero in Damascus, saying hello and goodbye to Beast, who I finally caught, and then lost again on my zero, and more fish tacos than you can dream of at Hey Joe’s, I kept moving. Fig was getting ready to get off trail for a week or so to meet up with a friend, so he stayed back, and Red Panda dropped her guidebook and had to go back to look for it, so I was flying solo again. 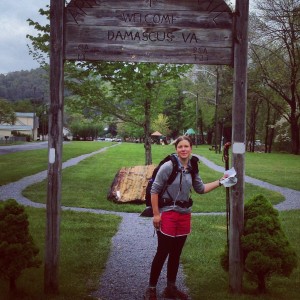 I ended up at Thomas Knob shelter, 28 miles in. About 4 miles from the shelter I met Morel, and his wife Emily and son Henry, who had a camper and were doing trail magic. I ended up walking with them up to see the ponies a few miles from Mt. Rogers and the shelter, and then said good bye and hiked the last mile or two alone. There were lots of people camping, but just one other person at the shelter, a 60 ish year old retiree middle school librarian named Long Overdue. She was really nice so I just decided to shelter for the night.

The next day I took my time in the Grayson Highlands, enjoying the stark landscape and the ponies. I eventually hiked out of the park to Trimpi shelter, and today I passed Marion, VA, and booked it to Atkins to resupply at the Sunoco, and ran into some folks Beast has been hiking with, who I think I’m going to hike with up to Pearisburg.

Well, that’s all for now. I’ll keep on keeping on. Maybe it’s the endless supply of endorphins, but I’m having a blast out here!