The first day of Pennsylvania I was hit by the heaviest downpour yet. One of those rains with droplets like water balloons. I scrambled the next mile praying I hadn’t missed the sign for the shelter but it turned out unmissible. Quarry Gap Shelter was impeccably maintained, one of the nicer sites I’d come across, and it even had a roomy covered picnic table with a complete chess set and a deck of cards. I settled in to wait out the downpour. An hour later Wayfarer arrived. I pointed out the chessboard and mentioned my phone had a chess clock app. For the next four hours, even after the rain had stopped, we played about twenty games of blitz (5 minutes each) chess. I won the first two games but he won more in the end. When I could wait no longer I ate dinner and pushed along to the next shelter to cover my 17.4 miles for the day.

Day 82 Neon Mountains (a faster thru hiker who had taken some time off), Forest, Firestarter, and I all crossed the official halfway marker: 1094.6 miles, right at the crossing with “Dead Woman Hollow Rd.” Despite the conspicuously awful address we took some celibratory photos. Forest and Firestarter are pictured at an old half-way sign at the top of the post. As the trail mileage shifts slightly every year, so does the midway point. 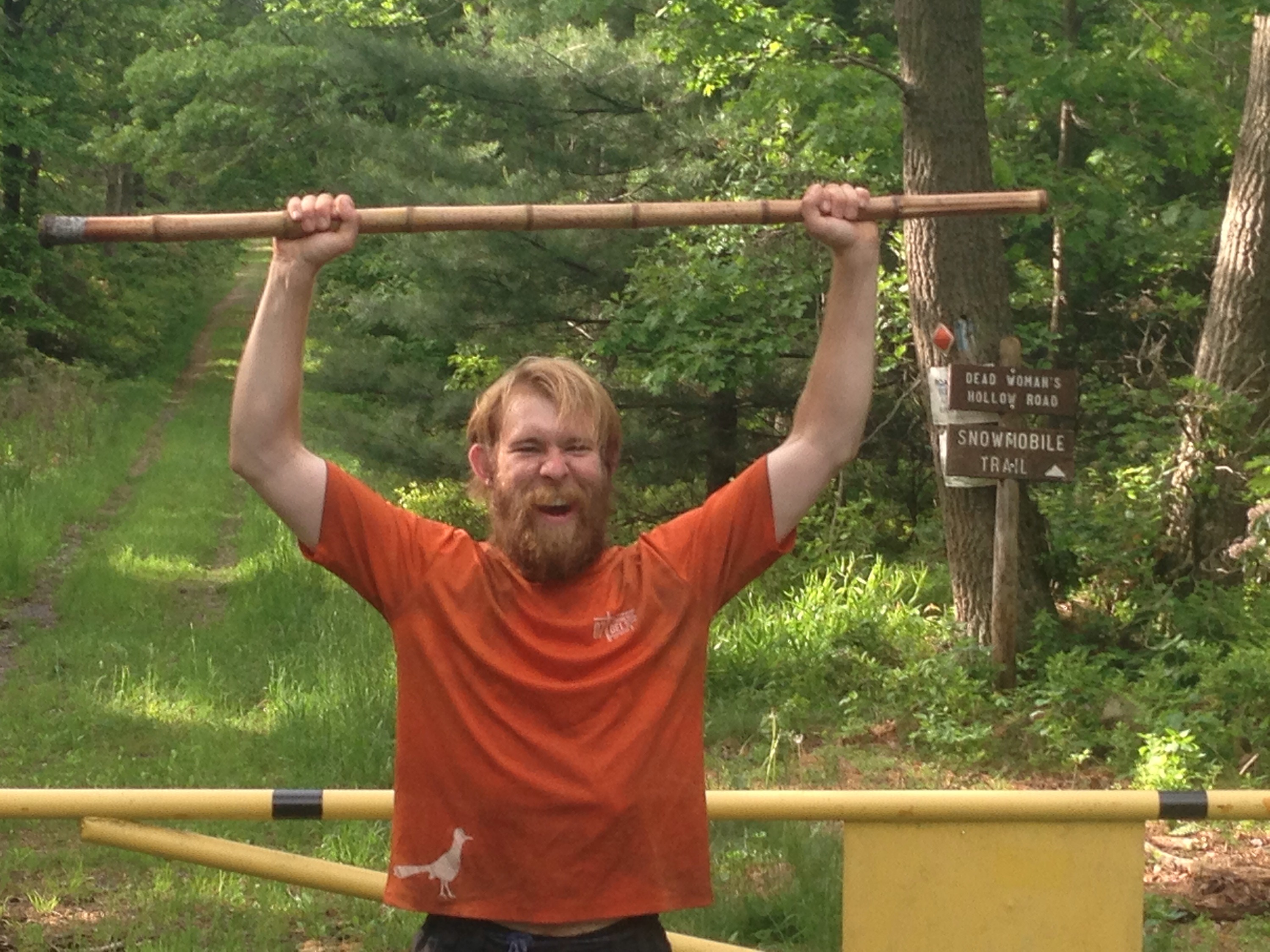 A few miles further we arrived at the home of a great AT tradition. Half way through the trail is time for the Half-gallon Challenge, in which you consume half a gallon of ice cream in a single sitting. A true test of that hiker appetite, as well as your tolerance for dairy. 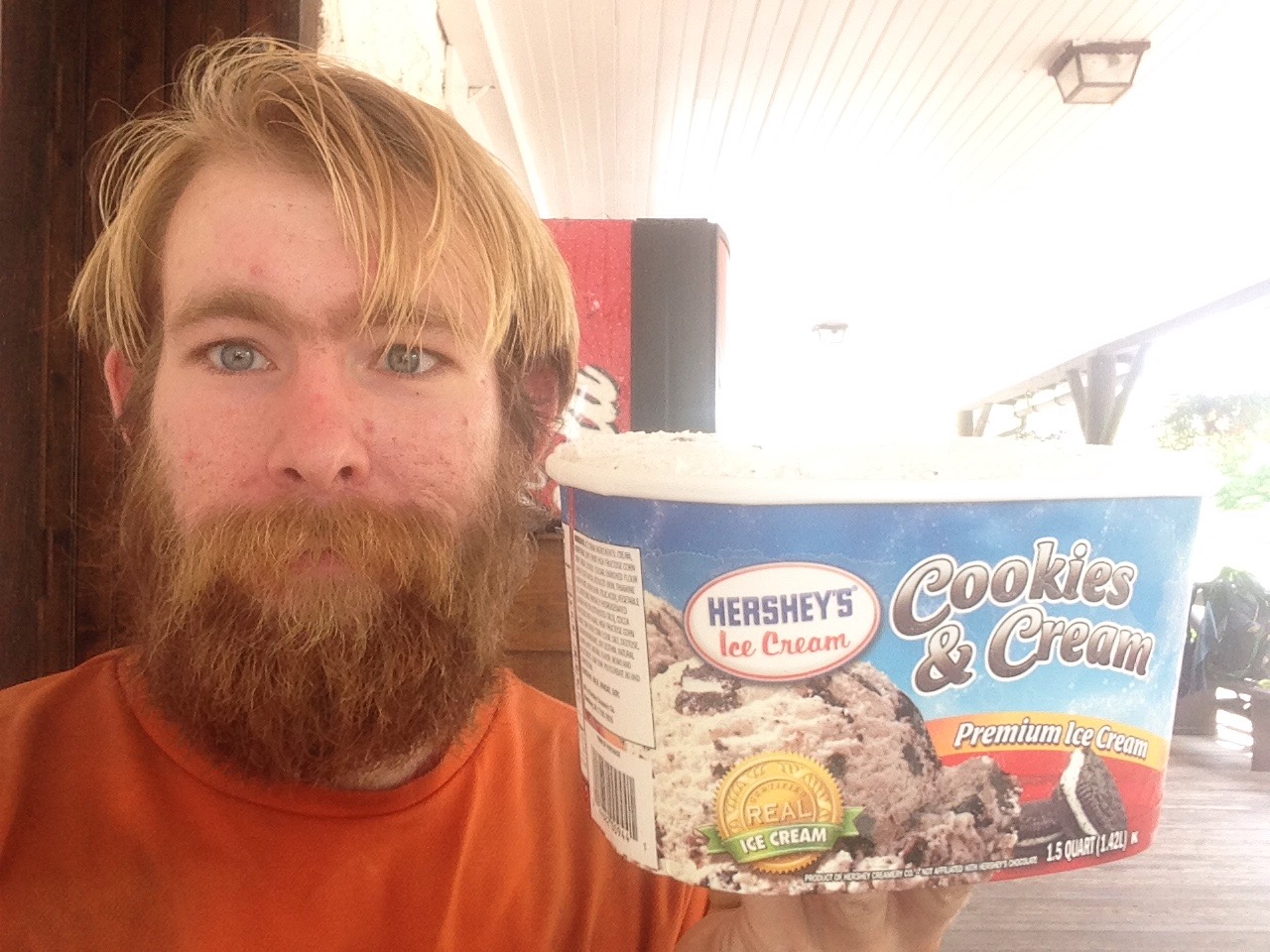 After finishing the 1.5 quart of cookies-and-cream they gave me another pint of cookie dough to make the half-gallon. I finished in 34 minutes. The bottom of that last cup turned unappealing, but all-in-all it wasn’t so bad. Most hikers come out alright, but every once and a while it doesn’t settle, and . . . well, you know.

The next day I arrived in Boiling Springs, PA around noon. Passing by the ATC center there someone called out my name. Guess who? Airborne. Got there before me. Claimed to be exhausted after hiking through the night. Quite the mystery, that guy.

I then went to the cafe for lunch. I hung around a few hours doing my usual blogging and catching up with people. Around four-o’clock Firestarter arrived. We played some chess and then went to the backpacker’s campsite just before town. Hawk was there, as well as Ishmael (section hiker), Peter Pan (named for green shirt), Youngblood (he’s eighteen), Frizzle (after the Magic School Bus’s Miss Frizzle, a hydrologist grad student who became a young hiker’s mentor in a previous year), and others.

I set up my tent amidst the unmowed grass, cooked dinner while fending off a mosquito cloud, and there being no decent logs or rocks I sat on the ground. And then the train went by about twenty yards from the tent site. It was actually so loud that when I blew in my harmonica as it passed the harmonica couldn’t be heard. Well thanks for the accomodations, Boiling Springs! Very considerate of them, considering there was no camping alowed for the next fourteen miles beyond town.

Then I proposed to Firestarter that we forget this dumpy campsite and go for a night hike. He agreed. So I packed up my tent around eight-thirty and on we went. We pushed as far as we could without head lamps, enjoying how my feet found their footing even through the inkiest shadows. It’s amazing what the body can do. We passed throug many farm fields, some of them sparkling with lightning bugs, some of them haunted by cows. By three a.m. my mind and body were shutting down, but miraculously I managed not to fall down until my tent was standing.

We slept in until Hawk, Youngblood, and Frizzle arrived the next morning. We joked that they got just about as much sleep as we did thanks to that punctual train.