I didn’t sleep well in the shelter. My throat was sore and my nose stuffy, and a hiker below us was talking in his sleep. My earplugs didn’t quite block out the sound. I forgot how much noise you have to block out in shelters. The soft patter of rain on the roof didn’t deter me from wishing I had set up my hammock. I woke up at 5am by most of the bottom bunks getting their stuff packed up, including Birks. By the time I was ready to get up around 6:30, most of the shelter was cleared out.

I had trouble getting up and down the loft, so I packed everything up and brought it down in one trip. I ate breakfast which was oatmeal packets and half a raspberry pie. The small boxed fruit pies have an enormous number of calories for the small size, so they’re perfect for hikers. A family doing a small section with 2 boys around 10 and a younger girl joined me at the picnic table. Rash, Piñata, Mulga, and TBA joined me.

Rash and Piñata left first, followed by Mulga and TBA, then me. We had some moderate small climbs out of the gate to get to the top of Mt Greylock. We all met again at the summit which was crawling with day hikers. The view was completely obstructed by fog. I stopped for a snack then headed out a little while after Rash and Piñata. 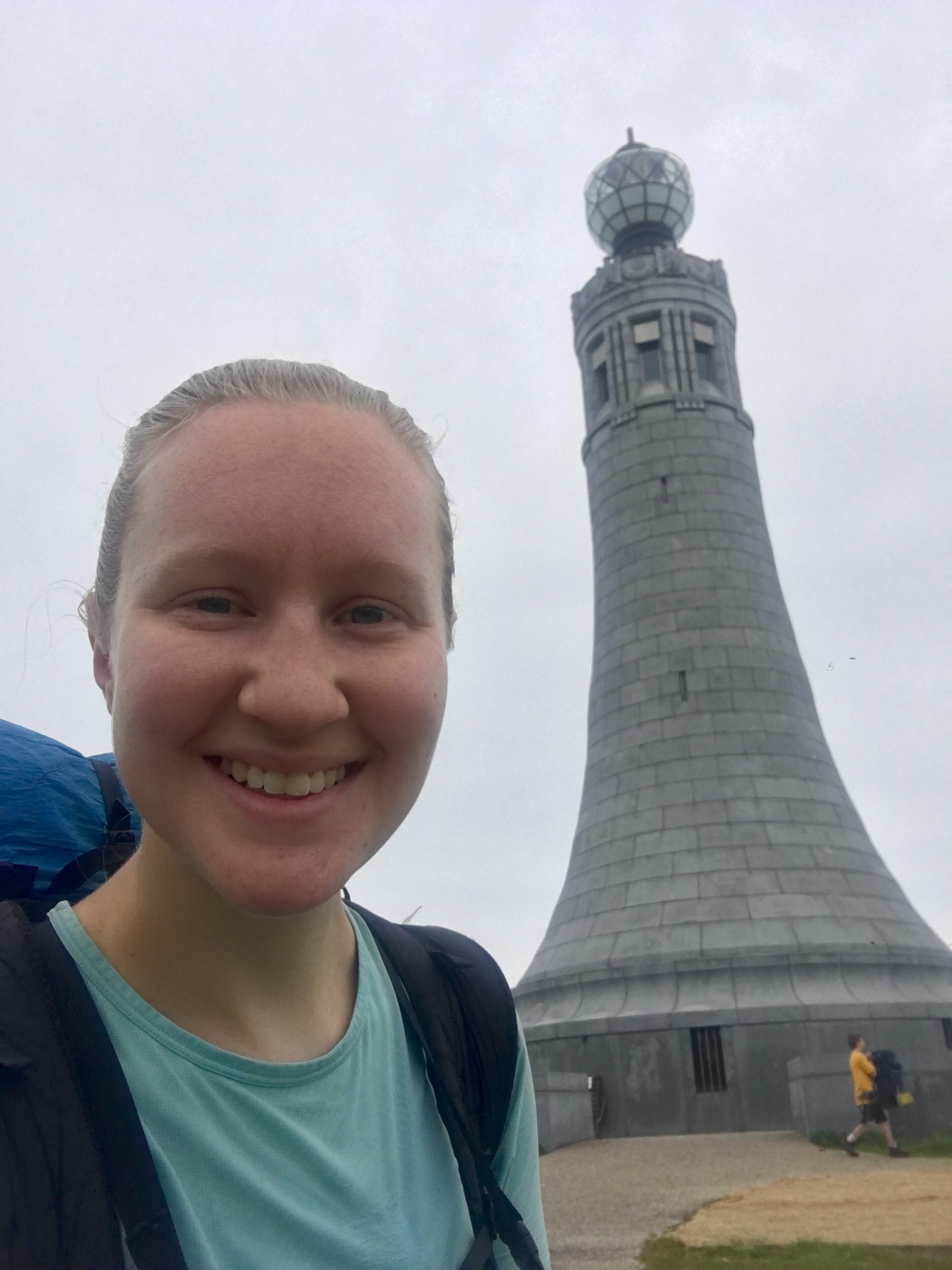 The tower on Mt Greylock

I was having trouble getting in the groove of hiking, and felt like my feet were in molasses. My throat still hurt and my nose was runny. I had no energy, probably from a combination of my cold and not sleeping well last night. I stopped at Mt Prospect to sit on the rocks in the sun and relax. I texted my family and flipped through Facebook, and the initially foggy view cleared and showed a beautiful farmland with houses. 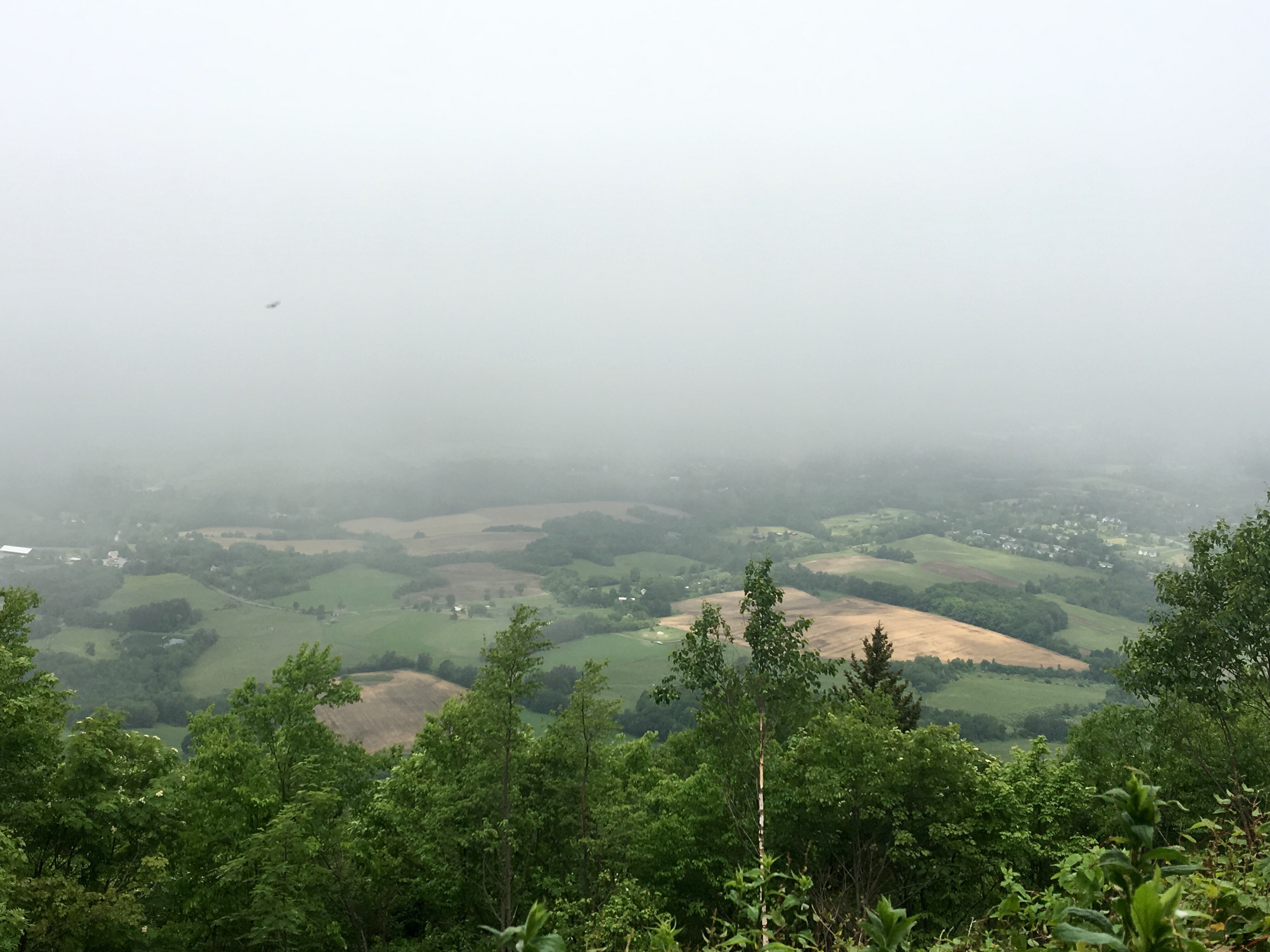 I was out of water save for a tiny sip. I wanted to eat more food, but everything I had would make me thirsty. I left just as the flip flop couple from New York who slept next to me on the loft last night showed up. The descent was steep and muddy at times. When I finally got to the stream, I took a leisurely break sitting on a mossy log. I ate snacks, filtered water, and enjoyed the time without my pack. The mosquitoes surprisingly weren’t terrible, so I was able to relax and enjoy myself. The trail went through a town, passing over a small bridge crossing a river. The bridge was decorated with handprints and I saw a beaver swimming in the river. 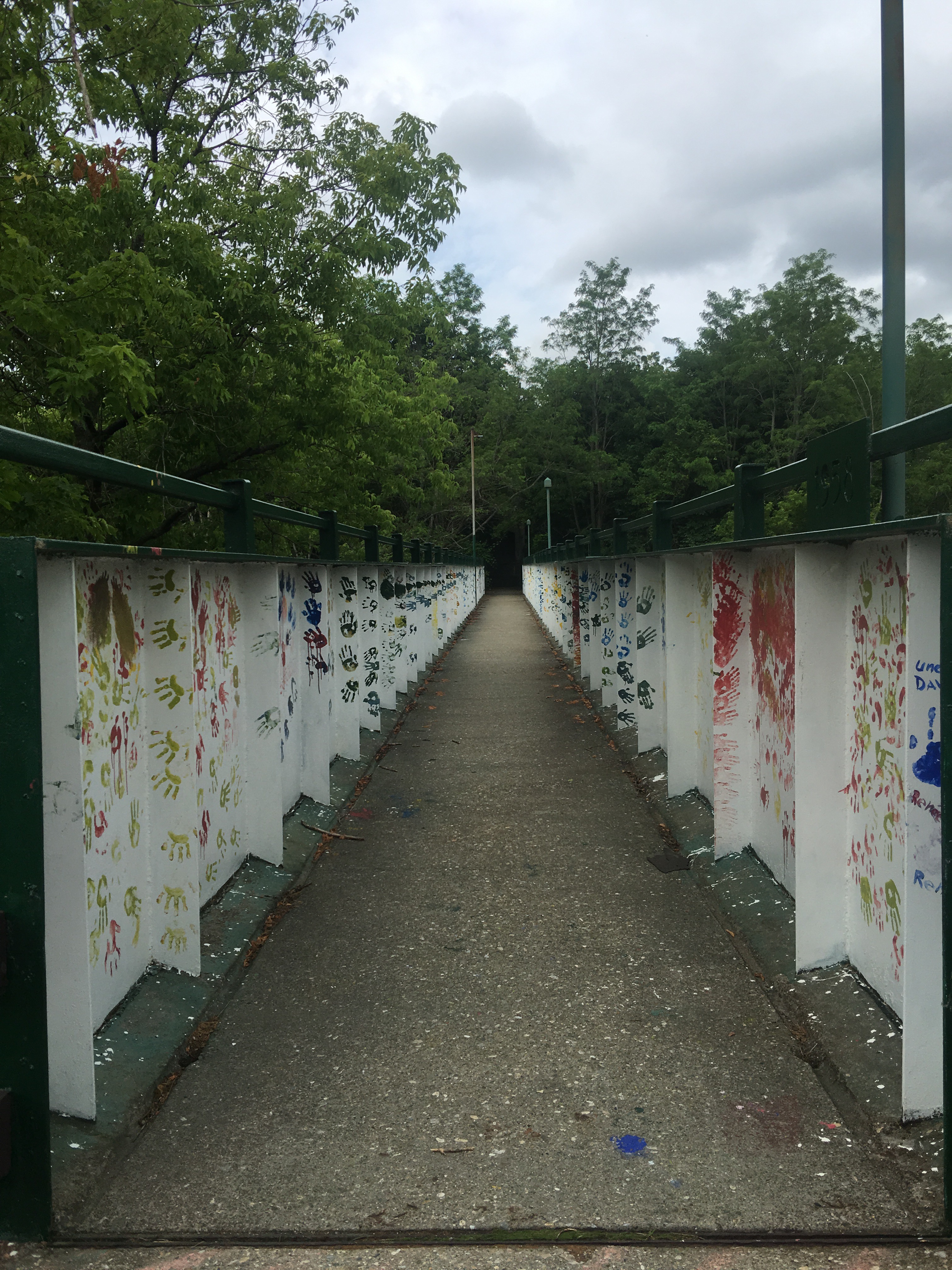 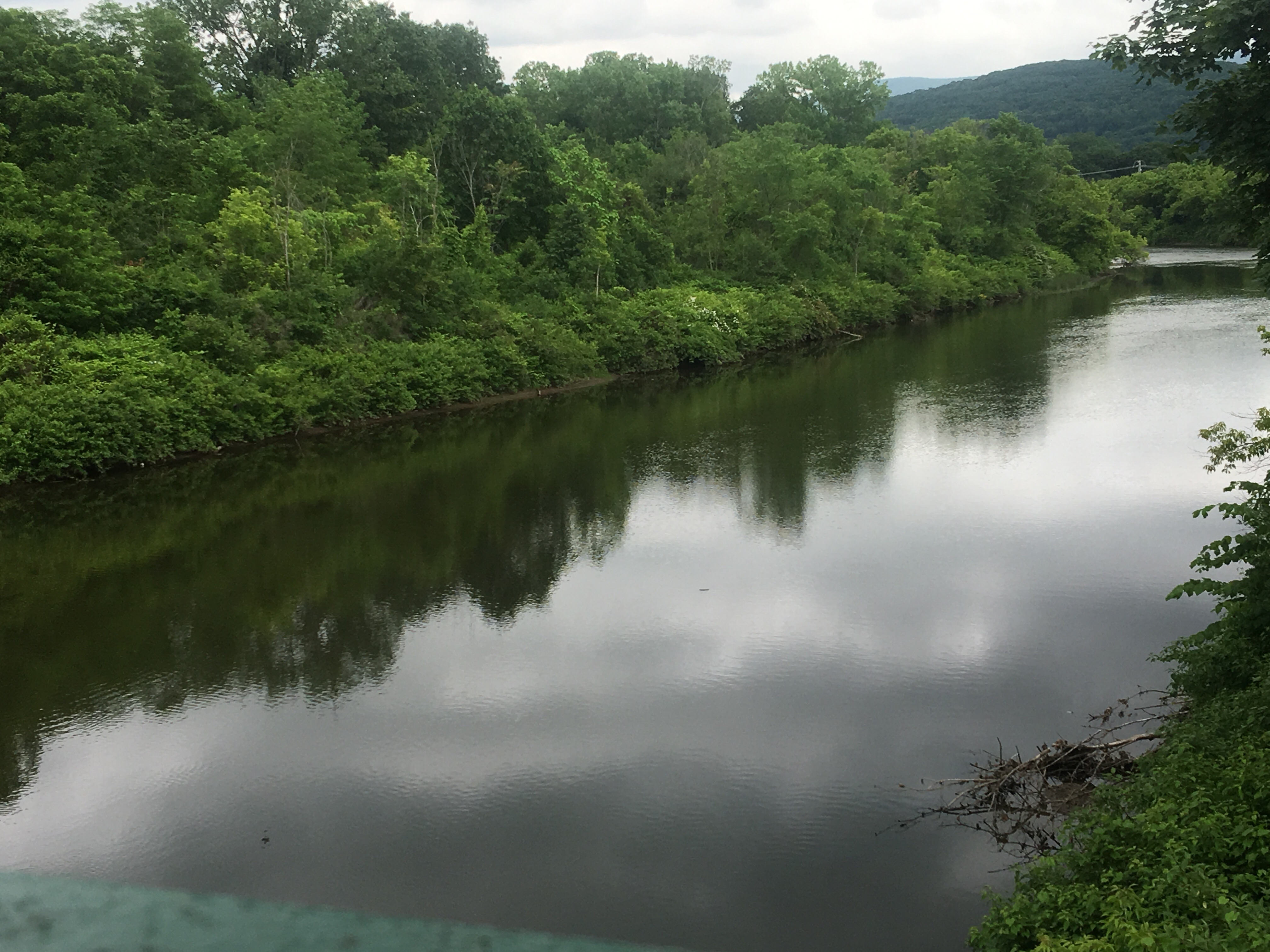 On the trail out of town, a house had a sign labeled, “AT hikers: please help yourself to the water”, and I realized how awesome it was that complete strangers are nice to us. Seeing that sign made me love the trail, despite all the difficulties thrown my way. 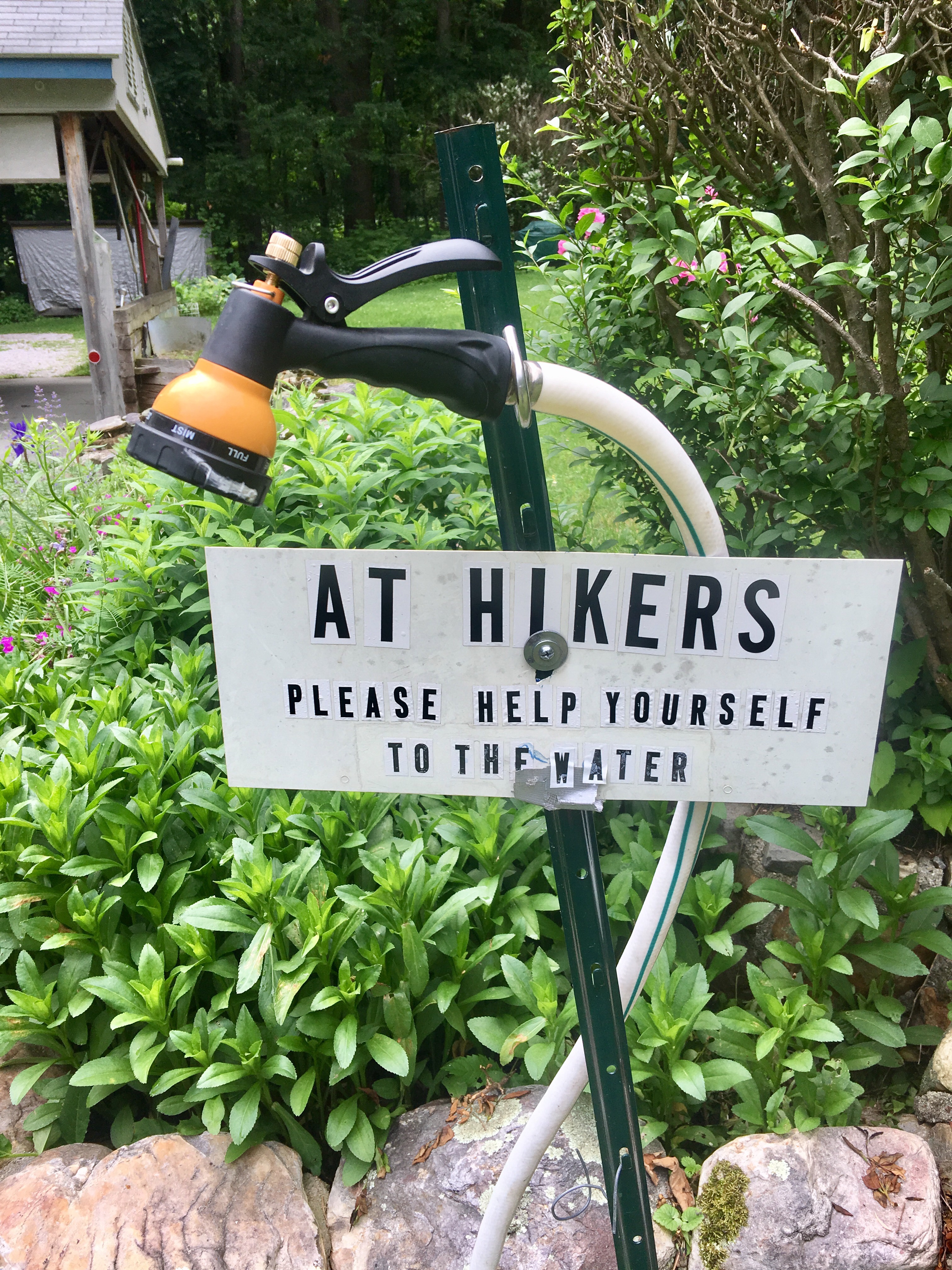 The trail followed a stream through the forest and it reminded me of coming out of Delaware Water Gap. I came to a steep rock scramble with very slippery, wet rocks. There was a blue blazed bad weather trail, but I opted for the white blazes. In hindsight, I should have taken the bad weather trail, because the real trail with the very slippery rocks was dangerous. I slipped twice but luckily didn’t fall.

I met up with Mulga and TBA again. I also met a man named Wombat who was carrying a friend’s pack who has ALS. The man with ALS is named Rick Marks. I met Rash and Piñata at the Vermont border and Rick came and signed the log. 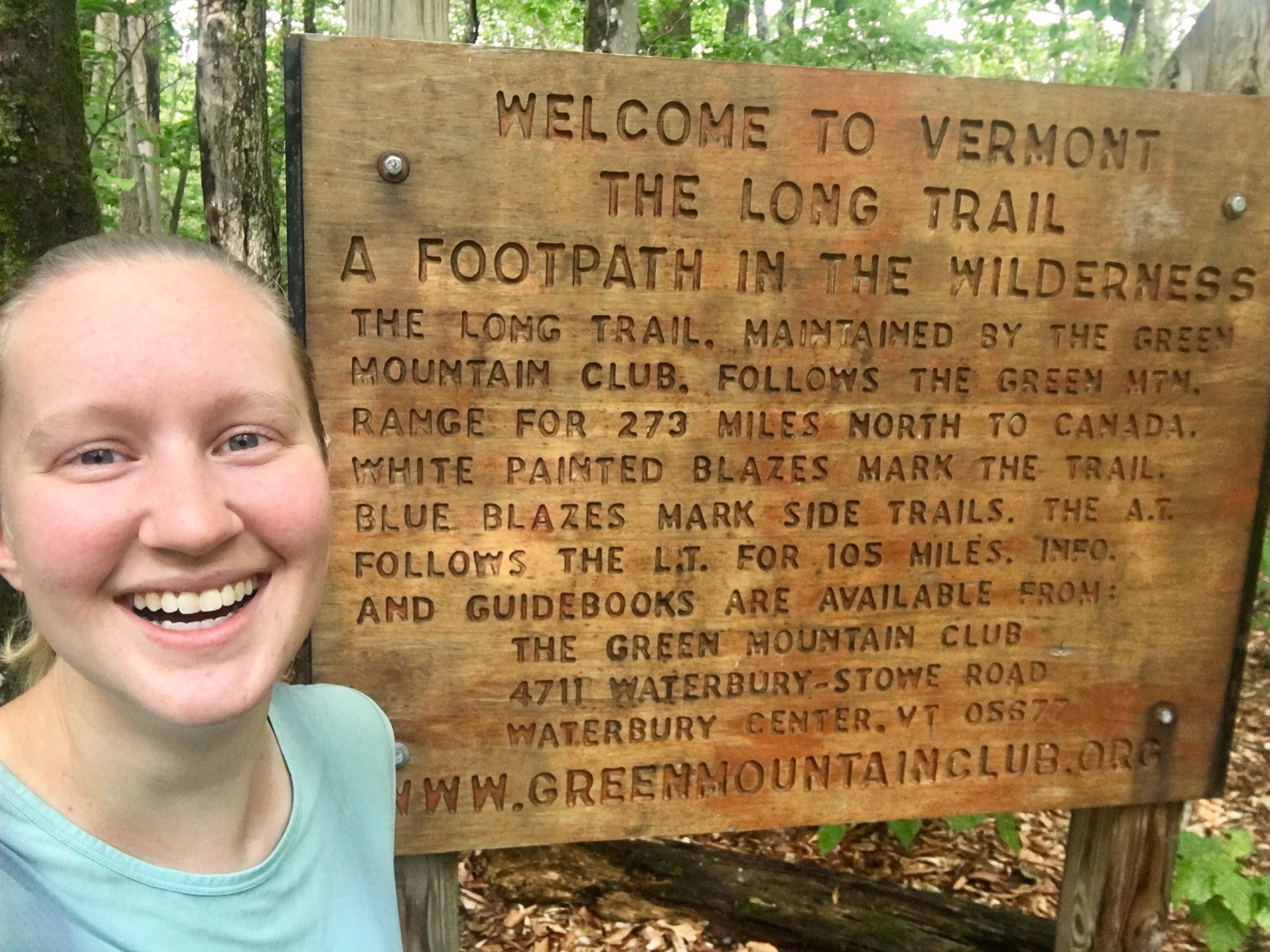 Vermont border and the start of the Long Trail

Right after entering Vermont, the mud increased. They had stepping stones and ways to cross some of it, but most of it we were on our own. We made it to the shelter with only one mishap of Rash stepping in ankle deep mud. 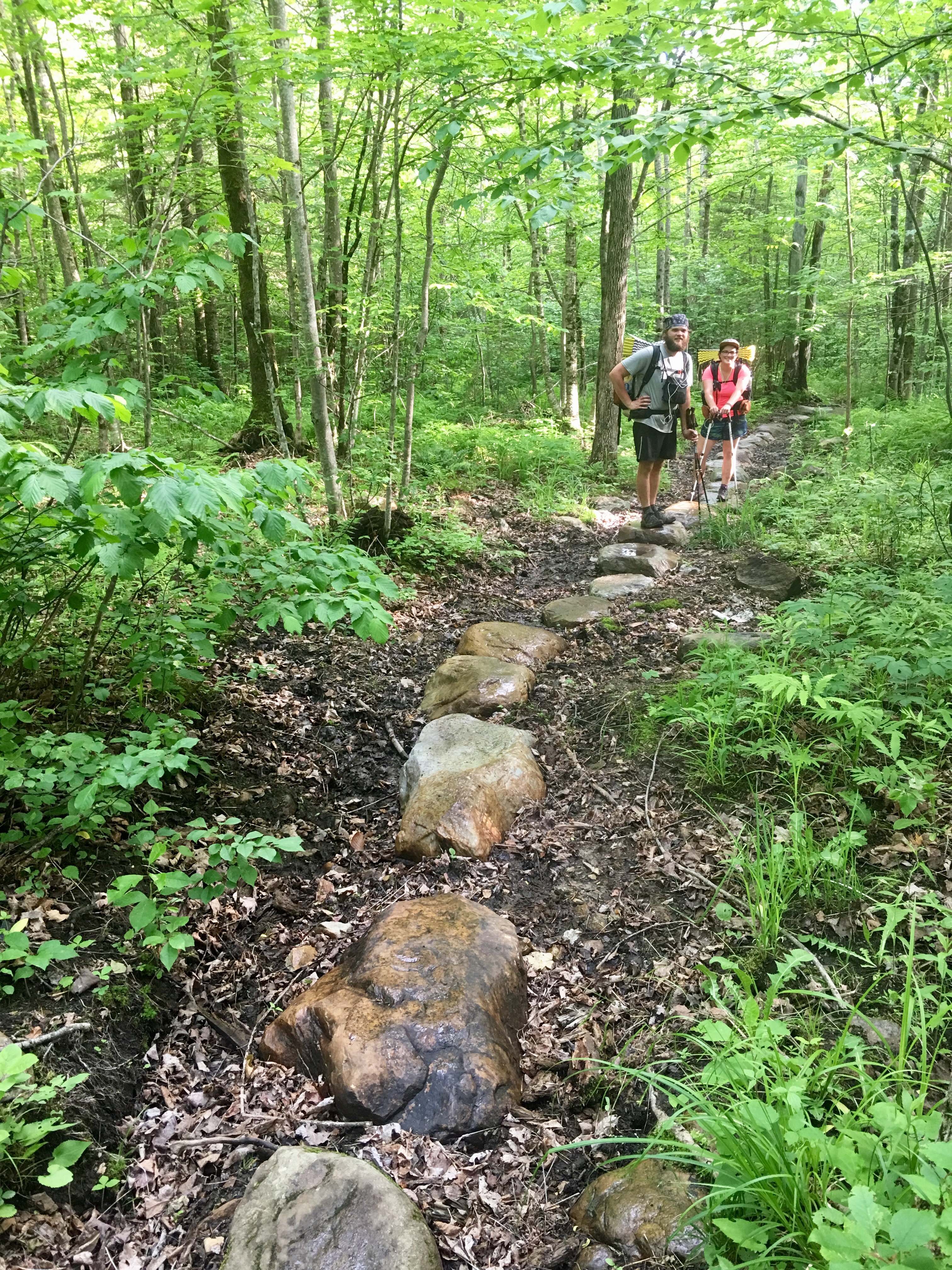 Rash and Piñata on a long line of stepping stones

At the shelter, we met Superman and Splash who had their tent near our hammocks. They both did the trail twice each, and met doing trail magic. Their dog Mabel, a pointer mix, was really sweet. They built a fire along with a flip flopper, and Superman told us stories from his thru hike and gave us advice. Geiser showed up later and joined our fire. The man leap frogging with the ALS man’s pack arrived again with his pack as we were turning in.

I woke up to the sound of Medicine Man putting away his tent around 5am. I went back to sleep, and woke up to rain on my tarp around 6:30am. I decided I would stay cozy until the rain slowed down. I peeked under my tarp and saw Rash was still in his hammock. When the rain stopped around 7am, I got up and had breakfast in the shelter. Rash ate breakfast under his tarp earlier. We talked with a LASHer while I ate and pet Mabel who came to say hello. 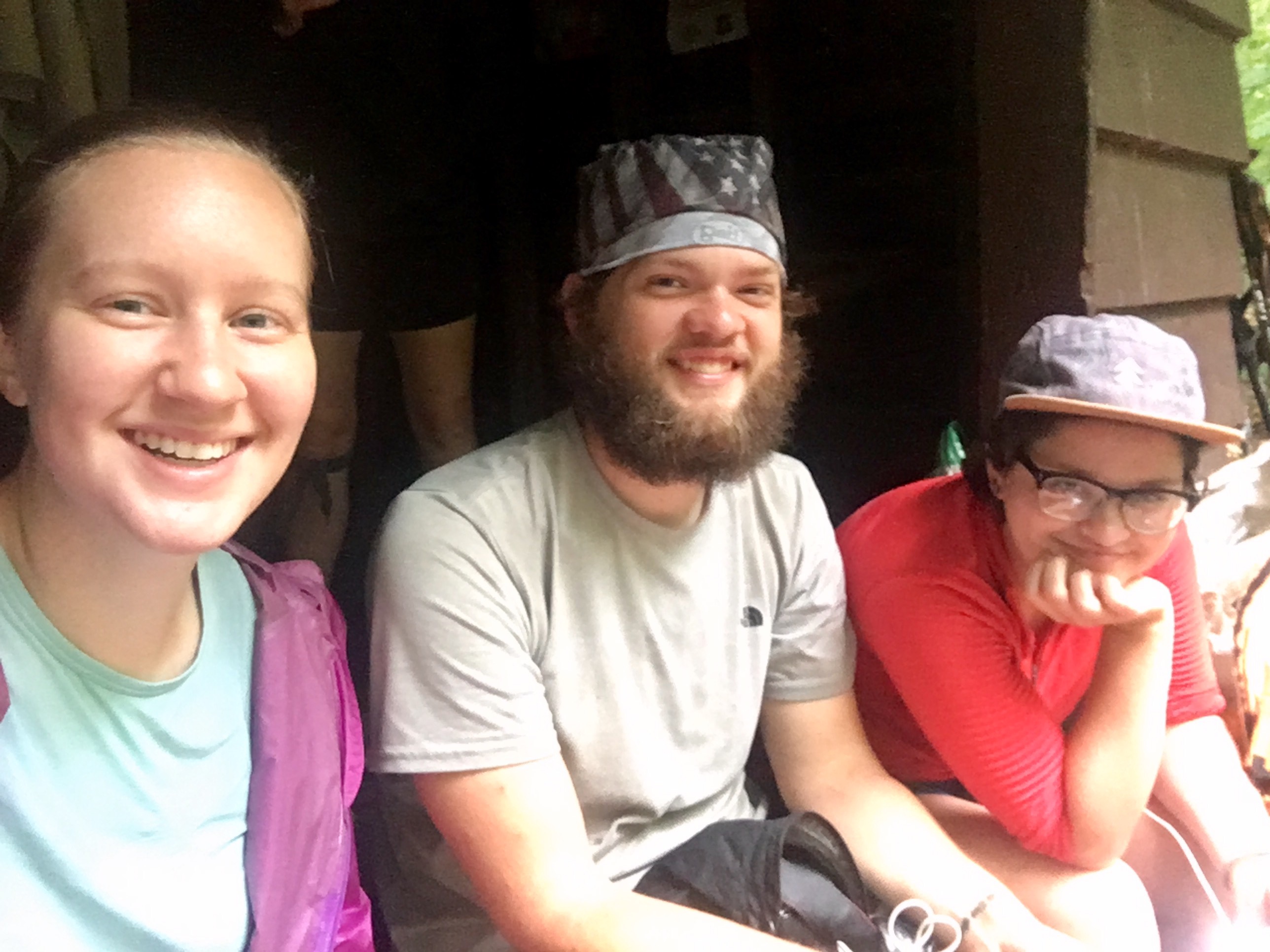 The trail was muddy, but nothing we couldn’t handle. Most of the mud was shallow and a lot of it was walkable. After the morning rain, the weather cleared out substantially, and the sun was shining. It was hot and muggy as I crossed over swamps and around lakes. I stopped on a log to eat a packaged apple pie, and got attacked by mosquitoes. I didn’t put on Deet this morning because it was calling for rain and we were doing a short day, but I was regretting it. 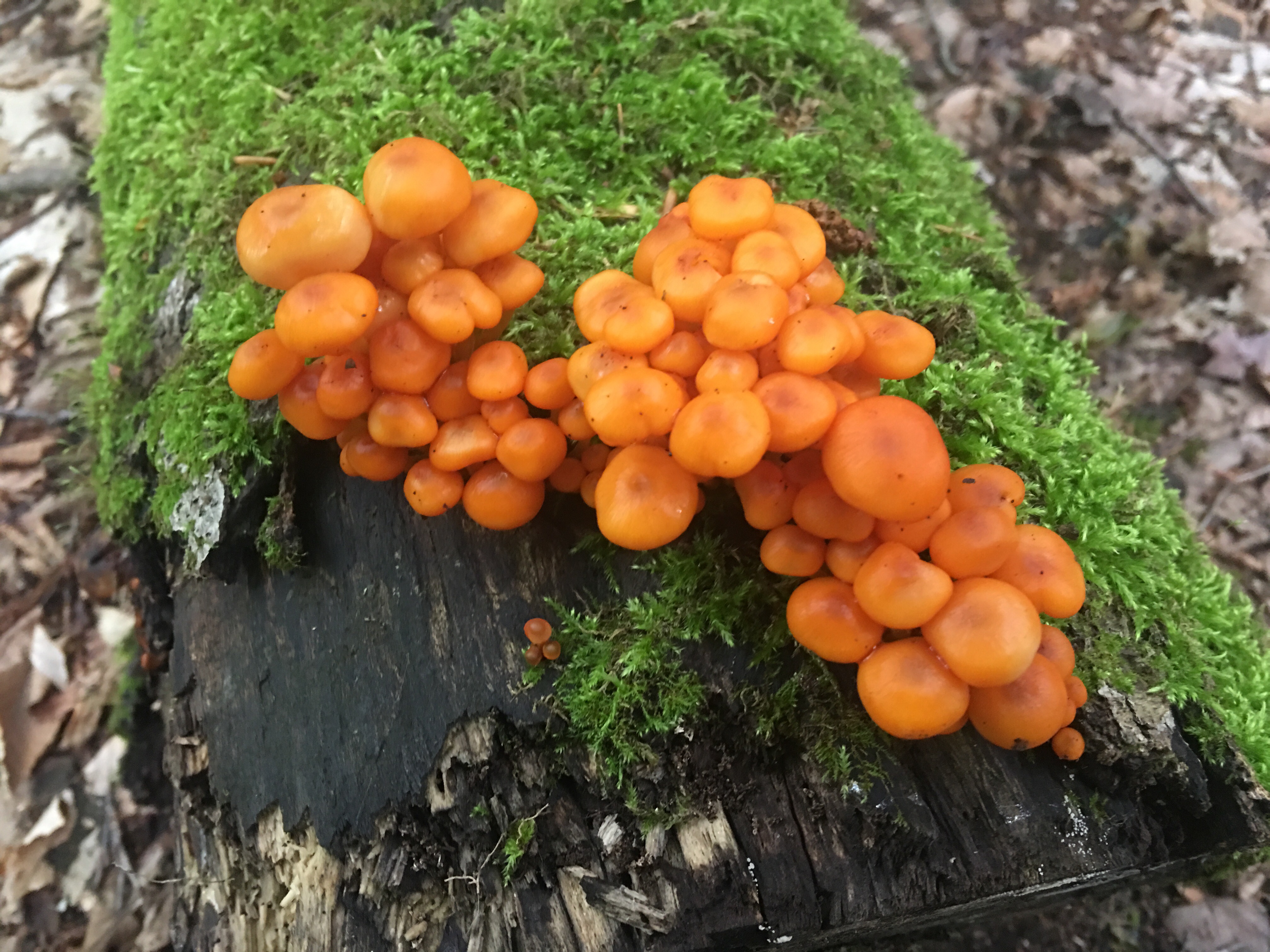 I hiked on a few miles to the shelter that was right on trail, and found Sweetspot, Geiser, and Birks. I used the privy and hung out until Rash and Piñata showed up. Our plans were to hurry into town and spend the maximum amount of time in the hotel, but sitting in the shelter enjoying the sun and talking to Birks was relaxing. We stayed for around 45 minutes before we hiked out.

The rest of the hike was enjoyable, despite the mud and wet trees. The scenery in Vermont is beautiful, with lots of areas full of evergreens and the trail is soft with pine needles. I called Louis and the time passed quickly talking to him. The descent into the town was rocky and very steep. It was mostly descending crude rocky stairs, but the rocks were slick with the rain and made the ordeal painful. My knees were aching, and I was glad to get to the bottom. 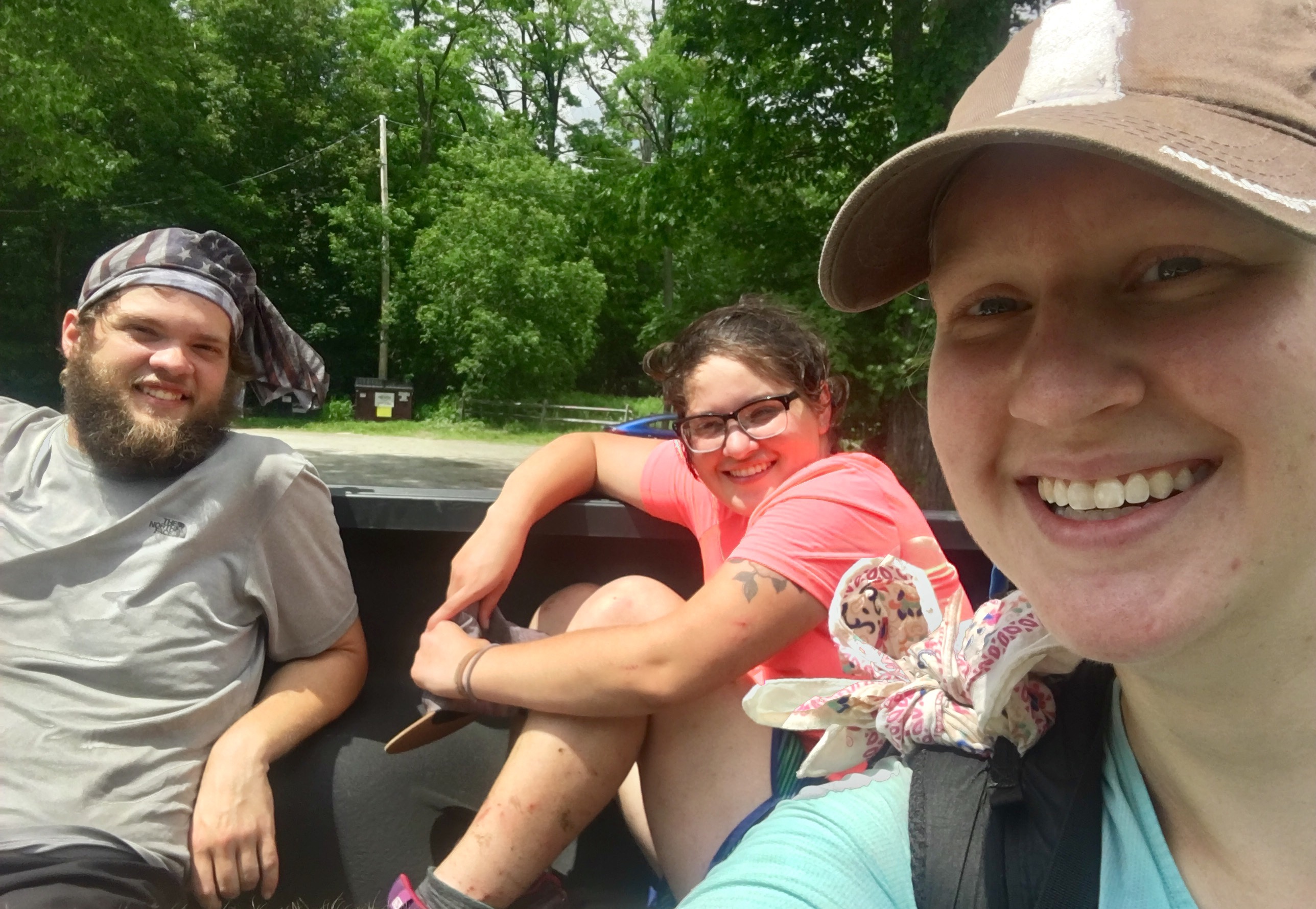 Hitchhiking in the back of the pickup

Rash and Piñata weren’t far behind, and we got to the road and hitched. A pickup stopped and took us the long drive into Walmart. It was sunny and hot, and the wind in the back of the pickup felt great. Shopping in Walmart after living from expensive gas stations and small hiker stores was a huge relief. We got food to eat right away and food for later. Rash and I split a platter of fried chicken, which I’d been craving for a while. We unboxed most our snacks to make them easier to carry, and ventured outside in the blazing heat. Medicine Man passed us and said hello. He was staying in a hotel near Walmart. Ours was around 3 miles away, so we walked on the blazing hot blacktop to the road to hitch. 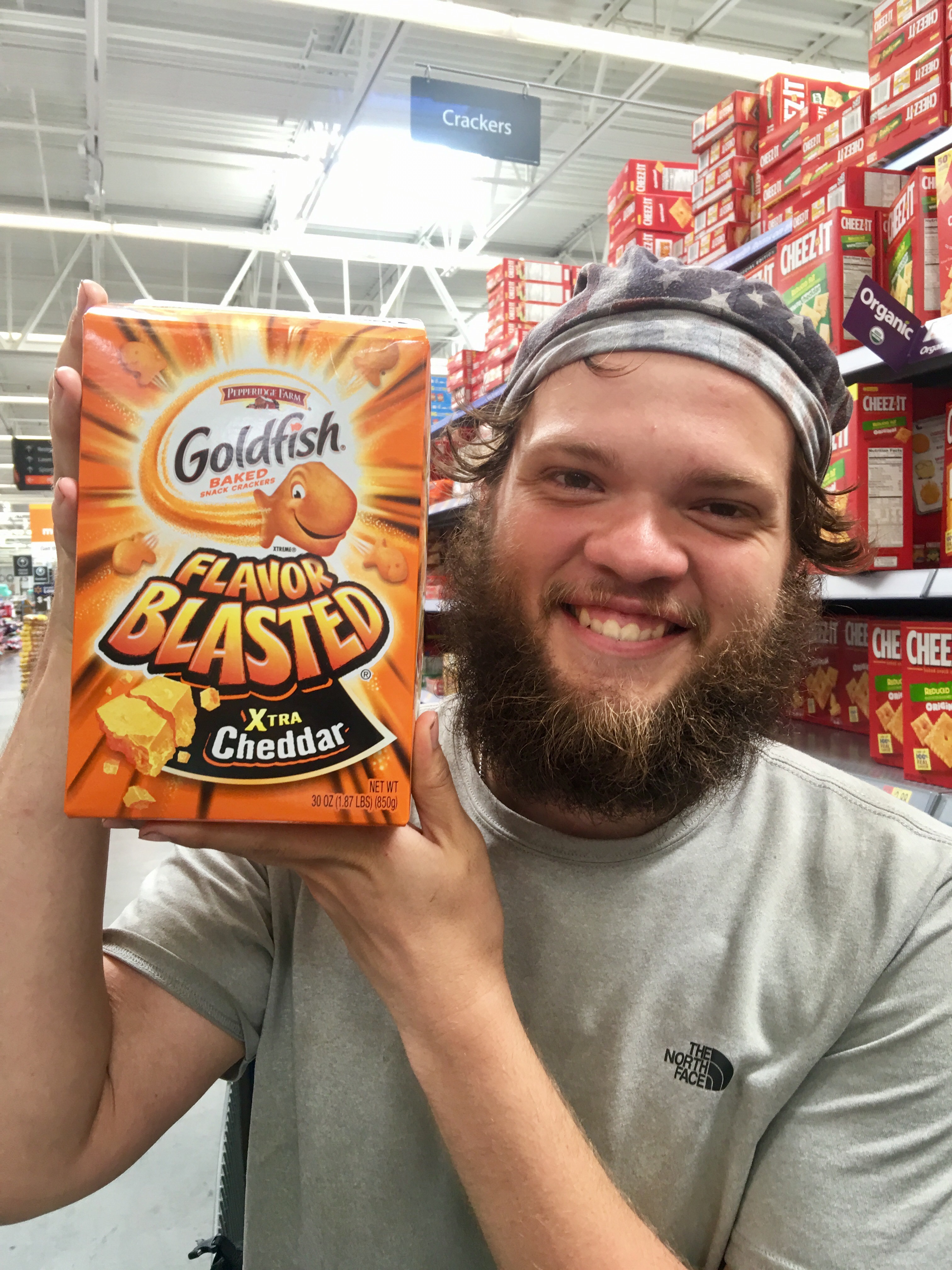 Rash with a huge container of goldfish crackers 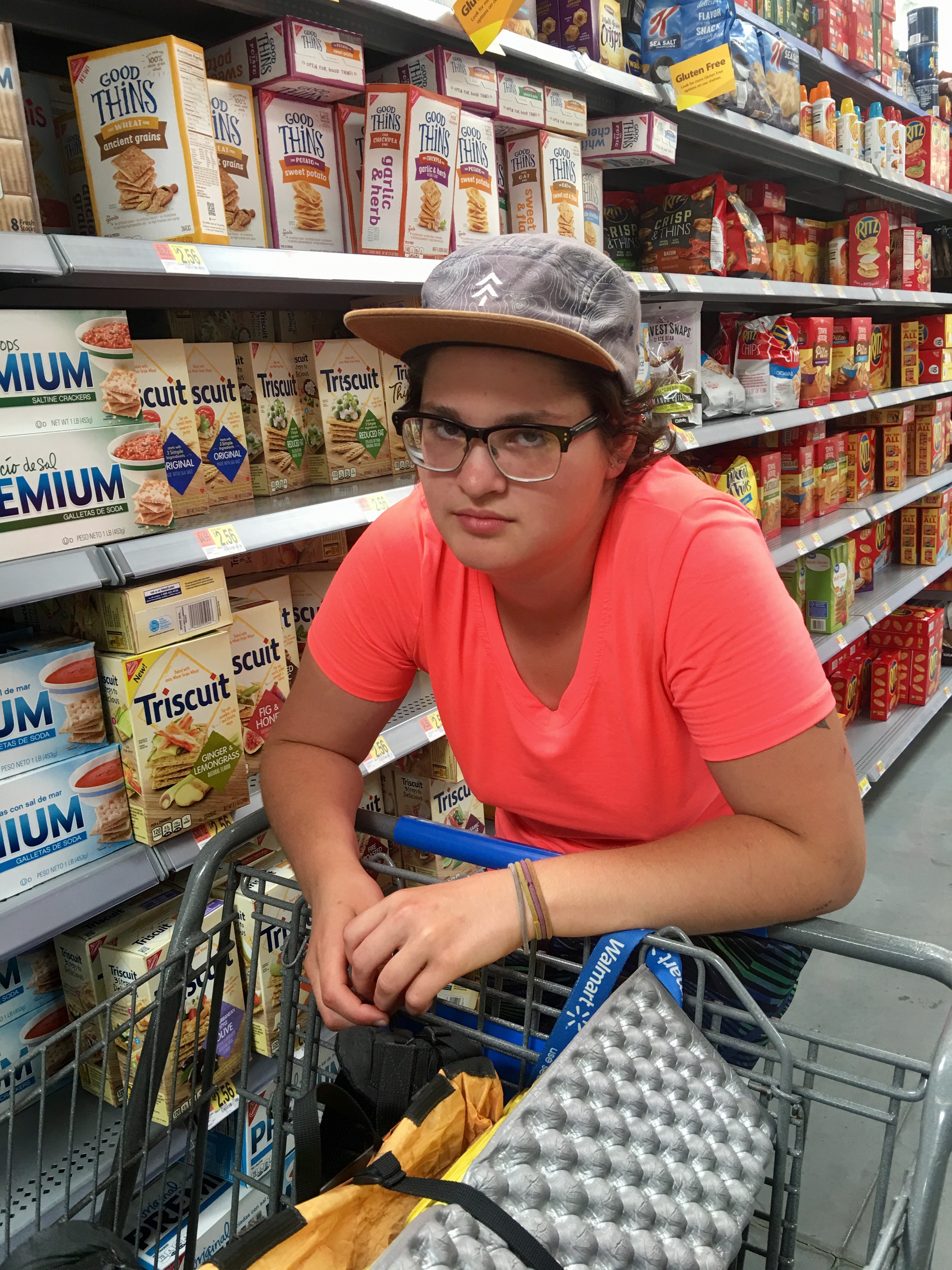 We weren’t hitching for very long before we got picked up, but in the heat it felt like we were out there forever. A girl our age in an SUV stopped and picked us up. We talked about the moose and catamount (which is apparently a northern term for mountain lion) statues around town. They are painted and reminded me of the pigs in Smithfield and mermaids in Norfolk. She said businesses bought them for 5k and the proceeds went to charity.

We checked into the hotel, and I pet the adorable pug at the front desk while the manager checked on our room. We showered and lounged in the AC that was taking a while to cool our room. We ate the food we got and watched TV the rest of the evening.

We had discussed taking a zero today if the weather still looked bad when we woke up. We checked the radar when we got up, and it still looked ominous. It was cloudy in the morning but not raining. We decided to play it safe and take the day off since we had a zero built into the schedule. As we were in the hotel office renewing our room another night, it started down pouring. Needless to say, we were happy with our decision. 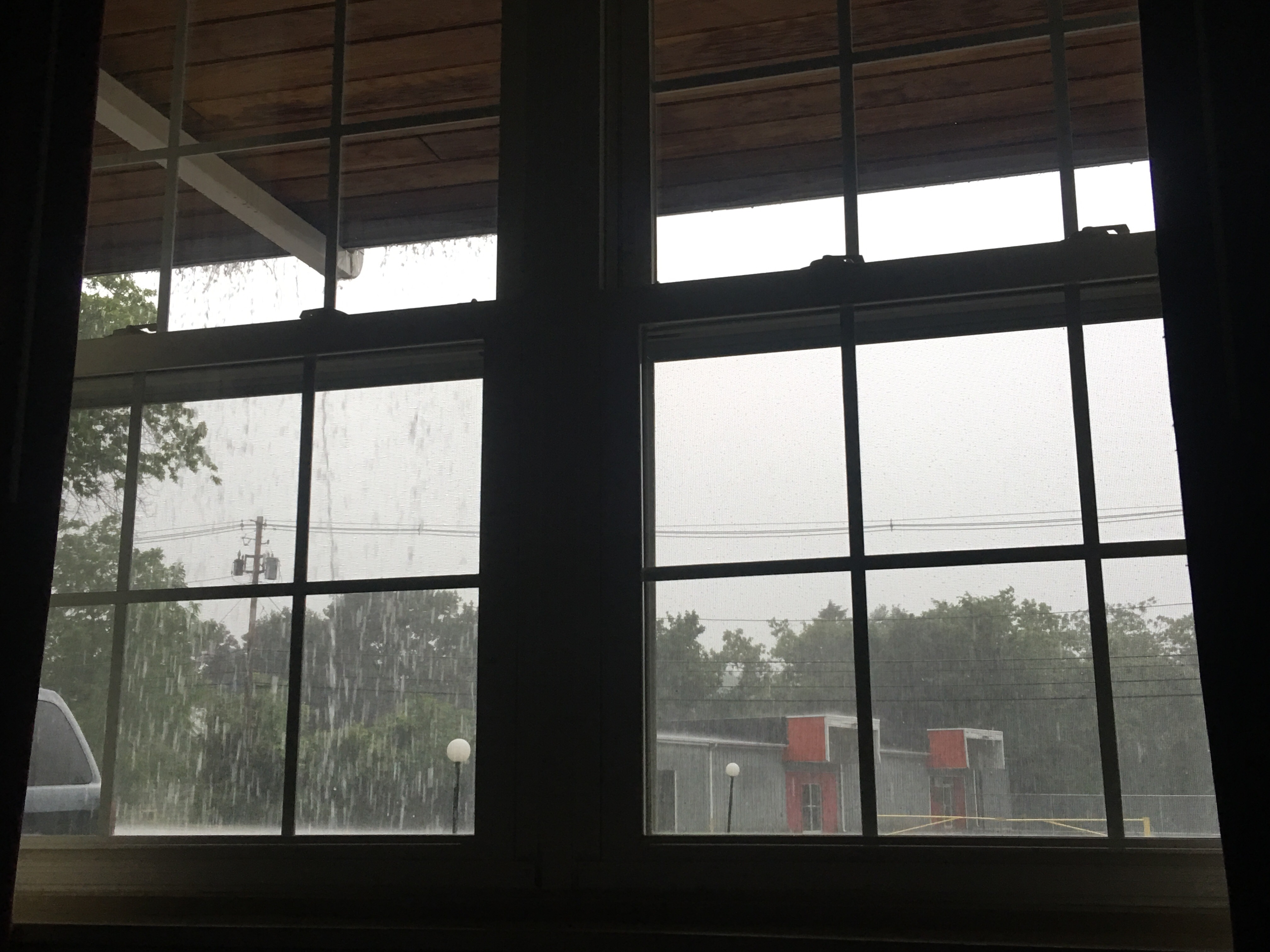 The rain coming down

We watched the rain come down in sheets for most of the morning, and then the sun made an appearance. We walked next door to the gas station and bought ice cream while there was a break in the rain. I also got a decongestant since I was still stuffy from my cold. When we got back to the hotel, the rain returned in full force. We spent the rest of the day watching TV, napping, and eating snacks. We watched our standard collection of Family Feud, American Pickers, Shark Tank, and Bob’s Burgers. 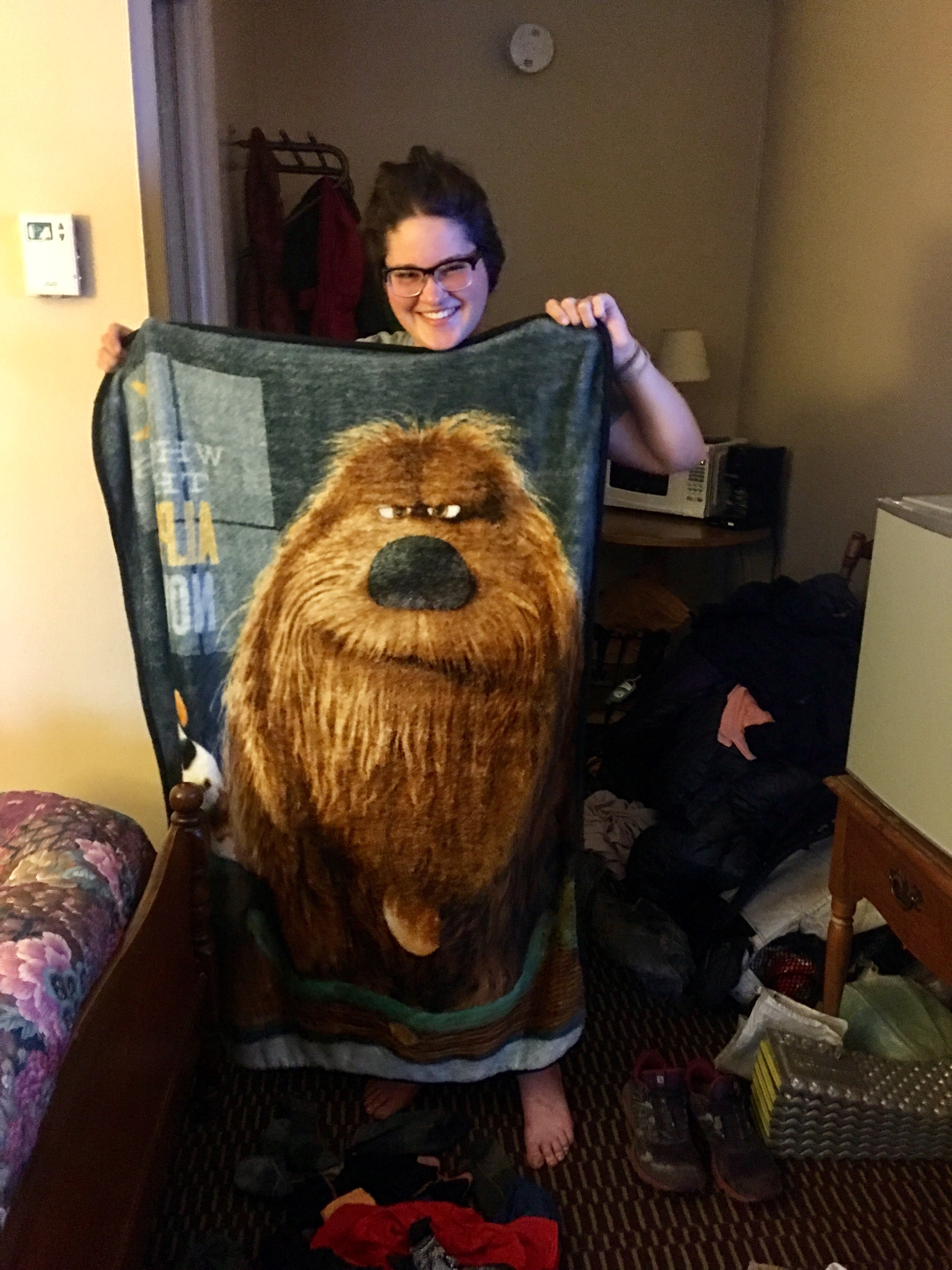 Piñata with her famous dog fleece