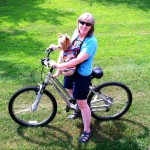 We’re Ready For Our Hike Now

I’m sitting in the theater waiting for the movie “A Walk in the Woods” to start. I read the book a couple of years ago and found it very entertaining. After seeing the movie trailer I wondered how close to the book the actual movie would be. The trailer was exciting but I didn’t recognize many true to book adaptations. There were some familiar scenes like the “to scale” map upset and the outfitters store enlightenment. So, here I am with my hiking partner waiting to find out. I’m mainly worried about the impact the movie may have on the Appalachian Trail. If there is one, I hope it’ll be on the good side. Who knows it might even help with pre hike preparation. I’ll forgo any further information about the movie, wouldn’t want to be a spoiler. 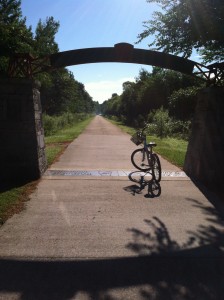 Larry and I have been working diligently at getting in shape by bicycling and dieting to prepare for our hike. When Larry lost 30 pounds we celebrated until it became obvious he could no longer put off a long needed hernia surgery. The loss of weight both a great thing and then again not so much accentuated his problem. Surgery complete he has been on the mend since I first posted our intention to thru hike the A. T. A good thing I think, better now than a medical emergency on the trail. He’s doing well, so this is just another way to prepare for the journey (get as healthy and fit as possible before you go). 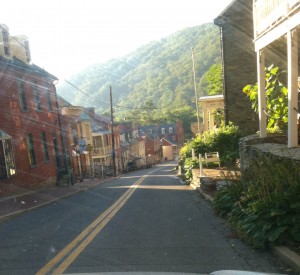 We’ve used the convalescent time to travel to Harpers Ferry, West Virginia and talk with the wonderful people at the Appalachian Trail Conservancy in person. We’re now set to take part in The 2016 Flip Flop Kick Off.  A flip flop is a thru hike starting in the middle and going north to Katahdin then returning to the middle and finishing at Springer going south. This was the decision we were struggling with. Traditionally hikers begin at Springer Mountain in Georgia and end 2,189 miles later at Katahdin in Maine. It just seemed immoral not to end the journey by climbing to the climatic top of Katahdin with its famous weather and hiker worn sign. 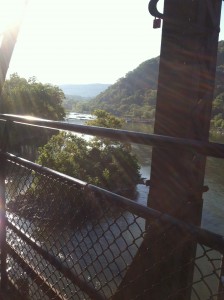 Thanks to information from the good people at the Appalachian Trail Conservancy there are several reasons we chose to flip-flop the Appalachian Trail. The movie “A Walk in the Woods” may cause a large jump in the number of hikers on the A. T. Large amounts of hikers will put a strain on trail resources. The best way to lessen the strain of resources is to spread out the hikers, thus the flip flop. The most important reason for our choice is the number of hikers starting the trail at Springer. The second reason is the ability to start after the coldest weather has hopefully past. Lastly, the luxury of not having to worry about meeting a deadline to be at Katahdin before Baxter State Park closes on October 15th. 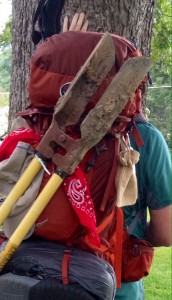 In recent years the traffic has increased to the point that there is a shortage of shelters when a large people bubble moves through the trail at the same time. Where there are people there is poop (a lot of poop). Many unprepared hikers don’t understand the need for LNT (leave no trace) and do not poop properly in the woods. YES, there is a proper way to poop in the woods! I myself have witnessed toilet paper and who knows what underneath it covering areas of the trail. BIG NO NO. To poop in the woods get off the trail and away from water sources (200ft). Dig a 6-8 inch cat hole for your poop, cover when finished and leave a stick sticking up from the hole to mark it. Bury your toilet paper with it or pack it out. In other words leave no trace. With a flip-flop there is less people so less poop and more room in the shelters. 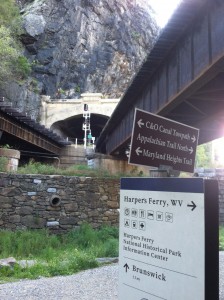 When you start in the middle of the trail you can wait to start until the beginning of May. This timing puts the coldest weather behind you. In May it is less likely, not saying it can’t happen but your chances are better to have weather that’s a little more cooperative.  Hikers starting at Springer will have to begin late February or early March to reach Katahdin before the October 15th closing of Baxter State Park. Stuff happens on the trail rushing thru may cause hikers to become careless. Trying to finish instead of enjoying the journey is not why I want to hike. I want the whole experience. 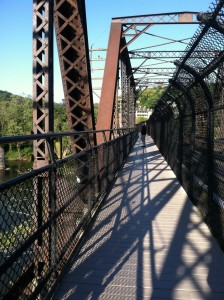 A flip flop is just what we need. Less people and poop, better weather, and best of all, time to enjoy the journey.
Hmmm…. Now the logistics ..?
Next research project.

Hi, my name is Brenda Whaley. I'm a 60 year old mother, grandmother, retired teacher, dog lover, bike rider and thru-hiker wannabe! Happily retired and living an active life, Larry my husband of 43 years, and I were looking for a little more action than breaking in the porch rockers. What could be more in tune with that idea than hiking 2,189.2 miles on the Appalachian Trail? We moved to Piedmont, Alabama next to the Chief Ladiga Bike Trail where we ride our bikes on an average of 100 miles a week. We found that The Pinhoti Hiking Trail connects with the bike trail. Having hiked the AT approach trail to Springer Mountain in Georgia our interest was peaked, so to speak. We will begin our flip/flop thru-hike adventure April 2016.