Today was hard on the knees. Literally. Uphill and downhill. But now I’m sitting by Speck Pond, watching the fish jump and admiring the view before we tackle the Notch tomorrow.

We left Frye Notch campsite early and headed over the Baldpates. I guess we got there too early because it’s been a beautiful day since, but as we were summiting the Baldpates it was extremely windy and foggy. Similar conditions as to when we hiked Katahdin. Arry did very well; she seemed to recognize she needed to stay closer to me in those conditions which was comforting. 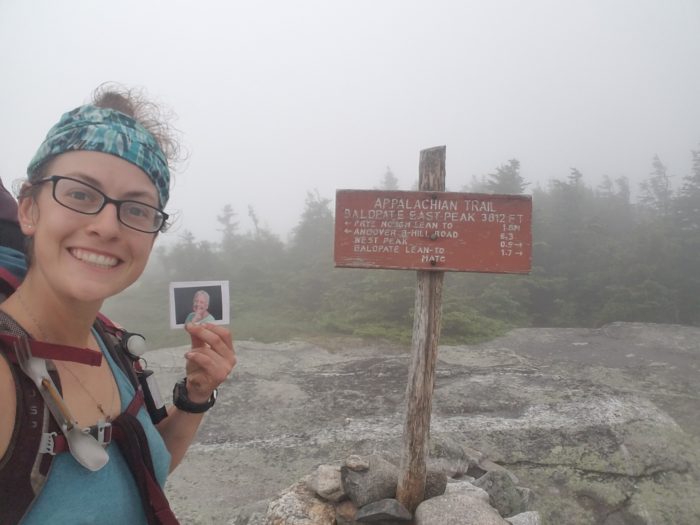 Then it was a long downhill to ME26. As we were descending we ran into a lot of day hikers. I guess Grafton Notch is a state park where you drive through, and can park and hike trails off the main road, kind of like Acadia National Park was.

We kept passing and then getting passed by Ragdoll and Molasses. It was nice to see more familiar faces! 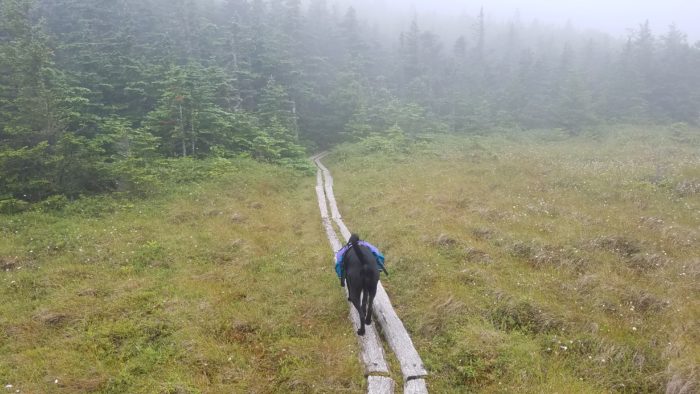 Mentally, I was thinking about six more days. We have six nights until we meet up with my boyfriend to do the Presidentials in the White Mountains. Part of me wanted to last minute ask for a ride out of Grafton Notch. But the opportunity came and went and we kept walking. Six days. I keep feeling like I’m going to cry out of excitement.

After we crossed ME26, it was a long four-mile uphill climb to the summit of Old Speck Mountain. Did I say long? It took us way longer than I expected to reach the summit, but we made it! Four miles of continuous uphill is not the hardest, but is extremely grueling, especially on the body. My knees especially feel the miles today. 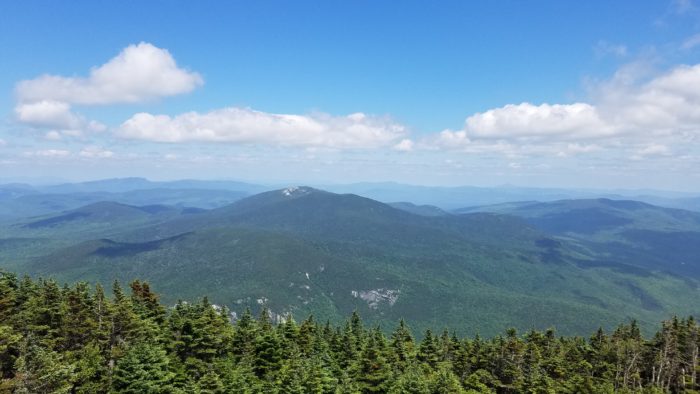 The view from the fire tower on Old Speck.

At the summit we ran into Ragdoll and Molasses again! They’ve hiked these parts of Maine many, many times, leading rich people camps, but never thru-hiked.

There was a fire tower I climbed and got a full 360-degree view! I even saw the Baldpate we walked over this morning!

The climb down to Speck Pond campsite was also tougher than I expected. It was a lot of climbing down, and 1.1 miles took us about an hour as we slowly picked our way down.

This is one of the AMC run campgrounds where they have a caretaker living full time. You also have to pay to stay to help offset the maintenance costs. They say it costs $12 a night per person, but they only charge $10 a night.  AMC offers a deal, where if you’re thru-hiking you get a card that comes with a bunch of perks you can redeem later. 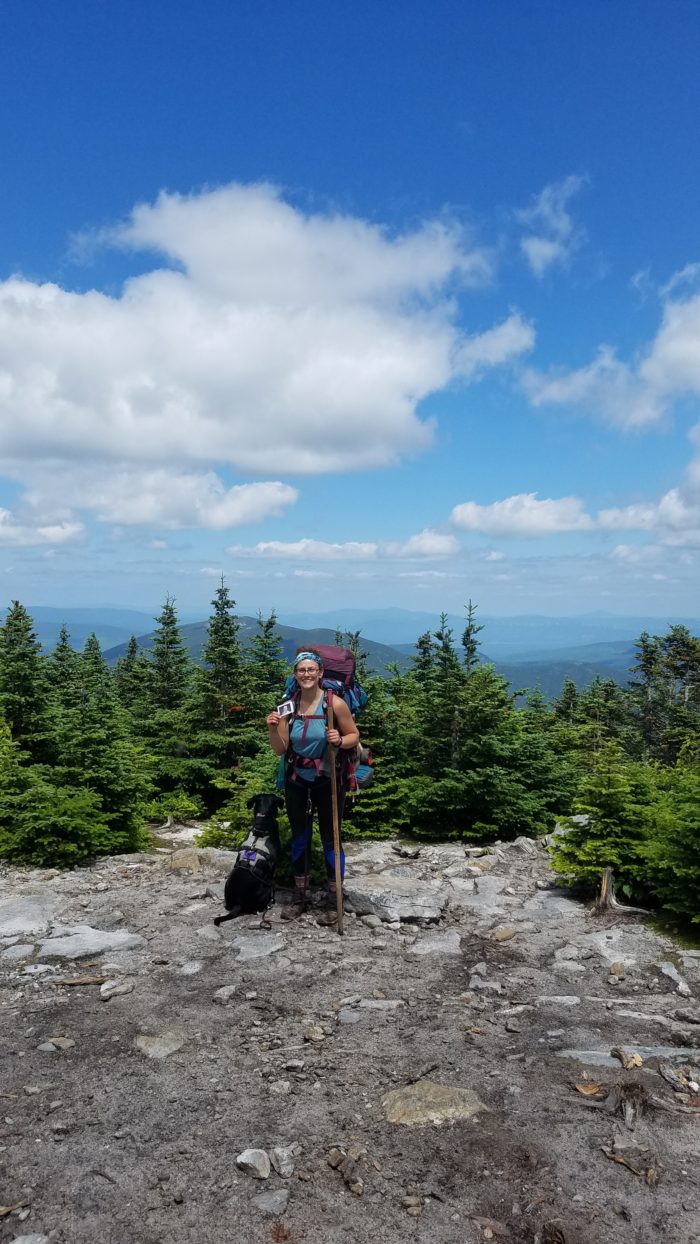 The hikers I asked to take our picture here on the summit of Old Speck thought it was awesome I was bringing my grandma with me on my hike!

The amazing part about the trail is there are many, many people that can’t take six months off to hike. Or can’t hike for six months straight, but this trail is for them too. A lot of the more popular areas have fees, which while I would rather not pay them, I recognize all the time, effort, and hours put into maintaining the trail and understand we all need to contribute. I don’t work on maintaining the trails, but I appreciate the efforts of those who have and do, and am supportive of that.

Tomorrow we hike the Notch. There are many notches we have passed, and many more that we will pass. So what makes Mahoosuc Notch special? It’s a giant boulder field, dubbed either the hardest or most fun mile of the AT, depending on how you felt during it.

I’ve grown to dislike all notches. They are simply steep downhills and then steep uphills and I’m over them at this point. 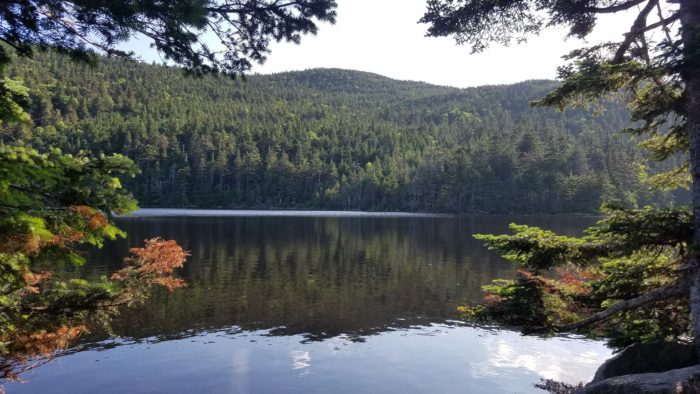 Speck Pond. So tranquil and beautiful.

Mahoosuc Notch is one of the things I have been most nervous about completing with Arry, and tomorrow is the big day.

I suppose that is one of the cool things about the AT. There are parts where the stories make you nervous: 100-Mile Wilderness, Katahdin, Mahoosuc Notch, the Whites, etc. But then you do them and overcome your hesitations.

A lot of times I think people project their fears into conditions of a hike. I remember hiking the Grand Canyon in January; I researched it and got nervous for winter weather. I had been hiking the Adirondacks in the winter recently and was used to mounds of snow, having to use crampons and snowshoes, and expected the same in the canyon. Boy was I silly.

And that same thought process happens when I hear “it’s really rocky” or “really steep.” I think of the worst I have ever encountered and immediately project that onto what I expect to encounter, and usually I am left wanting.

As I admire this pond I can’t help but think it would be so beautiful in the fall, with all the trees surrounding the pond in autumn colors.  It’s a nice distraction from the ache in my knees. I didn’t realize my body was getting this old.

Short miles, but a long day of hiking.

Uncle Sauce and Cranberry showed up at the campsite late last night.  I started this morning by reading all the comments on Guthook about Mahoosuc Notch and started getting nervous because it poured last night and was projected to storm this afternoon.  I was terrified about the slick conditions.  One comment in particular got to me. It read: take a buddy or two even if just temporary. 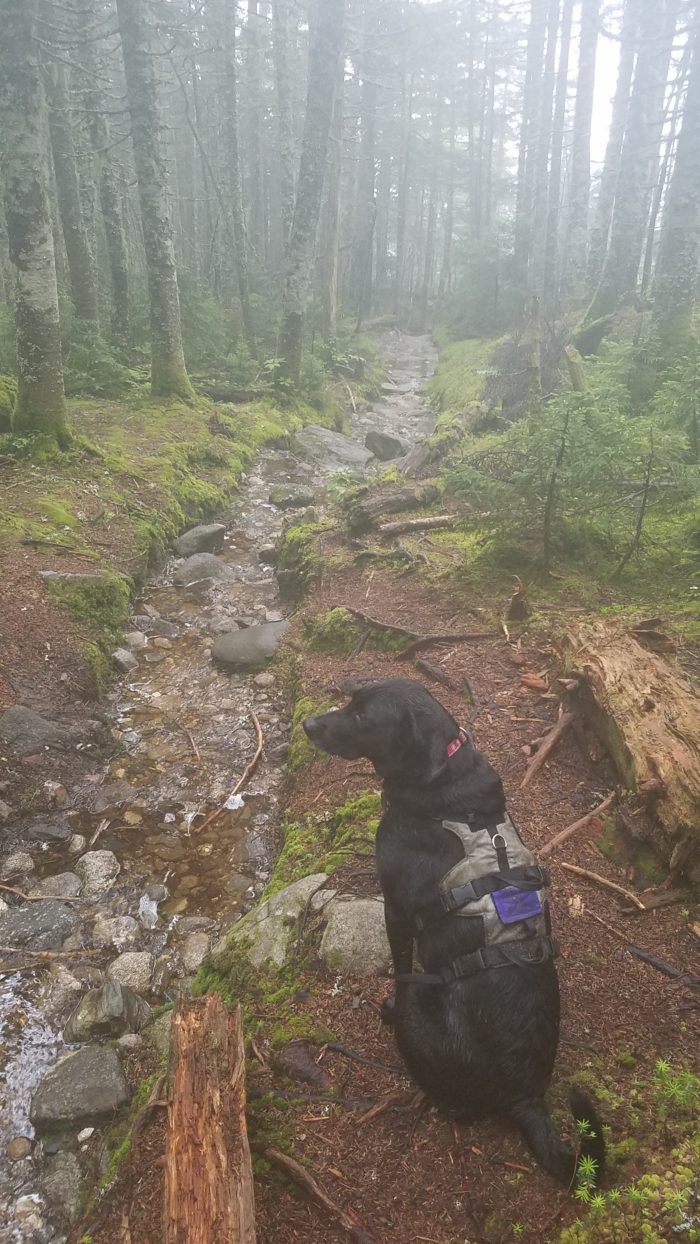 So I woke up Uncle Sauce and asked if we could hike the Notch together. And we waited for them, but I’m so glad we were a little tramily today.

Probably not even a half mile into our hike to the Notch we came across a mud pit. Arry stepped onto it thinking it was solid and she just sank deep into the mud, all the way up to her chest. She just calmly swam through it. Cranberry pulled her out, and I tried to wipe her off with my towel. She was filthy. And not happy about it at all.

The first part of the day we hiked Mahoosuc Arm. Which was a steep, slick downhill. At one point Arry went sliding down a slick rock and I felt my heart skip a few beats. 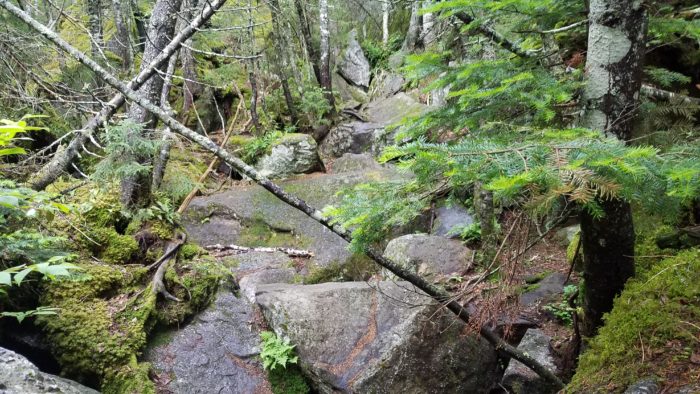 At the bottom of the Arm we began the climb up Mahoosuc Notch, commonly referred to as the Notch and known as the hardest mile on the trail. It was basically a choose-your-own-adventure climb over and under boulders, made a bit more difficult because of the slick conditions.

It reminded me of climbing around at Panama Rocks with my family. Except it was much longer and more dangerous. And at the end I was emotionally spent. 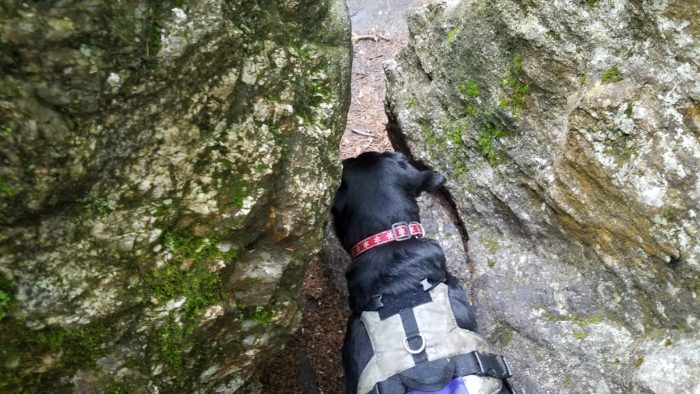 Arry finding her own path.

Hiking with Uncle Sauce and Cranberry was a lifesaver. Arry did very well, and seemed to thoroughly enjoy leaping from boulder to boulder, but there were times it was really nice to have help guiding her.

One time Arry’s foot went down a hole.  She is very good about calmly waiting when she is stuck, which was perfect because all I could see was her breaking her leg. But she sank down and Uncle Sauce and I were able to pull her out and continue on.

Another time she decided to run down a slick boulder and I had to catch her like a football. 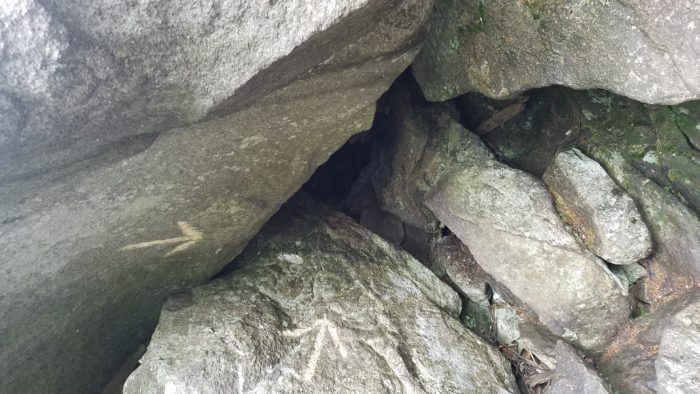 If that wasn’t enough to take years off your life, she leaped across an an opening and didn’t quite make it. Her front paws made it, but she didn’t have quite enough strength left to do a pull-up onto the rock. In about .01 seconds it seemed like I watched my dog just fall down a canyon. I shrieked, Uncle Sauce, Cranberry, and I all rushed to grab her. I had a hand on her harness and pulled her up. My heart was going a mile a minute, my adrenaline was rushing. I held Arry close to me and sat for about ten minutes until I calmed down.

We came to a spring and sillily thought we were done. As we were about to sit down for lunch we realized we had .3 miles to go.

Near the end I could tell Arry was getting tired, and I was getting emotionally strained. It was a team effort by Uncle Sauce, Cranberry, and me to find the best routes for Arry, despite the fact that sometimes she would stubbornly not listen and find her own route. 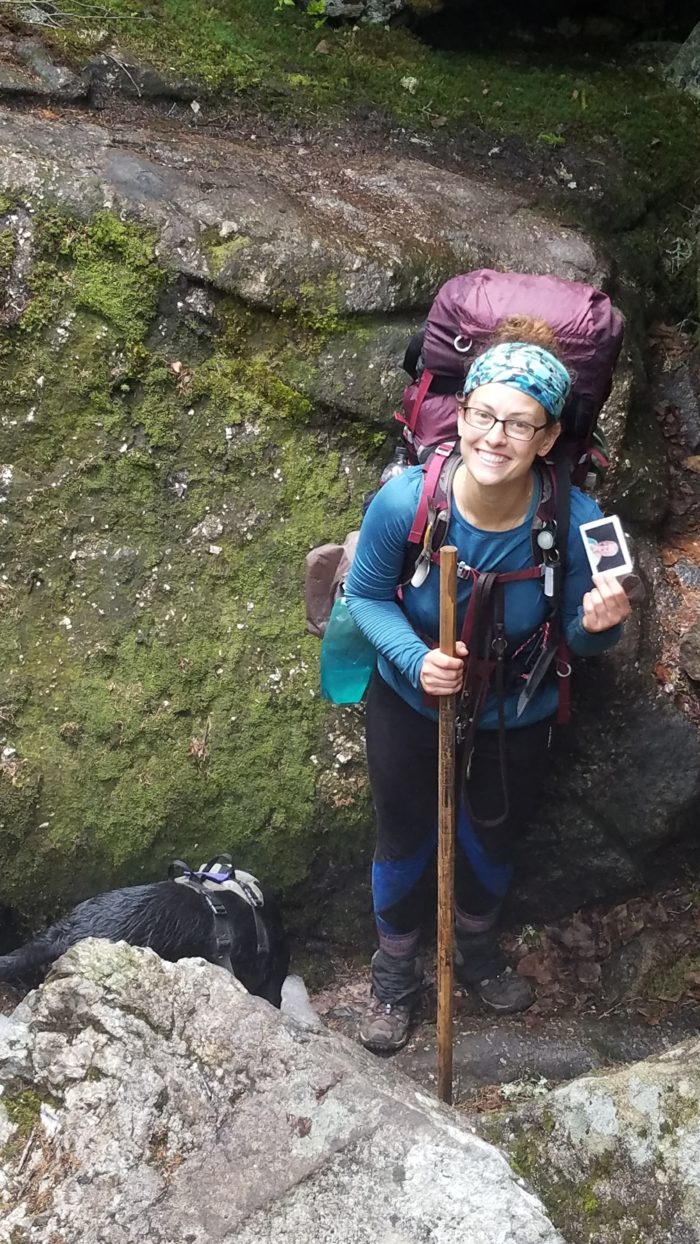 We made it through! All smiles!

After about two and half to threeish hours, we made it through the Notch successfully. All gear and people intact, and Arry’s tail was wagging.

We sat and ate a slow lunch together. I am forever grateful for the support from Uncle Sauce and Cranberry. It would have been extremely stressful trying to complete the Notch alone with Arry. The trail provides. 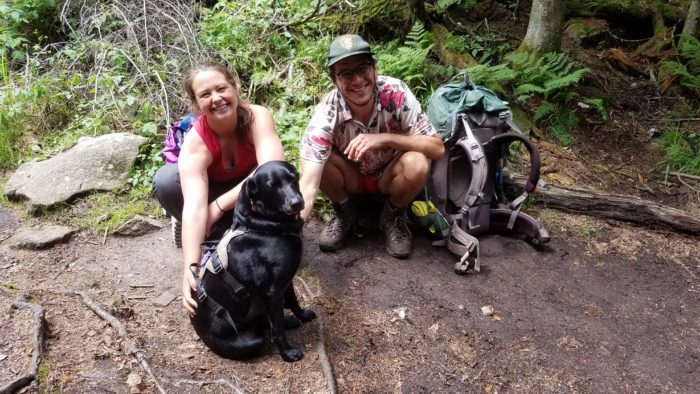 Uncle Sauce, Cranberry, and Arry after completing the most fun mile of the AT!

From there it was a slow, easyish mile up to the South Peak of Fulling Mill Mountain. We paused to enjoy a beautiful view, thankful the weather had decided not to storm today.

When we arrived at Full Goose Campsite it was midafternoon and I knew Arry was tuckered to the core. I couldn’t ask her to do any more. So we are staying here for the night.  She is tucked away on comfy things in the tent, getting some much-needed rest. 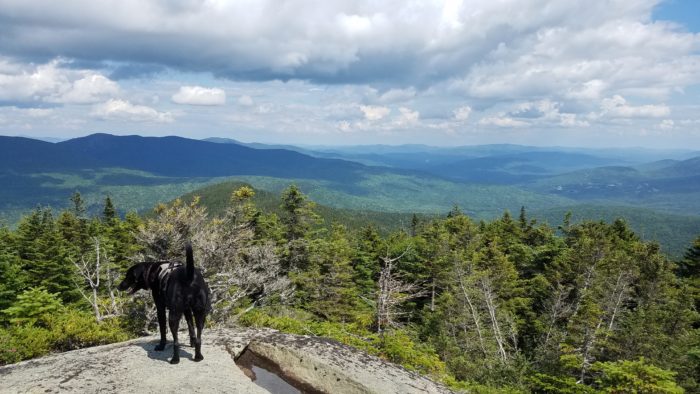 Arry is one capable dog. And despite the few moments when I rapidly aged today, she did very well through the Notch.  Could any dog make it through? No. It is extremely arduous with much leaping and clambering over rough terrain.

Today we hiked few miles, but we did one of the hardest miles of AT. It was one of the things I was most nervous to complete, and I’m so proud of both of us.