After taking some time off the trail for some much-needed rest and recovery, Arry and I were ready for more. I had an amazing time with my family on the lake. My cousins and I watched the sunrise every morning, and my grandma and I would sit and just drink coffee and chat.  It was the exact spot I needed to be for those days. 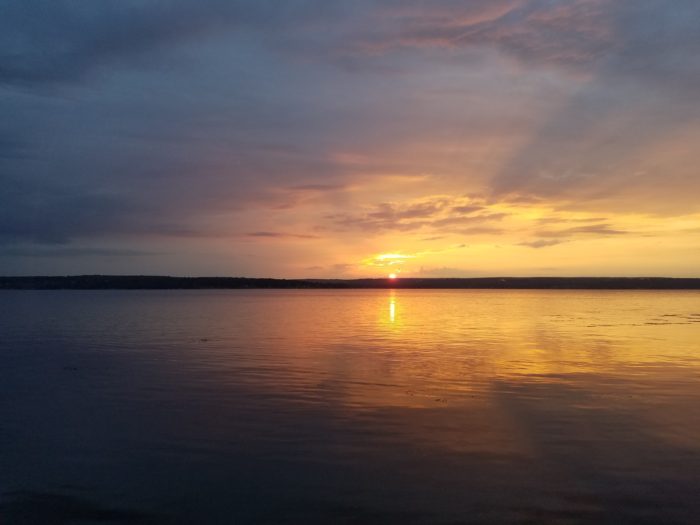 Gorgeous sunrise over the lake while on vacation with the family.

I could tell Arry was growing antsy. At first she would follow me around the house all day, never letting me stray more than a few feet from her. But after a while, after our morning walk and game of stick on the beach, she would run upstairs and lie on my bed without moving until my boyfriend returned from work.

As the day to return to the trail grew closer my sister and I planned and prepped resupply boxes. My boyfriend took some time off work to come the first two days with us. I also changed out some gear, buying new shoes and gaiters! Finally it was time to pack the car and head back to New Hampshire! 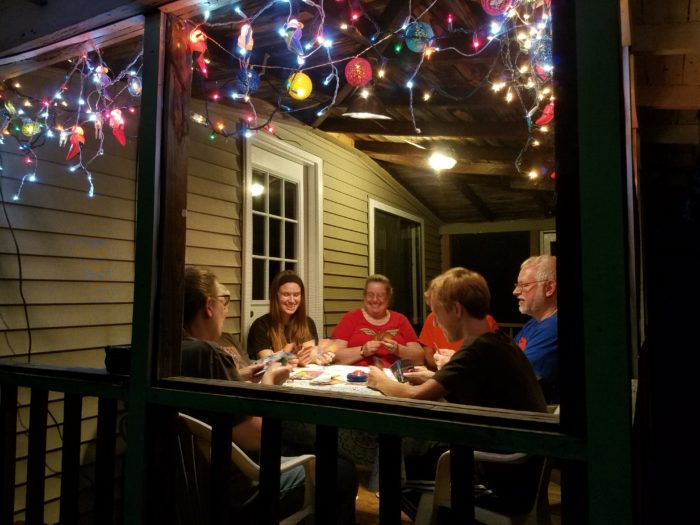 This is where I needed to be.

We arrived at the Town and Country Inn very late. As soon as we walked into the hotel room Arry knew something big was happening. She got the zoomies and sprinted in circles around the room, jumping from bed to bed.  I don’t think I realized until that moment just how good this trip would be for her.

The plan was to hike the 20ish miles I skipped over the Wildcats. This trip really solidified my decision to double zero in Gorham a few weeks ago. 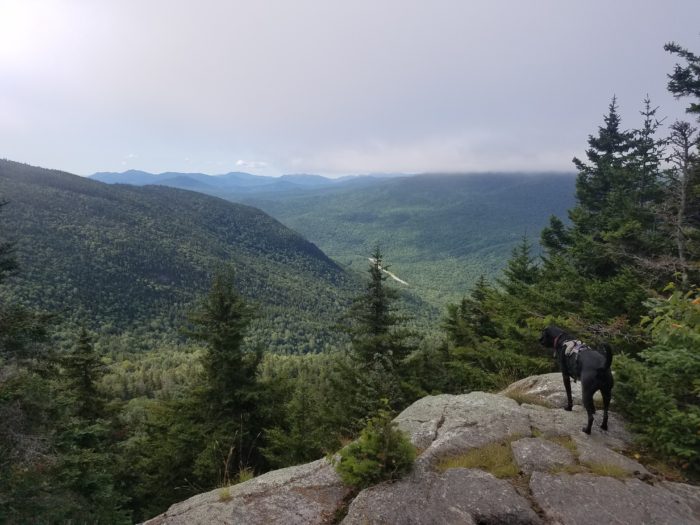 Arry, admiring the view during our ascent.

The climb up the Wildcats seemed endless. I had forgotten how rocky and rough the terrain out here was. We clambered up and over more rocks and I had to remind myself to be thankful we were climbing up this side of the mountain instead of down.

We met a young family, armed only with a Gatorade bottle and a fancy camera. The mother asked where the trail ended.

I blankly looked at her.

Jokingly I asked, “How’d you get up here? Helicopter in?”

To which they responded, “No, we took the gondola!” 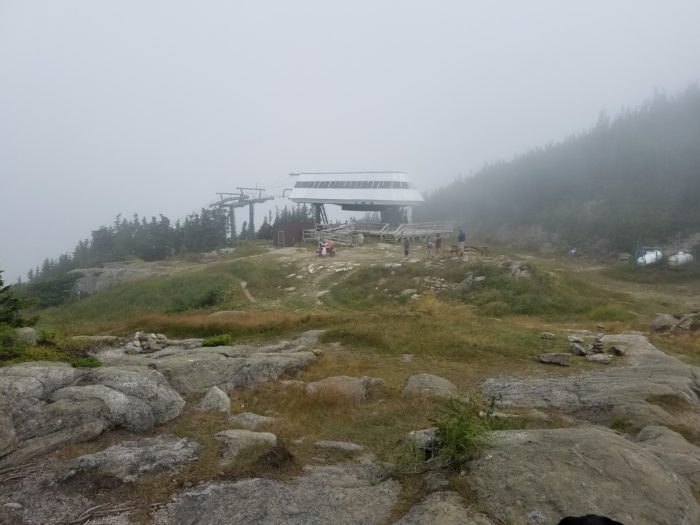 Gondola and beautiful view on the Wildcats.

Just past the family we saw the gondola bringing people to the top of Wildcat Mountain D. People in all sorts of attire lounged around the area. Some of the more ambitious ones were hiking small sections along the ridgeline.

I’ve heard the Wildcats have beautiful views. Alas, we could only enjoy the fog on this particular day. I do intend to come and ski these mountains, so maybe I’ll take the gondola this winter and be able to enjoy a breathtaking view! That’s my plan at least. 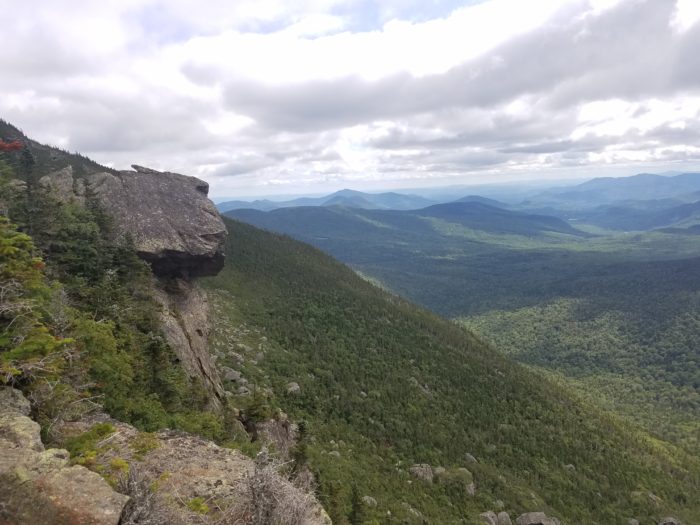 View as we climbed Carter Dome.

After a rocky descent down the Wildcats, we paused on our rocky ascent for lunch and view.

We kept seeing these blue berries, although they were not blueberries. They looked like little beads. I was nervous to try a random berry from the forest so I left them alone. Turns out they are clintonia and the berry is slightly toxic for human consumption. 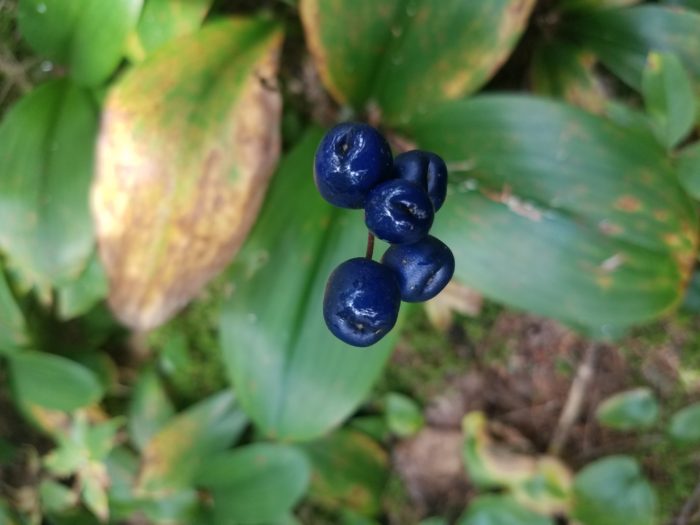 Eventually we reached the summit of Carter Dome. It was another great view in the clouds.

I do miss Maine. They marked every summit and view with helpful and friendly signs. Here in New Hampshire you just have to know you’ve reached the summit.

We had a view when we reached Mount Height! It was breathtaking, and worth the rock scrambling and climbing. We sat and admired the view from Mount Height for a while, trying to prolong more rocky walking.

After so many hard miles, I just wanted to drink in the beauty, but we had another five miles to our campsite for the night. 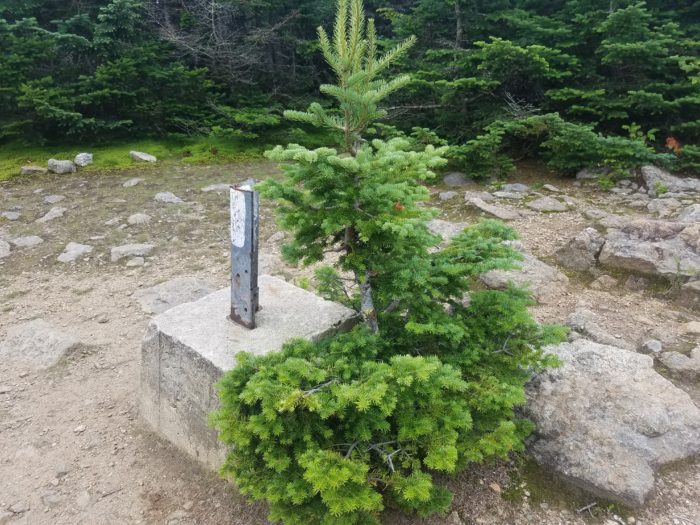 As we walked everything hurt. It hurt to put pressure on my feet and walk, and my feet hurt when I sat down to take a break. It hurt to go slow and it hurt to go fast. My sole motivation was that my feet might feel better once I could take my shoes off and prop them up for the night.

We arrived at Imp campsite very late. It got dark rapidly not long after we had our tent set up. What a big change from when we were hiking in Maine and I would fall asleep at 8 p.m. while the sun was still out!

As we hastened to complete nightly chores before it got too dark I opened up the bear can to prepare dinner. We forgot Arry’s kibble! 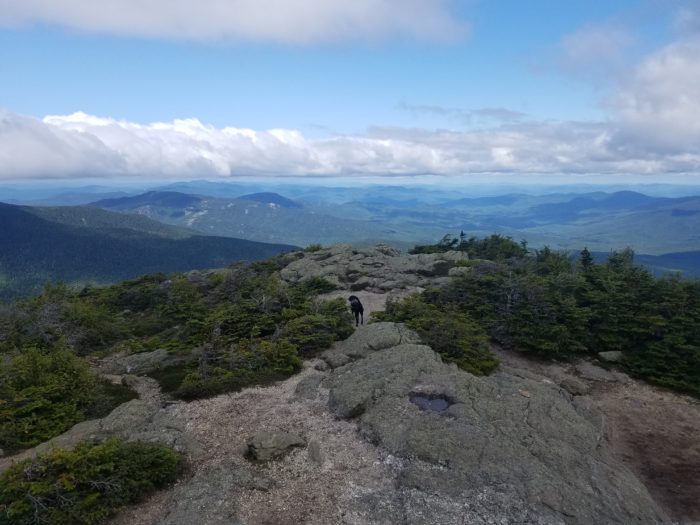 Breathtaking view from Mount Height. I guess the rock scrambles were worth it.

I felt like a huge dog mom failure at that moment. While we were only going to be camping this one night before I resupplied from the car, I berated myself internally for not double checking our provisions.

Arry happily ate peanut butter, tuna, tortillas, and extra beef sticks for dinner. It was like feeding a child ice cream for dinner. I don’t think she minded not having kibble for dinner tonight.

It was a chilly morning. After our long day yesterday we were slow to get moving. We were by far the last ones out of the campsite.

Our first, and really only uphill climb for the day, was Mount Moriah.  We didn’t actually summit Mount Moriah. The AT takes you .1 miles away from the summit. There were a few packs at the cutoff trail up to the summit; it looked like a group had dropped packs and scrambled to the top.

After all the rock scrambling yesterday, we decided to pass. It isn’t a 4,000-footer anyway, or so we thought. 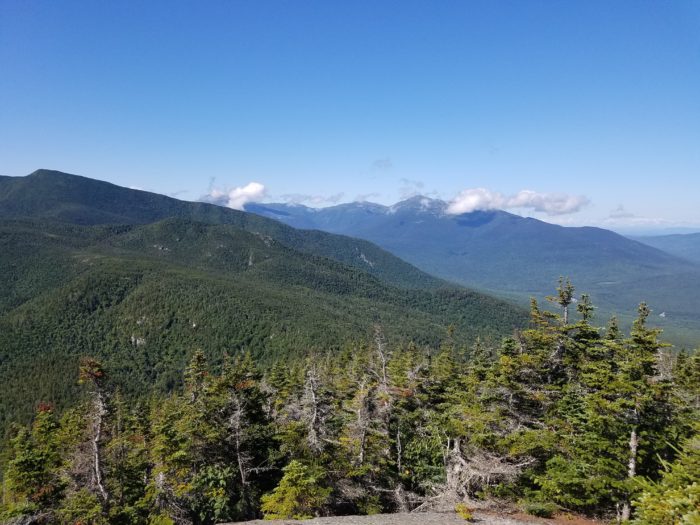 The trail was rocky in parts, but in general it was a very easy downhill to where we parked our car. Well, very easy considering the strenuous climb we had completed yesterday.  My body was definitely thankful for the break.

We stopped for lunch on a log just before the Rattle River Shelter. As we munched our trail mix and fed Arry peanuts and beef sticks, a girl ran by.

She paused and asked if we saw “A tall hiker in green shirt, probably going very fast.”

That’s actually a very good description of a lot of thru-hikers. 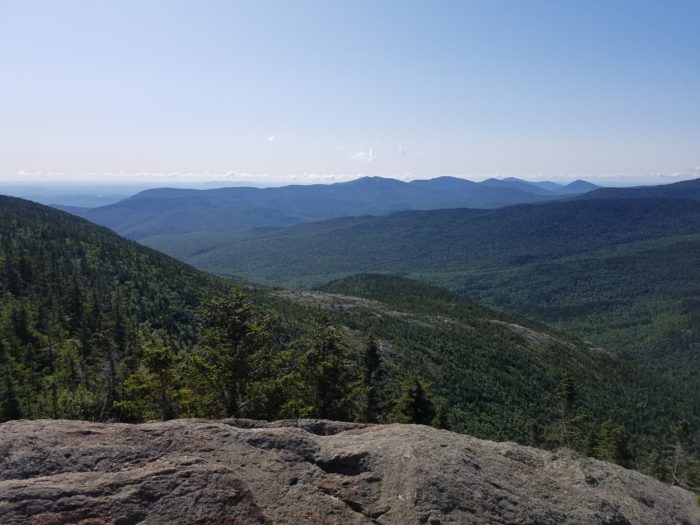 Views of the Presidentials from Mount Moriah!

We ended up seeing both her and her friend when we reached the trailhead! A thru-hiker from a few years ago was providing trail magic in the parking lot for NOBOs completing the Whites. While he grilled them burgers they petted Arry while I chatted for a few moments with them.

They are flip-flop hikers who started in Pennsylvania, headed north to Katahdin before they flip and finish their trip south. They said the rocks in Pennsylvania were pointy, but not anything worse than the Whites. 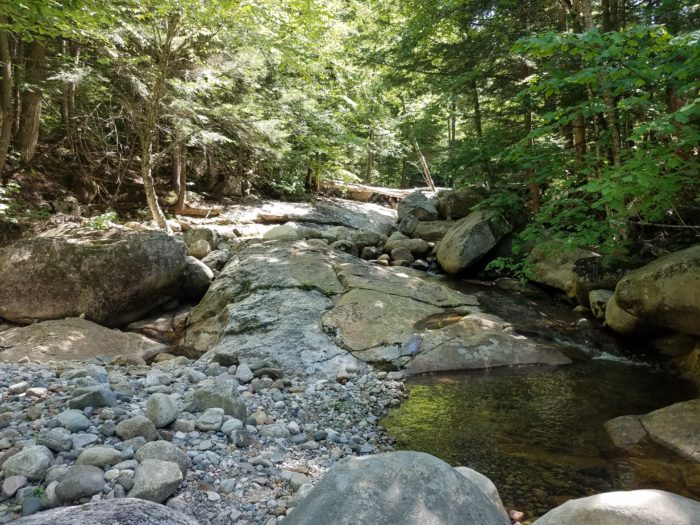 We arrived back at the inn just before 3 p.m. Usually I like to have everything planned out in advance, such as knowing where we are going to stay and how we are going to get there.

This time I was going with the flow. We parked at the inn to see if they had a room available. They had vacancies!

We spent that night playing Star Trek pinball in their arcade and eating surf and turf and filet mignon at the restaurant at the inn. A well-deserved celebration for successfully conquering the Wildcats! 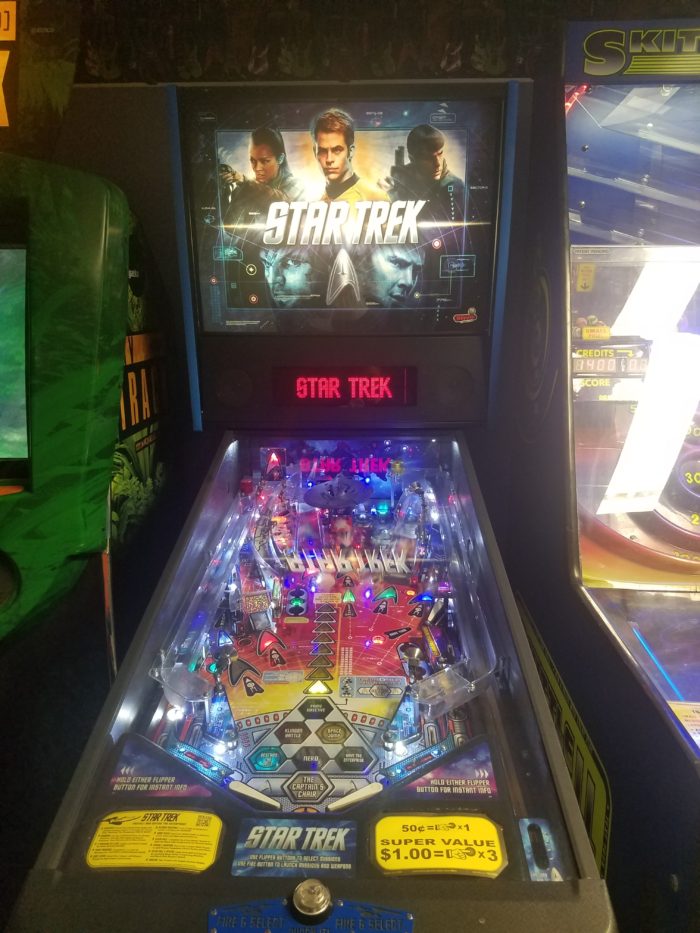 Star Trek pinball! Definitely entertained ourselves for a while.

My last chore for the night was to repack everything to set off again in the morning. This time just Arry and me. And this time with kibble for her.