We made it to Rainbow Springs Campsite. It is refreshing just sitting with my feet in the cold water. There are few mosquitoes and black flies here, but the normal flies seem mutant, and I worry they aren’t your typical houseflies.

We said goodbye to our Wadleigh Campsite early this morning. About ten minutes away I called my boyfriend for about 45 minutes as he prepared for work. Usually this would put me in a tizzy. You know, I have almost 12 miles to hike. Let’s go! But who knew if I would be able to chat at the next campsite (I cannot) and I’m learning there are plenty of hours in the day to accomplish what I need to. I’m slowly learning to relax and enjoy the journey. 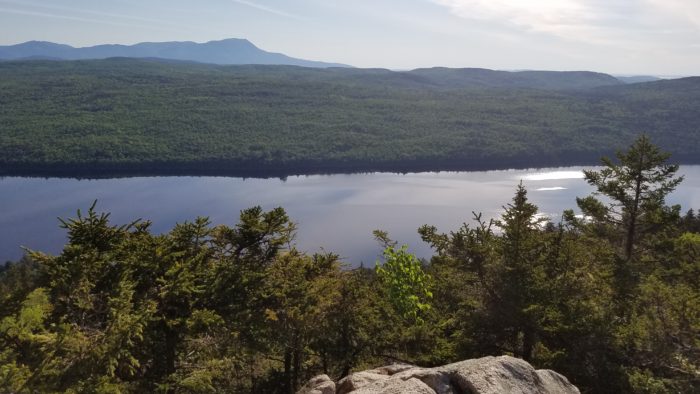 Then we were off. We climbed Mount Nahmakanta. On the elevation profile it looks small compared to what we have already climbed.  But my mantra: every mountain will take your breath away, there are no easy mountains.  And this one was true to the name “mountain”; it was tough in parts.

We met Jeanie at the Mount Nahmakanta Overlook. She is from Alaska, and said the sunset and sunrise was gorgeous. 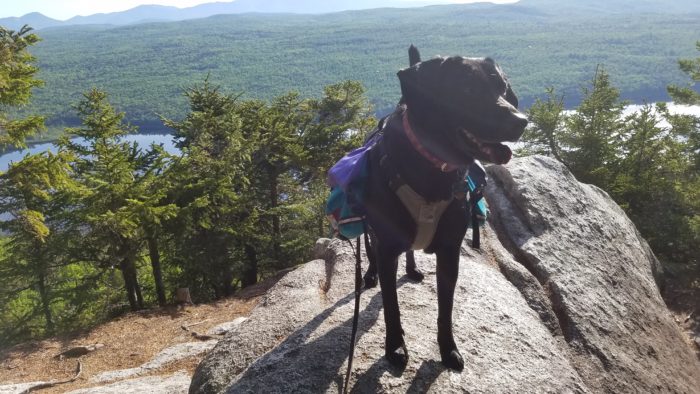 Arry on the mountain!

When we left, Arry didn’t want to go. I was confused, but a half mile down had the odd sensation we had already been on this part of the trail before. We turned around, and it turns out that little doggo had been correct all along. So we got to hike up the mountain twice. Yay. Oops.

The terrain has started to increase in root-i-ness and rockiness. Nothing like the first  30 miles of the 100-Mile Wilderness we did, but definitely noticeable.  I think the entire hike today kept us right next to bodies of water: Nahmakanta Lake, Crescent Pond, Pollywog Stream, Bean Brook, Rainbow Stream, and Rainbow Lake.

Pollywog Stream was beautiful. There was an overlook of the gorge, which was impressive. We were treated to small falls along the stream along which Arry would stop continuously to watch. I think she was trying to decide if there was a creature in the water making that noise or not. 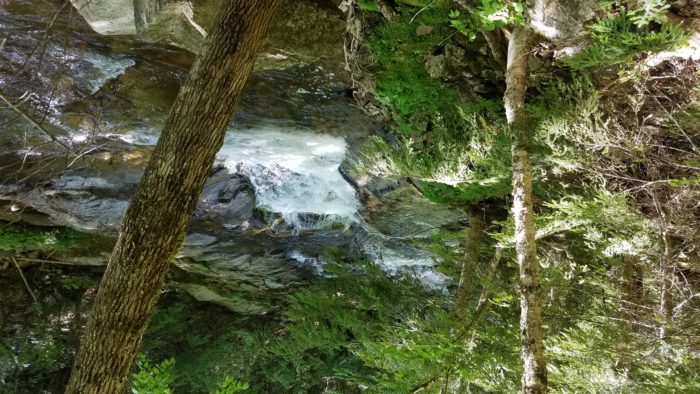 We ate lunch at Rainbow Stream lean-to, a gorgeous site right by a bubbling stream. There we met a few more SOBOs who had summited Katahdin. Today we met more hikers than I can count on my fingers and toes! It certainly is getting busy.

Between the lean-to to and our campsite, Rainbow Spring, we trudged through the Rainbow Deadwaters. I’m not exactly sure what deadwaters are, but we passed through some marshy, muddy areas.

The colors around Rainbow Lake were very vivid. The grass and trees were bright green, the lake was a bright green, and the trail, in most parts, was a reddish color from all the pine straw. 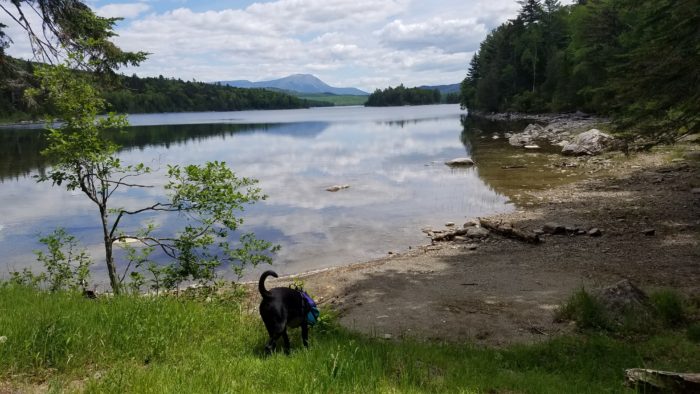 View of Katahdin by Rainbow Dam.

We took a side trail down to Rainbow Dam just because. There was a great view of Katahdin. It is getting closer and closer with each sighting!

A team of MATC trail workers was eating lunch as we passed by. Arry took a liking to them and decided to make a nest. So I took a break, sat down, and chatted with them for a while. I learned a lot about the upkeep of the trail and the different parts volunteers and workers play in it. They work for about three months in the summer, Saturday through Tuesday and then head out Wednesday to have Thursday and Friday off. When they work they camp at a site for the week, and then their “weekend” is spent at a cabin on an island!

Turns out their campsite for the week is Rainbow Springs! So Arry and I waved goodbye knowing we would see them that night.

They are a bunch of interesting people. One is a professional tree cutter. There is a lot more work that goes into it than one would originally think! One is a history major taking a year off. Another has done this seasonal work for the past six years! 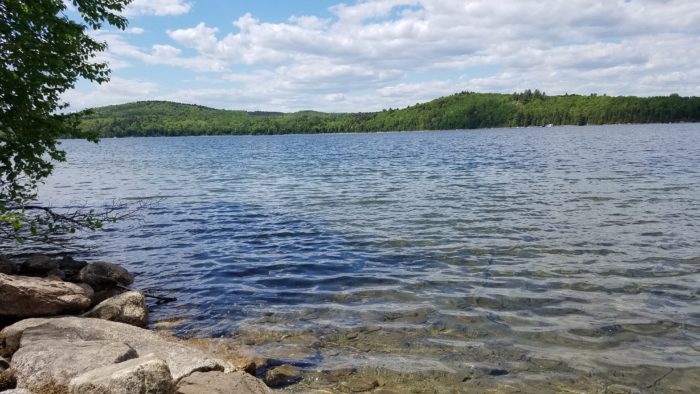 Fun fact: Every year they reroute the AT a little.  He said one thing they’re currently working on is a route around Fourth Mountain. (Back at Shaw’s, Poet said that would be the hardest part of the Chairbacks for us.) A lot of what they reroute is to decrease erosion or make a safer route, which usually ends up increasing the length. Remember when I felt like they just threw the walking around ponds into the trail because they ran out of mountains? Turns out the AT used to go through the logging roads, but they are sometimes utilized by logging companies so they ATC bought the mountains to reroute the trail. THE WATER WALKING CAME FIRST!

It has been a relaxing day. 11.2 miles to Abol Bridge and then Millinocket tomorrow to await my sister’s arrival. I’m excited, and we are close to the end of the beginning. Arry will enjoy being able to sleep in a bed again I think.

While I miss being able to stay with friendly faces I’ve already seen, I have continued to meet new and interesting people, and enjoy wonderful sights.  There is something so immensely wonderful about being able to just sit by the lake here, while my feet turn into icicles in the lake.

We made it out of the 100 -Mile Wilderness! Obviously the first order of business was acquiring ice cream! A muddy boots and Maine blueberry waffle cone for me, and a vanilla cup for Arry. 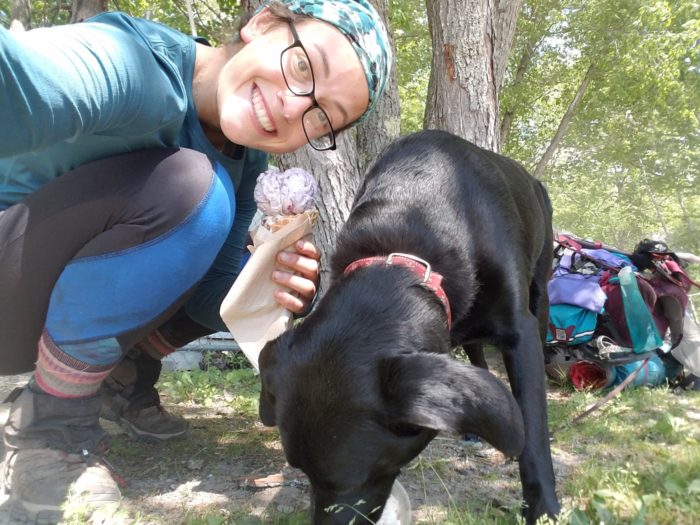 We started this morning saying goodbye to our friends in the MATC.  They were packing up to head out for the day.

I love morning miles. There is something about the sunlight, and the birds singing, and having the whole trail to yourself.  We walked along Rainbow Lake watching the sun peer through the trees, and it was beautiful.  I couldn’t help but mentally sing along to the few lyrics I know of from “I hope you dance. ” I was feeling the vibes this morning. 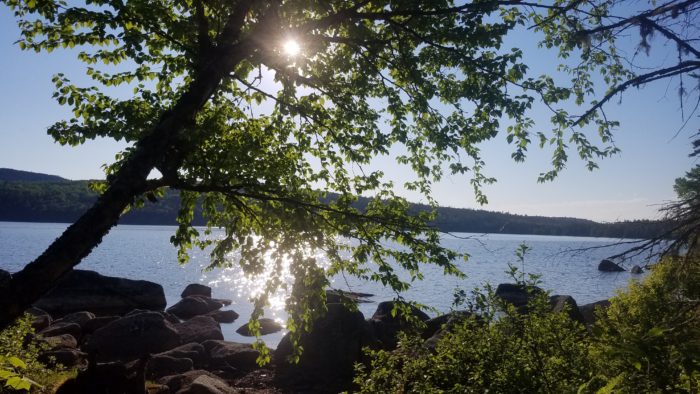 We began a rocky and rooty climb up to Rainbow Ledges, where we got another view of Katahdin. From there it was downhill to Hurd Pond lean-to, where we didn’t see a soul. A quick snack of beef sticks and we were moving with vigor along easy terrain once more.

The last two miles we passed five SOBO hikers beginning their 100-Mile Wilderness journey. They were so excited and high spirited. It was interesting to see the difference between their attitude and the attitudes of the hikers I met ending the 100-Mile Wilderness as Arry and I began. 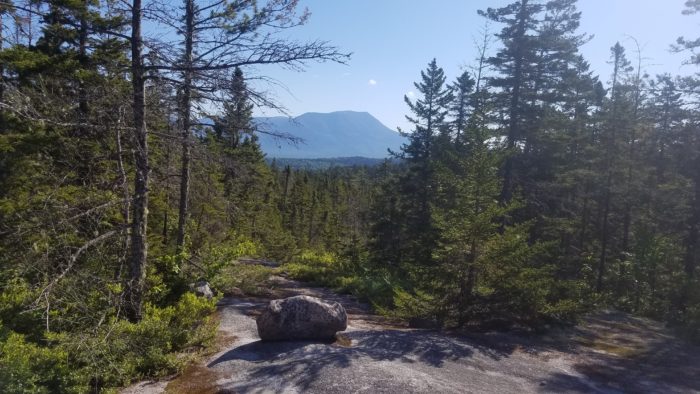 View of Katahdin from the Rainbow Ledges.

And then. We were out of it. It wasn’t super magical. I mean it felt magical. We saw the 100-Mile Wilderness sign for SOBOs, then came to a road, Golden Road. Taking a right we walked until we passed over Abol Bridge.

And here there was a small campground and tiny store where we waited for our shuttle while shoveling ice cream in our faces. 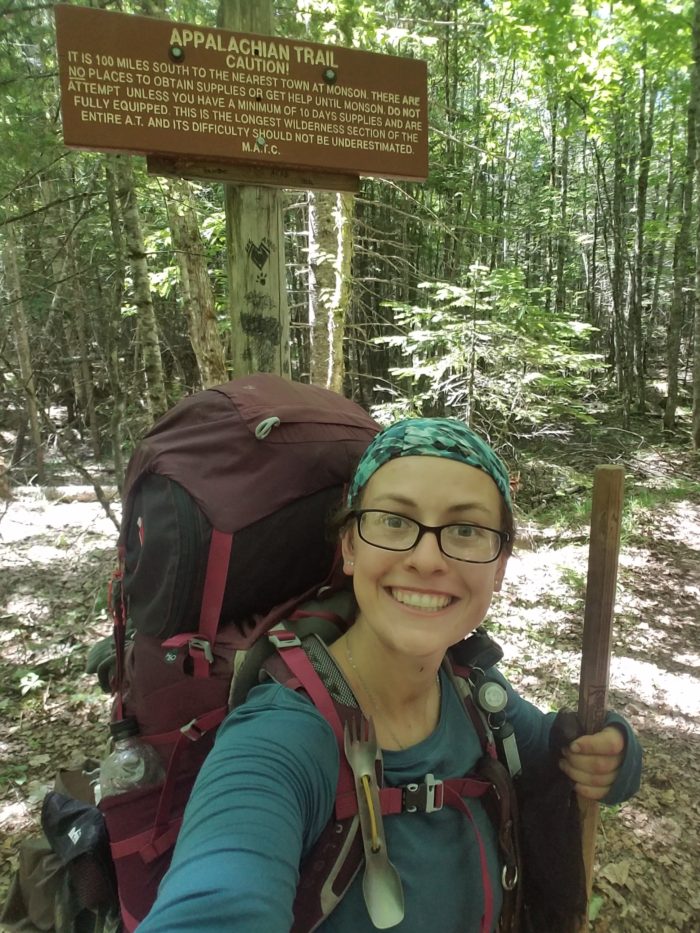 Officially out of the 100-Mile Wilderness!

The shuttle took us to the hotel, lodge, thing. Arry jumped right on the bed and passed out. After a shower I went looking for food, and came back with a salad in a bag, some fresh fruit, and two McDonald’s cheeseburgers. Arry woke up and we ate everything while watching TV. What a novelty!

I read until dinner time. Arry perked up and we went for a quick walk/pee. I tried to meet up with Roadie and Sunshine for dinner, but the shuttle was away picking up hikers, and I didn’t feel like walking three miles. This is one of the downsides of having a dog and having to stay in a hotel on the other side of town.  So instead I opted for the local pizza joint.  They did not disappoint. 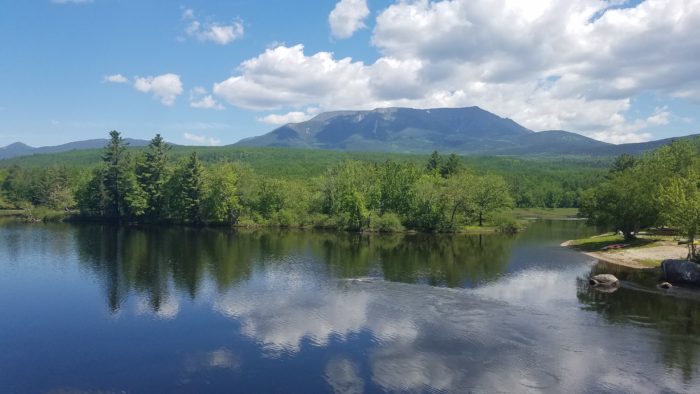 View of the mountain as we crossed Abol Bridge.

Arry and I feasted on pizza and chicken tenders.  Once consumed Arry curled up and went back to sleep.  I think she likes the bed, and lack of bugs.

Turns out one of my favorite movies was on TV! Seven Brides for Seven Brothers! I bought cheap nail polish at the Dollar Store,  and did a terrible paint job on my fingernails as I watched the classic musical.  Why did I paint my nails? Simply because I could.  For years in the Marine Corps I couldn’t, or it had to look natural.  So I’m enjoying fully the liberties I now have. 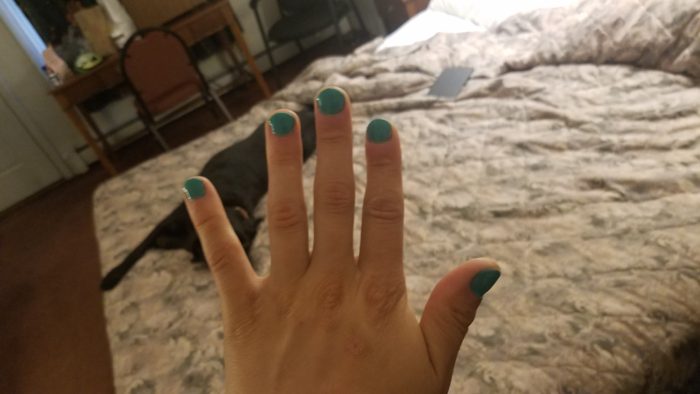 Tonight Arry and I should have plenty of blankets and bed space, compared to my sleeping pad and sleeping bag. Tomorrow I shall await my sister’s arrival! Drive safe, little sis!!