What Am I Doing??

What am I doing? What was I thinking? 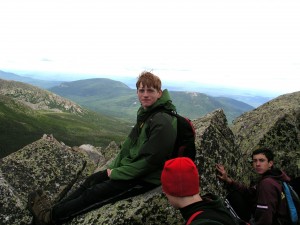 That thought runs through my head at least 3 times a day now.  My youngest son, Ian, and I have decided to hike the AT southbound starting next June.  This decision has been a while in the making.  Both of us like to hike and to backpack.  Ian was very active in Boy Scouts and I am still a Scoutmaster for a troop in our town.  The point where this moved from merely a random thought to something that became real was in late June 2010 on top of Katahdin.  Before then, we had section-hiked parts of the AT throughout New England and Pennsylvania, and done a lot of weekend backpacking and camping trips.  While, the idea of backpacking continuously for six months was something that we mentioned from time to time, it never got any serious thought.

So this particular day, number 3 of a 4-day visit to Katahdin and the Knife Edge, Ian and I were hunkered down on the summit in fog and sleet (yes, it was sleeting on June 30) with some other scouts from my troop.  We were tired, cold, and somewhat miserable and unhappy because I wouldn’t let a bunch of teenagers traverse the wet and icy rocks of the Knife Edge in fog so thick you could see less than 10 feet.  There was a ranger up there who would walk past periodically and say, “Use good judgment.”  and apparently my idea of good judgement differed a bit from my scouts (sometimes being Scoutmaster is no fun…). 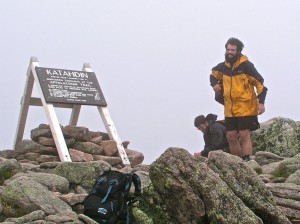 And then we saw them through the fog – two scruffy-looking, smelly individuals with scraggly beards running up from the southwest screaming like maniacs.  Both were in rain jackets and shorts.  One of them was wearing a pink Dora the Explorer daypack.  Or maybe it was a My Little Pony daypack – my memory isn’t what it used to be.  Anyway, what we were witnessing was two thru-hikers, Eagle Scouts from Buffalo New York, finishing their journey.  All of a sudden it wasn’t as unpleasant on the summit and the snow/sleet became much less noticeable.  We weren’t as cold or as tired.  We were fascinated.  We sat and talked with them for about 30 minutes.  It was then that I saw something set in the eyes of Ian and some of the other scouts – something clicked.  It was at that point in time where, the idea of an AT thru-hike stopped being “Someday, it might be nice to…” and became “Someday, I am going to…” I guess something clicked within me too.

Fast forward to this summer.  I am 60 years old and have just reached a transition point in my career (I am actually looking to see if I can fully retire a little early).  Ian is in his last year of college and will be graduating this spring.  All of a sudden, in 2015, I have the time and he has the time.  I realized that I’m not getting any younger, and if I don’t do it now, it’s not going to get any easier.  I’m pretty sure Ian was going to do this one way or the other no matter what, and he seems pretty happy to do it with me.  Go figure….

We talked about how to approach it.  NOBO was out, as Ian couldn’t really start until the end of May and that would put a crunch on time – particularly at the pace I hike.  We talked about flip-flopping and that did not feel like a real thru-hike to Ian.  So…  We decided to start from Katahdin as soon as possible after Ian graduated and head south.  That way we avoid the time limit of needing to finish at Katahdin before bad weather closes access to it in October 2015.

That was the beginning of the summer.  After a period of elation and heady excitement the reality of the decision is starting to hit home and the roller coaster of highs (“This is going to be awesome!“) and lows (“What am I doing??“) have set in.  I worry that I’ll only last a month.  I worry that I’ll miss my family.  Well, not all of it because I’m bringing Ian with me.  But the rest of it – particularly my wife, Linda – will be sorely missed.  (When I asked her if she wanted to come with us, she said, “I’ll miss you, but not enough to agree to be that dirty for that long.”)  I’ll also miss my scout troop.  But, Ian and I are committed.  We’ve been telling everybody we know all summer what our plans are.  I expect my roller coaster of elation and doubts will continue through the winter and spring, right up until the point we summit Katahdin and then – the next day – take our first steps into the 100-mile wilderness. 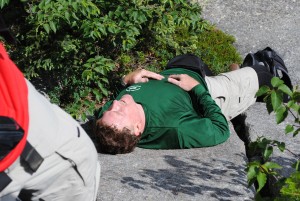 I started reading everything I can get my hands on  – books, web sites, discussion groups.  I began following whiteblaze.net.  I re-read “A Walk in the Woods” and now understand that little voice in Bill Bryson’s head (“Sounds neat.  Let’s do it!”).   Another book that has really appealed to me is “Appalachian Trials” by Zach Davis, aka “The Good Badger”.  It really hit home that the most important part of preparation is the mental preparation.  I took that to heart and have started to write out my lists for why I am doing this.  I know I don’t want to start this adventure like Bryson and then give it up when I look at a four-foot high map and realize that I only traveled “the bottom 2 inches”.  I think I have made a much better choice than Bryson in a traveling companion – certainly one in much better shape.  Of course on my “low days” now, I worry that this choice will mean Ian decides to dump me somewhere in the 100-mile wilderness cause I’m too slow.

Anyway, I went to Zach’s web site to order a copy of the book for Ian (its kind of hard to share a book when its on your Kindle).  In exploring the web site, I applied to be a 2015 AT blogger on the site.  I didn’t really expect it, but my application was accepted.   This has been both a blessing and a curse.  A blessing because it took my mind of my worries about hiking the trail.  A curse because it replaced them with worries about writing about hiking the trail.  It seems late in life to start a writing career, and I worry that no one will be particularly interested in reading about a 60-year old who thinks he can walk 2,100-plus miles.

Zach was very nice in his email, saying that I could start writing any time – now, January, or after we start.  Ian said he would be willing to help me, so this will most likely morph into a shared blog between the two of us.  The more I thought about it, the more I decided that there is no time like the present to get started.

So this is it.  We are – or at least I am – in full preparation mode.  I’m looking at my gear, planning some shakedown trips between now and next May, and generally getting myself mentally prepared.  If I send Ian one more email from an AT web site, he’ll probably kill me.

Whatever.  Right now, at this particular moment, my roller coaster is on the upswing.

It’s going to be awesome!