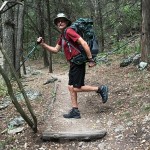 What’s in a Name

Its hard too see but the bear in the middle tried to steal my food. As I was walking into Fingerboard shelter a hiker told me it had a bear problem. A mother bear and her two cubs had been stealing bear bags that were hung poorly. As I walked in I was telling hikers about the problem bear when a couple said they had seen the bear. Now everyone that knows me knows how much I wanted to see a bear. Everybody said I would see 4 or 5 in Jersey but no luck for me so I was excited. I picked my tent site with a good branch to hang from when while  setting up my tent I heard my backpack fall over. 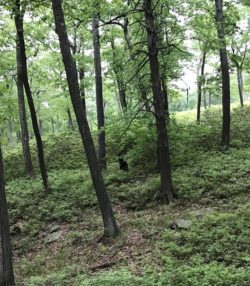 When I turn around the bear had its nose in my pack trying to get my food. I got pissed and charged the bear yelling get the f… out of my bag you MFer. I was charging and yelling when she pulled out and moved about fifteen feet away and turned to look at me. I just kept coming and yelling all kinds of profanity so she moved about 30 feet or so and looked at me again. I just keep charging her till sanity took over and I thought once she gets close to her cubs she will turn on me so I stopped and continued to yell till she was across the canyon in the picture. Now there were about 20 to 30 hikers watching or at least listening to this as the site is bowl shaped.  That night as I was going to sleep I could hear the cubs around my tent so I politely asked moms bear to leave as I had no food. She left and I slept like a baby. Lots of the hikers at the site moved to the shelter and wanted to know was I afraid. A bear is only interested in my food not me so once I had hung my bear bag PCT style it was no worries for me. As I was leaving the next morning everyone was calling me BearChaser 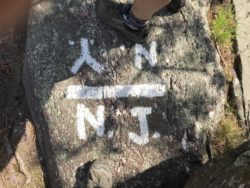 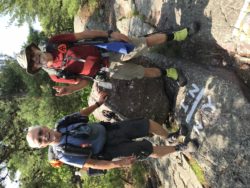 After about 40 minutes later on the trail I realized as much as I liked Hook’em as a trail name, it was about me and BearChaser was about the trail so I am now BearChaser. The young fella in the picture with me is Caveman. His name is as interesting as mine. Ask him when you meet him on the trail. I think most trail names have a great story behind them just ask.

Hello. My friends know me as Bux and my tenitive trail name is Boomer, as in baby boomer, from my blog www.Hippiehike.com I will be a Flip-Flopping hiker starting NOBO from HF then SOBO from HF starting in late April. I am a life long hippie and first time backpacker. Peace.