What the heck I hope to gain from this

In my mind, I am the absolute last person who normally would be expected to hike the Appalachian Trail. I am a 34 years old worker in the IT industry, and until a few months ago, I could be expected to spend upwards of around 10 or 12 hours a day looking at a computer screen. I weigh 330 lbs, (or I did when I first decided I was going to hike the AT, two months of training later and I refuse to weigh myself yet) and Netflix, my XBox, and obsessively checking Facebook rounded out my free time. I’d occasionally go for walks in the park, and at the encouragement of my father I tried “running” a 5k a few times along with the rest of my family. (it was really more of a 3+ mile waddle in my case)

So why the AT? What in the world makes me think this is a good idea? How do I answer the doubtful looks I’ve already gotten from some people when I’ve told them? (I swear, one person looked straight at my gut and said, “wow that’s going to be a big job”) So I thought I’d lay out some of my goals/hopes/reasons here.

I had a depressing moment the other day at work. In my job, I’m responsible for what’s called a “quality monitor.” This consists of listening to phone calls or reviewing documentation by agents on the phones, scoring them according to some set guidelines, and uploading their scores into some tracking documentation. It’s a fairly standard practice in almost any call center environment, and something I’ve done for years across a couple different jobs. So each month, I start off with a long list of these monitors that need to be done. Day in and day out, that list is one of the first things I’ll look at each day, and the entire month is the journey of filling it out. There’s a brief moment of relief at the end of the month when it’s finished- look at all the work I’ve done!

But lately, it’s started grating at me. I work all month to finish that list. Filling out Excel spreadsheet after Excel spreadsheet. I briefly feel satisfied by completing a month, then immediately crushed when a new one begins. Like the previous effort meant nothing.

This is a random set of numbers I plugged into Excel, but they’re indiscernible from what I might actually do each day. Except C3, that’s just how the image makes me feel

The AT was always a distant thought that had been in the back of my head, going back for years at least. I can’t even remember when I first heard of it, or when I first started saying “maybe some day.” It was always a “some day” dream though. One day when I’m fit and cool, or when I’m retired, or independently wealthy. (step 1. fill out Excel spreadsheets. step 2…. step 3. Profit!) Over the course of recent time, though, it’s become more and more of a call. Something I daydreamed of. The idea of waking up each day knowing I was a measurable number of miles from where I was the day before. the idea of each evening seeing me closer to Katahdin or Springer. (NOBO or SOBO hadn’t settled for me yet)

I want to be clear here. I know I’m making my job sound horrible, but it’s not. I love my job, and I get a satisfaction from it. However, I’ve started to realize that I’m often doing it because it’s what I’ve been doing. It’s been a habit, and not one I find myself committed to in the same way it was when I started. Maybe by taking a step out of my current context for a while, I’ll get the perspective I need to figure out why I want to do what I do.

Alright, please don’t misunderstand me. I don’t think hiking the AT is a brilliant plan for weight loss. It could work, but if I took my 330 lbs ass out on the trail as it is, it would be almost certain to end in pain, injury, and probably a funny YouTube video or two. 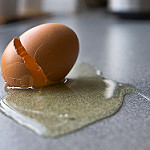 Like this, except me. And on a dirt trail…In the middle of nowhere…With bears. (CC Image courtesy of Luis Miguel Justino on Flickr)

But at the age of 34, I’ve been overweight for most of my life, and I’ve tried multiple times to “get in shape.” (round is shape) Each time went well for a few weeks, but then ended pretty quickly as soon as I had a day or two that I couldn’t make it to a gym or was too busy to eat healthy and a dollar menu meal bucket started calling my name.

The last two months though, ever since I decided I wanted to finally do the AT, has been the longest period of time I’ve stayed committed to getting my butt in gear. I’m not going for some amorphous goal of “get thin so girls will like me” or even an abstract “I’ll feel better about myself if I’m healthy.” These have all been vague, largely imaginary, and honestly at the end of the day, pointless goals, at least for me. They weren’t solid motivators. But now, I’ve got something in my head. When I’m halfway through a workout and want to quit, I start thinking about being stuck in the mountains in the rain, my wet torn boots creating blisters seemingly miraculously from thin air. If I’m not going to quit then, I sure as heck am not going to quit now, sweaty and panting in the middle of an air conditioned gym, with a long hot shower to look forward to when I’m done. I’m telling people I plan to hike, and now I have a sense that if I don’t keep up my training plan, I’ll have to face them and tell them I didn’t have what it took to follow through. And I’ll be danged if I let that get me.

Ok, here is where I’m probably going to sound like a crazy person, or at least like a crazier person than I sounded already. I get that, and I don’t expect it to come across any different.

After a bad break up a few years ago, my life kinda went into a downspin for a while. I basically devoted a significant portion of my life to balancing between workaholism and alcohol. If I wasn’t in the office, I was drinking. The local liquor store knew me on sight, and I was going through two 1.75L bottles of bourbon a week. (hey, I’m a Kentucky guy) I gained 50 lbs, and felt continually more and more miserable. 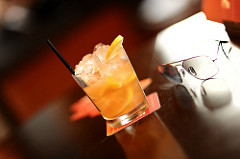 This stuff is awesome in moderation, but if you replace the glass with a bucket sized serving, you’re gonna have a bad time. (CC Image courtesy of Dustin Diaz on Flickr)

I finally reached my rock bottom point when I was hospitalized for chest pains. They weren’t able to identify a physical cause, (though they were pretty sure it was anxiety attacks) but in the process of running tests discovered I’d started to do some pretty serious damage to my liver. This began a process that involved my giving up alcohol for a year, and rediscovering the faith of my youth.

I grew up in a Christian home, and church, prayer and Bible study were major features of my home life as a kid. When I went to college, I actually went to a Bible college in Cincinnati, and worked part time as a minister in a small country church for a short while. After college fell through though, along with a number of other setbacks in life, I went through a time where God and I did not get along. Honestly speaking, I’ve still got my issues and disagreements. There’s anger that I’m working through and doubts, but the fact remains that it was in my local church that I was able to start putting my life back together. I rediscovered a fascination with the spiritual disciplines of the old Catholic orders. When I was younger I’d sometimes day dreamed about living in a different time as a Benedictine monk, spending my days baking bread and living a simpler life. As I’ve started planning my hike, I began to realize that I was hoping to find this expressed in the journey as well. Finding a quieter place to wander, to think, to meditate, and to find some of the peace that I know I still need. I expect in many ways, whether I’m successful in my thru hike or not, my perspective on many things will likely change when it all comes to it’s end, and most of it will be unpredictable.

And really, that’s what this is all about. I want to meet the person I’ll be on the other end of this journey. I’m hoping that person will be more at peace with who he is than I sometimes am. I’m hoping that person has a clearer idea of what direction he wants to go in. It’s entirely possible that person will have a deep seated fascination with Excel spreadsheets and won’t mind a few hours a day in front of a computer. I don’t entirely know what to expect from that person, but I’m rather looking forward to meeting him.