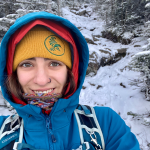 It has been over seven months since my last post. Seven months of anticipating this very message. I failed to blog about my thru-hike while I was on my journey. I was excited to have the opportunity to share my adventure with you all, but when it came down to it, I just couldn’t do it. I couldn’t bring myself to spend my time in town fooling around on my phone and ignoring the obvious. The obvious being that I was distracted by this “obligation” I had put on myself.

Very early on, basically day one, I realized that there was no way I would be able to keep the posts coming. I was overwhelmed with learning how to function in the woods and adjusting to my new lifestyle on trail. I watched as people sat around camp worried about updating their friends and family. I became aware that this would feel more like a burden than something I was excited about. I didn’t want to portray the trail from that perspective.

I decided that instead of writing from the context of being on trail that I would come back afterwards and use this as an outlet to process my adventure. I wanted to be able to share my experience in a way that was useful and not just a day to day write up of what was happening on trail. With all that being said I am happy to be able to begin to share my journey with you all now.

Let’s just get this one out of the way real quick! Everyone on the trail receives a trail name. Trail names come to you for all sorts of reasons. Maybe you did something silly, maybe you carried something strange, maybe you talk about the same crap all the time and your name is inspired from that. There are many different reasons why one might receive the name they do. Ultimately it’s your decision if you want to keep the name or not.

My trail name is “Ballsack.” Yep, that’s right I said “Ballsack.” Before you decide to be annoyed or disgusted, hear me out. At first, I was nervous to accept this obviously x-rated name. I was unsure how people might respond to a young woman named “Ballsack.” Let me tell you, I got some WEIRD reactions when I introduced myself. For some reason though, it felt like it was the right name for me. Here’s why.

All of this started at Neel Gap, mile 31.3 of a 2,193.1 mile journey. This was literally day three for me. After crawling over Blood Mountain, the first big climb, you descend down into Neel Gap. Neel Gap is filled with food, gear, showers, lodging, literally anything you needed they probably had it. There were tons of hikers rolling through when I arrived and I was happy to be surrounded by so many unfamiliar faces. This was it, this was the beginning of friendships that will last a lifetime.

As we all passed through Mountain Crossings at Neels Gap we proceeded to go to the nearest campsite, Bull Gap. I was BEAT that day. I had stupidly hiked almost 18 miles and my body was feeling it. I knew I was capable of that mileage but it was dumb considering it was my third day on trail. I had decided before I came out to carry a massage tool that I used in the dance classes I teach at home. This particular massage tool was a double ball. As a large group of us strangers made a fire to sit around for dinner I brought my massage balls to the circle to roll out my calves, feet, back and glutes.

Suddenly I was being questioned, “What is that,” “What do you use those for?” Then it became a joke as I was explaining how to “use my balls.” People were asking if they could “touch my balls?” or “give it a shot rolling on my balls.” It got very out of control very fast, haha!  I JOKINGLY said, “if you keep talking like this I’m going to end up with a trail name like Ballsack.” Then boom, it happened. The rest of the night people called me Ballsack. I didn’t know if I wanted to accept that name in the moment but the more I thought about it the funnier it became. 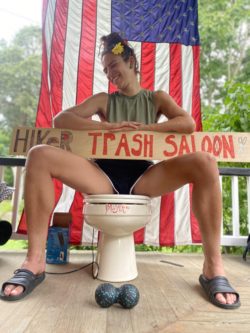 I liked the thought of having a controversial name. I liked when strangers gave me weird looks and I explained that my balls were a massage roller. I liked that it made people feel a little awkward. I like pushing limits. I had a fun time embracing the name and learning to respond to it. It took off so fast I almost had no choice but to accept it. I later learned about some other x-rated trail names out there, y’all know who you are. It then became my mission to meet these humans and all embrace the fact that we had ridiculous names.

Over the course of the trail it felt like I had grown a reputation. People would come up to me and say “Oooooooh YOU’RE Ballsack?!” with excitement. “I’ve heard about you!” I think most people enjoyed that a young woman would accept such a name. I had grown into it and had truly embraced it. I was no longer Jocelyn anymore and this was my new identity.

Now you know the story behind the legend of Ballsack on the Appalachian Trail. 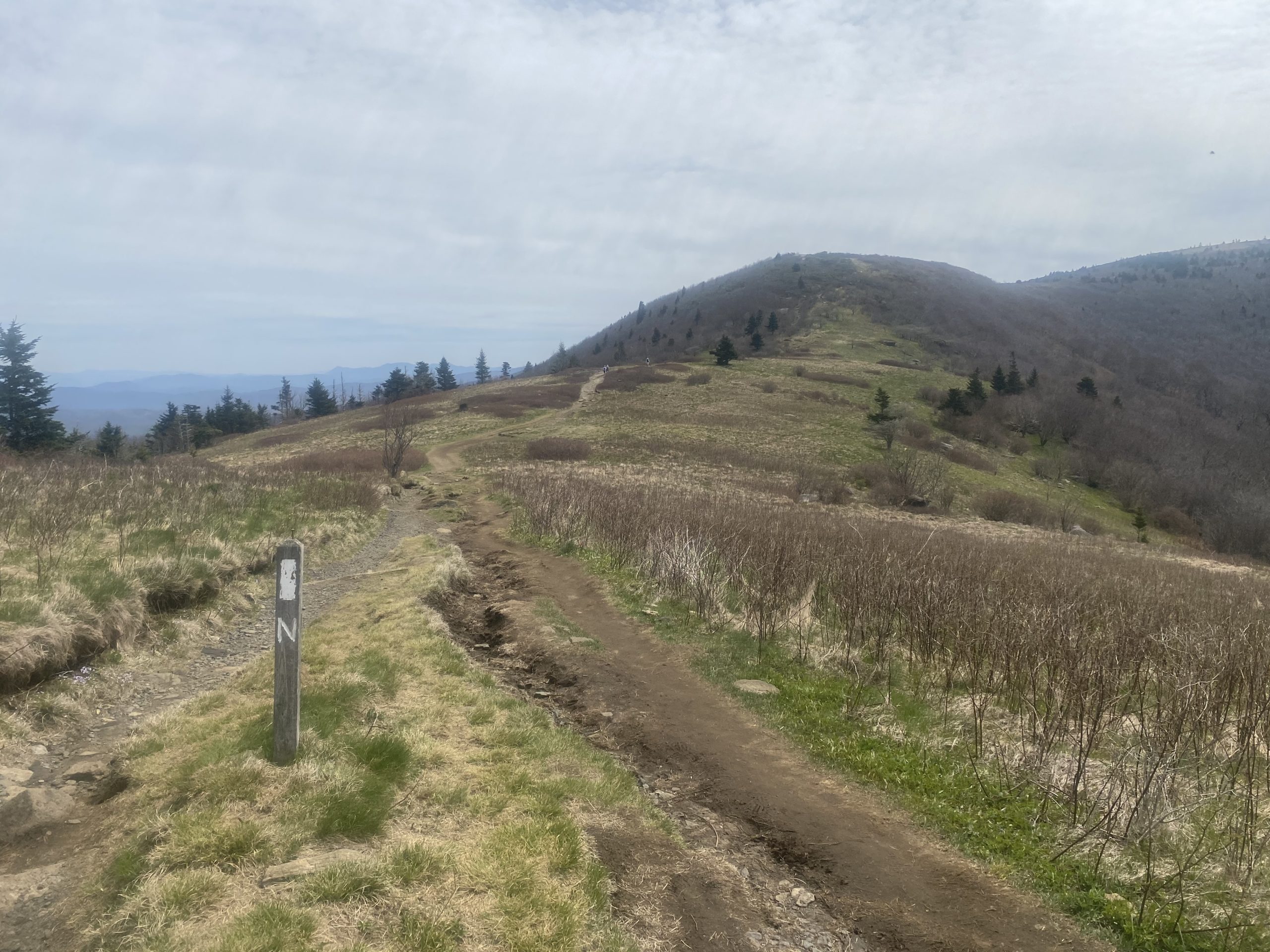 Less than 200 miles into the trail, a man, Smokey the Bear, woke suddenly from a nap and asked a group of us sitting around the fire, “What’s your name? What’s your journey?” I thought to myself that this was a BIG question to ask.

What was my journey?

I knew that the beginning was in Georgia and the end was in Maine, but was that really all the journey was? I thought about this question all along the trail and wondered if I’d ever find the answer to it. Now that I am off-trail, I am still wondering.

Simple answers flooded my brain. I thought that maybe I was out there to seek answers to questions I had, only to find more questions. I wondered if being on the trail was a journey to self-healing and empowerment. I speculated if I was out there to seek solitude or to learn how to maintain friendships in a healthier way than I have. I wanted my journey to feel like an epic accomplishment. I wanted to have some wild epiphany or life-changing moment that I could look back on and say THAT is what the journey was all about. In reality, all of these things and none of these things happened….what?

“The Journey is the Destination.” – Dan Eldon

I remembered this quote by Dan Eldon “The journey is the destination”. I began to look at each day as its own journey. Each day held a destination and that was the journey itself. It had nothing to do with some epic ending point or some ridiculous moment of clarity. It had everything to do with embracing the little moments of every day. It all became about the littles things. The way the moss felt after the morning dew or the sweet smell of a morning fire burning through my nostrils. It became about the smiley faces made in rocks left on the trail or the simple “hello” from an unfamiliar face. The journey was never about getting to Katahdin, though that was the end goal, it was about living life and finding serenity to mother natures ways. 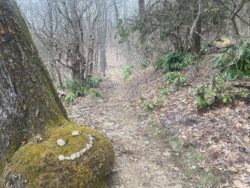 The journey became about overcoming the monotonous ways of normal society. It helped me take a step back and stop giving power to the need for having a schedule or everyday obligations. No matter how much I tried to “plan” on the trail it always changed. My journey gave me the power to make my own choices uninfluenced by others or obligations. For what felt like the first time in my life I was able to make healthy choices for myself. Thru hiking is a selfish and daunting task. Though we are surrounded constantly by others trying to reach one similar goal, we are all out there to live in a way that is truly free.

That freedom comes at the price of literally doing whatever you want for you.

I had the luxury of hiking with no time frame and basically had financial freedom. I was able to soak in every single day without worrying about “making it there on time”. My thru hike took 202 days, which is a very long time. I knew that I wanted to embrace each opportunity that was presented.

I didn’t want to end the trail with any “I wish I would haves,” so I didn’t. 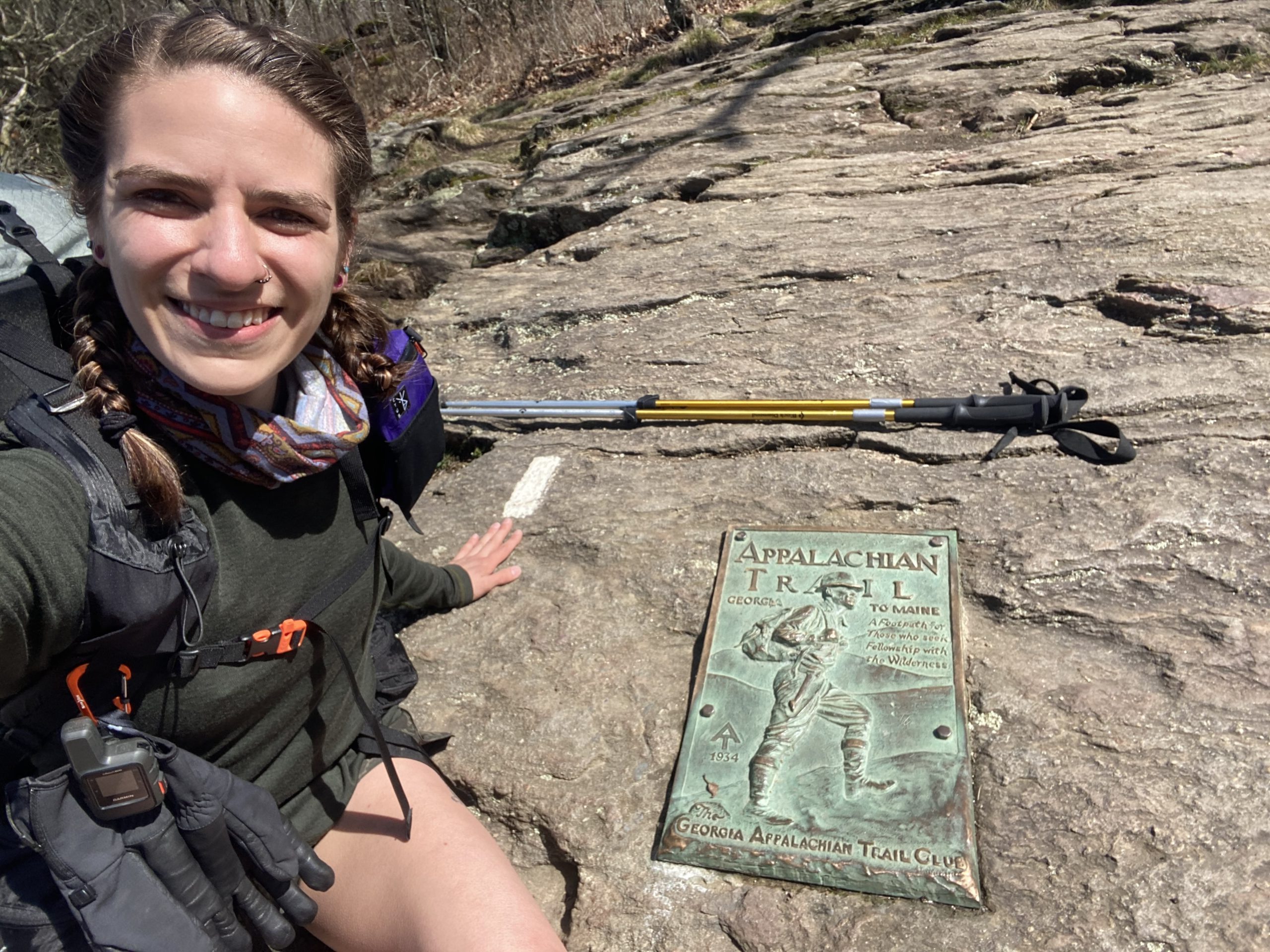 I am a thru-hiker who's been stuck in the body of a bar manager for 7 years. After getting fired from my job in December I realized I had the opportunity to go hike the Appalachian Trail 2021. As a Pole Dance teacher and student I hope to bring my love for Aerial Art to the trail. I call it "Tree-Pole". I love going into the woods on a hike and finding that perfect tree to dance with and use aerially for tricks! It's just fun and I like to have fun! Also, if you get anything stuck in a tree I'll gladly get it down! I am a cat lover, goldfish eatin', sucker for candy, orange juice drinkin', peanut butter lickin', old soul in the body of a 27 year old. Get to know me and follow my Adventures Of A Wild Jocelot!