Who was the First Female Thru Hiker? 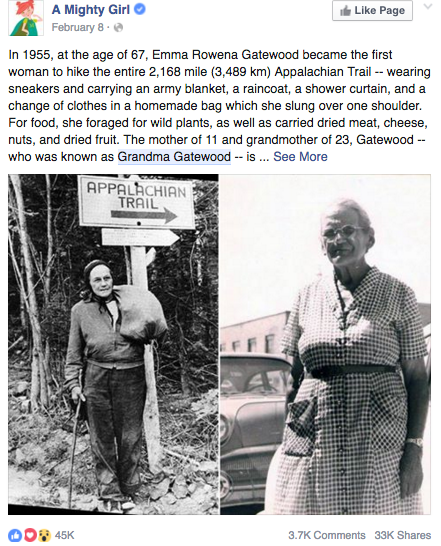 Grandma Gatewood’s rough and tumble attitude and legendary quotes remain an integral part of the woman herself. She’s famous for standing atop Katahdin and declaring, “I said I’ll do it, and I’ve done it.” and the growling, “Most people today are Pantywaist.” when asked about her remarkably simple hiking gear.

She is a cultural figure for the ages. She is the Grandma who hiked by herself, with a canvas sack, Ked Sneakers, and a shower curtain for two thousand miles.

But behind her place in the Appalachian Trail Hall of Fame, behind the documentaries, behind the New York Time’s best selling book , behind all the Facebook Pages and thousands of inspirational shares…

is the shadowy figure of the first woman to hike to thru hike the Appalachian Trail. Her name was Mildred Lisette Norman Ryder and she was known as Peace Pilgrim.

Grandma Gatewood was NOT the first woman to hike the Appalachian Trail.

On April 26, 1952, three years before Grandma Gatewood’s name ever graced newspaper headlines, Mildred Ryder summited Mount Oglethorp, then the terminus of the Appalachian Trail. She began her long walk north. She walked until she met the Susquehanna River in Harrisburg, Pennsylvania. She then flip flopped north to Katahdin and walked south until the white blazes of the Appalachian Trail met the white blazes of the Long Trail. She continued north to Canada on that storied route. After the completion of the northern half of the Long Trail, she returned to central Vermont and again walked south. On the way, she completed the first flip flop hike of the Appalachian Trail. When she reached the Susquehanna in the fall of 1952 she made history for the second time and…

…became the first woman to thru hike the entire Appalachian Trail.1

“The flowers bloom, the songbirds sing

And though it sun or rain

I walk the mountain tops with Spring

From Georgia north to Maine.” 4

The Appalachian Trail Conservancy doubted the validity of “The Crazy One’s” 2,000 mile hike. But the man that departed from Mount Oglethorpe in an effort to “Walk the army out of my system” had indeed become the first Appalachian Trail thru hiker.5

The first thru hike of the Appalachian Trail resulted in newspaper headlines for Earl Shaffer and a National Geographic feature that brought notoriety to the newly constructed trail.6 Shaffer’s hike and the corresponding press would directly inspire another solo hiker to embark on a journey from Georgia to Maine when Grandma Gatewood read that very National Geographic article while waiting at her doctor’s office.7

But Gatewood would not find coverage of Mildred Ryder’s hike. Her historic completion of the Appalachian Trail went largely unnoticed and uncelebrated. Like Schaffer, Mildred had contacted the Appalachian Trail Conservancy. She even corresponded with Schaffer during her thru hike.8 Perhaps the chief reason that Mildred Lisette Norman Ryder’s hike fell into obscurity was that she was memorable – for all the wrong reasons in 1952.

Mildred Norman was born and raised on a small poultry farm in rural New Jersey in 1908. She grew up poor, but her close knit upbringing was rich in non denominational ethics of morality and peace. She grew up precocious and excelled in schooling. When she graduated high school she took secretarial jobs and became, “…very much what they called a flapper in those days. She had to have the latest clothing….”9 She was very much a typical young woman. Following the typical path of a young woman in the early part of the 20th century, Mildred Norman soon became Mildred Norman Ryder. She eloped with businessman Stanley Ryder in 1933. But the marriage began to decline with the rise of World War II tensions. Stanley’s traditional ethics began to clash with Mildred’s growing dedication to her non-traditional upbringing. The marriage finally dissolved when Stanley was drafted in World War II, where Mildred could not support him due to her now vehement anti war stance. In 1946 their divorce was finalized.

In 1952 when reports of a couple hiking north from Mount Oglethorpe began to surface, the man hiking with Mildred Norman Ryder was certainly not her husband. Richard Lamb would accompany Mildred Ryder from Georgia to Maine. Along the way they introduced themselves as “Dick Lamb and Mil” to avoid any scandal in the conservative 1950’s domestic sphere. But perhaps this is the reason that a postcard reading,

As editor of “Appalachian Trailway News,” you may be interested in hearing a few more facts about the first couple (especially the first woman) to traverse on foot alone the entire 2,050 mile Appalachian Trail in one season of less than 5 months. On April 26 we started from Mt. Oglethorpe and went up to Harrisburg in 2 1/2 months, hiking about 15-20 miles a day and camping out each night. Then we went by car to Mt. Katahdin, Maine, and walked already 200 miles of the wild northern half of the Trail, back toward Penna., where we expect to be by October 1. This trip is a healthful experience in simple, natural living.

resulted in a small blub in Appalachian Trailway News in 1953. The newsletter did not announce Mildred Ryder as the first female thru hiker. They did not even include her full name. They simply wrote,

“At various times during the summer, persons on the Trail reported meeting “Dick and Mil”, as they introduced themselves, who were making a through trip…The mystery was solved early in November when a letter from Dick Lamb of Philadelphia reported that they left Mt. Oglethorpe on April 26, and walked north to the Susquehanna River…While not a continuous trip over the Trail, this was a traverse of the entire Trail route in one season”. 10

Though the world at large did not celebrate her achievement, Mildred Norman’s Appalachian Trail thru hike changed her forever. Her dedication to ethics of peace had grown since her tumultuous marriage to Ryder. Her months in the woods confirmed her dedication to these ethics and gave her the tools with which to spread her message.

“The inspiration for the pilgrimage came at this time. I sat high upon a hill overlooking rural New England…. I saw, in my mind’s eye, myself walking along and wearing the garb of my mission… I saw a map of the United States with the large cities marked — and it was as though someone had taken a colored crayon and marked a zigzag line across, coast to coast and border to border, from Los Angeles to New York City. I knew what I was to do. And that was a vision of my first year’s pilgrimage route in 1953!”11

Peace Pilgrim would walk for the cause of Peace for twenty three years and over 25,000 miles. Images of the woman dressed in a blue tunic with the words Peace Pilgrim emblazoned across the chest graced newspapers for almost a quarter century. She was a prolific speaker and writer. Her radio and television interviews can still be found in dusty corners of YouTube. A book of her compiled writings and pamphlets reveal the spiritual teachings of a woman tirelessly dedicated to her cause.

The story of the woman named Mildred Ryder ended somewhere on a footpath between Georgia and Maine in 1952. She found something in those 2000 miles that changed her very being and changed her identity forever.

She would later write, “I can see no reason to dwell upon my past, it is dead and should not be resurrected. Don’t inquire of me— ask about my message. It’s not important to remember the messenger, just remember the message”12 But since Peace Pilgrim wrote these words, the popularity of thru hiking has more than quadrupled.13 There is something about hiking in the woods that offers respite from a culture still plagued by fear and conflict. Walking brings peace with every footstep. Mildred Ryder walked until she found it. Peace Pilgrim dedicated her life to spreading the message of Peace to the world. Though Mildred Ryder’s story is largely unknown, misattributed, and overshadowed, her remarkable story is reincarnated in the footsteps of thousands of thru hikers every year. The footsteps of the first woman to thru hike the Appalachian Trail, Mildred Lisette Norman Ryder. 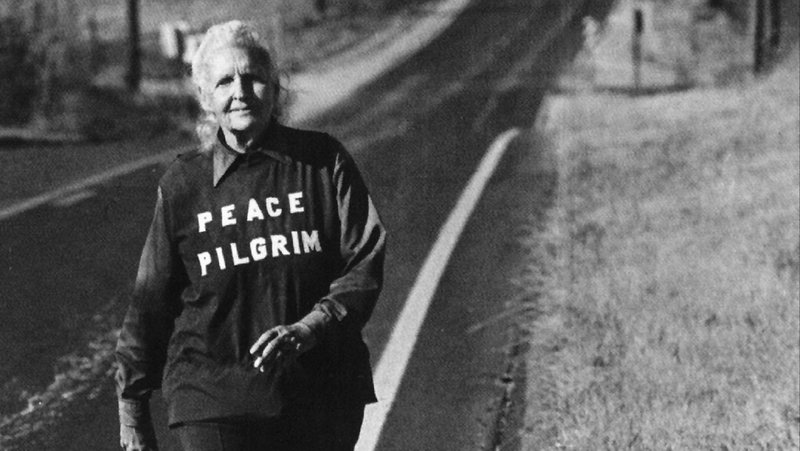 “If you do not yet know where you fit, I suggest that you try seeking it in receptive silence. I used to walk amid the beauties of nature, just receptive and silent, and wonderful insights would come to me.”14