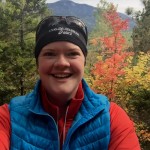 For your Tuesday night entertainment, the following is the story behind my ironic trail name, GPS.

The day dawned hazy and humid. Pavement baked in the sun and barely a breeze rustled the trees. Kat and I were about to take our first steps on the Appalachian Trail. Up until this point, I had imagined most of it to be remote, peaceful and unsullied by civilization. Today, we learned otherwise. We were to begin our five day section hike in North Adams, MA and make our way down to Becket, MA where my kind brother would pick us up (with a bottle of Febreze). Kat’s dad graciously drove us to our starting point, or at least what we thought was our starting point. I mean, the sign did say Appalachian Trail. It directed us over a railroad and up a steep incline to the back roads of a quaint development. Our packs each weighed between 35-38 pounds. Before our hike, that sounded bearable and not too bad. After our hike, I understood why people splurge on ultralight gear. We donned our gorgeous packs, flipped open our trekking poles and staggered to the top of the hill. Not really. After we dragged our packs out the trunk, I spent ten minutes trying to put mine on and five trying to buckle the waist belt. THEN, we started off up the hill. You know it’s going to be a rough day when you’re already covered in sweat before you even step off the pavement. Yet, we were lighthearted and filled with nervous excitement. Thus, our adventure began.

We had planned an easy 3.5 miles into our first shelter, giving ourselves time to set up camp. With a quick hike ahead and dinner on our minds we set off, immediately finding ourselves in the cool shade of a forest. Continuing straight onto a narrow gravel track, we strode ahead, humming tunes and jabbering cheerfully. Our revery was broken when we encountered an entire city of spider webs. Spluttering desperately, we stopped to paw at our faces and peel webs from our clothes. Moments later, we entered a low hanging cloud of huge mosquitos, drawn to our sweaty legs and burdened reflexes. Something was not right. We had not seen a white blaze yet, could still hear neighborhood dogs barking and were pretty sure the hunting stand to our left was not a part of the trail. We crossed a creek (which becomes incredibly complicated when you’re carrying your life on your back) and finally decided to turn around. I would now like to admit (or confess?) that I was the one leading us.

We retraced our steps, now rhythmically slapping our extremities as we passed through Mosquito City. When we reached the infamous intersection, I decided that we should go right instead. It seemed sensible! My dear hiking buddy consented and we continued on. At this point, I even had my phone GPS out with the Appalachian Trail pulled up. This time, we were on a wide grassy track leading up and away from town. Things were looking better. But the sun had not lessened in its intensity. Sweat burned our eyes and soaked our socks. I’d say about an hour had passed at this point. The track grew steeper and became rocky. Not normal rocks, but pit gravel that you see on driveways. Something was not right. Still no white blazes. Do you remember the movie “Groundhog Day”? The entire film is basically Bill Murray waking up to the same day everyday. Well, the aggravation we were experiencing may not have been as animated but boy was it close. An hour and a half had passed and we could still hear people mowing their lawns. We again turned around. This time, Kat led us back down the path with my sweaty, directionally challenged self in tow. When we reached the original intersection, instead of choosing a different track, Kat kept going, convinced that we had passed it earlier on. Five minutes later, we spied a dirt path leading into the woods. There, painted carefully, almost glowing in the sunlight, was a white blaze. We spent the next several hours traveling 2 miles up close to 3,000 vertical feet to reach our blessed shelter. In between gasping for breath and gulping down snacks, we couldn’t help but laugh. In the end, we had travelled far more than the distance intended, bearing almost twice the weight recommended up a section of the trail much steeper than we had expected. That night, relieved to be sitting again, Kat and (newly dubbed) GPS celebrated their first full day on the trail with hot cocoa and partially cooked mac n’ cheese.

My name is Corinne, but you can call me Cori. I am a 25 year old piano technician and bagpiper finally realizing a childhood dream of thru-hiking the AT. I love music, literature, hot chocolate and laughing. I hope to emerge from this journey of a lifetime (at least) alive, wiser, stronger and with tons of great stories to tell.