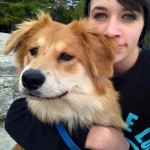 Why I’ve chosen to do an ultralite thru-hike

We’ll get to my reasons, but first…

A bit about me. 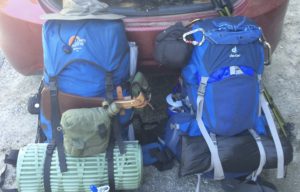 My Dad’s pack and mine, before we set out.

My name is Kai, I don’t want to choose my own trail name, and have yet to be given one.  I’m currently 19 years old, my thru-hike will begin shortly after my 20th birthday, and because I am not currently enrolled in college I will be able to take as much time as I want! I weigh around 110lbs, I just attempted my first backpacking trip in the 100 mile wilderness – along with my Dad, and dog – with a pack that weighed a little over 50lbs.  Today (August 31st), I got picked up after we’d had to leave the trail after only ~32 miles.  I know what you’re probably thinking, but no, it wasn’t because of my pack weight.

Why I left the trail

While carrying a pack that weighs about half your body weight is not something I would recommend, but it’s also not the reason I had to bail.  In fact, bailing had nothing to do with me at all, not even after bruising the cartilage in my knee (for the fourth time) three days before I set out on the trail, or rolling my ankle on the third day of our trip while hiking.

Four months ago my now 17 month old Golden Retriever/Australian Shepherd puppy, Cheyenne, had a knee surgery for a “Patella Luxation”. 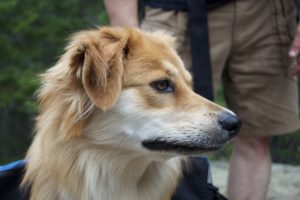 Basically, the vet told me that the ridge on her shin bone developed too far to one side rather than centered, which could cause her kneecap to be pulled out of place often, unless fixed surgically.  My plan – ever since adopting her – was to bring her on my thru-hike, so other than the obvious concerns like, is she going to be okay and able to walk, I also had “what if she can never do any sort of even semi-intense hiking again?” floating through my mind.

The vet cleared her for this trip, and my thru-hike a month after her surgery.

Cheyenne is, and always has been, a very nervous dog, so after a few days she had not been sleeping very well because the sounds of loons (which we don’t have at our house near the ocean in Southern Maine) freaked her out, but she also started limping.  Now, she’d done some fairly intense hikes with a couple pounds on her back before and been fine, but never for more than 6 hours in a day, multiple days in a row.  She’d started the wilderness with 8lbs., carrying only her own food, plus collapsable dishes, and a stuffed toy.

By the fourth day she was napping every time we stopped for even just a drink of water, and was limping most of the time, so I decided to call it, for her sake.  We ended up staying the night at Whitehouse Landing (which was awesome, and the people running it were very nice), and getting picked up there the next morning.

Okay, but why did that inspire the plan for ultralite hiking?

There were a couple of things that made me decide to plan ultralite for next summer.  Including meeting one of the happiest and most energetic seeming thru-hikers I saw, whose pack weighed only 7lbs!!!

We met many thru-hikers, section hikers, 100 milers, and even one person that had been dropped off in the middle of the wilderness who was only doing like 50 miles.  The ultra-ultralite setup was the one that really inspired me gearwise.  I had been buying ultralite gear in the beginning anyway, because I’m fairly small and was afraid I wouldn’t be able to carry much.  Now I know I can carry a lot, but I also don’t think that’ll be as much fun.  Why would I plan to hike over 2000 miles if I’m not going to make it as much fun as possible?!

Cheyenne is a 45-50lbs dog, just carrying her food she should be okay, once she’s had a bit more than 4 months recovery time for her knee.  It may have been my own fault, the vet said she would be fine as long as she was walking, and hiking a lot beforehand, but I should have held off on making her carry all of her own food.  Once we really start our thru-hike having my parents just come pick her up won’t always be an option, I’ll need to be able to carry her stuff in a worst case scenario.  And hey, in a reversed scenario where she’s fine, if my pack only weighs 15lbs she can carry my stuff! (Kidding! 🙂 )

For this trip we were on a time crunch

With both my Dad and I having to go back to work two weeks after we left we couldn’t afford a zero day for her.  We will be going back to do a few day hikes over the next week without her.

Because we’ll have no time constraint, and little money constraint if my plans work out while thru-hiking, a zero day to rest both of our bad knees will be an option as often as necessary.  Like I told my Dad, and how I believe thru-hiking, and hiking in general with a dog should be: My dog is my top concern because she can’t vocalize when she needs to stop, it doesn’t matter how good I’m feeling, if my dog seems like she has to leave the trail I’m going to make sure she gets off before getting hurt or really sick.  The trail will be there for another attempt later on, I want to make sure my dog will be healthy for a next attempt, too.

I did learn a lot from this trip, which I will gladly share for others to learn from, or laugh at, later on 🙂

Hi there! I'm Kai, I am an adventurer, and an aspiring travel blogger/photographer who currently resides in Southern Maine. I am going to attempt an ultralite SOBO thru-hike of the AT, starting about a month after my 20th birthday in July 2017, with my dog, Cheyenne, joining me for as much of the trail as possible. The ultimate goal is to hike over 2000 miles, and to have as much fun, and as many new experiences as possible in the process!