Wilderness of Despair – A Summit of Hope

The first time I felt a desire to quit my hike was on the climb up Chairback Mountain.

I already hiked most of the distance, and I was sitting about a tenth of a mile from the top of the mountain. From there begins a rock climb to the summit. At this point, you cease hiking and begin rock climbing. I stood there staring up at the rocks and I felt this rolling wave of depression and exhaustion. I leaned on my trekking poles, bowed my head, and began to picture myself walking back down to the bottom of the mountain. There was a large parking area there, with several day hikers coming out to hike the Gulf Hagas trail, a loop trail viewing several waterfalls. I thought I could get a ride from one of them to the closest town, and from there work on arrangements to get home. 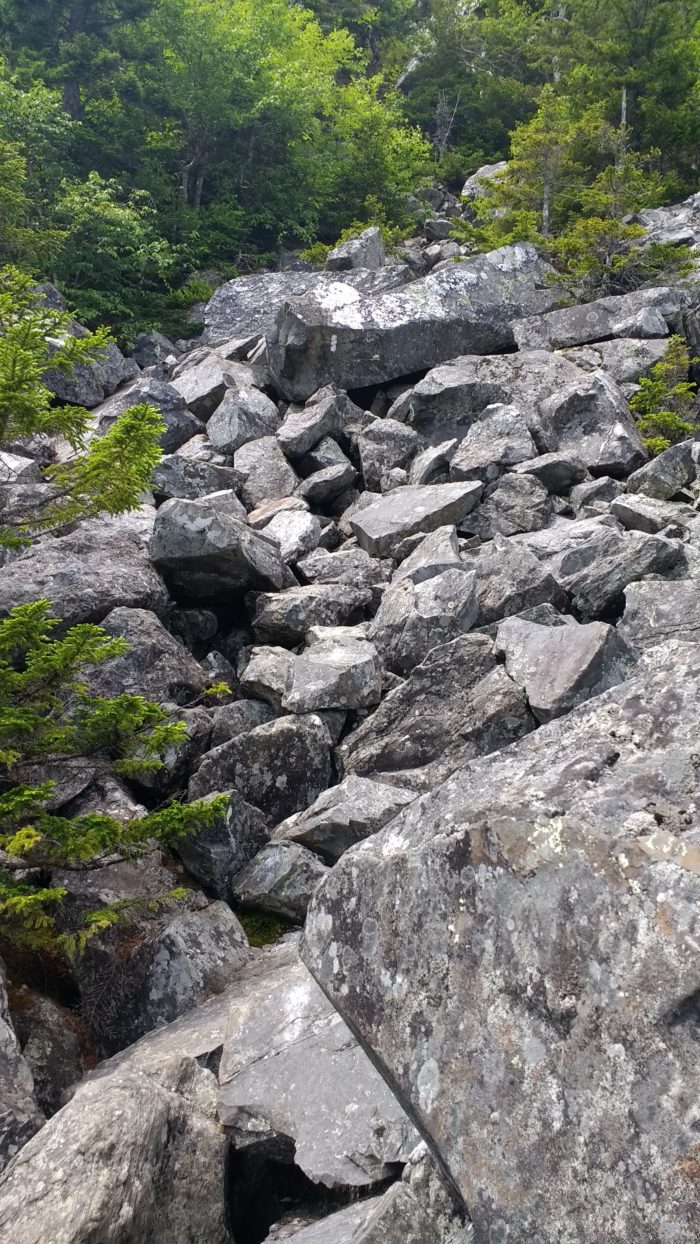 This nadir in my mood had been building for a while now. The 100 Mile Wilderness had not been particularly kind to me. The first 30 miles or so is considered “flat” but still had a couple small climbs, including Nesuntabunt Mountain, which sits at a mere 1,549 feet. What it has instead is bogs and swamps, breeding grounds for the densest clouds of mosquitoes I have ever seen. I also spent a few days in the rain, increasing the mud factor and causing so much slipping and sliding that my legs and arms seem to spontaneously sprout cuts and bruises each morning. I honestly don’t think I spent a single day there without some mix of mud and blood covering some portion of my skin. 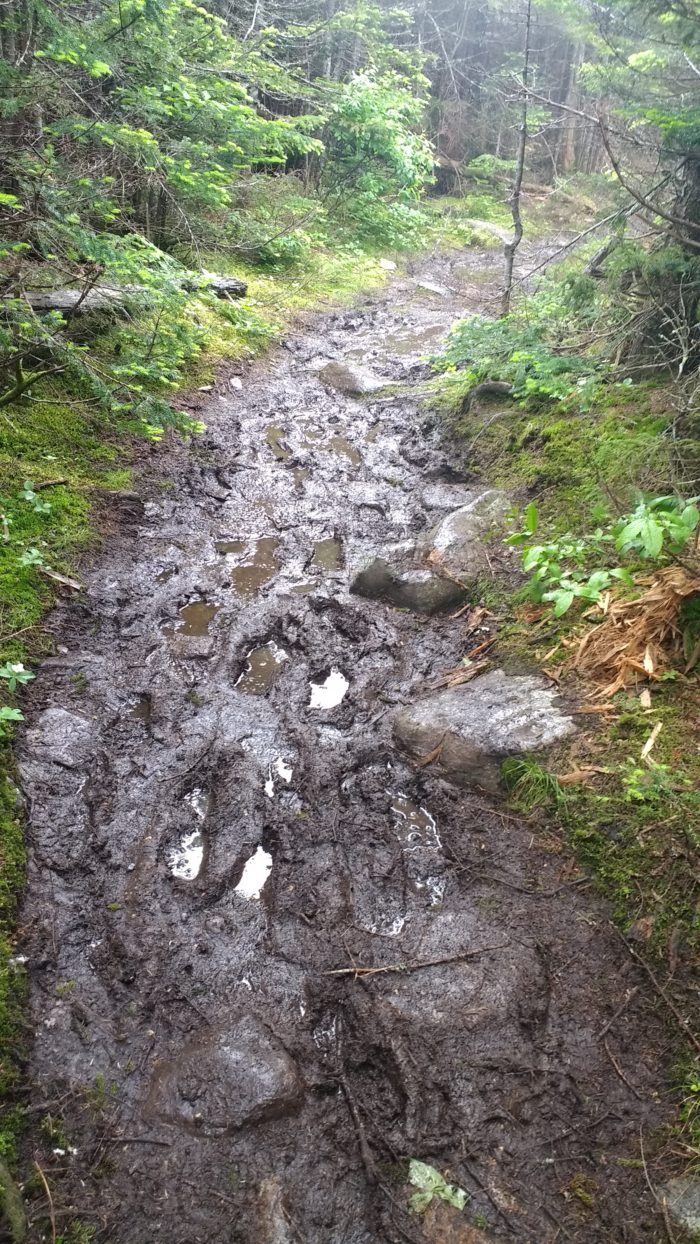 Speaking of falls, the aforementioned Nesuntabunt Mountain was the site of one of the more fraught experiences I had in the Wilderness. I had started up the mountain in the mid afternoon. I saw a nice stealth spot on the way up, but at the time I felt it was too early to stop. I kept going, I had looked at the topographical map and thought the summit should have another stealth spot or two. As I climbed, the clouds began to gather and get darker. I was going much slower than I’d expected. While the climb wasn’t high in comparison to the rest of the AT, this was still the biggest climb I’d seen since leaving Katahdin. I finally reached the summit around 6 p.m., and sure enough there was indeed a sweet stealth spot there, but it was already taken by another hiker. I passed on, hoping to reach a shelter at the bottom of the mountain. At this point, the rain began as the sun was setting. It poured on as I slipped and slid downhill in the dark. My headlamp batteries died, but I fortunately had a flashlight as well. (a redundancy I normally wouldn’t have, but I discovered a few days in that I’d stowed the flashlight at some point over the winter, not having another place for it at home and forgotten about it) I kept hoping I’d find a tent spot on my way down, but I had no luck. At one point, I slipped and fell into a creek next to the trail. I flailed back and forth for several minutes trying to get up, but the weight of my pack kept me from getting a good position. In my panic, I didn’t think to release the pack straps. I reached out for hand holds but everything I grabbed – tree branches, rocks, or mossy ground – ripped up in my hands. At some point I dropped my flashlight in the water and it somehow switched to the “strobe” setting, which simply added to the cinematic panic I was experiencing, flashing back and forth into blind darkness. I heard myself scream at some point and knew that the odds of another hiker passing were low. Finally, I was able to rock back and forth to get back to a sitting position, then stand. I finished my descent and found a campsite. Between this and my bad experience on Katahdin several days before, going forward I’ve found myself stopping early in the day out of fear of being caught in another late night hike. 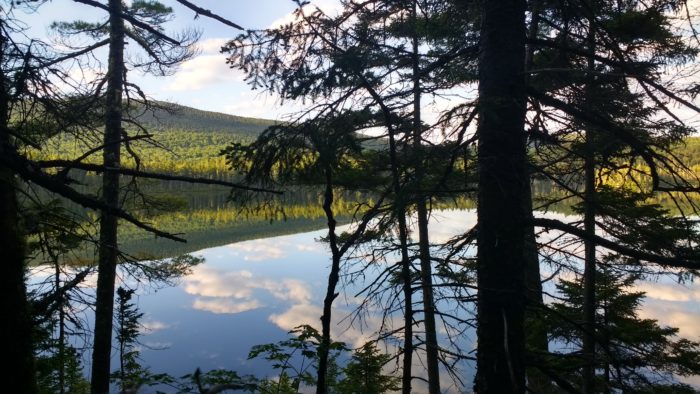 Let’s cheer up a bit

There were a few moments of relief in the Wilderness as well. Almost halfway through, a side trail leads to a small boat dock where a radio can be used to call Bill, who along with his wife Linda owns White House Landing. He picks up hikers from there in his boat, then takes you back to the hostel, an old logging camp with a bunkhouse, shower, and hot food. After the disappointment I’d experienced in the previous days, this chance to find some rest away from the Trail was a wonderful respite, but the joy faded almost as soon as I left. There’s something disheartening about getting cleaned up, only to be covered in mud again within minutes of setting back out. 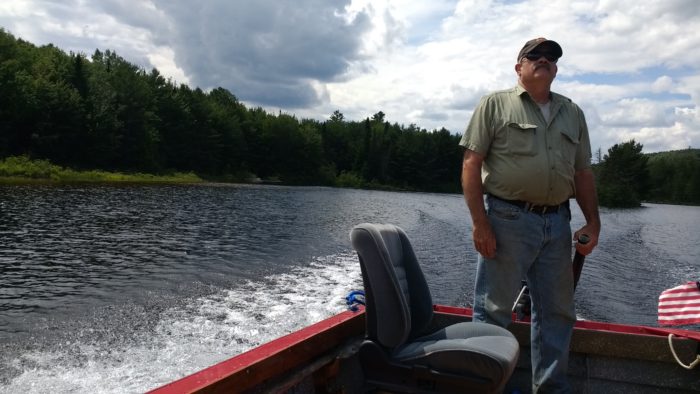 My equipment has felt the bumps and slips as well. For the most part, I’m hiking with the same gear I took last summer, trusting that the items that carried me before would continue to do so. However, time has taken its toll on a few things. My sleeping bag now has a busted zipper and a small tear I’m hoping won’t expand. My trekking poles are now both bent due to random stumbles. One of the few new items I picked up was a Katadyn Be Free water filter. While I was extremely happy with this item at first, it doesn’t have the reliability my old Sawyer Squeeze did. The bottle itself has sprung a few pinhole sized leaks, and despite regular rinsing the flow of the filter has slowed down significantly within only a few weeks of use. The brand new Hoka trail runners I’d bought were shredded within a week of setting out. My toes stuck out the side, and the destroyed tread was a mirror of my worn out self. 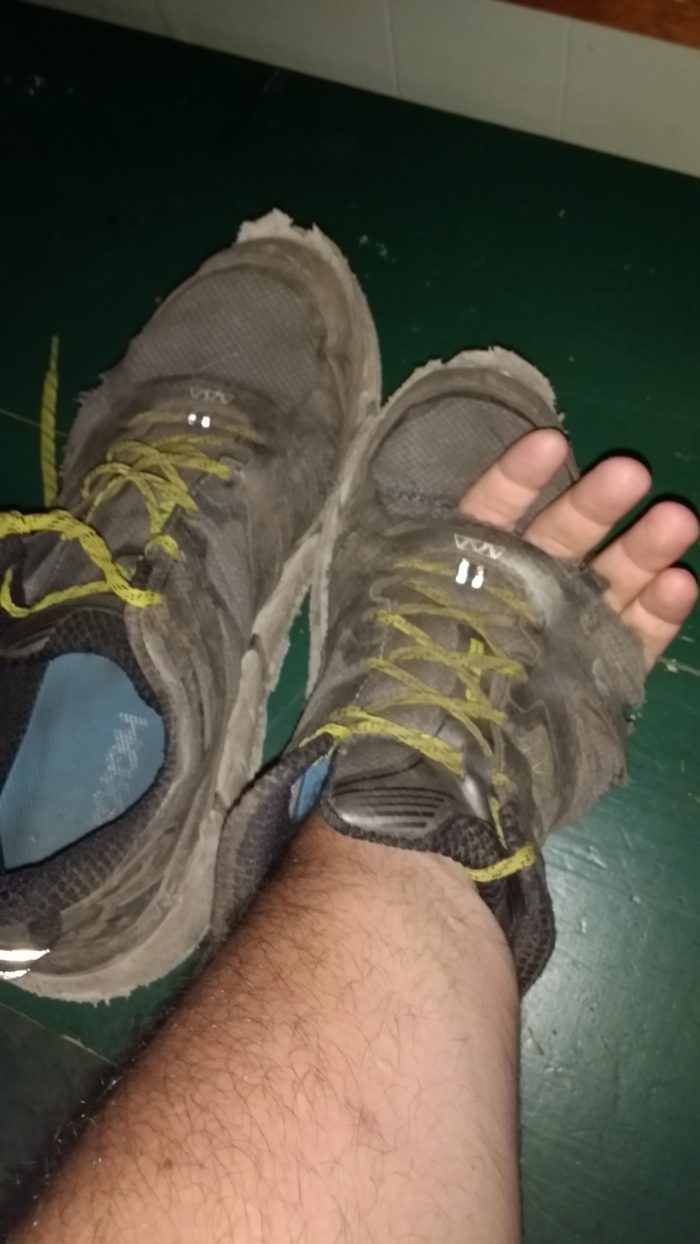 All this lead me back to that moment on Chairback. I stared at the rocks and felt my heart cloud over. I wallowed for that moment in my despair. I pictured myself giving up and having all the conversations back home that would essentially mean admitting I wasn’t able to keep myself going. Then I looked back up and prayed. 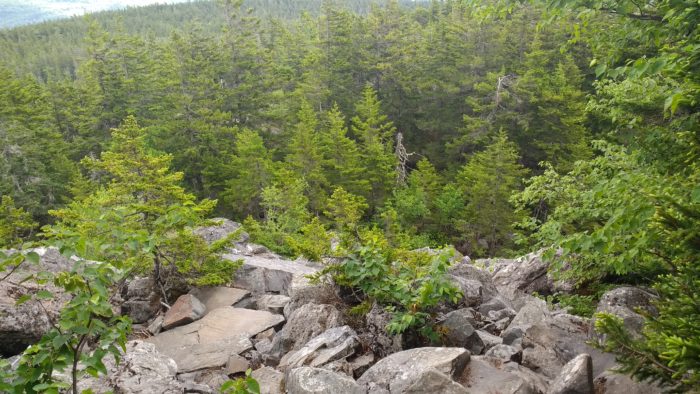 More motivation than a crucifix, I think

I regularly attend church back home, but out here on the trail I download sermons from a few different churches whenever I’m in town and celebrate by myself. One church I follow is the Blue Ocean Faith of Ann Arbor, and a message by pastor Ken Wilson a few weeks ago on Psalm 23 and it came back to me in that moment. (you can listen to it here) I resolved I would continue and began the climb, praying aloud alternating between the Our Father and reciting Psalm 23 from my poor shoddy memory. The rocks were difficult, but I found as I ascended the way was not the impossibility I’d imagined it to be. Once or twice I made the mistake of looking back, assaulting myself with vertigo, but I pressed on. The summit finally appeared and I stood proudly, thanking God that I had made it, not through the difficult terrain but my own doubt and despair. The view was sweeter than I could have expected, and the hope was more relief than cold water on a hot day. 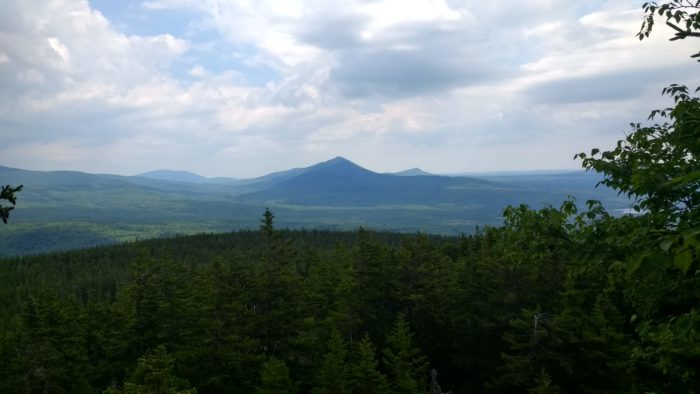 I’m not sure if I’m over some of that doubt, the rest of the range and the 100 Mile Wilderness was still a challenge, and other dark moments have come and gone. But each day I hope I’m getting better at pressing forward, hiking on. At this point I’ve gotten to Stratton, and look at the elevation profile for what’s ahead and I still feel lumps of dread in my throat, but for the moment I’m putting my shoes on each morning and one foot in front of the other. I pray. I hope. I cry.

But through it all, I continue.