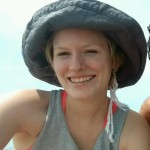 I am sure I’m not the only female who has repeatedly heard the same discerning comments when sharing the news of an upcoming hike. I always get the same “Who are you going with?” question. I have heard it so many times I figured there had to be a reason why nobody believed or thought a woman could hike, especially alone. After racking my brain for months, here are three logical reasons I came up with.

1. Women can’t pee with their pants on

Did you know there are super humans that can pee while standing? Yes. They exist. They are the ones with faces hidden behind a furry wall of masculinity. All they gotta do is unzip, and whiz. Peed and relieved. Ladies? Unzip AND unbutton, drag the pants down, and uncomfortably squat. You have to master this act. Know the angle at which you have to position your body so that you don’t (completely) saturate your pants and shoes. Males are the blessed ones that don’t have to worry about where or what their pee will splatter on. Since people pee an average of six to eight times a day, a woman on a five month thru hike is probably going to get urine on her boots over 1,050 times. And I’ll stop here before before I get into the menstrual cycle, cause we all know women are useless on their periods!

Women’s hips are sacred. They are designed to accommodate and shift for a living, growing fetus. Men’s hips don’t have to spread open to create the birth canal. Men can toss on their pack and strap on the hip belt without a further thought. But women, we should think about it. Really think about it. This is a 4-6 month long commitment. Ask yourselves: am I prepared? Are my hips and back ready for this extra weight? Do I understand I will be putting 30lbs+ on my body? And do I understand that I can voluntarily take this weight on and off as I please? Pregnancy is what females are built for. It should be no surprise that people are going to doubt a woman’s ability to endure the challenging expedition that is thru hiking the Appalachian trail. Especially since only hundreds of thousands of women a day are strong enough go through child birth!

Unfortunately the majority of woman aren’t born with the magical power of being able to grow a beard. In fact, most of the places woman do grow hair that’s not on their head is removed in whatever way possible. Seriously, woman are drastic when it comes to hair removal. I mean, who on this planet other than women would willingly pay another being to apply hot wax to the most private and sensitive part of their body and then have it ripped off, painfully yanking the hair right out of its folicals? And it doesn’t end there. Razor blades, lasers, chemical filled creams that literally just take the hair right off your skin. Males on the other hand embrace their excess hair growth, that’s what make them so manly and capable! I mean c’mon, have you seen The Real Hiking Viking? And you know they don’t just have burly beards and mustaches. They grow duck tails, goatees, handlebars, french forks, chin straps, soul patches, what is it about this facial hair phenomenon that gives men the ability to hike without being convinced to take a knife and pepper spray? Maybe if I had just grown some muttonchops I wouldn’t have so many people trying to convince me to get my license to carry.

*Disclaimer: this post is sarcastic and I do not believe any of the points I made, and I am not trying to offend anyone of any specific gender. I just wanted to let off some steam in my favorite way: humor. I know people are just concerned for my safety as they would be for anyone attempting this journey, male/female, young/old, solo/with a partner or group. Thanks for reading, hope I got at least one person to chuckle. We are all on this journey together.*

Yes I'm from Boston, no I don't have the accent. In 1995 I was summoned to the earth to do my part spreading peace and love to fellow humans. I'm an animal/nature fanatic with a strong belief in the universes energies. In 2017 I'll be on the Appalachian Trail, probably trying to grow my own vegetables in my backpack.