Before I start: White Mountains Part 2 was buried in my last blog and was not sent out as it’s own separate blog on the email, and even my Dad missed it! So have a look to read it (and see the photos)–White Mountains part 2 was special  so go back and check it out! –it was posted on 9/15/16! Thanks.

Woodstock to Shrewsbury
The look-out Tower

I didn’t really know how to get back to where I left off on the trail other than backtracking and hitchhiking. Luckily, I had a family member in the area and she offered to give me a lift to the trail and pick me up in a few days (thanks Doris!). The trail went through a beautiful meadow a while before re-entering the woods. I was going to try and get in some miles in but then I stopped to talk to several people and each person told me I should stay at the look-out tower. It sounded fun so I loaded up with water for the night and made my way there. The tower is comprised of a building with two floors with a platform on the roof accessible via a ladder. I set up my sleeping pad inside the building and then climbed up the ladder for a 360 degree view of the mountains surrounding. Vermont has gentle slopes that remind me of home and in the distance we saw tall peaks that must be the rocky Whites. A few other hikers were there including some NOBOs, a flip called Scooch, and a SOBO named Horizon (I’d seen him somewhere before). I watched the sunset from on top and shared bourbon with the other folks staying in the cabin that evening. 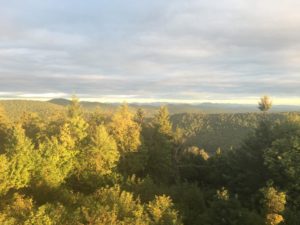 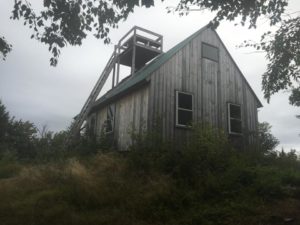 Getting to Kent Pond

I was delighted to wake up to the sunrise and climbed up the platform to view the mountains in the early light. The mist filled the valleys and orange colors hung above. My iPhone couldn’t do the scene justice. I packed up and began my day feeling good. I stopped to get water and when I got up from where I was sitting I was suddenly itchy everywhere. I tried to walk a little but my legs were breaking out in hives and it was the kind of itch that makes you want to scream. I called my mother and she told me to take a Benadryl. This seemed to work pretty instantaneously. It put me in a very sleepy state as I trudged up hills dreaming of hot sandwiches. Pat and I had eaten at the Yellow Deli (because everyone on the trail had been talking it up for weeks) and I was dreaming of a very specific sandwich, the Deli Rose. I stopped for lunch and did something I never do, cook a hot lunch. It was super filling and helped subside my extremely weird hunger. I was feeling more awake as I climbed up the last big mountain of the day. I had a goal to make it back to Kent pond which Pat and I had visited during our weekend together. It was still some miles away but I pushed on and got my headlight out when it got dark. With just a little light left in the sky I arrived at Kent Pond and set up my tent right next to the shore. It wasn’t going to rain so I left my rain fly off so I could see the stars that night. 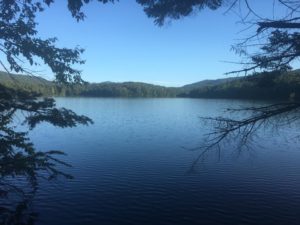 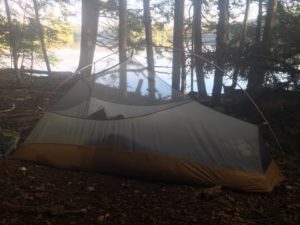 I woke up to see the light hitting the pond and fog slowly lifting. I hung out in my tent enjoying the view from the comfort of my sleeping bag. Eventually, I packed up and headed south and soon passed through Gifford Woods State Park where I had camped for three days with Pat. The trail headed uphill and joined the Long Trail which I’d be on for the next hundred miles. I had a little break in climbing and then I began the ascent up Killington Peak:nmy last 4000 footer (if I took the side trail to the top, which I did). I was looking forward to eating at the restaurant there and maybe taking a ski lift for fun until I reached the shelter and heard from campers it closed at 4 pm. I checked the time, it was 5. I set up in the shelter (which was a building with a door) and took the blue blazed trail up to the summit where I could see Kent pond and the resort below. I headed back down and settled in to the shelter which I’d have to myself that night. 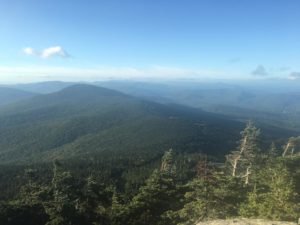 I was going to meet up with Doris Perry (BTW a Kuhl-Bella Sylva 3d cousin once removed (?)–who have land about 2 miles away from our lake in Pennsylvania) again the next day and had around 12 miles to get there. I was sleepy so I slept in and had a late start. I was worried about time until I realized how easy the terrain was and I was making really good time. I planned to stop at a stream for my lunch break where I’d only have 3 miles left and when I got there I noticed a cute sign nearby with the words “Trail Magic”. I got closer and read that there were sodas in the stream and to leave empty containers in the provided box (which had a poem enclosed). I was doubtful since most of the time when I get to a “soda cash” they’re all drunk but in the stream 10 full ones still lingered and one happened to be a root beer. It tasted great with lunch! Afterwards I finished the last few miles with not too much effort and met Doris an hour earlier than expected. She brought me back to the house where I met her husband George. Did I mention they have a hot tub? Nothing feels better on your body after hiking then a hot tub (especially if you throw your sore feet on the jets). After I showered we got some good Mexican food in the area. It was a such a nice evening (thanks again Doris and George!) In fact, they were so cool that I decided to stay the next day.

Doris helped me resupply the next morning in Rutland and per my request we stopped at the Yellow Deli for lunch (I had to get the Deli Rose again). I wanted to do a little hiking so she dropped me off to slack-pack six miles. It was a beautiful day and the walking was pretty easy. When I was almost done hiking I ran into Horizon at a overlook. A little later, at a gorge, I was delighted to find Dogood, and Midday. They were picking up trash on the trail and asked if we could dispose of it. Yes!  I headed back with Doris and got pizza with George. They have a pond in their back yard so I decided to go on an evening canoe ride which was beautiful. I was trying to get out of the boat to shore when the boat tipped and I fell in. I was soaked and scared there might be leaches on me but it was dark and I couldn’t see a thing. I struggled to get the water filled boat back on shore and then stumbled through the woods back to the house (I should have brought a light). When I returned to the house I immediately jumped in the hot tub and felt better. Their daughter Abigail arrived later with Jamie and we had a nice time chatting that evening. I’m so grateful for getting to know them and having a really fun time while I was there. 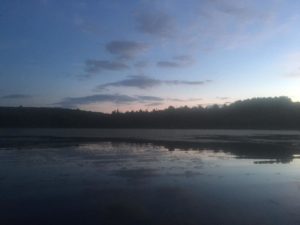 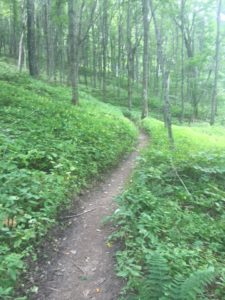