I woke briefly to Medicine Man and Birks packing up around 5am, then went back to sleep. We got up and headed out to the steep descent into Lincoln. I met some SOBOers on my way down and chatted about the huts. The terrain leveled out, and was actually semi flat, which was a huge change from the normal roller coaster. I passed my first hut of the Whites, but didn’t go inside. I ate some snacks outside and continued hiking. Not far from the hut was a beautiful lake with a backdrop of huge mountains. 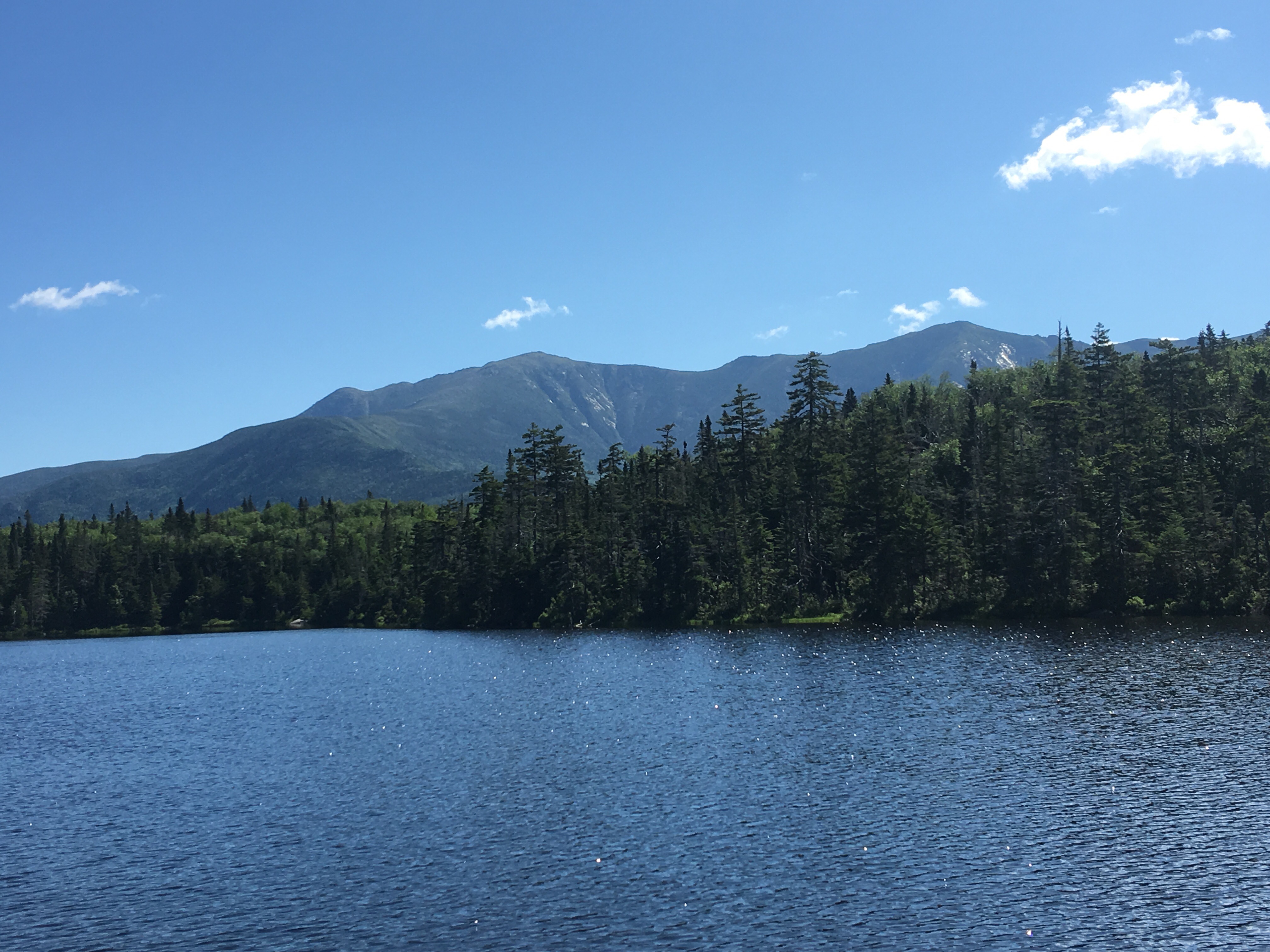 Lake down the hill from the hut 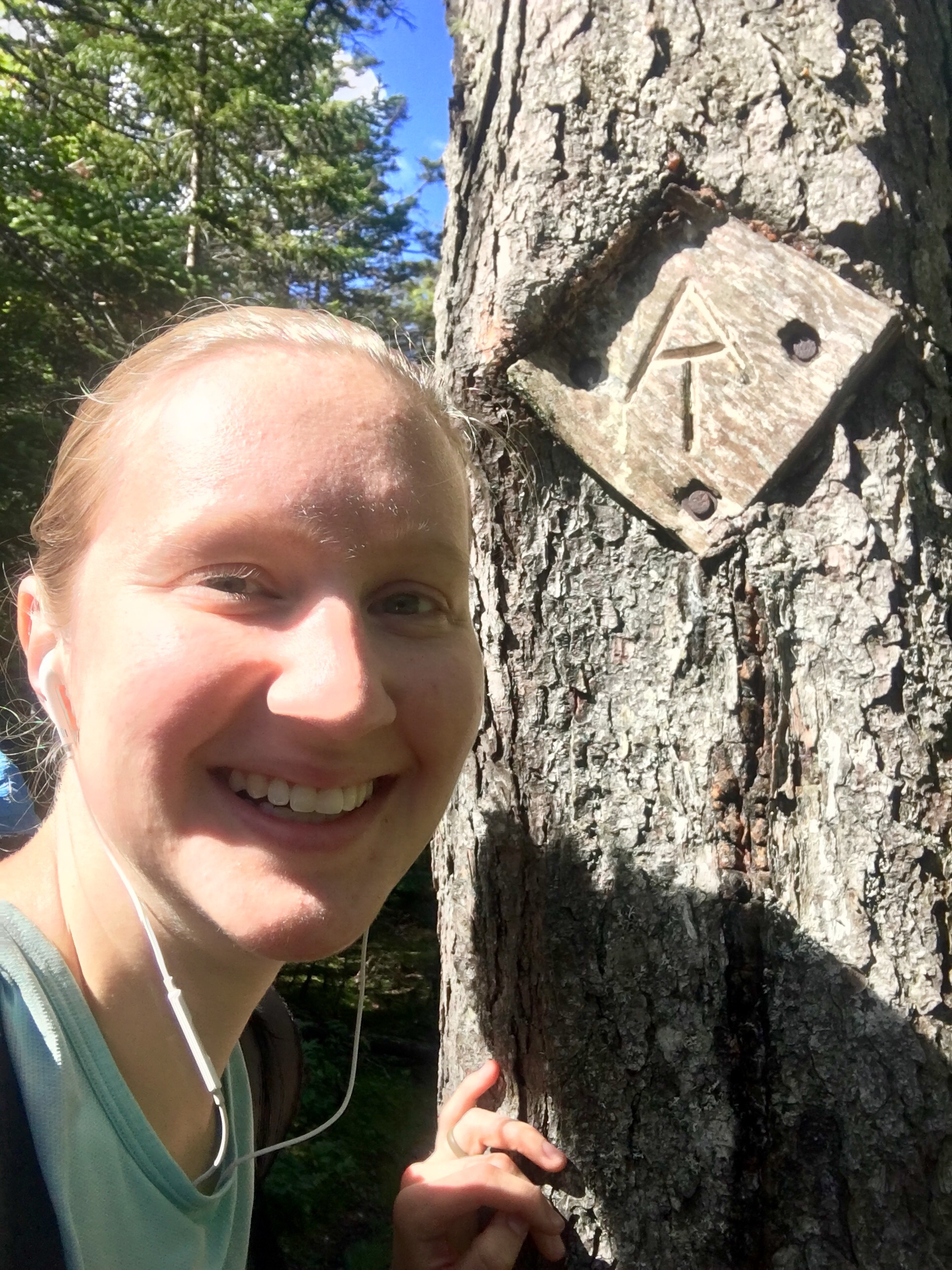 There were a few large streams to cross, and I met Rash and Piñata at one near the highway. We hitched easily into town to the Price Chopper. Our previous Price Chopper shopping experiences have been nice, but this one was tiny and had a sparse selection. We sat on the bench outside in the shade, putting our food away and eating lunch, and I charged my phone on the plug outside the laundromat next door. I’m getting better about not overbuying for the few days we resupply for.

We walked to the road near a gas station, and immediately got picked up as soon as we stuck our thumbs out. A man with a very nice pickup with leather seats and a veterans license plate picked us up. He took us to the trailhead and pulled off on the shoulder to let us out. We hiked up the climb to Franconia Ridge. It was less steep and less treacherous than Kinsman, thankfully. The path was wide and there were large rocks to step on to make the grade easier. 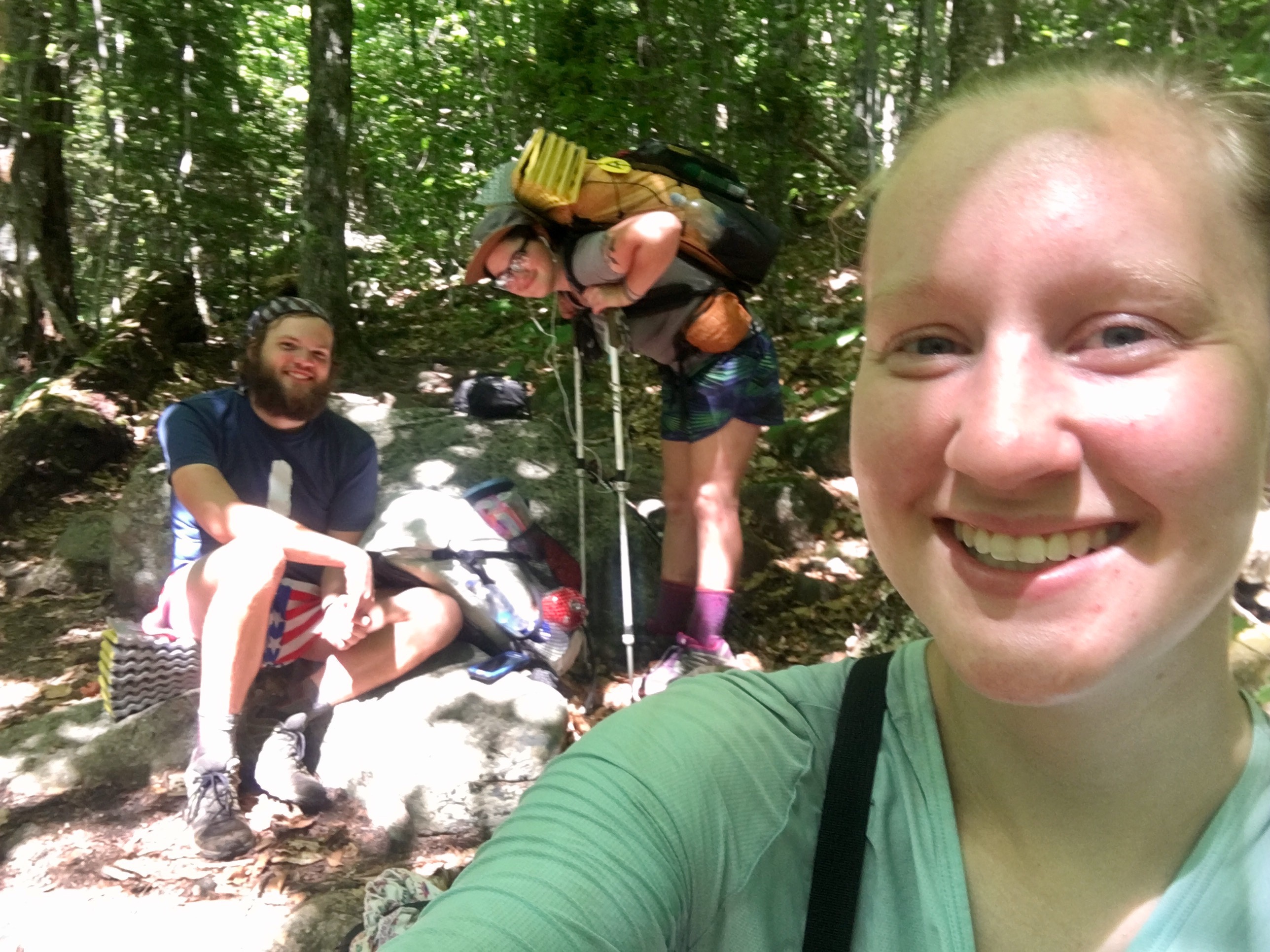 Taking a break up the climb

We leap frogged with 3 men doing a section hike and 2 Canadian girls. We didn’t have many more miles to do, so we took it easy. We came to a nice campsite with a caretaker. I stopped to get water at the bottom of the small hill where the caretaker’s cabin was, not knowing the water source was up the hill. Rash found me and showed me to the camp site.

We ate dinner with a group of 12-13 year old boys on a camping trip with their leader who was from Lyon, France. One of the boys, Daniel, had lots of questions for thru hikers, and was taking notes with a pen and paper. We turned in early, while it was still light out, and I relaxed in my hammock until it got dark. The caretaker came around to collect the camping fee and said he’d leave passes on his porch. 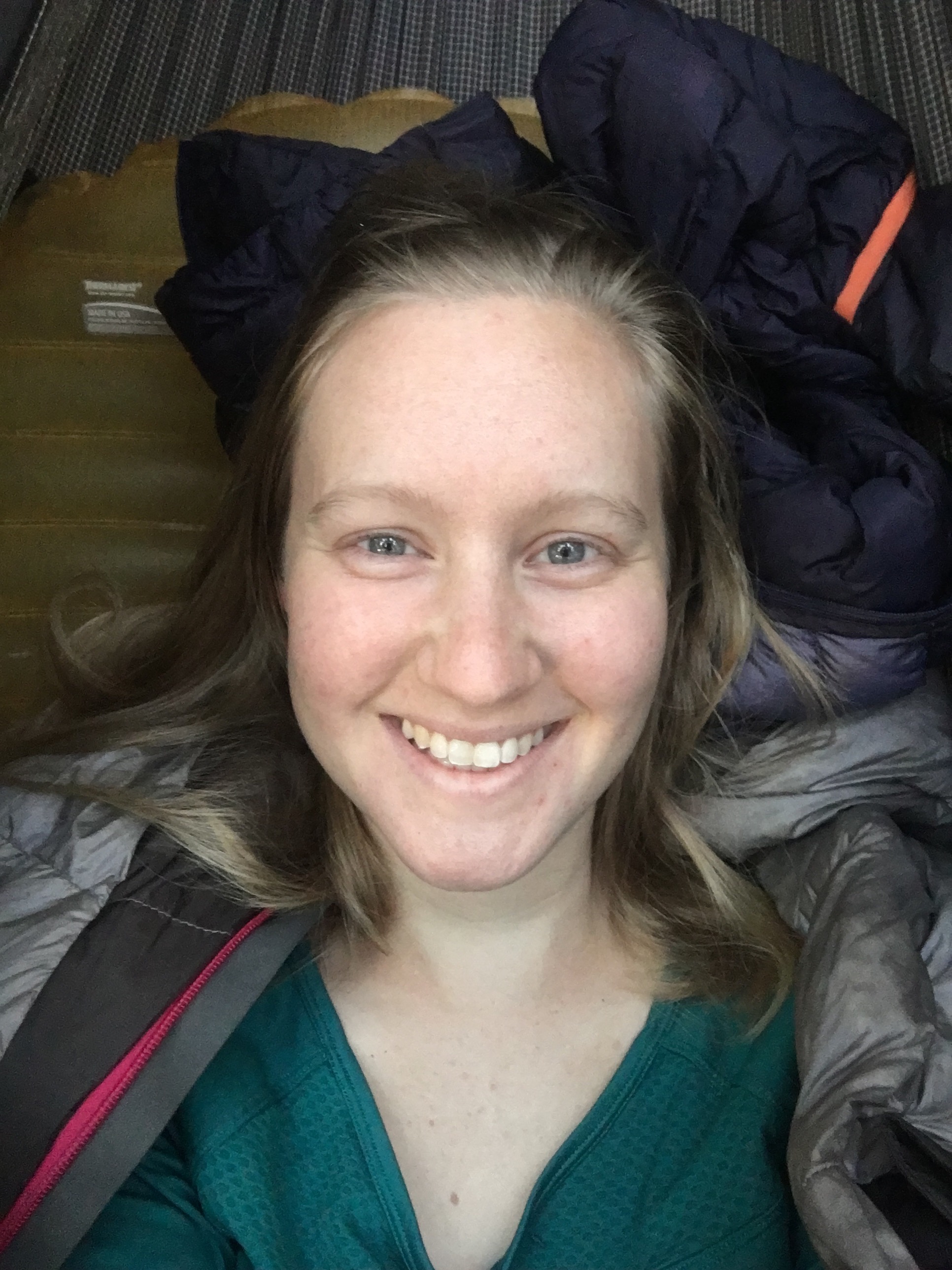 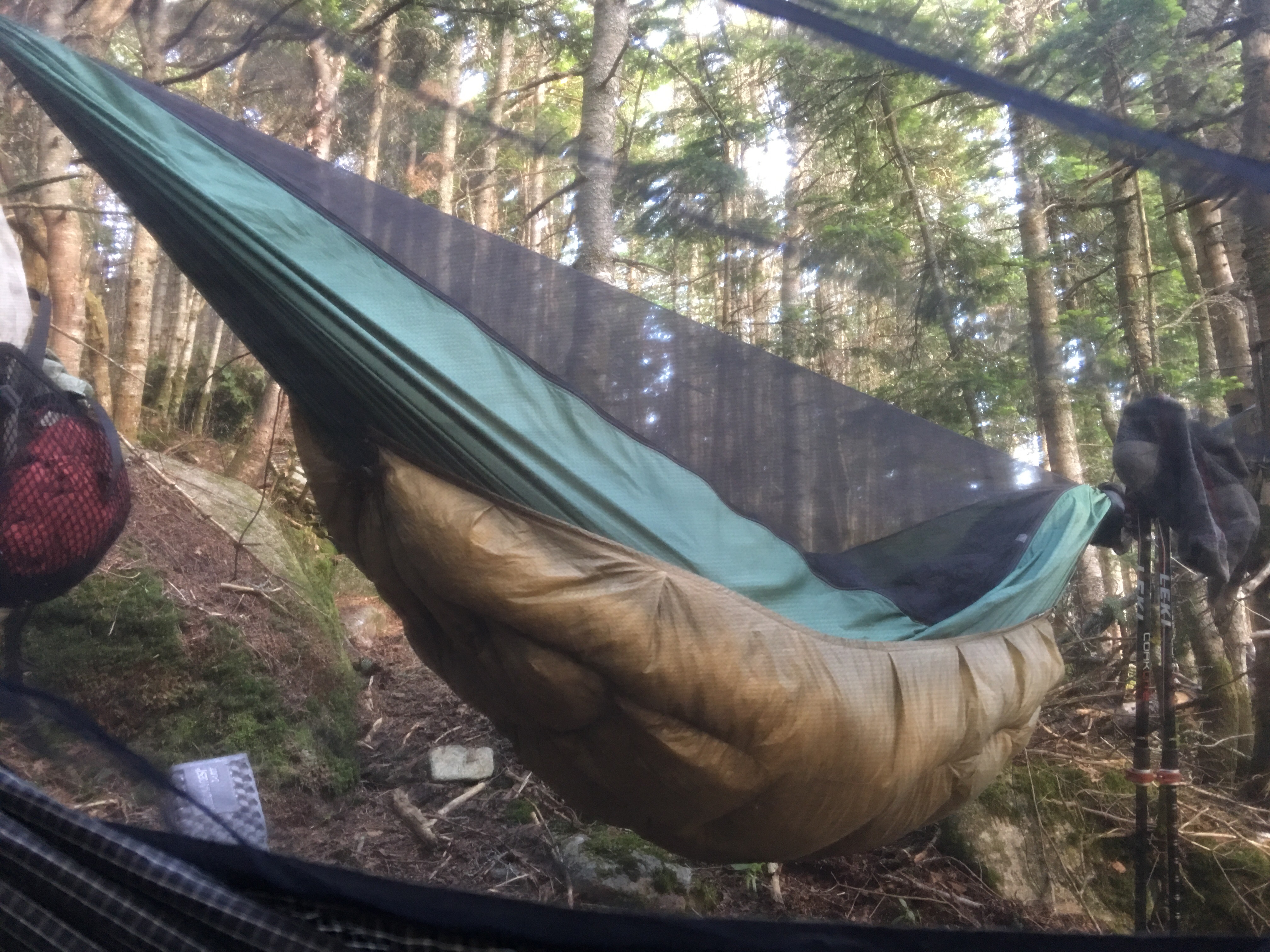 Rash in his hammock 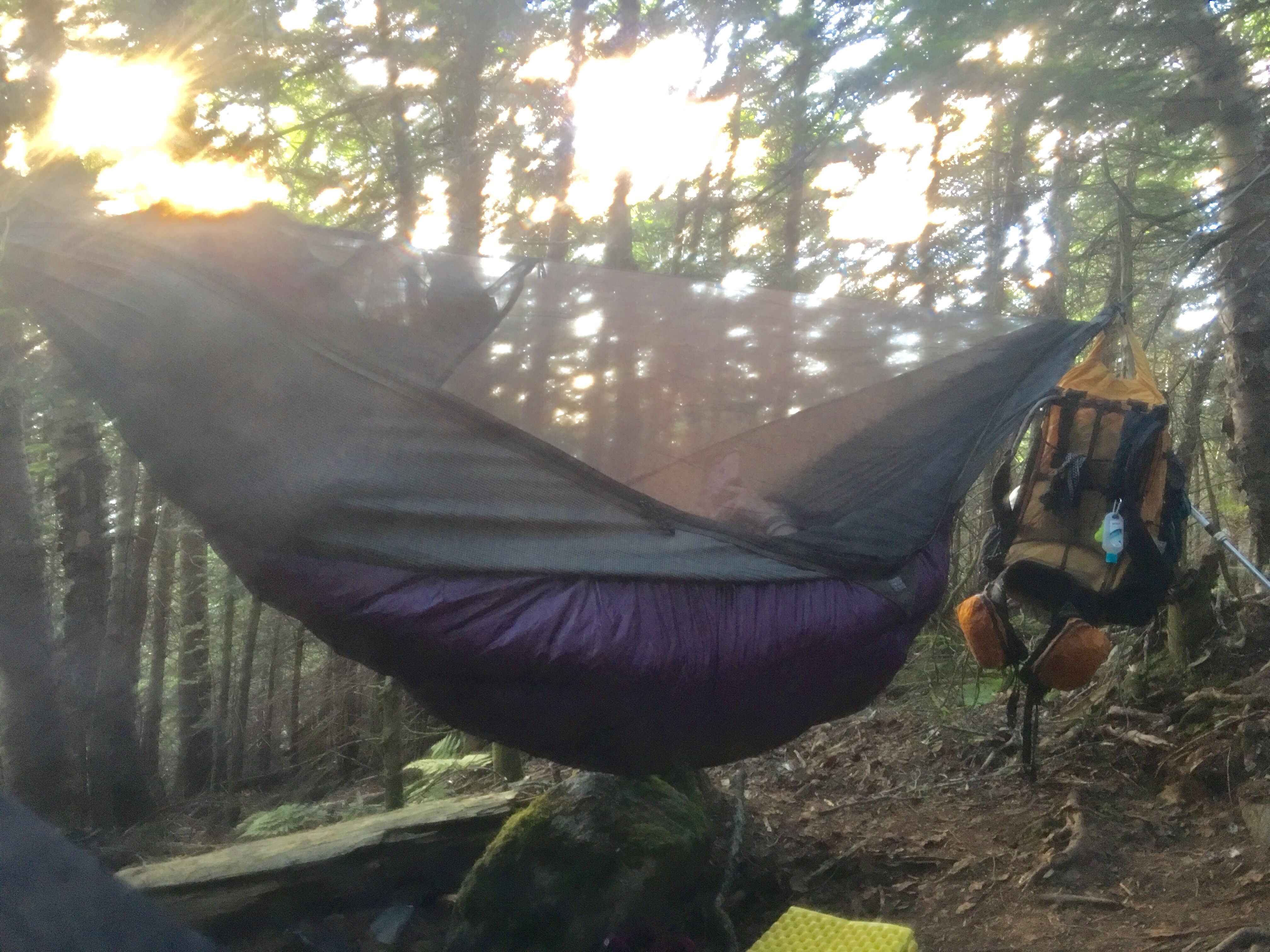 Piñata in her hammock

I woke up at 3:30am to Piñata sliding her snake skin on her hammock. I reluctantly got up and packed up. We got our food bags and ate a quick snack at the bear box in the dark. We made a group privy trip, and Rash hiked down the hill to get our passes the caretaker left on his porch. We hiked up the rest of the climb from the campsite, and had a portion of flat before going up Little Haystack mountain. The climb was short, but I was tired, and it was dark. We could see the sun peaking through the trees as we made the last climb to the top. We finally reached our goal, and we were rewarded with the most beautiful sunrise I’ve seen. 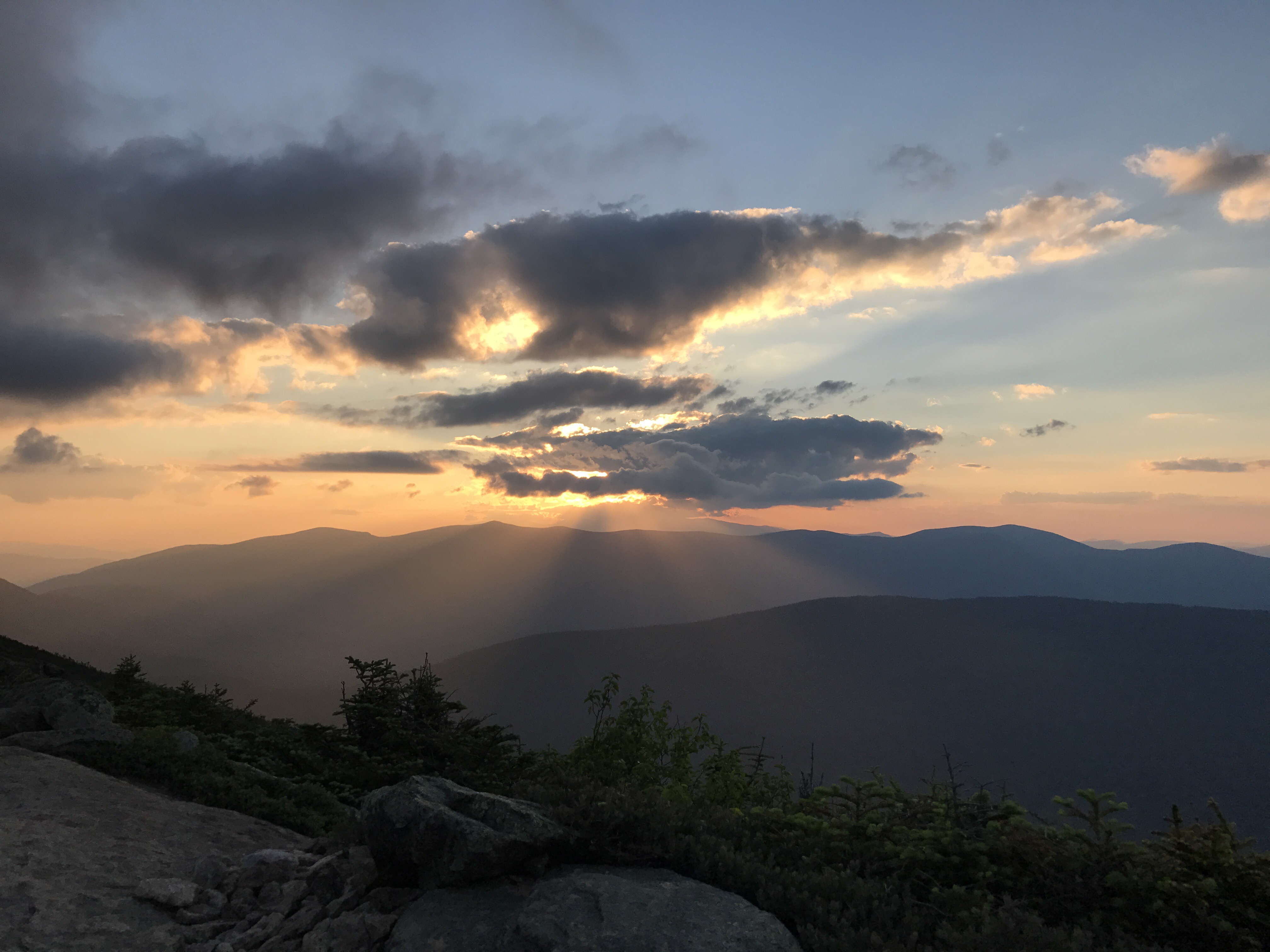 We relaxed on the mountain for a while, watching the sun rise above the clouds and the horizon. As soon as we stopped, the wind and the cold was bone chilling. I put on both my puffy jackets (down and synthetic), wrapped my legs in my rain jacket, and donned my hat and gloves in order to get toasty.

The next few miles were on the exposed ridge line, going over Mt Lincoln and Mt Lafayette on Franconia ridge. The views were spectacular, and the weather was perfect save for the occasional cloud. There were no trees for shelter, and I was grateful for the nice weather. We took a few more breaks, and descended into the trees. 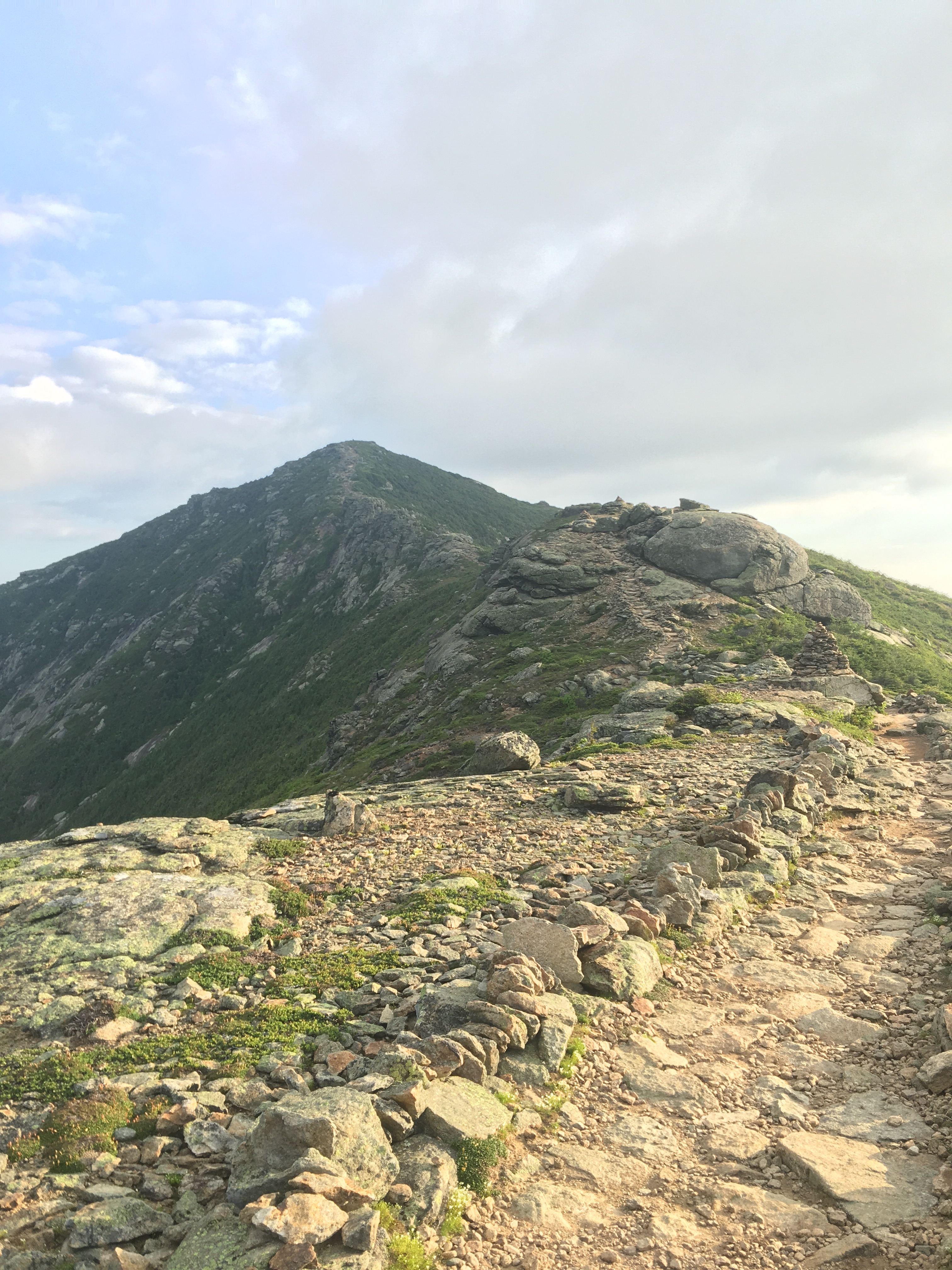 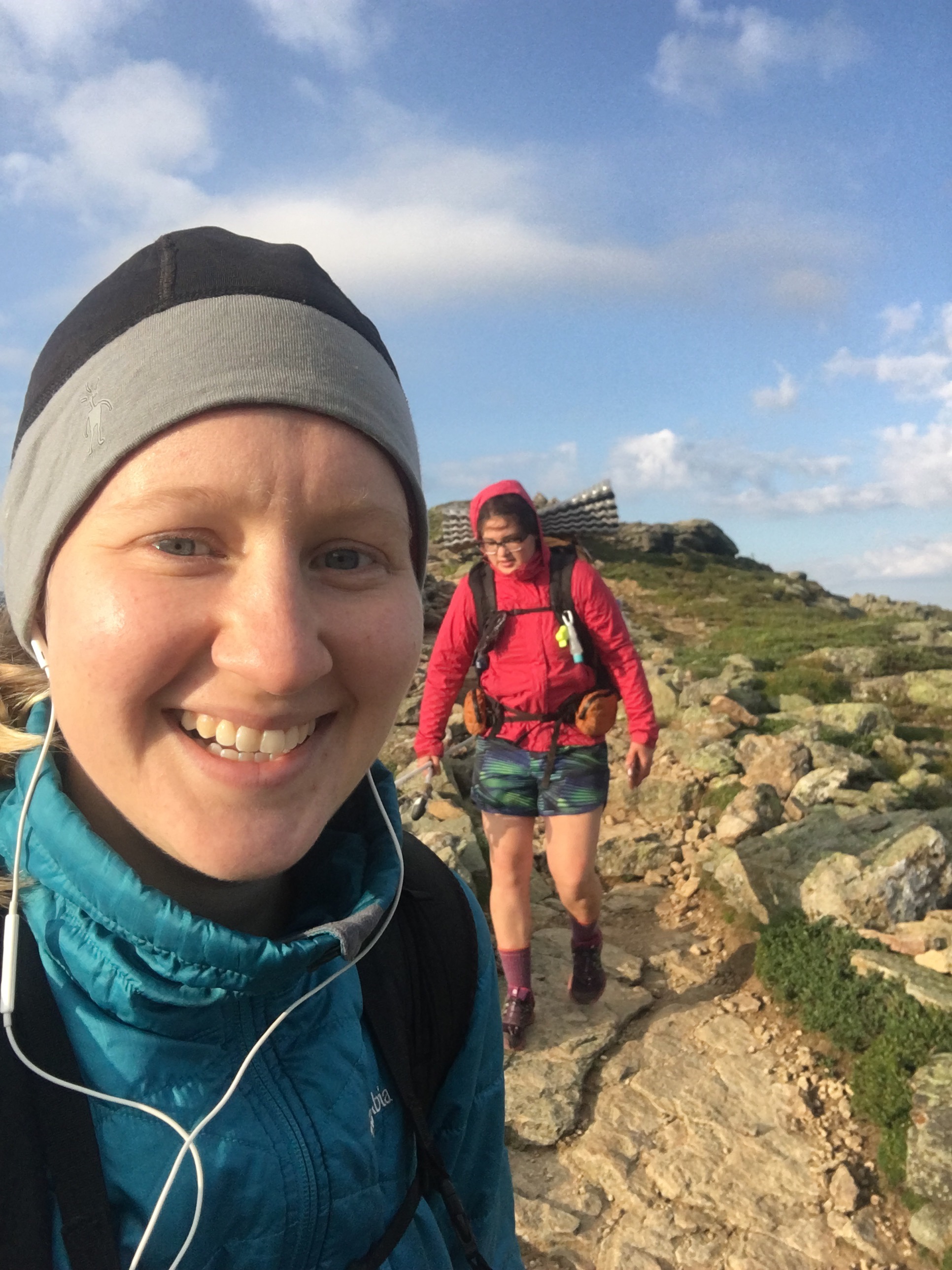 We stopped for another break, and made plans for a hotel tomorrow. The weather is calling for thunderstorms in 2 days, which is when we plan to go over Mt Washington and the 12 mile stretch above treeline, which would be dangerous in a thunderstorm. We booked the hotel for 2 days in anticipation of zeroing to wait out the weather. As we were making plans, a section hiker named Flicker passed us. She overheard us planning, and gave us her husband’s number to call for a possible shuttle.

The hike up to Mt Garfield was long and steep. The view at the top was 360 degrees and beautiful in all directions, but it was very windy and the summit was crowded with day hikers. I joined Rash and Piñata by a water source on the descent. The second half of the descent was extremely steep, and a stream/waterfall ran down the middle of the trail. It was rock climbing on wet rocks without ropes. Thankfully, we made it down in one piece.

I arrived at the hut first and found Birks, Flicker, and Medicine Man sitting inside. I joined them, and then asked the staff if there was work for stay available. They graciously gave us 3 work for stay options, even though it was 3pm and still early. Rash and Piñata arrived, and we settled in, talking to Birks and Flicker. We sat on a bench while the crowd ate dinner, and played a word game on Piñata’s phone. We were starving, and the food smelled so good. When they were done, we got a plateful of pasta with pesto, sweet bread and butter, potstickers, and potato dill soup. 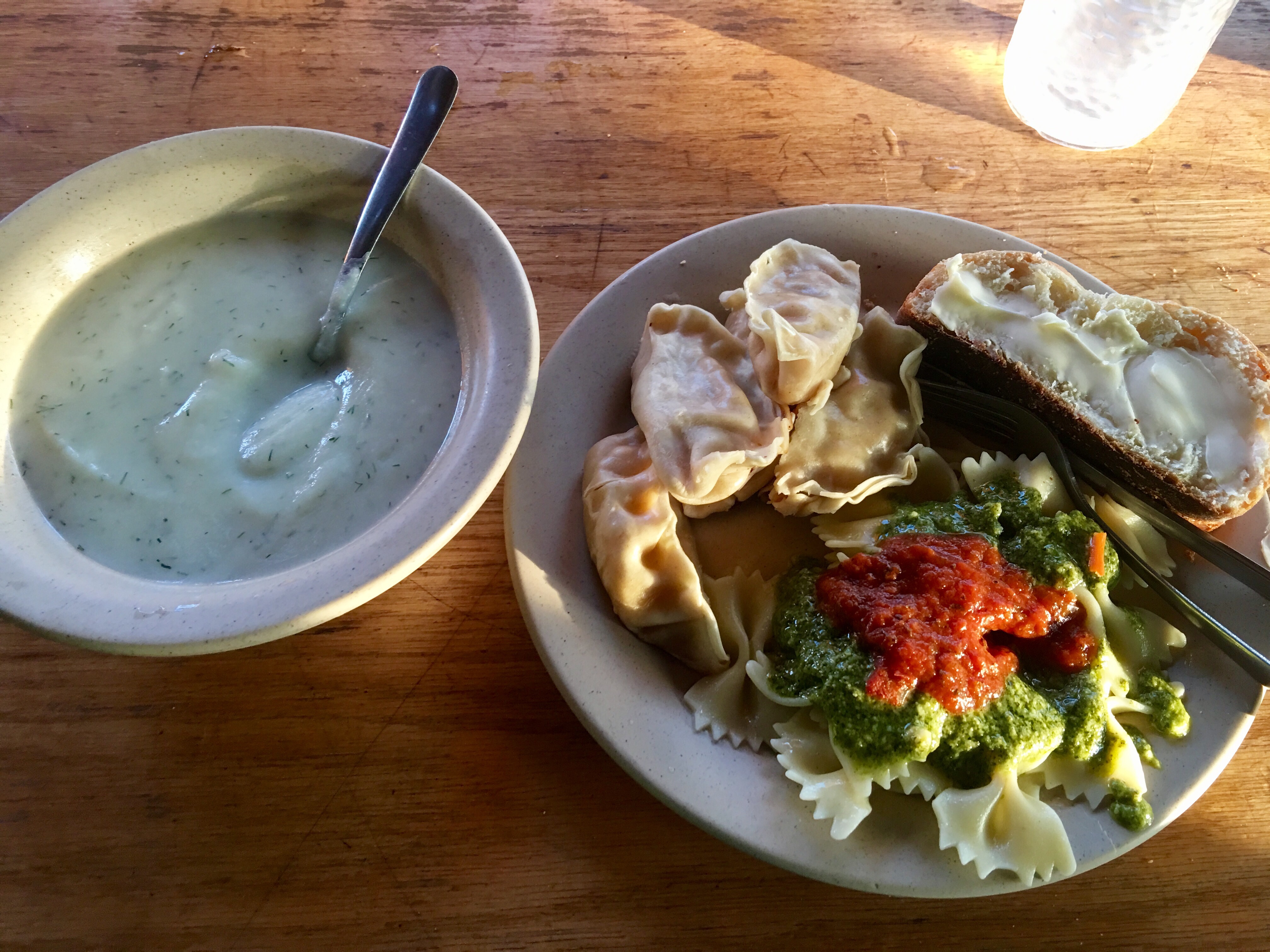 Food has never tasted so good

After dinner, we helped with dishes as part of our work for stay. The staff brought out costumes for the guests and taught them to salsa. We were exhausted from getting up so early, so we struggled to keep our eyes open for very long. We turned our bedding out onto the floor of the dining area after they turned out the lights. 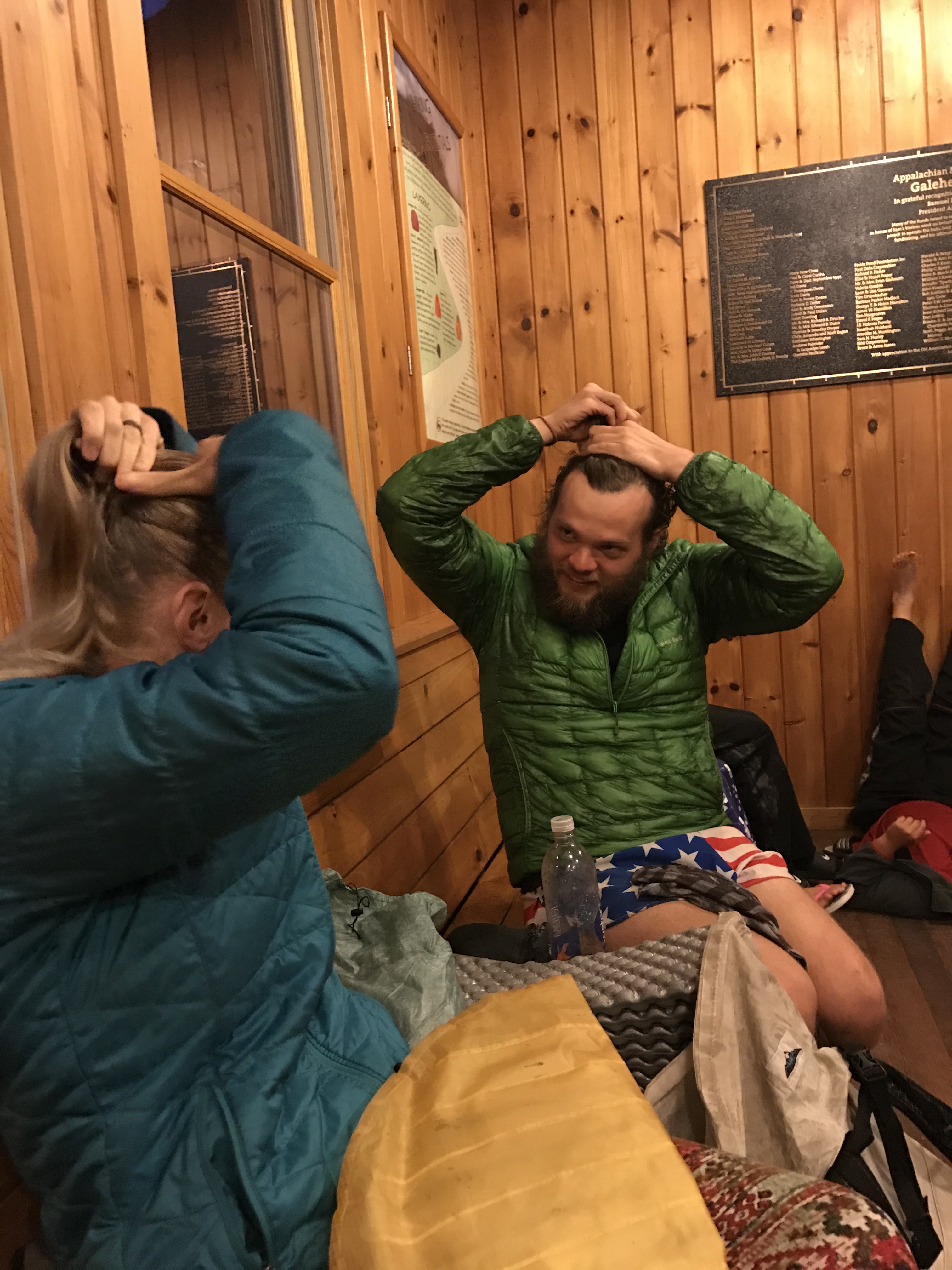 Instructing Rash how to do a bun 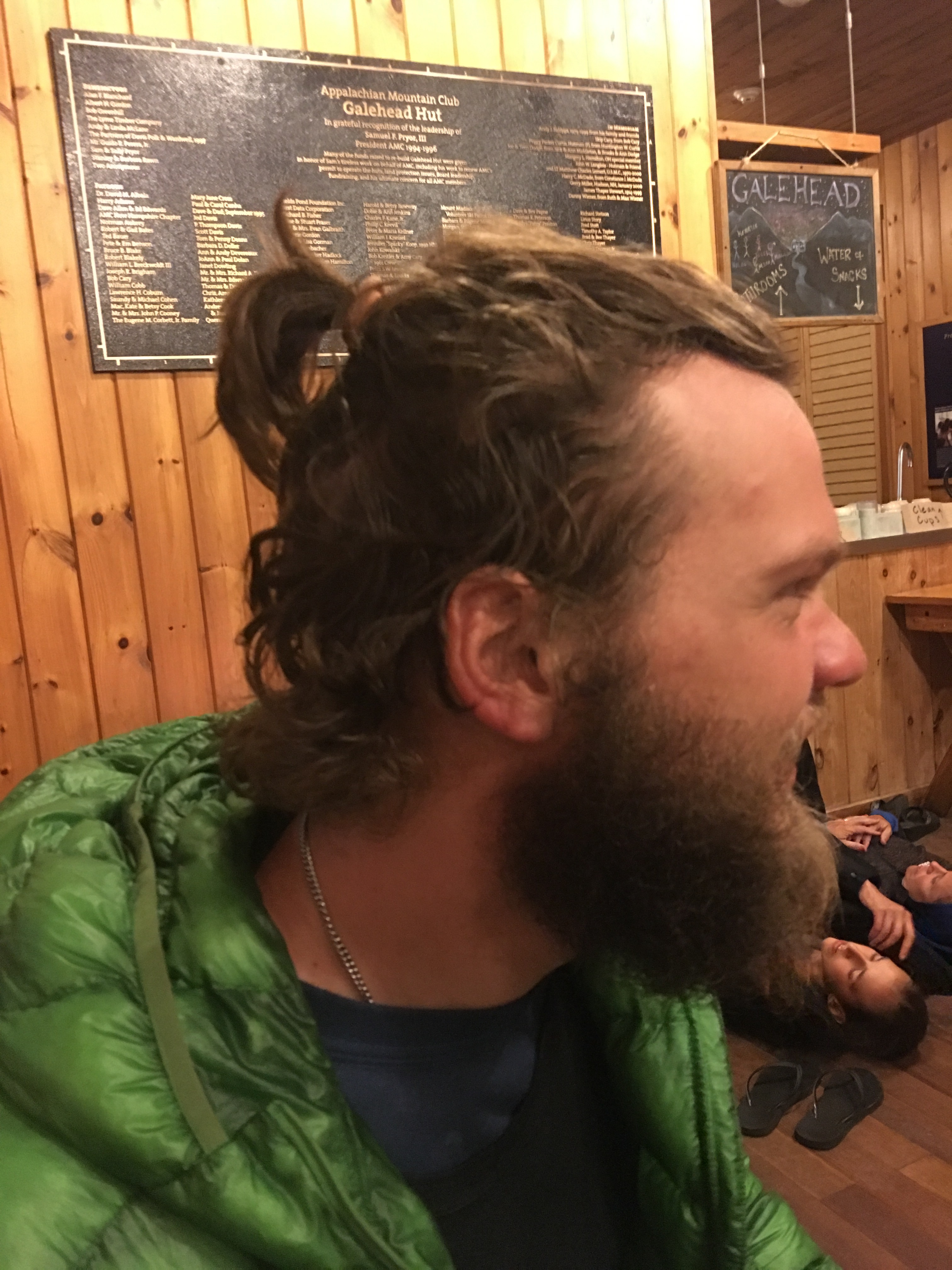 Rash and his man bun

I was woken up before 5am to the door slamming and things moving around. It was still dark but a few hikers were milling around, drinking coffee and getting their things together from the bunkhouse. We got packed up and ate some snacks for breakfast, and got on the trail before 7am. I managed the short but steep climb to South Twin mountain, and after that the terrain wasn’t terrible. I came to Zealand hut where Rash and Piñata were snacking inside. I asked the crew if they had any leftovers, and they graciously heated up some lasagna for the 3 of us. 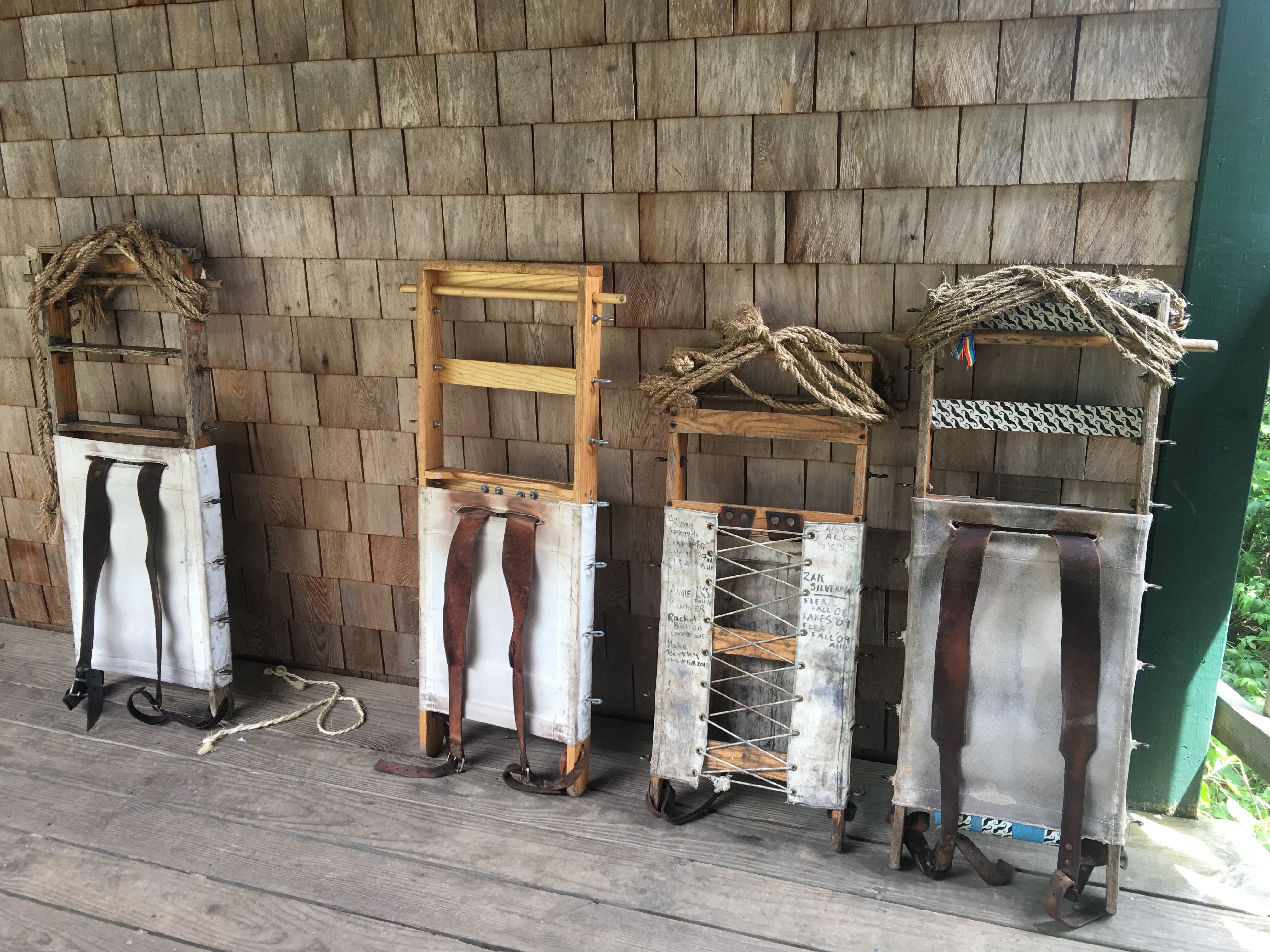 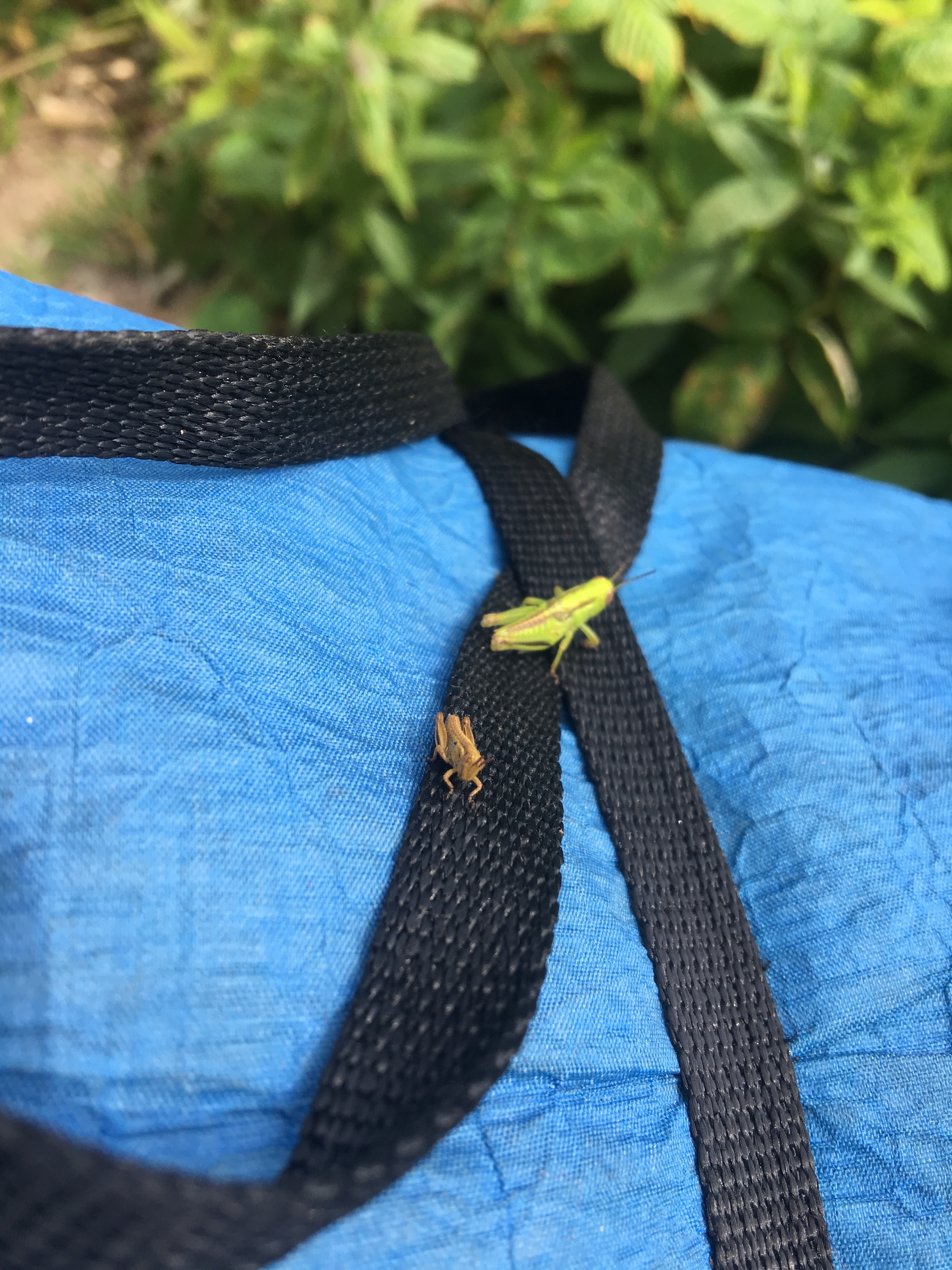 Small friends on my pack

Birk, Flicker, and Medicine Man trickled in. We chatted for a while, then Rash, Piñata, Birk, and I headed down the rest of the descent. We then came to the famous flat area that Tesla had told me about back in Harpers Ferry. For ~5 miles, the terrain was flat with the occasional rock. The view of the mountainside was beautiful and the weather was sunny.

The rocky mountainside along the flat path

We stopped at the sign for the shelter so I could text Gandolf, Flicker’s husband, from my Garmin. We hadn’t had service most of the day, and he was planning on picking us up. The rest of the descent wasn’t terribly steep, and Birk and I got to the bottom quickly. Medicine Man was waiting at the bottom for his ride to the Yellow Deli. Gandolf showed up, loaded our packs on the bed of his truck, and took us the 25 minutes into town. He took us further into town to Walmart so we could resupply, then drove us back to our hotel. This was the furthest we’ve attempted to go off trail for a hotel, so we were very grateful for Gandolf’s trail angeling. It also turned out to be his birthday today!

We got settled in the hotel and I ate my frozen lasagna. We did laundry, but the dryer was broken, so Piñata hung our clothes up in the bathroom and turned on the heat light. We watched our usual Family Feud and relaxed the rest of the evening.