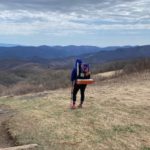 Hi everyone. My name is Amanda but I go by Moss on the Appalachian Trail. I am over four hundred miles into my thru hike and am loving every bit of it, except for the bit that was in the Smokies.  I stand by that.

Anyway, I’m from the coast of North Carolina where I sold my house and quit my job as a Paramedic back in November so that I’d be able to attempt a thru hike. I began working at a coffee shop for minimum wage prior to my departure and soon realized how achievable happiness was. 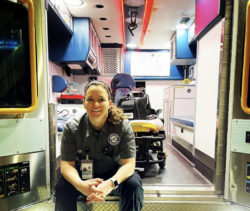 Thru hiking for me is so many things.  Many of these things I don’t believe I have quite discovered yet.  I truly felt as if I needed a break from EMS as I think it was starting to take its toll on me after doing it for nearly a decade.  I needed a break from the monotony of everyday life: work hard, be home only long enough to sleep, get up, go to work, repeat cycle.  I also wanted to do something cool, something I’ve never done.  Something I could look back on in a few years and share with my niece and nephew and have them know that hard things are possible. 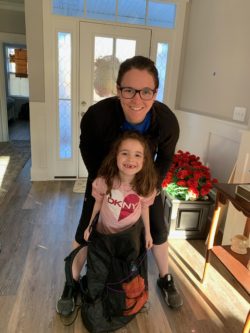 How did I get the trail name Moss? It was given to me on day two of my thru hike.  I was hiking alone, as I normally do, when I thought I was being followed.  A guy behind me twice my size kept stopping every time I would stop for a break—which was frequently.  I would tell him he could pass and he wouldn’t.  So when I encountered another person, which happened to be Mus, I asked her if I could hike with her because I thought I may be being followed. She responded, “Girl ain’t no body gonna mess with us I gotta box cutter between my titties.”

Sure enough, she pulls out a box cutter hanging from a lanyard around her neck.  She and I laughed together and after talking, we realize we’re both from North Carolina and she is only two counties west of where I’m from.

Well, several miles later we meet up with her friend Georgia.  We sit on the side of a switchback, filter some water and eat a snack.  I realize I need to pee. I head off, find a tree off trail to shield me, pull my britches down and do my thing. I don’t realize the bottom of the tree is covered in moss.  When I pulled my pants back up, I began walking funny.  Feeling the sensation of a fresh plant rubbing against my female parts.

I walked back to Mus and Georgia and said with a concerned look on my face, “I’m pretty sure there’s moss in my hoo-ha.”  After they finally stop laughing, Georgia says, “That’s your trail name.”  I said, “Hoo-ha?” And she replies, “No, Moss.”

And there you have it, I am now Moss.  I was reluctant to accept the name at first but it is a funny trail name, a funny story and I like that it came about in a very traditional way.

It turns out that at least six other women reported the guy who I thought was following me, for things such as sexual harassment.  His name was Ice although I’m told he’s used a few trail names since then.  Georgia and Mus hiked with me for days following this incident as have other hikers.

We take care of each other out here.  If not for the kindness of other hikers and trail angels, and strangers even, I wouldn’t still be out here and surely wouldn’t have made it this far.  So far, I’m loving this journey. The cold, the hot, the chafing, the achilles pain, everything. 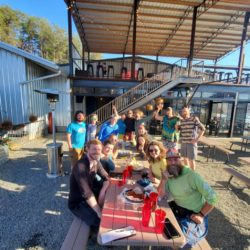