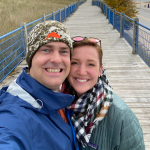 After saying a somewhat reluctant goodbye to my parents, we set forth to leave Virginia once and for all. Jet Pack had new trekking poles waiting for him at the post office in Harper’s Ferry, WV, and so we took off thinking we would easily cruise into town before they closed at 5:00. We tiptoed our way around the rocky trail, dripping with sweat on another hot day, when we found out that the post office actually closed at 4:00. It was 1:50 and we still had 6 miles to town, so I said “good luck”’to Jet Pack and watched as he power walked away down the trail.

As I meandered along at my own more leisurely pace, I reflected on the last month that we had spent in Virginia. We had come over 500 miles in just over a month, picking up our pace significantly from the first quarter of the trail. Our hiker hunger had kicked in and we devoured as much food as we could hold. We made lots of new friends and fun memories. We had settled into our new normal routine and the novelty of life on trail had started to wear off. I was ready to cross another state line and shake off the “Virginia blues.” 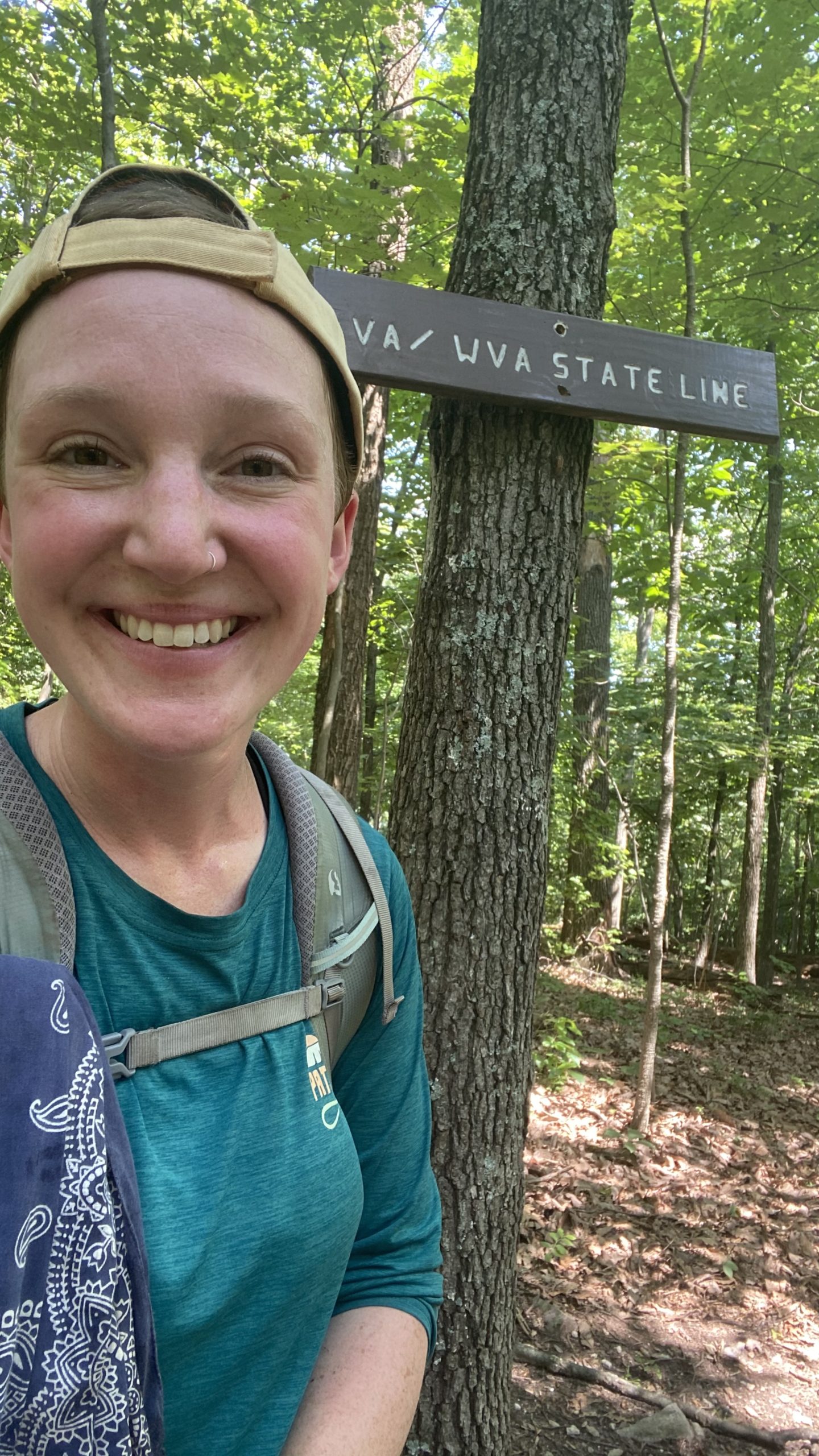 At the border of Virginia and West Virginia, I took my obligatory photo (a little weird without Jet Pack there to celebrate with) and soon caught a view of the Shenandoah River. My friends know how much I love John Denver’s “Country Roads” and I blasted that song on repeat as I skipped down the trail, a new lightness in my soul as I crossed the bridge towards Harper’s Ferry.  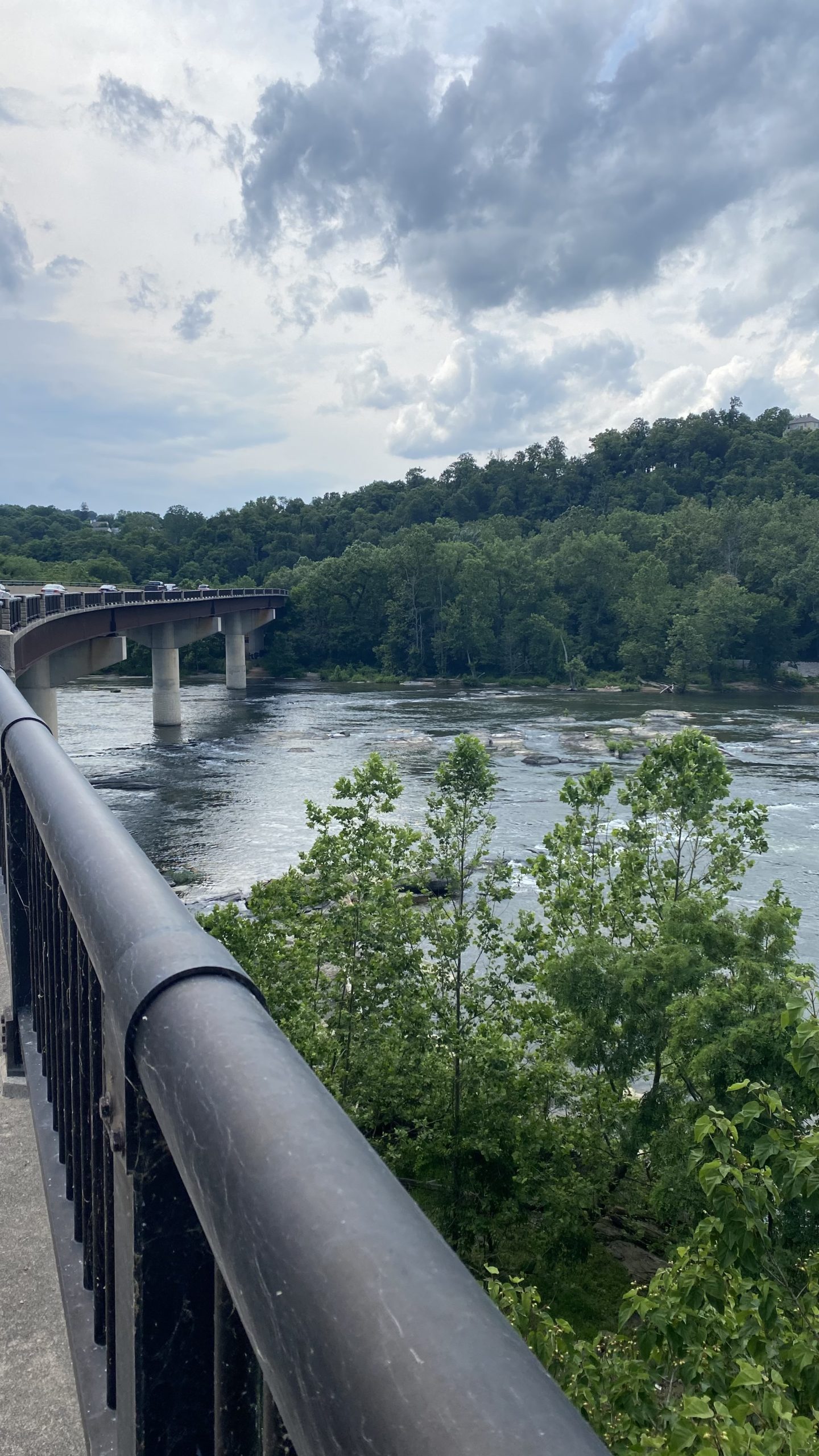 Jet Pack successfully completed his quest to make it to the post office before 4pm to pick up his trekking poles and we met at the Appalachian Trail Conservancy (ATC) Headquarters. The ATC is a non-profit that helps to protect, advocate for, and manage the trail. We chatted with the volunteers who were there and got our photo taken to be added to the scrapbook of hikers for 2021.  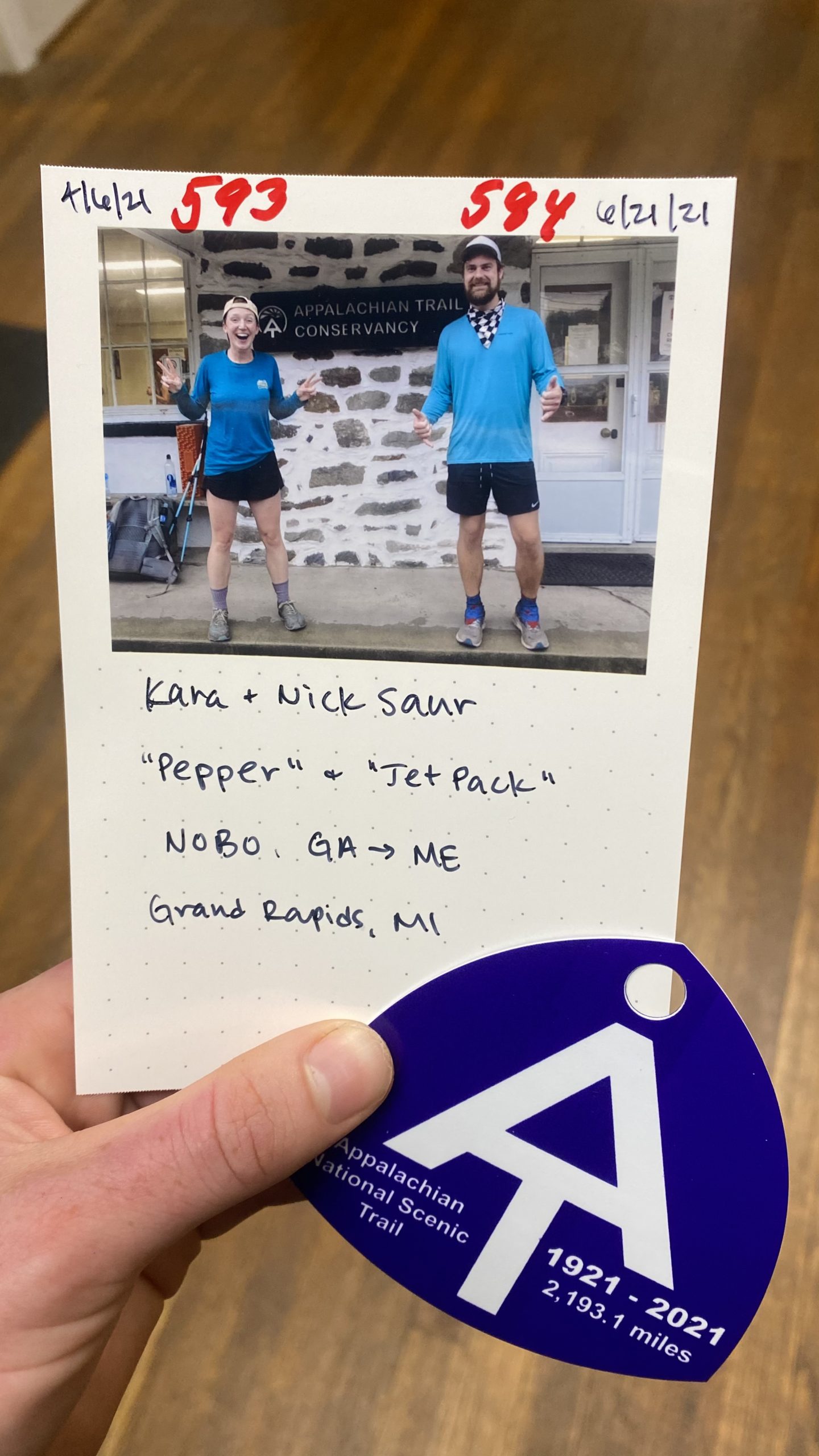 We decided to try to find a place to stay in Harper’s Ferry so that we would have time to explore the historic town instead of pushing another 7 miles down the trail that night. Jet Pack walked into a B&B on the main road to see if they had any open rooms, but had no luck. As we sat down in a pub for dinner, I scrolled through Guthook (an app that includes a trail map and local amenities that may be of interest for hikers) to look for any nearby lodgings. I found one that was close to the pub and gave them a call, keeping my fingers crossed since a storm was brewing and it was getting late. A friendly woman answered the phone, told me she had just had a cancellation, and offered me a discount because it was last minute. “If you had come in an hour ago, I would have told you we were booked!” she said. As you may have guessed, it was the same B&B that Jet Pack had popped into before we went to dinner and neither of us had paid attention to the name.  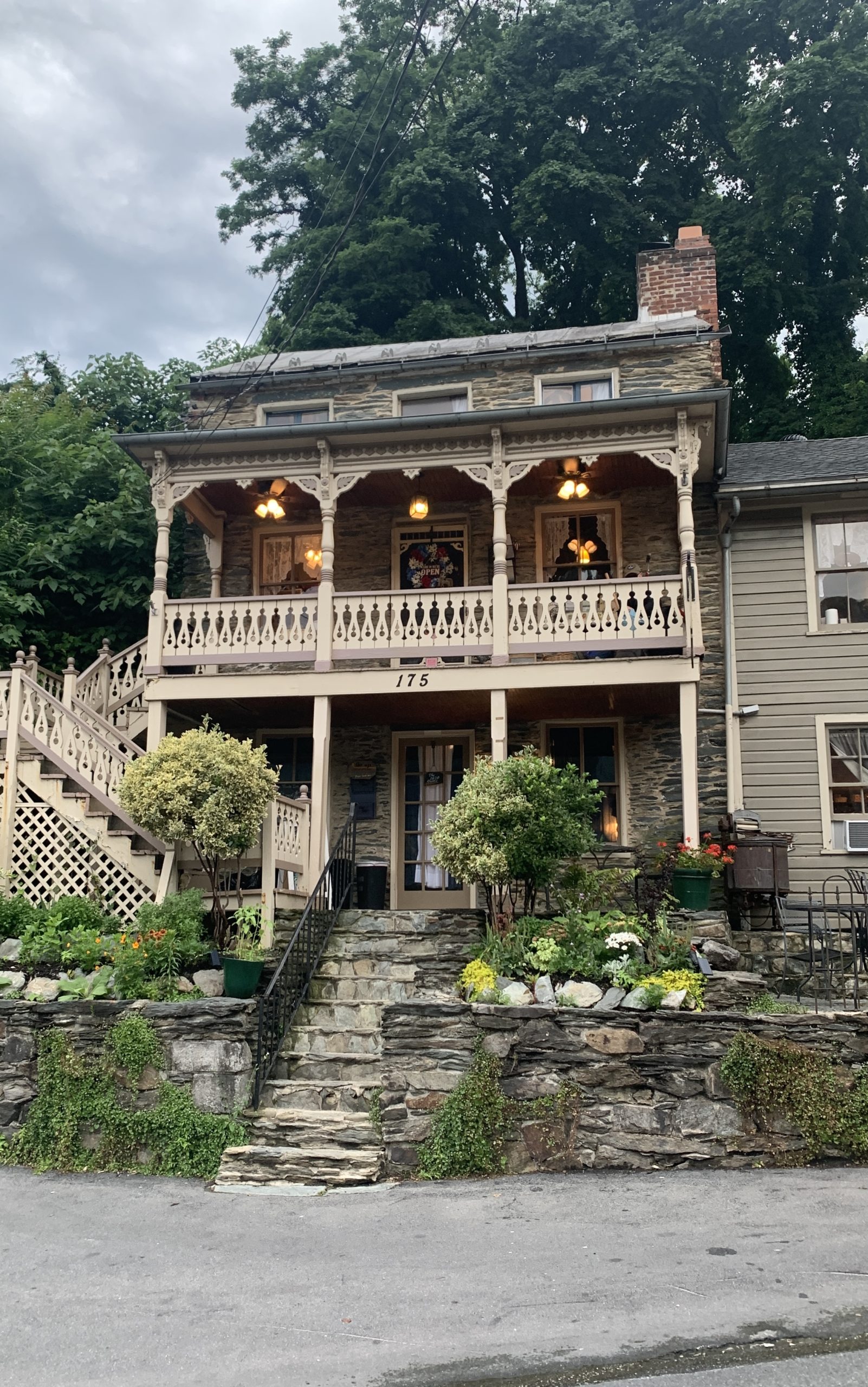 We very much enjoyed our evening in the 200 year Town’s Inn and wandering around Harper’s Ferry. The next morning we slept in, hung out in a coffee shop as it rained outside, and went to lunch with some friends we had found in town.

After Harper’s Ferry, we crossed the Potomac River and officially entered Maryland, our 6th AT state. The trail is only 40 miles long through MD, but we did enjoy visiting the Washington Monument and the Pen Mar County Park before crossing the Mason-Dixon Line and leaving the south behind!  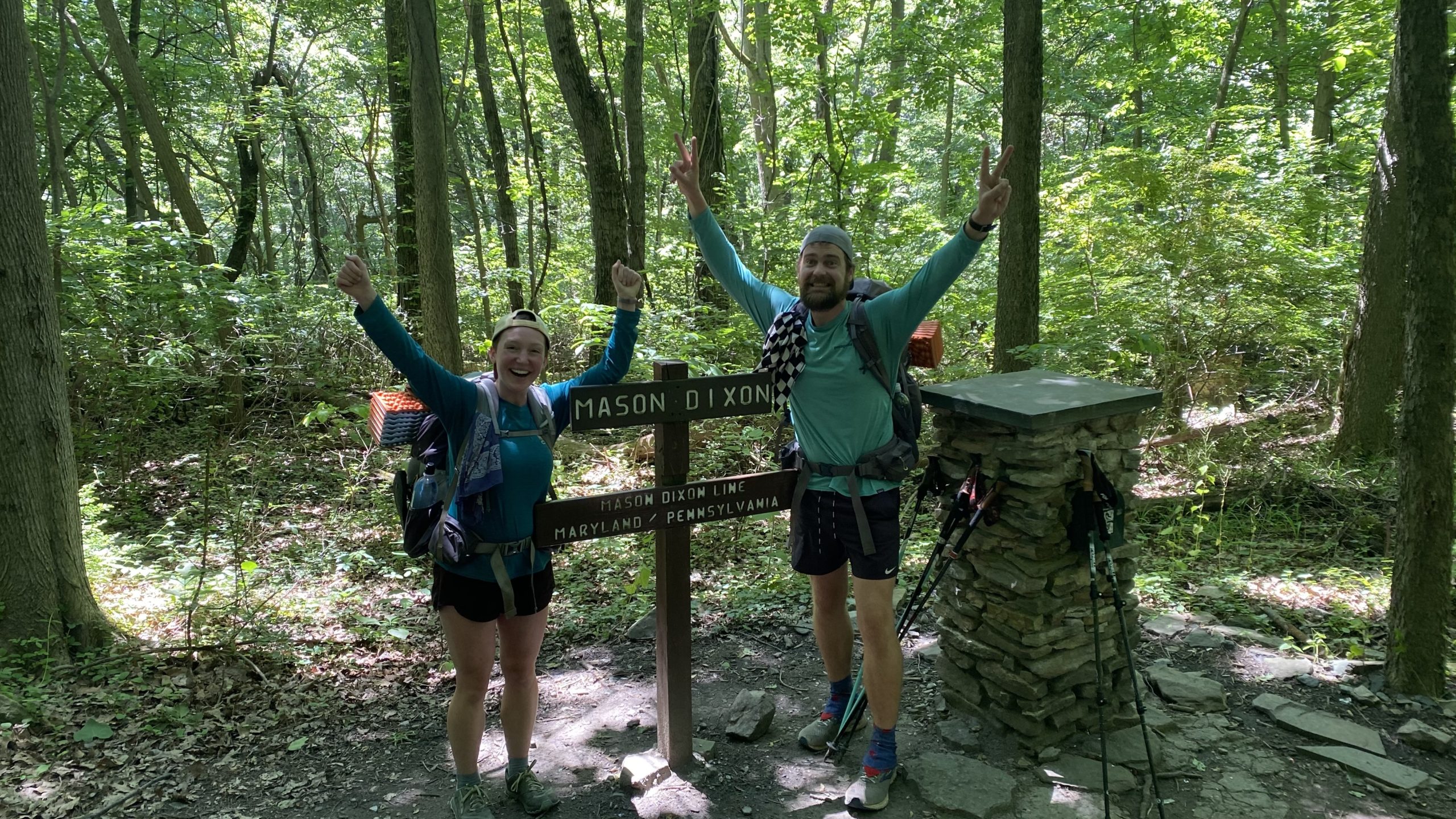 Fun short story: I met another hiker from Canton, MI (my hometown) at a shelter in MD. Not only were we from the same town, but grew up around the corner from each other! Such a small world.

And that sums up what happened on trail in Maryland. Onto Pennsylvania!

 The Half Gallon Challenge

Despite Harper’s Ferry being the “ceremonial” halfway point on the AT, the ACTUAL halfway point is right before Pine Grove Furnace State Park in PA. In the park is a small general store which has a respectable selection of food, but for hikers, there is only one reason to stop: the half gallon challenge. What better way to celebrate being halfway done with the AT than to see if you can stomach a half gallon of ice cream?

Our friends Flo and Machine were at the store waiting for us when Jet Pack and I arrived. We each picked out our flavors- Jet Pack selected cookies and cream and I chose moose tracks. The four of us sat down, started a timer, and dug in. In the beginning, it was wonderful. I am so hungry these days that a 1.5 quart tub of ice cream looked like it would be no problem to devour. After 10 minutes of eating, it became harder to bring my spoon to my mouth. I realized I had never before not wanted to keep eating ice cream, but the day had finally come. I put my spoon down and honorably tapped out. 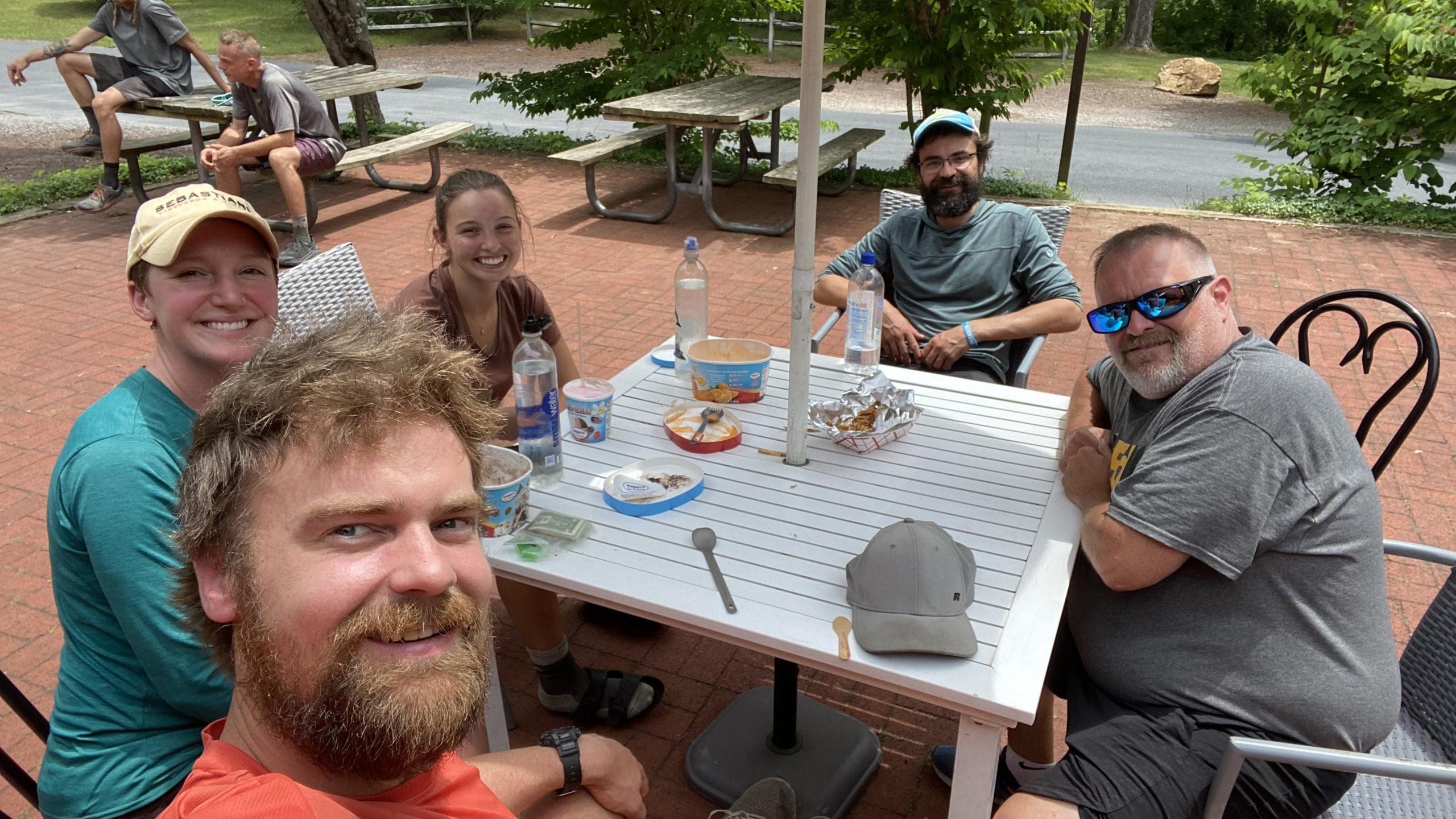 Clockwise: Jet Pack, me (Pepper), Flo, Machine, and trail angel Jim who joined us at the table for a while

Machine, true to his name, had polished off his 1.5 quart tub and went back into the store to buy the pint needed to make a true half gallon of ice cream. Jet Pack was not far behind, eating an entire half gallon in 47 minutes. Meanwhile, Flo and I were groaning and poking the remains of our cartons. After a while, Flo’s orange sherbet had turned to a puddle and she began to slurp it up with a straw. Ever the competitor, I too declared myself back in the game and continued to work on my moose tracks. 2 hours, 59 minutes, and one pint of neopolitan later, I finally accomplished the hardest challenge I had faced yet on trail. 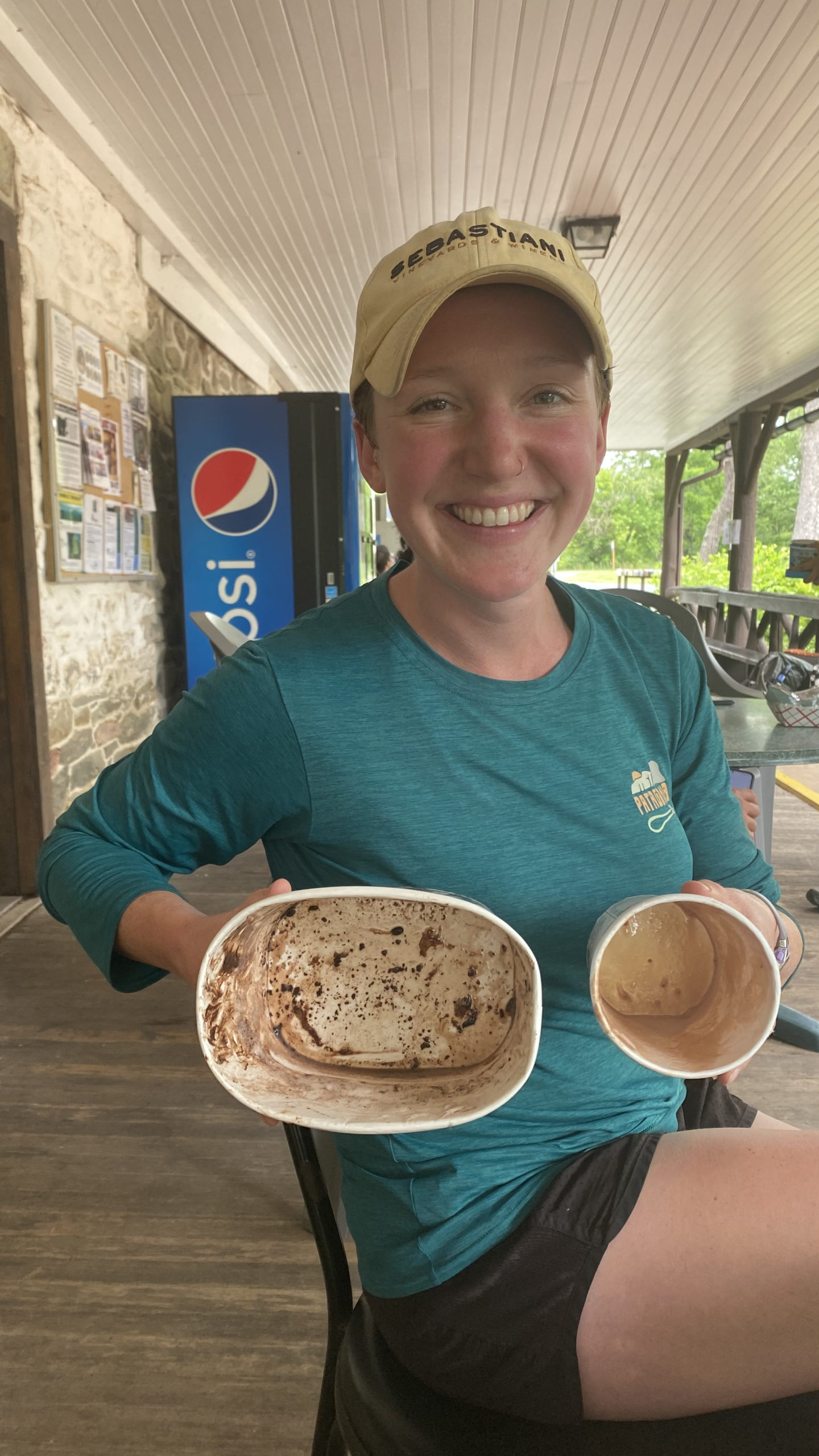 (Epilogue: Flo, never one to quit, completed her final pint after 4+ hours, one of which was spent in fetal position on the ground).

My Favorite Week on Trail So Far

The half gallon challenge kicked off my favorite week on trail that we’ve had to date. With our friends Flo, Machine, and Semi, we platinum blazed our way through southern PA. (Following the AT is “white blazing,” because you follow the white rectangles painted on trees. Platinum blazing is swiping the platinum credit card to live the high life along the trail, like staying in hotels instead of camping and eating in restaurants instead of cooking ramen.) 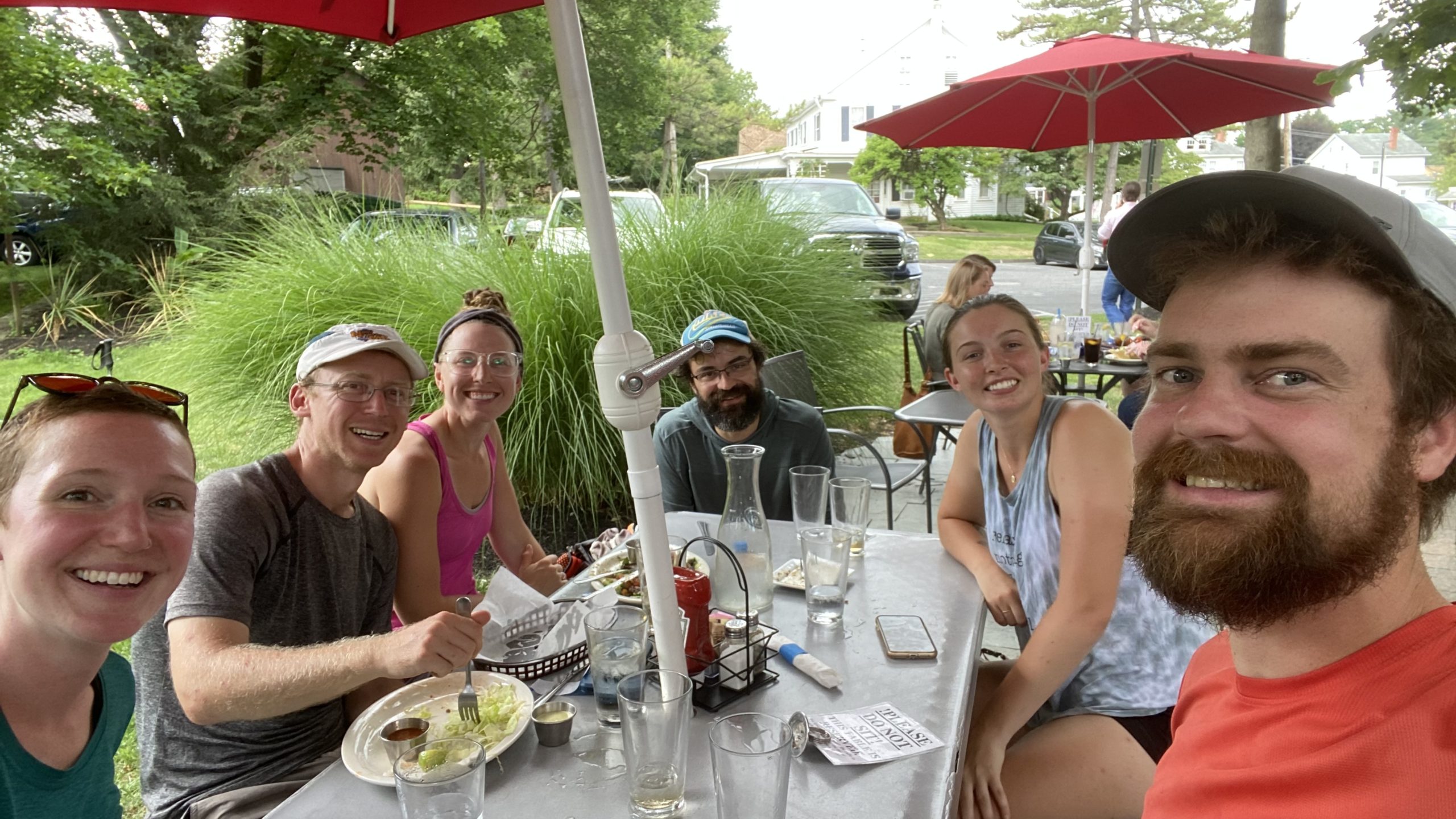 For three days in a row, we ate lunch in a town, which is serious luxury for hiker trash like us. We did our first marathon day and stopped for lunch in Boiling Springs. The next day we strolled into Duncannon and stopped at a pub, where a local man sneakily paid for our burgers and beer. As we sat with our friends, I casually mentioned that I wouldn’t mind splitting a hotel room 5-ways if they were interested. The vote was unanimous and we found ourselves on our way not back to the trail, but to the Red Carpet Inn. It was about as glamorous as it sounds.

The next day we dragged ourselves out of our slightly air conditioned motel room into the heat advisory. It was 96 degrees, felt like 106- perfect day for hiking! Because of our late start at 2pm, the five of us agreed to do some night hiking in order to still get some miles in. As we set up camp at 10pm in the pitch darkness, we suggested getting up at 4am in order to beat some of the heat for the next day. On the morning of Semi’s 19th birthday, we set out by 5am, headlamps on, and had cranked out 12 miles by 10:30am when we all took a midday nap in a shelter. We then spent the afternoon soaking our legs in a cold stream, trying to beat back the heat rash that had taken over half of my body. 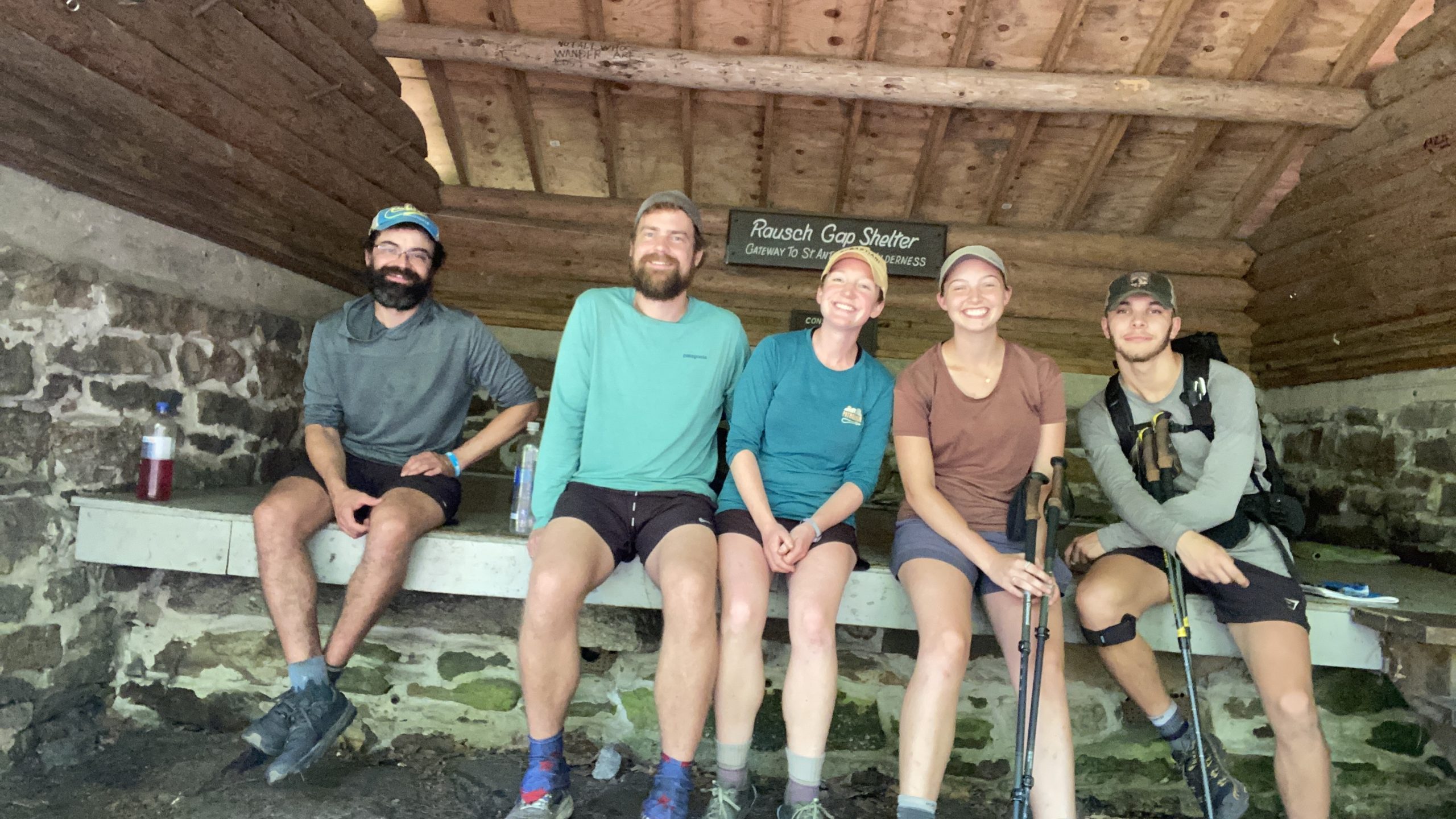 Well rested after our midday nap

That evening, Machine informed us all that we were only two miles from a Wendy’s and that we couldn’t let Semi’s birthday end without getting him a frosty. Somehow the five of us piled into the backseat of a kind couple’s Ford Edge and landed at Wendy’s in Lickdale, PA. As we savored our burgers and frosties, Machine casually mentioned that a massive thunderstorm was rolling in and that there was a hotel nearby. Shrugging guiltily, we all agreed to share another hotel room and enjoy another shower. 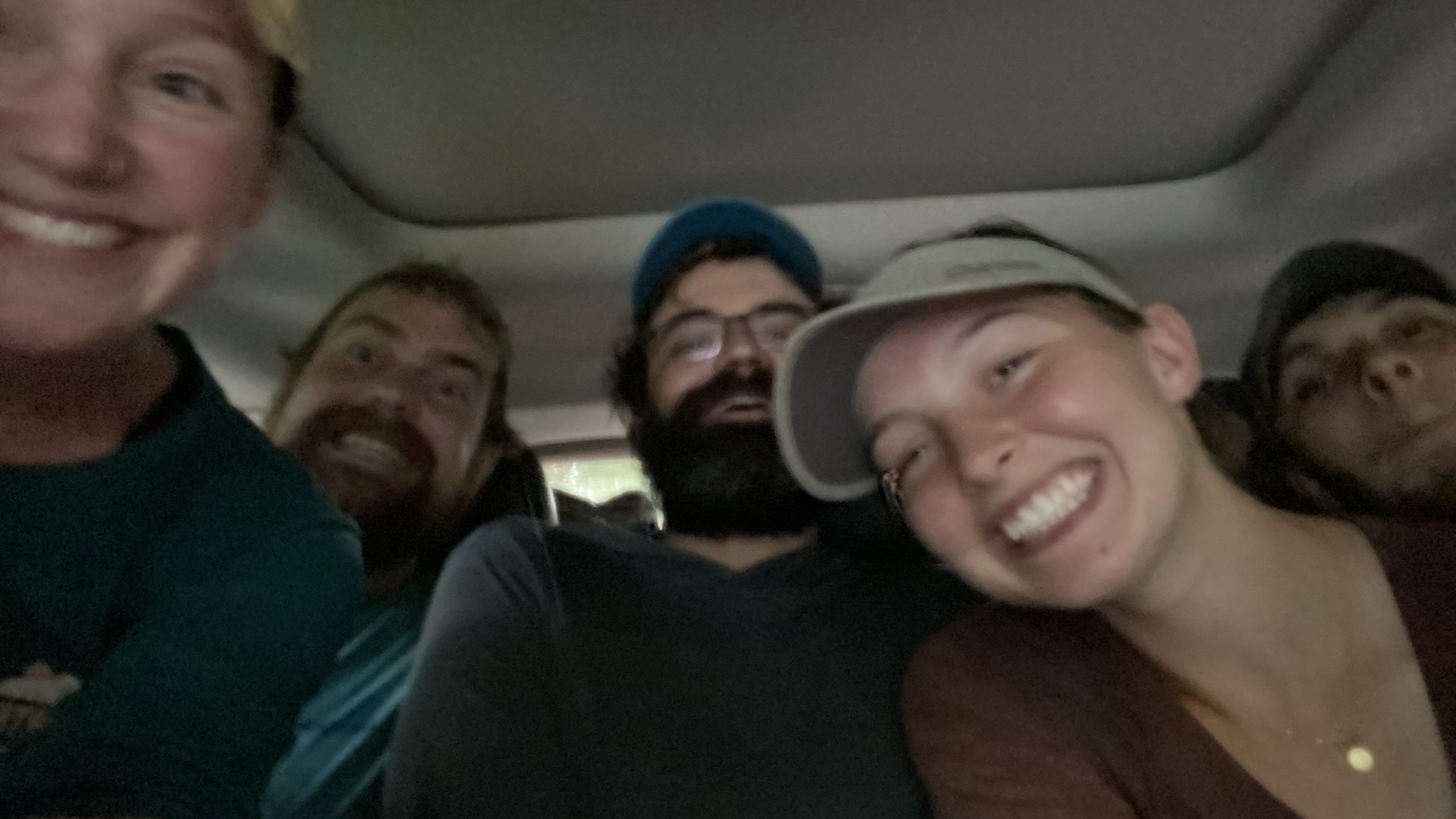 5 hikers piled in the back seat

The platinum blaze streak was lavish and glorious, mostly because it was spent with good friends and lots of laughs. I was beginning to wonder why PA had such a bad rap amongst thru-hikers because I was having way too much fun.

And then came the rocks….

Expectation: We would spend the entire trail with one group of friends as our trail family (or tramily, as a thru-hiker would say)

Reality: We have met and hiked with so many wonderful people and spent different sections with different groups. Each group has brought awesome memories and lifelong friendships.