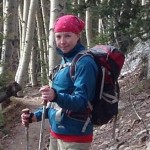 Yellow is Our New Color and We Have a Trail Name: Davenport Gap to McAfee Knob

Adam and I have been yellow and white blazing for nearly a month. We are still processing that we are no longer thru-hikers. Physically, this was an easy adjustment. Emotionally, it has been more difficult. We want to be on the trail all of the time, but we know that the decision we made to do sections only is the right one for us. 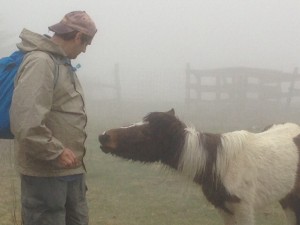 Did you bring something for me?

When we decided not to thru hike we made a list of the places on the AT that we want to see–no matter how we get there. We crossed five off of our list during the past three weeks: Hot Springs, Max Patch, Damascus, McAfee Knob and the Grayson Highlands (and ponies).

We camped in Hot Springs for two nights, took a dip in the mineral baths and hiked to Lover’s Leap. We then drove to Max Patch on a beautiful Easter Sunday. There were people everywhere flying kites, having picnics, walking dogs, leaving plastic eggs with candy tucked inside for the thru hikers, etc. The view was spectacular and to make the day even better we saw Coco and Magnus at the top of the bald. This may be the last time we’ll see them on their journey. We certainly hope not, but we’re now moving north at a much faster rate. We had just missed seeing Luna and MadHatter. 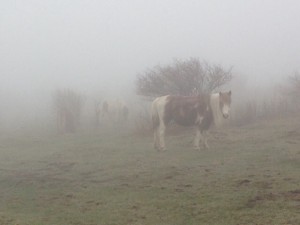 This pony and its friends followed us to the path to the parking lot.

The four of them came through Davenport Gap on a day in early April when we hosted some trail magic. We were thrilled to see them. Since the quartet was headed just to the Standing Bear hostel, they lingered with us for a bit. We were so excited (and so were they!) that their Smokies journey was complete. However, I was not prepared for how I felt when it was time to say goodbye. It was so hard to watch them head back into the woods. In that moment all that we wanted was to go with them.

The next stop for us was the 25 mile section roughly between Roan Mountain and Hampton, TN. We stayed at the Black Bear Resort (which was wonderful) and took a shuttle south to Roan Mountain. We were prepared to stay out for two nights, but the miles passed easily. We knew it would rain that night so we pushed it a bit on the first day and made the 12 or 13 miles to the Vango/Abby Memorial Hostel. What a stroke of luck. The rain started when we found the steep side trail to the hostel. And what began as a pitter-patter of drops turned into a five-minute-long hailstorm. That evening, we and repeat thru and section hikers Bismarck and Hopper were happy to have a roof over our heads. (It’s a small world. We were the only people at a hostel in eastern Tennessee and Hopper went to the same high school at the same time as two of Adam’s sisters.) 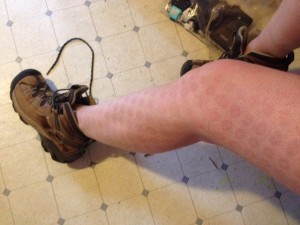 What happens when you nap directly on your Thermarest.

We left the hostel early the next morning. More rain was in the forecast and we wanted a couple of miles under our belts before it started. We rested at Moreland Gap Shelter and hiked the rest of the way to the Black Bear Resort. This was our first long section since heading south from the Wayah Bald Shelter. We were pleased with our section hike, and most especially so because we had stuck to our commitment to get back on the trail.

Next up for us was heading toward the Damascus area. We went to the Grayson Highlands first and hiked from Massie Gap to Mt. Rogers on a cloudy, gray day. We loved it. We were nearly the only people on the trail and the fog, then mist and then rain was what we had imagined our highlands hike would be. We also loved the lush forest at the summit of Mt. Rogers, the highest point in Virginia. (There are two survey markers at Mt. Rogers. Both are on boulders and are about 15 yards apart.) We saw several wild ponies on the hike south, but they were far away from the trail.

While hiking north from the Thomas Knob Shelter the ponies started getting closer, but the fog was so thick that for a couple of miles we could only hear them whinny to each other. We started to see them once we got closer to Massie Gap. It was as if they materialized out of the fog. One group followed us from the high meadows to the path to the parking lot. I know they were looking for treats. I also know we weren’t supposed to feed them, but we did pack in a bag of carrots and were happy to oblige. 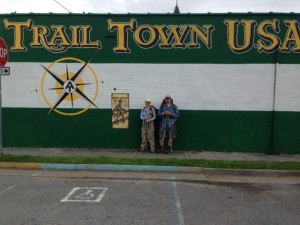 The end of our hike into Damascus, VA.

The entire hike was wonderful, although tiring. I struggled hiking north on the rocky paths. The rain didn’t help. The rocks became more and more slippery as the afternoon went on. I stumbled and tripped for nearly half of the nine miles we completed. But I was determined not to fall and managed to stay on my feet.

Two days later we hiked the 15 miles from Low Gap/421 into Damascus, VA. How many Low, Deep and Sassafras Gaps are there on the AT?) It was a cool, windy day, but the rain held off. Bill Harris, the Keeper of the (Virginia) Creeper Trial and his dog, Deohghi (D-O-G) shuttled us to our drop off. Once we got out of the van we heard, “Hey, it’s March Madness!” On Facebook, we’re Backpacks and Bourbon, but to thru hikers Moxie and Maps, we’re March Madness. We didn’t know we had a trail name. But, while in Georgia, we hiked with the pair for a day and we must have talked a lot about college basketball during that day. It was mid-March and we’re from Louisville. (Our team didn’t get as far in the tournament as Zach’s.) 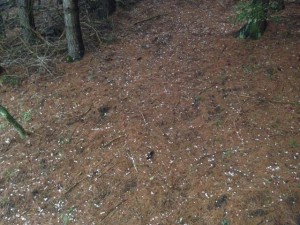 This picture doesn’t do justice to the marble-sized hail that fell.

The trail is porous and it’s ever changing in terms of who is on it and when. Like us, Moxie and Maps wonder how folks that they’ve met are doing. They gave us a name so that they had an easy way to ask each other how we might be doing and where we might be. To us, Moxie and Maps were a few of those people. We called them the Maryland Ladies since one of them is from this state. We were glad to see them and to see them in such high spirits.

We hiked to McAfee Knob this past Saturday. It was a beautiful day and the four-mile trail was not difficult. But someone opened the people dam. The trail was very busy and we saw only a few thru-hikers. We didn’t stay at the top for very long due to a horde of bloodthirsty gnats. And, even though AT tradition dictates the practice, I did not hang my legs over the rock ledge. It is not nearly as precarious a stunt as it appears in photographs, but it’s still not for me.

We’re spending this coming week in West Virginia. Our journey is also becoming a peak bagging trek of sorts so we’ll hit this state’s highest point and then head back to the AT as it winds its way through Shenandoah National Park. Hike on.