Day 52, 4/18: Wapiti shelter -> Pearsiburg, VA (17.8 miles)
I woke up around 6 and contemplated running out to Bri’s tent and scratching on the side to scare her, but I decided against it. Beetle and Friendly Ghost were up early, and I didn’t wait too much time behind them to get moving and packed up. I ate oatmeal while in my sleeping bag, and Bri had a few cups of Friendly Ghost’s coffee. I hit the trail going very slowly up the first hill. Everyone passed me as I stopped to text my sister in law to tell her what time I’d be at the trailhead. I wasn’t feeling it this morning and was hiking really slowly up the steep climb.

Once I got up the mountain, I checked my mileage against the time I gave Angie and realized I was way behind. I had to do at least 3.5 mph to get down in time. I strapped my pack down tightly and jogged down the mountain. Rash, Pinata, and I call this channeling our inner Beeline (after the hiker who runs uphill). I passed Rash and Pinata on an overlook, and Bri and Friendly Ghost on a downhill. The last part was full of rocks so that took longer, but I came to the road with 4 minutes to spare. I also saw Beetle and Friendly Ghost in the distance crossing the dirt road to the trail.

I got to the road and took my pack off, and Sitting Bull wasn’t far behind me. We waited for 30 seconds before Angie’s car pulled up, so the timing was perfect! She had Snickers and fruit that she offered us, so we took a few minutes and ate and played with her dog, Bandit. Bri, Rash, and Piñata showed up. We asked if Bri wanted a Snickers, which she gladly accepted, so Angie unlocked her car to get one and accidentally locked her keys in her car. We decided to deal with that later and started the hike with Rash and Piñata.

We stopped at Doc’s Knob shelter briefly so I could show Angie what a shelter looked like. Beetle and Friendly Ghost were having lunch, and as we were leaving, Towelie came down. I hadn’t met him, but I heard that his mom knew Captain’s mom. Small world.

The weather was beautiful and we had great views. We stopped on the side of the trail for a snack of bananas, carrots, and fruit. Since Rash, Piñata, and I were already 7+ miles in for the day, we were a bit tired. We pushed onto Angel’s Rest and got a terrific view, and had a second snack/bathroom break. We passed Towelie and 2 other hikers camping. 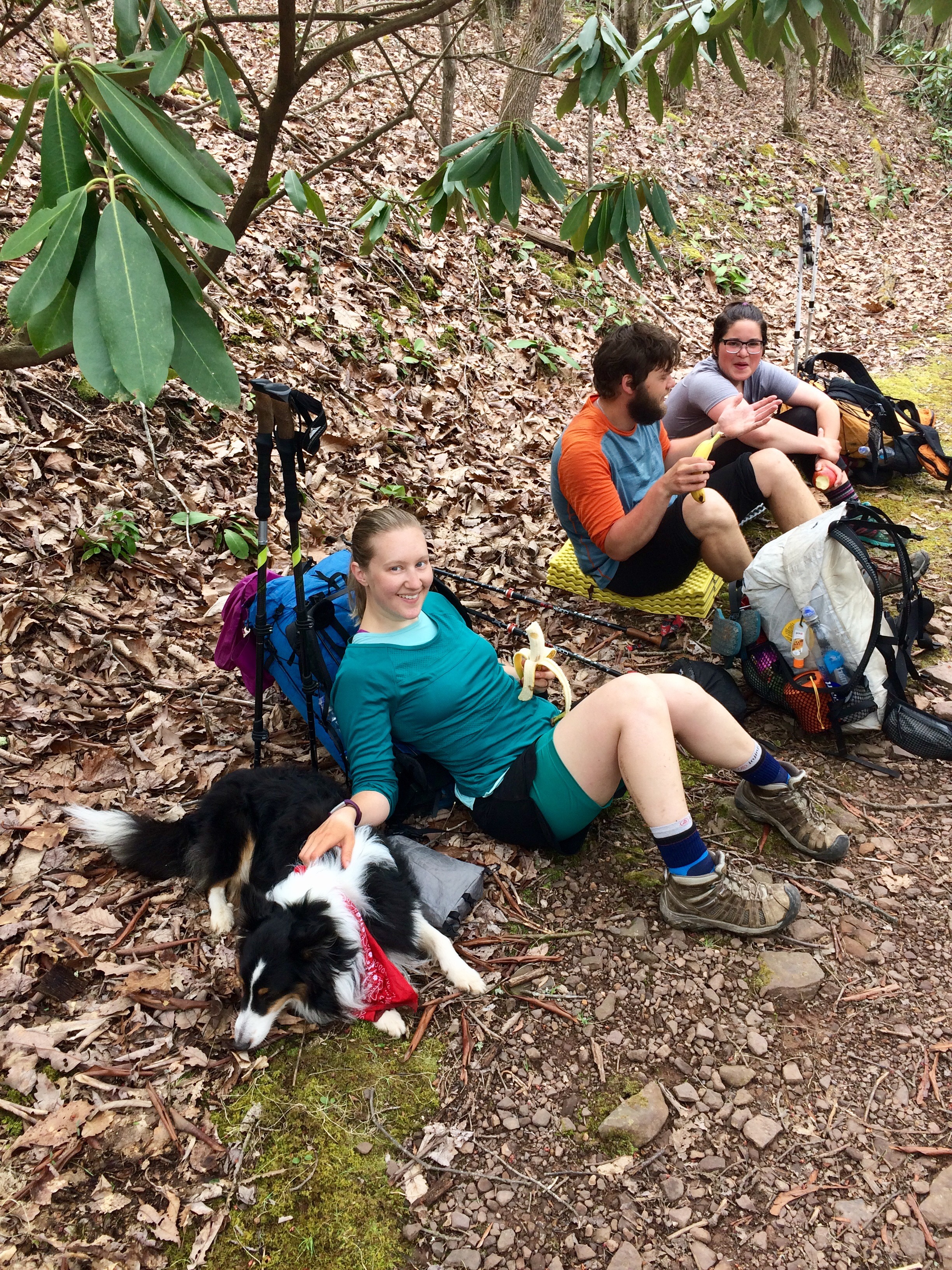 Snack break on the side of the trail 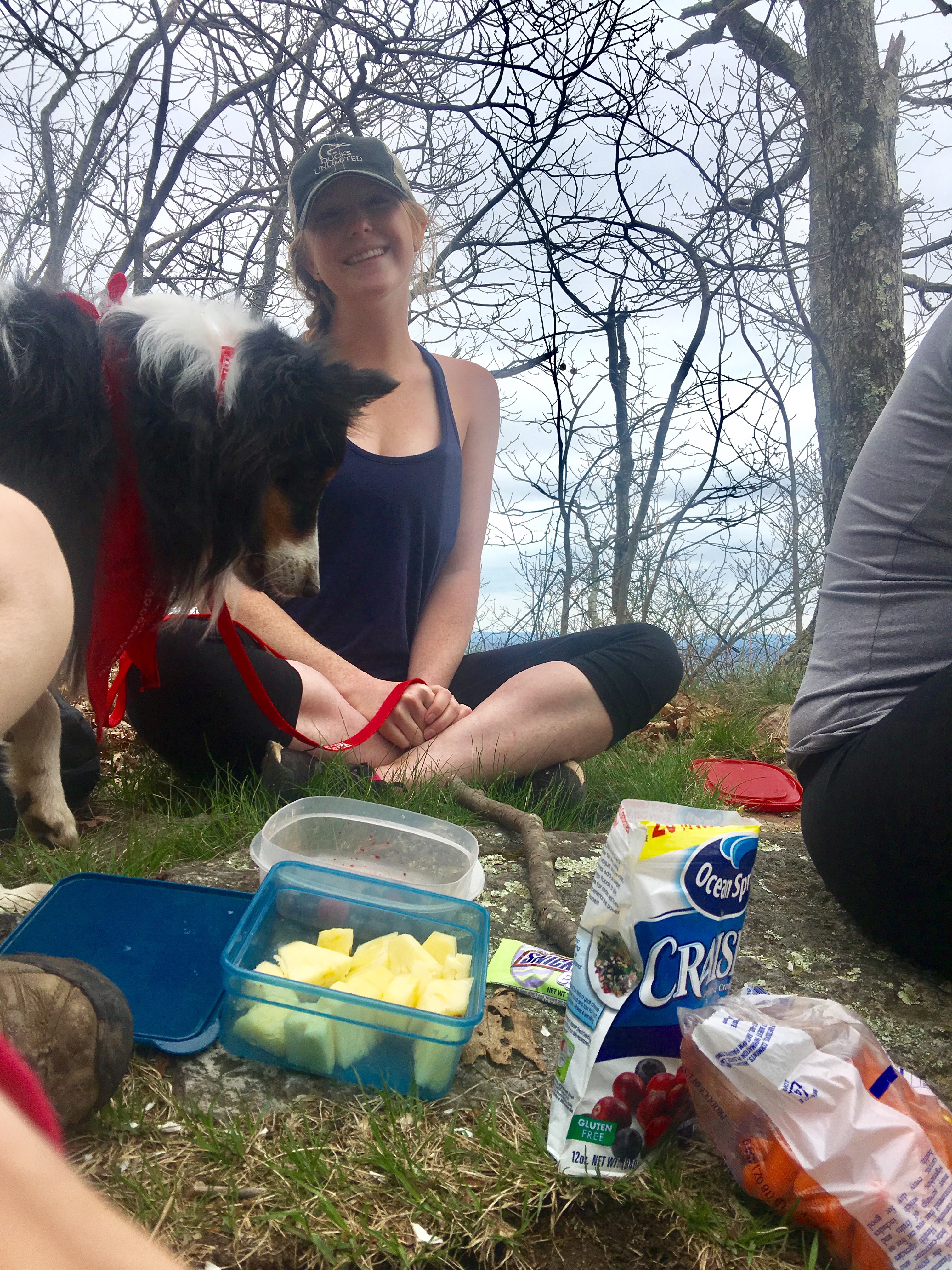 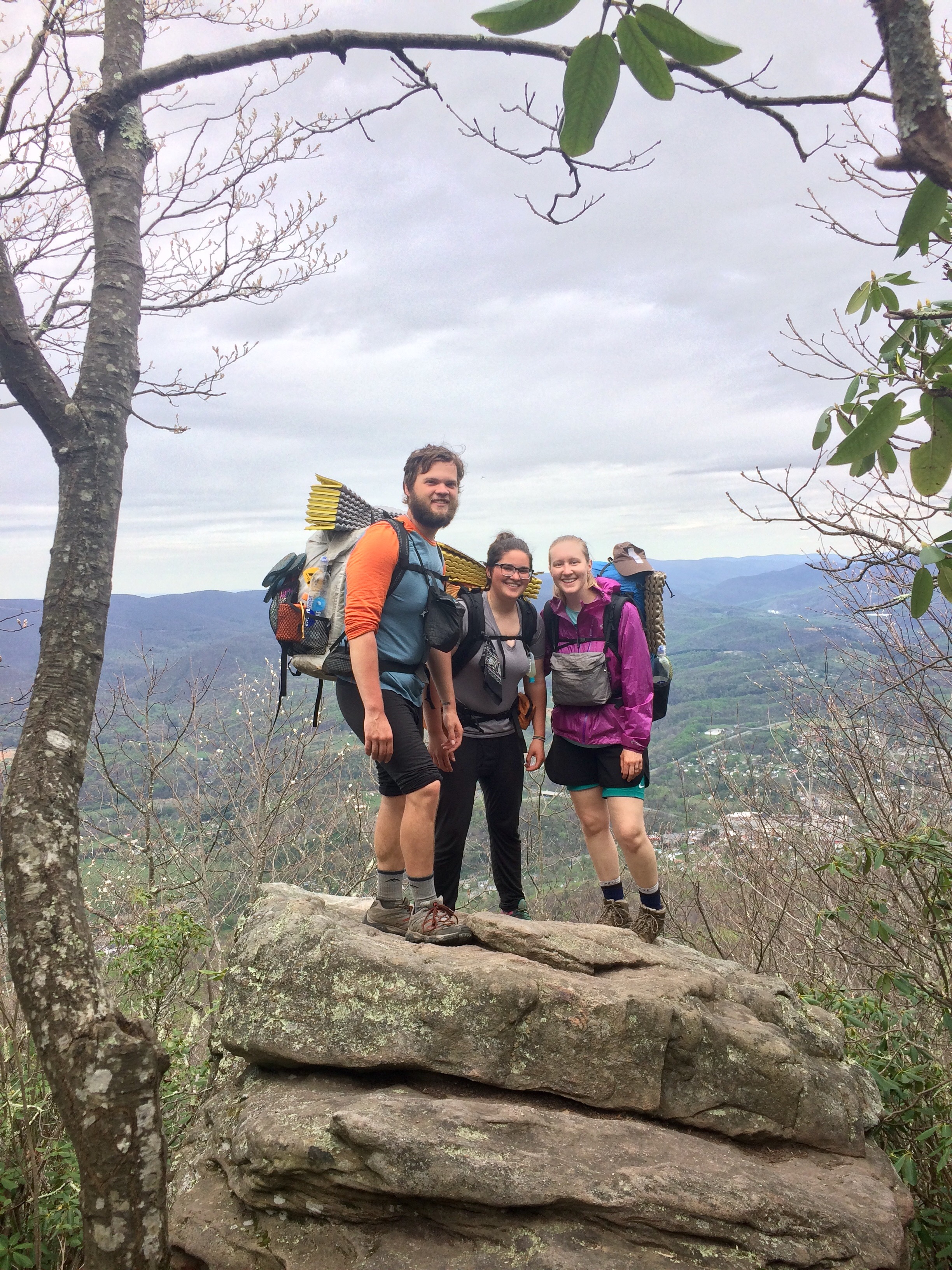 Rash, Piñata, and me on Angel’s Rest

We started the long descent to Pearisburg and the fields of flowers were in full bloom, perfuming the mountain. We crossed through a meadow and came to the road. We decided to hitch the ~1 mile into town. Thumbs out and it didn’t take long for a pickup to stop for us. We loaded up in the back and were thrilled for our (mine and Angie’s) first hitch. 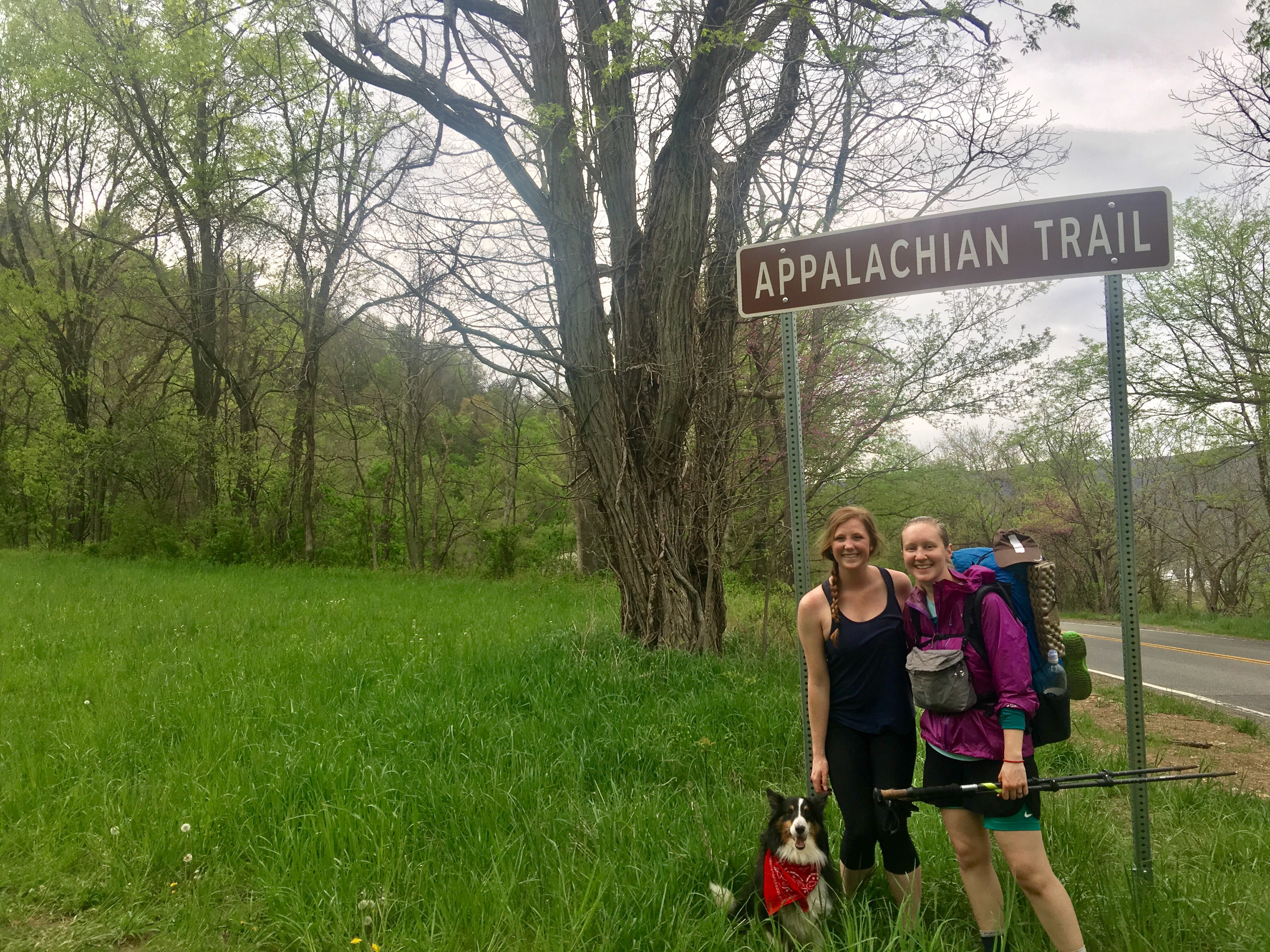 After descending the mountain 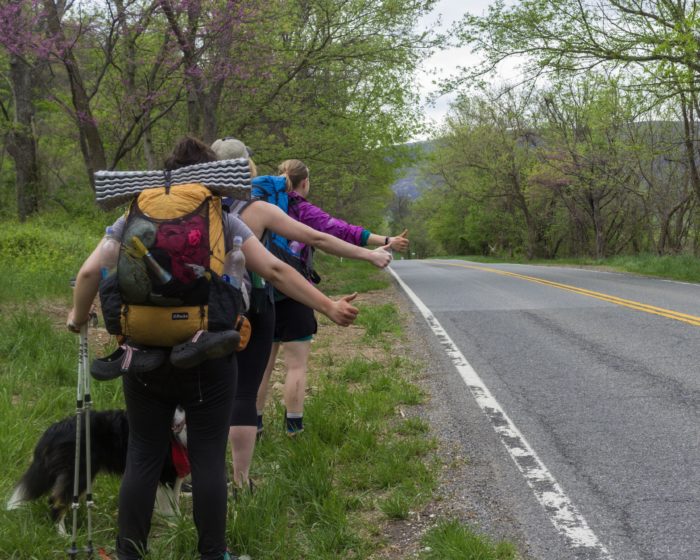 We walked to the hostel with Rash and Piñata and made our way to the Mexican restaurant. We didn’t have to wait long for Louis and Chris to show up, with Lexi and Einstein in the car! I hadn’t seen the dogs in over 2 months and I didn’t realize how much I missed them. We left them in the car and went inside to eat where we saw Beetle and Friendly Ghost. I ordered a chocolate milk and 2 dinners. 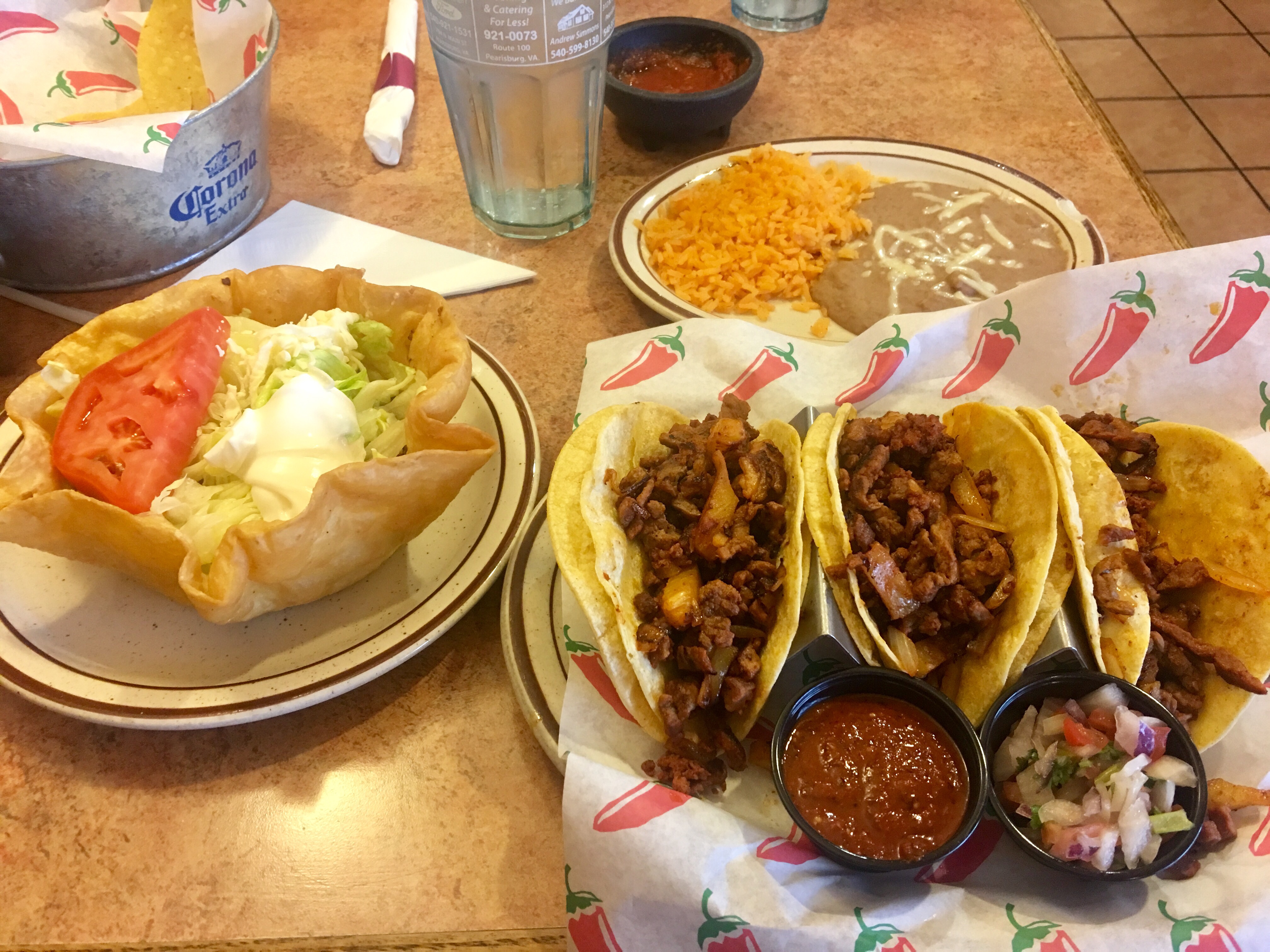 We went back to Angie’s car where Louis succeeded in breaking in, then we drove the long drive back to Blacksburg. I organized my gear and gave them the rest of my winter gear to bring home. Angie graciously let me and Louis have her bed while she slept on the pullout with her mom. Louis seemed stressed all evening and immediately fell asleep. I wasn’t far behind him. 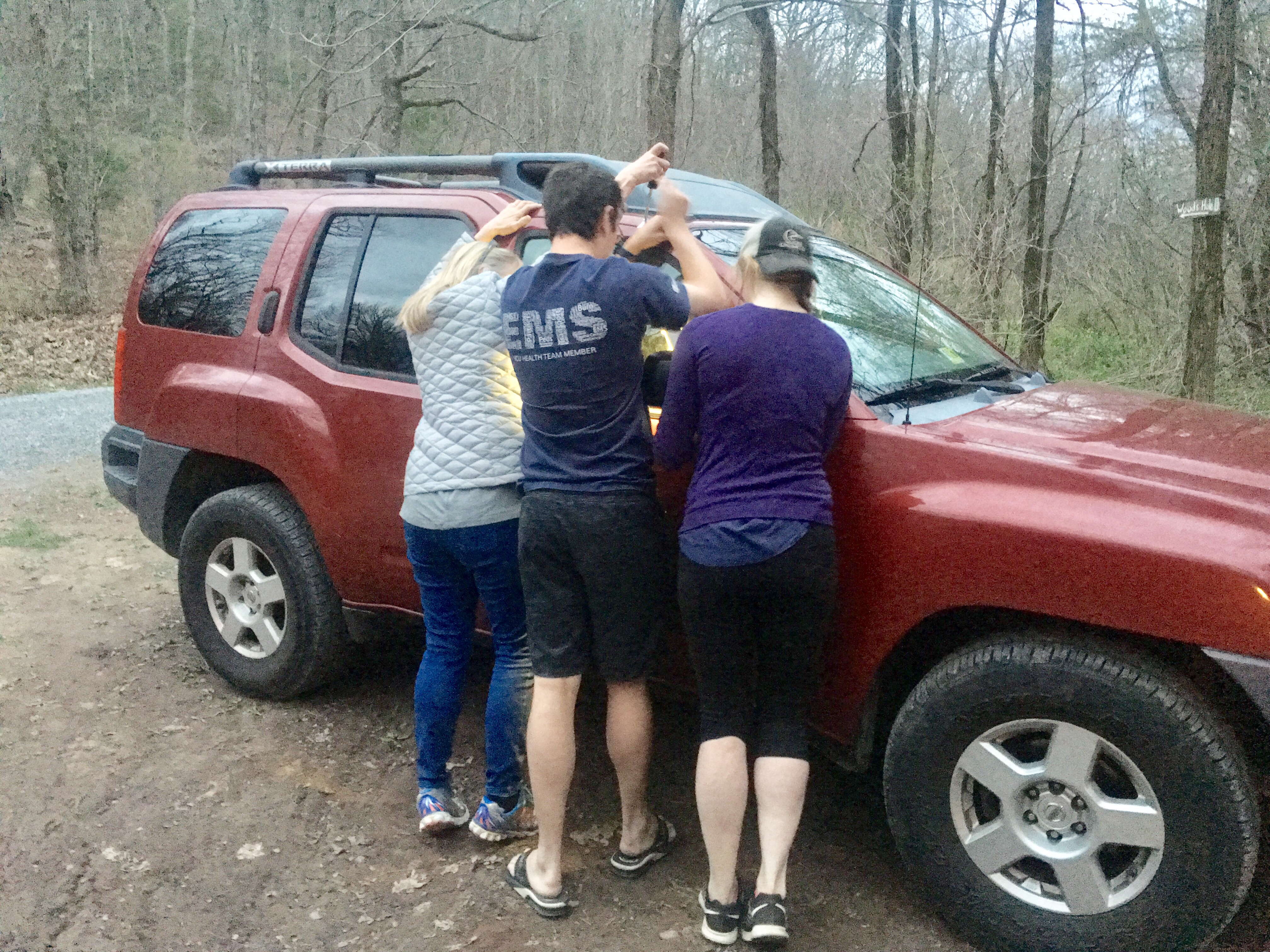 Louis and Chris left early for home. I woke up to say goodbye and went back to sleep. I got up as Angie was leaving for class and she told me to take her car to get groceries if I needed. I sat on the couch most of the morning, petting Bandit, and it felt glorious to not be on my feet.

I did a grocery run with the intention of going to Walmart which was ~15 minutes away, but passed Kroger and decided to pull in there instead of driving the 30+ minutes round trip to Walmart. Walking is always painful after sitting for a while (or even a short time) so I did the hiker hobble over to get a cart, then used the cart like a crutch.

After being away from civilization even for a few days, I love going to the store and marveling at everything on the shelves. I took my time and wandered the aisles. I had on my new trail runners I was planning on switching to, but I replaced the insoles with my Super Feet insoles I was using in my boots. They were not working with the trail runners at all, and by the end of the grocery store trip, my feet were on fire. I’m glad I found this out before going on the trail.

For lunch I bought sushi (made fresh in Kroger), whole chocolate milk from a local dairy, and my normal small container of vanilla yogurt. I bought a small salad to pack out for lunch tomorrow. Passing the wine I found a bottle with a dog on the front and thought that’d be perfect for Angie and her vet friends.

I drove back to her apartment, got everything upstairs, and got back to doing nothing on the couch. Angie and her roommates came home, and Angie went to a cooking class hosted by Virginia Tech and her roommates made a Blue Apron meal. Her roommates have a tiny puppy that just had brain surgery after being bitten by another dog, and they were getting his medications sorted out. Being around 2 dogs, a cat, and a snake in the other room was glorious. I miss like crazy having animal companionship on the trail. 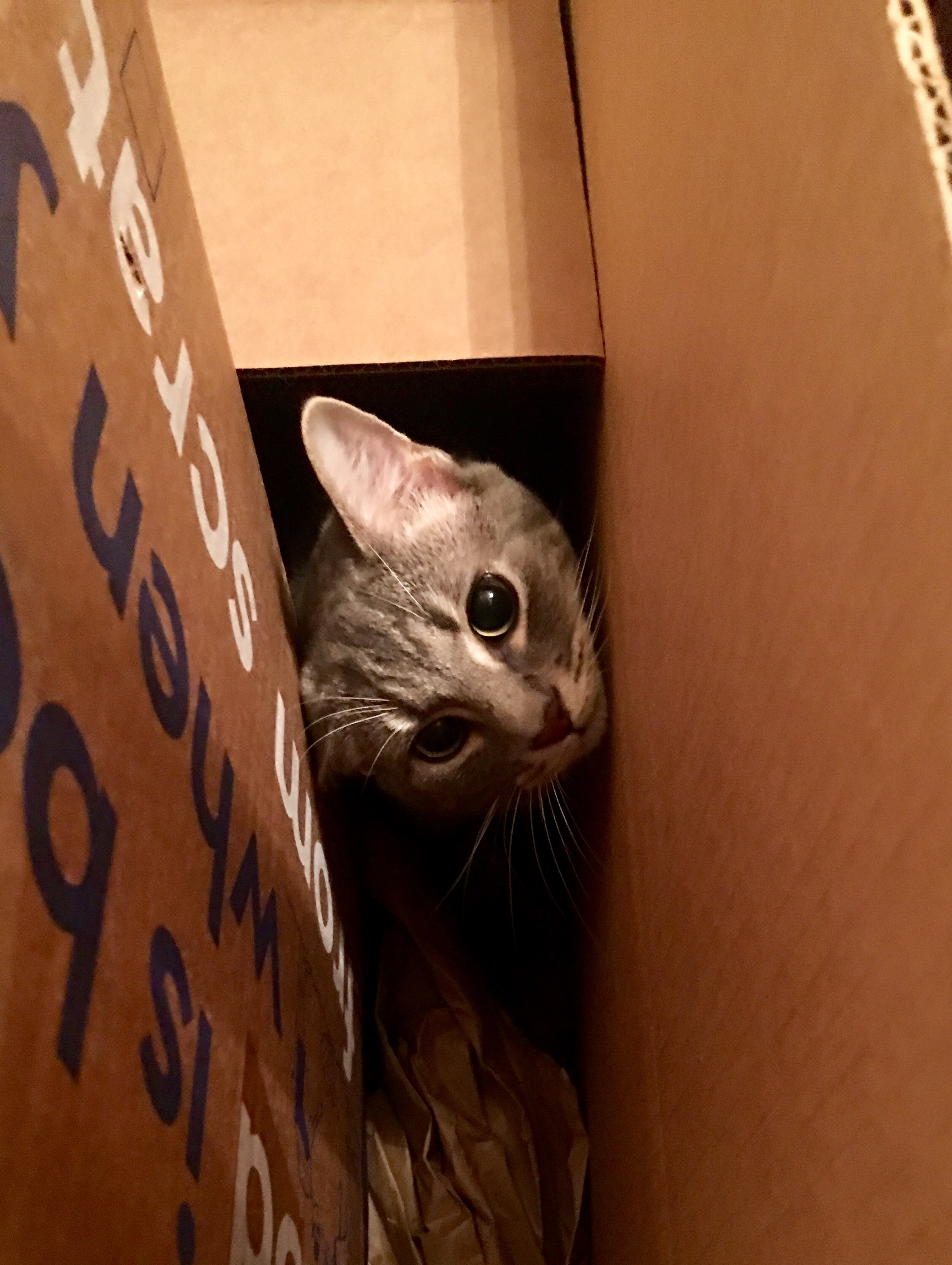 I sorted through my mounds of food on the floor. Angie gave me different colored sharpies so I decorated my Ursack which seems to be the popular thing to do out here. 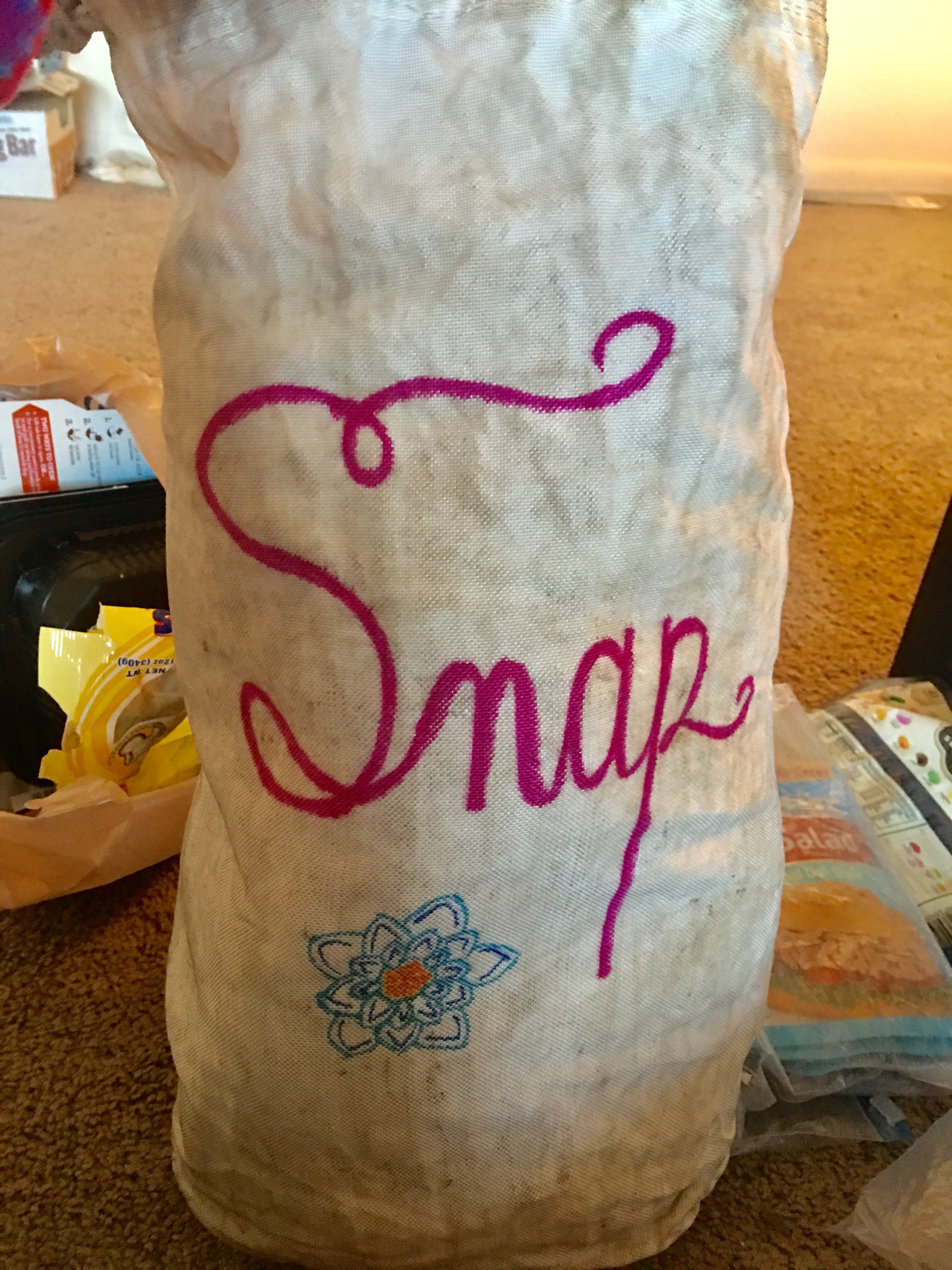 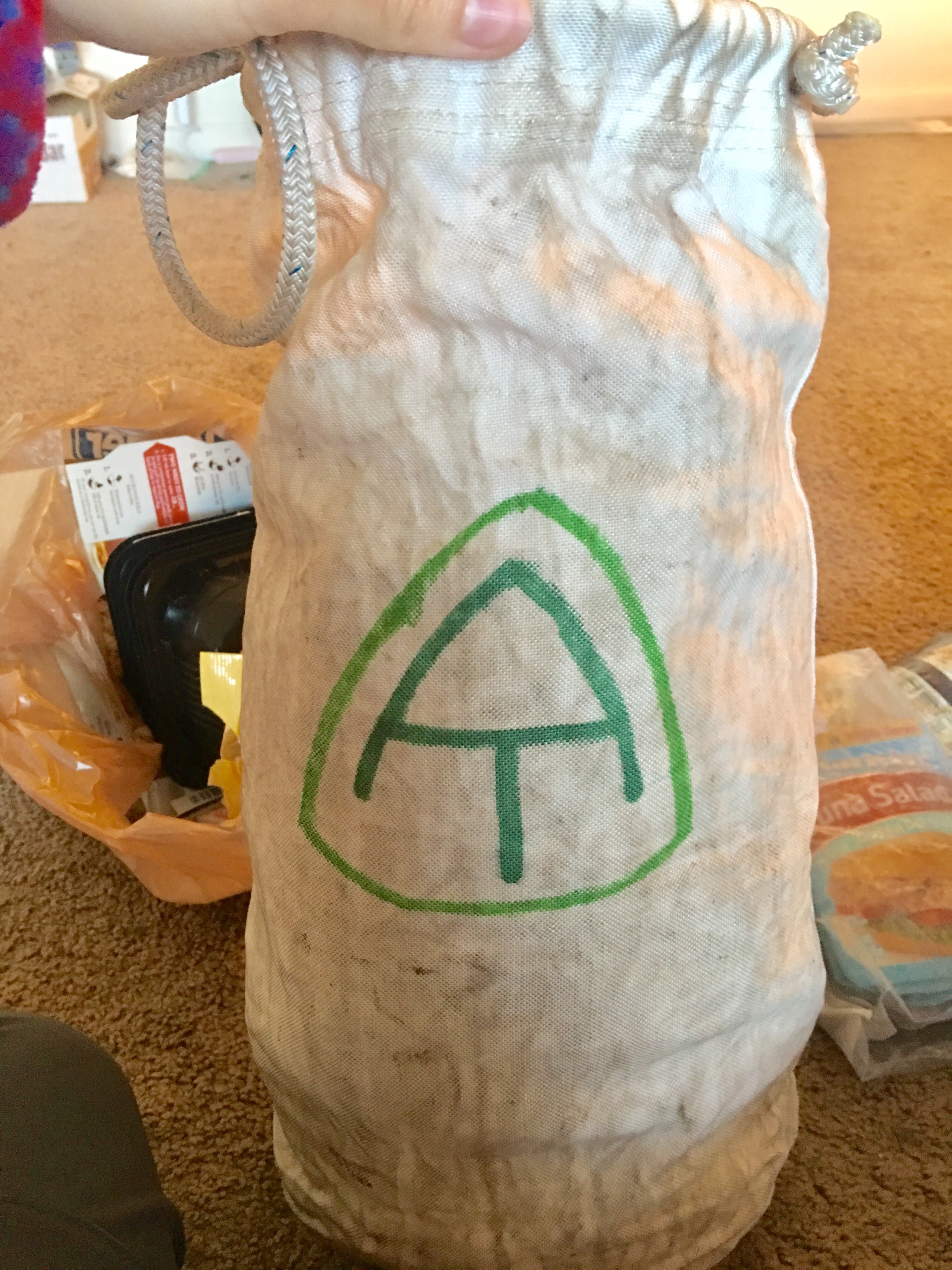 Angie came back from her cooking class with a plate of food they made! The dishes were pancit and a delicious chickpea mixture on a pita. I already had dinner but counted this as second (gourmet) dinner. We watched TV on the couch, I got my pack all sorted out, and we went to sleep in Angie’s big bed with Bandit.
Day 54, 4/20: Pearisburg -> The Captain’s campsite (21.6 miles)

We got up and had breakfast. Angie graciously drove me the 30+ minutes back to the road where we hitchhiked, and I thanked her and started up the mountain. I was nervous about changing shoes and on high alert for any hot spots. I switched the Super Feet insoles for the normal ones that came with the shoe, and that seemed to help a lot. I wasn’t in the woods for long before I descended to the road and passed under railroad tracks. 3 hikers were hanging out under the tracks, having a snack. I walked along a bridge over water with a big barricade and cars zooming on the other side. I wasn’t thrilled about being on the road and was happy when I saw the woods again. 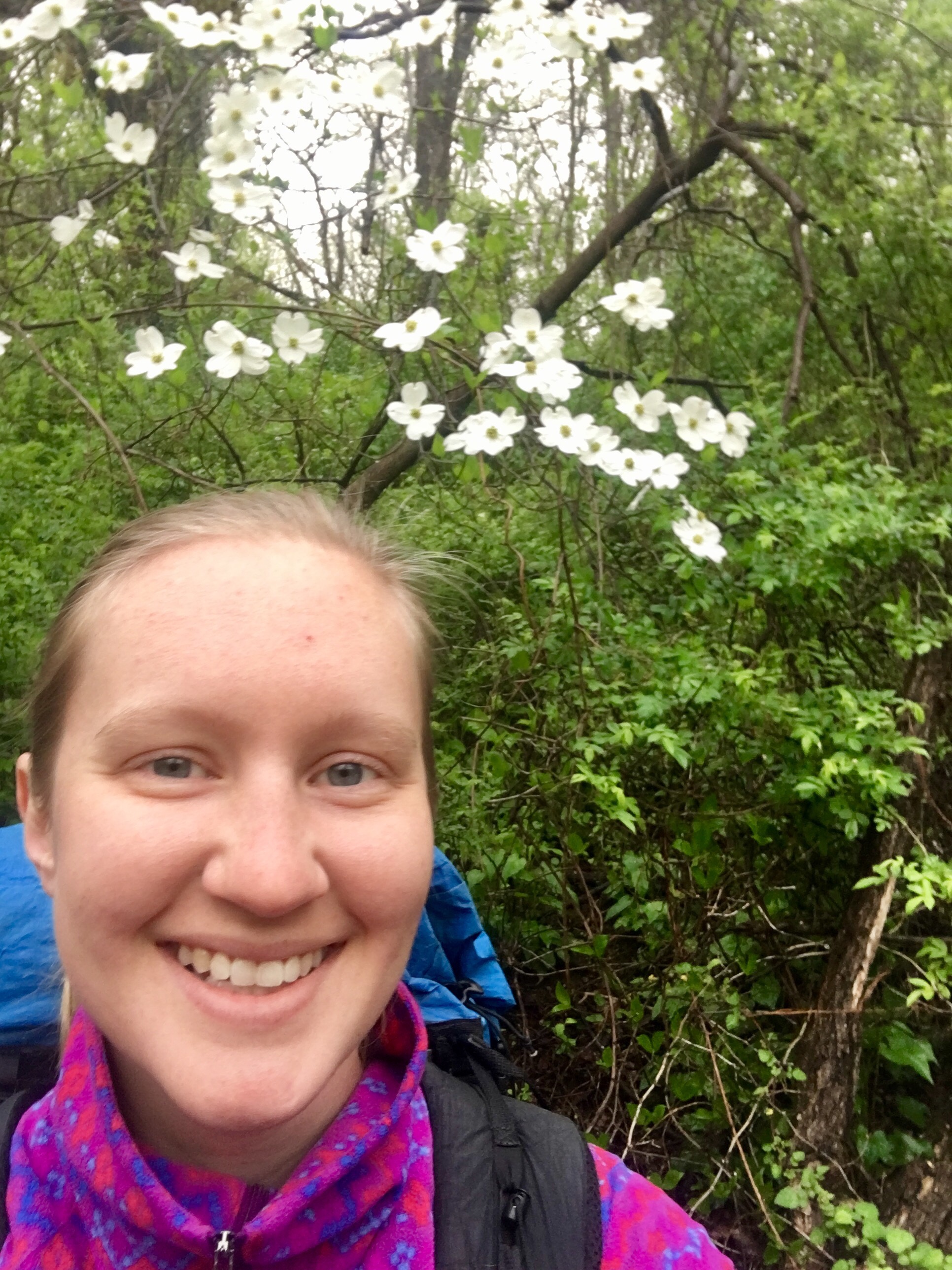 Rash, Piñata, Beetle, and Friendly Ghost stayed at Angel’s Rest hostel last night, and they were getting the shuttle to the trail sometime in the morning. I started the long climb up the mountain, and stopped at a dirt road for water. I continued along the dirt road and called my sister since my mom was still there to talk to both of them. After having a nice conversation I hung up and thought it was weird how flat it was. I thought I was supposed to have more of a climb. I checked Guthooks and my stomach sank when it told me I was 0.7 miles off trail. When I stopped for water the trail continued 50 feet on the dirt road and then up the mountain, and I had continued on the dirt road. I was kicking myself for not paying closer attention. This was the farthest mistake I’ve gone off trail. I hurried back, found the turn I had missed, and started back on the climb.

At the top there was a shelter, but I stopped for lunch on a rock across from the shelter overlooking an amazing view. I ate bread and butter and munched on snacks. I also found a tick crawling on me and killed it between 2 rocks. Beetle, Friendly Ghost, Rash, and Piñata showed up and joined me. 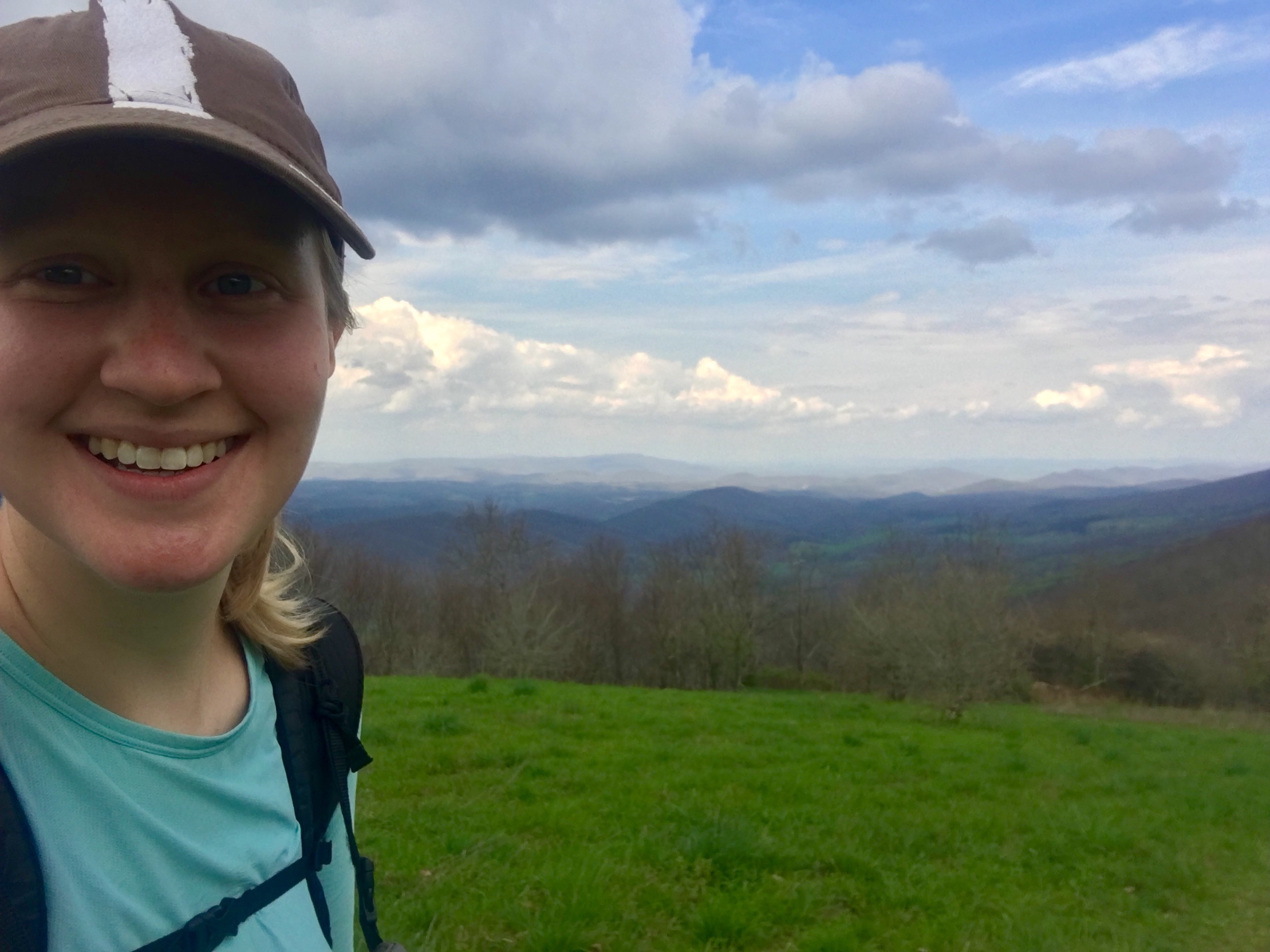 The rest of the hike went by slowly. I wasn’t enjoying the hike in the afternoon and I just wanted to be done. It was hot and my feet were absolutely killing me. I crossed back and forth across streams, and when I was close to the Captain’s Place I was rushing, trying to make it before sunset. I crossed a stream, planted my foot on a rock, and it immediately slid into the water. Now I had one dry foot and one wet foot to add to my grumpy mood. 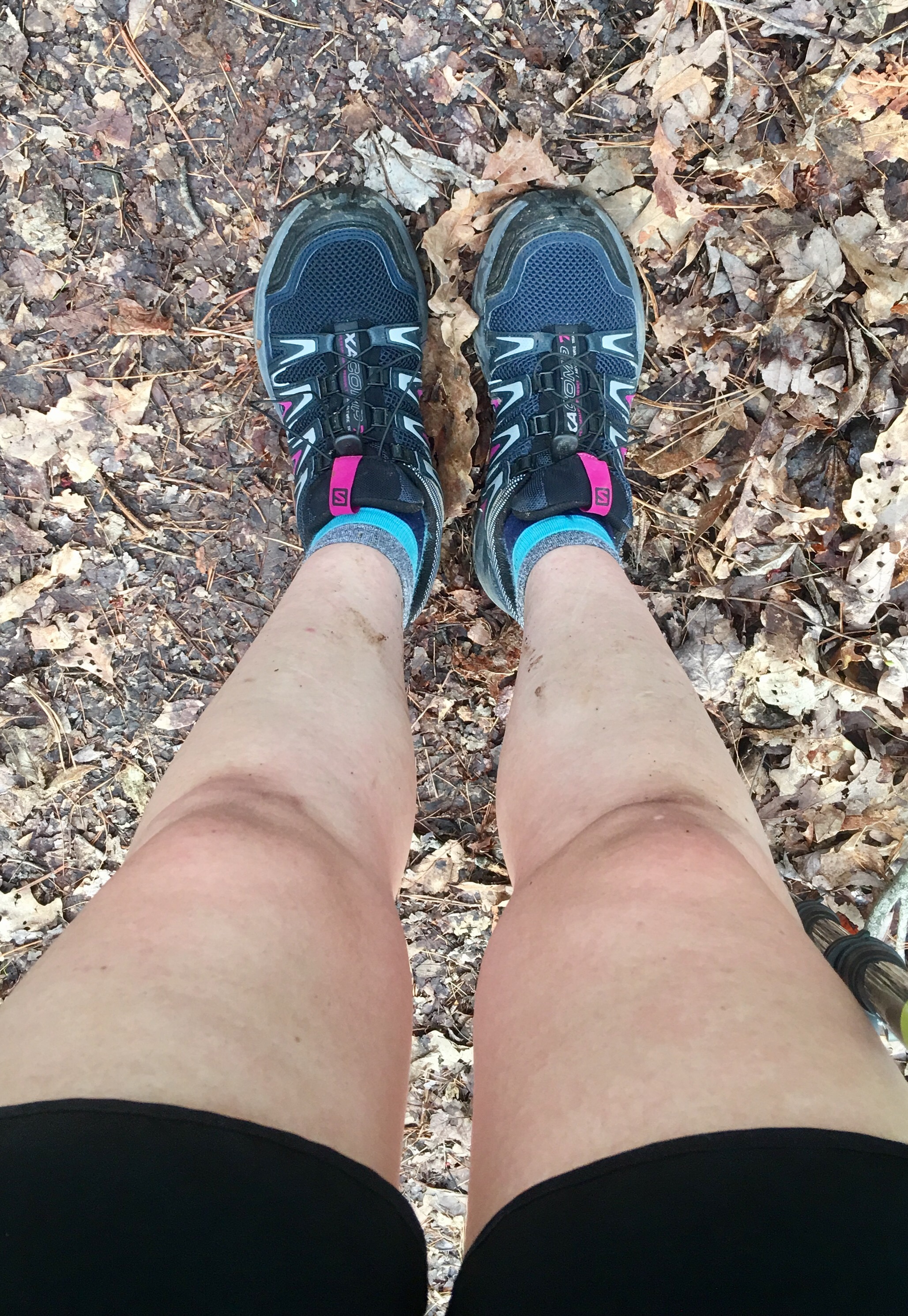 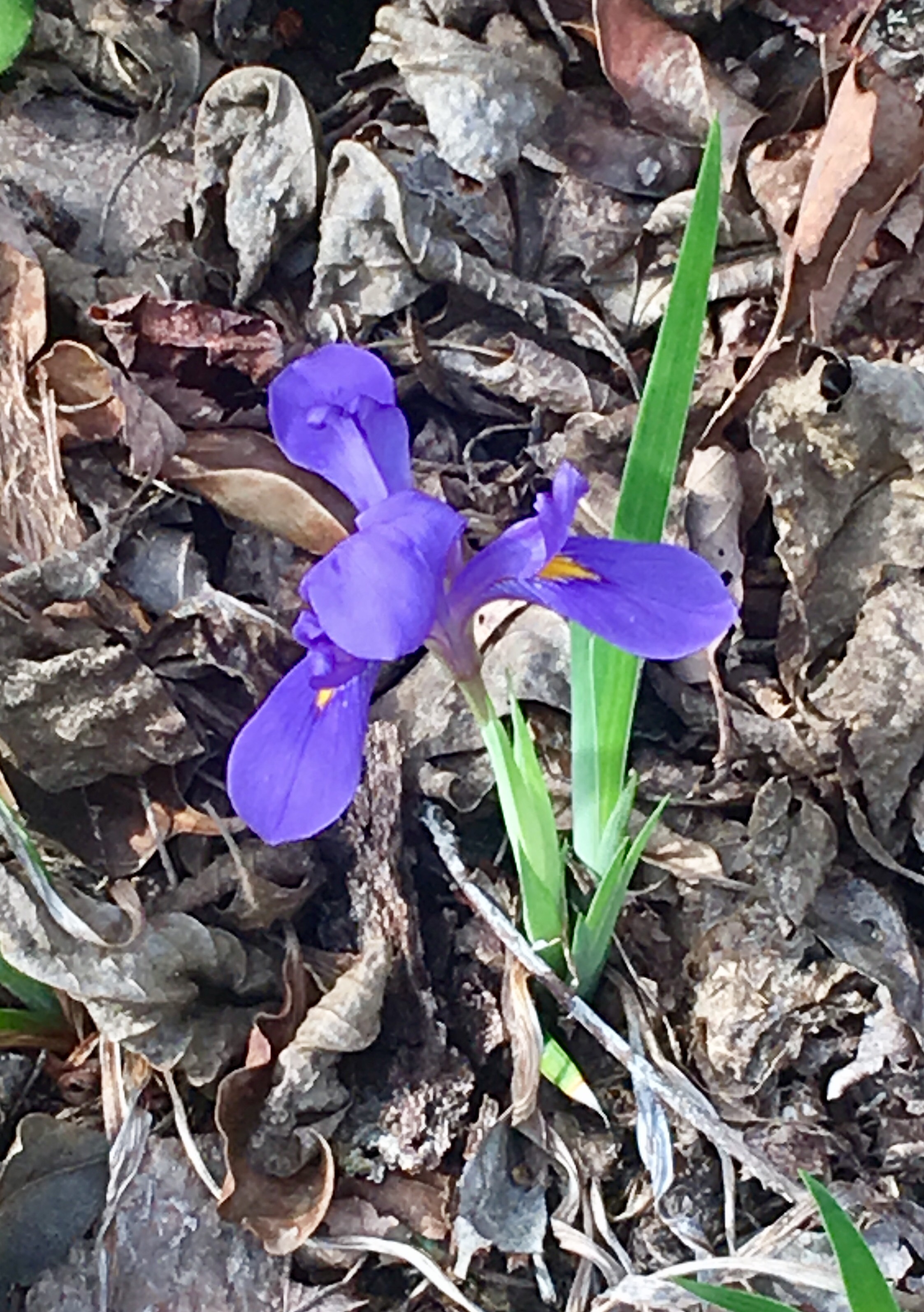 I finally got to the Captain’s Place and used the zip line to get across. Everyone was having dinner and I joined them. Beetle has lost so much weight that she uses a kitchen sponge to add volume in her hip belt, and Friendly Ghost renamed her Sponge Beetle Tiny Pants. I was really, really glad to get off my feet and be with my friends. The trail was hard today. I didn’t have any blisters or hot spots on my new shoes thankfully, but my feet weren’t used to these shoes and were aching. The Captain gives hikers free soda so I had a purple soda, ate my dinner, and pitched my tent next to Beetle and Friendly Ghost. Later in the evening a man with 2 teenagers came into camp: Squire, Remix, and the younger boy. Remix came over to talk to us for a while and drank a soda. We stayed up warming around the fire Red made before turning in.