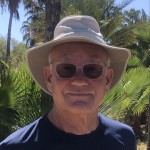 Tall Pines, Cactus, and One Big Ditch – The Arizona Trail

The Early Bird Gets to Hike

The first peaks of dawn are filtering through the blinds as the alarm blasts in my ear. It’s early here in Tucson, 5:30 AM, prime hiking time for those dedicated early risers. But I’m not one of them so rollover and close my eyes for a few more minutes. Back into my dream, somewhere on the Arizona Trail. Not that I’m ‘not’ a hiker, but those early summer hours, when the air is still cool enough to enjoy the day, seem beyond my sleepy reach. I need to work on that. Still, as I lie there my brain begins its daily rebooting and I remember the calendar needs resetting. It glares at me from the wall nearby, yearning to show a new face. It’s September 1st.

For thru-hikers the grand migration season is coming to a close.  Like the great herds of northern caribou, they sense a coming chill in the air.  Leaves are starting to lose their chlorophyll and turning beautiful hues of red, yellow, and gold.  Snow becomes a real possibility at higher elevations and peaks might already be seeing their first a dusting.  Years ago, when I lived in Alaska, this was known as termination dust, a signal to begin packing up and heading south to warmer, more comfortable climes.  So it is with most thru-hikers. Some have already completed their trek, while others can sense the end approaching more quickly. Katahdin, Glacier, Manning Park.  Thoughts of adventures coming to a close fill one’s mind.

After numerous snorts at Alexa ordering her to snooze, I finally roll out and stagger to the kitchen.  After turning on the kettle, some coffee gets dumped into the French press and I wait, trying to cleanse the sleep from my eyes.  Across the room something catches my eye.  A pile of stuff.  A pack, tent, sleeping bag and pad, stove, pot, a few clothes, hiking poles, and boxes of food – two months worth.  All the accoutrements of a thru-hiker, nearly prepped for another assault.  The pile needs my attention.

A Bit Different Here in Arizona

Here in much of Arizona life is on a different cycle than most of the thru-hiking world.  As the seasons closes for them a window is opening for SOBO ventures on the Arizona Trail, the AZT.  Get south of ‘Flag’ before the winter snows set in but not before that great heat sink to the south, the Sonoran Desert, has cooled.  After the summer monsoon rains have hopefully replenished water sources but before they once again disappear.  A few dozen hearty soles will attempt a thru-hike. Many, many more, however, will be section-hiking much of the the trail.  A busy season. 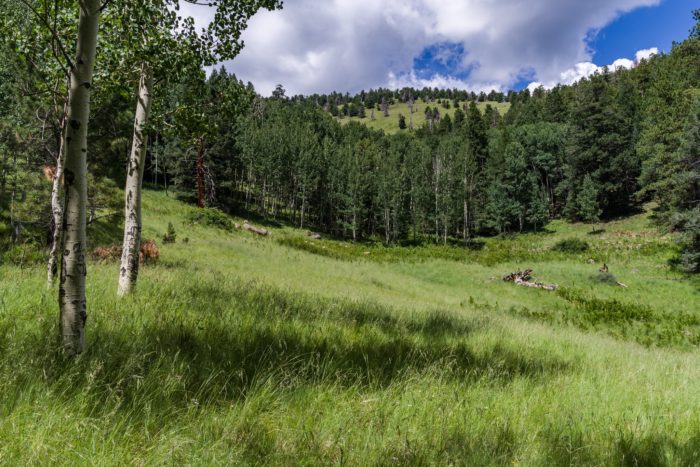 The pines north of Flagstaff.

I pour my first cup of coffee and retire to the couch and my laptop.  Perusing the day’s news updates I see that Trump is the greatest while another source says he is the worst.  Same goes for floppy haired Boris in London. Some celebrity couple I never heard of has split – again.  A typhoon makes landfall in Japan.  The 737 Max is still grounded.  The earth is still warming. I read on. Delaying tactics. Oh, to be free from this daily grind.  The trail calls.

The AZT is, in my mind, the most overlooked and under-appreciated thru-hiking trail in America, partially because at 800 miles it is one third the length of its longer kin, and because the word Arizona conjures up visions of endless desert and unbearable heat with little or no water. When I was young, growing up in San Diego, I camped often in the desert of eastern California but seldom made it across the Colorado River into Arizona. My few ventures were primarily to Phoenix to watch my older brother play baseball.  Those trips left me with a perception of Arizona being entirely like the barren sands around Yuma, or the Sahara.  It was not I moved to Tucson some years ago that I fully understood how misdirected that perception was. Only a small portion of Arizona is like those barren lands of my memory.

The AZT instead passes through most of the biomes in the contiguous United States, nearly as many as the Pacific Crest Trail and more than the Appalachian Trail.  Diversity.   Much is at 5000ft or more, sometimes reaching to nearly 9000 feet. Two ski areas are encountered, including the southern-most in the United States on Mt. Lemmon, just north of Tucson.  The trail also drops over 5000 feet right through the Grand Canyon and later through Saguaro National Park.  A breathtaking array of flora and fauna is found along the way, ranging from tall ponderosa pines and saguaro to beautiful micro-blossoms that need a magnifier to enjoy.  Bears, mountain lions, elk, deer, javelinas, on down to coati mundi, squirrels, and other small rodents and lizards.  The trail is far from void of wildlife.  Oh, yes, I can’t forget those rattlesnakes and scorpions.

It’s rather miraculous I’m even here, actively preparing for this adventure.  A little over a year ago, in a matter of days I went from hiking 10 miles to not able to walk across the room without gasping for air.  An ER visit with blood tests and x-rays resolved nothing but did point me to a pulmonologist. More x-rays, a CT Scan, and eventually a bronchoscopy finally found the culprit. A rare lung disease, BOOP. The good news, it was completely curable with a short, high dose of steroids.  Bad news, not the kind of steroids that would give me a great six-pack. However it did not yield easily, and last spring I was back in with what I thought was altitude related issues only to discover the BOOP was back (or more likely never fully left.) Another course of steroids with all the appropriate warnings and prudence.  A month ago I  walked out of my pulmonologist feeling the best I had in years and, hopefully, finally cured.  He gave me a cautiously enthusiastic endorsement of my hopes. with lots of cautions and guidance. The Arizona Trail was about to move beyond just hopes to a real plan!

I pick up my coffee, grab a granola bar, and wander over to the pile of gear.  Sitting on the floor I start stuffing all the things that make up base weight into the pack.  It’s a very dry year so I may have some heavy water carries.  I want my base weight as low as possible.  I try and balance the loaded pack on the scale but can’t see the numbers, so hoist it on my back and step on the scale.  Then again without the pack and mentally calculate the difference.  Sixteen pounds.  Too much.  What gear can I reject?  That’s for later.

Originally conceived by Flagstaff schoolteacher Dale Shewalter in the 1980’s, the Arizona Trail today is well managed and maintained with a strong volunteer organization, the Arizona Trail Association.  While the various government agencies and land managers have overall responsibility, the Association handles most of the day-to-day coordination, with funding from many sources, but primarily driven On the ground by user support. The trail itself, unlike many others, is intended to be non-motorized multi-use, with hikers, equestrians, and bicycles all welcome.  It is supported in Guthooks with a separate map for bicycles that include bypasses around wilderness and other restricted sections. The Arizona. Trail, in essence, is a well developed, well managed trail. The Arizona Trail is Awesome.

Finishing the last of my coffee I accept I have sufficiently wasted the morning until its too hot to hike, so must face the despised treadmill. Heading off to the fitness center, today will be two hours, six plus miles at a 7% grade, giving me over two thousand feet elevation gain.  I will also carry my day pack loaded to 25 pounds.  A good workout, but boring, very boring. However, I will fill that time with hiker podcasts, and as luck would have it, Zach has just uploaded a new episode of Trail Correspondents.

One last thing – that big ditch? The Grand Canyon makes it’s appearance between SOBO mile 75 and 100, well before my trail legs will have arrived!

Postscript – It’s two weeks later.  The temperatures have cooled and the call of the trail, with that beautiful dry, fresh, Arizona air, grows stronger.  Goodby you mechanical, torturous, hiking machine! 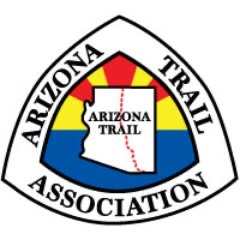 I’ve tried and enjoyed a lot in my life. This includes many years in Alaska, exploring, hiking, mountaineering, skiing and boarding, and ice climbing, two years in Greenland, several years living and sailing solo on a wooden sailboat in the PNW, motorcycling around the country and Europe, most recently a month riding down Baja, and now thru-hiking. My first ‘thru-hiking adventure, however, was when I snuck away from home at 19 and solo hiked the JMT, long before permits, gps, water filters, and other hikers. Ohhh what a trip!