Today was a day full of amazing views. About a mile into my day, a ridgeline was visible to my left. That lasted for a miles or so and then I hiked into a tunnel of short brush. A few times there were some paths for vistas which were open views of a jagged landscape of mountains. The way these mountains look remind me of the way their creation is told by Indigenous peoples. It is told that a giant bird made with their wings. This bird would carve valleys on the down flap and paint the mountains on the up flaps.
After some smaller inclines, the trail shot up very steeply and then turned into rock scrambling, which meant I was headed up Albert Mountain. It was a fun way to break the monotony of just walking.
The next half a mile was super inspiring for me because I was listening to a podcast about the making of the album To Pimp a Butterfly. The episode I listened to was about Kendrick’s childhood, which led up to his career in rap music. It was also about his time in Africa and how being there revolutionized his ideologies and opened his world. I was listening to the part about his time in Africa as I was climbing up Albert mountain and got the first view. It brought me to tears of absolute joy; I couldn’t believe I was where I was doing what I was doing. The biggest takeaway from the episode was that your experiences and knowledge don’t matter if you don’t utilize it and share it with others. That really resonated with me and made the moment incredibly special.
Shortly after that I got to the firetower and the official 100 mile mark! It was an excellent moment because when I rolled in, there were close to ten people relaxing who applauded me upon arrival; I thanked them profusely. The rest of the day was just walking down into the next gap. I met a wonderful older gentleman who gave me a Snickers, which totally made my night. I also met a SOBO hiker who I only had one question for: “Do your knees ever stop hurting?” He said they will stop hurting as they get stronger, but I don’t know if I believe him or not. I’ll have to update y’all on that one… 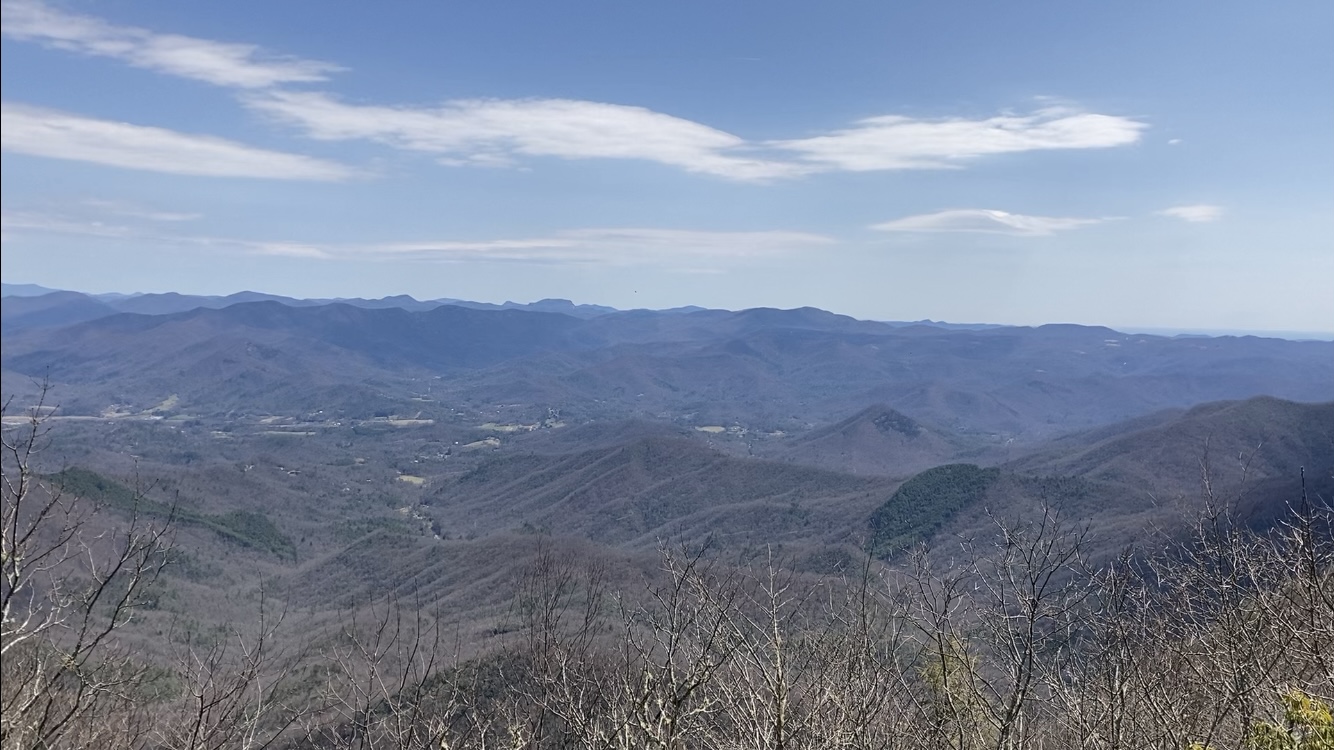 This is the first view right before you actually peak Albert Mt. that I reference to! 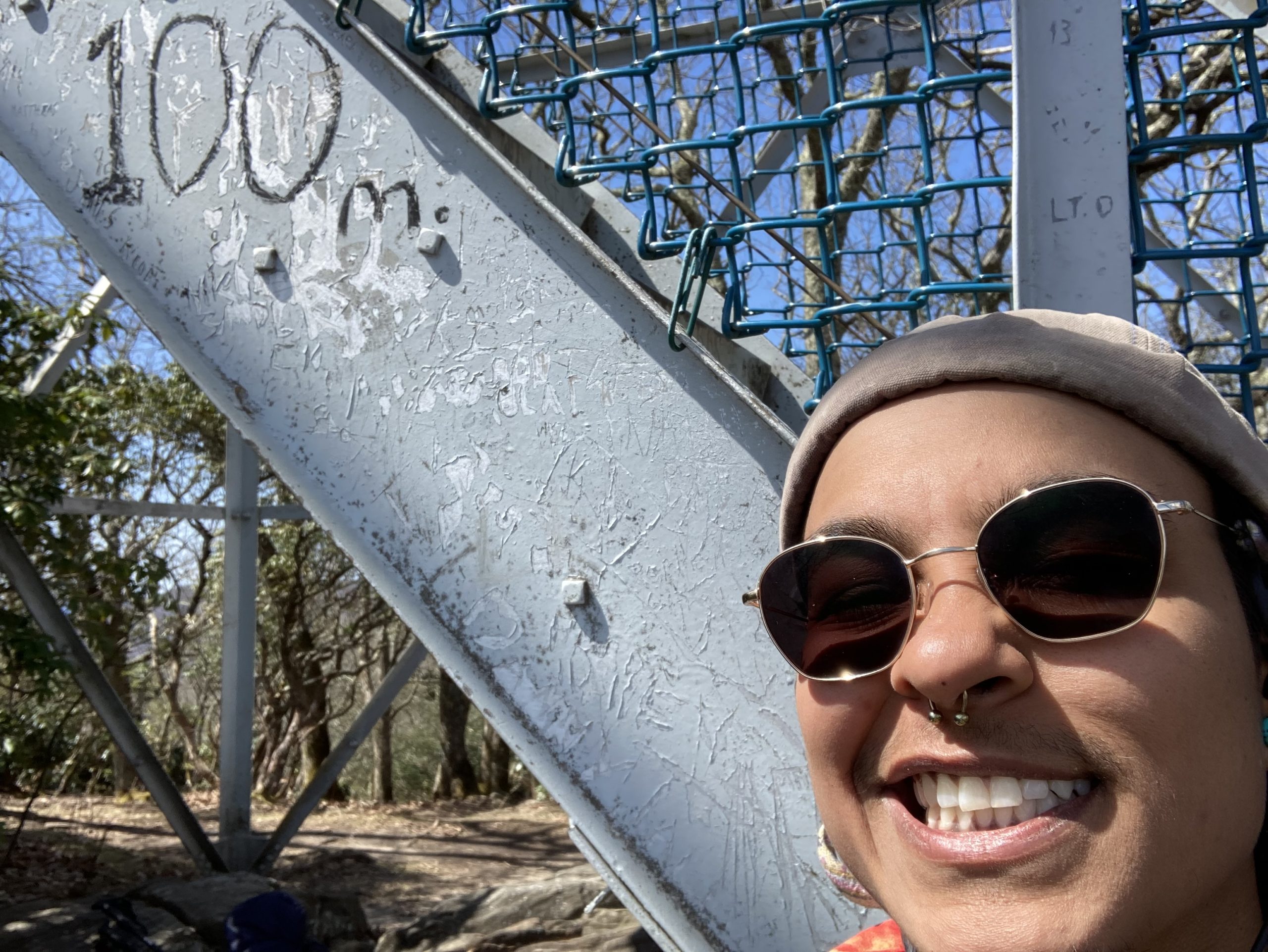 This day was the most significant one I’ve had on trail so far. Since it was a shorter day, I slept in a bit and woke up to the sound of a turkey. It also ended up being a pretty easy day as well. During the first few miles I passed a couple squirrels who looked like they were fighting, which made me chuckle. At a road crossing four miles in, there was a sign that said “Standing Indian Campground” and as I was standing there a truck passed by. I don’t think he knew how ironic of a moment he witnessed there.
(As a side note, I do not identify as “Indian” due to my Indigenous ancestry. The term is an inaccurate way to refer to people who are Indigenous to the modern day United States of America. It is a word I will use for circumstances like these where a location has that specific name or for other official terms.)
From there, the only thing between me and the next road crossing was a mountain. With headphones in, I began to book it up one side. I was listening to an episode of a podcast called This Land that told the untold story of Mayor Ridge and his son John Ridge in the episodes Ilistened to. They were two men from the Tsalagi Nation (this is who were termed Cherokee in the American lexicon) who fought tirelessly for their right to sovereignty and to remain on their ancestral lands. The whole story would take too long for this post and I don’t want to summarize it because I would not be able to honor the truth of their story this way (for those interested, the specific episode of the podcast is called 4. The Treaty, but the whole series is very informative!).
The reason I mention this moment is because it was through hearing their story that I cried about the Trail of Tears for the first time in my life. I did research about the Tsalagi nation and subsequently the Trail of Tears before coming on trail. However, it wasn’t until I heard their story that the gravity of the forced walk hit me. It felt good to feel this though so that it was something I could begin to move through. It was the most significant moment I’ve had so far on trail.

The day before, I had missed the outfitters by an hour. So, when I got up I needed to go into town before I got on trail. Long story short, it took a much longer time to get onto trail this day than I had anticipated. What I’ve come to learn is that the trail rarely happens the way you would expect. However, it’s all part of the journey.
I shortened my day to the next available campsite. After crossing the road, I was first greeted by a beautiful little waterfall! The trail started to look up on me, but after climbing up and over Siler Bald, I developed a bad lower abdominal pain. It made my day of hiking feel worse. I couldn’t figure out what was causing the pain, but picking my pack up did relieve it because of the shift in my hip belts. I did this for most of the hike up to the next campsite.
When I got to camp and took my pack off, it felt much better. I then figured out that the problem was that the hip belts were pushing my belt into my lower abdomen. I was able to adjust things and it fixed my problem! Once I got to the campsite I knew I had to really hunker down for the storm coming that night. Sometimes all you can do is stake yourself down the best you can and hope it all holds down. My first truly solo camping experience was certainly quite the ride. 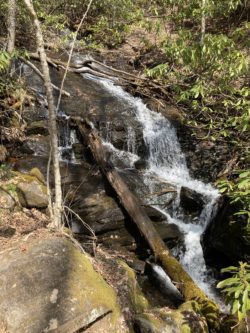 Here is the waterfall that greeted me this day 🙂