Attention Incoming Thru-Hikers: It WILL Get Easier!

I can’t help but pull my car over anytime I cross paths with the AT. No matter what, I feel compelled to hop out and give a white blaze a high five before moving on. The force is that strong. When I step onto the AT, even if only in passing, it feels like home. Whatever stress I  may have been carrying is momentarily suspended for a grin. And always, no matter the season or the weather, I immediately wish I could strap on my trusty pack and head back into the woods. But the AT didn’t always feel this comfortable — least of all in the beginning. 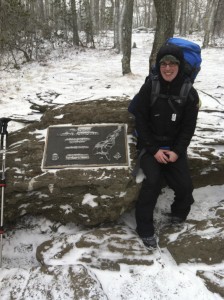 If you’ve just started your hike this season or are eagerly (and anxiously) anticipating your upcoming hike, here are some things that I promise will get easier the longer you’re out there.

1. Setting Up & Taking Down Camp

Prior to hiking the AT, I’d only ever gone on two backpacking trips. I could barely count the number of times I’d spent sleeping in the backcountry on two hands. In the spirit of full disclosure, I’d never done a backpacking trip in which I’d had to carry my whole pack up and over every mountain – I’d only set up base camps and done out and back day hikes.

I began my hike on the AT with a cousin who had much more experience and could show me the ropes. Still, we were shocked at how long setting up and breaking down camp took each day. Awkward is the best way to describe how everything felt. Setting up the tent: awkward. Packing and unpacking my pack: awkward (and often uncomfortable). Collecting and treating water: awkward. Digging catholes: awkward. 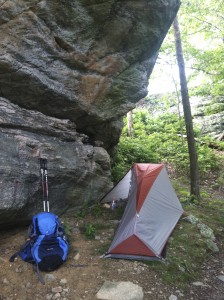 So simple, yet so complex.

Now, with more thru-hikes under my belt, I can safely say that each time I return to the woods after a long time away, I find the first few days feel awkward all over again. The vast majority of thru-hikers will also be attempting this kind of feat for their first time, so know that you are in good company when you feel insecure, inadequate, and straight up goofy. Here’s the thing: no one will really talk about it in the beginning, but it will be fun to laugh about later.

Initially, setting camp up or breaking it down was an event, each lasting well over an hour. I now comfortably do either in thirty minutes or less, and if pressed by weather to move faster, I certainly can. And you will too.

My first “shake-down” had nothing to do with the contents of my overall pack. It focused solely on my food bag. Tons of macadamia nuts, almonds, a jar of peanut butter, piles of Snickers and Little Debbie brownies, thirty packets of Emergen-C, Clif Bars, tortillas, pasta sides, a block of cheese, a bag of Wheat Thins, and several others snacks hid what was once a double bed in a motel room.

I had a neurotic fear of running out of food. As a more seasoned hiker scanned my bounty and asked how many days of food I was carrying, he balked when my reply was, “Ummm…four?” The simple answer: I was carrying too much food. My buddy had no qualms about the kinds of food I carried, just how wildly out of proportion it was to what I needed. What I had in my backpack could easily have lasted for closer to ten days. In fact, I didn’t carry this amount of food again until the Smokies and the 100 Mile Wilderness. 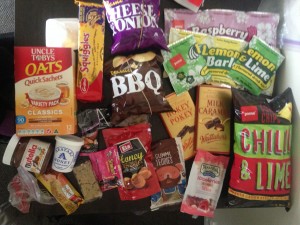 This is a classic rookie mistake, and one that I often repeat when I start new thru-hikes. Ultimately, only you can be the judge of how much your body really needs, and it will certainly increase over time. But when beginning, ask questions and learn what has worked for others. There’s a good chance that this baseline will work for you too.  If you’re walking into town with anything more than scraps in your pack, then you’ve just carried dead weight for miles and days.

In the weeks leading up to my hike on the AT, I familiarized myself with the Pocket Rocket. I cooked various trail meals on my back porch in an effort to become more comfortable with both the stove and the “good” eats of backcountry living (see: taste testing pasta sides, instant quinoa concoctions, and dehydrated soups). Despite this preparation, I found myself forgetting everything at Hawk Mountain Shelter my first night on the trail.

Our start date in 2013 coincided with a three-day cold front (a common occurrence that year). It was below freezing and snow had intermittently fallen throughout the day. I was overcharged with adrenaline, my mind buzzing with firsts: that night would be the first time I put my new sleeping bag to the test, the first time I’d ever slept outside in temperatures this cold, and the first night on the AT. I was also still reeling with the reality that I’d just flown with a one way ticket to Georgia and was attempting to walk thousands of miles home. Whatever skills I possessed froze right along with everything else.

With cold fingers fumbling to connect my stove to the fuel cannister while wearing bulky gloves, a kind hiker leaned over to quietly remind me to make sure the fuel valve was closed tightly (it was not). My cousin helped provide wind protection so I could light my stove. Ultimately, I cooked entirely too much food and sat eating a pasta side long after it had turned into a cold congealed lump. It was mortifying.

As with everything else, it got better. I learned to read the wind, creating natural screens for my stove. I always checked the fuel valve to make sure it was closed. On cold nights in the spring and fall, I slept with my fuel canister (as well as my phone, batteries, and Sawyer Squeeze) so my equipment would work optimally. Even cleaning became a breeze once I learned to reserve some leftover water and bring it to a quick boil after dinner for a rapid swish-and-fling to clear out the pot without a sponge or towel. 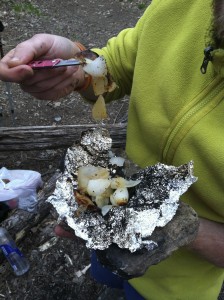 Essential hiker hack: when leaving town, take a small bit of foil and a fresh veggie or two. Wrap it up, toss it on the coals of a fire pit and DEVOUR. Fresh food!!! An onion never tasted so fine…

Pain will be the new norm. It’s okay. It doesn’t mean you’re broken. You will be putting your body through the proverbial ringer for the next 5-7 months. It will likely be more intense than anything you’ve done before and, accordingly, it takes time to adjust.

This is not to underplay injuries — trust me, I had plenty: runner’s knee, shin splints, and a severely sprained ankle. So again, it’s about learning to read your body. It’s important to know when popping some Vitamin I (ibuprofen) will do the trick, when taking the time to dunk your feet into a stream to naturally reduce inflammation is worthwhile (almost always), when to take some zeros for proper rest, and when to head to the doctor. 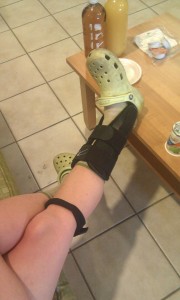 Injured, but not broken. Hike on!

Injuries aside, you will acquire a hiker hobble. Every morning, you’ll likely wake up sore and find the first steps of your day to be characterized by a very specific gait: a strangely staggered mess of joints and muscles that, at first, appear defunct. After a short time, your muscles will warm up and walking, the one thing you’ve now been doing for months, will feel natural again.

Honestly, this one never gets much easier. But it’s always hilarious. And once you can embrace that fact, you’ll feel much better about yourself and you won’t feel as bad laughing at someone else’s expense.

In the south, many shelters have an incredibly easy bear bagging pulley system. This you can master and you should. I, admittedly, had never seen this contraption before hiking in the south and had to ask a hiker for help to hang my bag during that first demoralizing night on the trail (Here’s another thing – you’ll stop feeling embarrassed about asking for help. How amazing is that?). In the Shenandoahs, you’ll encounter the bear pole. Again, you will never look cool maneuvering the bear pole, so swallow your pride, expect to be thrown off balance, and laugh. The AT is ever humbling. 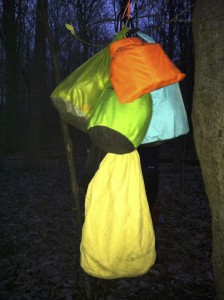 As for the rest of the trail and bear bagging: you’re on your own. Finding the perfect branch will become easier, and it may take less tosses to get a line where it needs to be. But sometimes, it will still be hard. And definitely frustrating. Why suffer alone? Invite your friends over to watch and take bets on who can get the bag hung first. Among my tramily, we spent months discussing Hiker TV. If memory serves me correctly, Channel 1 was Bear Bagging, followed by Watching the Fire on Channel 2, Sunsets on Channel 3, etc. 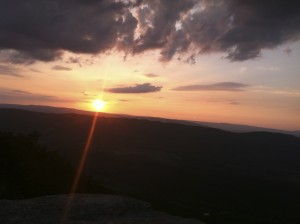 Take heart, the uncomfortable will become comfortable. And when it does, it will be so utterly (astonishingly) simple and satisfying.