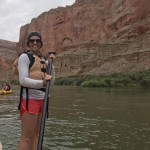 Announcing an FKT Attempt by a Very Average Thru-Hiker

I completed the PCT in five months and four days.  While I went straight through the Sierra with the high snowpack, it still took me five months and four days to finish the trail.  That means I hiked at a pretty average pace.  So, when I say that I am attempting a self-supported Fastest Known Time (FKT) of the Arizona Trail (AZT), it will sound pretty crazy to a lot of the people who I hiked with.  I mean I took FOUR ZEROs in Kernville alone.  That’s almost 20% of the time it will take to FKT the AZT.  My longest day on the PCT was 50 miles, and my second-longest day was 40.1.  The longest I ever went without a zero day was nine days in the Sierra.  For this FKT I will have to average roughly 42 miles (without resupply miles) for 18 days in order to actually FKT the trail.

Part of me, OK all of me, just wants to try to let people know at the end if I actually got the FKT.  Apparently, that’s not exactly how the FKT process works.  On Friday, October 18, 2019, I announced my intentions on the FKT website to attempt the female self-supported FKT starting on October 23, 2019, which was a terrifying step.  Terrifying because if I fail, EVERYONE will know.  At least everyone (or a fair number of people) in the thru-hiking community, which is still pretty terrifying.

Falling short of goals sucks.  I grew up swimming and swam Division 1 for the University of Nebraska.  My two goals every year for four years was the same: Qualify for the NCAA Championship, and make the top eight at the Big 12 Championships.  I never actually achieved those goals.  One year I got ninth and another year I hovered around the consideration time for NCAAs, but I never got to swim in the meet.  My two biggest goals in the sport that I competed in for 14 years of my life I never actually achieved.  It left me feeling empty when I retired from swimming (at the end of my NCAA eligibility).

FKT attempts are the same way.  When I am done with the AZT no matter what I will still have finished the trail.  But if I don’t get the FKT I know at the end of the day that will leave me disappointed.  It’s one thing to go out and be disappointed,  it’s another for the whole entire world to know I’ve let myself down.

The other big fear for me is what other people are going to think of me in general.  Mainly the question, “What makes her think she can actually do that?” or a variation of that phrase is constantly wandering around in my brain.  I have a lot of confidence in myself and my abilities.  At least in my head I am a great person, super athletic, and very capable of this attempt.  Projecting that confidence to the world, not so much.  Hence my fear that people will think that I am not capable of reaching this goal.  Last thing I want is for random people in the thru-hiking community to s*** on my attempt.

But alas, here I am.  A completely average PCT hiker trying to be above average on the AZT.

While I understand that trying to FKT a trail is not what everyone is looking for, I found one thing interesting on the FKT’s website.  There are way more men than women trying/chasing/completing FKTs (at least on the mid- to long-distances trails).  Understand that I didn’t go through all of the trails to get the actual statistics on this.  Just seems like there are quite a few routes where there are none for the women (example: the CDT).

Ladies out there: See if there is a route in your area without a record or a record you are capable of.  Challenge yourself, dream big, and set some records.

I left my job working on the railroad (all the live long day) to hit the PCT as part of the Class of 2019, because what better what to celebrate my dirty thirty? And then, I couldn't get enough of the hiker trash life, so it's the Arizona Trail or bust.