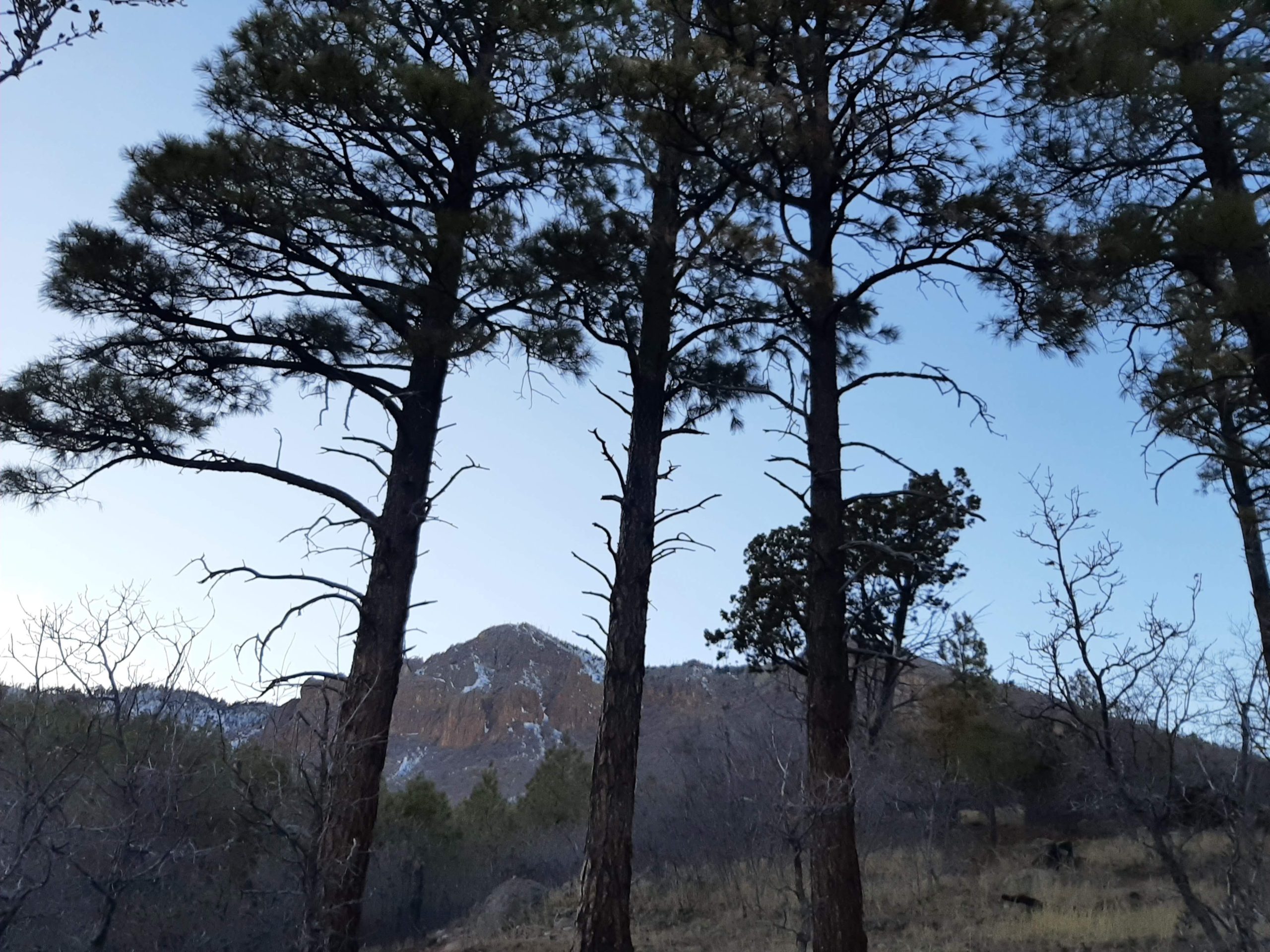 Little Elden Mountain as seen from the south. The start of Passage 32 winds around the side of this small range.

If, after finishing your travels past the San Francisco Peaks, you opt for the equestrian bypass, you’ll end up behind Elden Mountain. Despite still being very much within the Flagstaff area, it feels remote and –to an extent–unexplored. How much of this is due to the snow and winter cold I went out in remains to be seen. Even if better weather brings in crowds, however, this passage has enough geological and cultural beauty to make the trip worthwhile.

Length: 13.7 miles, one way
Expected Completion Time: 1 day (if thru-hiking 20-30 miles/day), 2 or 3 days (if day hiking 4-6 miles/day)
Location: Weatherford Trailhead just above Schultz Pass Rd to just south of the Cosnino Road exit off I-40. More generally, Flagstaff.
Trail Type: Out and back
Scenery: Montane conifer forest with a little bit of grassland. The main feature are these mountains, which introduce a variety of stone.
Terrain: Easy. There’s a bit of a slope toward the northern end, but otherwise the trail stays flat and smooth.
Navigation: The trail in this section is a narrow dirt track, and is, for the most part, well-signed.

As you round the side of Little Elden, the trail becomes more difficult to pick out from all the side trails in the network. I’m not sure how much of that difficulty came from things like snow or reroutes, but I found it especially useful to have my phone’s GPS up and ready to check throughout the hike. The trail is still fairly well signed and many of the wrong turns I made left me close to where I needed to be. Did still make me a little nervous though. 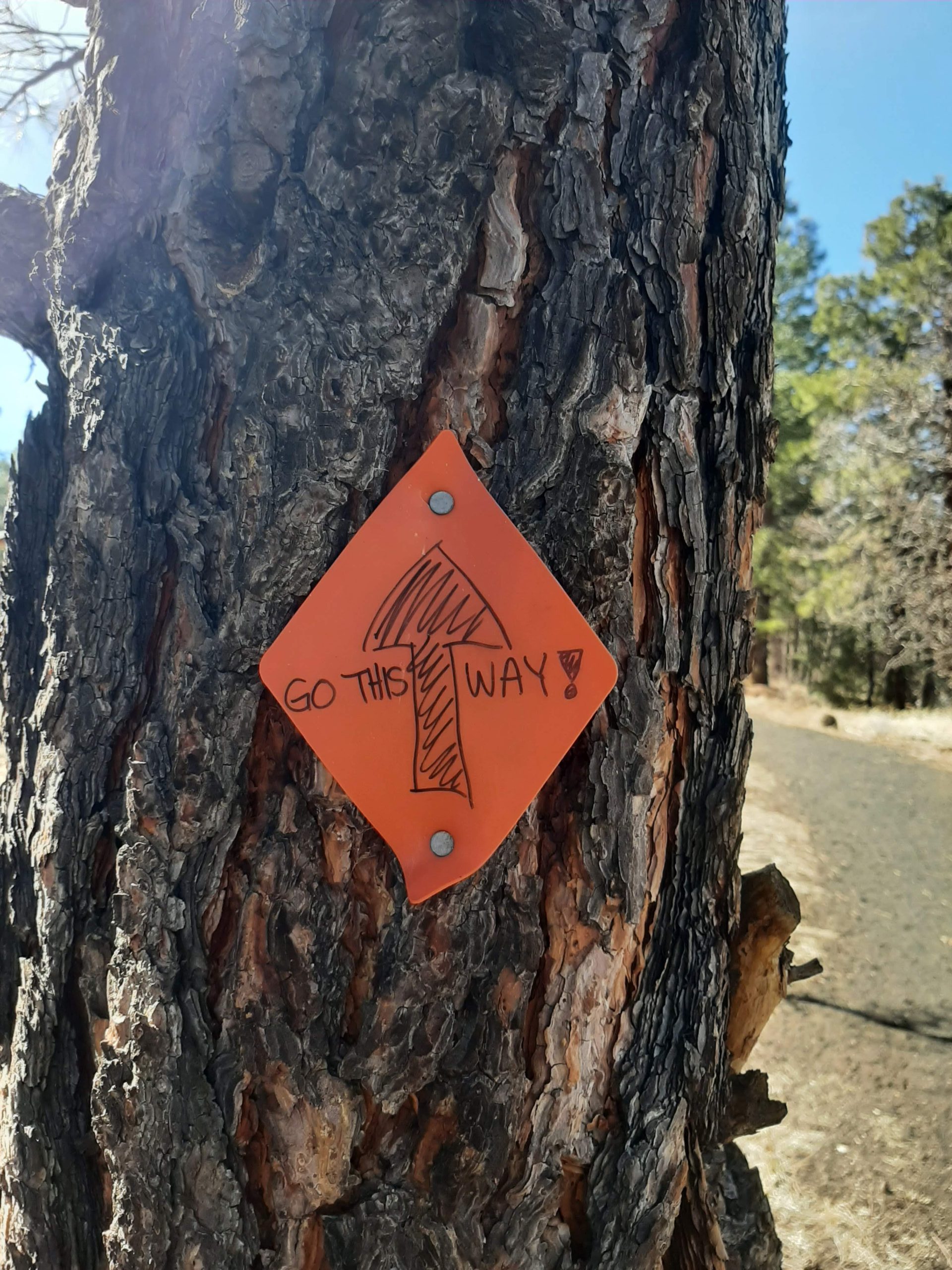 A reroute through Picture Canyon makes for some charming signage.

The northern end of Passage 32 is off Schultz Pass road (also known as FR 420) in Flagstaff. Less than a mile after the turnoff from Fort Valley Road, the pavement ends and the road starts to move gradually uphill. Follow it for about miles until you reach the Weatherford trailhead, and then head to the southeast, following signs for the equestrian bypass.

To get to the southern end, head east on Interstate 40 just below Flagstaff and get off at Cosnino Road (Exit 207) . Two immediate right turns lead to a frontage road where there is space to pull over and park. The AZT crosses this road about half a mile in.

Either direction works on this trail, though I’d probably suggest heading south. (Unless you’re starting in winter, when Schultz Pass is closed.) This starts you off in the middle of the action, so to speak. You’ll first round the mountains and pretty soon after head into historic Picture Canyon. The southernmost parts, while enjoyable, don’t have quite the same density of points of interest. 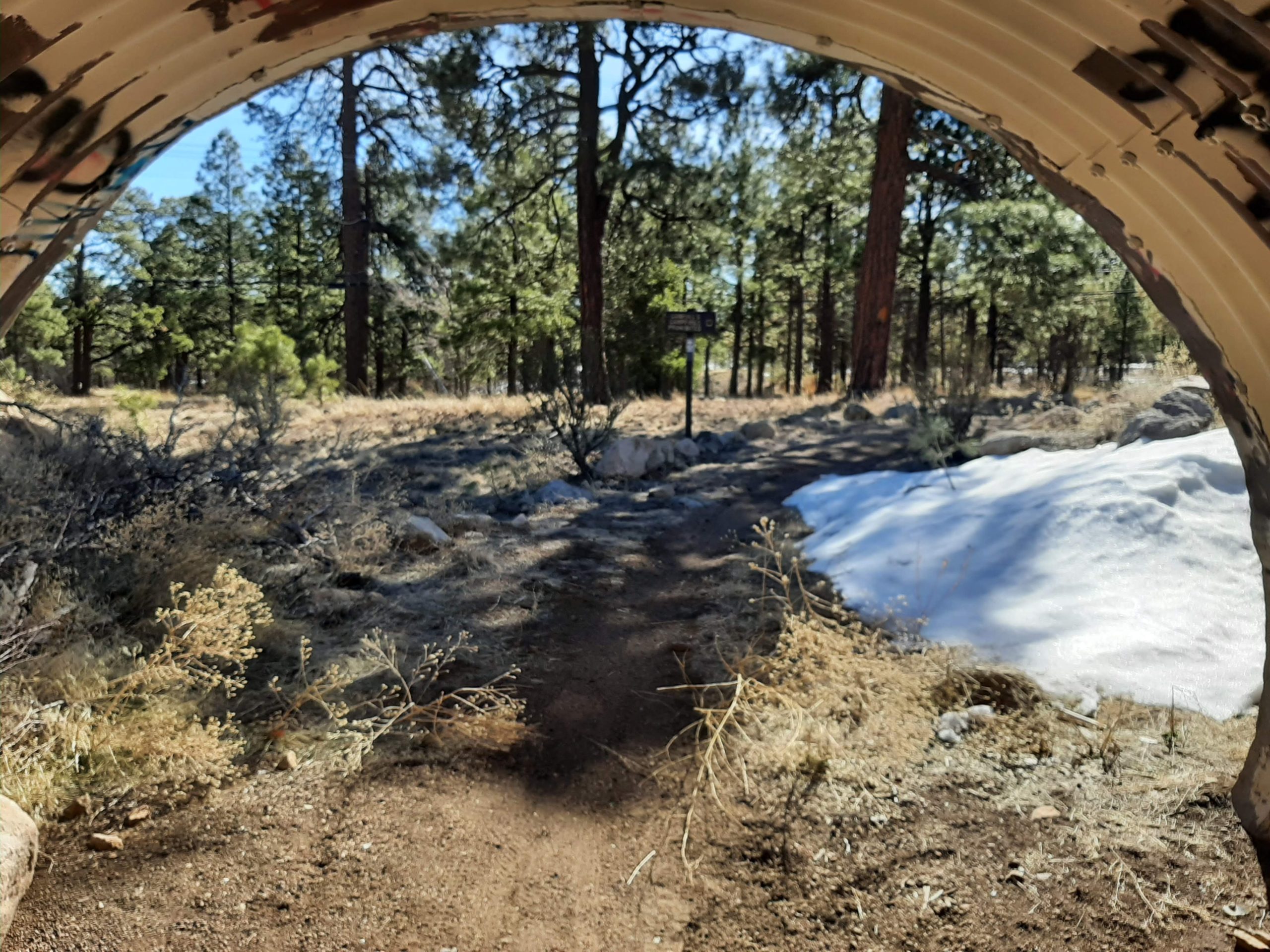 The pedestrian tunnel under Highway 89. I’m not sure why, but I find even the smallest tunnels thrilling. This passage has multiple.

Much as I love Flagstaff proper, I think Passage 32 is the way to go, provided you don’t need any new supplies. I was surprised both by how easy-going the trail was and by how remote it felt. For day hikers, the number of side trails leading to landmarks like Mount Elden and Picture Canyon mean many opportunities for exploration. While I clearly enjoy a longer push forward (wouldn’t be doing this otherwise), I really found that I wanted to take my time on this section. It feels expansive, like there’s a lot more to see. 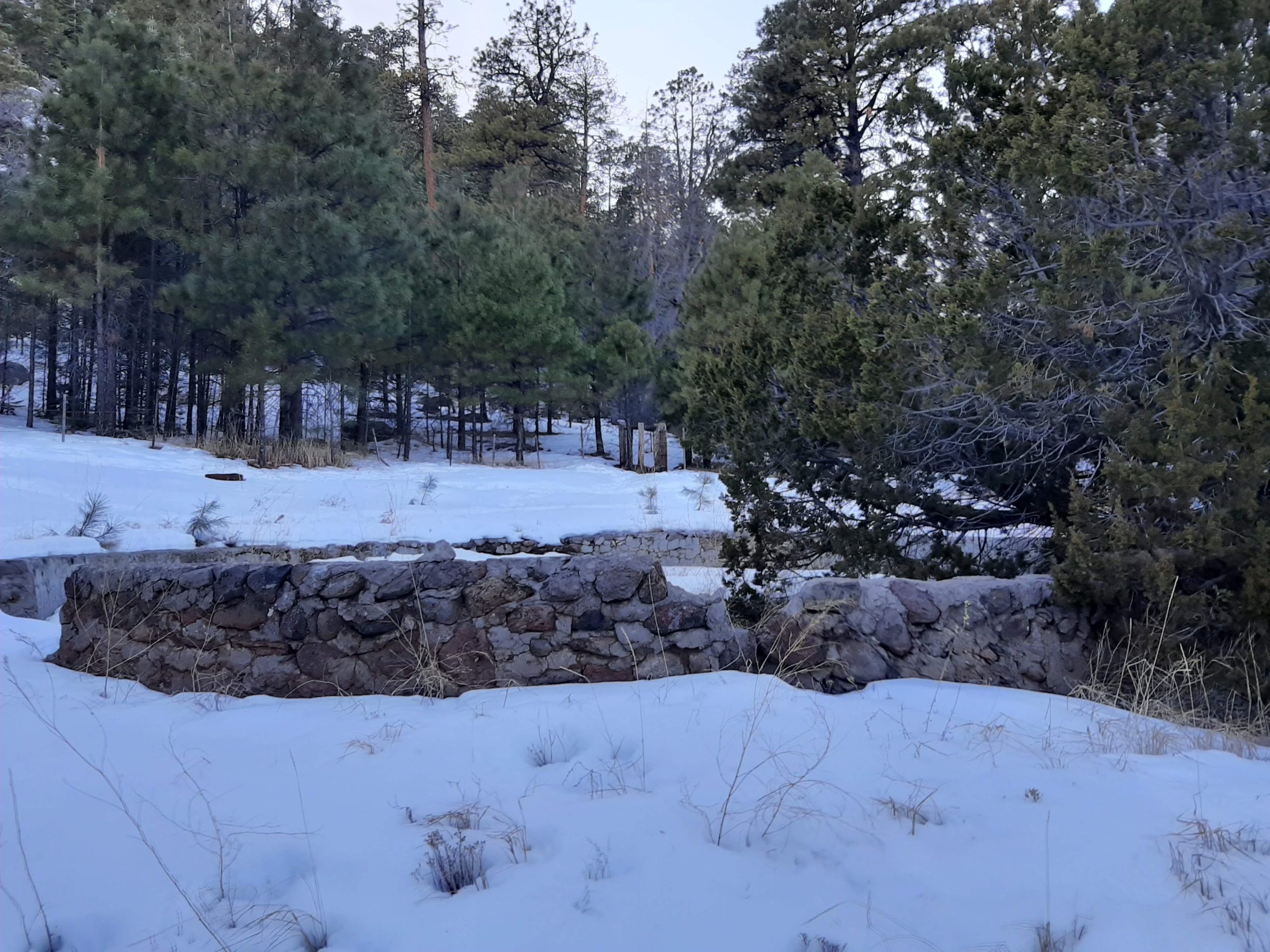 Early evening at Elden Springs. Even in a milder winter, the trail is still covered in snow.

This area’s climate is similar to most of what I’ve covered so far. Mostly dry with relatively mild seasons. I recently found this page, which lists which roads in the Coconino National Forest are currently open. So if, say, there was recently a big snowstorm, you can check on how that might affect your plans without heading all the way out. This is maybe more helpful for remoter sections of the trail, but it does include several along this passage, such as Schultz Pass.

This is one of the gentler sections of trail I’ve encountered so far, so whatever gear you’ve been using will probably work. When I visited, the trail was quite muddy, with occasional patches of ice. I was glad to have worn waterproof hikers, but even standard tennis shoes would have been fine. 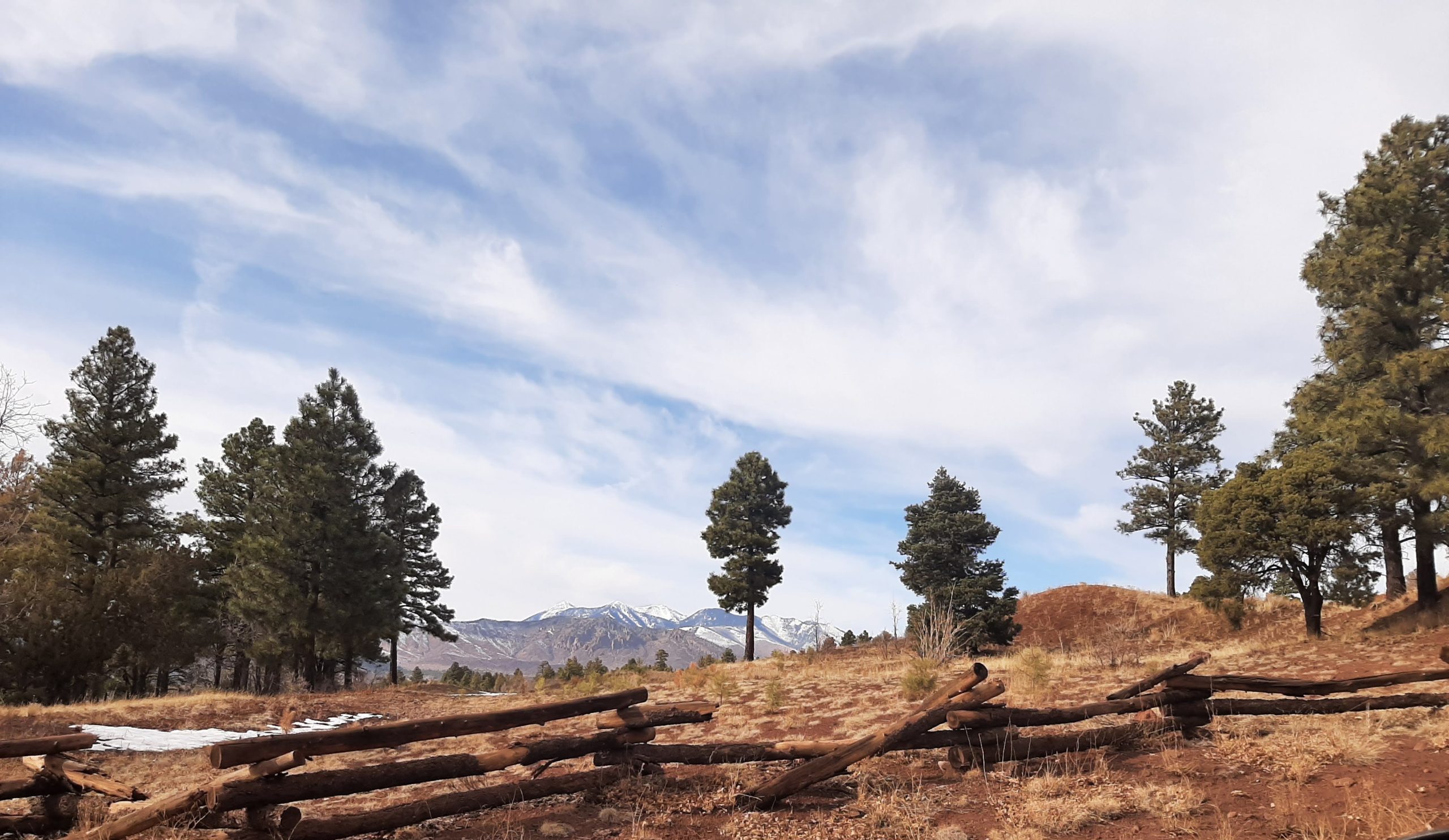 A view of Mount Elden and the San Francisco Peaks from FR 791, a little north of where it crosses the AZT.

Almost all of the area around this trail is explicitly signed as not permitting camping. As remote as it seems, this passage is still pretty close to Flagstaff proper. Little Elden Springs Horse Camp is closest to the trail (.3 miles away), but as the name suggests, it is intended only for equestrians. Heading a few miles north on 89 gets you to the Cinder Hills OHV area and Sunset Crater National Monument, which both have campgrounds. There’s also a KOA nearby. 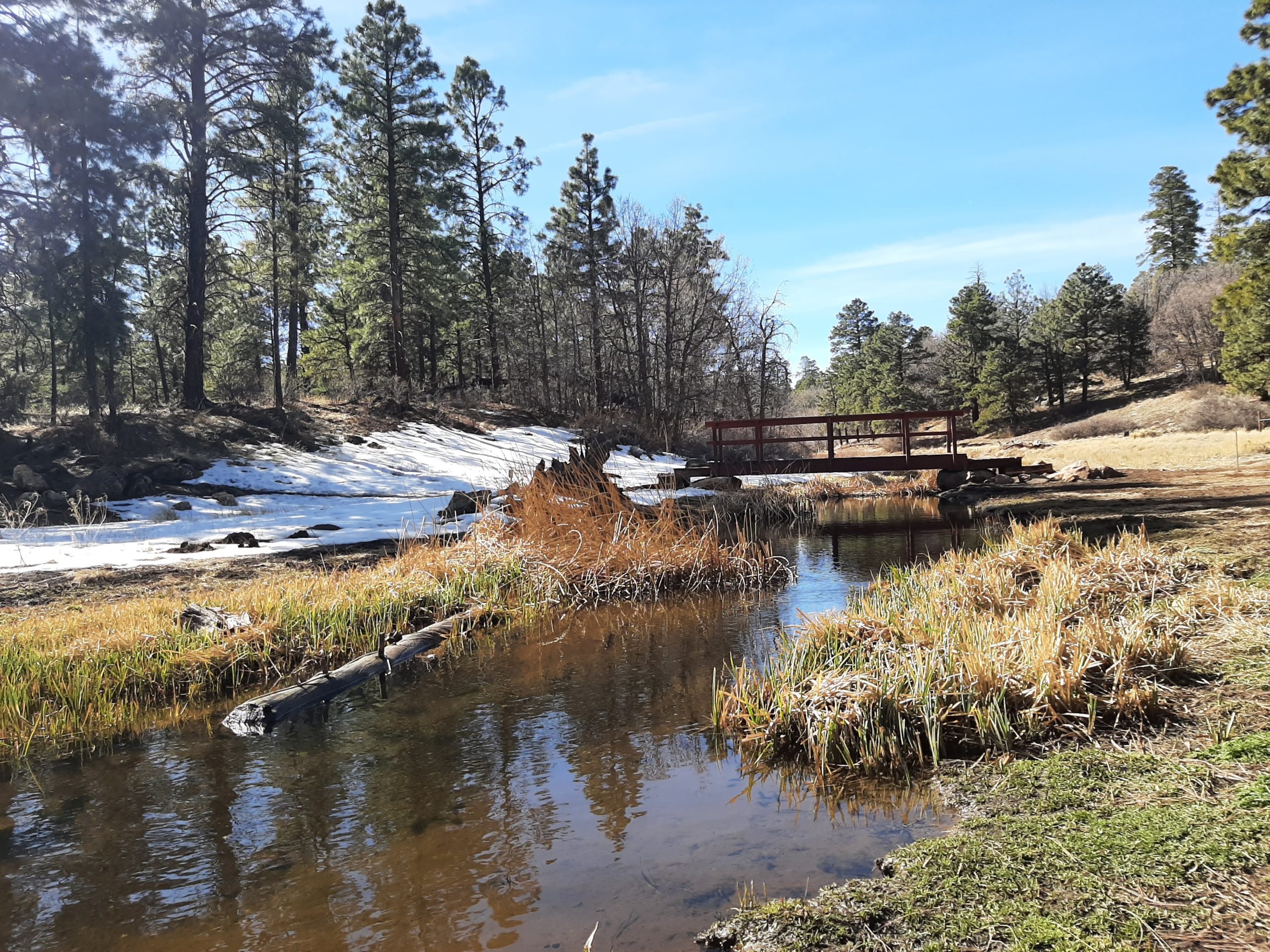 Though you can’t use it as a water source, the Rio de Flag feels very much like a respite from the AZT’s overall dryness.

This section is shorter, and mostly taken up by two larger features. They’re both quite good, though, so I’m not complaining. Before we talk about those, I’d like to quickly mention the variety of trail materials (I guess that’s what it’s called) found along this stretch. There’s the standard red or brown dirt, and this dark gravel that I’m fairly sure is volcanic in origin. There are also a couple of lighter, almost sandy bits, which are always a joy to walk through, even if it’s cold and you have to keep your shoes on. A geologist could tell you more of course. I’m just here to say that it’s exciting and builds momentum and almost certainly says something interesting about the landscape that I don’t know how to read.

Now, let’s talk about those landmarks.

The northern end of this trail takes you around the back of the Dry Lake Hills and the Mountains Elden. You’ll pass Little Elden Mountain most closely, but if you’re interested in seeing more, the AZT is part of a network of trails that go throughout both mountains. They’re volcanic in nature, which explains the unique patterns of rock along especially the south of Mount Elden. Taking almost any of the trails along this system will give you a closer look at these formations. If you have a little extra time, I’d recommend Fatman’s Loop, which was my introduction to the area.

Notable for Northern Sinaguan petroglyphs and other archeological finds, this natural and cultural preserve has a number of side trails and educational exhibits. From the little research I’ve been able to do, the Sinagua lived in the area from roughly 1150-1250 CE and left a number of things in the area around Flagstaff. Further north are Sunset Crater and Wupatki National Monuments. Passage 31 of the AZT takes its name from Walnut Canyon (I’ll almost certainly talk more about this next time). In Picture Canyon, taking a short detour on connecting trails leads to views of petroglyphs and the remains of Northern Sinaguan structures.

Picture Canyon was only recently restored to a natural and cultural site (the site was purchased in 2012). If you have the time, I’d suggest exploring some of the other trails in the preserve. While the AZT travels pretty directly through, it misses many of Picture Canyon’s points of interest.

The preserve’s website links to a number of interesting resources and guides you can use to explore the site. 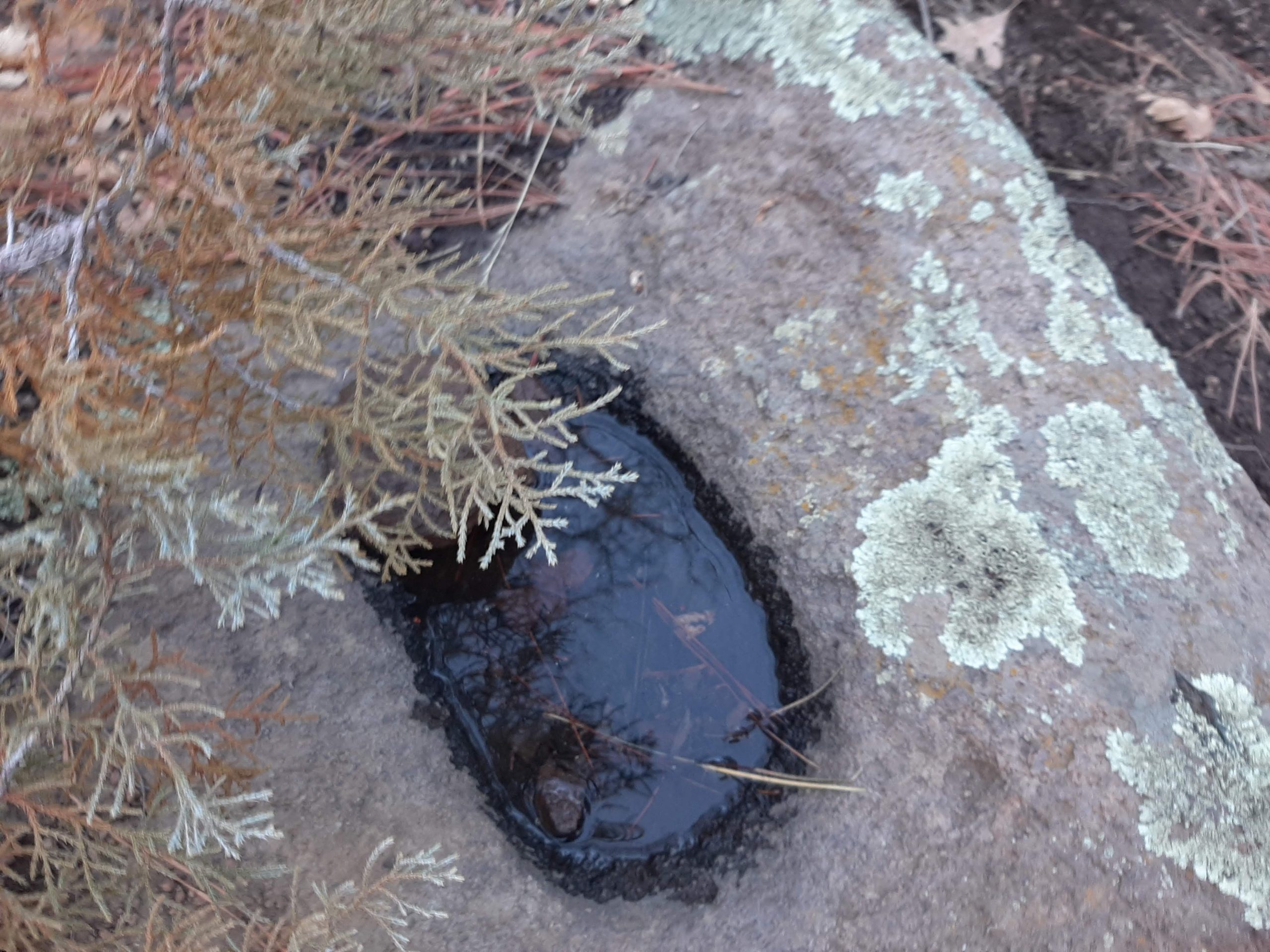 While, depending on the weather, some water can be found along the trail, you’ll probably be better off bringing your own.

There aren’t any reliable water sources since the Rio de Flag is non-potable. However, this section is still near enough to central Flagstaff that getting to a gas station or grocery store would be a reasonable detour.

As mentioned above, this section is still pretty close to some Flagstaff stores. Heading south from the Sandy Seep trailhead is probably the easiest access. I haven’t checked, but there’s probably a trail that runs parallel to Hwy 89. 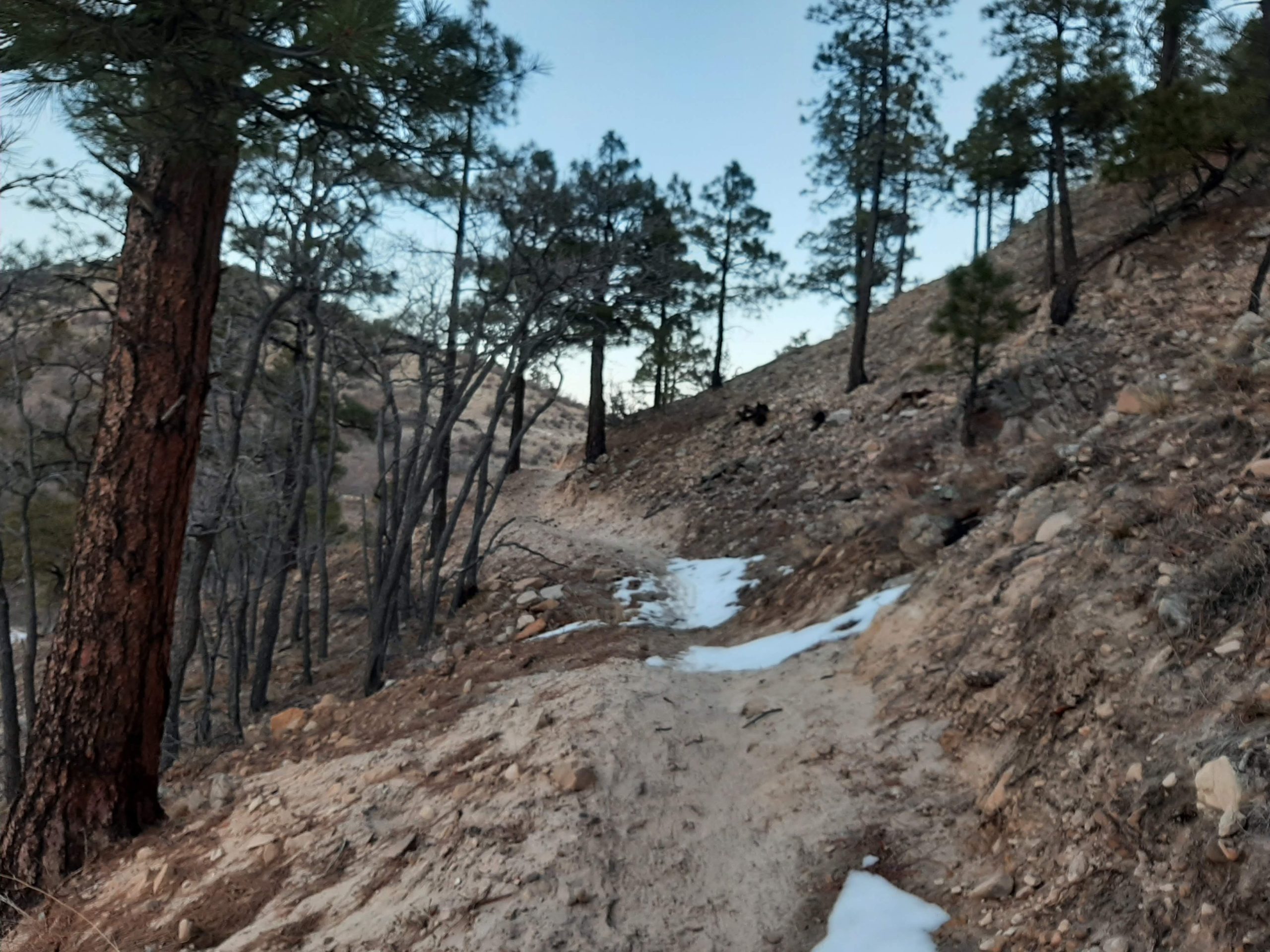 The AZT spends a few miles running along area hillsides as it leaves Little Elden Mountain.

The gentle terrain and clear views of history make this a trail I’m likely to return to. As I mentioned before, it really does feel like I could spend a lot more time here, both learning and exploring. If anything I’ve mentioned sounds interesting, please take the time to look into it more yourself. There are so many little pieces that I couldn’t include. This may make the hiking seem like an afterthought, but it genuinely is also quite good.

Thanks for reading! I’ll be back in two weeks with Passage 31: Walnut Canyon.