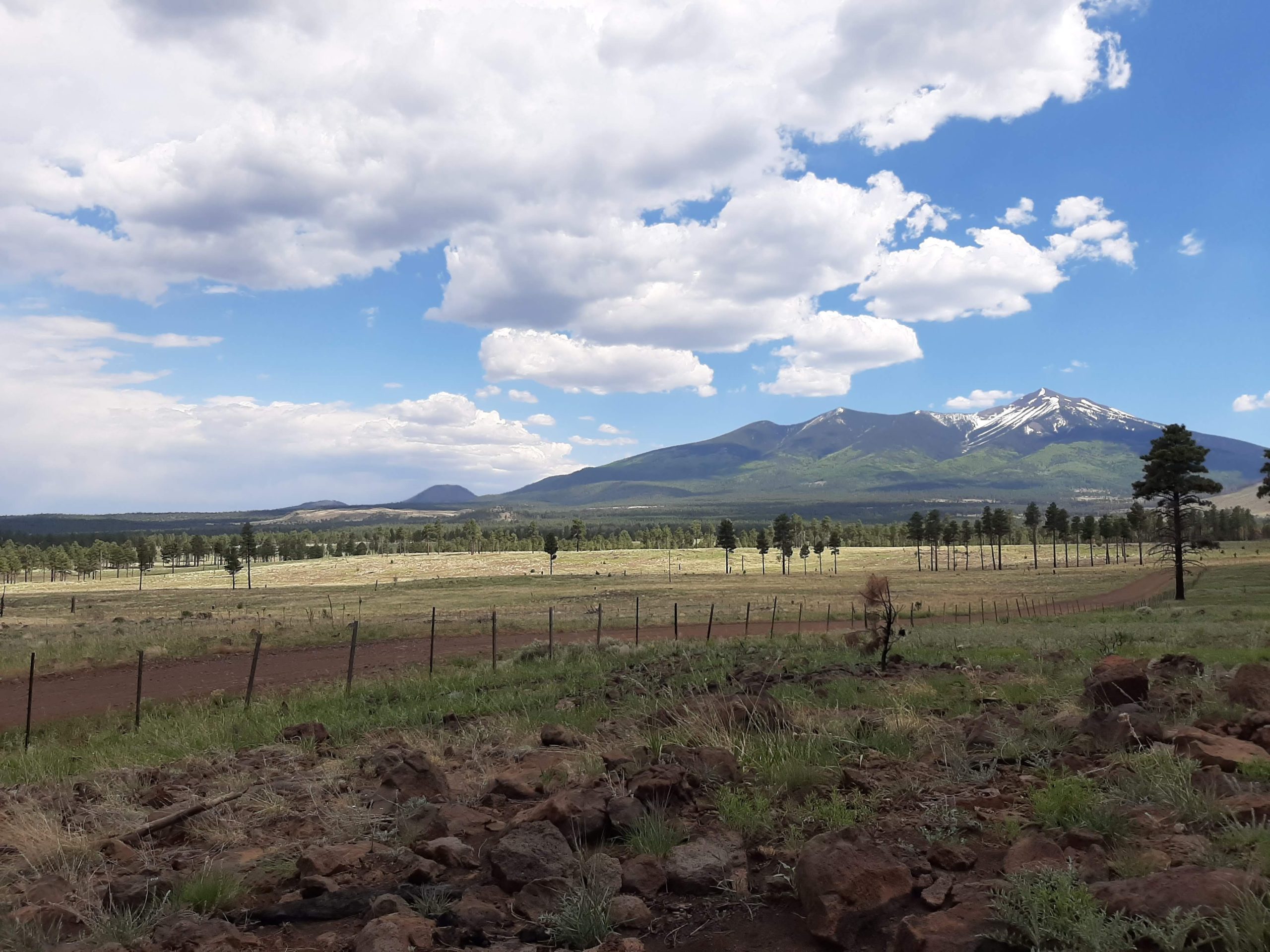 The San Francisco Peaks are a primary feature of this passage. While the AZT itself doesn’t summit any, there are a number of connecting trails that do.

Mountains, aspen groves, even a lake or two. This passage marks the first significant change in elevation I’ve done on this project, and it shows in the landscape. I’ve entered into the second national forest of this hike and a slightly longer passage–this is where it begins to feel like I’m actually making progress. 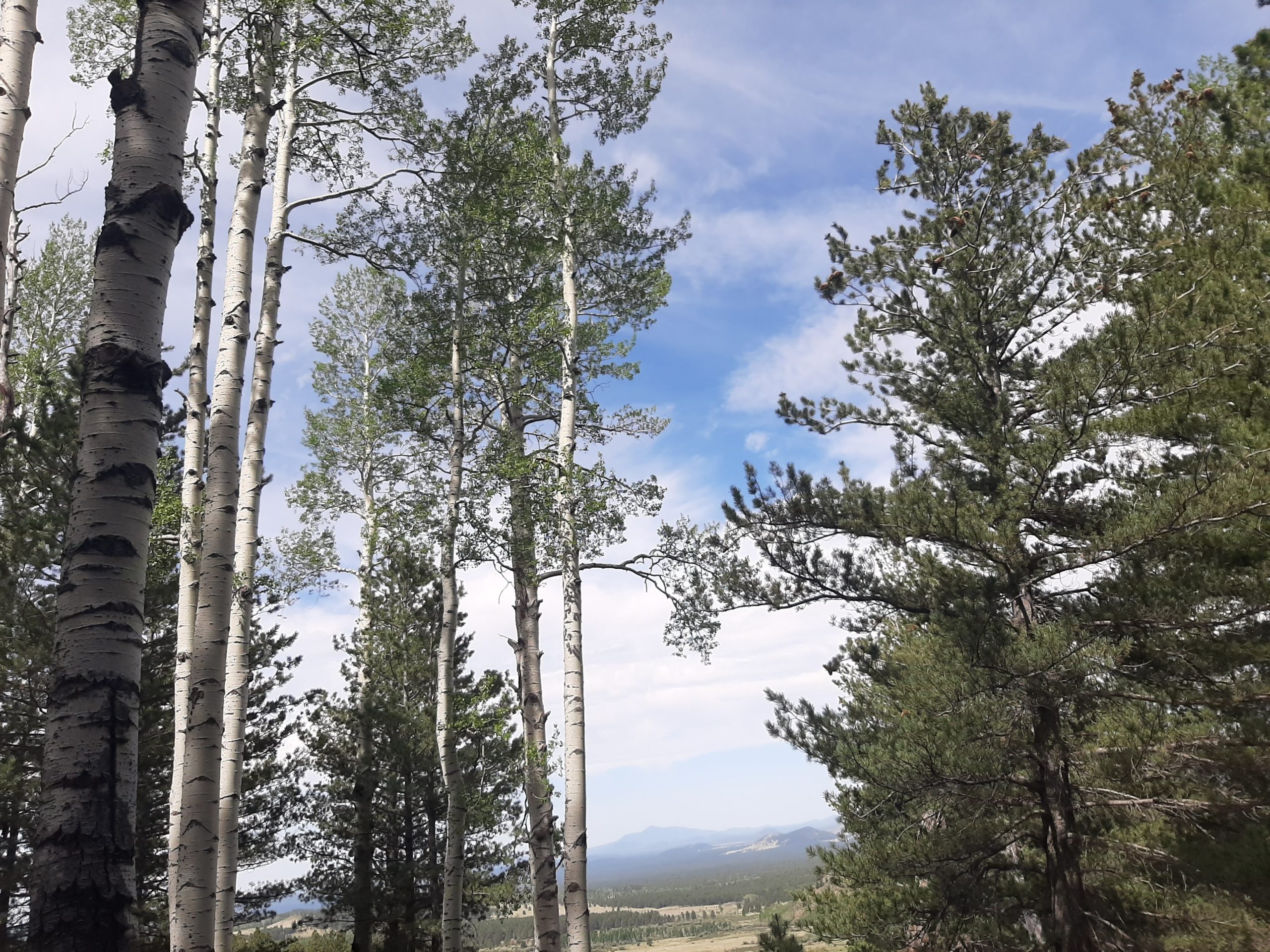 As you move south through this passage, you’ll find a new mix of trees. This is largely due to the slightly higher elevation.

(When I first used this trailhead with a friend, we got incredibly turned around. It was only on reaching the top of a hill and seeing the San Francisco Peaks in the distance that we realized what direction we were heading. Actually, it took until we returned home and got out a map to understand what had happened. It is entirely possible the two of us were just having a bad moment and that the trail’s direction will be apparent. Just in case, though, I wanted to pass it on). 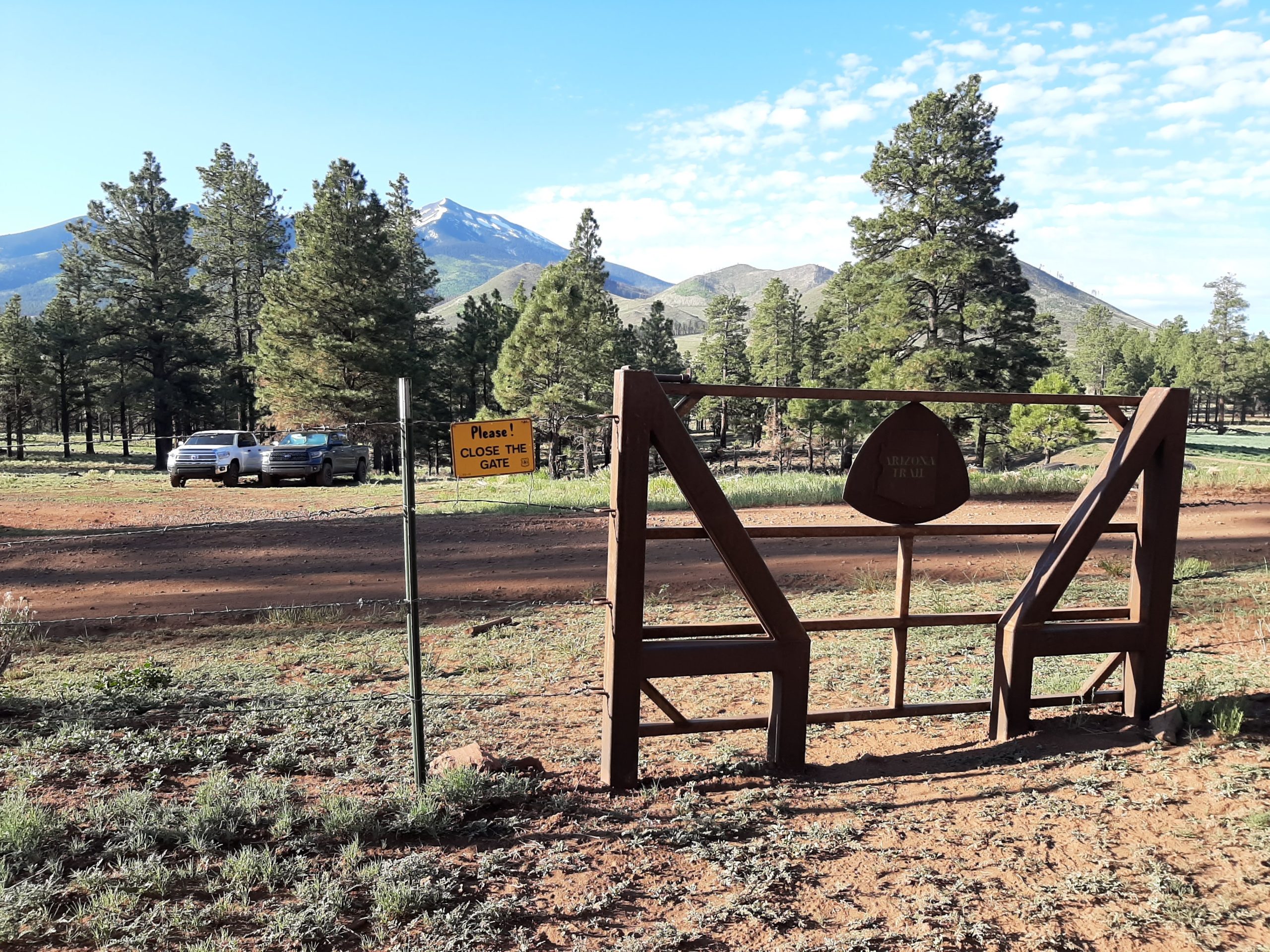 One of many trailheads found along this passage. This is toward the northern end.

To get to the northern trailhead, you’ll want to head south on 180 as it leaves Valle. After about 17 miles, there’s a turnoff to FR 417 (if you pass the Red Mountain Trailhead, you’ve gone too far). Follow that road for a little over 5 miles, and you’ll come to a pullout with a large metal sign.

There are a number of forest roads between this point and Flagstaff that will get you to the trail, but for the sake of time, I’ll let you figure those out for yourself. (Feel free to ask, though, if you’re looking for something specific).

To access the southernmost trailhead for this section, you’ll need to go to Schultz Pass road (also known as FR 420) in Flagstaff. Less than a mile in, the pavement ends and the road starts to move gradually uphill. Follow it for about miles until you reach the Weatherford trailhead. As far as I know, the road is passable, but there was a bit of snow when I was last there, so I didn’t go all the way up.

Maps are also available on the Arizona Trail Association’s website.

You can hike this passage either N-S or S-N. There are benefits to both–I’m a fan of saving the best (in this case, most dramatic is probably closer) for last, so I prefer to start at the northern end. Most of these access points close in the winter, though, so I ended up moving north instead (this is also the reason I skipped 35 if you were wondering. I’ll loop back around in the spring). Also, if you’re coming from Flagstaff, the southern starting point will be much closer. 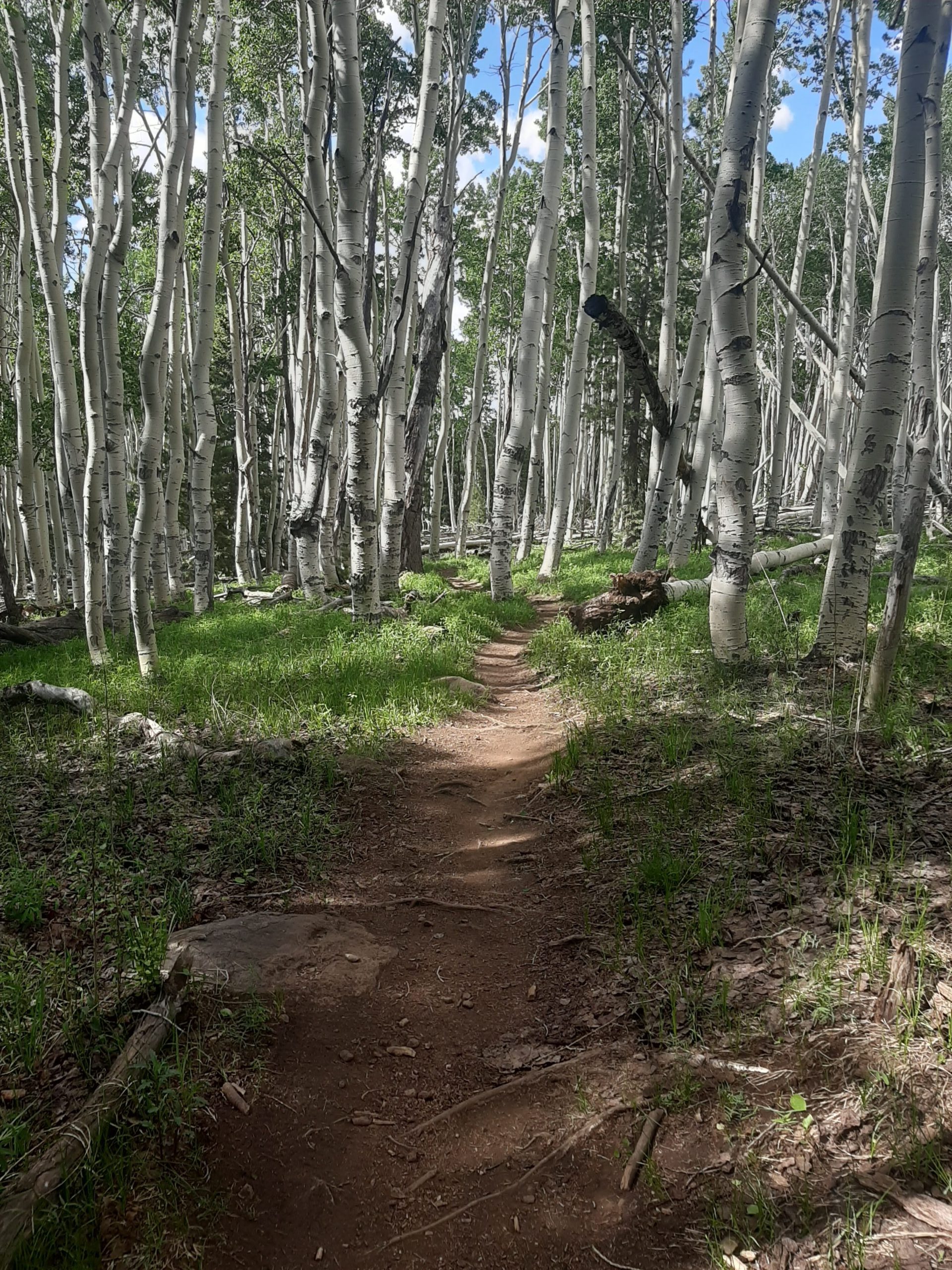 The entrance to an aspen grove, as seen in the spring. These are my favorite part of this passage.

Why Hike this Trail?

Apart from the gradual change in landscape present throughout the AZT, I think what excites me about this section is how clearly you can feel your movement. As I headed south, I watched the San Francisco Peaks appear in the distance and then gradually come closer. A day later, the trail was running along the side of their base. By the end, the mountains had begun to recede into the distance and I was feeling pretty proud of myself.

This section was also the one to introduce me to aspen groves, at least as more than a vague concept. And, friends, those little ecosystems are just so neat. I’ll talk about it more later, but they are otherworldly and beautiful and every time I look into their biology I find a new reason to be impressed.

Which is to say, you’ll pass some mountains and some truly astonishing little environments and by the end you’ll have a sense of accomplishment (or at least I did). I think that’s worth at least a look. 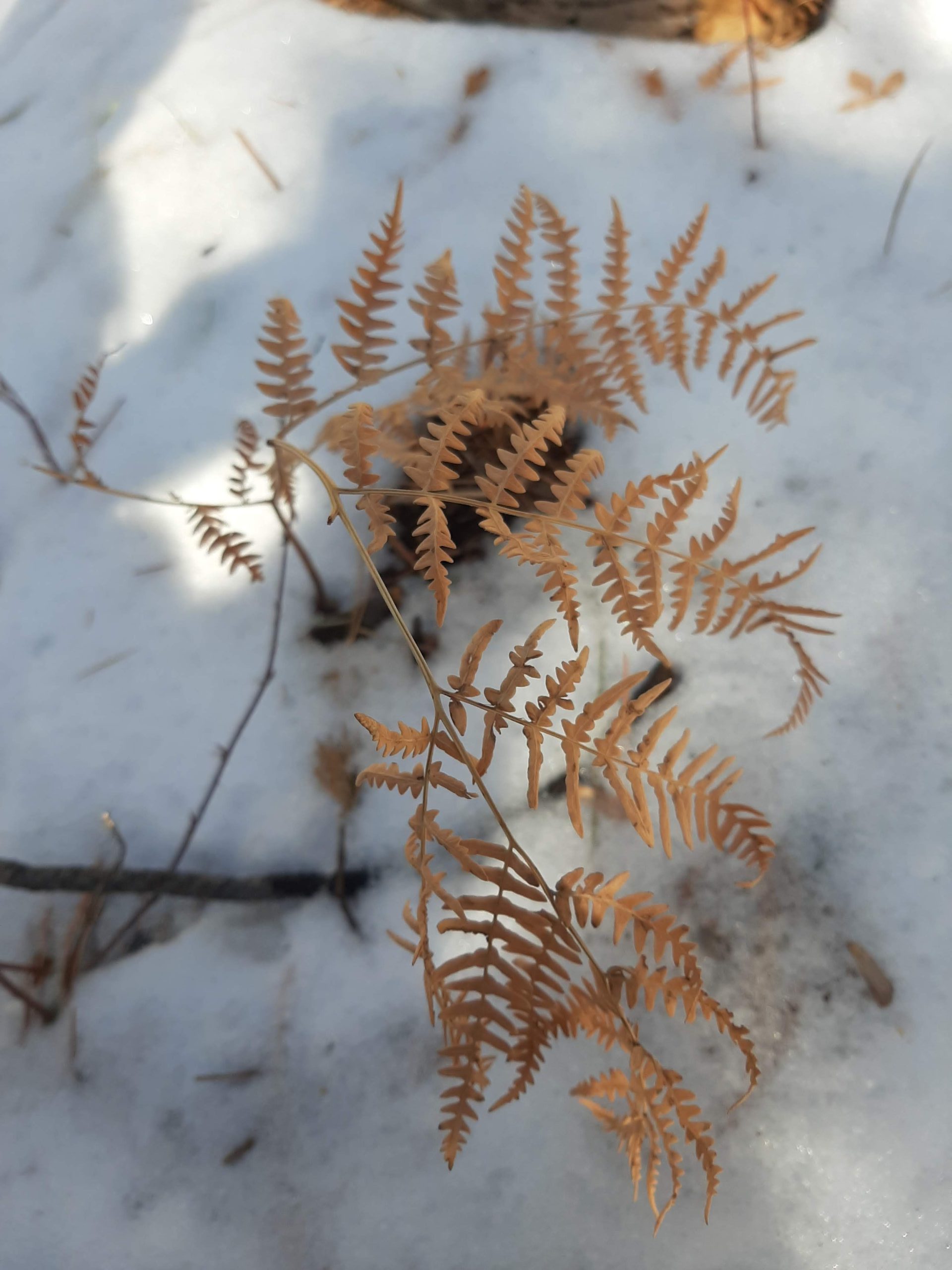 Ferns are still present, even in the off-season.

The standards for northern Arizona still apply here (four seasons, low humidity), but a slightly higher elevation means more snow. This has not been as much as much of a problem this winter, as thankfully the weather has been unusually warm. But it’s something to be aware of if you’re planning an off-season hike.

There are some hills here and rough terrain. It’s not enough to need any special equipment, but I appreciated bringing along my trekking pole more than usual. I just have the one and it’s mostly there for moral support but it was nice to have something to lean on for the mountainside bits.

Camping is a little more restricted here, especially as you get closer to Flagstaff. Pay attention to signs, but generally rules are the same as in Kaibab National Forest. Up to 14 days per month, use a designated pullout/campsite. You can find more information at Coconino National Forest’s website. 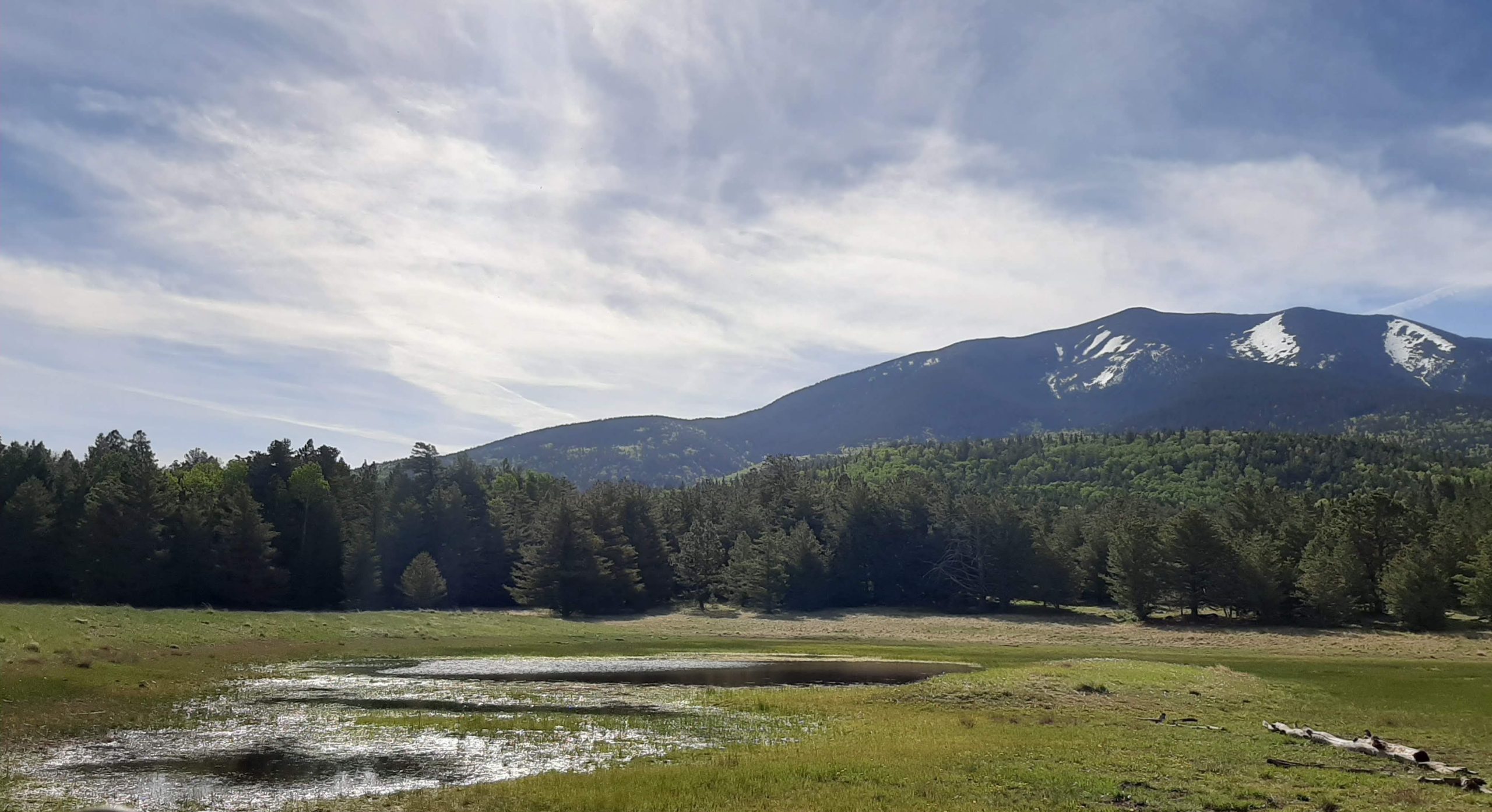 This part of the trail is at a slightly higher elevation (closer to 8000 feet than 7000), so we get some new vegetation. The terrain is rocky, there are a lot of hill- and mountain-side stretches of trail and an unprecedented amount of mountain bikers. As you approach Flag, you will find many more people out on the trail, especially in nice weather. When thru-hiking, I imagine this signals a sort of a break.

Landmarks are listed from north to south.

You don’t go up this on the AZT, just quite near its base, but as a Missourian myself I feel obligated to mention this landmark. Also, it rhymes in a way I find delightful (a similarly named feature in Williams is called Bill Williams Mountain, Billiams for short. This is not relevant, except to say that some folks are exceptionally good at naming things and I am grateful.) I haven’t been able to find much on the person it was named for, but as far as hills go, I quite enjoy it.

This is, for me, a big selling point of this section. I’d known about aspens prior to this, but coming across a stand of them all together, that filtered green light and cushion of oversized ferns at my feet was another thing entirely. I’m almost reluctant to tell you about it, it was such a wonderful surprise (also when I first visited in the spring, there were wild irises and other small flowers, which added to the atmosphere). I didn’t manage to visit in the fall, but I know aspen leaves turn yellow right before they drop. That’s probably also splendid. Hopefully I’m not being too flowery, it’s just that coming across this was so very exciting.

By this point, I’d been using these mountains to mark my progress for quite some time. And this section allowed me to finally pass them. This feels like an accomplishment, even just section-hiking. The San Francisco Peaks also include Mt. Humphreys, the peak of which is Arizona’s highest point (12,633 feet). A side path from the Arizona trail near Hart Prairie leads about 5 miles to the top. I didn’t have time to go up on this trip, but it’s high on my to-do list.

This is another of those bodies of water that are only occasionally there. When I passed it, it was almost completely dry, but that may have been unusual. At any rate, Lake Bismarck is on a border between forest and field. It’s a great place to rest mid-hike, or to use as a starting point.

There’s a whole network of trails in and around Flagstaff and the San Francisco Peaks. If you have any extra time, I’d recommend exploring them. Coconino National Forest gives a good starting point with their Passage 34 intro page. 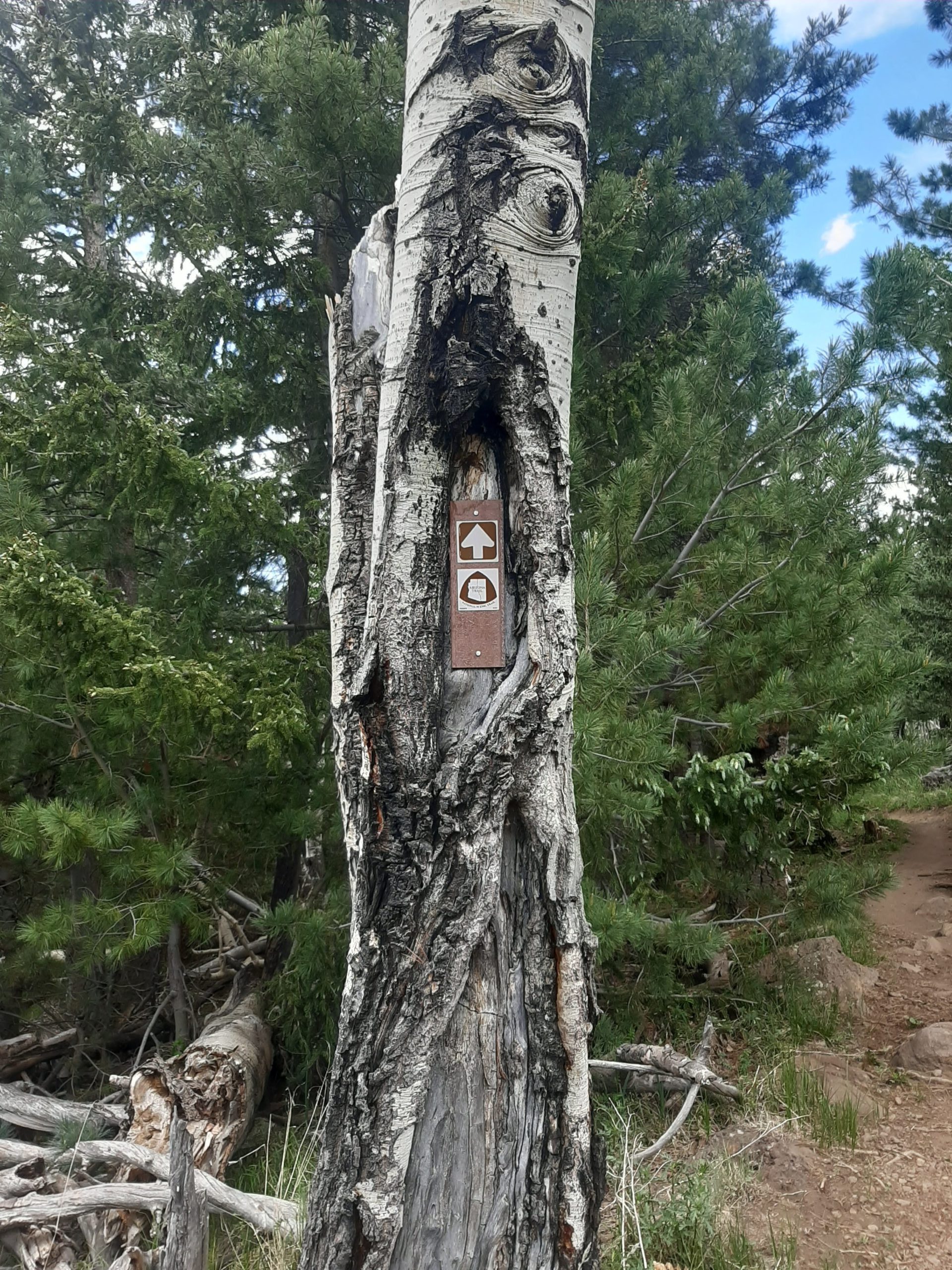 Speaking of aspens (which we only sort of were), I enjoyed this section’s creative signage.

There are caches at a couple of points along this passage. Look for the large brown metal boxes. Thru-hikers also cache various supplies inside, so please be respectful if you’re going to use them. Guidelines are usually listed inside.  There are also a few small bodies of water near the southern end, but Lake Bismarck is pretty typical. I try not to rely on them so much as they’re fairly weather-dependent, but it might be good to bring along a filter just in case.

It’s not in this section, but if you keep heading south from Schultz Pass, you’ll reach Flagstaff in under ten miles. Follow the signs for the Flagstaff Urban Route. 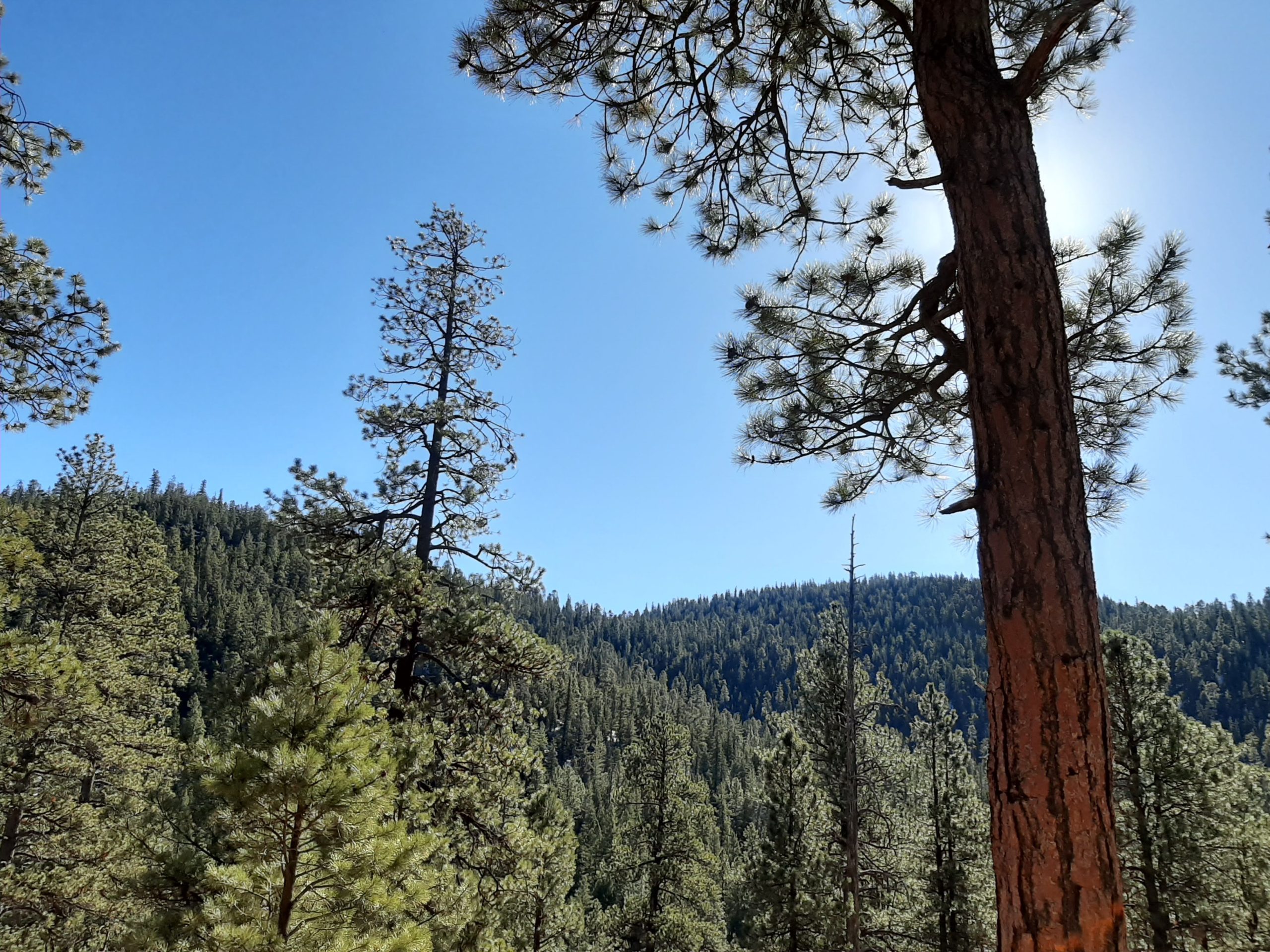 The view towards Flagstaff near the end of this passage. The city is actually much closer than it seems from this.

I’m not sure, why, exactly, but this section really surprised me. Part of it’s the proximity to Flag, part my inexperience with mountains, but it wasn’t what I had expected. That’s not to say it was bad though–I found it pleasantly challenging and again some really good views.

Thanks again for reading! In two weeks, I’ll be covering Passage 33: Flagstaff.