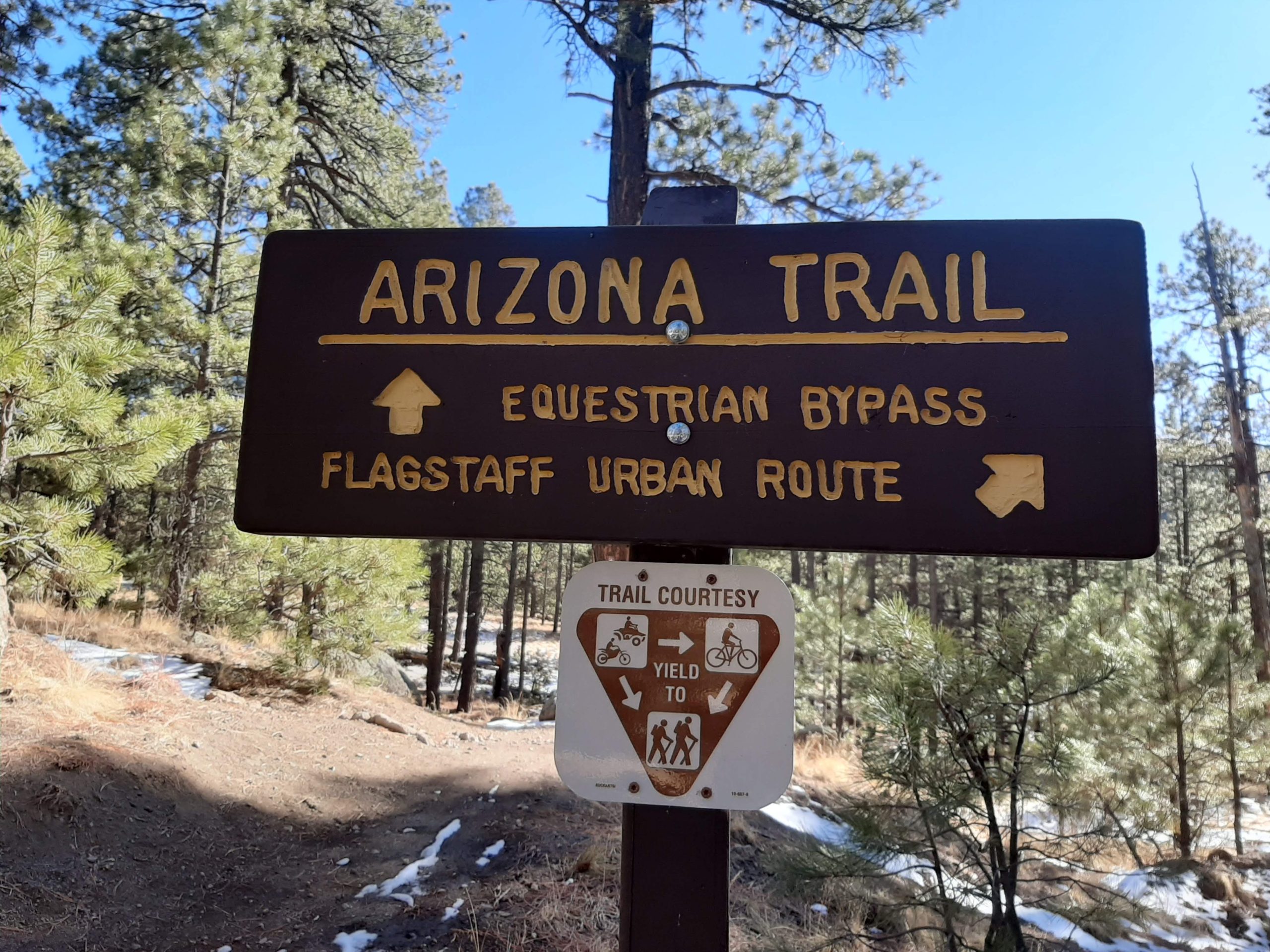 A sign along the Arizona Trail directing south-bound hikers to Passages 32 and 33. Passage 33, a resupply route, isn’t included in the total trail mileage.

Just above Schultz Pass Road, the Arizona Trail (AZT) splits in two. Hikers have a choice to either go through the city of Flagstaff or around the back of the Dry Lake Hills and Elden Mountain, more directly continuing south. Since this is a section hike, I can loop around and do both. Why not start with Flagstaff?

When I first moved to Arizona, driving a beat-up little car halfway across the country, it was passing through Flagstaff that reinforced for me that maybe what I was doing wasn’t a mistake. I passed a number of brown signs (always a good sign) as the interstate ran over forested hills, shadowed by mountains not too far in the distance. It was definitely still a city, but it didn’t feel like it took up so much space. For the most part, it stayed in this little pocket between patches of forest. The parts of it that strayed were hidden behind hills or just not visible from where I was. I still love this place, and I think Passage 33 does a fairly good job of showing that charm. Even if it is just a resupply detour. 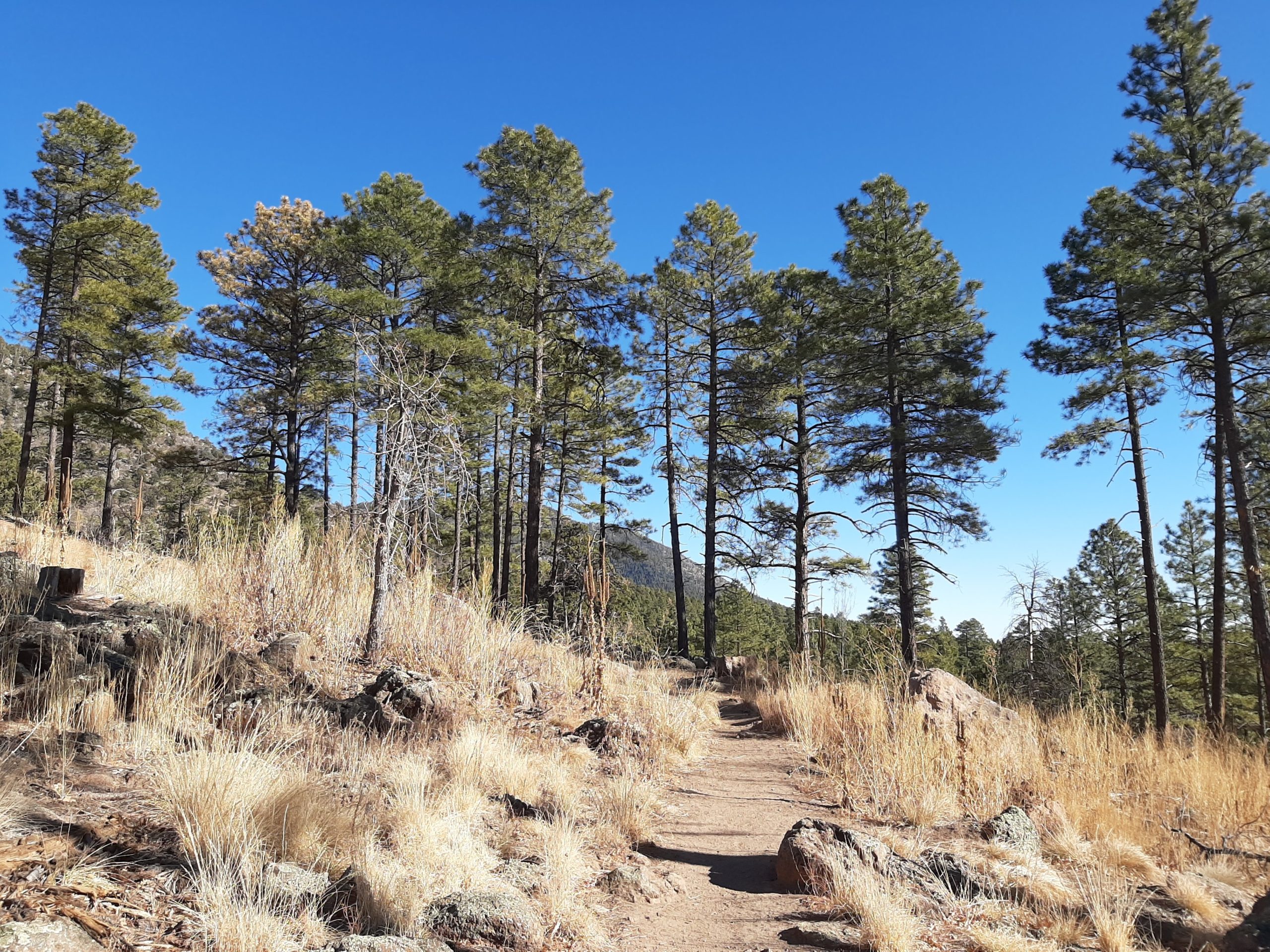 A stretch of trail along the Dry Lake Hills just after leaving Schultz Pass Road. 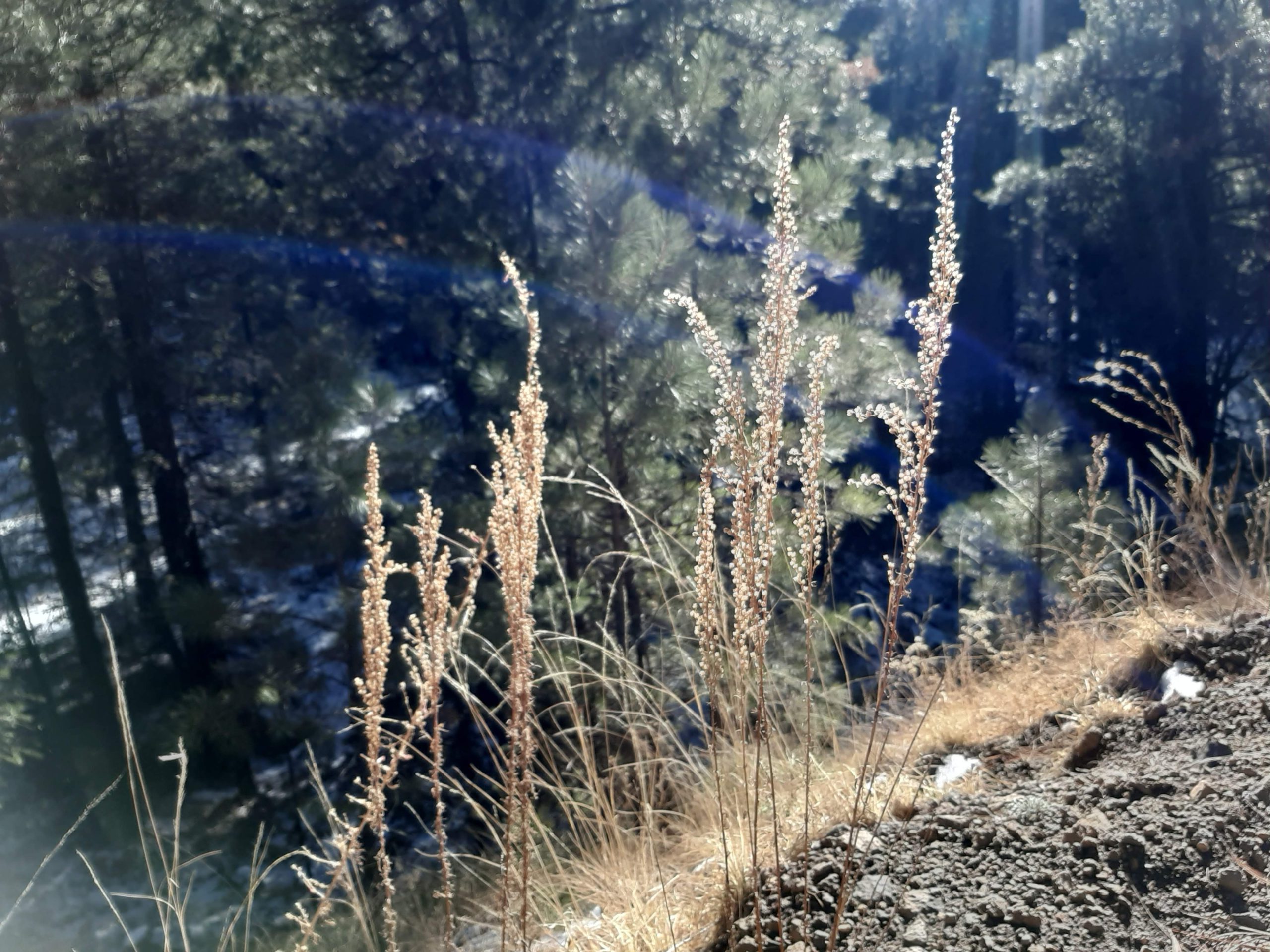 Just some nice grasses I found along Schultz Pass Road. The AZT actually runs through the valley in the background.

The northern end of Passage 33 is off Schultz Pass road (also known as FR 420) in Flagstaff. Less than a mile after the turnoff from Fort Valley Road, the pavement ends and the road starts to move gradually uphill. Follow it for about miles until you reach the Weatherford trailhead, and then head south, following the signs for the Urban Route. The trail (though much lower) follows the road for the first few miles of this passage. There are also a few parking lots nearer the start of Schultz Pass, which also allow access to this passage.

The passage officially ends at Fisher Point, which is not accessible by car. You’ll need to park at the campground off Lake Mary Road and hike in using a connecting trail. This is about four miles, according to the ATA site, but it connects a little closer to where the trail heads south on Section 31. Depending on your plans, it might help to end there instead. (I did this, so when I work on 31 I won’t have to backtrack quite as much. Not sure how helpful that trick is to other approaches).

N-S or S-N are both options, and for this part maybe most of all, it really doesn’t matter except as part of a longer hike. The trail is relatively short and low difficulty, and can be accessed from a number of points along its length. 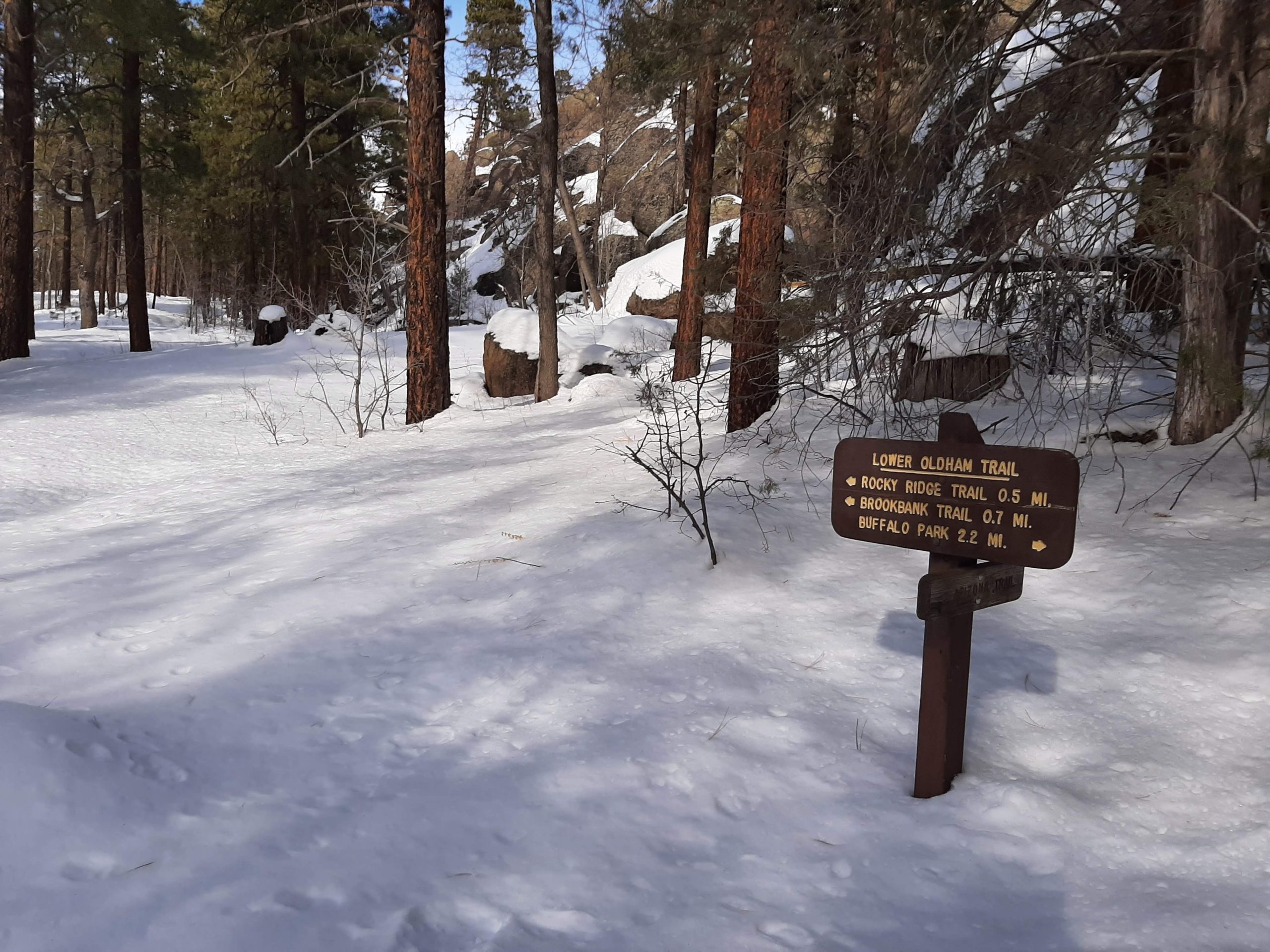 We had a big snowstorm at the start of last week and I had to go see what things looked like on the trail. It’s hard to believe how close this is to Flagstaff proper.

I think the most common reason is also the most obvious: to stock up on supplies during a longer trip. Flag is, to me, though, a lovely place that is worth seeing. And the trail itself has some great moments.

As with all of the passages so far, you’ll be dealing with four seasons. I’m from the Midwest, so have found both summer and winter to be relatively mild (the low humidity definitely helps). The temperature definitely changes though, and we get a few big storms throughout the year.

This section doesn’t call for a lot of specialized clothing. As I mentioned above, Northern Arizona does have four seasons, but that’s probably all you’ll need to keep in mind.

If you’re going to camp, it’ll probably be at the far ends of this section. Camping’s not allowed within Flagstaff city limits. There are a number of hotels, however. And the passage ends fairly close to the Canyon Vista Campground off Lake Mary Road. 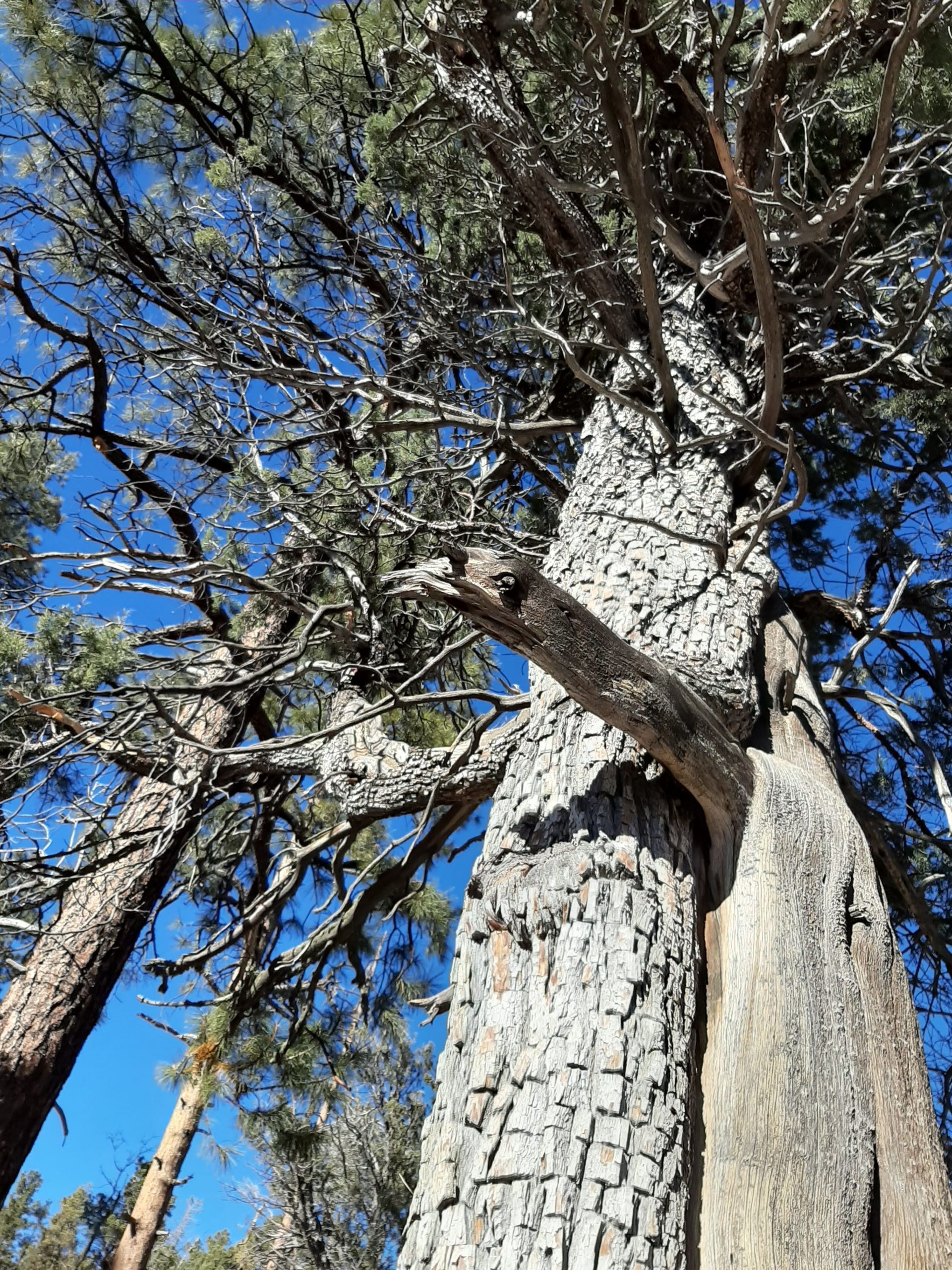 An alligator juniper, seen toward the northern end of this passage. The name comes from its distinctive scale-patterned bark.

Since the AZT so rarely moves through populated areas, I thought I’d spend a little time looking into the city’s history. Obviously, there’s much more I couldn’t get to. The area around Flagstaff was a common resting place for people making their way west (usually to California). Due to its remote location, however, few stayed long term until first a small group of sheep ranchers set up in 1876, and the railroad came through town four years later. From there the town grew and changed to the one the trail passes through today. (If you want to learn more, the city’s website is a good place to start).

Flagstaff’s name actually comes from some of those first people who didn’t stay. To celebrate the US’s 100th year on July 4 1876, a group camping below the San Francisco Peaks removed the bark and branches from a pine and hung an American flag from its tip. They left shortly thereafter, but the flag-staff tree remained, and was used as a landmark by later travellers.

The only thing I’ll say about plants here is that as you move around the Dry Lake Hills after leaving Schultz Pass, you’ll start to see some alligator juniper. Found on rocky hillsides at 4500-8000 feet of elevation, this tree is known for having scale-patterned bark. It’s texture is actually quite different from other juniper varieties I’ve seen. While those have smoother bark that layers in long horizontal striping, this is rough and checkered into pale thick squares. It almost has the same consistency (in terms of feel, not appearance) as pinon bark.

The first bit of trail on this passage that actually begins to feel like a city is Buffalo Park. You emerge from the hillside stretch onto this open field crisscrossed by all sorts of trails. As you follow the trail along the edge of the park, you’ll pass a memorial for Dale Shewalter, the AZT’s founder, and a large statue of a buffalo at the park’s entrance. And, perhaps, most importantly, there is a drinking fountain and public restroom.

Flagstaff has developed an extensive system of trails that go through and around the city. This being northern Arizona, many of these trails are unexpectedly scenic. If you have a little extra time, I’d recommend checking them out. Here’s their website. 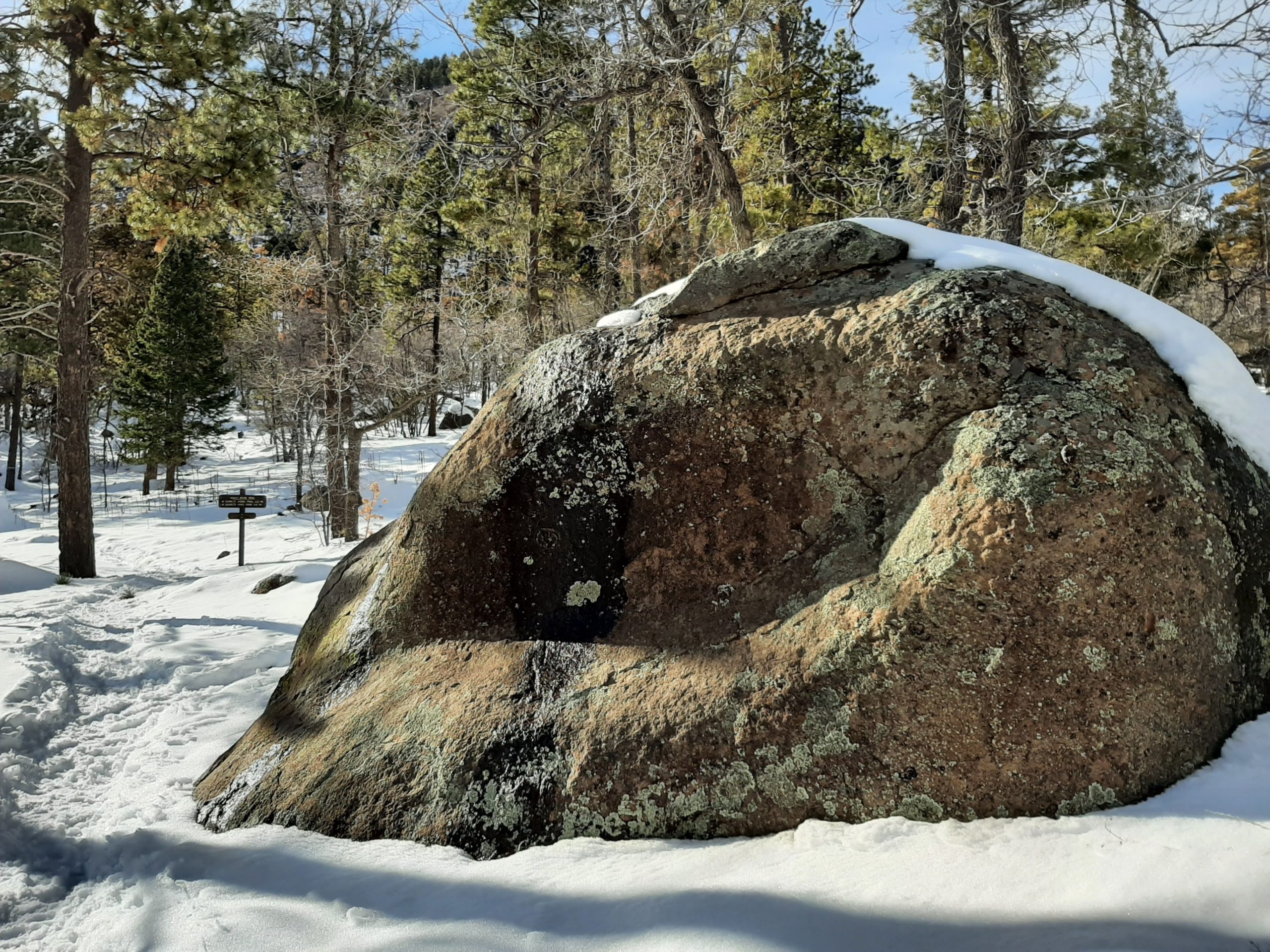 There are plenty of places to buy water and supplies as you pass through the city of Flagstaff. This big rock is not one of them.

You can stop at various places and purchase water in Flagstaff. There is also a drinking fountain at Buffalo Park (water is only on in the summer).

Resupply is the entire point of this section. You’ll pass a variety of stores, restaurants, and other businesses along the way. For anything gear related, I’d recommend Peace Surplus off Historic Rte 66.

Since I’m writing this in January of 2021, I should note that Flag is in Stage 2 of its Coronavirus Reentry Plan. Masks are required to enter most businesses and indoor dining, while up to individual locations, is mostly shut down. More details are available on the city’s website. 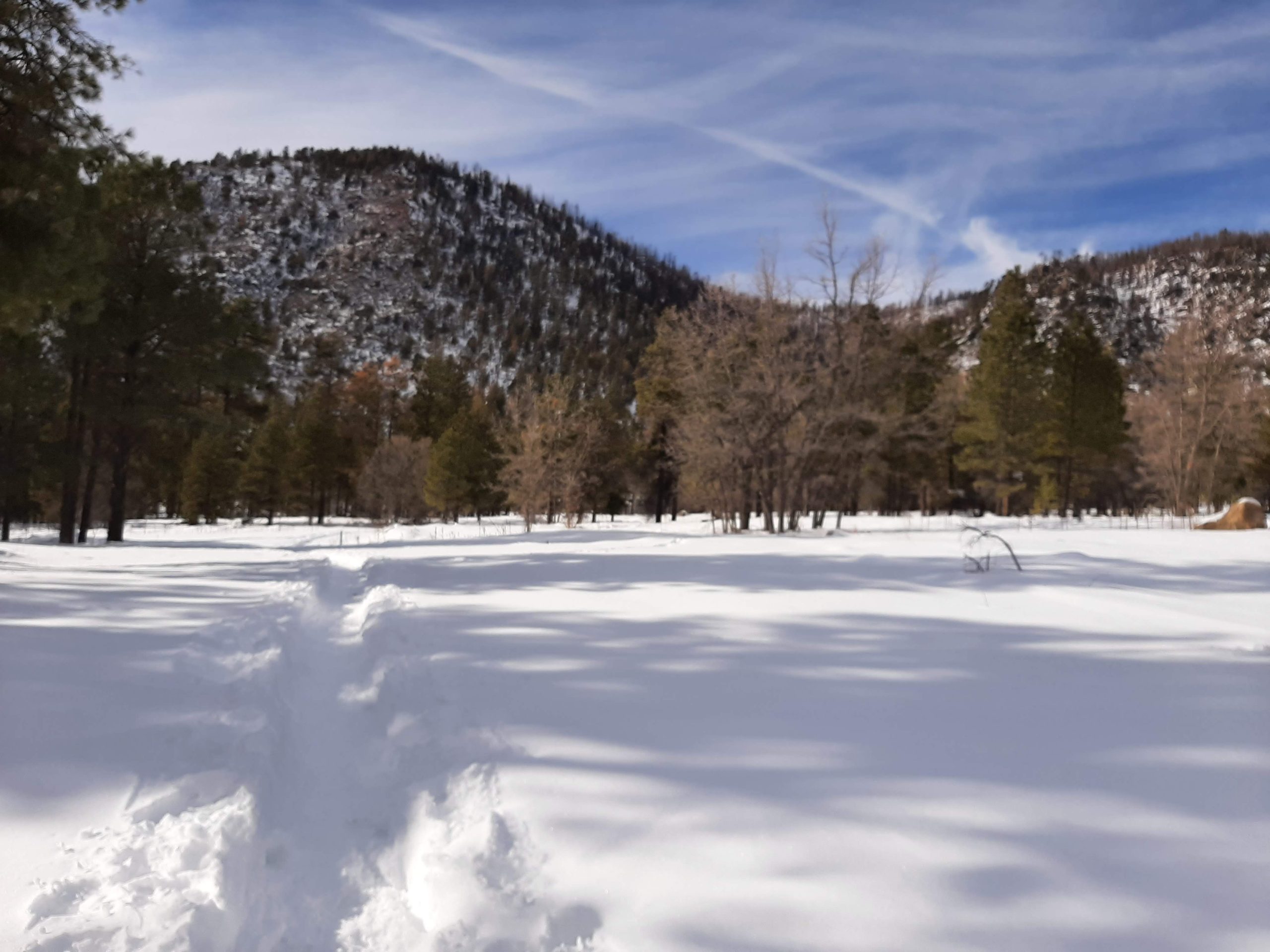 A view of the Dry Lake Hills from just north of Buffalo Park. It’s not pictured here, but to the right is Mount Elden.

A resupply route is probably not what you think of when you’re planning to hike the AZT. Despite running almost entirely through an urban area, this passage still feels like a trail. It makes for a nice day outdoors, especially if you happen to live in the area. It wouldn’t be the first thing I’d recommend to someone who’s only looking to do a small part of the trail, but it’s enjoyable all the same. (And so easy to access compared to the last few sections).

Thanks for taking the time to read this! Hopefully there’s less snow where you are. I’ll be back in two weeks with Passage 32: Elden Mountain.