Back on the Horse (Bonus Day!)

Yes, I thought I was done. I thought this summer’s journey on the Vancouver Island Trail was over. I thought I would just have to leave the few kilometers I didn’t have a chance to see for another season. I gave it up, and resigned to the idea that the story of my trip was to end with my bail.

But… when volunteers from the trail association (VITA) reached out to me, offering if I’d like to go back and hike this one remaining stretch with them, how could I have said no?

And so, I pulled out my gear one more time and packed my day pack. Though I was excited to see Mt Beadnell and Lupin Mountain and crazy views of the Van Isle Ranges once again, I was a little nervous to return to the place where I got bucked off trail. At least I was going to have company – and the company of the people that actually built the trail through the area, no less!

It was Terry (Director of Operations of the VITA), and Steve (Mid-Island Director) who joined me for my last 18kms. But first, how to even get to that remote section of trail, up in the mountains in the interior of the island? First, a 3hr ride from where I live in Victoria up island to Courtenay, with my mom as she returned home from visiting my sisters and I (and grandma!) in the city. Then, the next morning, meeting with Terry, and arriving at a lot where Steve and David (Director at Large) were waiting. We then jumped into their cars for the 1h30 drive up the highway and down some dirt roads to the northern end of the trail section to drop Steve’s car. Finally, we all piled into David’s truck to cut south across the steep cutblocks towards our start point, winding below the ridge we were about to mount. My nerves peaked as I peered out the window at the steepness falling away to Buttle Lake directly below us.

David dropped us off at the end of the road, and we began our bushwack up to the trail in the coolness of the morning. Following Terry’s GPS waypoints, we jumped over logs, crossed a creek, and climbed under the shadows of cliffs, seeking the orange flashers of the trail proper. We connected with the trail only a few hundred meters from where I lost the route. 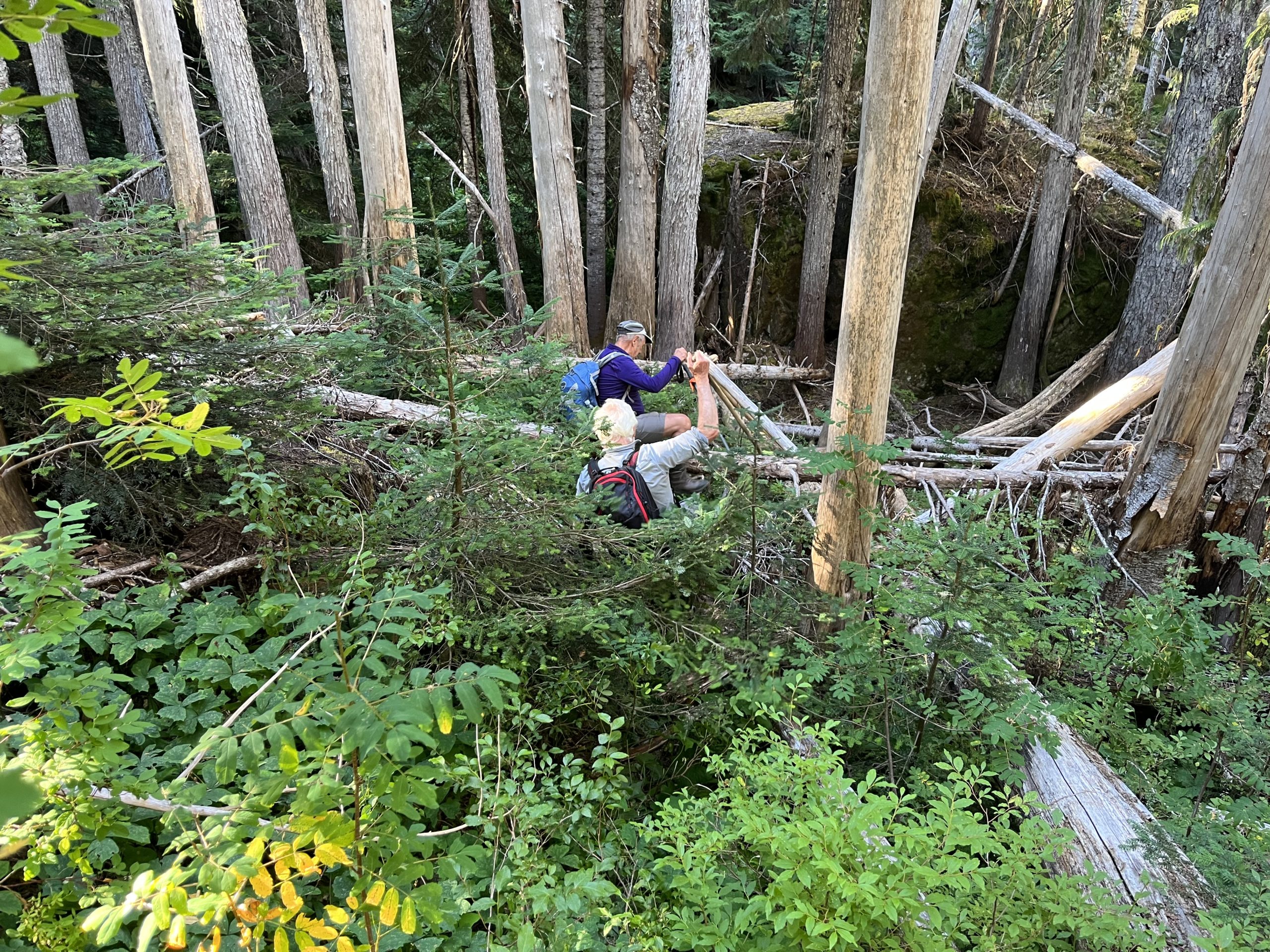 It was really nice to navigate the tricky terrain with people who knew the area well. The cliffs felt less ominous and the rockfalls less precarious when I trusted my travel mates to know the safe way through. 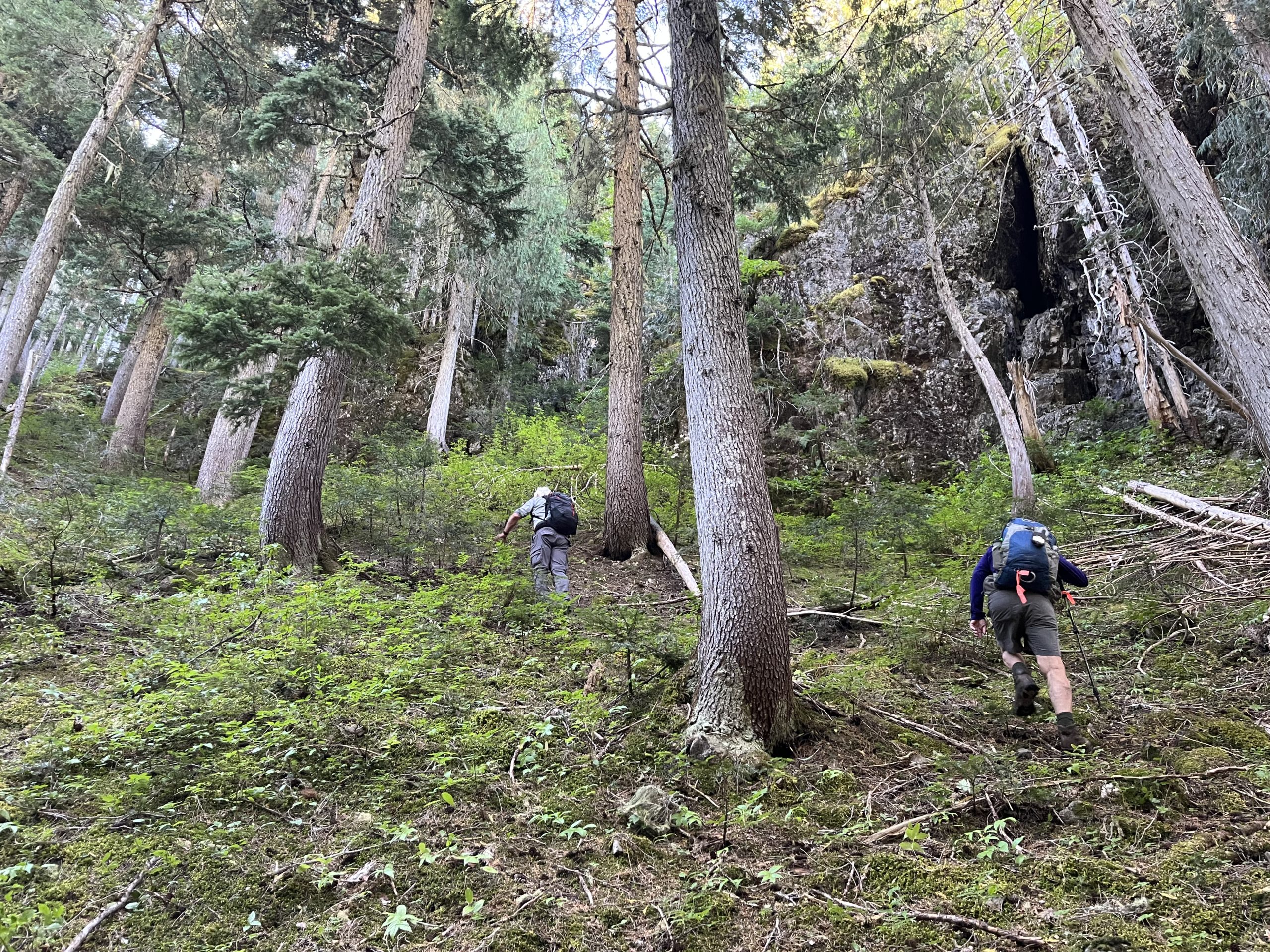 up and around the cliffs!

As we climbed, the band of cliffs to our right grew and grew, until they towered tens of meters high over the scree slopes below. This was why the trail had to dive steeply down the east side of the ridge and then back up again to get around the hazard – it was definitely not hiker-friendly territory. 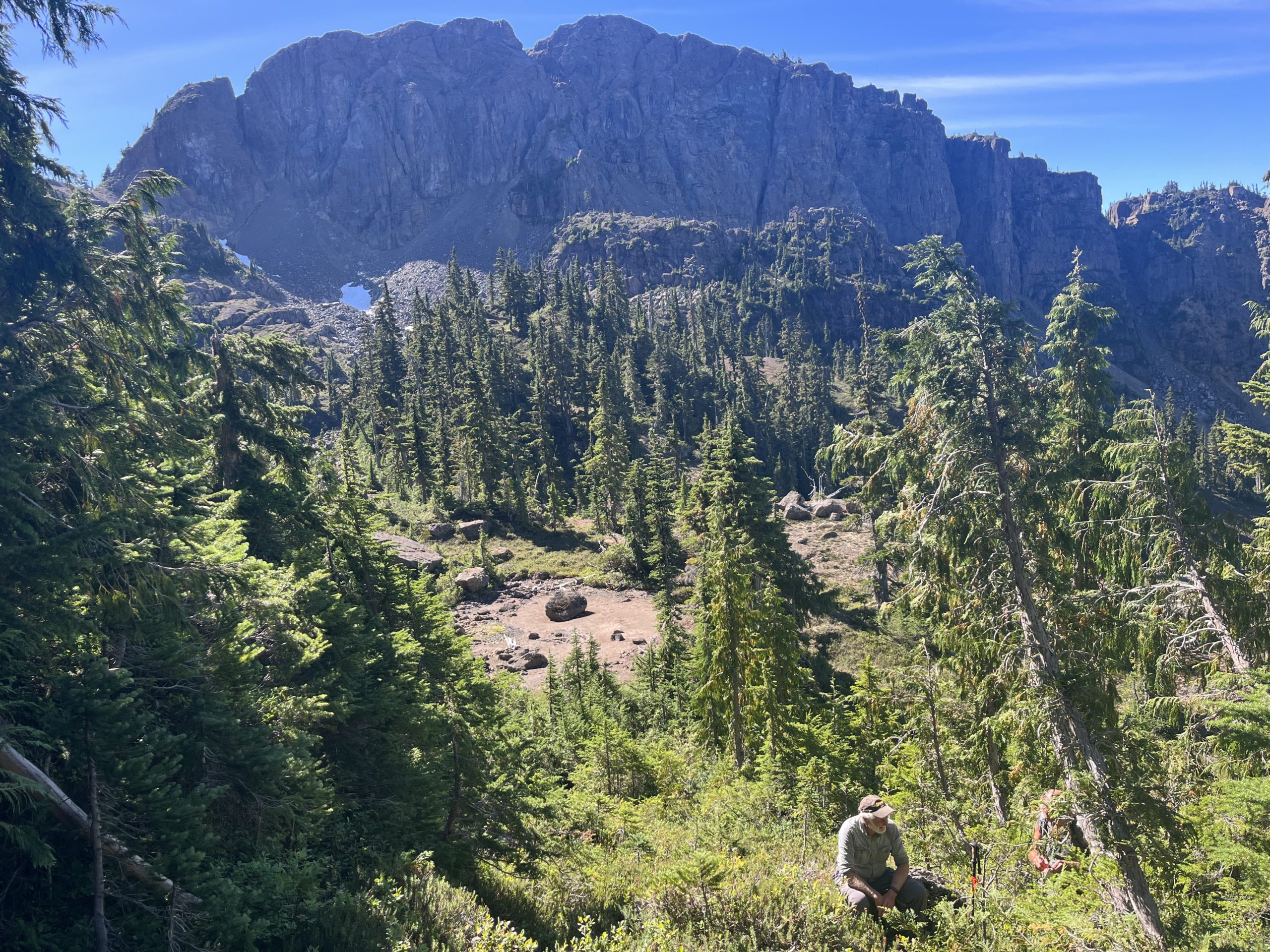 Steve and the Big Hazard Behind

Nevertheless, the views of that wall of rock from Lost Pole Lake (so-called because Terry lost his pole in the area one time when he was maintaining trail) were breathtaking. 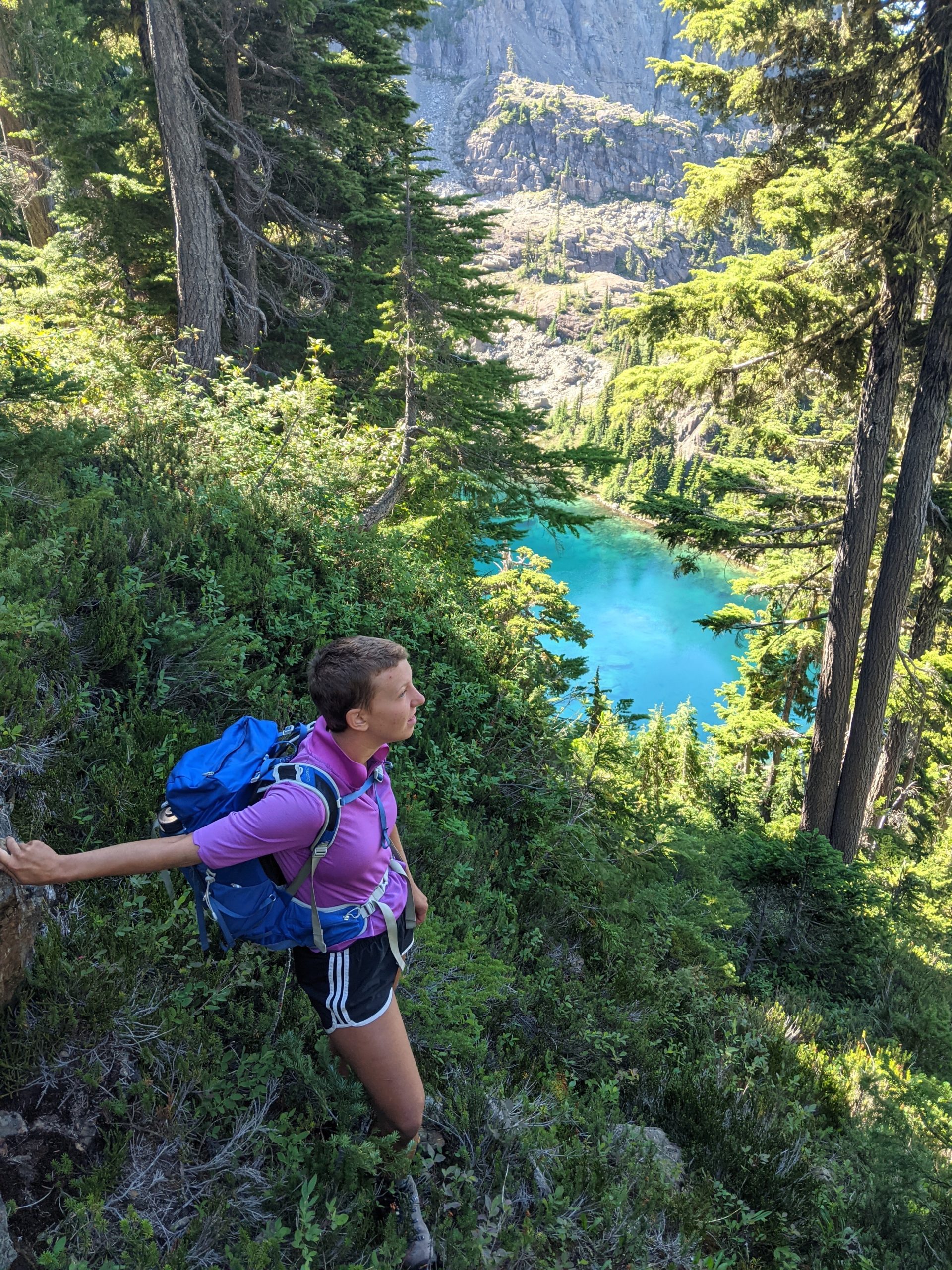 Steve had packed a few orange flashers and a screwdriver, and so along the way we made a few stops to hang some more signage. Trudging through the heather and blueberry, he commented on the need for some brush clearing and better marking, to which Terry replied that this wasn’t an ‘Alberni trail’ – meaning, I assume, that it wasn’t fair to apply the standards of the more well-groomed trails of Steve’s locale to this more remote and difficult-to-access area. Later, Steve agreed this was indeed a ‘Terry trail’ – more of a rough route than anything else. It had little accommodation for the human traveller, with bluff scrambles and slippery slopes. 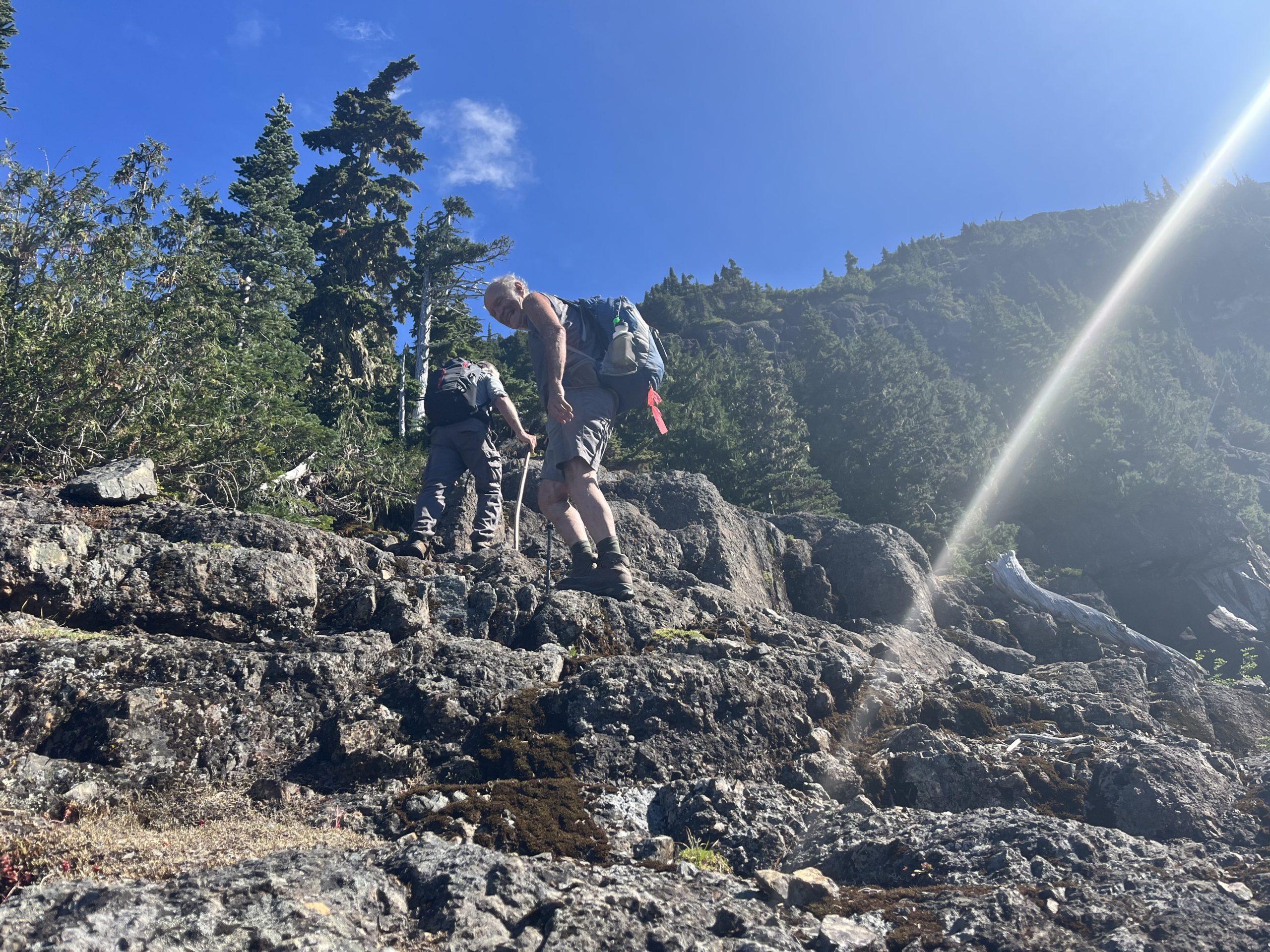 However, even with these challenges, the day’s hike was not as difficult or scary as I was expecting. It was steep, but not as steep as the part of the cliff bypass trail I had issues with. It was a little frustrating to realize that if only I had not taken that fateful wrong turn, I could have turned the corner and handled the rest of this ridge just fine. Oh well – shit happens out there, and besides, it created the opportunity for this awesome day trip!

A final upward push past Lost Pole Lake took us to the height of the ridge, and we drank in views from all around. To the east, Mt McBride and the silvery plateau of marble meadows across Buttle Lake, with the red smoke of the Wolf Creek fire hanging below. 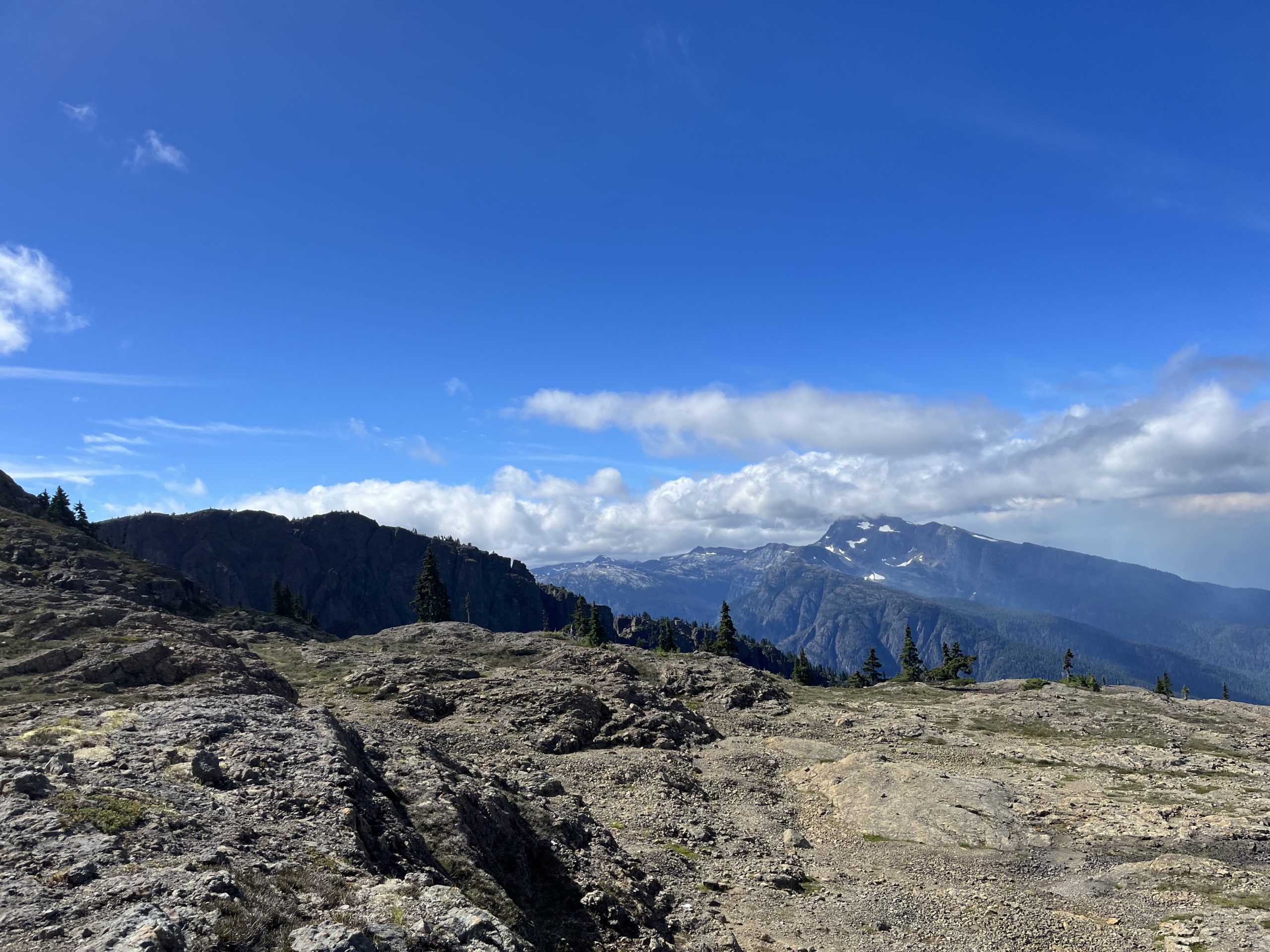 To the south, Mt Adrian, Alexandra Peak, and even Mt Jutland could be seen. 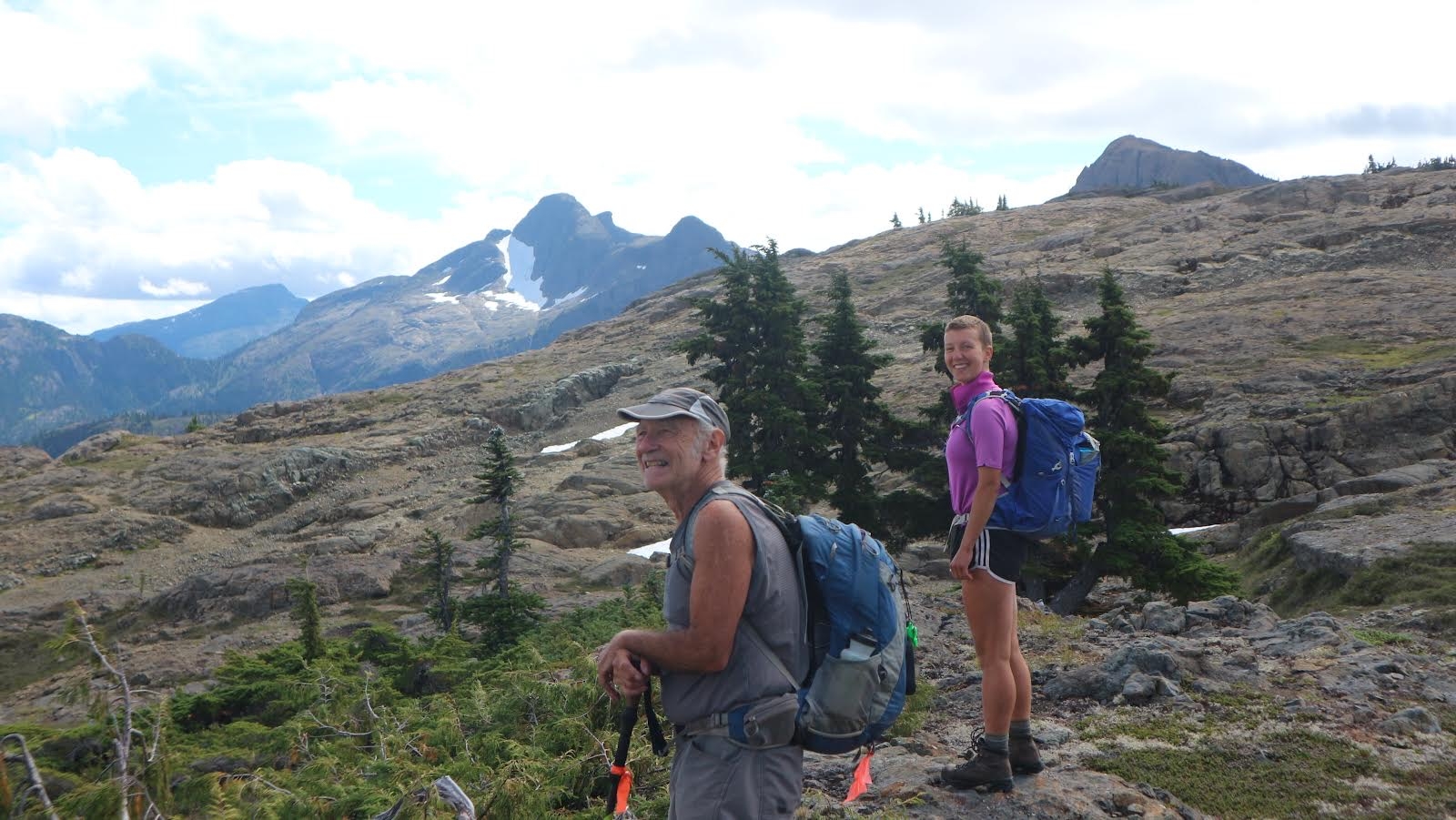 As we made our way north along the dry brown spine of the land, the coast mountains and the islands in the straight were revealed to the west.

Stopping just underneath the hulk of Mt Beadnell, we ogled at the curve of the land as it fell into Beadnell Lake. I learned there was a cabin on the lake, and made a mental note to come back and visit one day. Honestly, getting a taste of the crazy beauty of the Van Isle Ranges has inspired me to come back and explore them more, both within Strathcona Park and beyond. Even though I’ve hiked the length of the island, there still seems to be so much more to see! 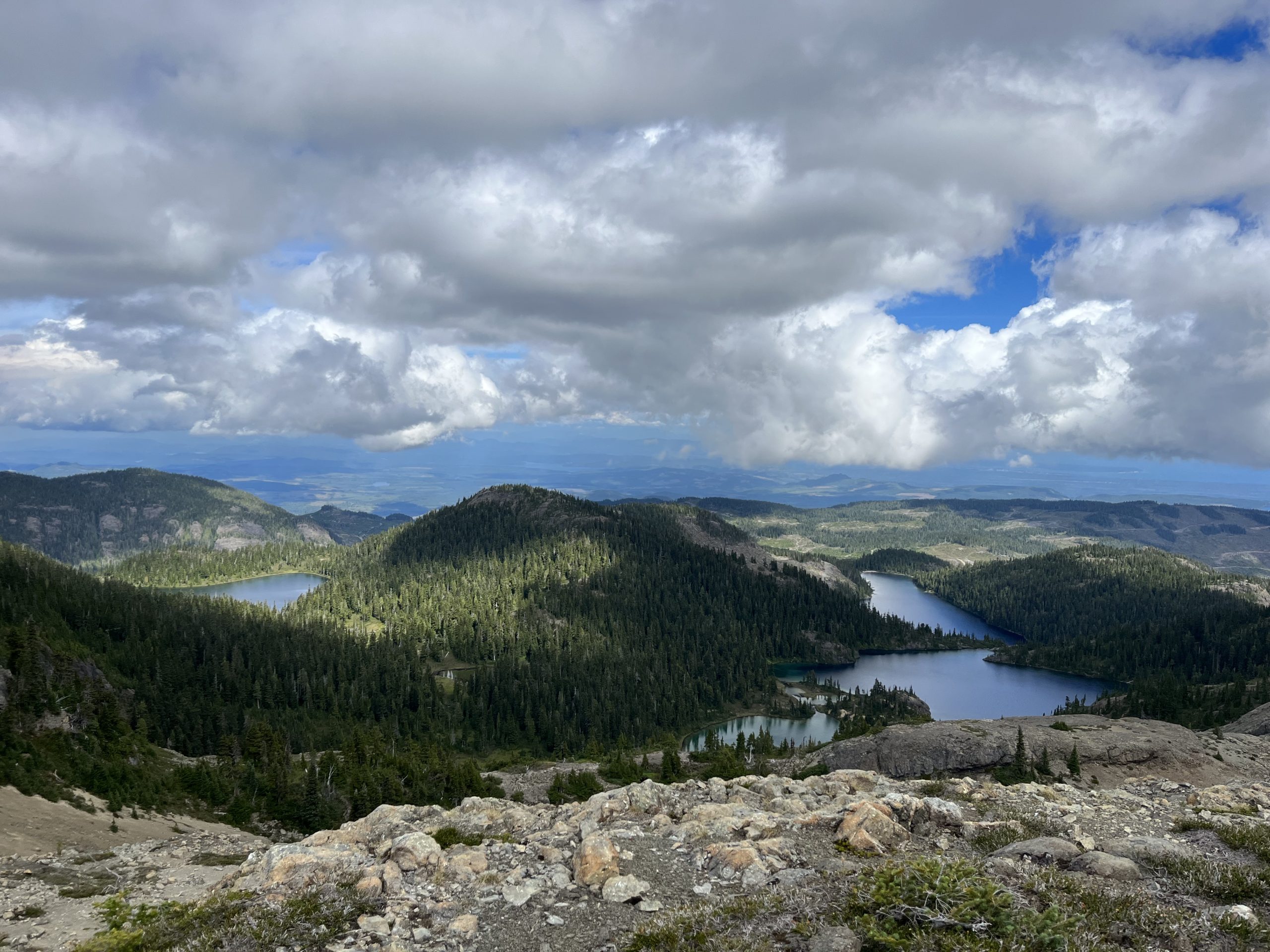 Arcing around the west side of Mt Beadnell’s summit, we soon noticed the disappearance of the cairns, and the appearance of an ominous drop-off ahead. With uncertainty, we inched forward, wondering whether we had taken a wrong turn – even though all our maps told us we were on the right track. But the lumpiness of the land and its obfuscation of what lay ahead had conjured up fears that were unfounded, as the downward slope beyond was hike-able. Just past that knee-stiffening ordeal was another cabin built by the snowmobilers’ club. We left a note in the guest book, alongside a page of entries from VIT thru-hikers past. 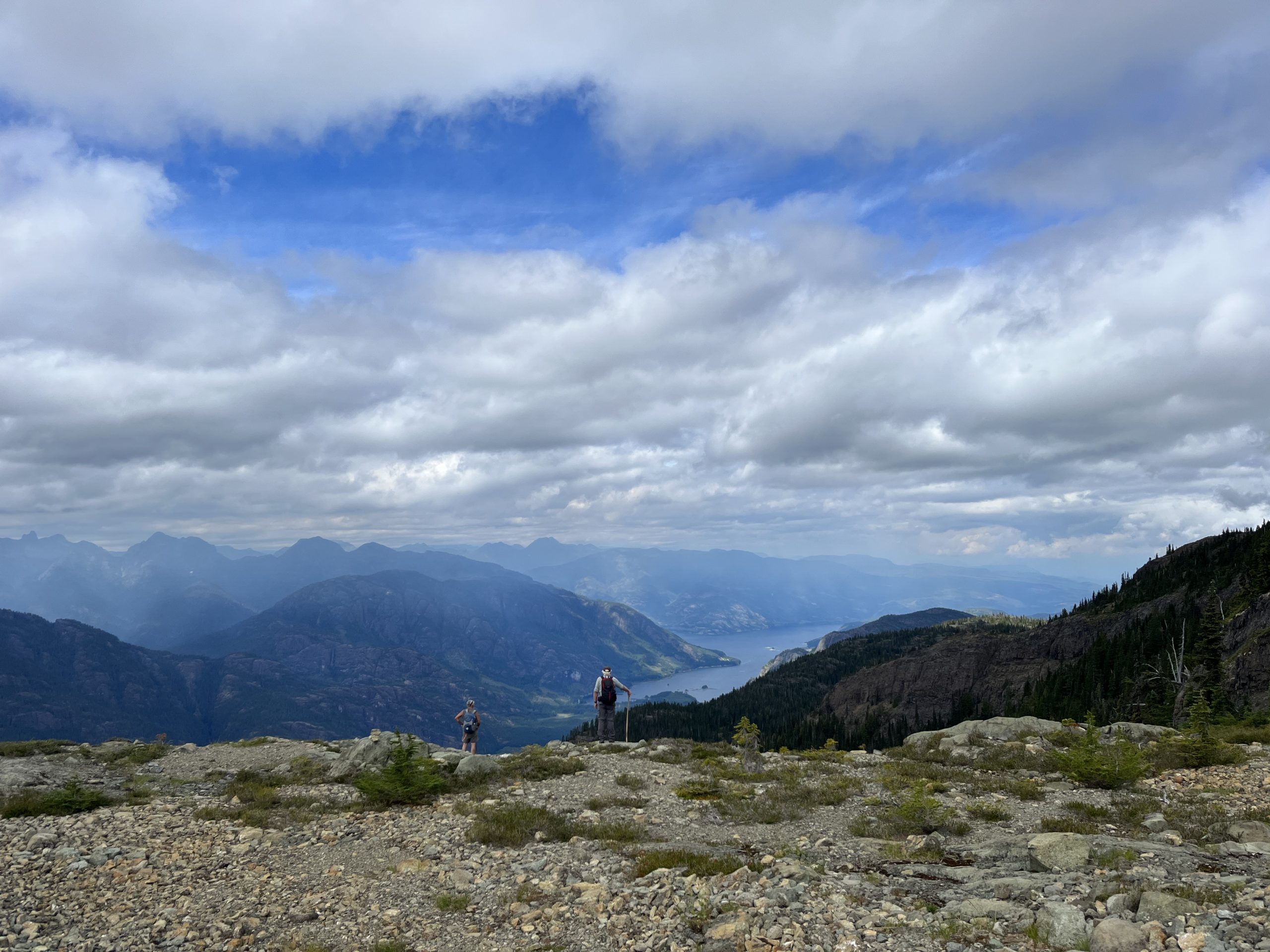 The drop-off that was not a drop-off

The pace began to slow after the cabin, and breaks became more frequent as the day wore on. Though it wasn’t really my usual style, I was just glad to be out there, so I was happy to adapt to the speed of the group. I mostly kept up the rear, and stopped at every blueberry and huckleberry bush I saw, picking juicy handfuls before catching back up to the others.

The ridge to Lupin Mountain was wetter and lusher, and our views were gradually obscured in a sea of green. I recognised the characteristic leaves of the lupin plant popping up around the tarns. The bonus of hiking with older, wiser people than yourself is getting to pull from their wider knowledge of the world. I learned about valerian, arnica, and fringed grass of Parnassus, as well as white pine and yellow cedar and the difference between Amabilis and subalpine firs. 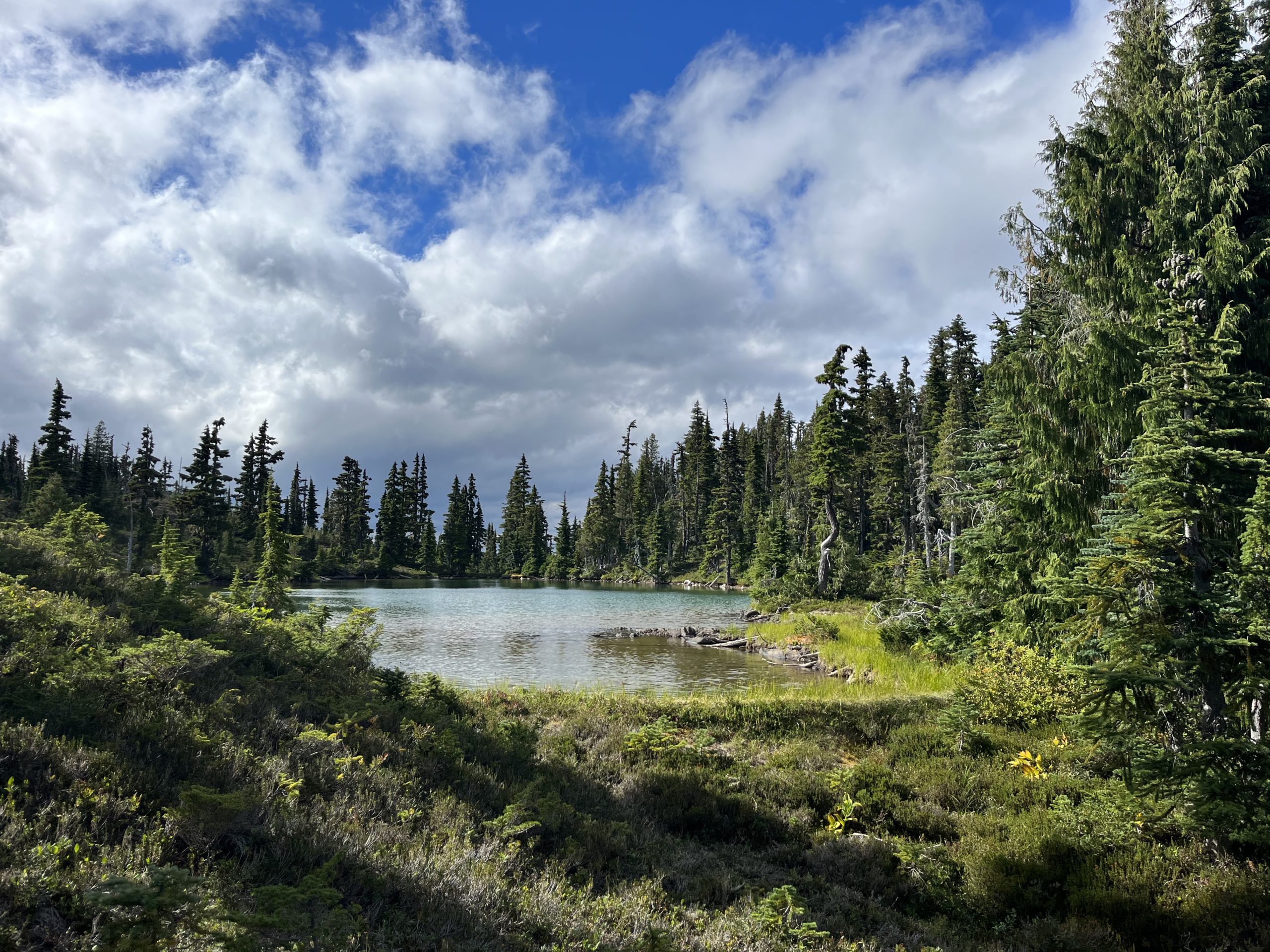 a tarn (or lake?) atop Lupin ridge/mountain

Suddenly, a yell – I looked up to see Terry take a tumble. He hit his head on a log, and blood was gushing down his face. It was pretty gruesome, and looked painful, even though he insisted he was fine. (I was skeptical when he asked where his hat was, and I pointed to it in his hand). Luckily, with Steve’s first aid kit, we cleaned up the deep gash and band-aided it, and carried right on. (Later, he’d end up getting stitches and a tetanus shot). After that, in our fatigued state, I became more vigilant about tripping hazards in the trail-less forest.

With no flashers to be found, we followed Terry’s waypoints between the two summits of the mountain to greet the marked trail going down the north side. Then, views of Upper Quinsam Lake to the north! All that was left was to descend through the forest and across a smattering of cutblocks to an overgrown road that would take us to Steve’s car. 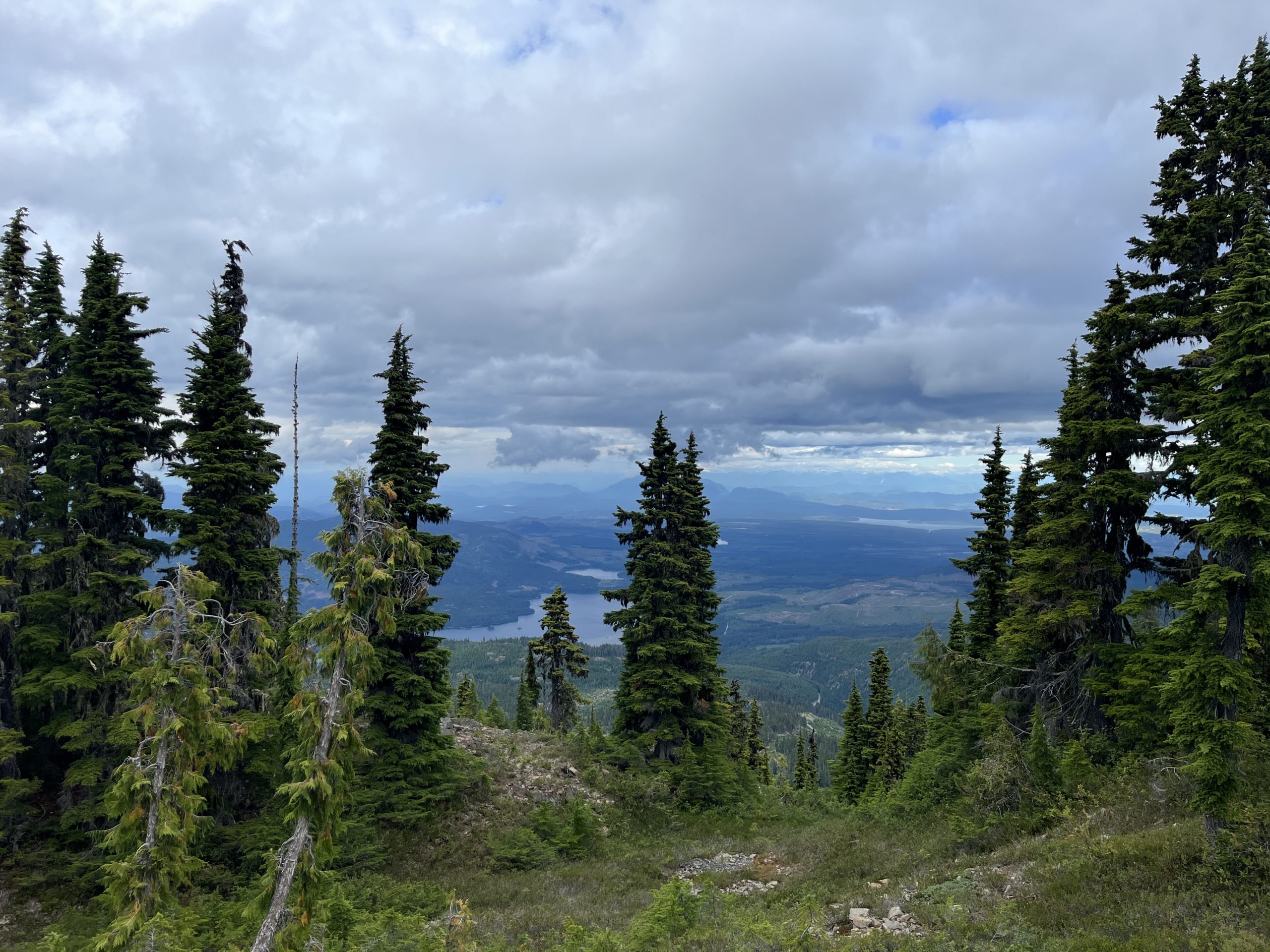 all downhill from here

Many blueberries, one precarious rockfall, and one bear sighting later, we finally ended up at the road. As we walked the easy switchbacks down, we saw evidence of David’s clearing work from earlier in the day. Thank you David, for saving us from scraping around the alders on the last stretch! 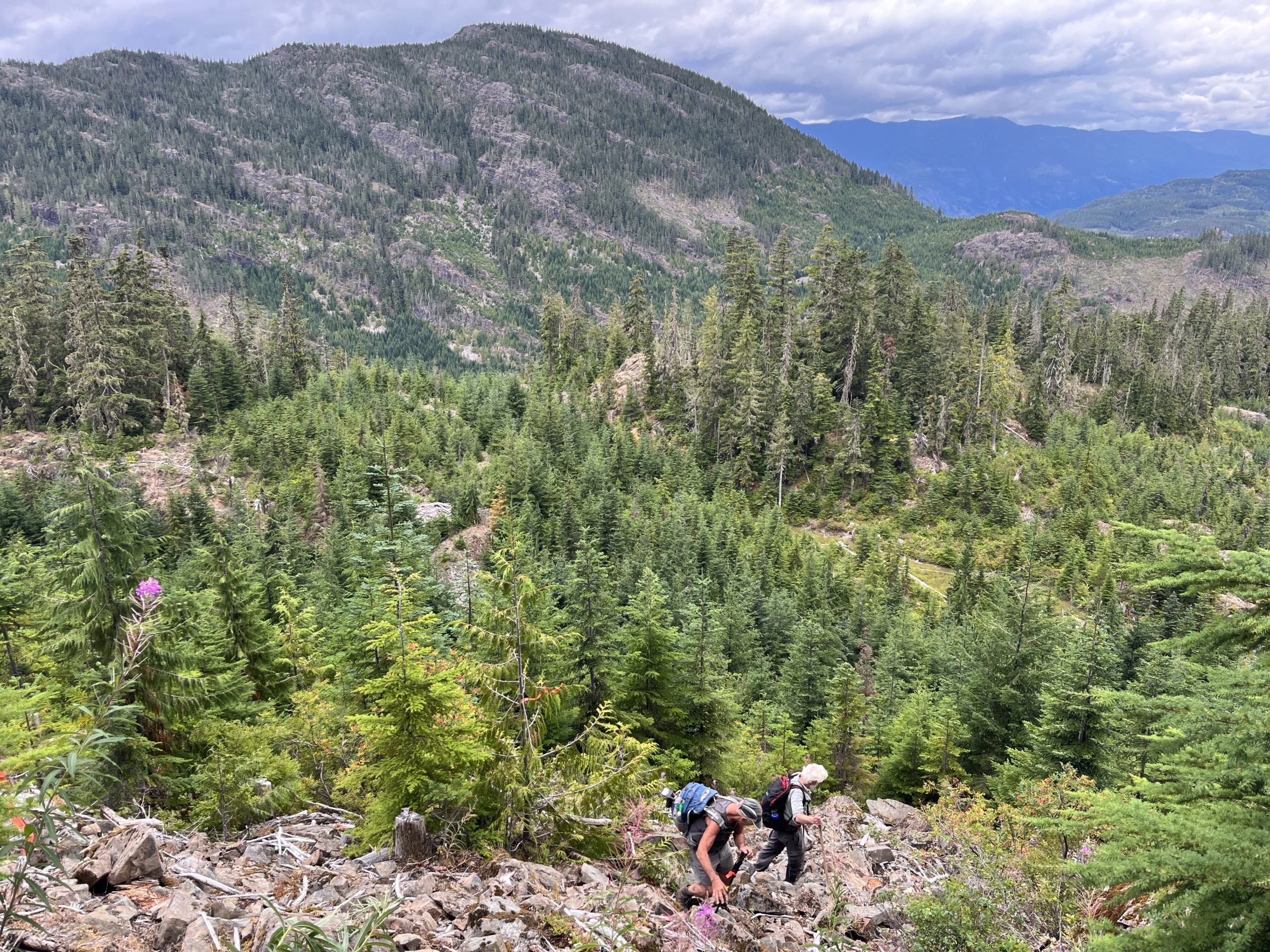 down some slippy rocks into a planted cutblock

10 hours and 20.8kms later, we piled in the car for a silent, exhausted, but triumphant ride home. It was a great day, and a great way to (finally) end my hike (for real this time). Thank you again to the VITA volunteers who make this trail a reality, and for helping me to finish my two missing mountains. And thanks to you readers for following along!