Becoming a parent is a game-changing experience. With all the joy and happiness also comes responsibility. If you’re a new mom or dad, you’re probably wondering when you’ll get back outside or check off that trail that’s been high on your to-do list. And if backpacking is your passion, you’ll want to know how to hit the trail with your little one as soon as possible. We chatted with experienced hiking parents to get their top advice for backpacking with babies.

1. Hope for the Best, Plan for the Worst

“Plan ahead and prepare for the worst-case scenario,” says mom and thru-hiker Bekah Quirin. “(H)ave hope that it will go well, but also know that they might cry all night or the weather could be awful.”

If Bekah’s name sounds familiar to you, you’re not alone. In 2017, she and her husband, Derrick, made headlines when they set out to hike the Appalachian Trail with their one-year-old daughter, Ellie. The hike brought plenty of attention to the family, but also included more intimate moments—like when Ellie took her first steps on the AT in Maine.

“We both had full-time jobs and we had just bought a house… a year before we had decided,” explains Quirin on her and her family’s choice to trek the more than 2,000 miles. “We just realized that there’s a little bit more to this and while we only have one child and while we don’t have a lot of commitments, why don’t we go ahead and sell the house and go and attempt to thru-hike?” 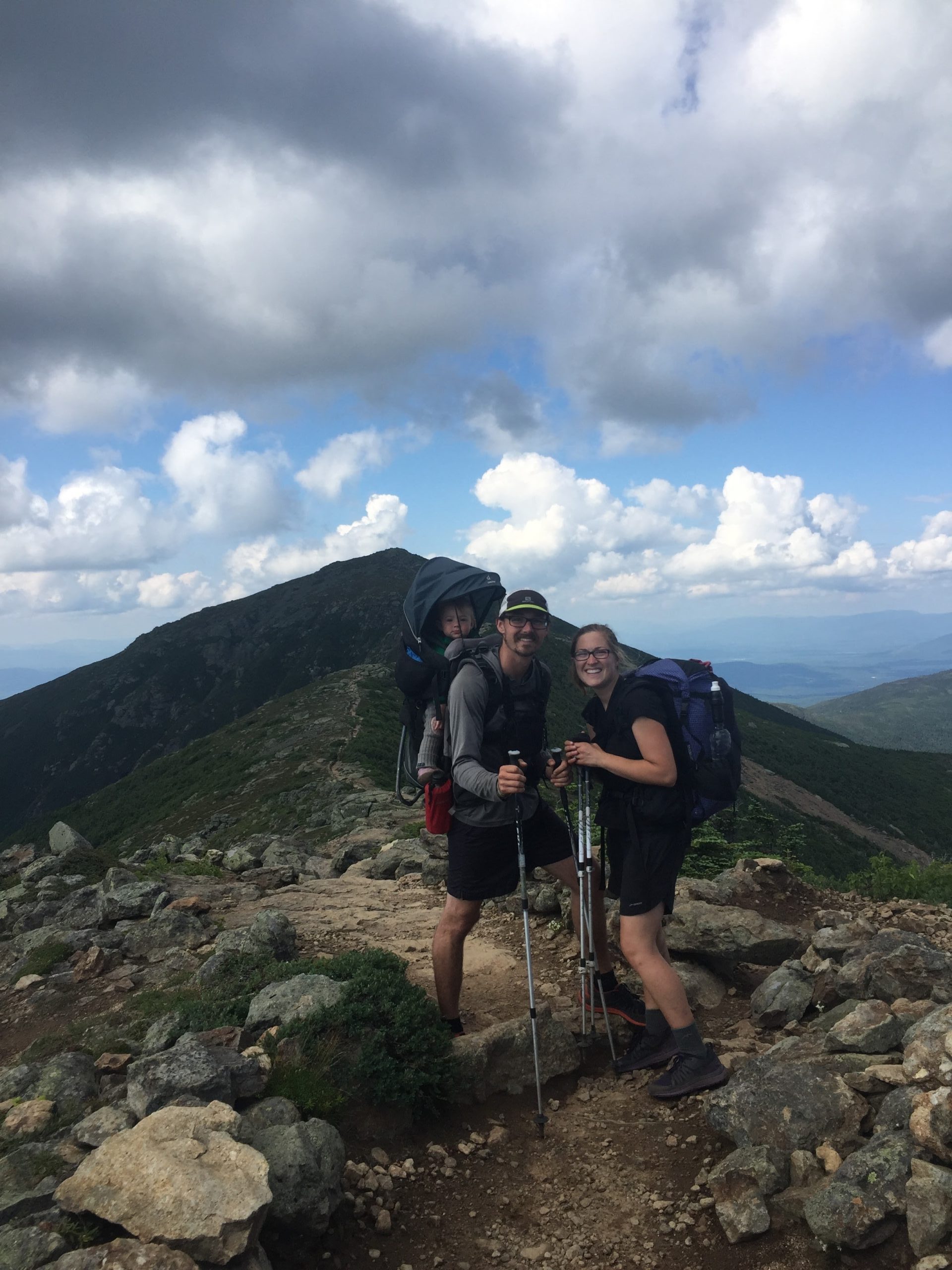 Quirin says the trail included both highs and lows. She advises new parents on the trail to just go with the flow.

“Just be prepared to have a positive attitude and just really enjoy it no matter what happens, and if it’s a flop and you end up going home in the middle of the night, it’s no big deal.”

2. It’s About the Journey, Not the Destination

Taking your one-year-old on the Appalachian Trail may be an extreme way to keep your hiking passion alive, but there’s plenty you can do closer to home to get back outside with a little one.

“I had to learn pretty early on with my kids that it’s not always so much about the destination anymore,” says Bobby Marko, founder of the popular Facebook page Backpacking with Babies and Kids. “It’s more about making it an enjoyable experience for everybody because nobody wants to be on a death march, that’s how you teach your kids to not like being outside.”

Marko says he started his Facebook page after seeking advice on taking his first child on the John Muir Trail. What he found online was a lot of negative comments and not a lot of help. That’s when he launched the page in hopes of at least speaking to a few other parents. Now the page has almost 10,000 followers. Members debate about gear advice and the best ways to get outside on a daily basis. The discussions can sometimes get heated, but overall, it’s a safe place for anyone looking to continue their love of the outdoors. Backpacking parents do exist: you just have to reach out and find them.

4. Get the Right Gear for Backpacking with Babies

Marko has become somewhat of an expert on getting kids outside by running his Facebook page and hearing what both new and experienced hikers have to say.  A lot of topics are covered in the group, but Marko says the three biggest discussions are packs, sleep setups, and (of course) diapers. 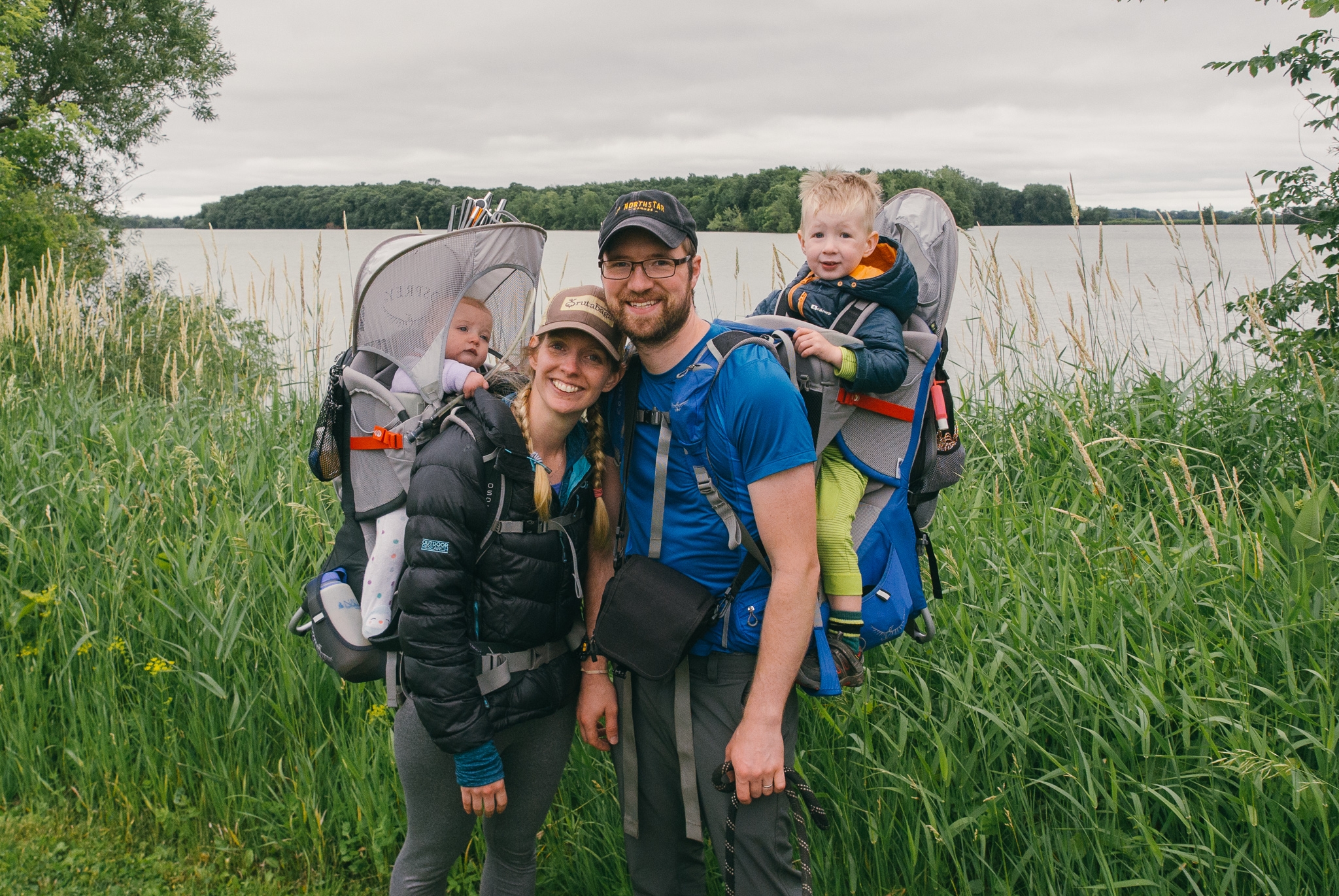 “With packs, my best advice is to try it on,” says Marko. “What works for you isn’t going to work for someone else. You’ll see (group members) post a lot like, ‘Osprey Poco is the best pack’ and you’ll see responses like, ‘That thing is the worst! Why are you recommending it?’ ”

Marko says his family does use the Osprey Poco child carrier when backpacking. They love the amount of storage it offers, but he stresses that everyone’s needs are different. There are a number of factors that will influence a family’s ultimate choice, especially the age of the child and the size of the parent. For instance, hikers will have to use a soft carrier for newborns, until they get strong enough to support themselves and can transition into a more traditional backpack.

Tip: keep your base weight low. Parents should also consider how much additional gear they’ll be bringing. It’s tough to keep your pack lightweight once you add a literal baby to your base weight, but it’s not impossible. Marko says he was able to dial back his weight for his family after hitting 50 pounds between two packs by making small adjustments.

Meanwhile, the Quirins shaved weight by opting for an ultralight tent and paring down unnecessary items. “Anything that was baby specific, that was toys, books, anything like that (was) totally unnecessary,” says Quirin of their AT hike. “We had a couple of things like that… that we sent home because she would rather play with sticks and rocks.”

The best sleep system for backpacking with babies is a topic of much debate due to both weight and safety. Most arguments center around whether or not to co-sleep. While a decent percentage of American families do share a bed with infants, the American Academy of Pediatrics is against the practice over concerns of sudden infant death syndrome (SIDS).

So what works best to make sure everyone sleeps safe and sound? It depends on what you feel comfortable with.

“For us, we didn’t co-sleep at home, our daughter was always in a crib, but when we would go camping she would have her own sleeping bag and she would sleep on a sleeping pad next to use,” says Marko on what worked best for them. “So basically, we would put our inflatable sleeping pad across the tent and it would cover the whole bottom and there weren’t any cracks or anything to fall into.”

Marko recommends Milk and Honey’s Down Sleep Sack because it only weighs 10 ounces. Morrison Outdoors also sells a number of popular options to keep kids warm.

For those who want to keep their child in one place at night, a lot of hikers on the Facebook page use what’s called a PeaPod by KidCo. It’s basically a popup bassinet, but again that comes with a tradeoff for weight.

When asked about a low point while hiking the AT, Bekah Quirin is quick to say, “Diapers.”

Bobby Marko says this is another case when you have to do what works best for you. Some opt for disposable diapers. If it’s a short enough hike, the weight of disposables isn’t too bad, but you do have to pack them out. Others favor reusable or cloth diapers, but they come with the work of cleaning and drying on trail.


5. Remember That Timing is Everything

A ten-month-old may be more than happy to sit in a backpack all day, but it may be harder to keep them contained after they’ve mastered walking. A few years later, they’ll be able to crush some miles themselves and carry some of their own gear.

“It’s been interesting as the kids have gotten older now,  they don’t fit in the framed carrier anymore, probably around age three or four, once they hit 30 pounds it sucks to really have them in there,” says Marko.

“So, we switched back to a soft-structured carrier which is nice because it’s lighter and we can pack it in our pack when the kids are walking.”

The age also changes what kind of trips you go on. After a few epic adventures, the Quirins are rethinking their trips now that Ellie is four.

“I really can’t imagine doing the trail now. I don’t think we could do it right now,” says Quirin on what has changed over three years. “(T)hat age window from the time they’re sitting up, which is when they can start sitting in a backpack, from like six months to one and a half is perfect timing for something like that. At least for long trips. Short trips is a different story (sic).”

6. Be Prepared for Epic Meltdowns

Again, it goes back to expectations and being prepared for anything, including that full-blown tantrum meltdown. Marko says he remembers his child’s first epic meltdown on trail.  It’s tough to have a beautiful mountain scene disrupted by a screaming kid, but he’s learned how to navigate around it.

“Probably not for a one-year-old, but a sucker, like a Dum Dum. Because it’s hard to complain when you got a sucker in your mouth, plus the sugar gives them energy for a bit,” says Marko. “So always having lots of snacks.”